The Westport and Tiverton baseball teams met for their first ever scrimmage game behind the former Westport High School on a cold and raw Wednesday afternoon. The Tigers won the seven inning game … 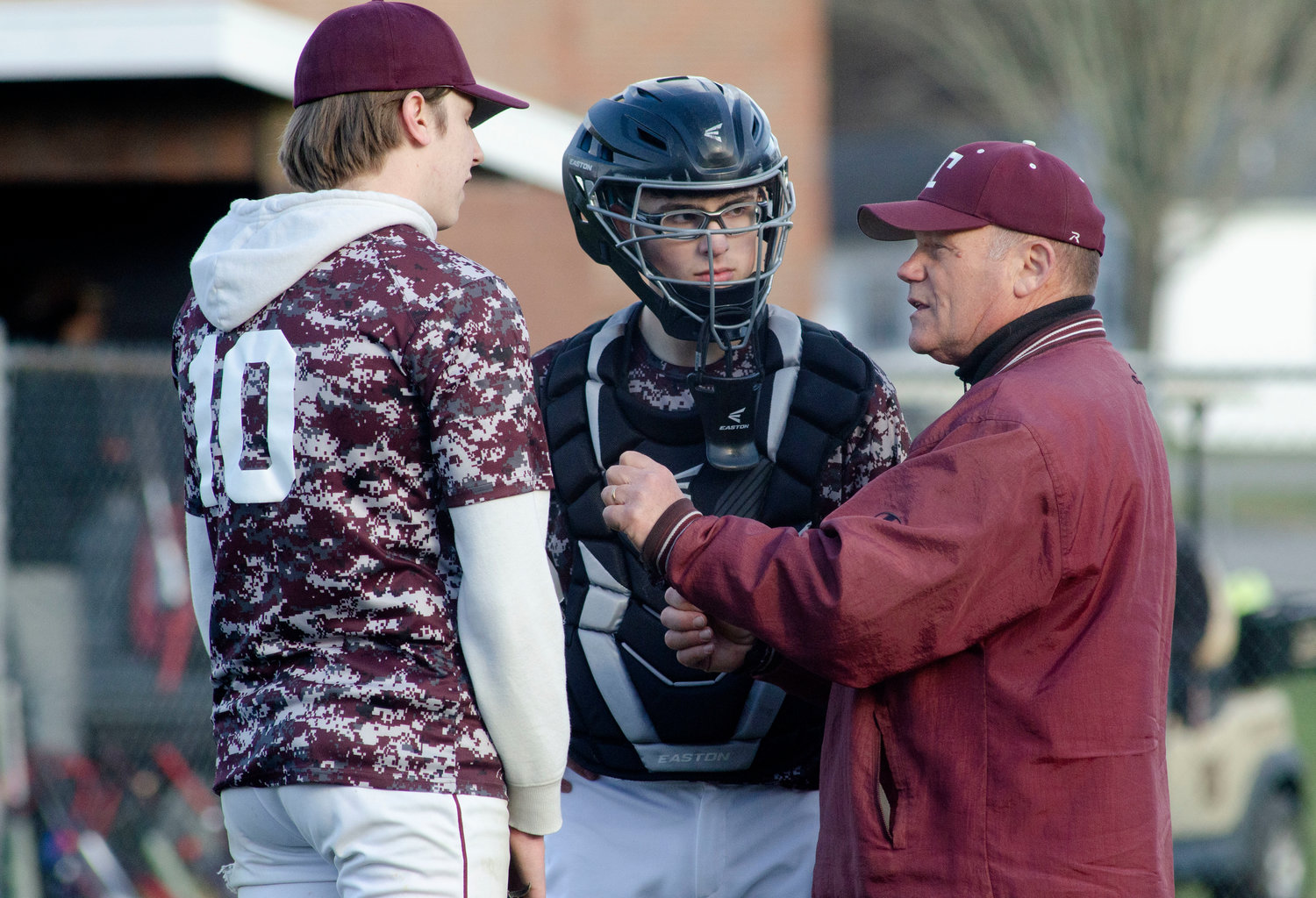 Tiverton head coach Bob Murray speaks to battery mates Devin Pieroni and Jordan Panell during the Tigers’ scrimmage game at Westport on Wednesday. Murray is retiring from teaching and coaching after the season.
Photos by Richard W. Dionne, Jr. 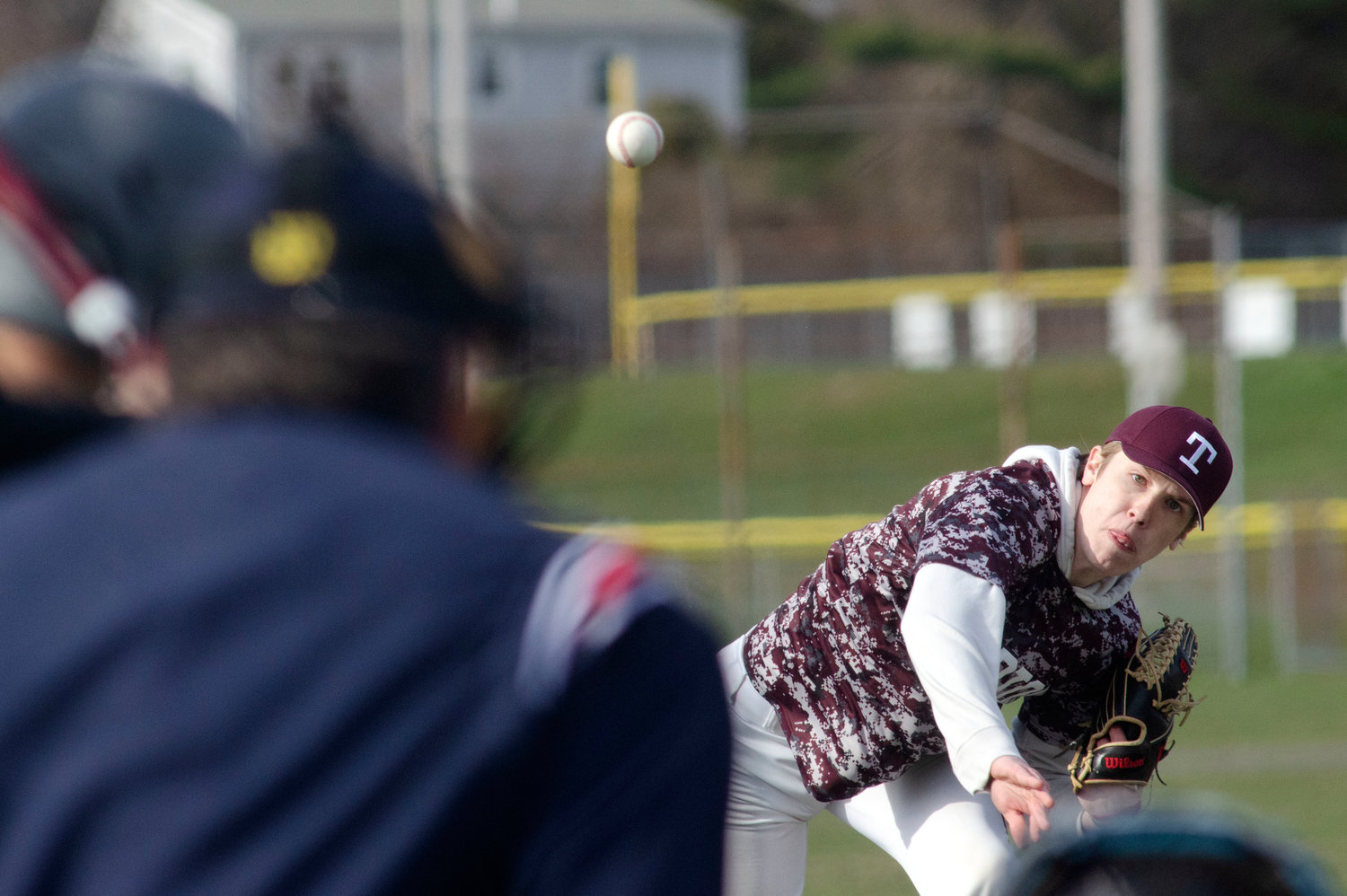 Senior pitcher Devin Pieroni hurls a fast ball during the Tigers' scrimmage against Westport on Wednesday. Pieroni will likely be the team's number two starter and hit in the middle of the lineup.
Photos by Richard W. Dionne, Jr. 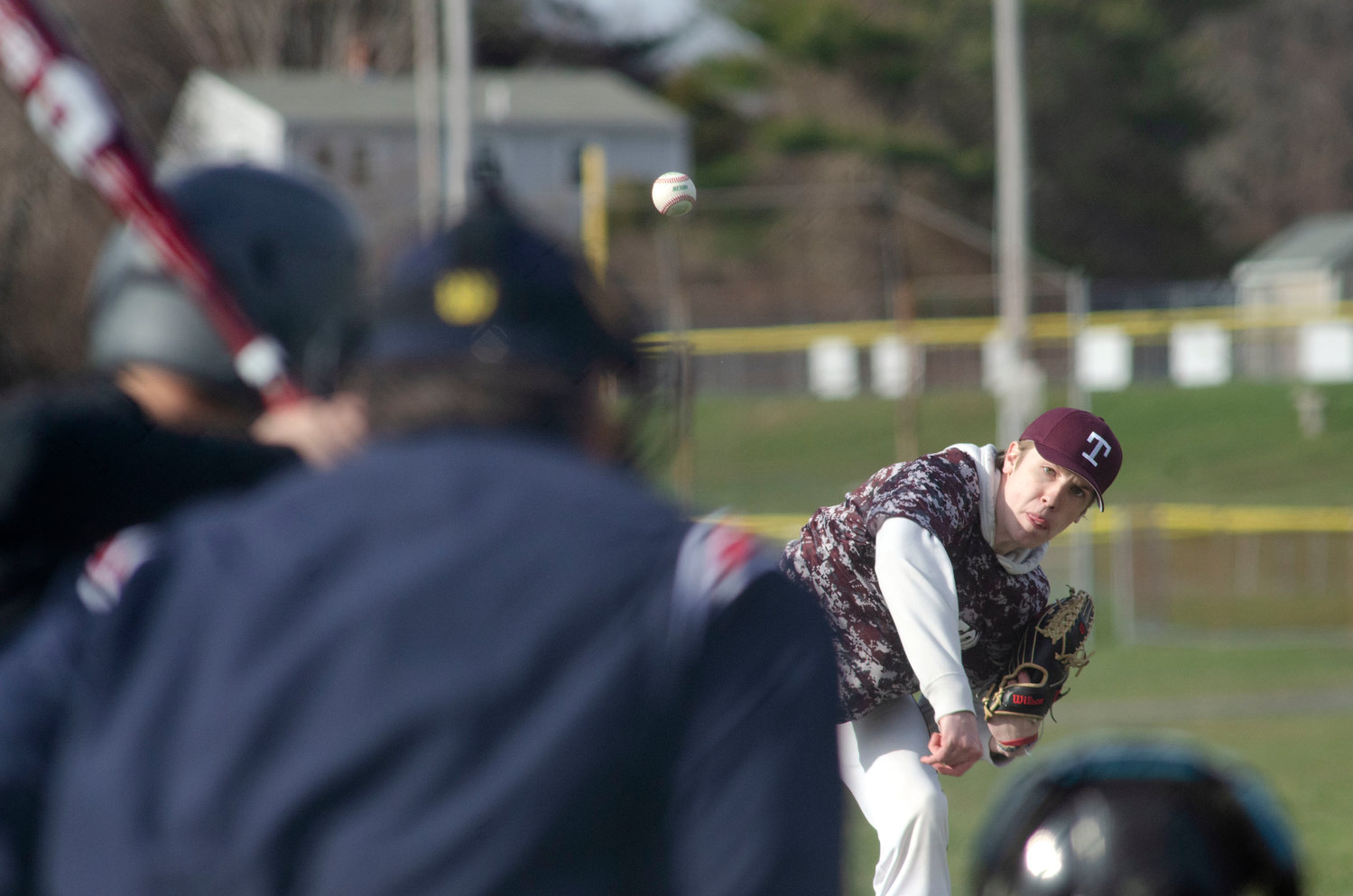 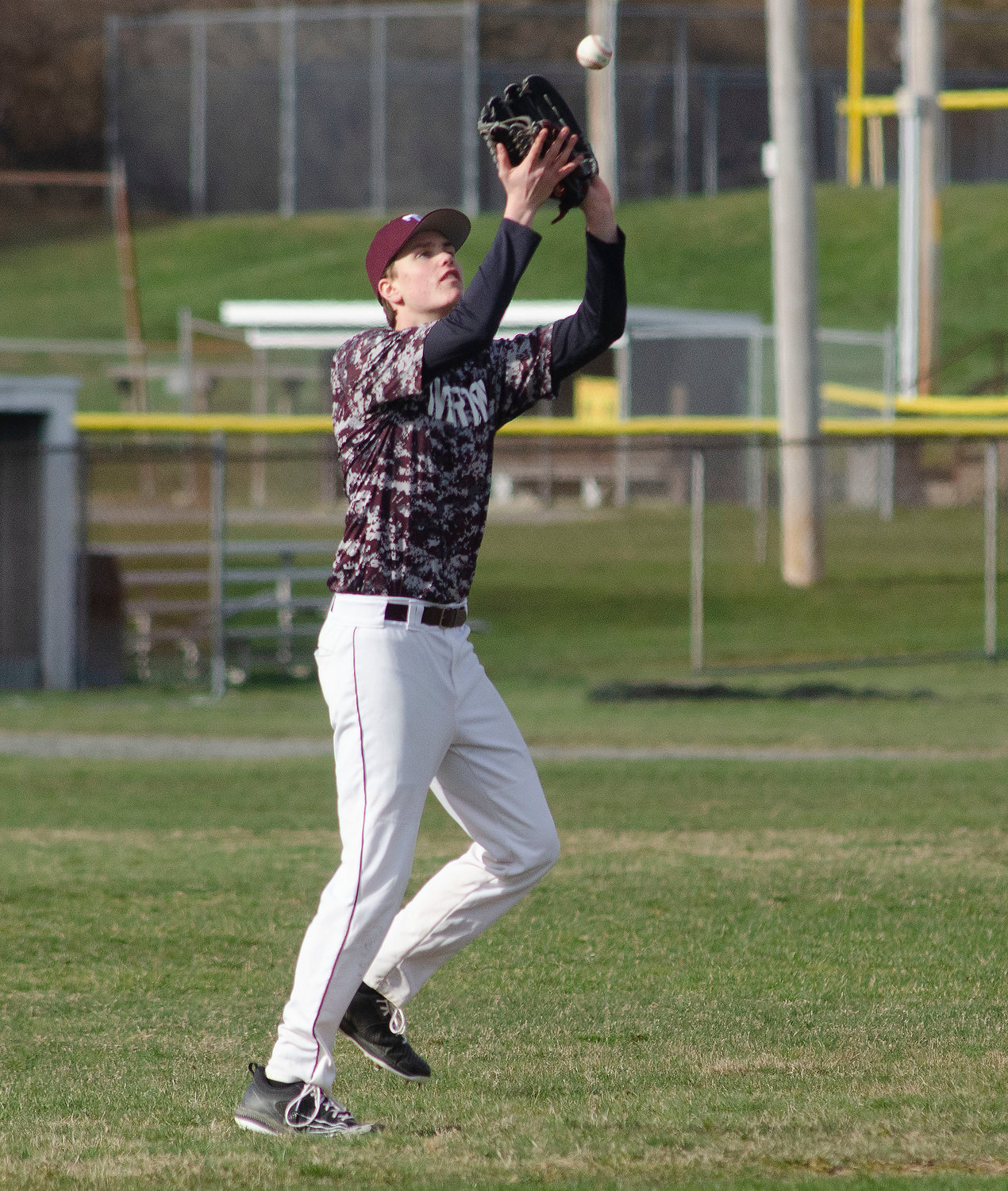 Left fielder Jason Potvin catches a flyball during the scrimmage. Potvin will be the team's ace this season.
Photos by Richard W. Dionne, Jr. 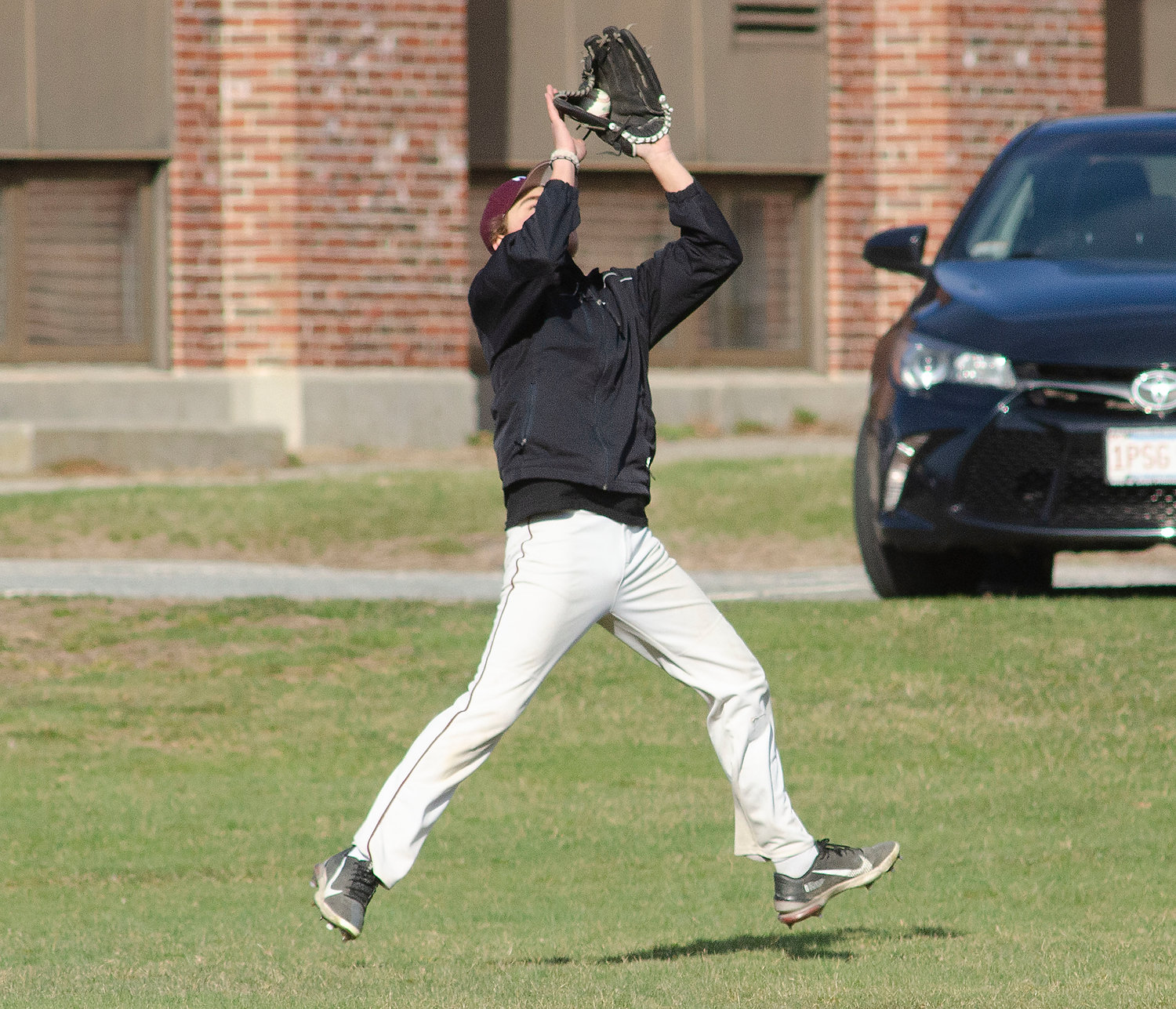 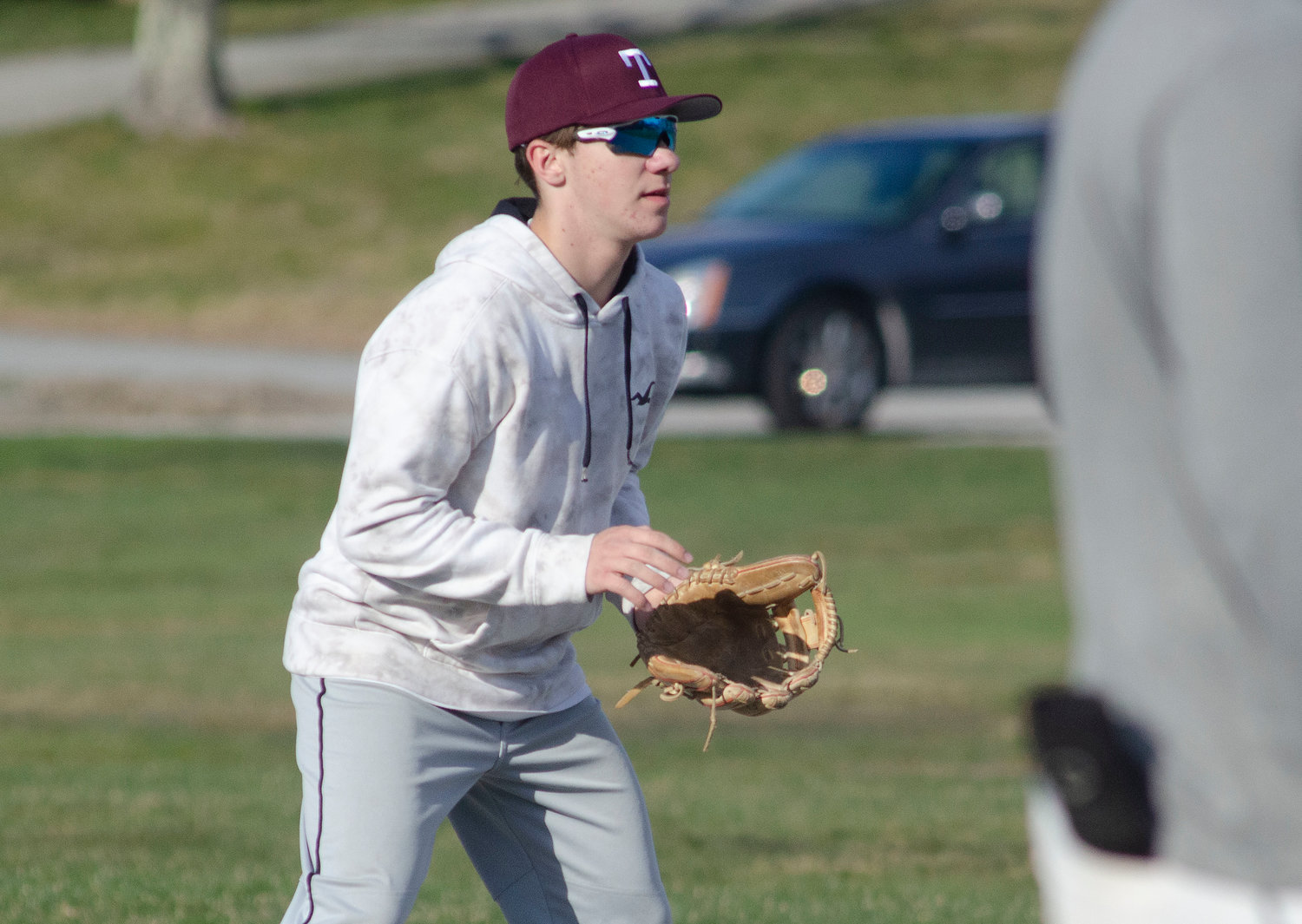 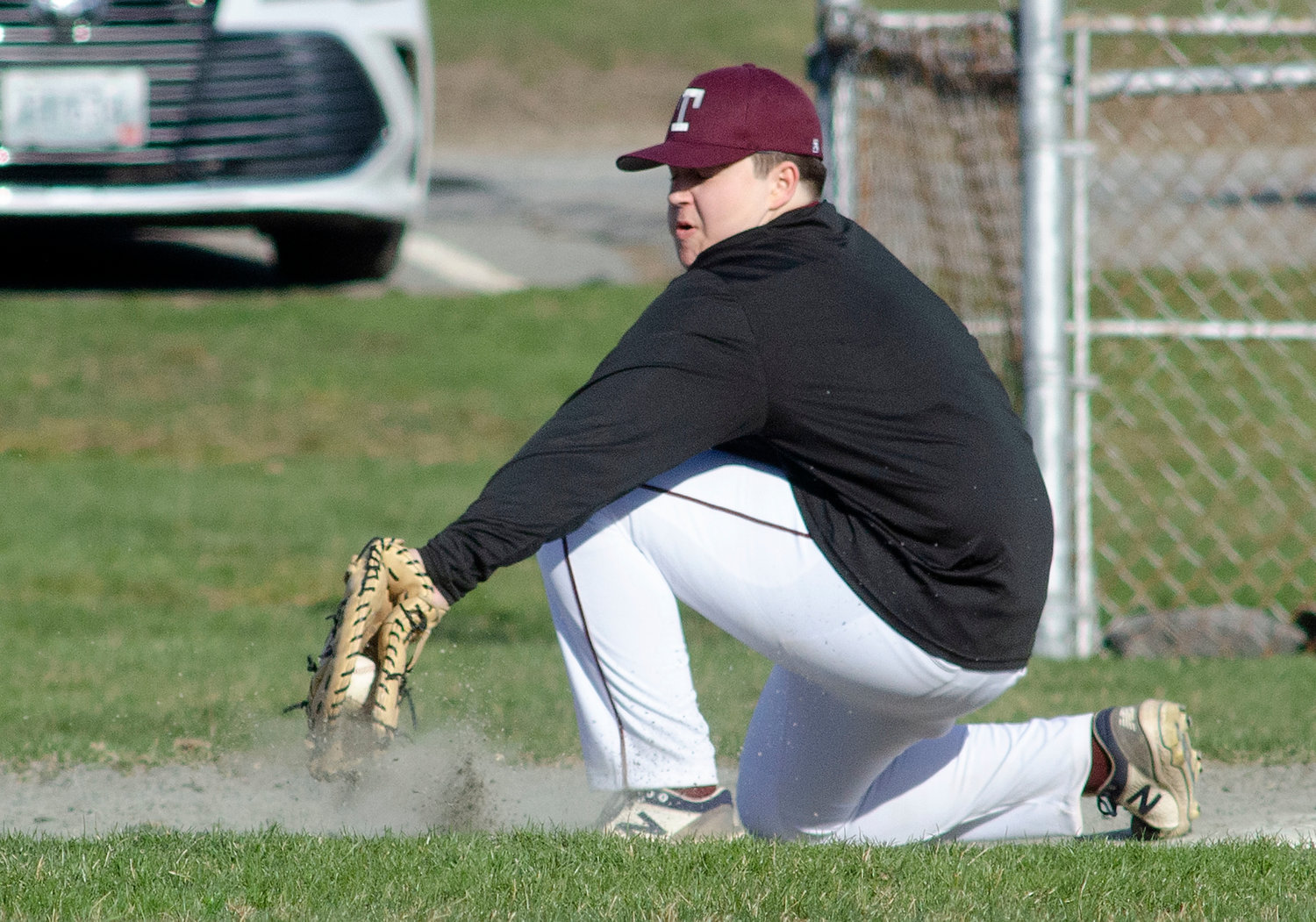 Freshman Kyle Rogers snares a throw in the dirt to record an out at first base.
Photos by Richard W. Dionne, Jr. 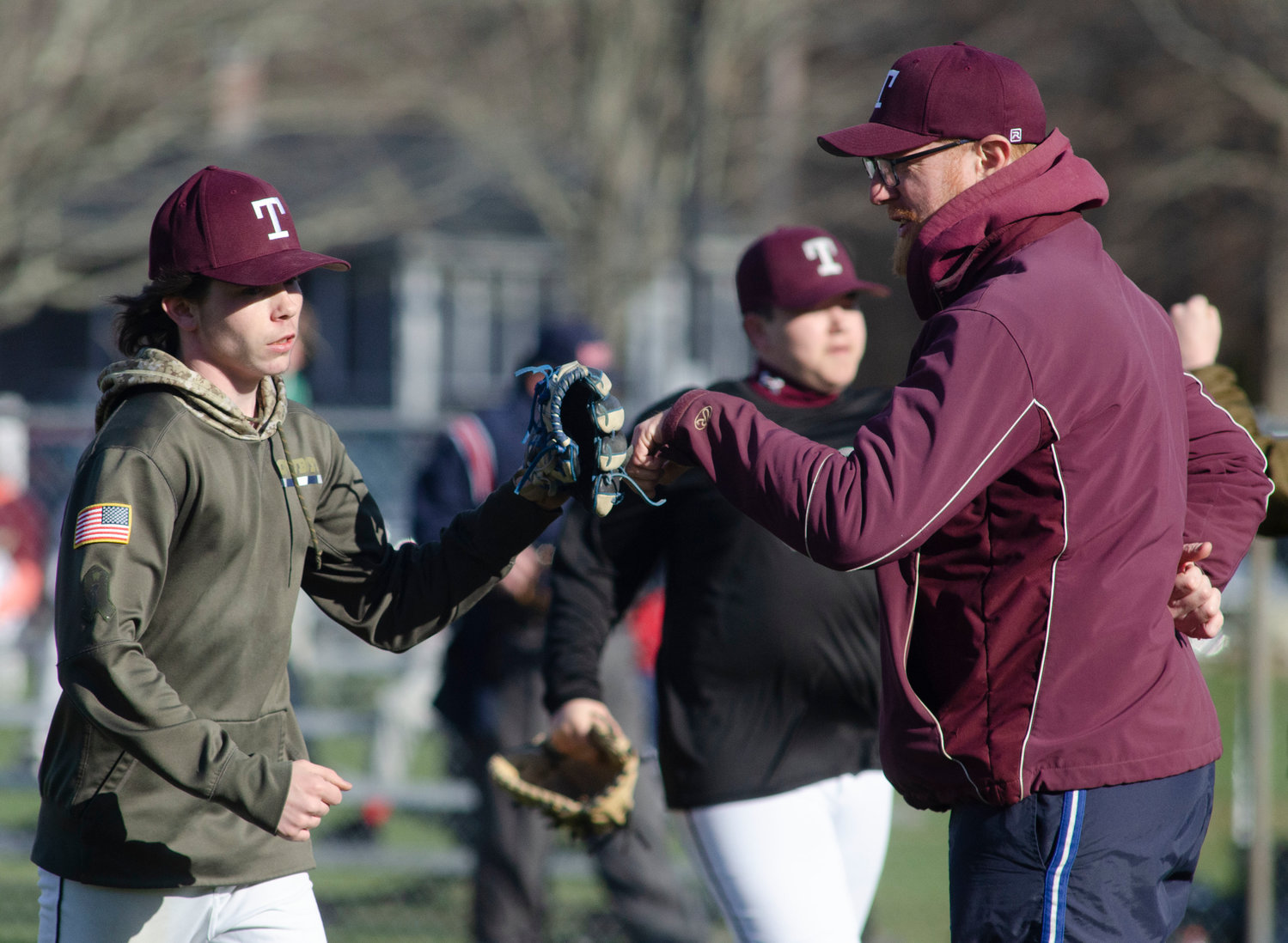 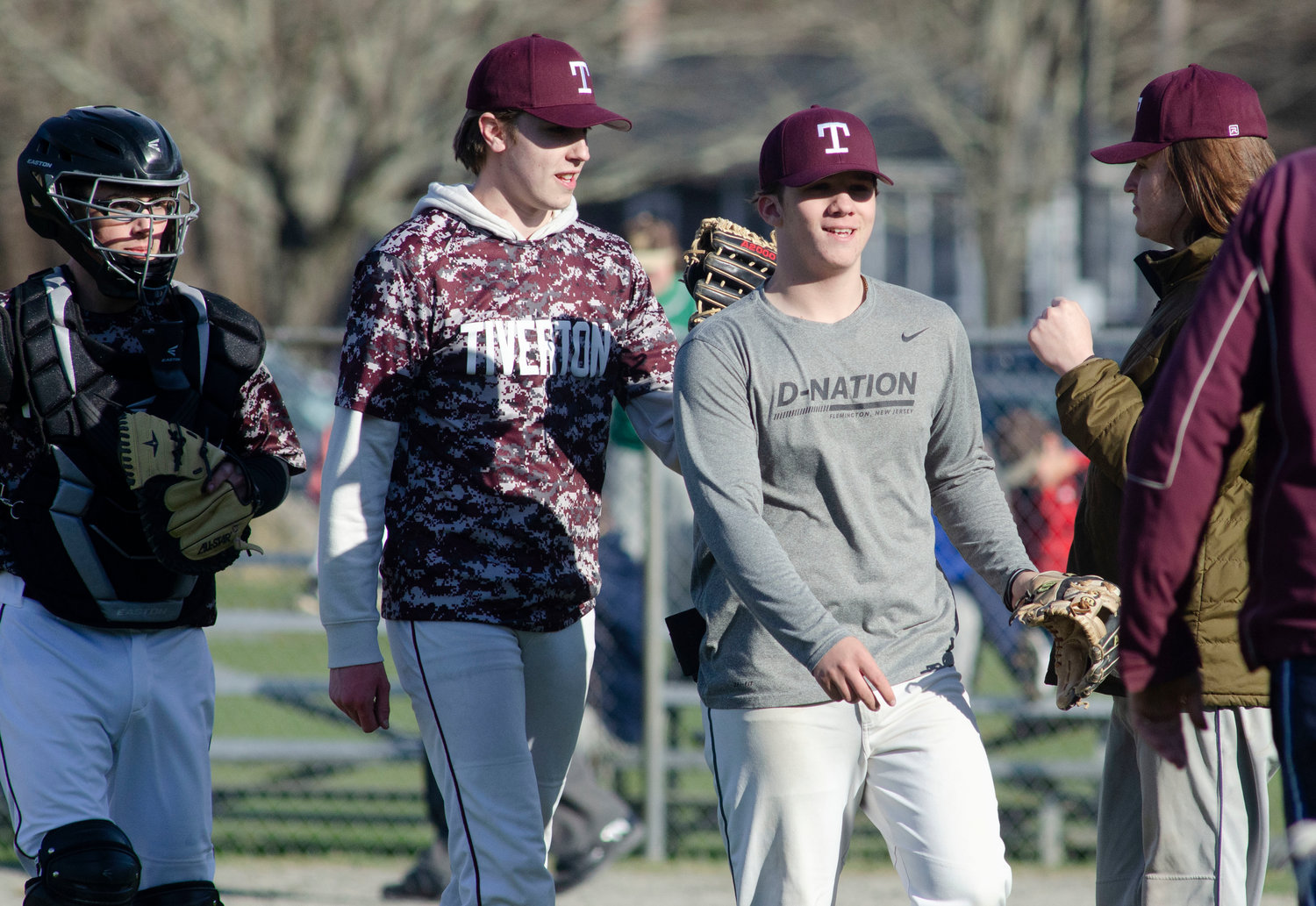 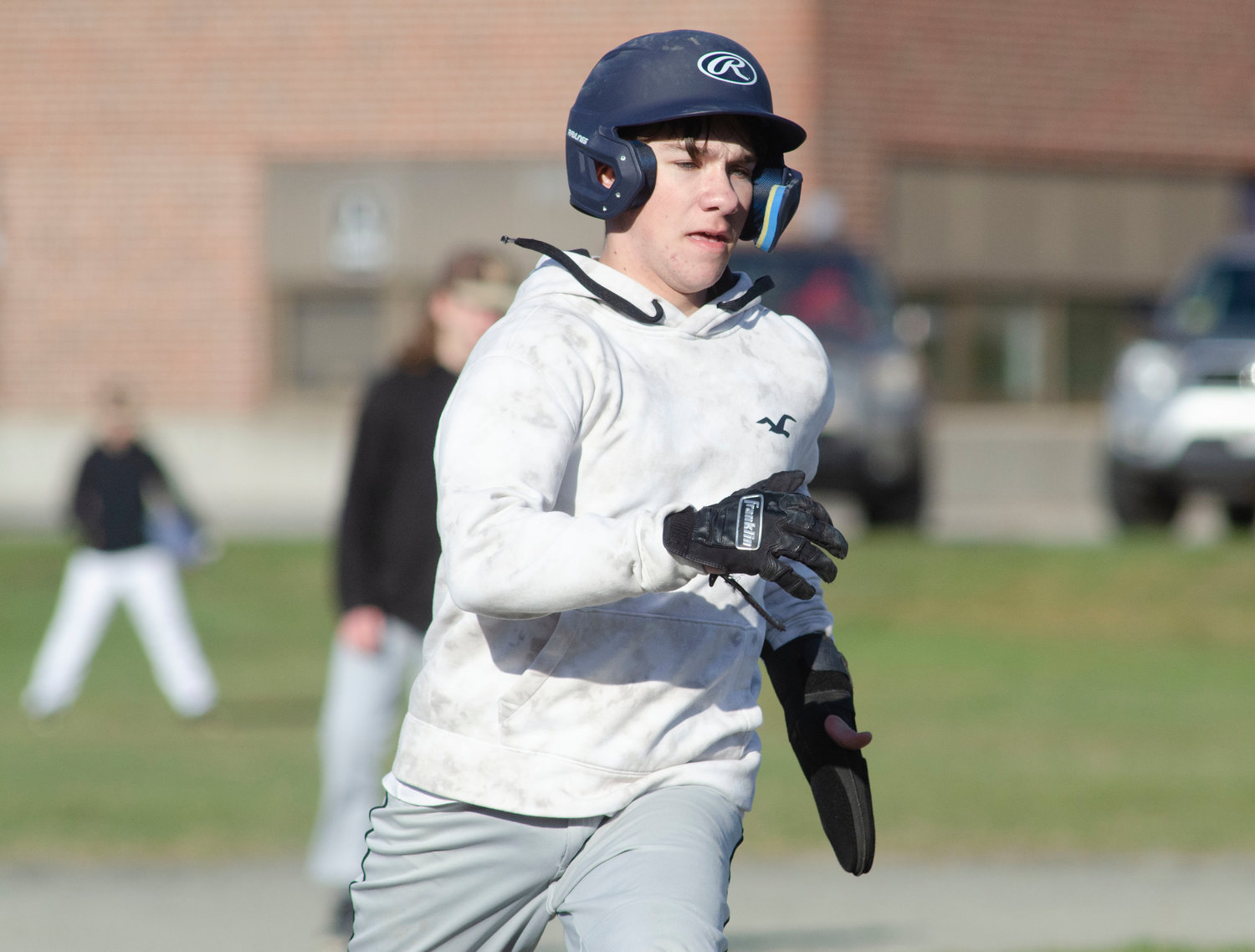 The Westport and Tiverton baseball teams met for their first ever scrimmage game behind the former Westport High School on a cold and raw Wednesday afternoon. The Tigers won the seven inning game 5-1. Westport head coach Jason Pacheco used seven different pitchers and Tiverton head coach Bob Murray threw four. Both teams used all of their players in the seven inning stint. Last season the Tigers senior laden team struggled through a 6-10 record in Division II. This year’s Tiverton team has a lot of pitching depth and hit the ball well against Westport.

“I have seven kids that throw the ball pretty good right now,” said head coach Bob Murray. “I think we have a pretty good team. We just need a little more time.”

Time is something that the Tigers don’t have as they start their regular season, 21 game schedule this week with a home and home series on Tuesday and Friday against Prout. The verdict is still out on the team’s offense, according to Coach Murray. Though the sophomore Camden Rego hit a monster blast over the center fielder’s head for a triple in the fifth inning. Senior Devin Pieroni bashed the ball and drove in some runs from the fourth spot in the lineup.

“I’m so happy to be playing baseball,” said Pieroni after the game. “I know Covid is still a thing, but I’m so glad that the masks are gone and we actually can play and have fun. It’s my senior year and I’m trying to have the most fun I can and win a banner at the same time, so I’m really excited.”

Jason Potvin, a tall slender junior is slated to be the Tigers’ ace. Senior Devin Pieroni is the Tigers’ number two starter. Pieroni, a tall right hander, pitched well against Westport. He has a nasty fastball and curve.

“We are young team,” said Pieroni. “We definitely have some things to work on, but, I think we’re going to do really well.”

“We’ve got a good number of kids,” Coach Murray said, “But you never know till the games start. Then you get a better idea.”

The Tigers nine is composed of mostly underclassmen this season, with sophomore Cayden Rego starting at shortstop, sophomore Payton Travis at second base and Kamdyn Rego splitting time with Letendre at third base. Rogers and Garside will platoon at first base and junior Jordan Panell will be behind the plate for the Tigers. Junior Luke Prochazka and senior Robert Wise will provide depth for the infield. Freshman Noah Mercer will be the team’s back up catcher.

In the outfield, Pieroni will play centerfield when he’s not on the mound, Potvin will play left, and Nick Mercer, Jacob Arruda and sophomore Zach Scheffler will platoon in right field.

This season will be Coach Murray’s last, as he retiring from teaching and coaching at age 67.

“This is my last year. I’m retiring,” he said after the scrimmage. “It’s like I’ve been doing this since I was twenty,” he laughed.”

Coach Murray led the Tigers to the Division II state championship in 2016. He spent 45 years teaching thousands of players and students about sports and life. During the football season the school honored him by naming the new athletic fields, the Robert Murray Athletic Complex. As football coach, Coach Murray and the Tigers won Super Bowls in 1990, 1996, 2000 and 2018 and made playoff appearances in 2003, 2004, 2009 and 2016, and won six division championships. Coach Murray also coached the girls basketball team for 21 years, accumulating more than 250 wins and two division championships. He was named Coach of the Year in 1985, 1995 and 2001.