Tiverton to play Narragansett in the championship on Sunday

Tigers senior midfielder Luke DelDeo scored the tying and winning goals late in the second half to give Tiverton a, 3-2, comeback victory over Burrillville during a Division III semifinals home game …

Tiverton to play Narragansett in the championship on Sunday 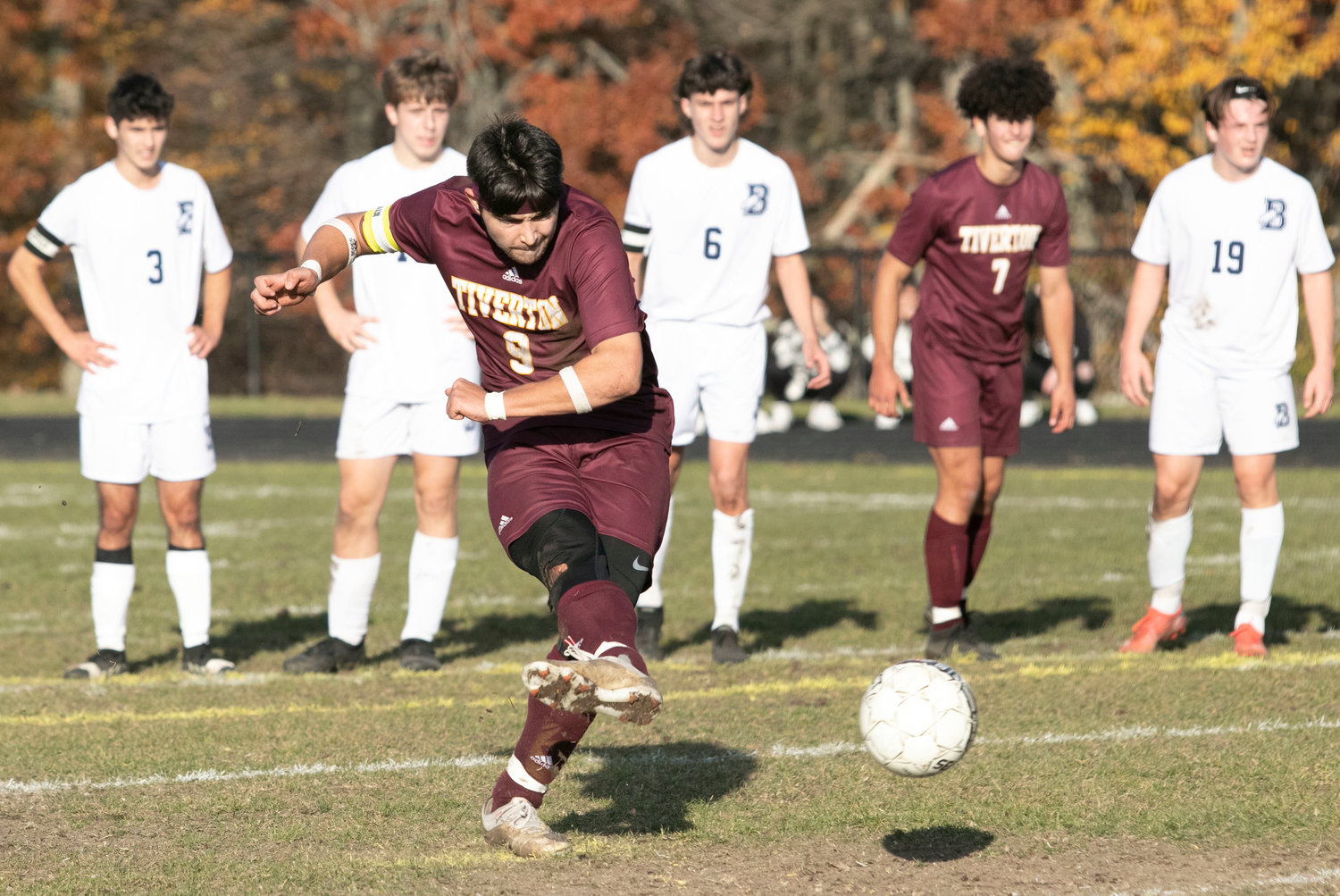 Tigers senior captain Luke DelDeo blasts a penalty kick by Broncos goalkeeper Brady Linfield to give the Tigers a, 3-2, lead with three minutes left in the game. Tiverton went on to win and will play in the Division III championship on Sunday. 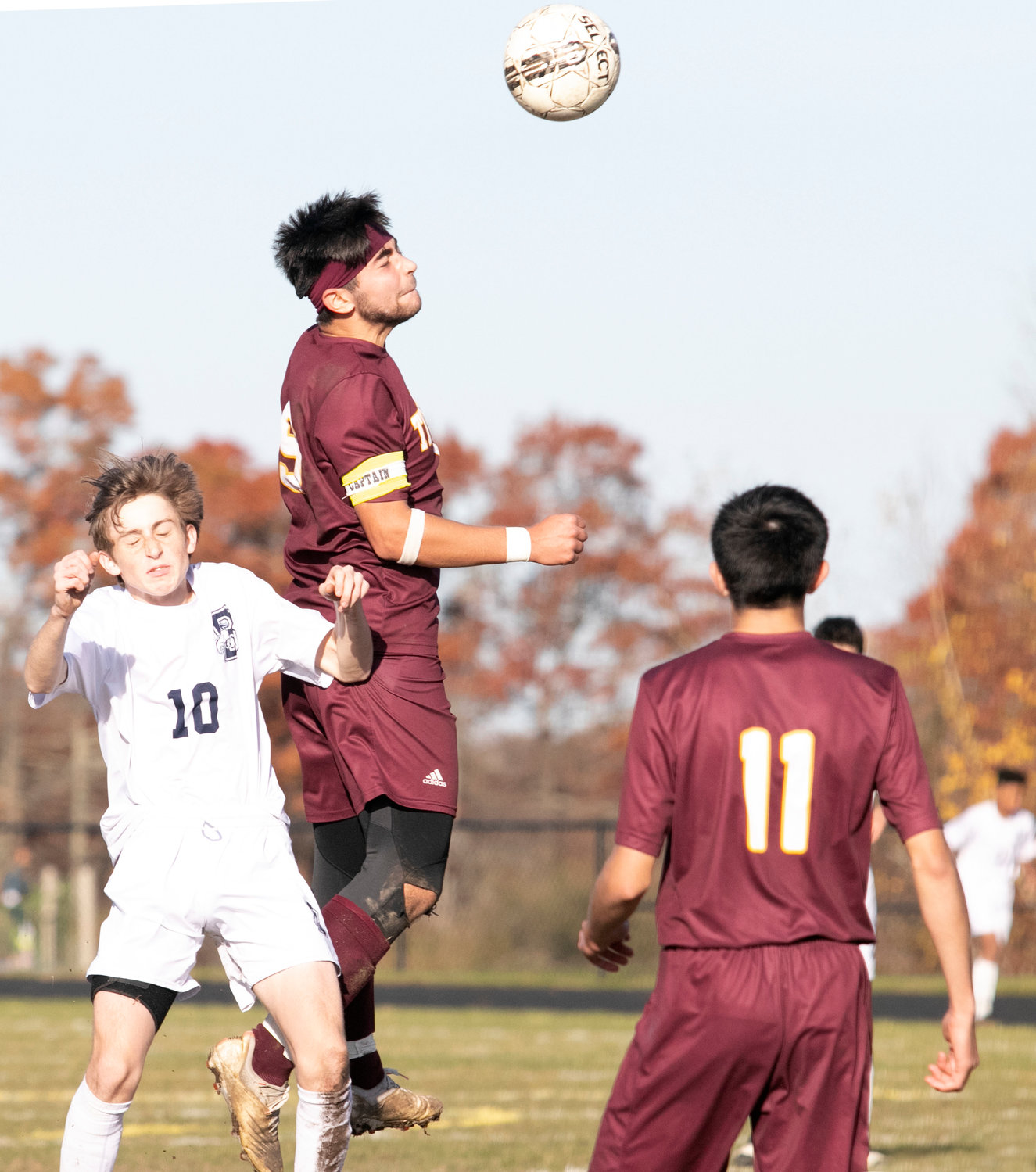 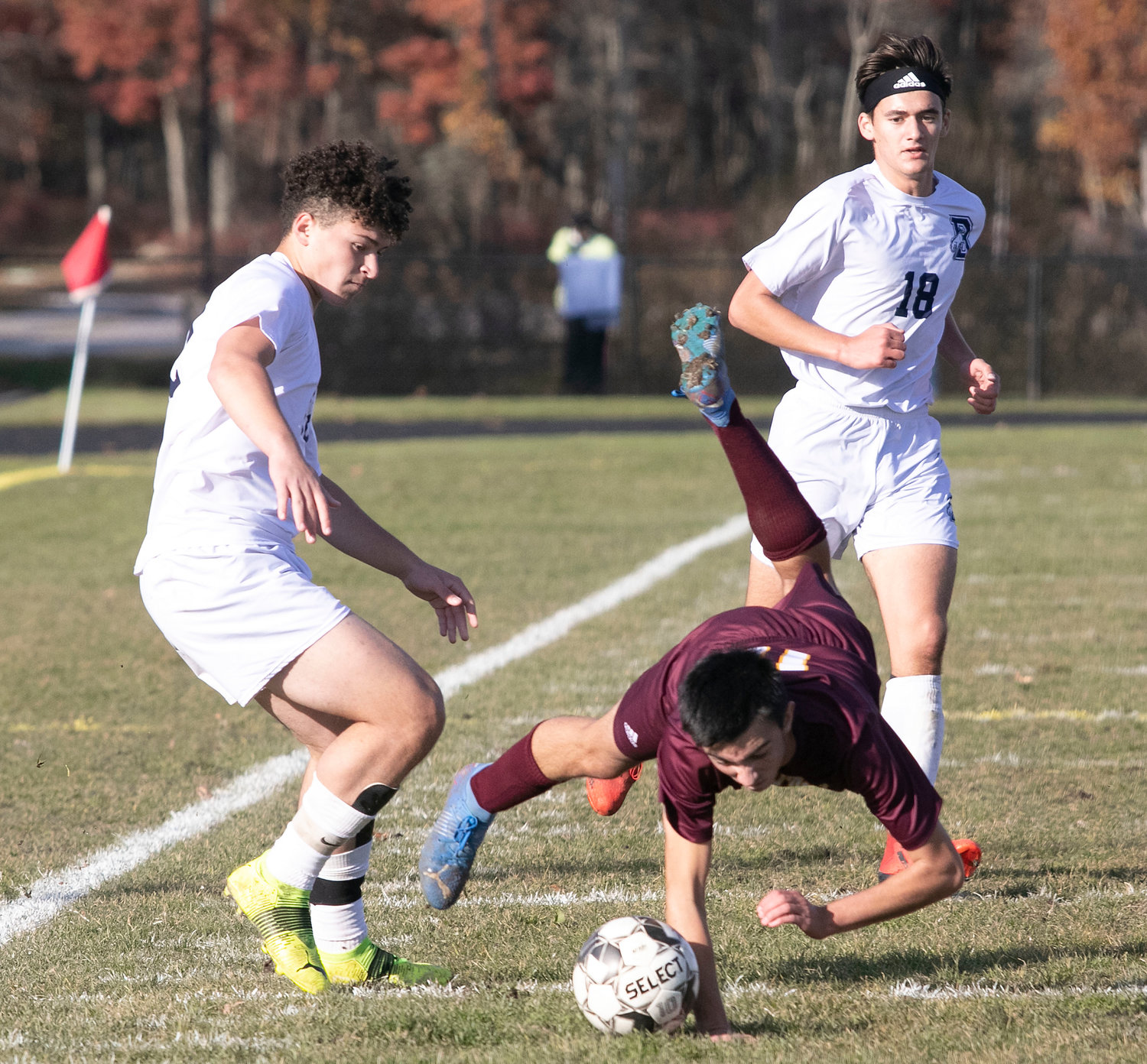 Midfielder Connor Nobrega is upended while dribbling up field in the second half.
Photos by Richard W. Dionne, Jr. 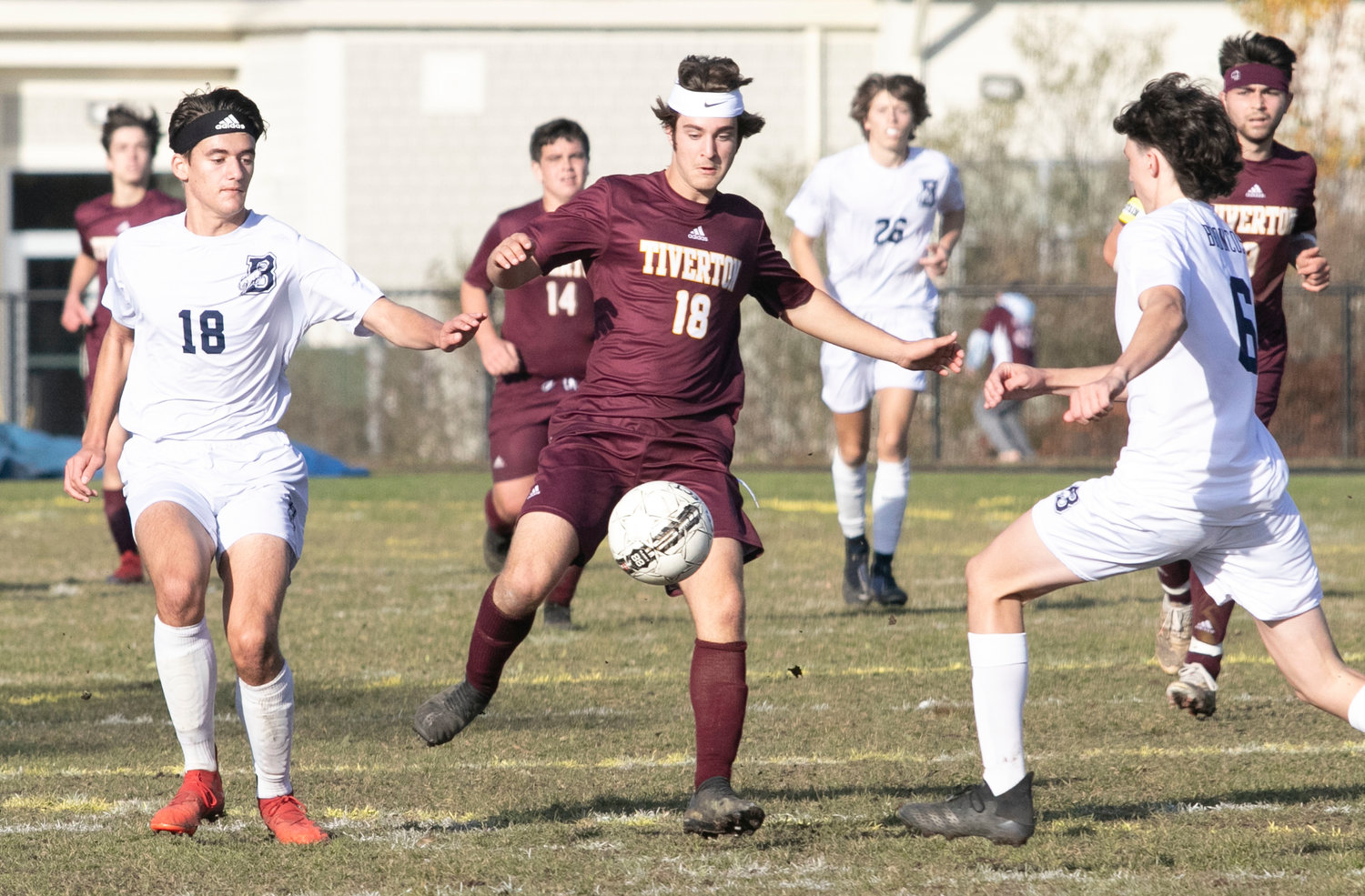 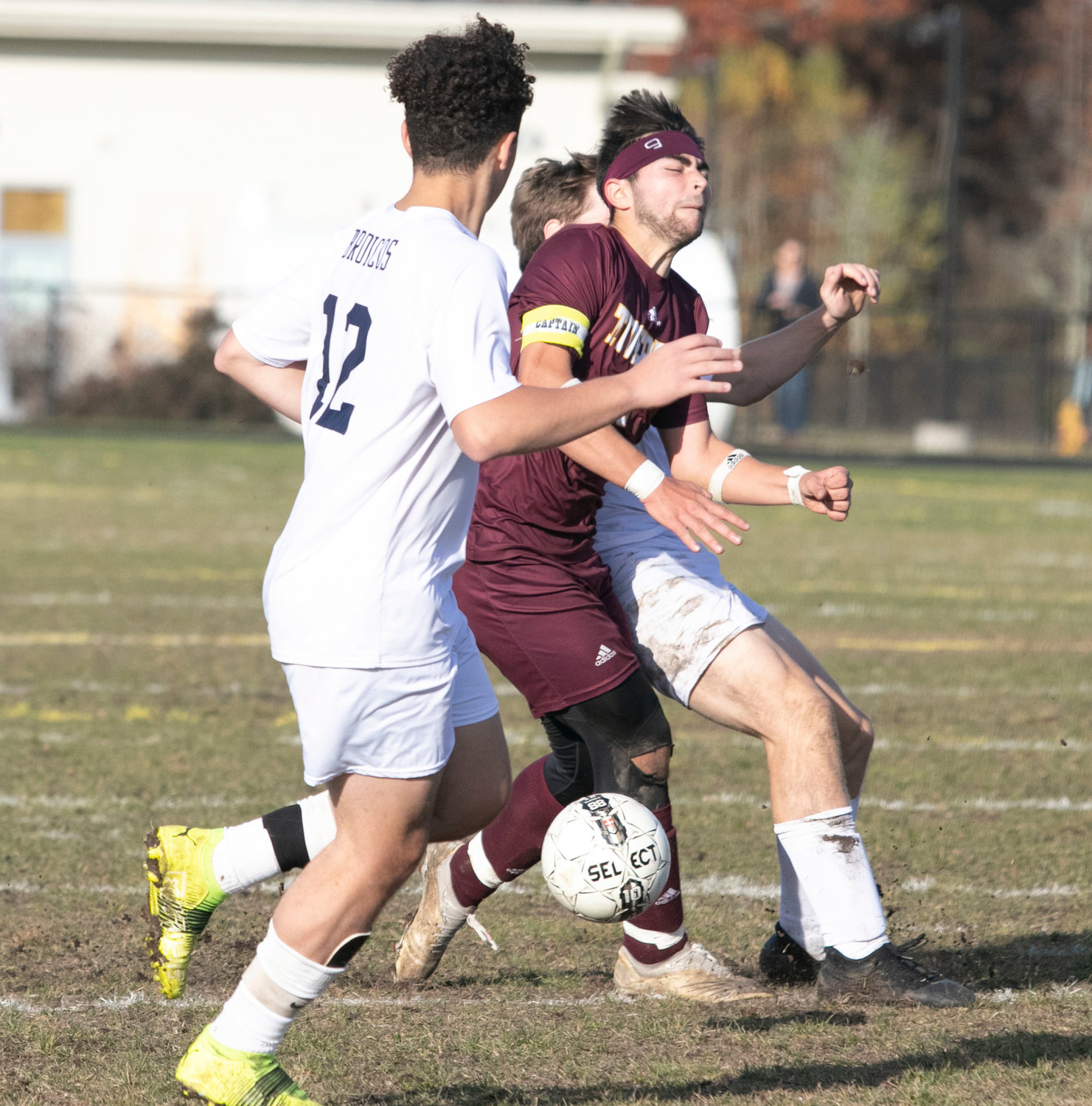 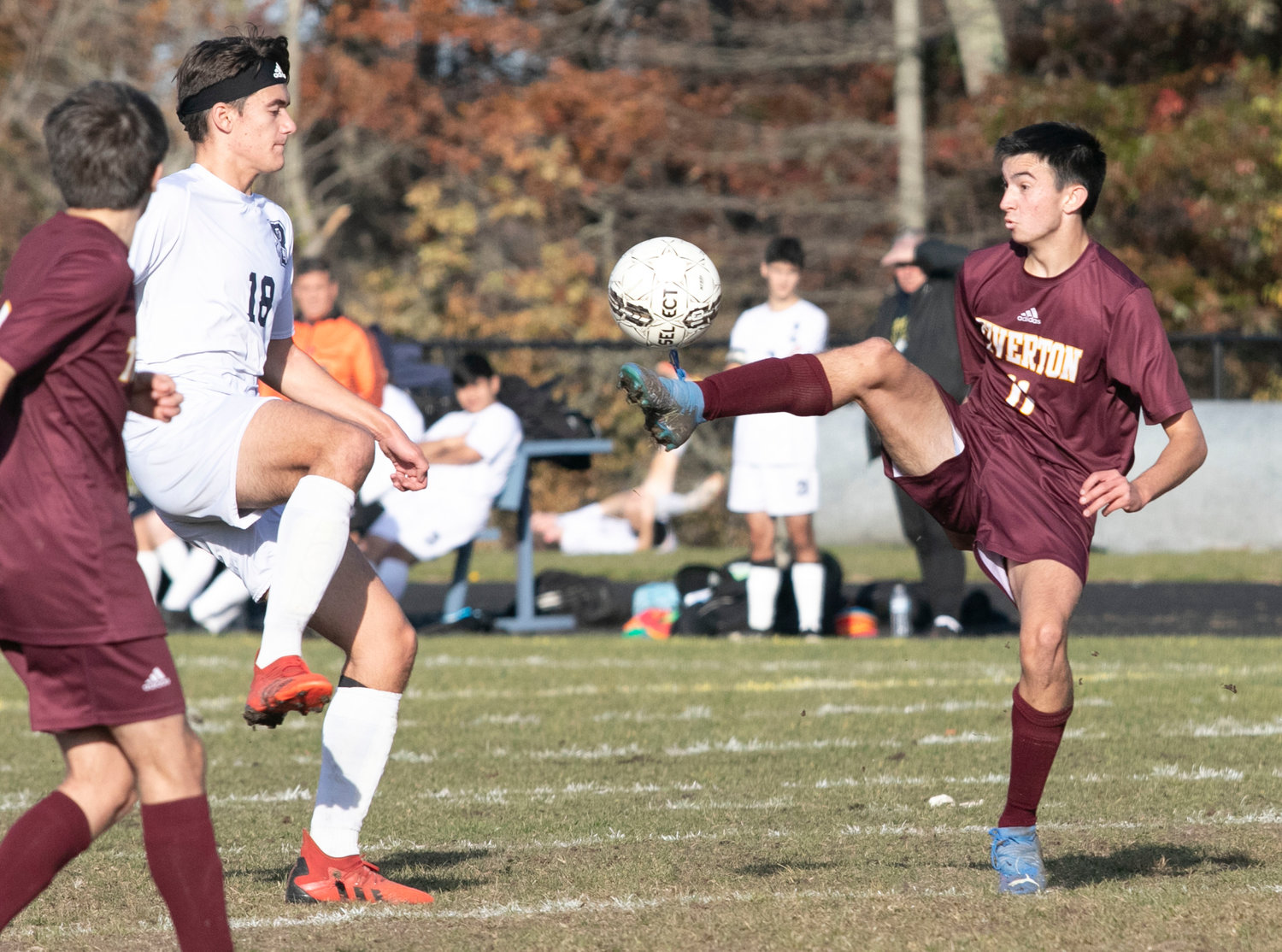 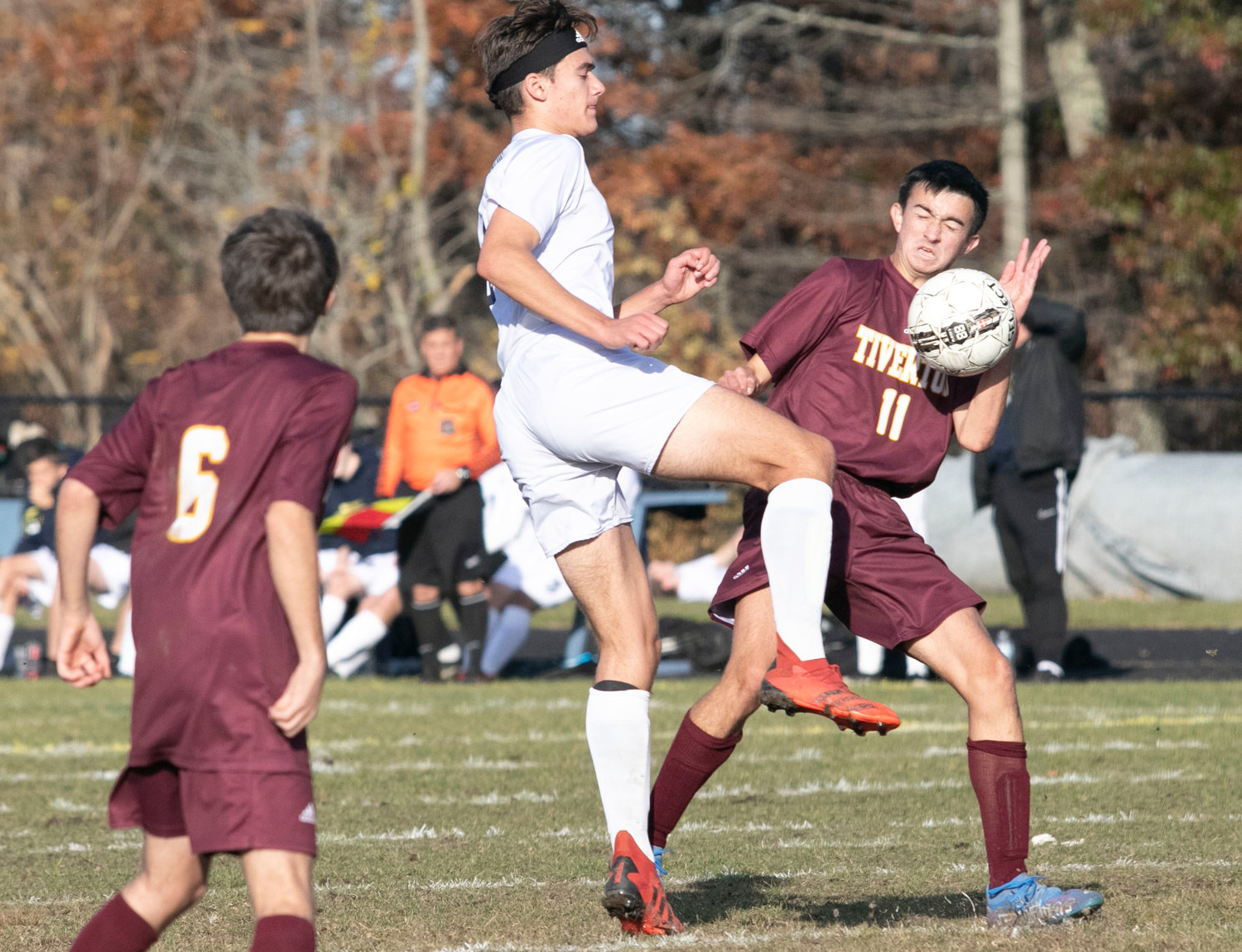 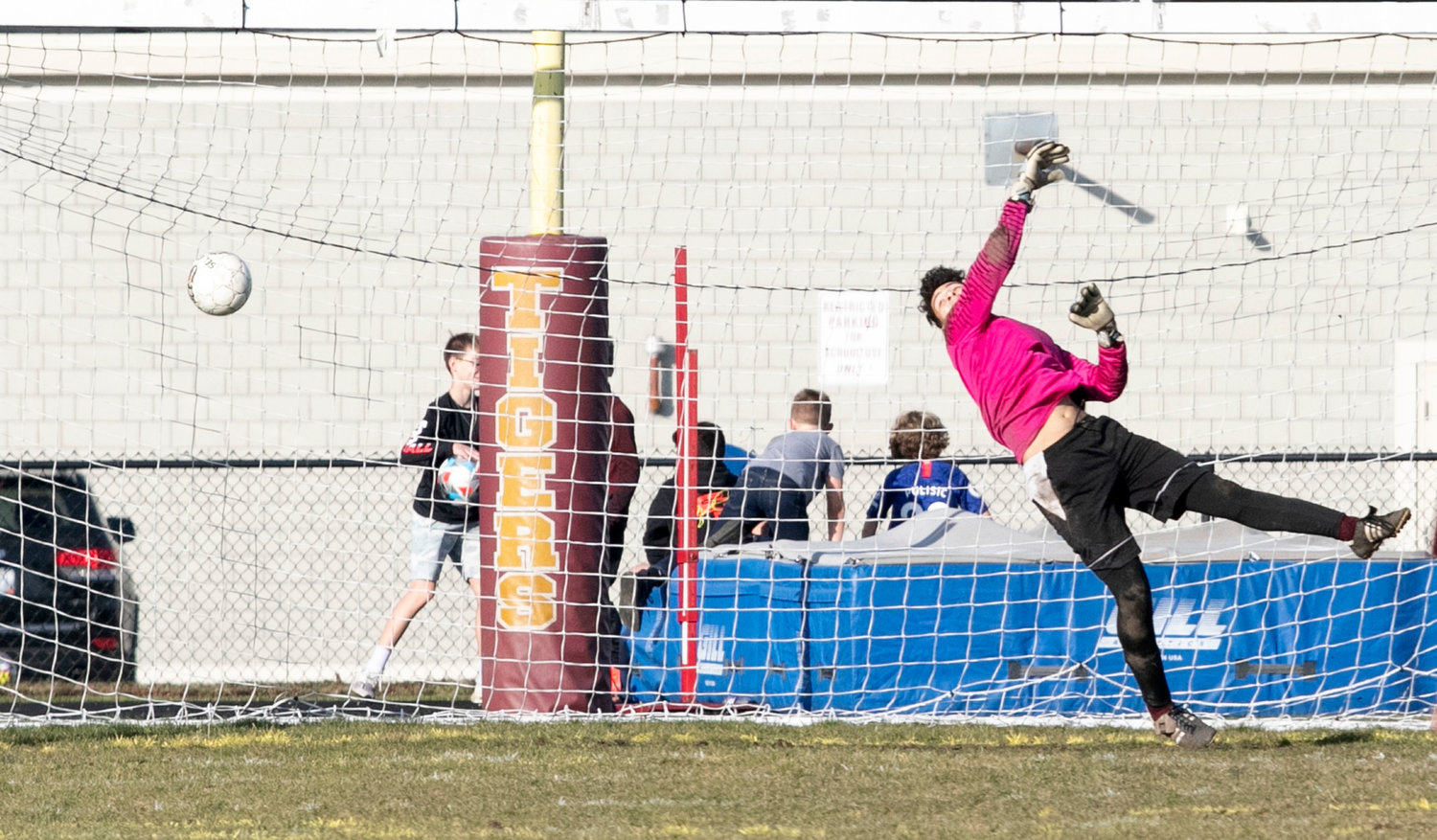 Broncos defender Gilherme Santos blasts a kick over Nathaniel Sama to give Burillville a, 2-1 lead in the second half. 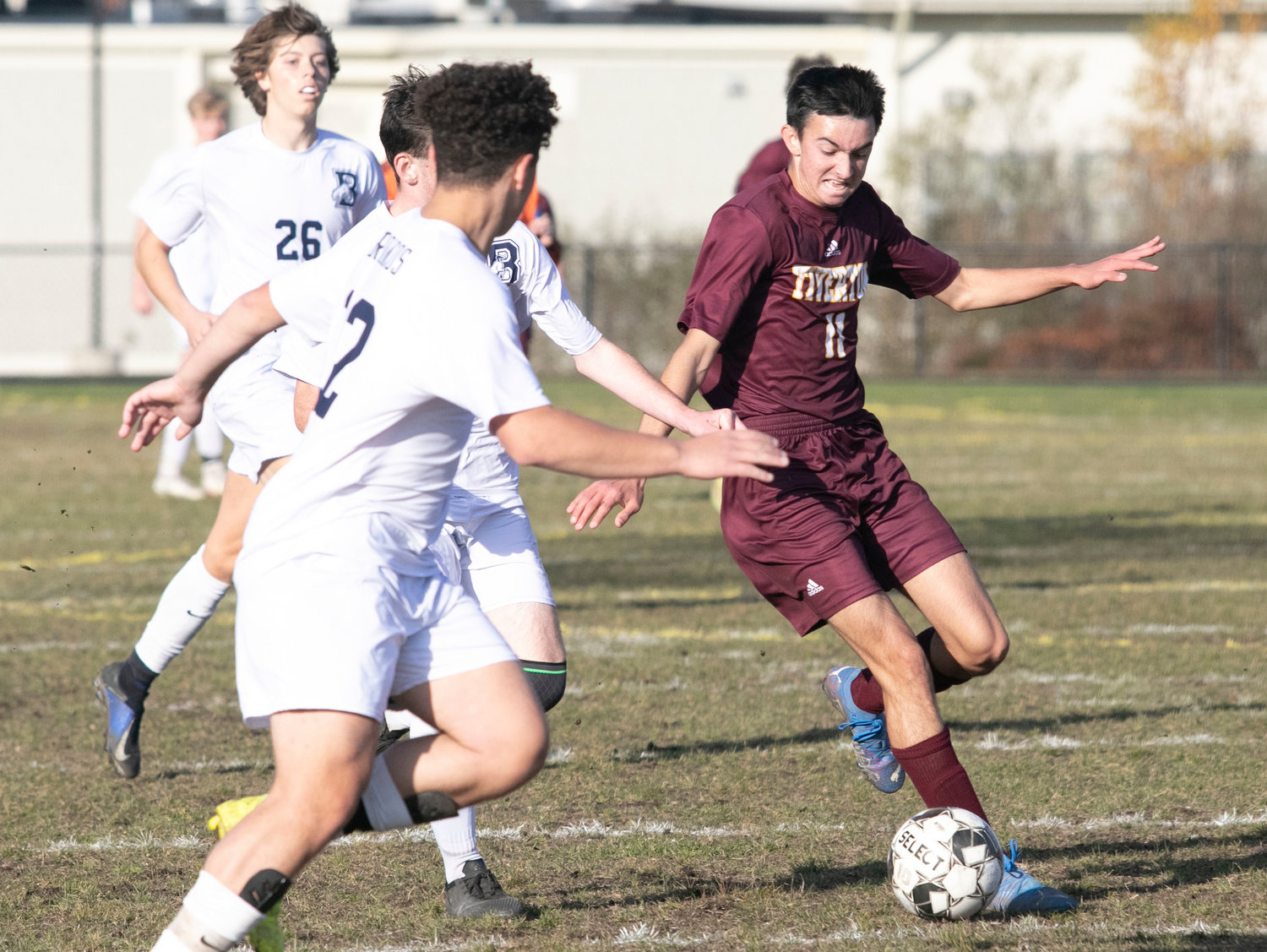 The Tigers celebrate with Luke DelDeo (middle) after he tied the game in the second half. 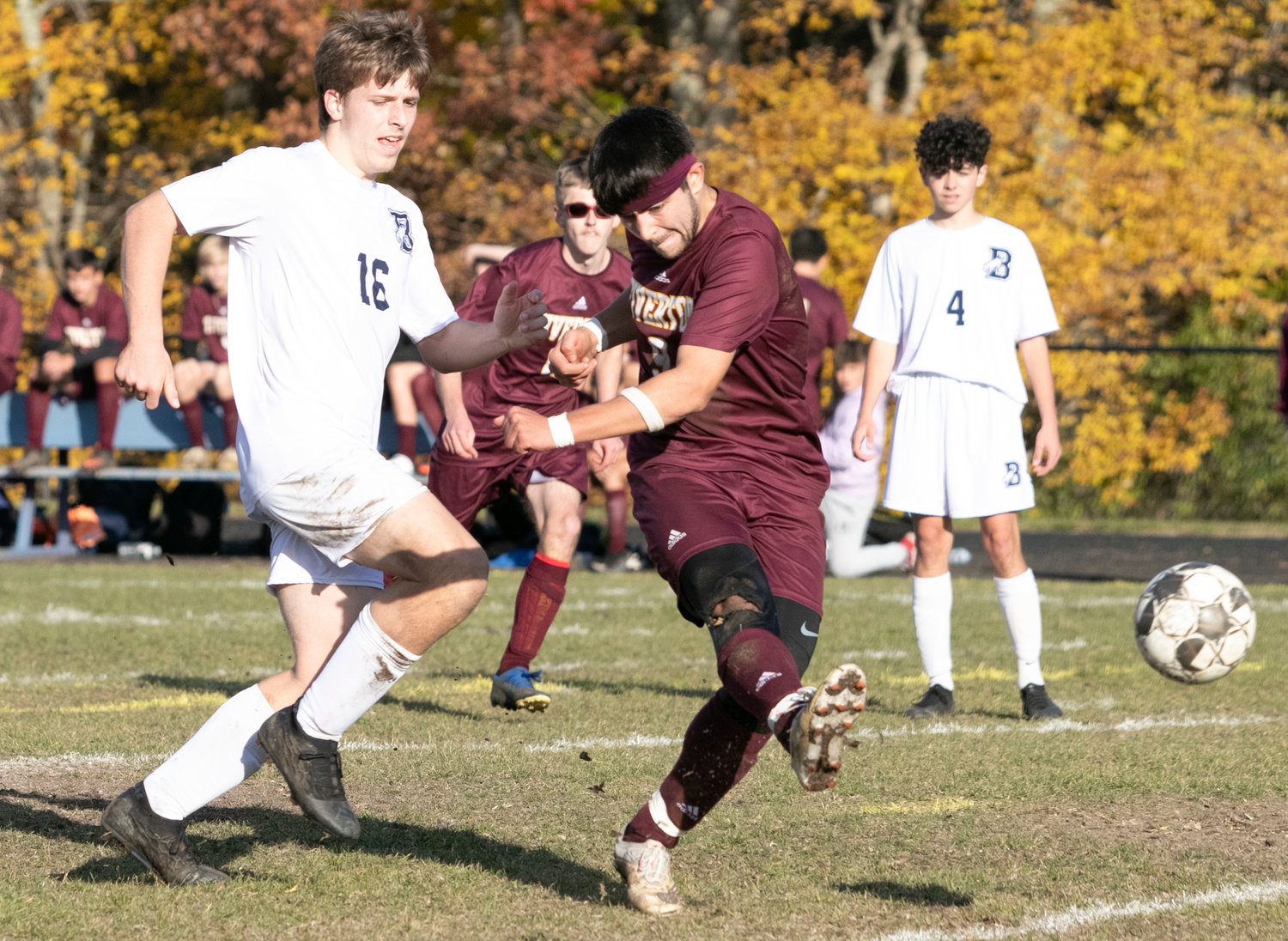 Luke Deldeo blasts a kick into the goal after collecting a throw in from teammate Keegan Dutelle, to tie the score, 2-2, in the second half. Sama makes a save and sends a shot over the crossbar in the second half. Midfielder Toby Harrison turns and kicks the ball towards the goal, but it hits the hand of charging Broncos defender Giovanni Acevedo Luna and the referee called a hand ball violation. Tigers senior midfielder Luke DelDeo scored the tying and winning goals late in the second half to give Tiverton a, 3-2, comeback victory over Burrillville during a Division III semifinals home game on Thursday afternoon.

The 17-0, one seeded Tigers take on 16-1-1, two seeded Narragansett in the Division III state championship at Cranston Stadium on Sunday.

Freshman forward Kieth Gillette scored to give Tiverton a, 1-0 lead, ten minutes into the game and Burrillville senior forward Iassac Collins tied the score, 1-1, four minutes later to set the stage for an exciting second half.

Things looked grim for Tiverton when they lost their senior captain midway through the second half with the score still tied, 1-1. Deldeo collected a pass on the Broncos side of the field and began to step into a kick when a Broncos defender crashed into him. The midfielder fell to the ground holding his left leg. He got himself up, limped off the field and collapsed beside the Tiverton bench.

With the Tigers best player off the field, Burrillville promptly took advantage of the opportunity. Sophomore Guilherme Santos blasted a 30 yard kick over Tiverton goalkeeper, Nathaniel Sama to give the Broncos a 2-1 advantage at the 46 minute mark.

DelDeo dusted himself off and limped back onto the field. The Tigers as time diminished,  were desperate and on the attack. Tiverton junior forward Connor Nobrega collected a pass and dribbled the ball up the right sideline when a Broncos defender crashed into him and knocked the ball out of bounds. Tigers defender Keegan Dutelle took the throw in and heaved the ball into the middle of the box to Deldeo. He knocked the ball down, wheeled and kicked a shot by Broncos goalkeeper Brady Linfield to tie the game with 20 minutes left in the game. The fans cheered as the Tigers celebrated the goal and their new life.

Both teams had chances to score in the remaining minutes. Sama, (9 saves) was terrific down the stretch. Knocking shots over the top of the crossbar and directing the Tiverton defense.

Tiverton received a golden opportunity with three minutes left to play in the game. Tigers midfielder Toby Harrison collected the ball in the box and stepped into a kick that hit the hand of Broncos sophomore defender Giovanni Acevedo-Luna. The referee signaled a hand ball violation and awarded Tiverton a penalty kick.

DelDeo stepped up again and took the game into his own hands. The referee placed the ball at the hash and the senior captain blasted a kick by Linfield into the back of the goal to give the Tigers a, 3-2 lead.

The team celebrated again with their senior captain when after the final whistle blew. Sama went to the goalposts and began his ritual. The Tigers were going to the finals.