TIVERTON — Going on five years since a large tiger shark took much of his left leg, Tiverton surfer Colin Cook found himself standing atop a California medal podium two weekends ago, being … 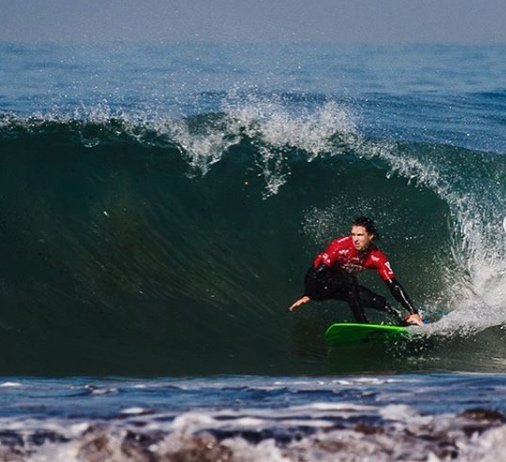 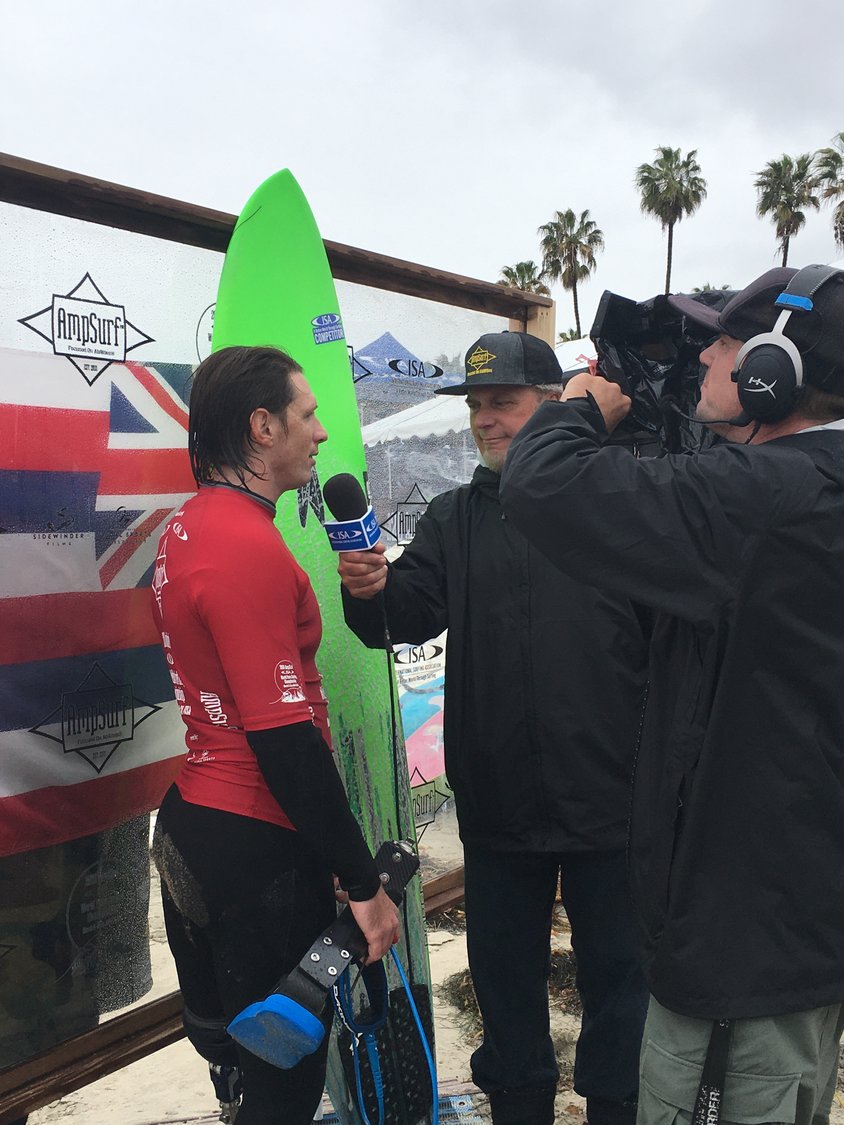 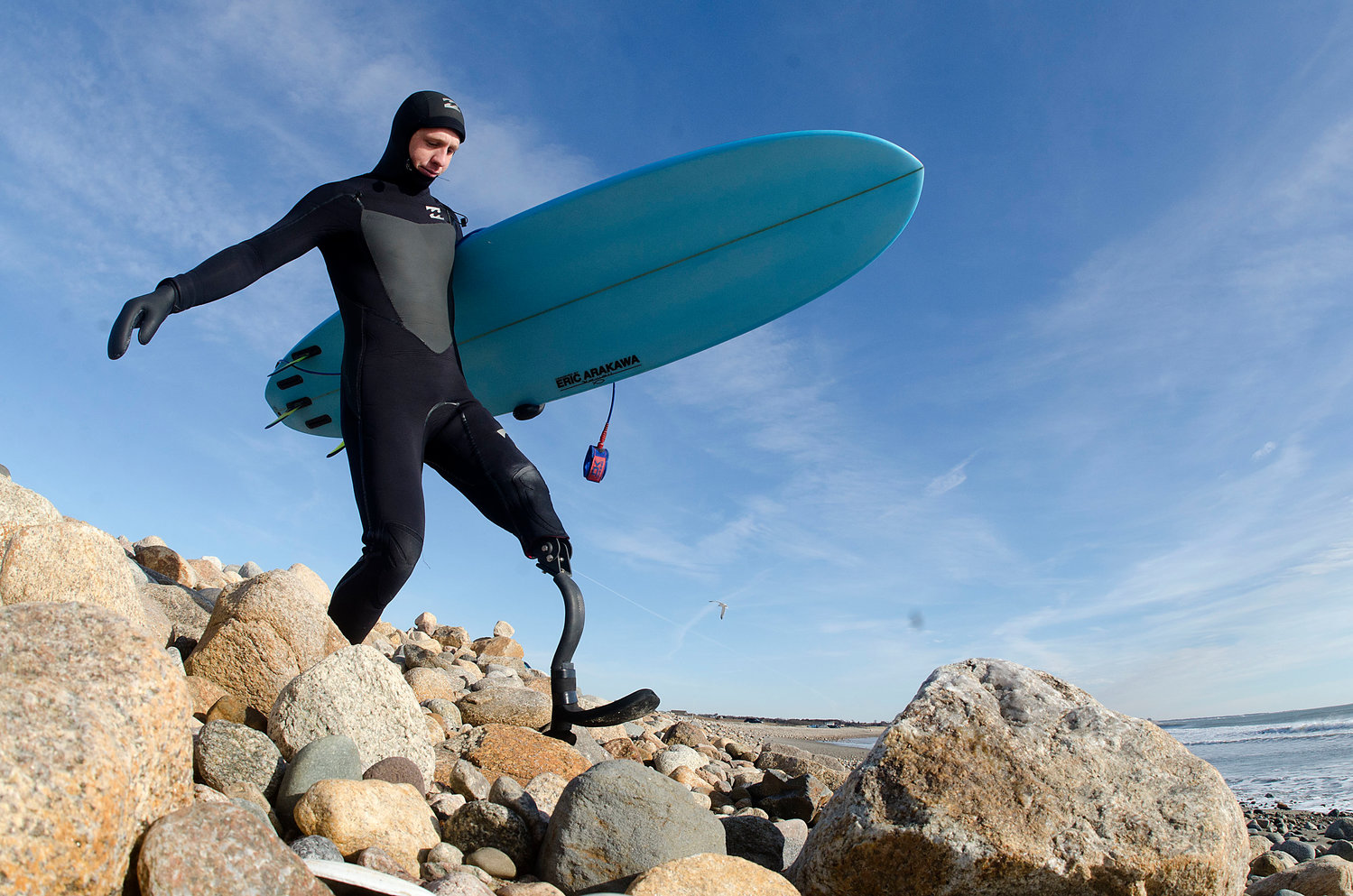 Colin Cook climbs down the rocks at Little Compton’s South Shore Beach nearly two years after the shark attack that claimed part of his left leg. He’s wearing an early-version carbon fiber limb designed and built for him by Sakonnet area friends especially for use while surfing.
Richard W. Dionne Jr.
Previous Next
Posted Friday, April 3, 2020 12:00 am

Never in a million years would I think that I would lose a leg then continue to become the world adaptive surfing champion. — Colin Cook”
By Bruce Burdett

TIVERTON — Going on five years since a large tiger shark took much of his left leg, Tiverton surfer Colin Cook found himself standing atop a California medals podium three weekends ago, being cheered as a world champion.

It’s a victory that just might have him on a path to the Olympics.

Competing in La Jolla, California, against elite international competition, Cook won the Para Stand 3 Division at the International Surfing Association’s World Adaptive Surfing Championships. The championships drew over 140 competitors from 25 national teams and happened just days before such sports events were shut down due to coronavirus.

Reached at his home in Haleiwa, Hawaii, he said, “I’m honored and humbled to compete alongside such amazing surfers that have not only overcome so much but have pushed to surf at their highest level. Winning gold was just icing on the cake.”

“Never in a million years” he added, “would I think that I would lose a leg then continue to become the world adaptive surfing champion.”

Cook’s accomplishments are all the more remarkable in that his left leg was taken above the knee rather than below, said his father Glenn Cook in Tiverton. ”That joint makes so much difference.”

They speak of “AK” (above knee) and “BK (below knee) —his father said, and joke that AK surfers don’t even think of BK surfers as injured.

This win, and the fact that surfing has become an Olympic sport, give reason for Cook to at least put the 2024 Olympics (France) on his radar screen given the Olympic movement to include a Paralympic version of every competition.

Asked about that, Cook said, “As the sport continues to grow, the Paralympics are on everyone’s mind. Hopefully the Paralympics include surfing as they have already been included in the Olympics.”

“I’m so thankful for all the support everyone has given me and look forward to the future ahead,” he added.

Long road to the podium

The shark attack happened on Oct. 9, 2015, during a surfing adventure off Oahu’s Leftovers Beach.

That he survived at all is due to Hawaiian surfer Keoni Bowthorpe, It was Keoni who paddled his board to Cook’s rescue, fending off the shark and towing the bleeding surfer to shore while the 10 to 12-foot shark continued to circle. A Hawaiian newspaper ran a photo of the two titled ‘Blood brothers.’

“A major hero, Cook said of his friend. “I would not be here without him, no doubt.”

Colin said he does not fear sharks nor does he bear them any ill will.

“When I go surfing I am entering their world,” he said, adding that he is appalled by the global massacre of sharks.

“My first concern was, ‘how am I going to surf again?’” Cook said.

“I grew up surfing,” mostly off Little Compton — surfing and building surfboards was what drew him to Hawaii. “Everything revolved around surfing. It was what I loved to do, it was my life.”

That life suddenly seemed distant. At the time, only three people who’ve lost legs above the knee had managed to surf standing up

“It was a month before they could even try to fit me with a prosthetic leg and, when they did, the pain was terrible.” Months were spent learning to walk again at his family’s Seapowet Road house.

His remarkably quick return to South Shore Beach and the sport he loves is due in considerable part to the ingenuity of Sakonnet area friends with serious carbon fiber talent, among them Max Kramers and Brendan Prior.

The challenge was to create a prosthetic that could flex at the knee and ankle yet be stiff enough to provide support and the push needed for control.

And “I needed to be able to feel the board and have good grip.”

The team created an ever-improving series of limbs that provided increasing comfort and control.