Though the Junior Division of the Rhode Island Science and Engineering Fair (RISEF) was canceled in March as a result of the pandemic, five Wilbur and McMahon School eighth grade students were still … 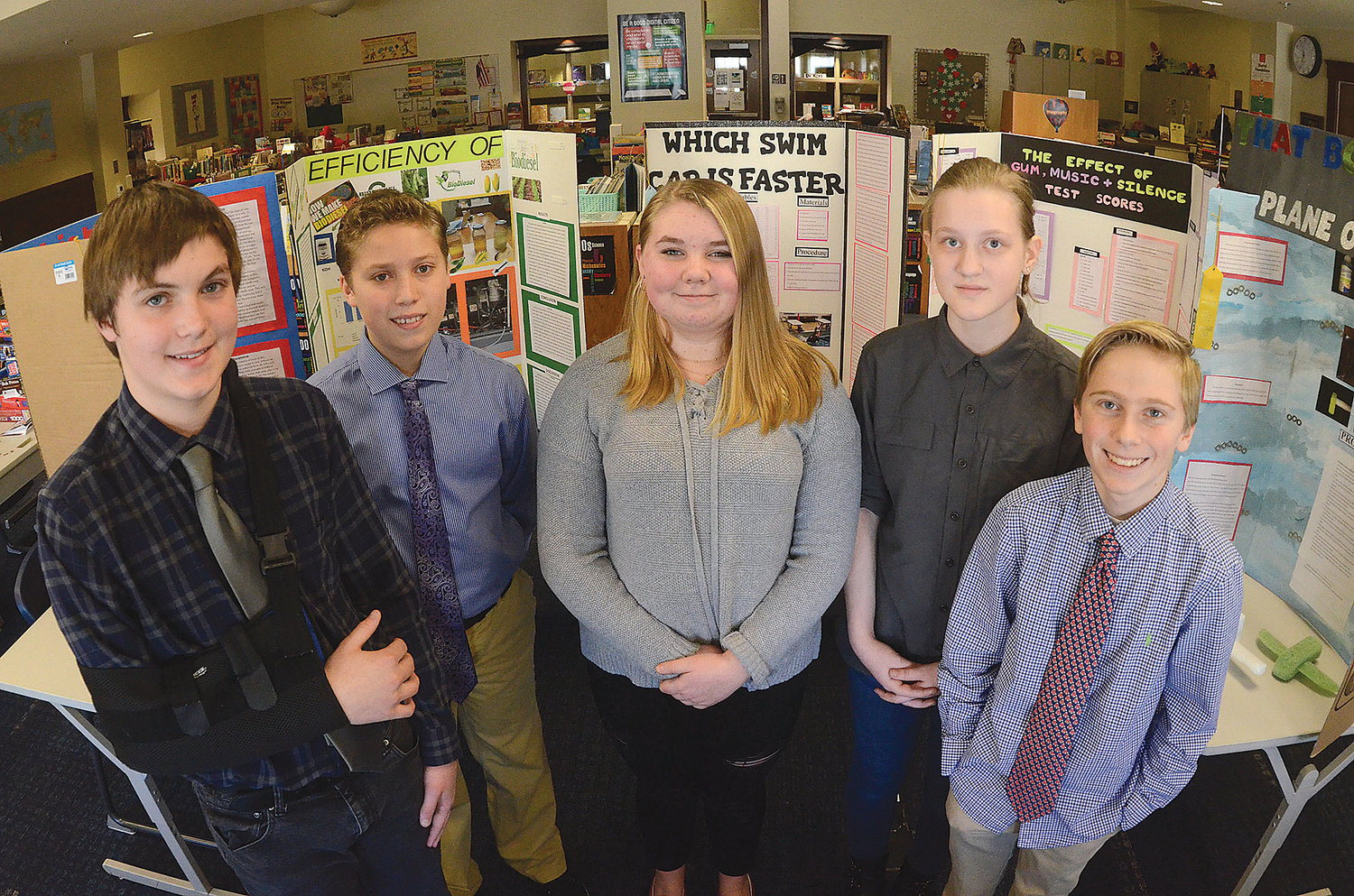 (From left to right) Indiana Pacheco, Archie Rebeiro, Morgan Pattison, Olivia Watters and Ty Polasek, eighth graders at Wilbur McMahon School in Little Compton, show off the projects that qualified them for the Junior Division of the Rhode Island Science and Engineering Fair that was ultimately canceled in March.
Posted Friday, June 5, 2020 10:34 am
By Kristen Ray

Though the Junior Division of the Rhode Island Science and Engineering Fair (RISEF) was canceled in March as a result of the pandemic, five Wilbur and McMahon School eighth grade students were still celebrated for their hard work and innovation amongst the school community.

Ty Polasek, Olivia Watters, Morgan Pattison, Archie Rebeiro and Indiana Pacheco were originally set to compete at CCRI in Warwick on March 14, showing off experiments that ranged from aerodynamics to biodiesel fuel efficiency. While RISEF announced that in light of the cancellation, middle schoolers will receive credit to participate in next year's fair, WMS principal Sonya Whipp said she was impressed with each and every one of the broad-ranging projects as a judge at their own school-wide fair earlier this year.

“It’s not just about the project itself, it’s about what impact it can have on the community at large,” Ms. Whipp said.

A life-long interest in aerodynamics sparked the idea for Ty’s science project as he set out to determine which airplane body and wing design was the most efficient.

To do so, Ty crafted five different models out of Styrofoam and suspended them multiple strings. Using washers as his unit of measurement and a consistent laminar flow, he began to test each plane’s drag force against the weight of the washers by removing them one by one.

Though he had predicted that an airplane with a skinny, ramp-shaped wing design would perform the best, Ty found that his airplane designed with a slight drop into a rounded nose was actually the most successful in reducing drag.

Taking inspiration from her older sister’s project, Olivia decided for hers to see if chewing gum, music or silence might have any impact on studying and test performance. To test each one’s efficiency, Olivia took students from fifth through eighth grade and handed them tests relevant to what they were currently learning in the classroom. Students in each grade level then took tests three different ways: while chewing gum, listening to piano music and in silence.

Out of the four grade levels that she tested, Olivia found that in all but one, gum-chewers had the highest average test scores; for Group D – the eighth graders – listening to music beat out chewing gum by just 0.1 percent.

“Overall, gum did score the highest compared to all the others,” Olivia said.

While she did not have enough participants to consider her experiment accurate, Olivia knows through her research that chewing gum does have some proven benefits regarding test-taking and study habits.

“If it was chewed 5 to 10 minutes before taking a test, it actually improved all of the functions like improved memory, blood flow for about 15 to 20 minutes,” she said.

As a swimmer, Morgan chose for her project to experiment with different types of swim caps to see which is the most hydrodynamic.

To do so, Morgan acquired five swim caps of varying brands and materials: TYR latex, Arena Classic Silicone, Speedo Solid Latex, Arena Poolish Moulded and Speedo Silicone Aqua V. Over the course of a few weekends, she tested each one by completing five trials each for every stroke (breaststroke, butterfly, backstroke and freestyle) in a 25-yard span.

“Some (trials) supported that and some didn’t, but overall it was more hydrodynamic,” Morgan said.

Climate change and global warming influenced the first-place finishing Archie’s project as he investigated the efficiency of different kinds of biodiesel fuel.

To start, Archie acquired three different kinds of plant-based oils – peanut, corn and soybean – to use in his experiment, mixing each with methanol and potassium hydroxide to make them combustible. Then he rented a diesel generator to test the three oils and Newport Biodiesel (comprised of waste oil left over from local restaurants) for their runtime and cost-efficiency.

“What was really surprising actually was my biodiesel I actually made was more efficient than Newport Biodiesel,” Archie said.

An avid skateboarder in his free-time, Indiana wanted to know which kind of wax would allow him to travel the farthest when sliding on a rail.

To find out, Indiana gathered four different waxes:  Spitfire and Santa Cruz, two skateboard wax brands; Stucky Bumps surf wax; and candlewax which skateboards first used back in the 1970s. One-by-one, he applied each wax onto his test rail, completing 20 board slides for each kind and scrubbing the rail down between wax changes.

After testing each wax – plus one set without any used at all – Indiana found the final results to be surprising:  Candlewax outperformed both skateboard brands, allowing him to slide roughly 3 cm more than second-place finishing Santa Cruz wax.

“I just thought that in the 50 years that wax has been produced they must have improved on it,” Indiana said.