The Westport baseball team scored three runs in the bottom of the ninth inning to overcome a 6-4 deficit and beat West Bridgewater 7-6 during their last regular season home game on Tuesday night. 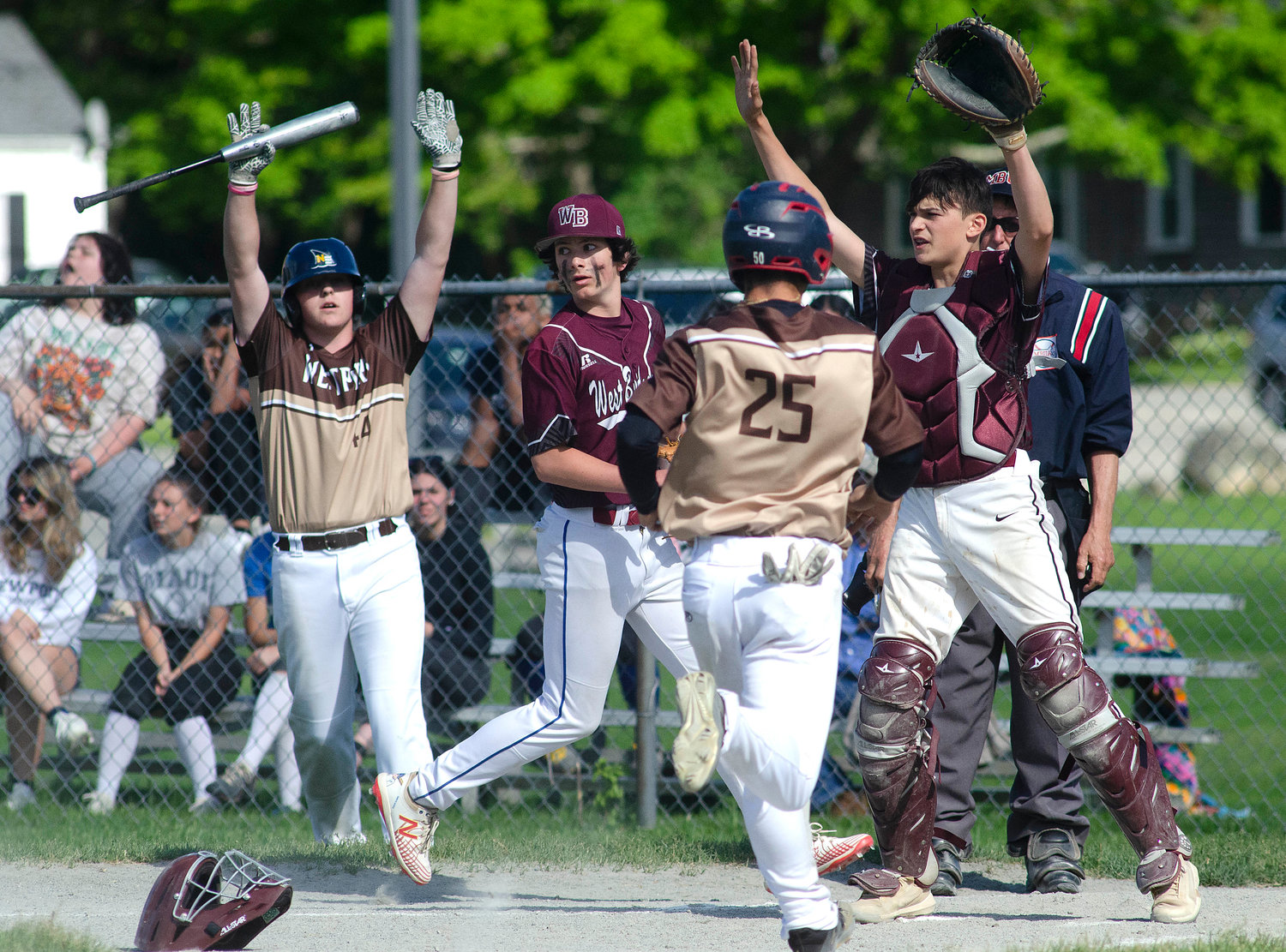 Connor James (left) signals teammate Nick Arruda to stay up as he crosses home plate in the third inning of their game against West Bridgewater on Tuesday. Westport won the home game 7-6.
Photos by Richard W. Dionne, Jr. 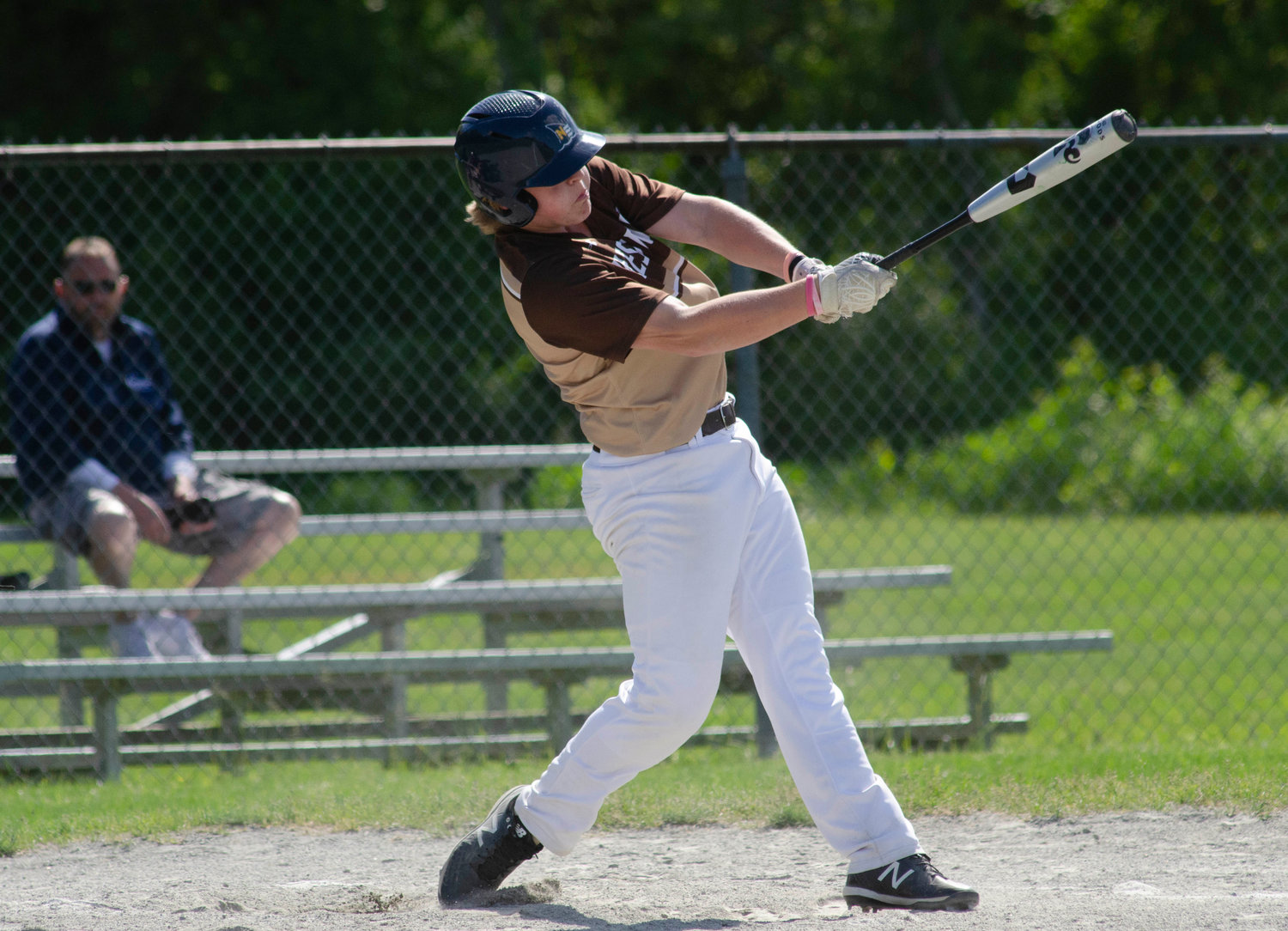 Connor James smashes one of his three hits during the team's game against West Bridgewater.
Photos by Richard W. Dionne, Jr. 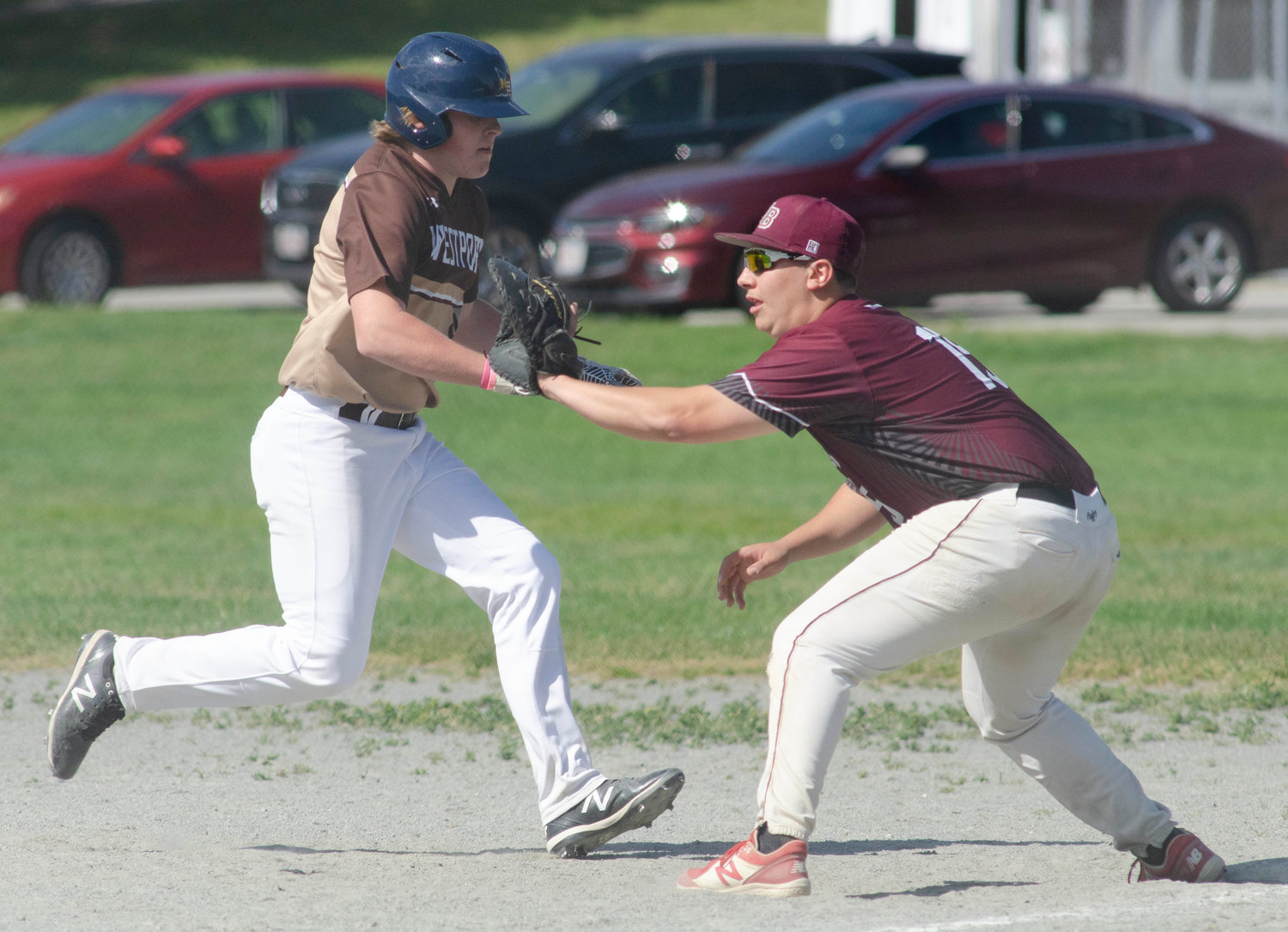 Connor James runs back to first base during a West Bridgewater pick off attempt.
Richard W. Dionne, Jr. 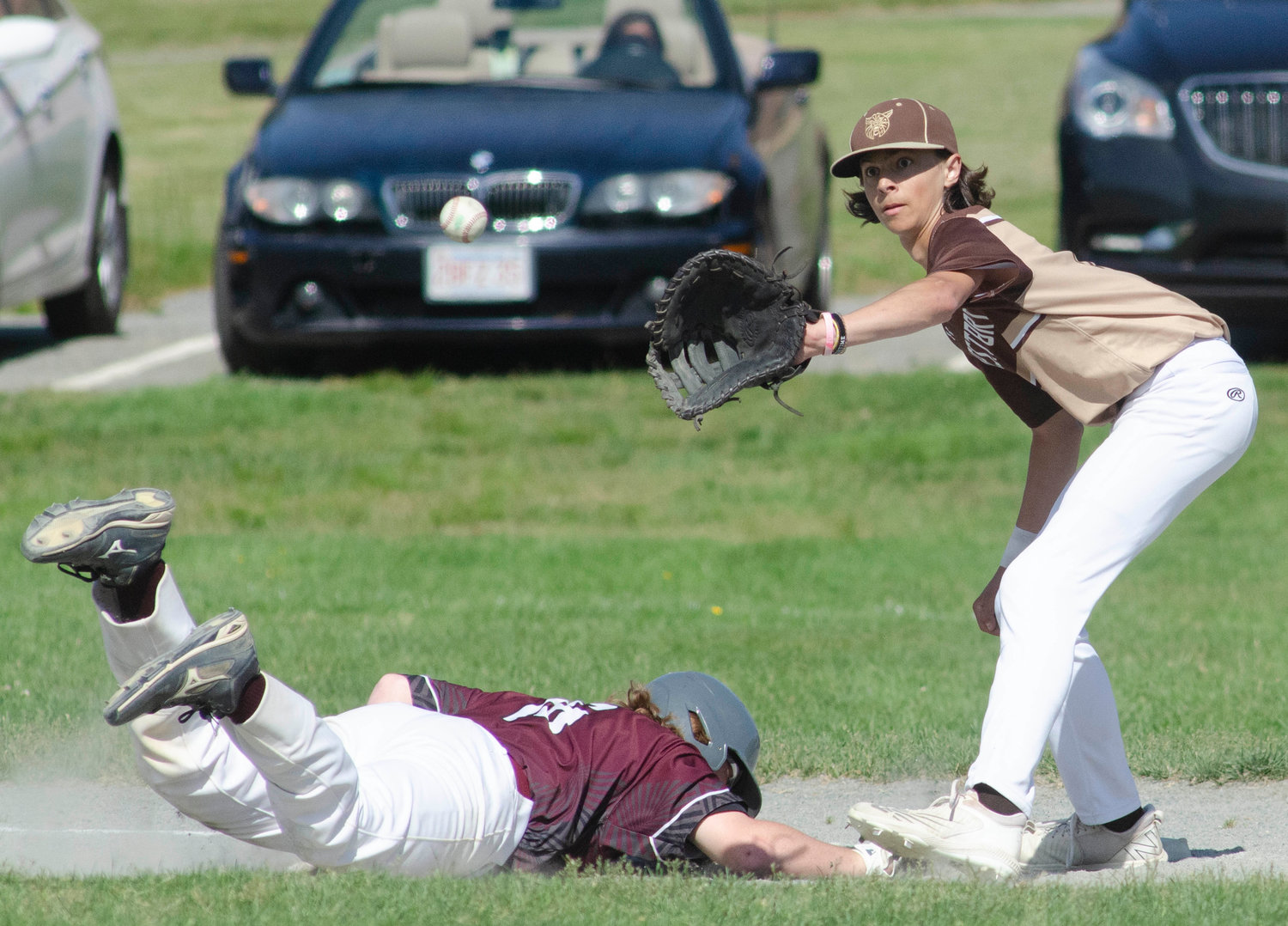 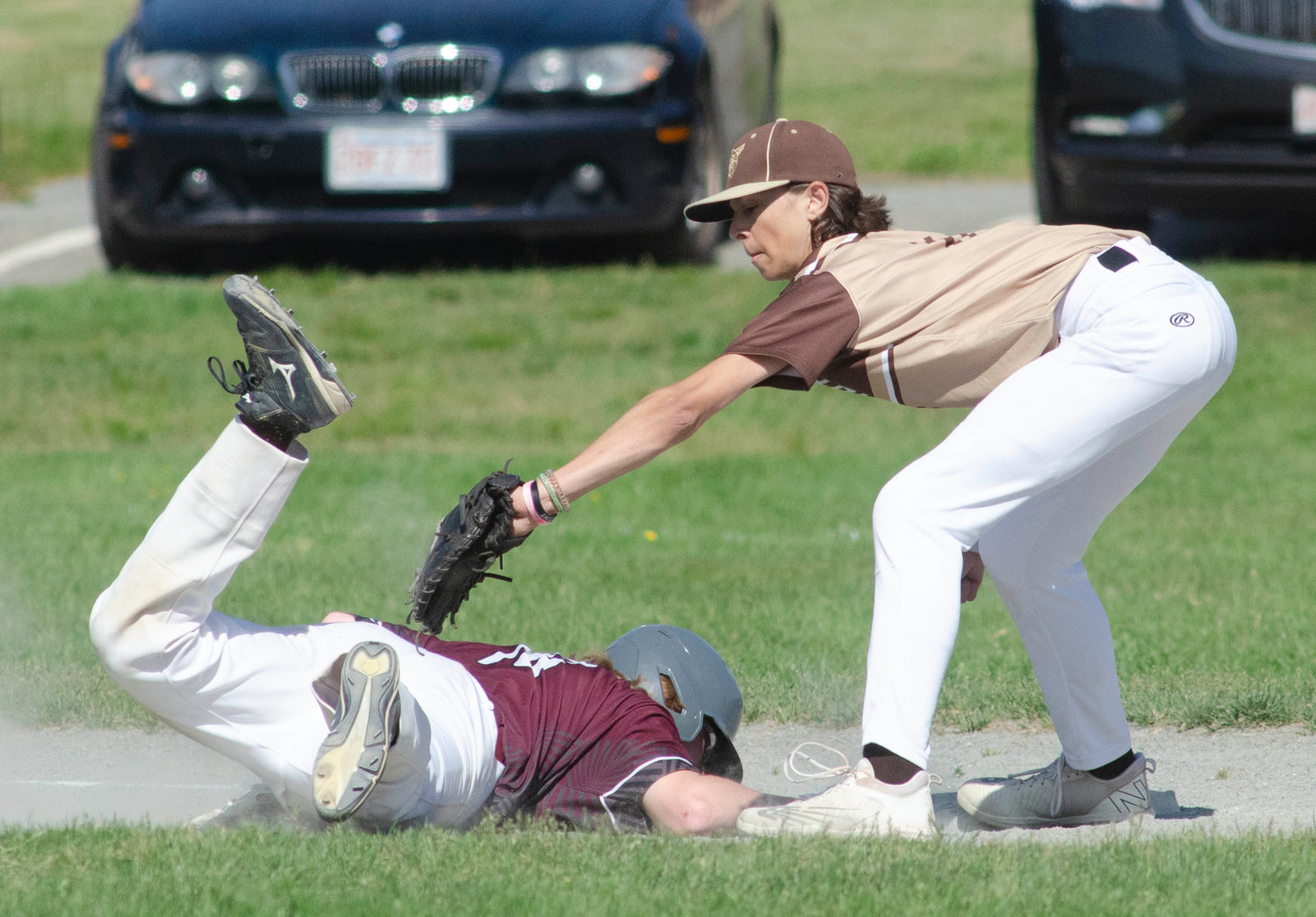 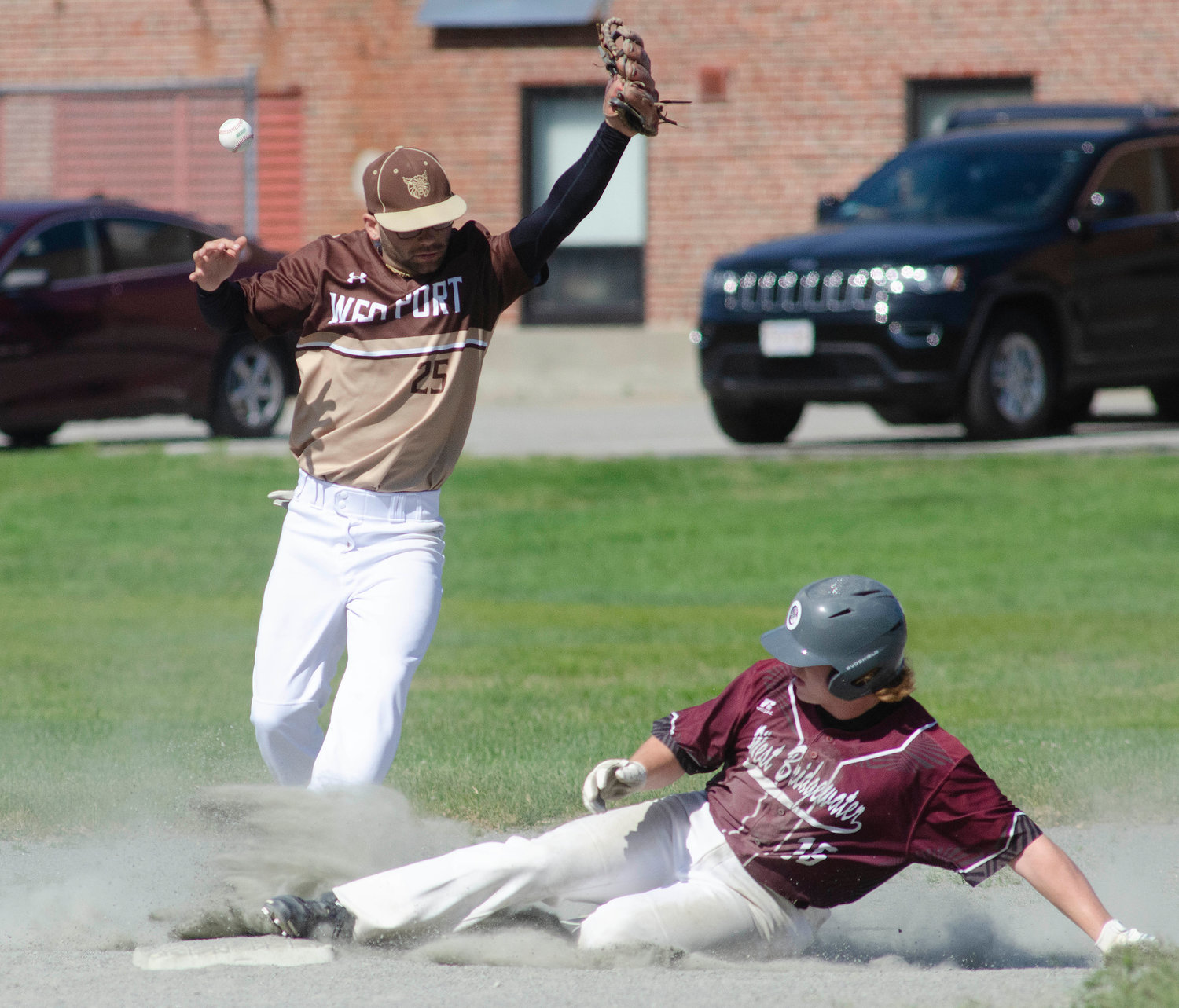 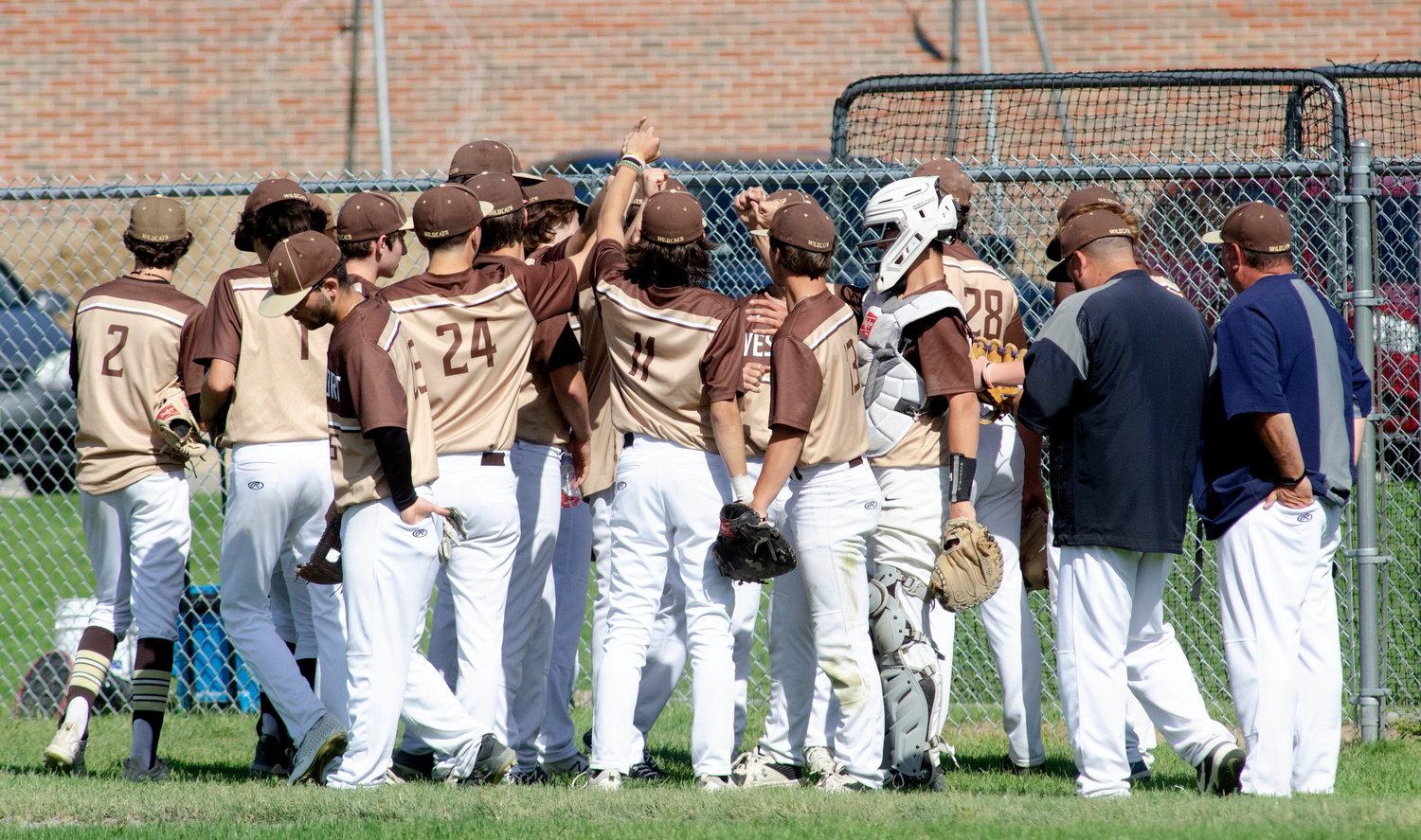 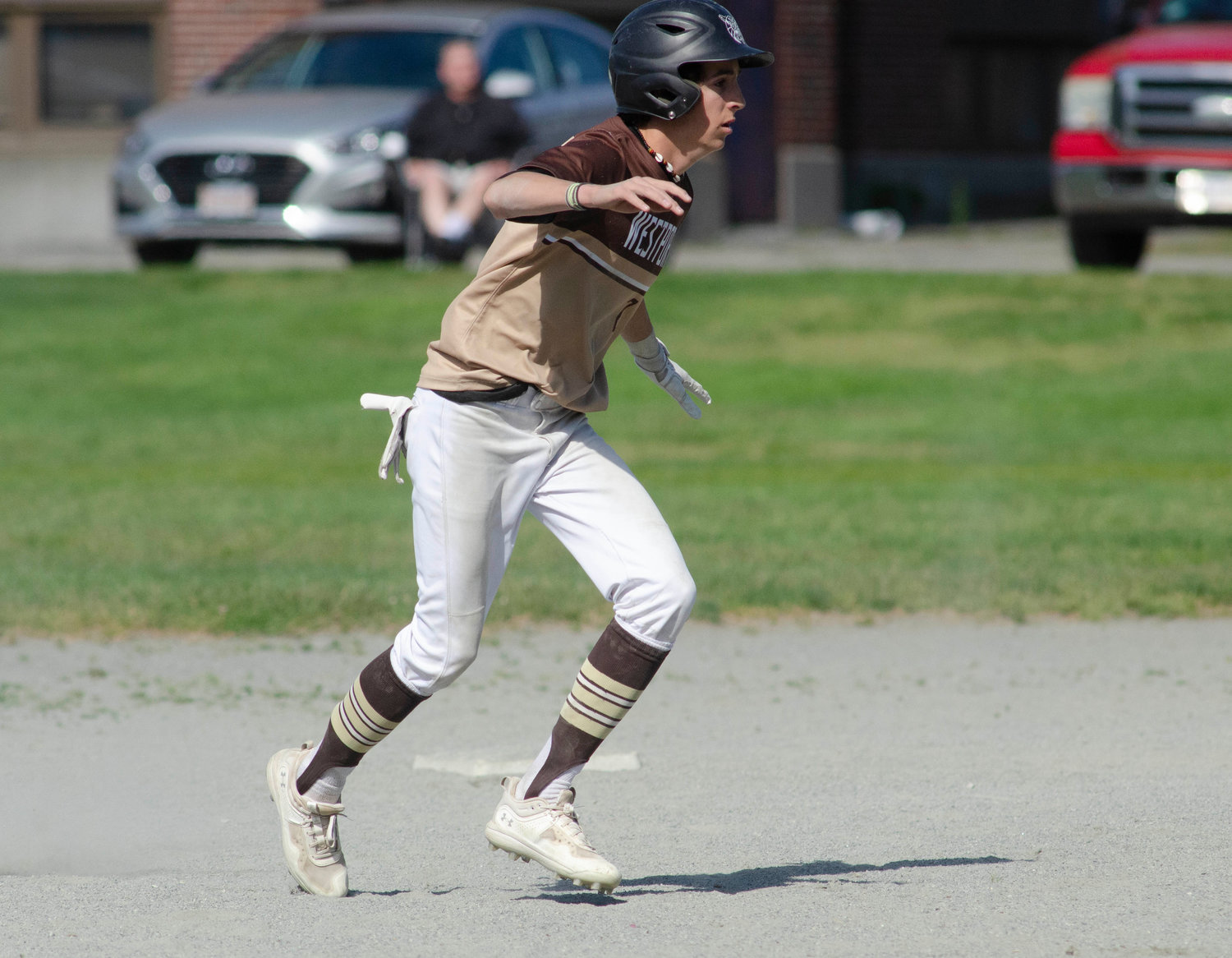 Ben Boudria trots out to a lead during the game. 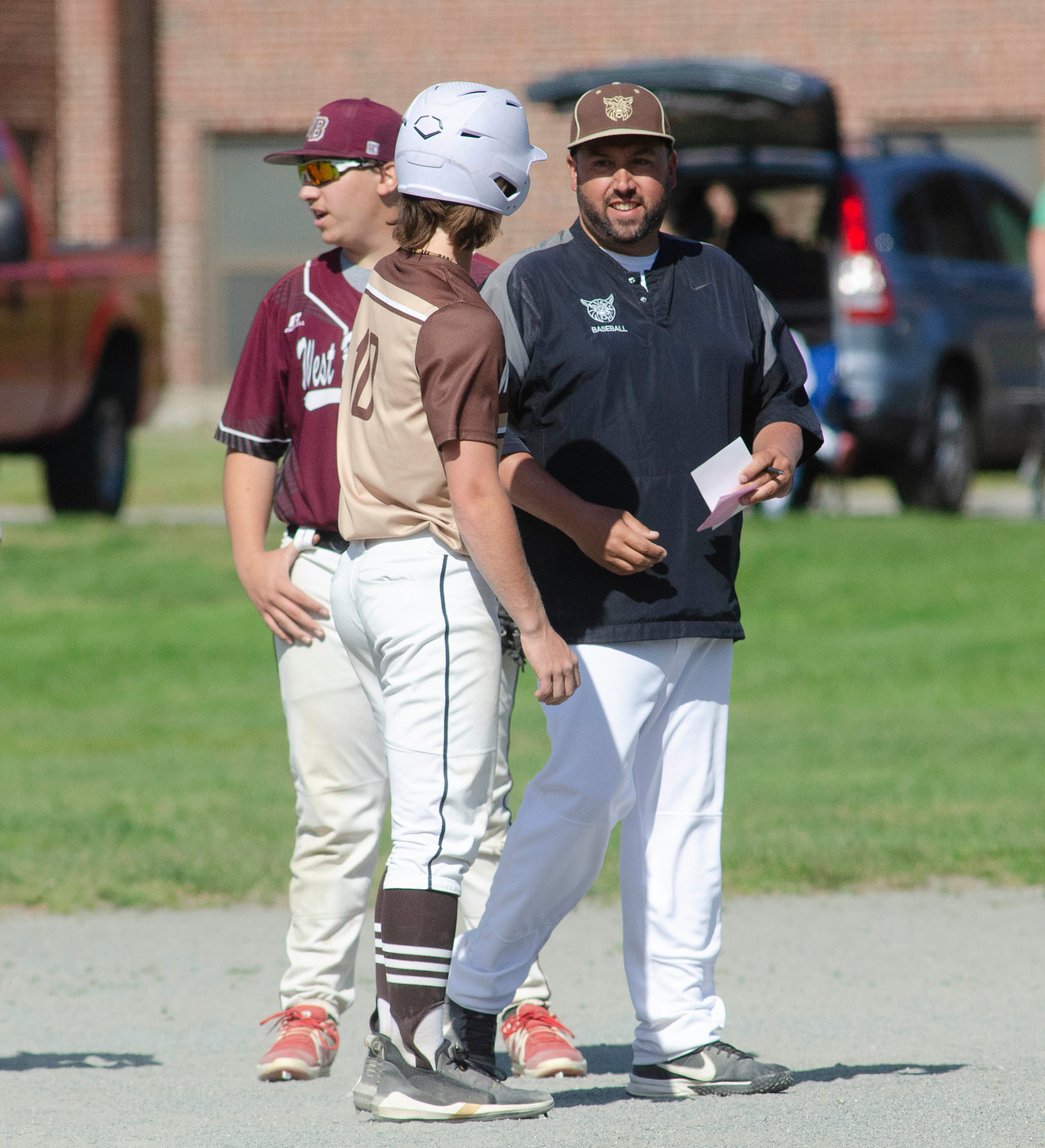 Coach Jason Pacheco speaks to Noah Sowle on second base during a West Bridgewater pitching change. 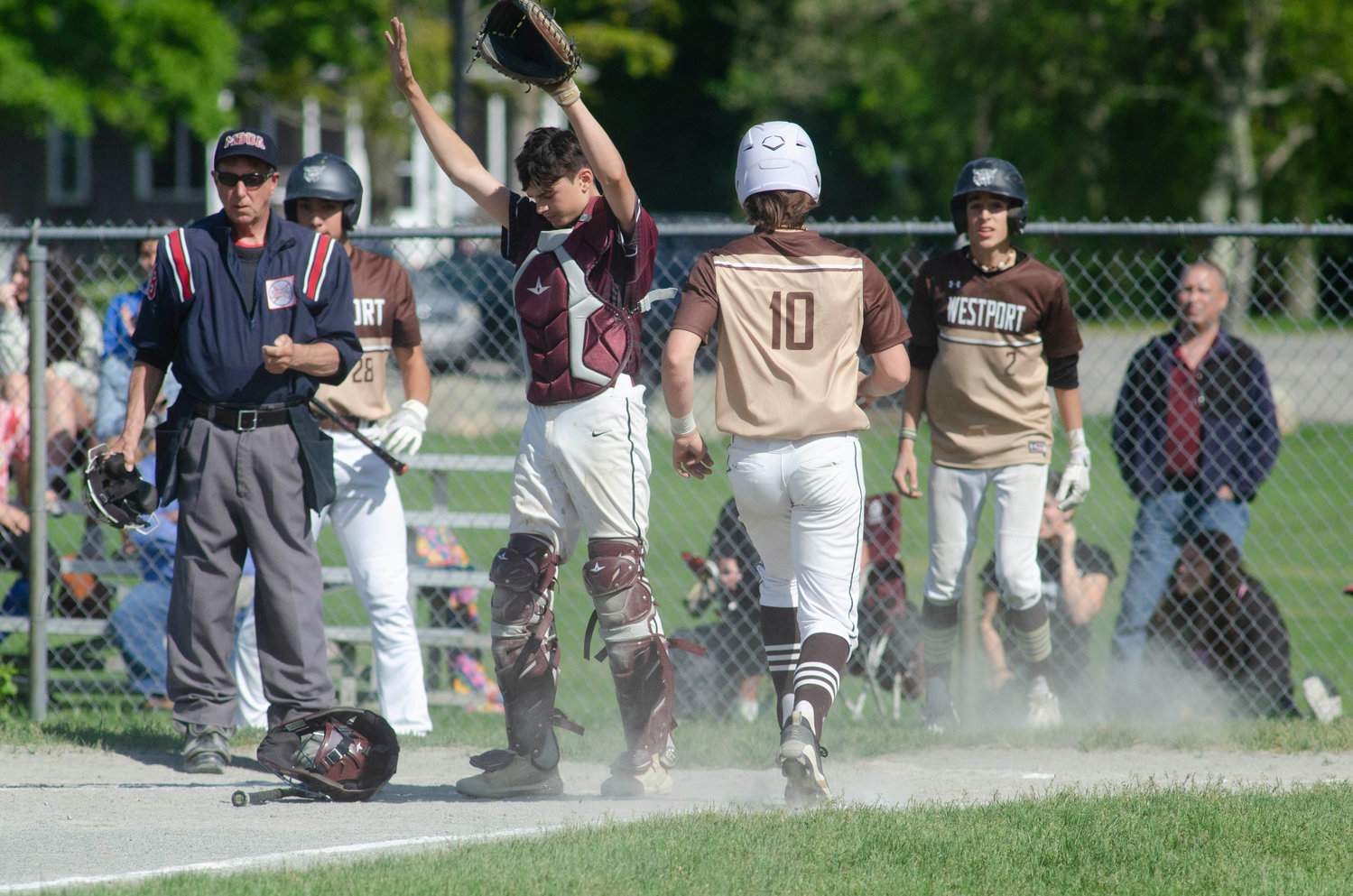 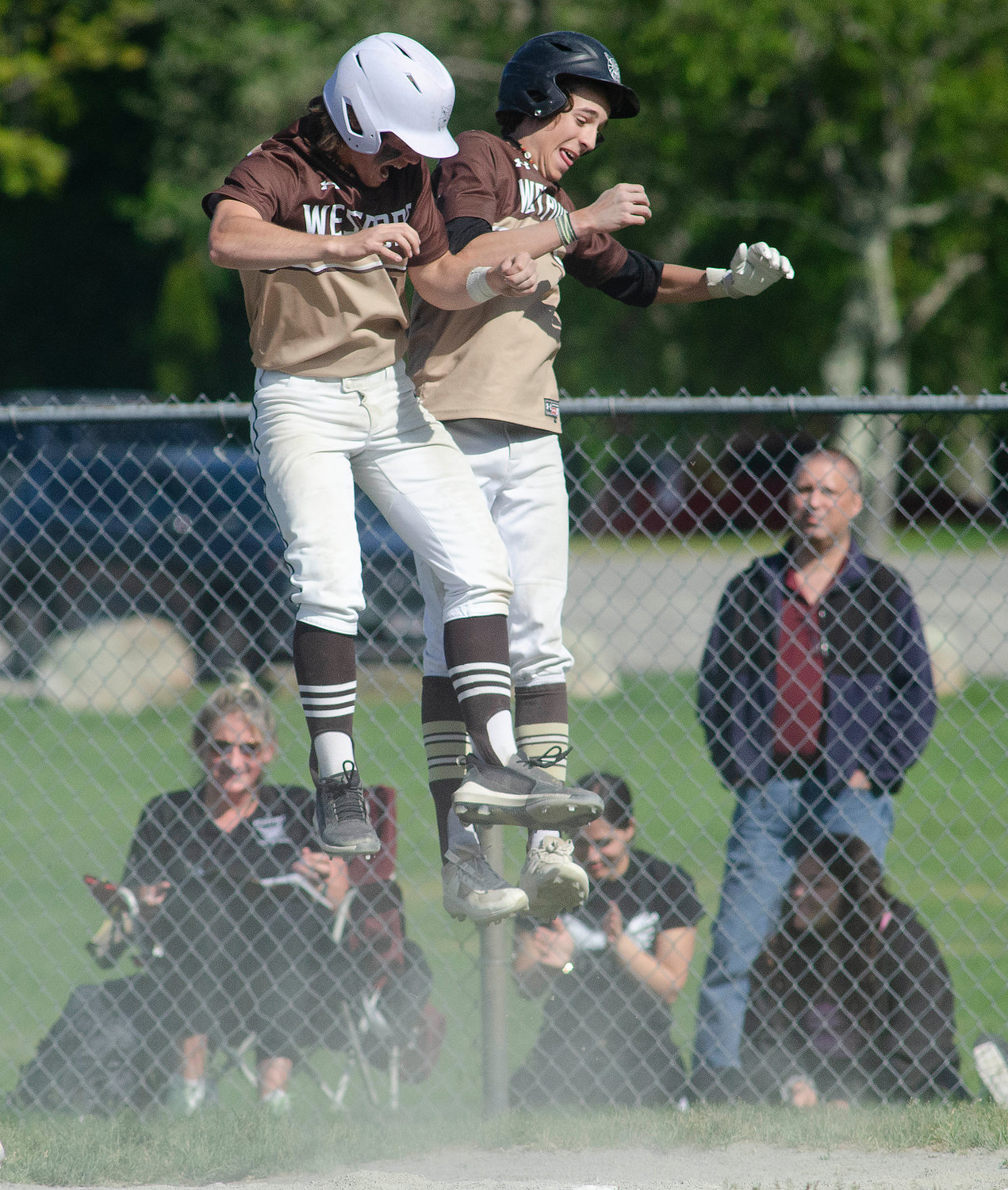 The Westport baseball team scored three runs in the bottom of the seventh inning to overcome a 6-4 deficit and beat West Bridgewater 7-6 during their last regular season home game on Tuesday night.

The crowd was on the  edge of their seats as Wildcats centerfielder Cam Leary broke for home when Luke Finglas hit a roller back to the pitcher, got caught in a suspenseful rundown and then scored the winning run.

“It was fairly lengthy,” Wildcats head coach Jason Pacheco said of the rundown. “Four throws, I believe. Cam managed to slide under the catcher’s tag on the last throw.”

The Wildcats improved their overall record to 10-8 after the win and 6-2 in the Mayflower Athletic Conference.

Westport starter Max Morotti struck out ten and allowed six hits, three walks and six runs in six innings of work. Max Gallant entered the game in relief, struck out two and held West Bridgewater scoreless in the top of the seventh to set up Westport’s wild finish.

The game had several lead changes as West Bridgewater took an early 2-0 lead after the first inning. Wildcats clean up hitter, Connor James singled in the bottom of the second inning, then moved to second on a hit by Finglas and scored on a groundout to the left side by Owen Boudria to cut the West Bridgewater lead to 2-1.

The Wildcats took a 4-3 lead after scoring three runs in the bottom of the third. Ben Boudria, Noah Sowle and Nick Arruda came around to score for Westport.

Arruda, Westport’s senior second baseman had been red hot all game before stepping to the plate with one out in the seventh inning. Arruda, 3 for 4,  2 runs scored and 2 RBI, kept it going, smashing a 2-2 pitch into the outfield for a base hit. He stole second base for his third stolen base of the game. Both Morotti and Leary drew walks to load the bases for clean up hitter Connor James who had his own hot streak going. James, 3 for 4, bashed a double to score Arruda and Morrotti to tie the game 6-6.

Leary respresenting the winning run, ran to third base on the play. Finglas hit a grounder back to the West Bridgewater pitcher. Leary running on the pitch, got caught in a rundown when the pitcher threw home. The slippery outfielder was able to out duel the infielders and slide under the catcher’s tag to win the game.

“We struggled early in the season," said Coach Pacheco. "But we managed to turn our season around over our last twelve games."

The Wildcats who started the season 1-5, went 9-3 to end the season and clinch a playoff birth. The team is expecting to travel for their first playoff game on Friday June 3. But Coach Pacheco said the team will know more after the brackets are released on Wednesday.