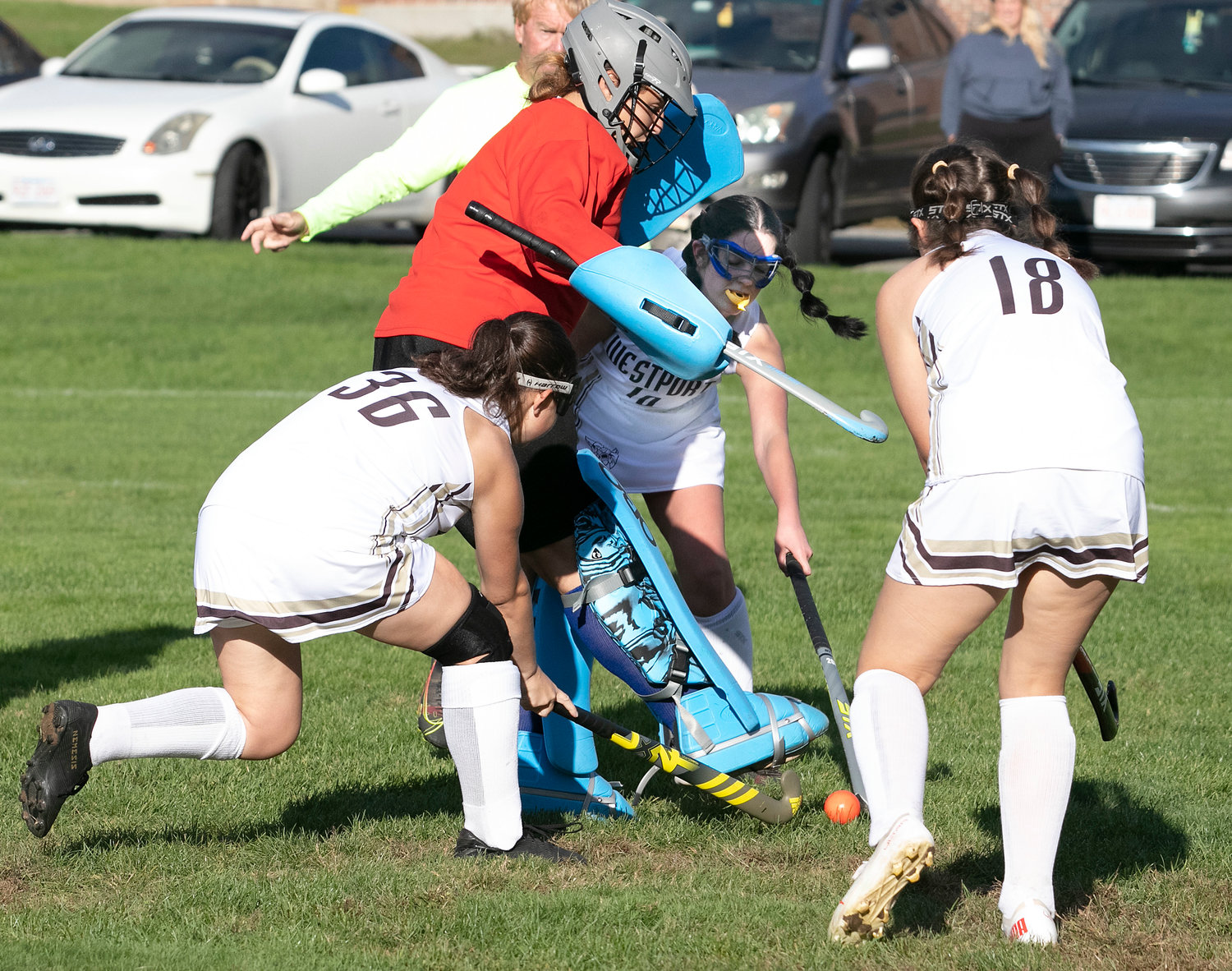 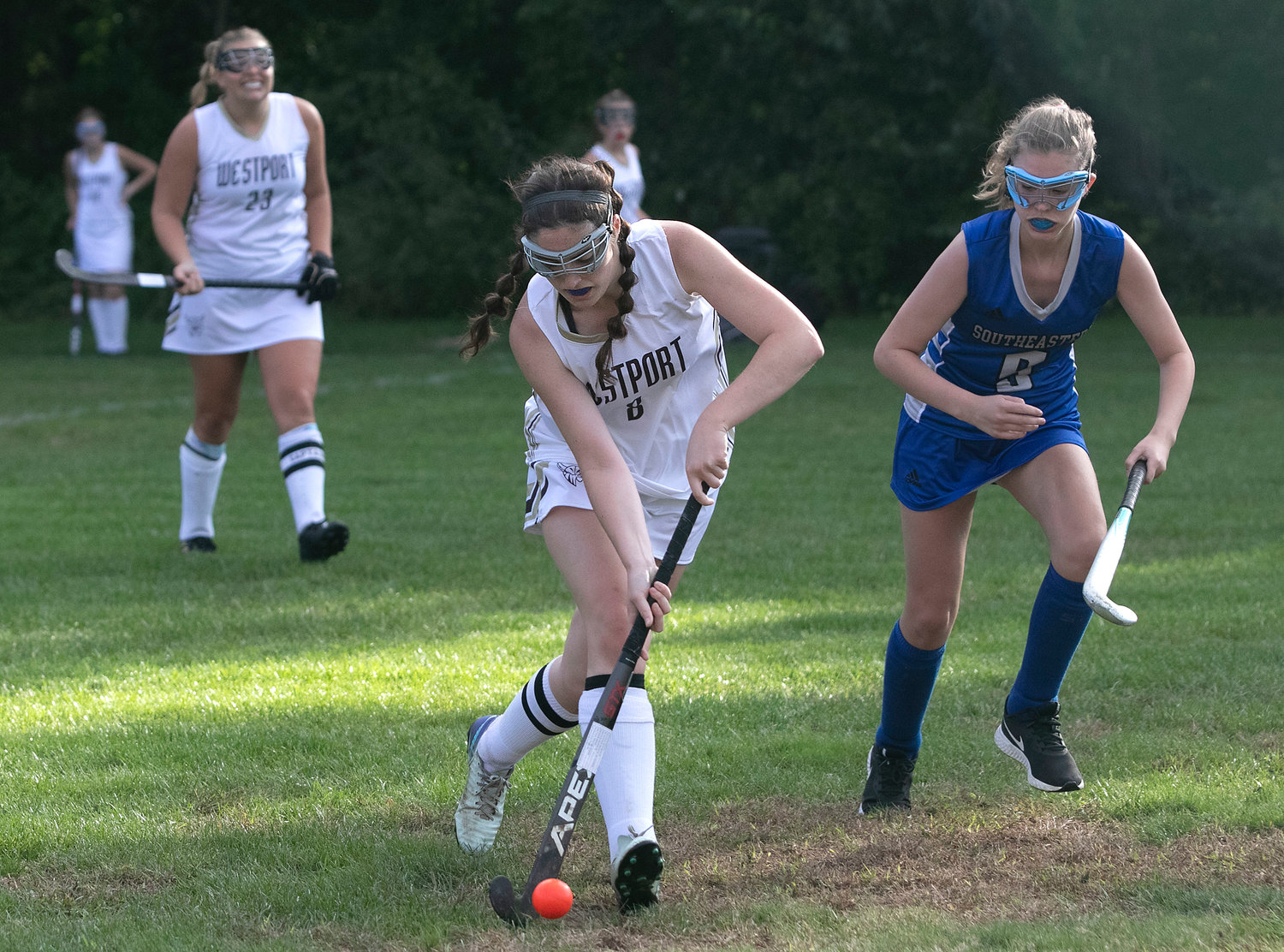 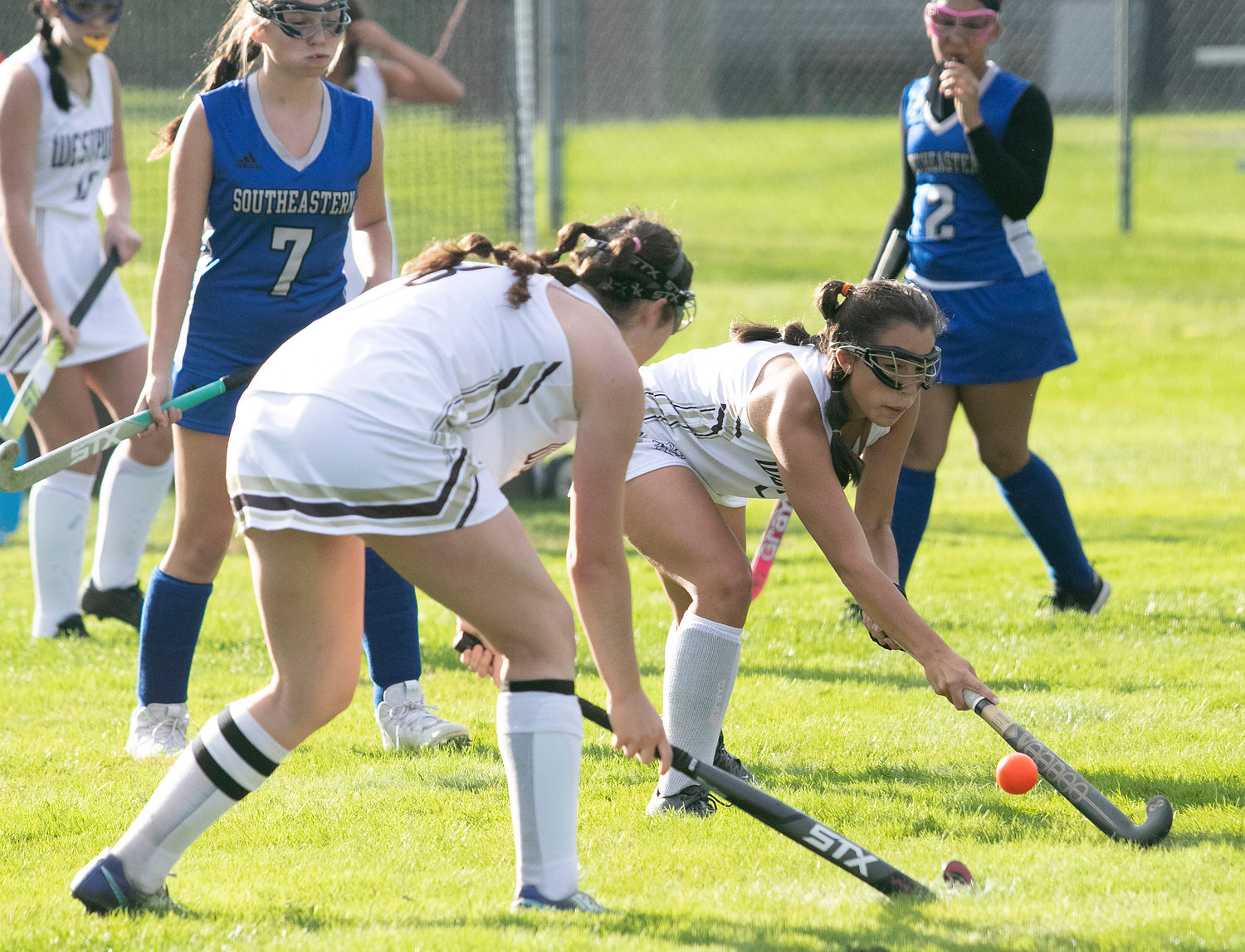 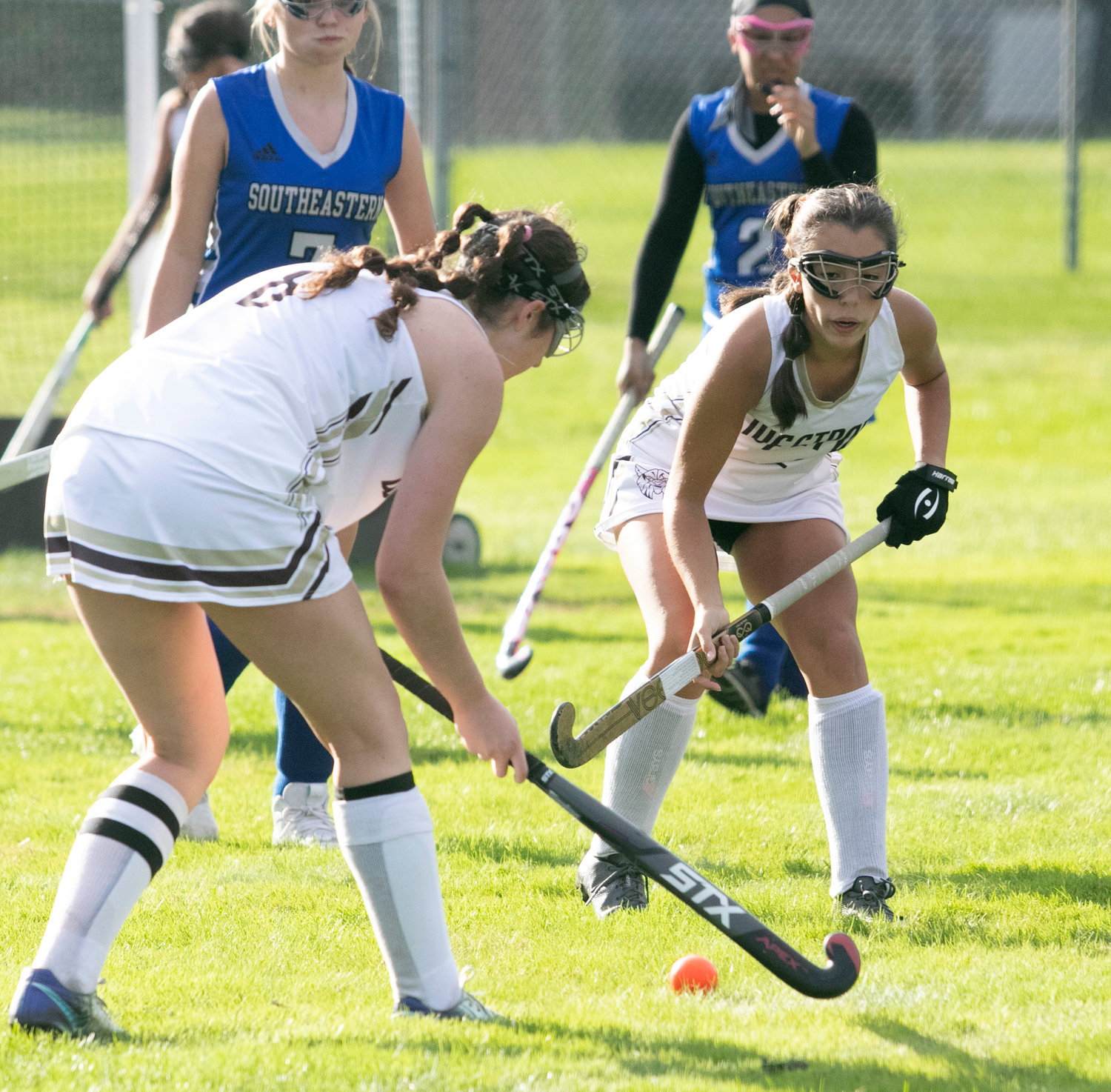 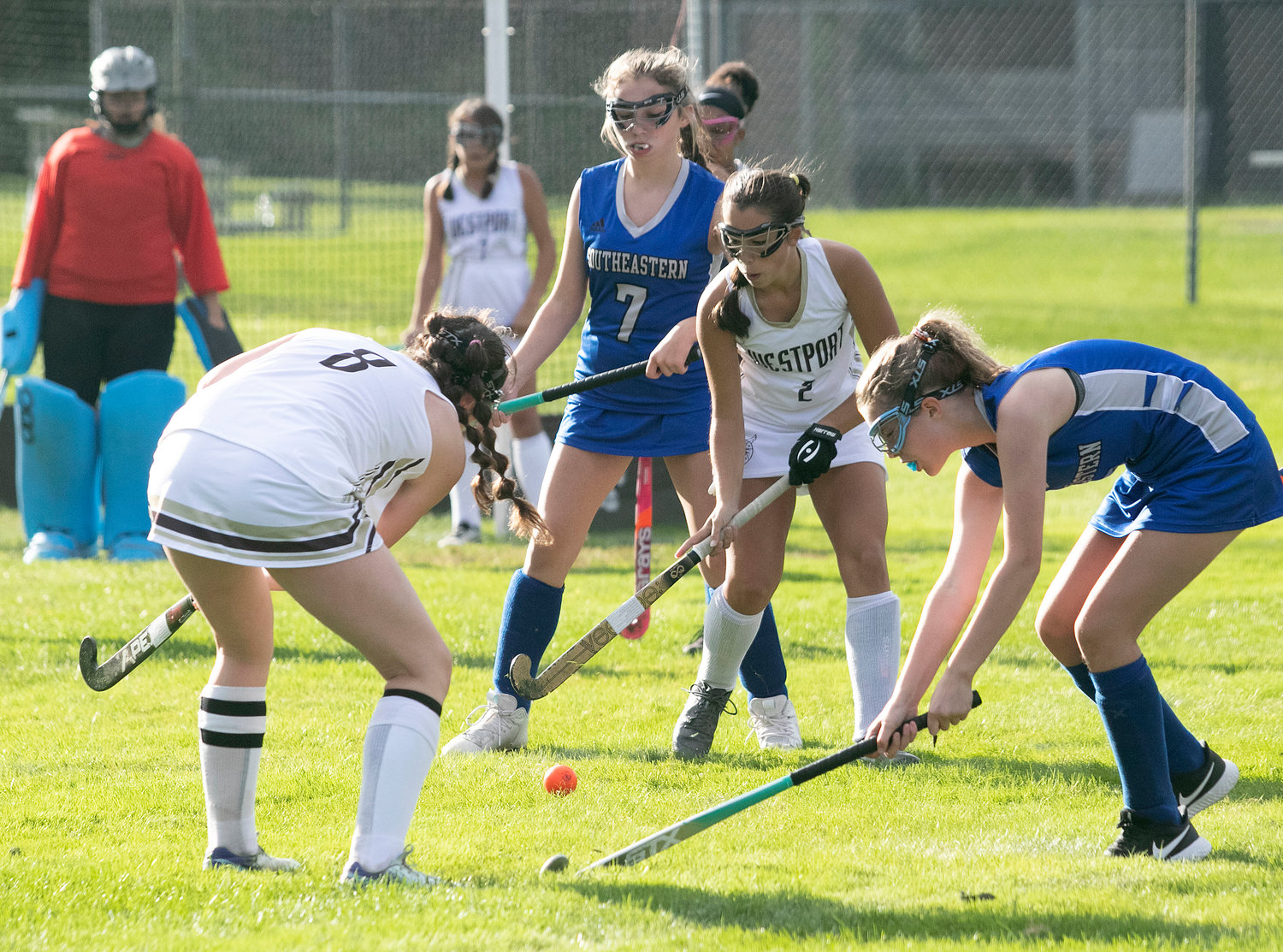 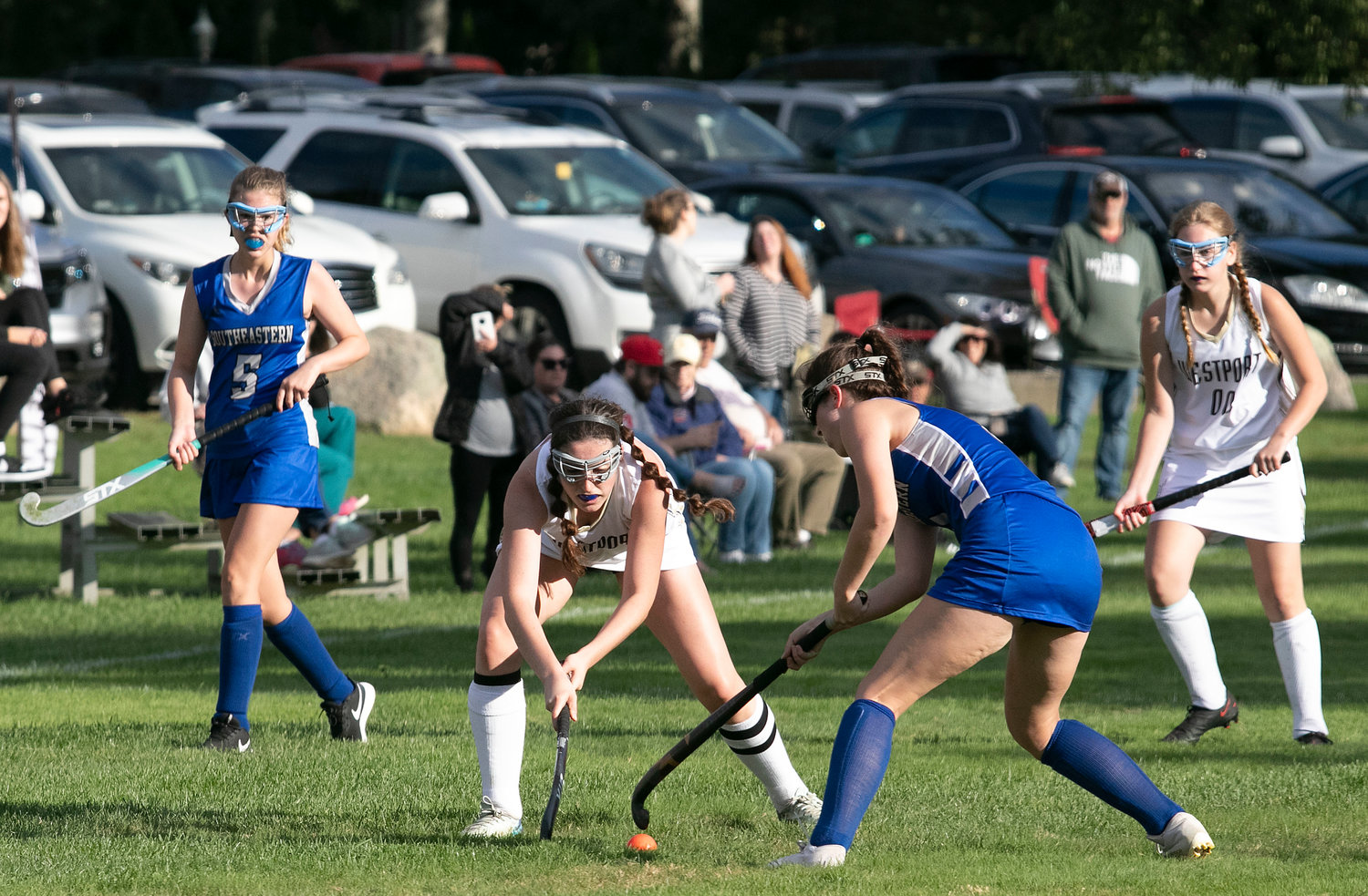 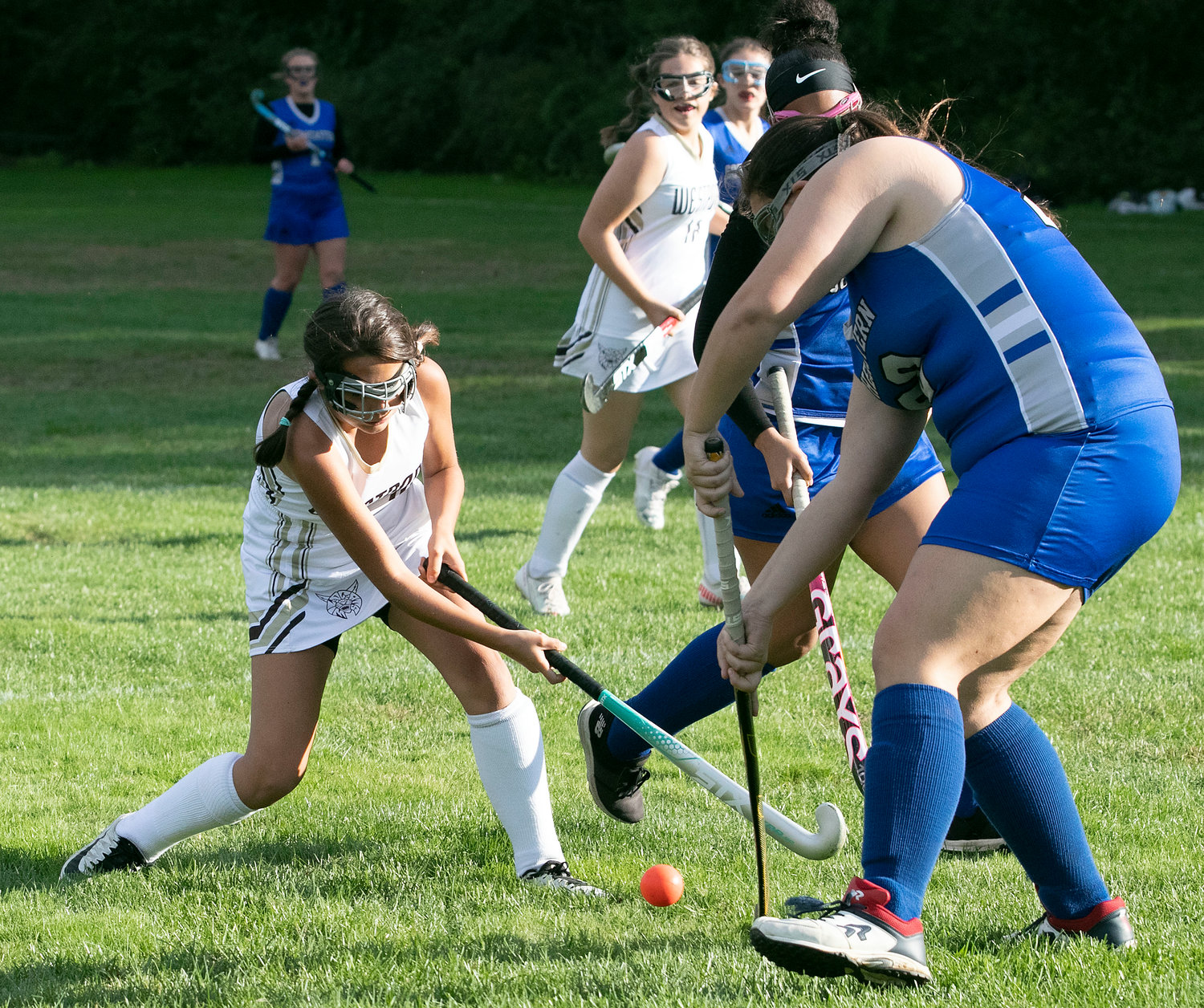 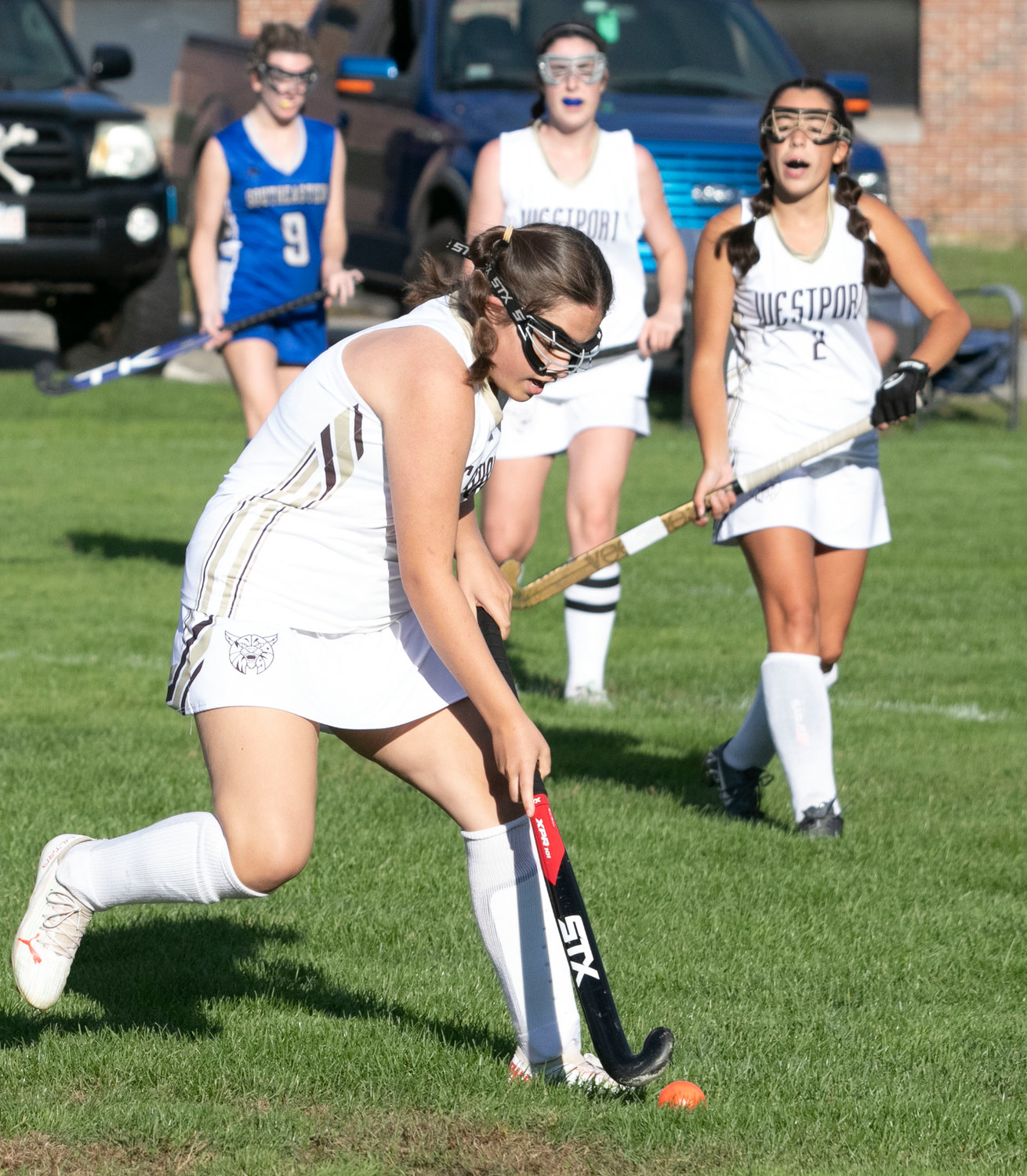 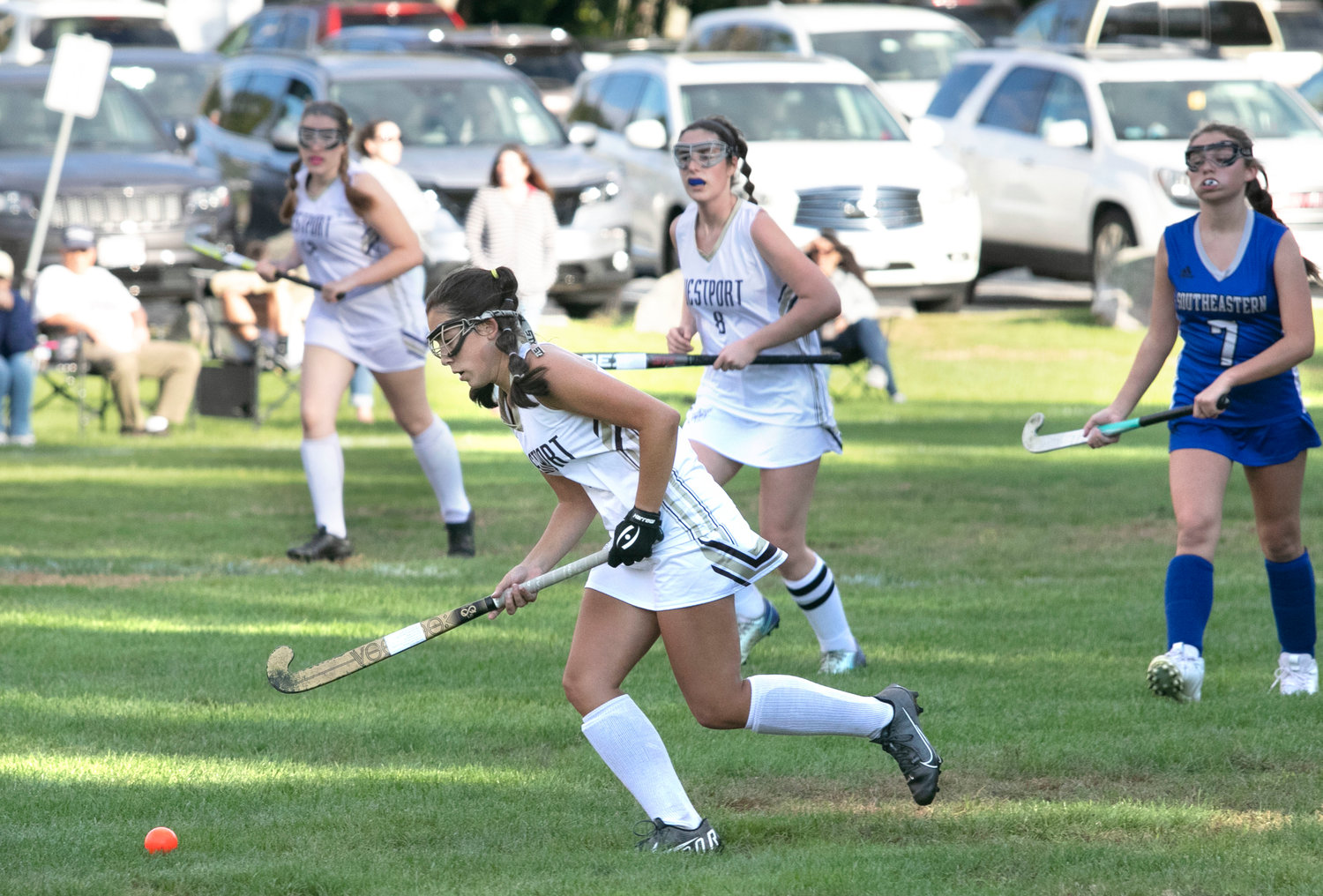 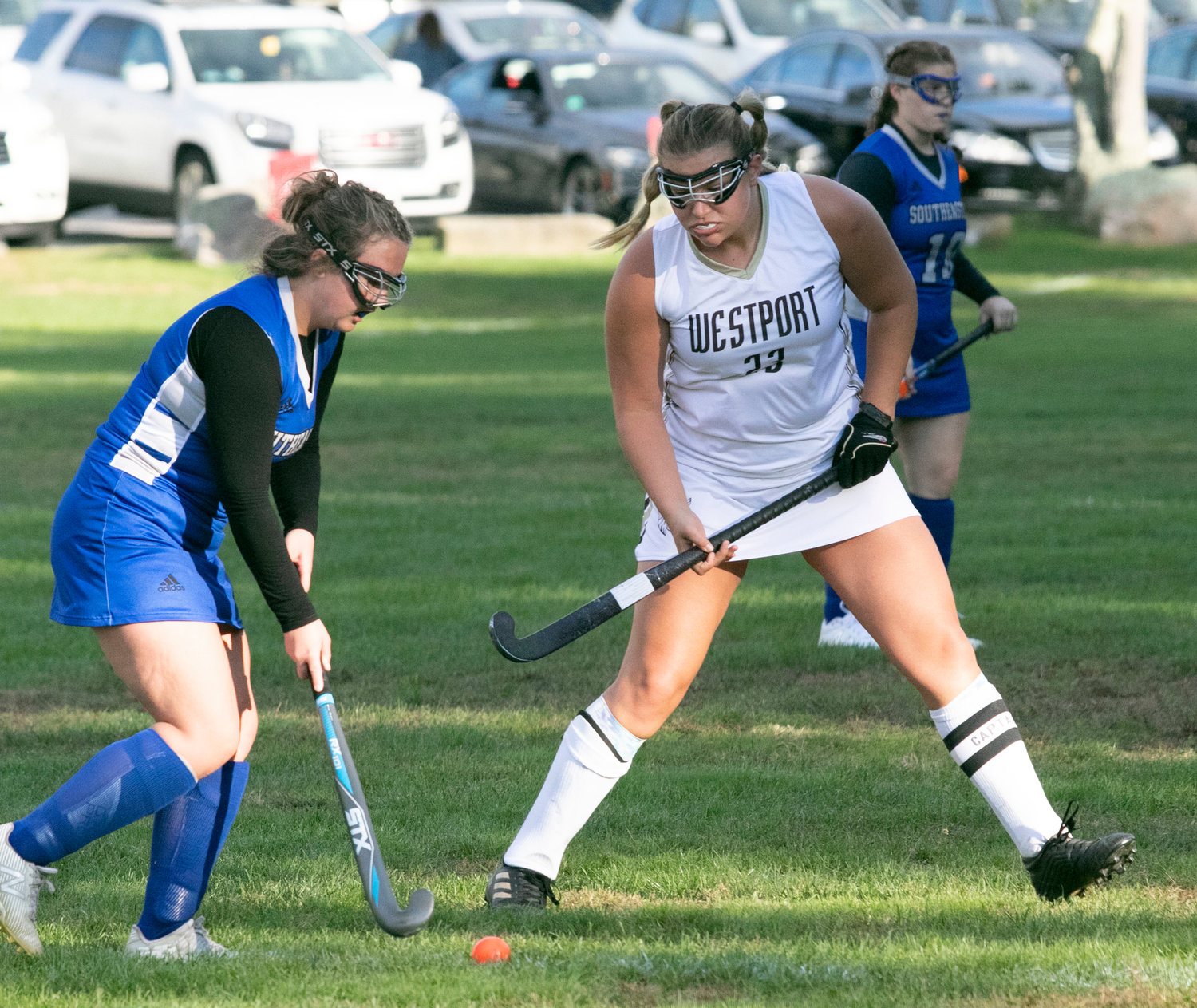 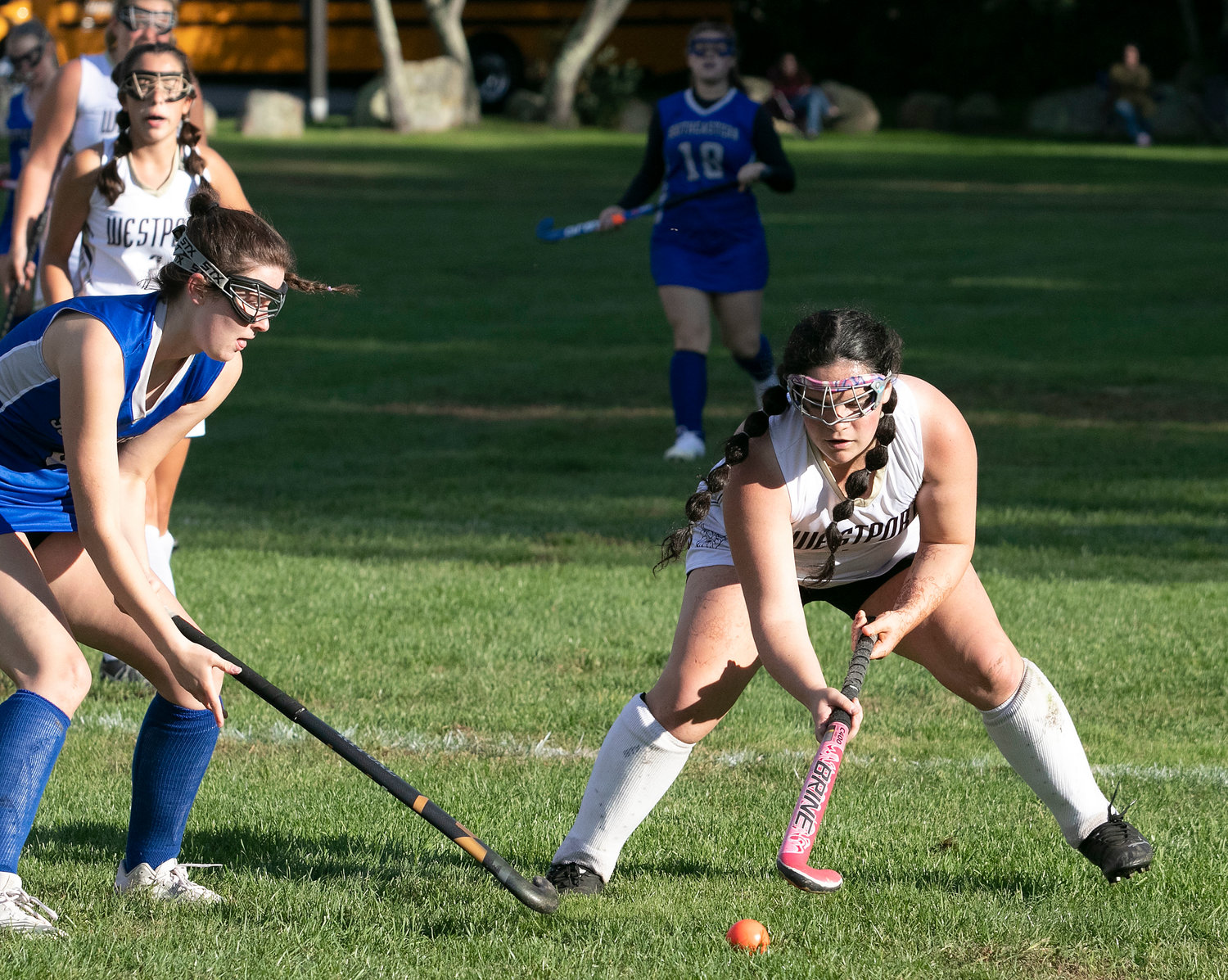 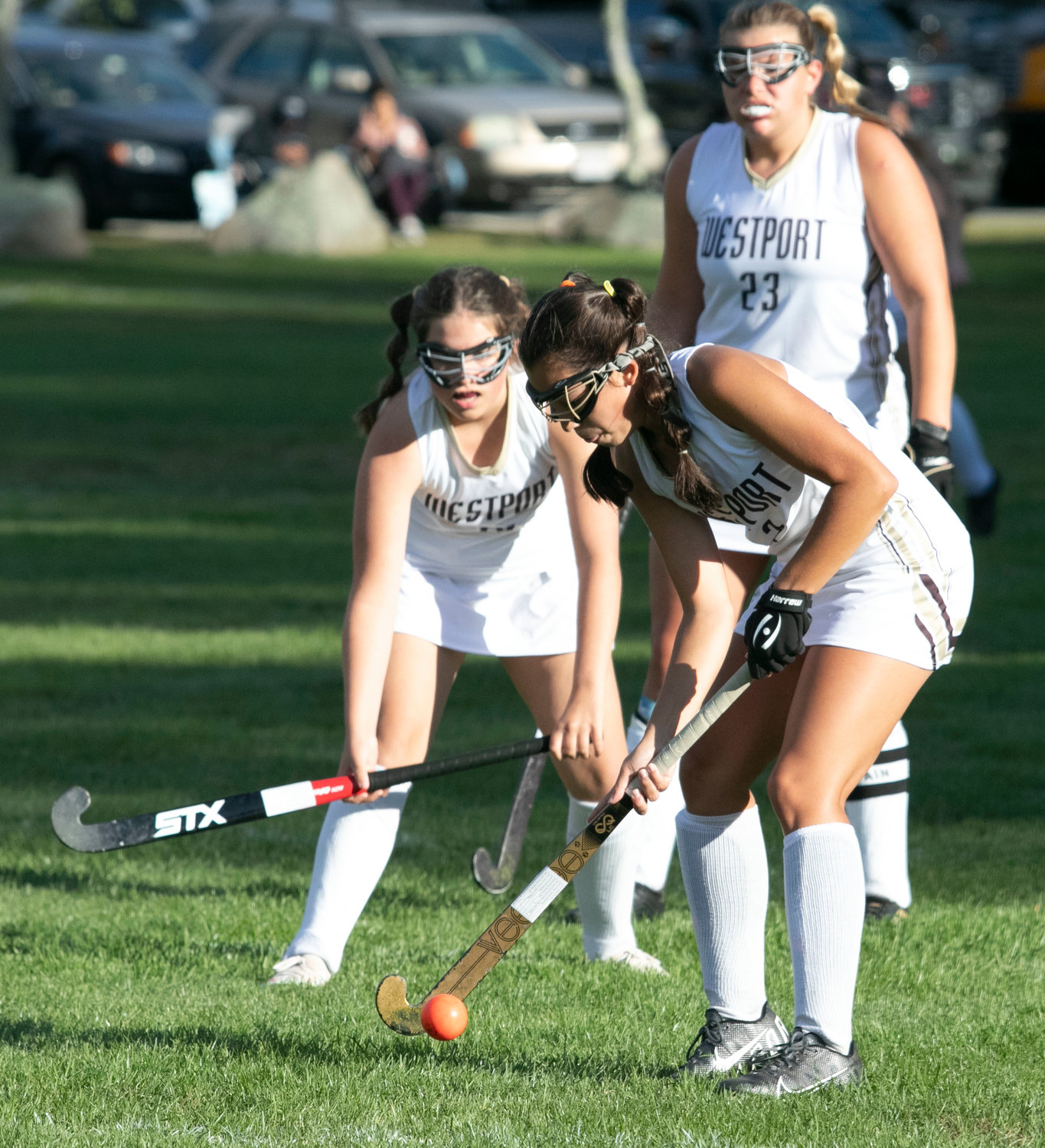 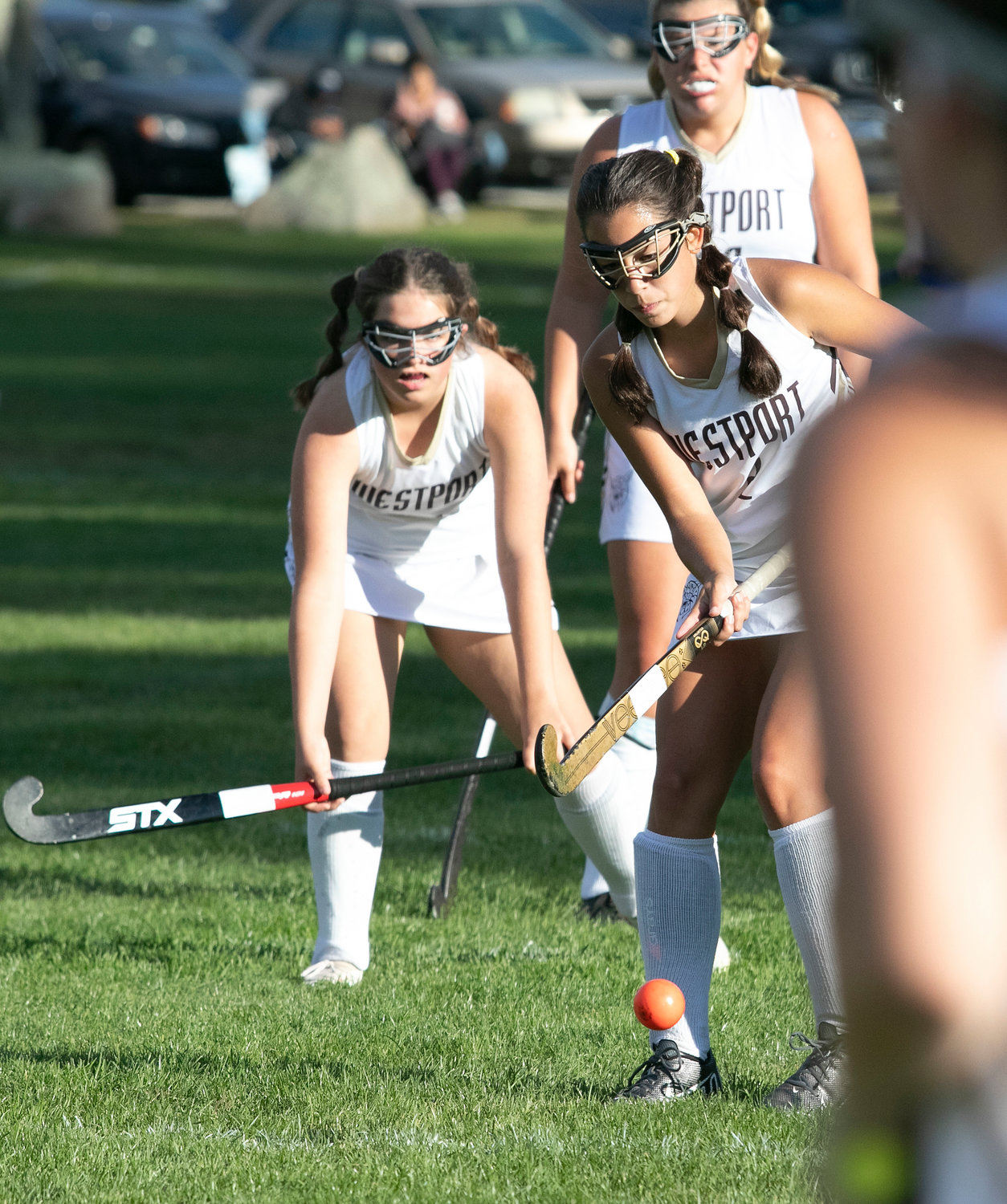 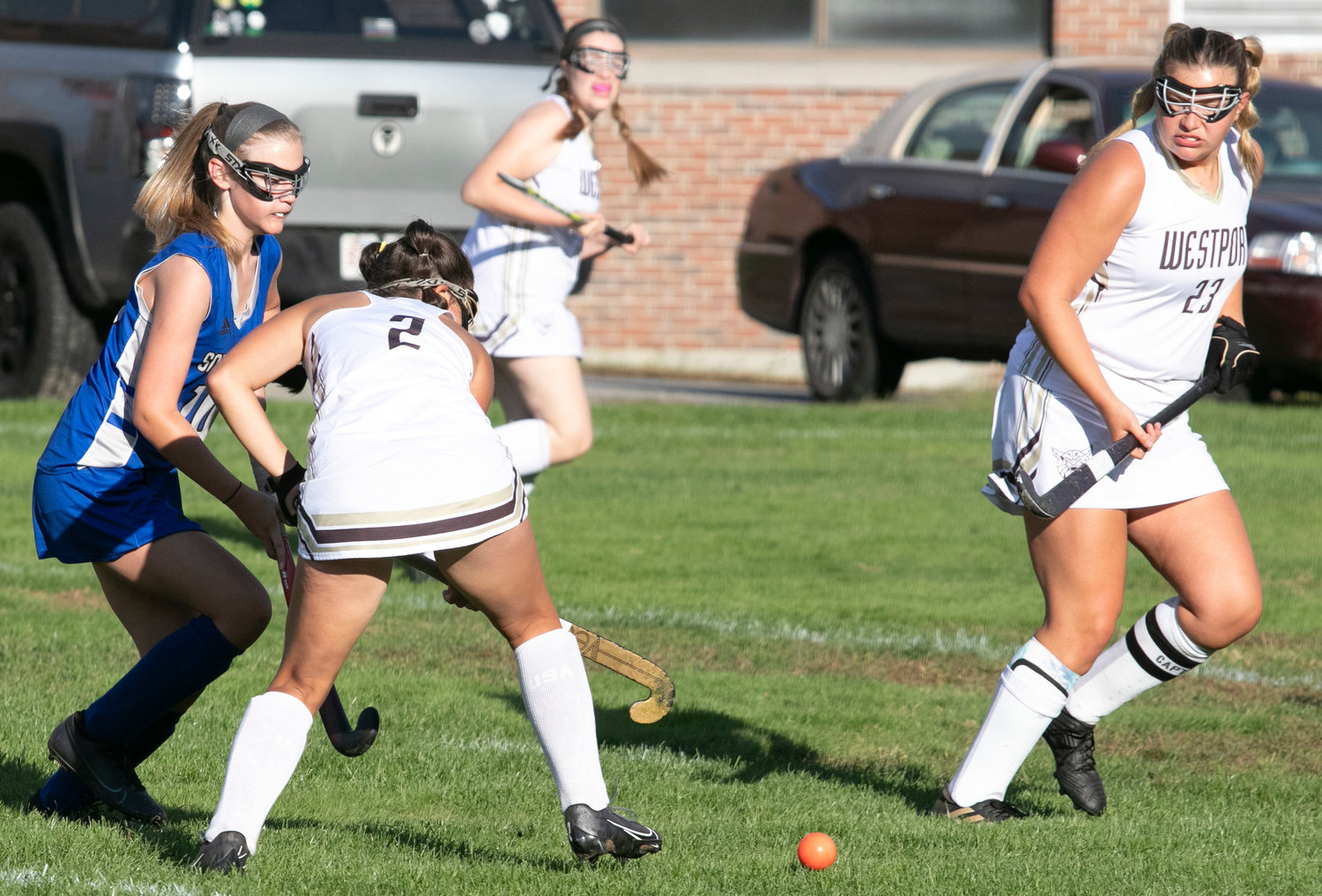 The Westport field hockey team shut out Southeastern Regional Vo-tech, 5-0, during a home game on Thursday afternoon. The Wildcats improved their Mayflower Division record to 5-2-1. Freshman forward Emma Bessette scored twice and seniors Kyra Ferreira and Meg Leuvelink and seventh grader, Kaylin Pacheco each scored once for the Wildcats as second year head coach, Jacquelyn Legendre had the team firing on all cylinders.

The team began the season with a tie against Fairhaven. The Wildcats won three straight against Bourne, Sturgis and Southeastern, then lost to Case and West Bridgewater. And now are on a two game winning streak after beating Wareham and skunking Southeastern.

The Wildcats' strength is at midfield and on defense. Mids, Kyra Ferreira and Avery Avila, are strong forces on offense said Coach Legendre. They carry play through the middle of the field and help out junior center forward, Molly Bazinet.

“Molly is a great playmaker,” said Coach Legendre. “She’s the key to the offense getting the ball up the field. She doesn’t always get the glory of scoring, but without her, the other goals wouldn’t happen.”

In her post game comments with the team, coach Legendre named Bazinet the player of the game, for her hard work and determination.

“Molly is aggressive and she always knows where to be,” said senior co-captain Sarah Carney. “She has a positive attitude and she is always in the right spot. ”

Coach Legendre, a Westport resident and business and computer teacher at the high school, began playing field hockey in fifth grade. She played the sport at Westport through middle school and at Bishop Stang during high school.

“I played field hockey from fifth grade till the end of my college career at Bridgewater State,” Coach Legendre said. “I’m a Westport native. I’ve lived here my entire life. I love the community.”

“I absolutely love it,” she said about coaching the team. “It has been a really great season so far.”

Ferreira and Carney are the teams co-captains. Lily Gifford is the team’s goalkeeper and forwards, Leuvelink and Raurie Laliberte provide leadership through their play and their voices on the field.

Gifford and the Wildcats' team defense, have recorded six shut outs this season. “Lily is a rockstar in net,” Coach Legendre said. “She’s always knocking it down for us.”

Carney is the team’s center back. “She is a leader and has a strong presence on the field. She’s vocal and tells the girls where to be,” said Coach Legendre.

“The strength of our team is defense and we are working on building a strong offense as well,” said Carney. “Lily has really found her voice on defense, and that’s new this season. She’s been giving us a lot of direction, so we don’t get in her way, and we know which girls are open.”

“She plays from end line to end line and all over the field,” said Coach Legendre. “She is a year round field hockey player, and a returning all star for us. She has strong stick skills, and is a key player on offense and defense.”

Sweeper Emma Bessette scored two goals for the Wildcats against Southeastern. The freshman has been a big help on defense this season as well. “Emma has strong stick skills. She’s great at getting the ball out of the zone and up the field,” Coach Legendre said.

“The goal this year is to make states,” said Carney. “We are hoping to win at least a game or two.”