Wildcats host tenth seeded KIPP Academy in round of 16 on Tuesday.

Wildcats host tenth seeded KIPP Academy in round of 16 on Tuesday. 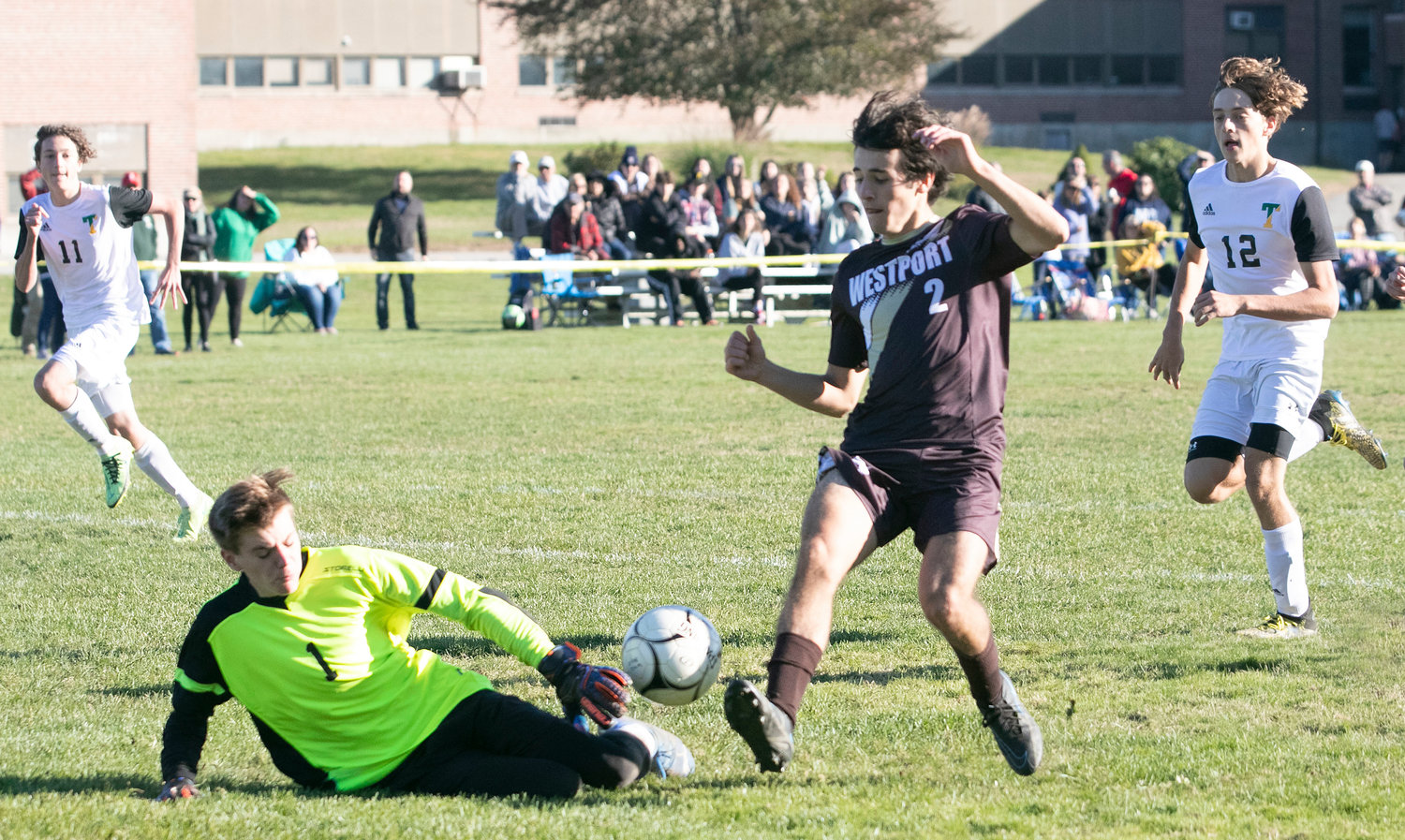 Striker Hunter Brodeur dribbles over Braves goalkeeper Tim Parsons and taps the ball into the net for his second goal of the game to give Westport a, 3-0 lead in the second half.
Photos by Richard W. Dionne, Jr. 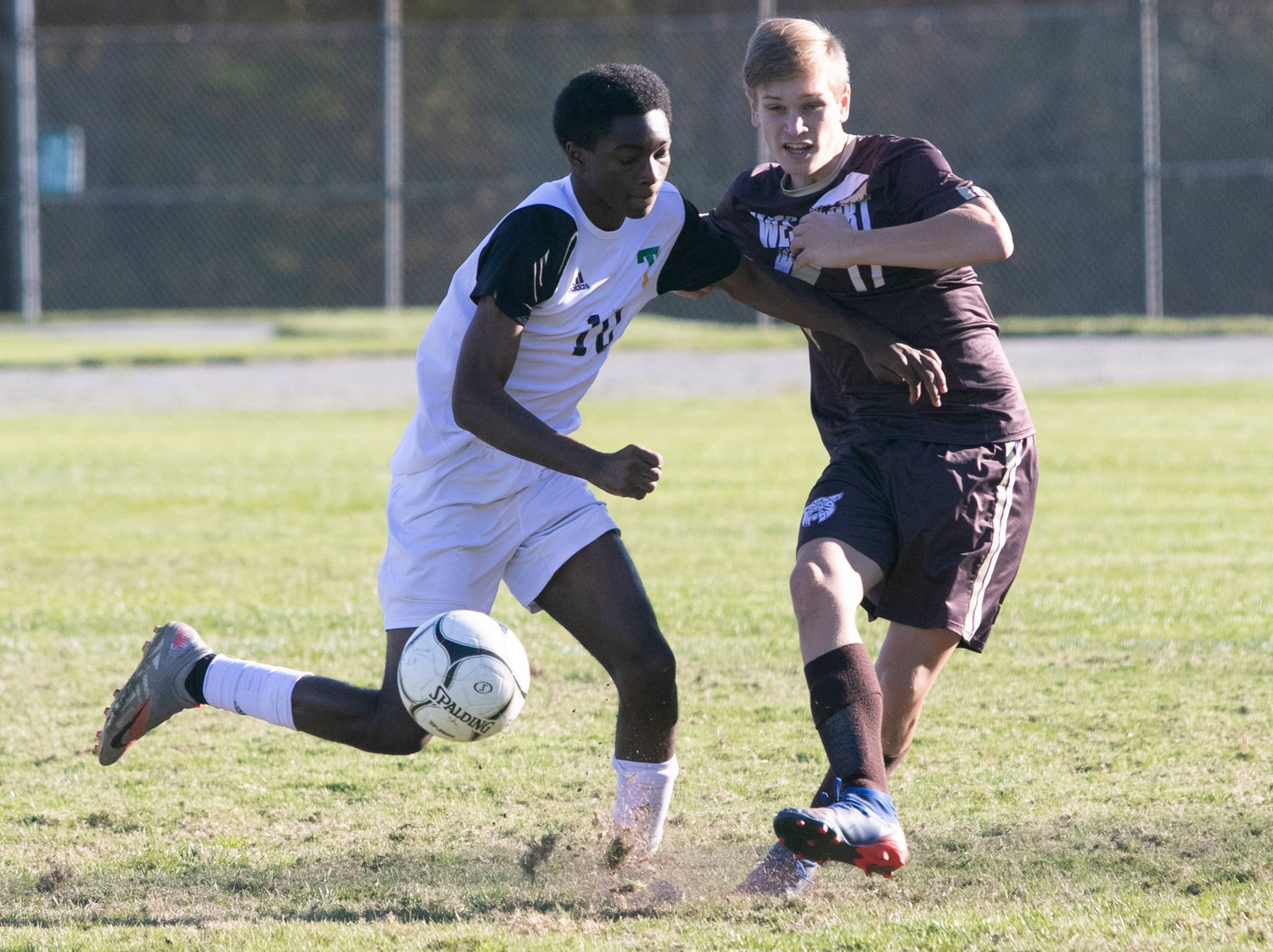 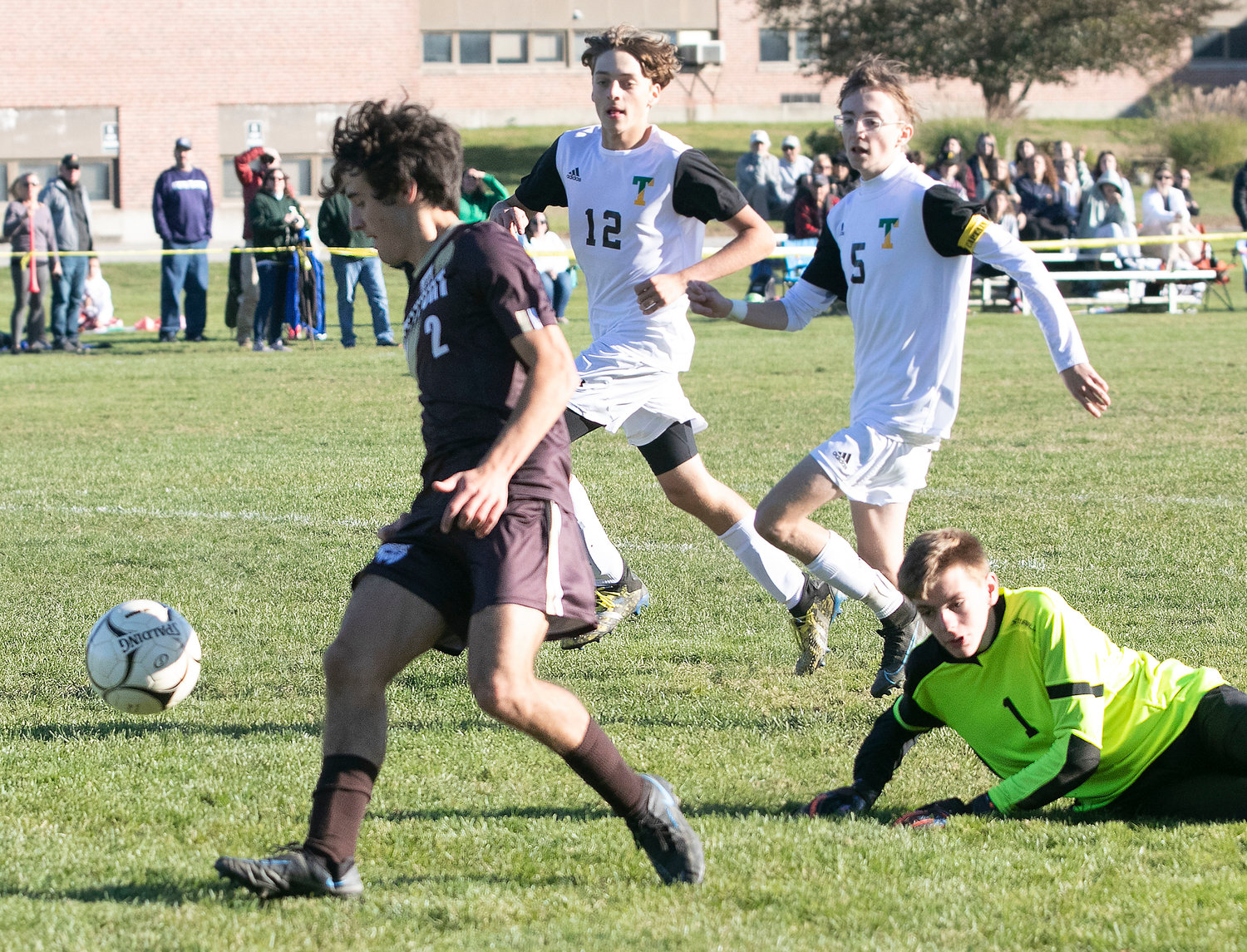 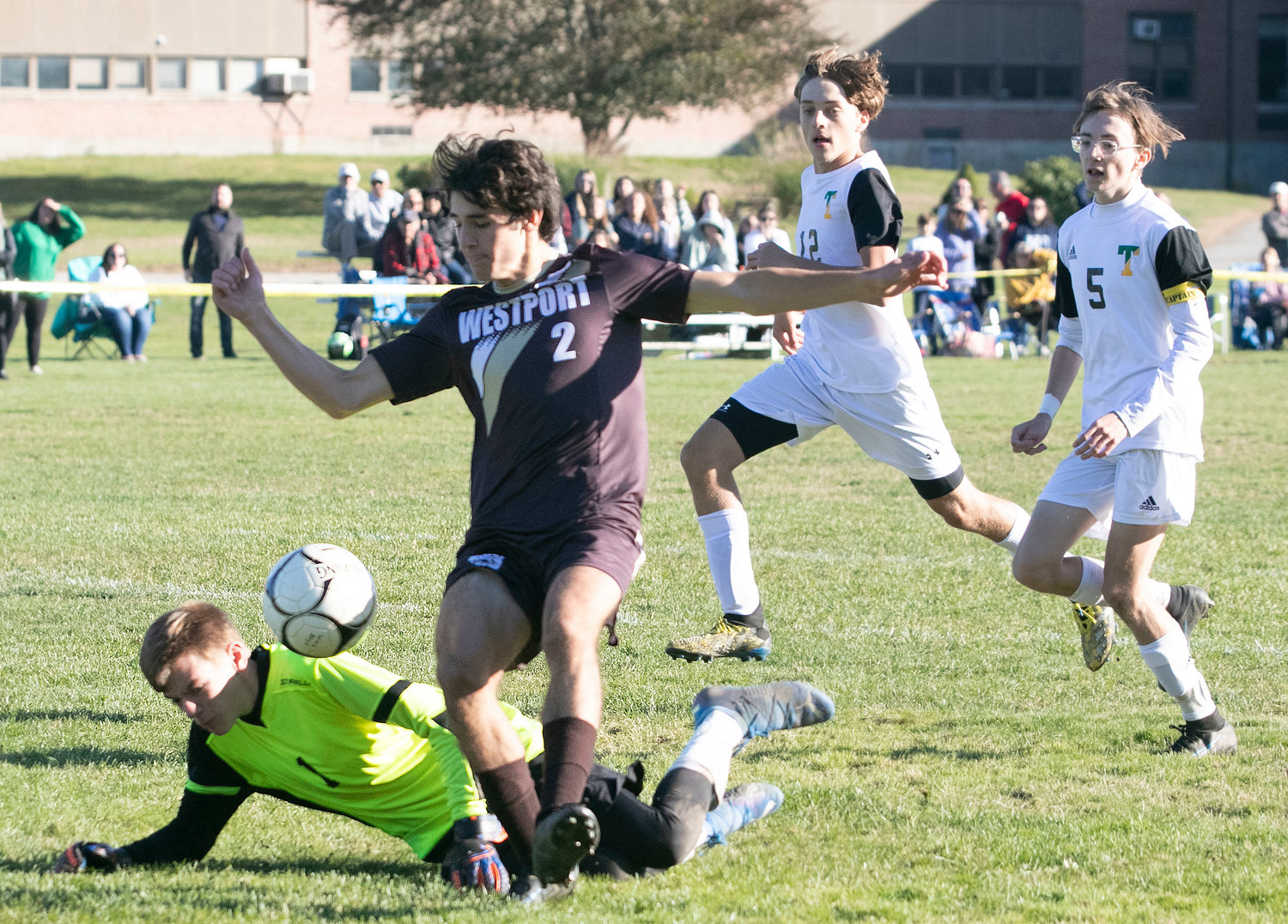 Striker Hunter Brodeur dribbles over Braves goalkeeper Tim Parsons and taps the ball into the net for his second goal of the game to give Westport a, 3-0 lead in the second half. 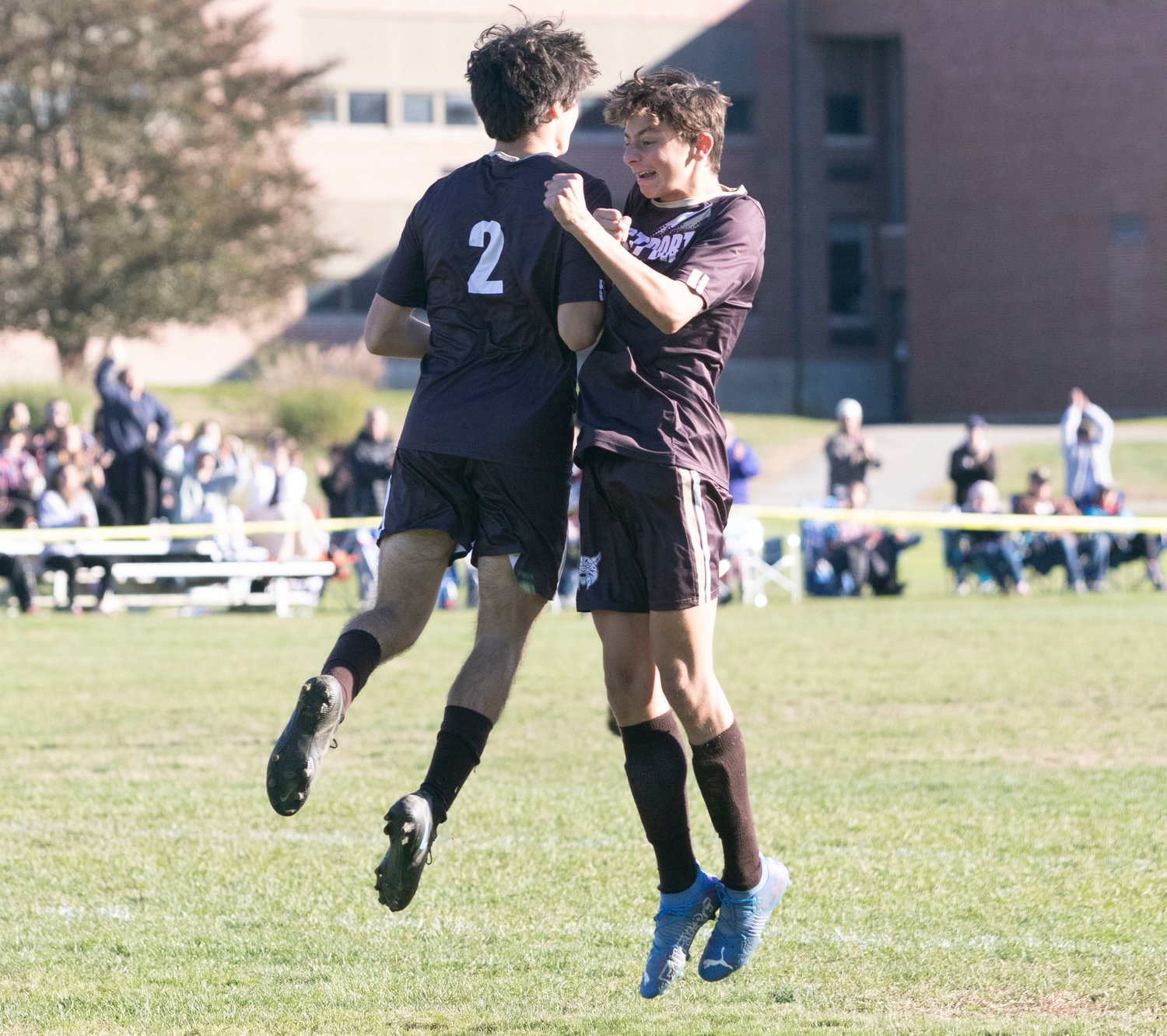 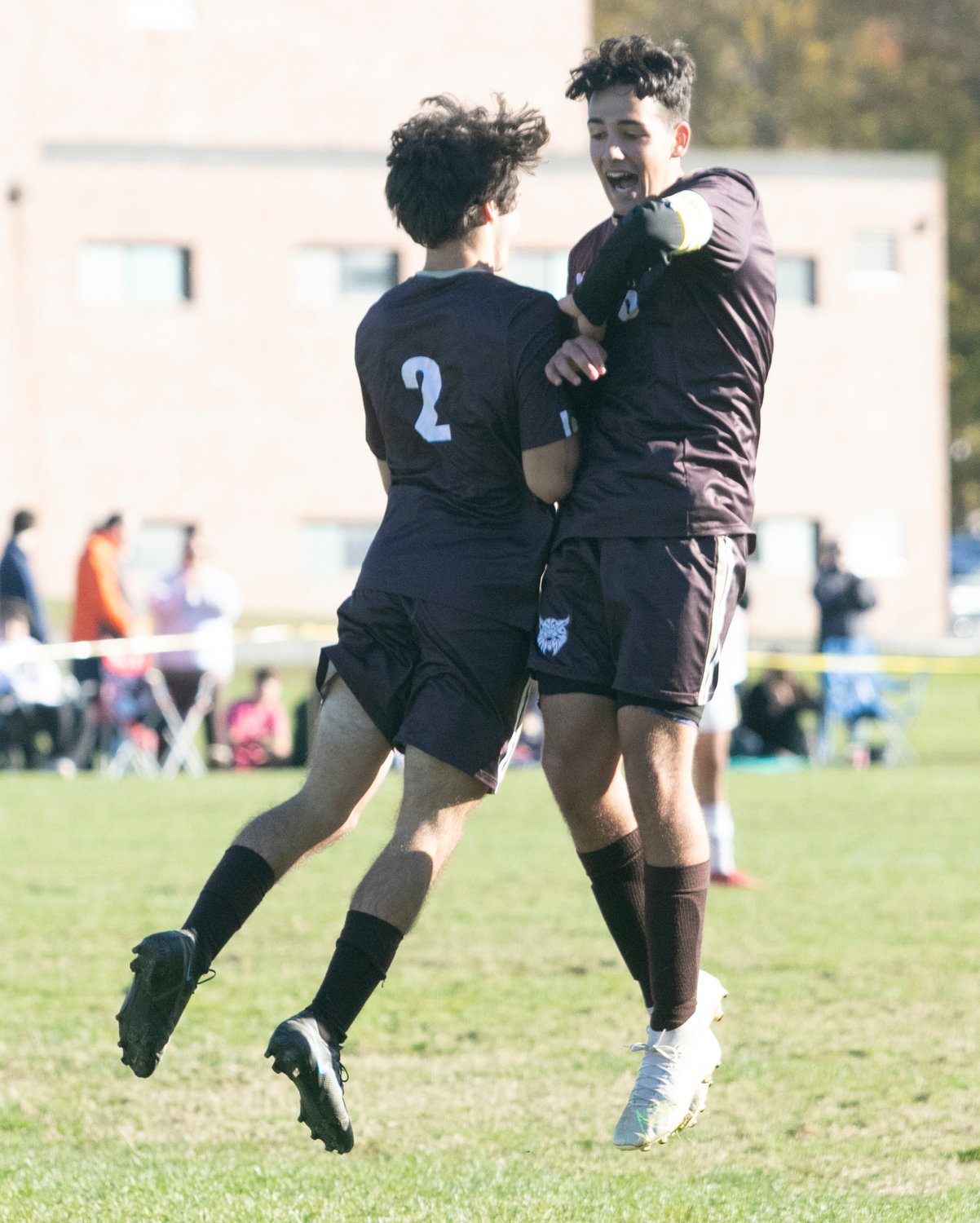 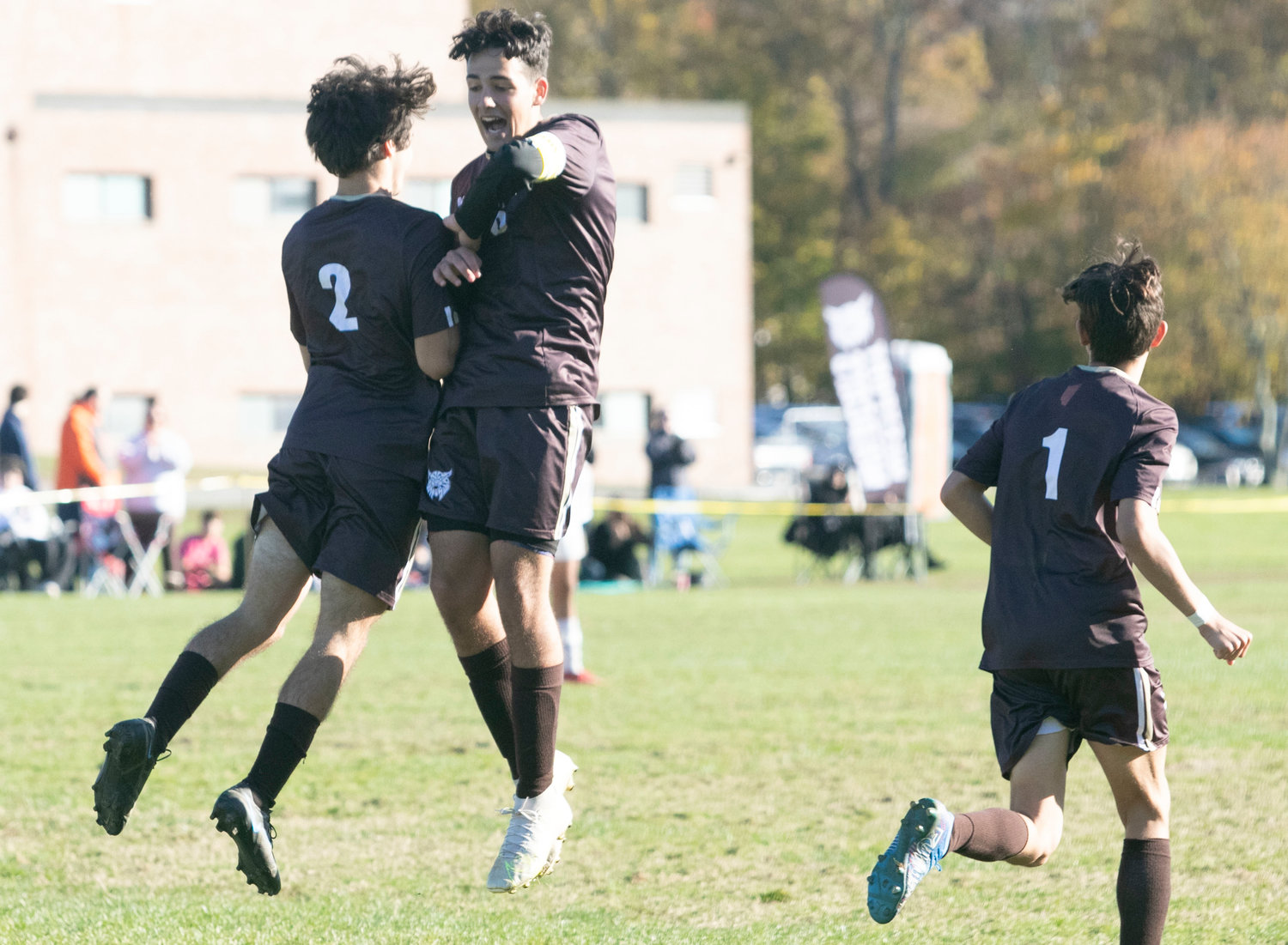 Hunter Brodeur (left) celebrates with Dom Vitorino after scoring his second goal of the game to give Westport a 3-0 lead in the second half. 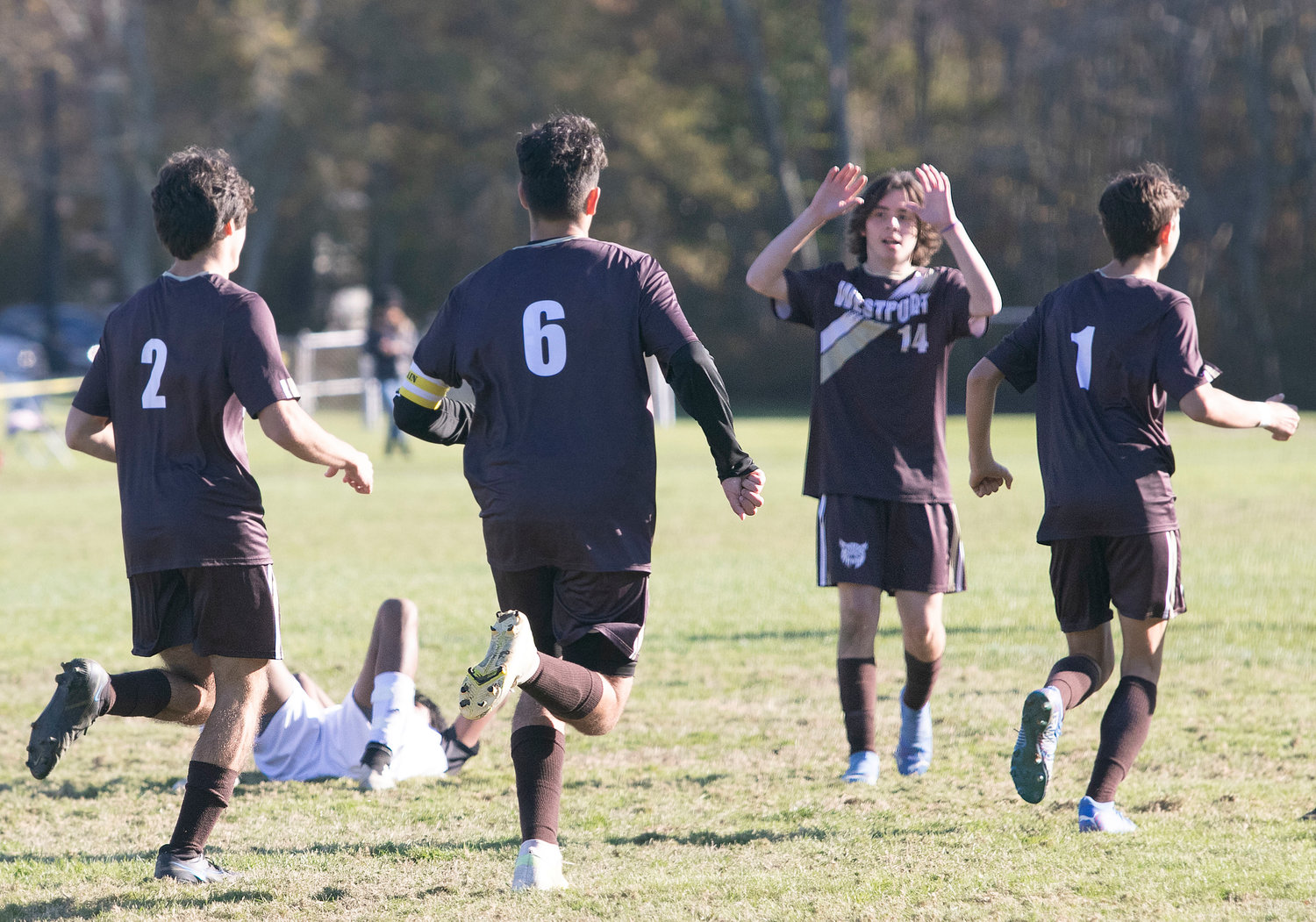 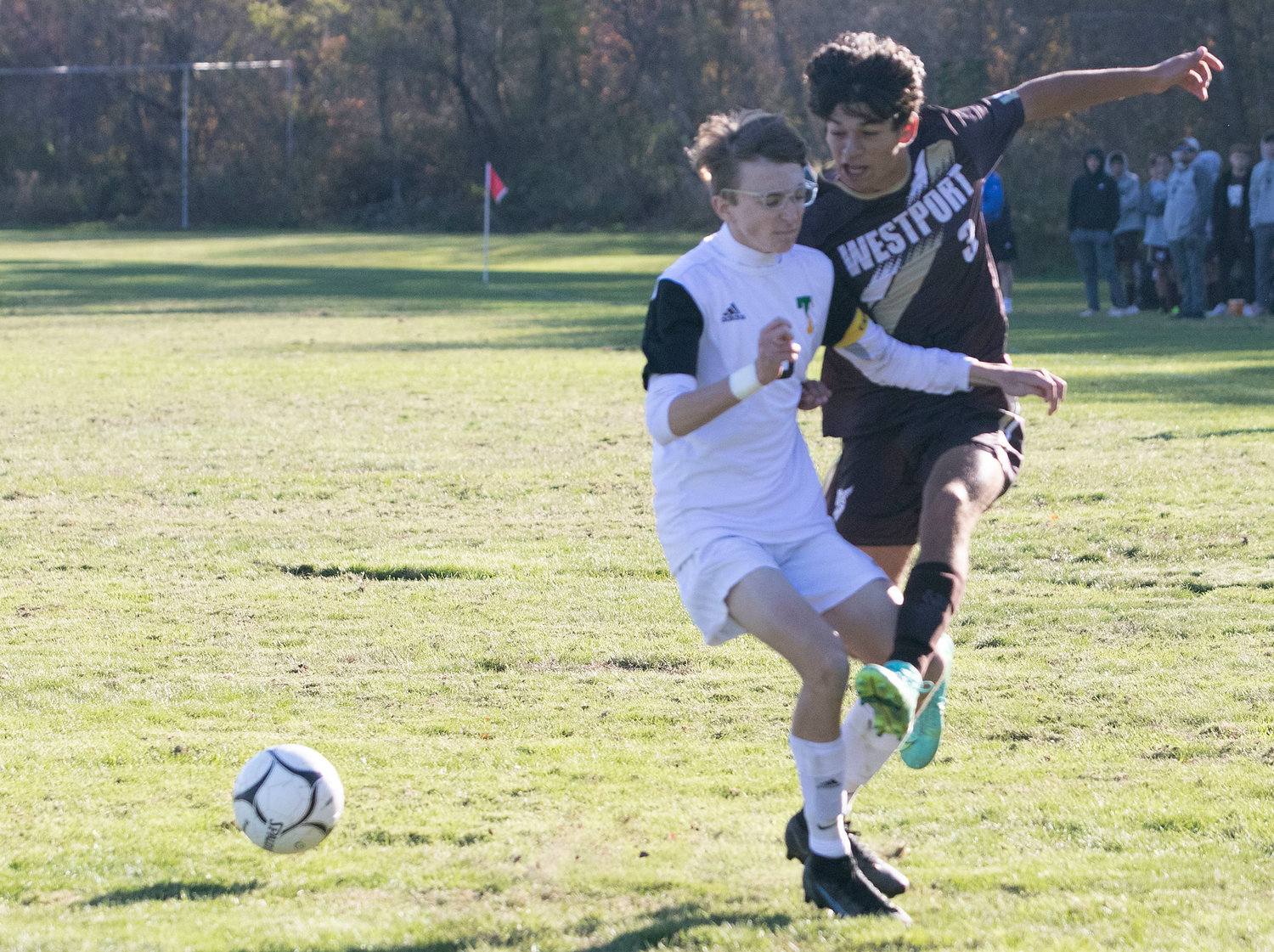 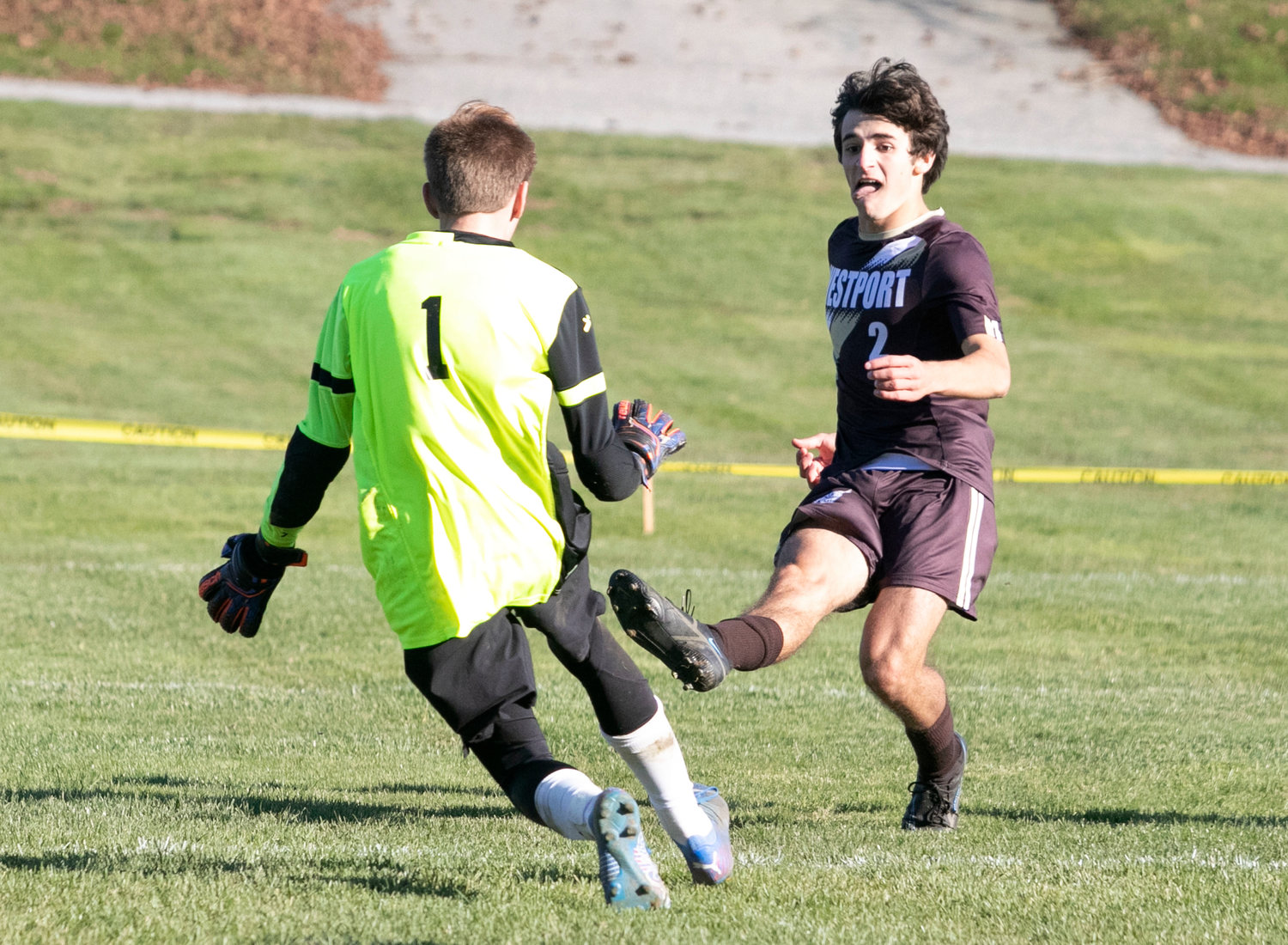 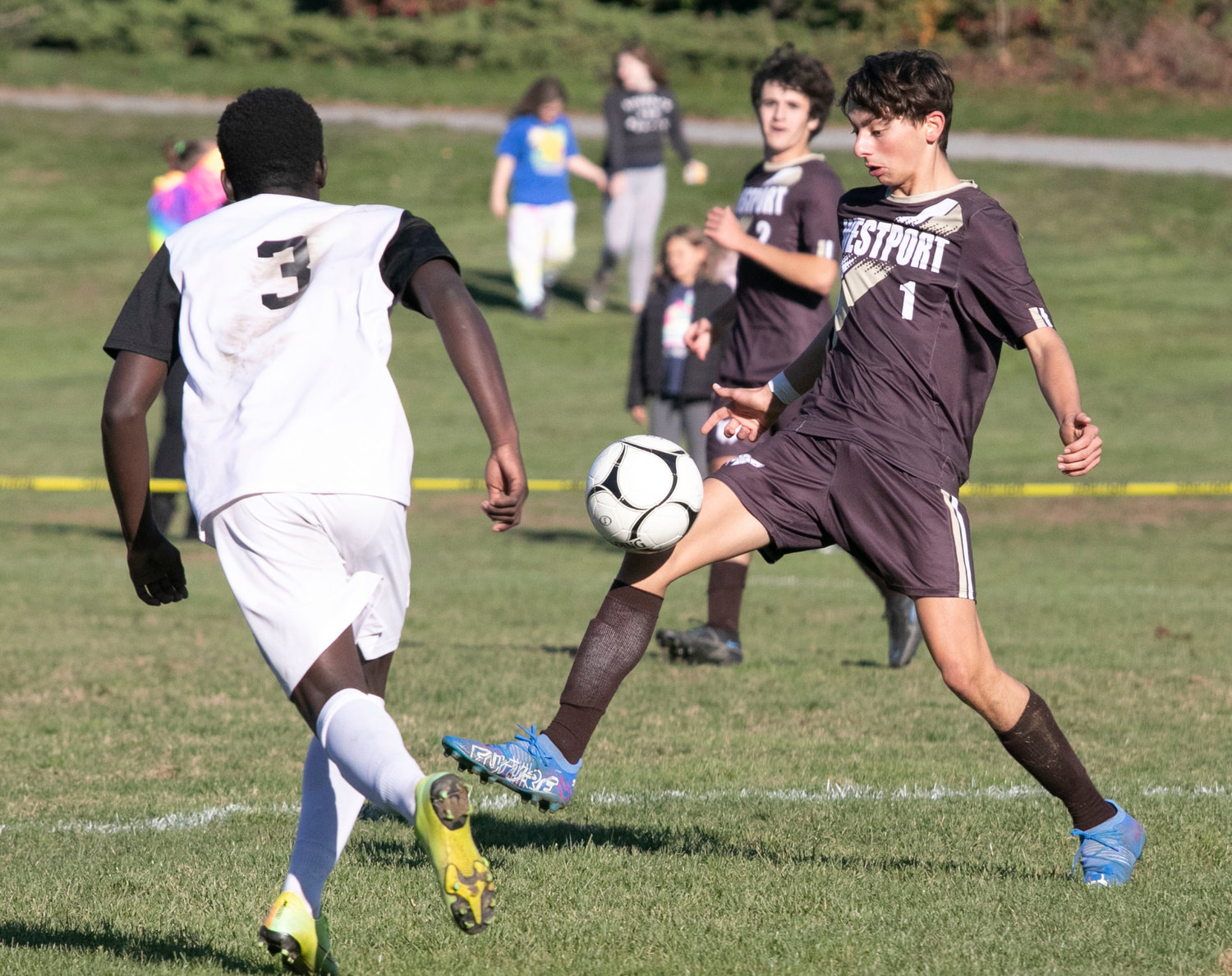 Midfielder Owen Couto collects a pass from a teammate at midfield. 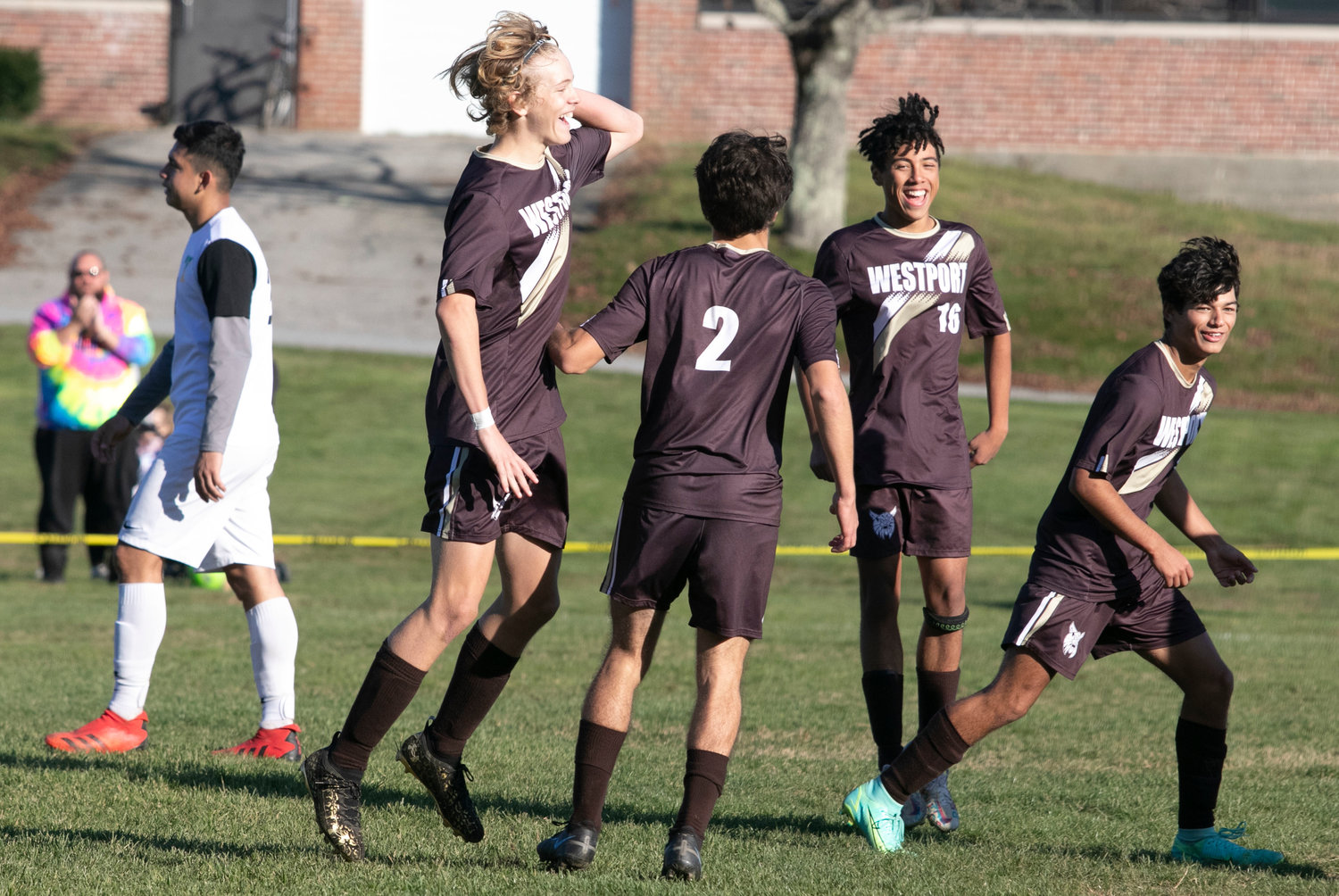 Taconic defender Reynaldo Casgro slew-foots midfielder Owen Couto sending the junior into the air. The Braves play became noxious as the Westport put the score out of reach in the second half.
Richard W. Dionne, Jr. 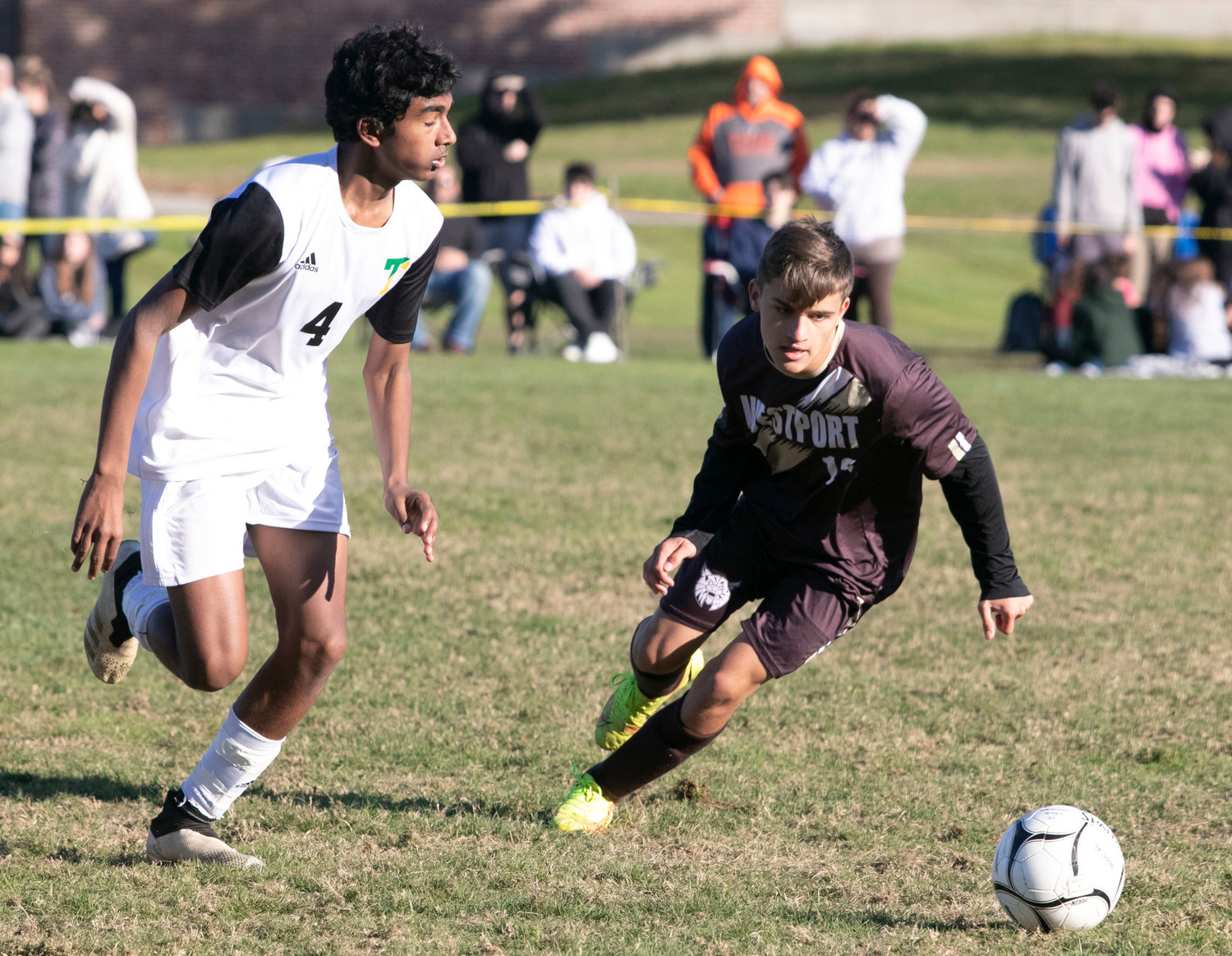 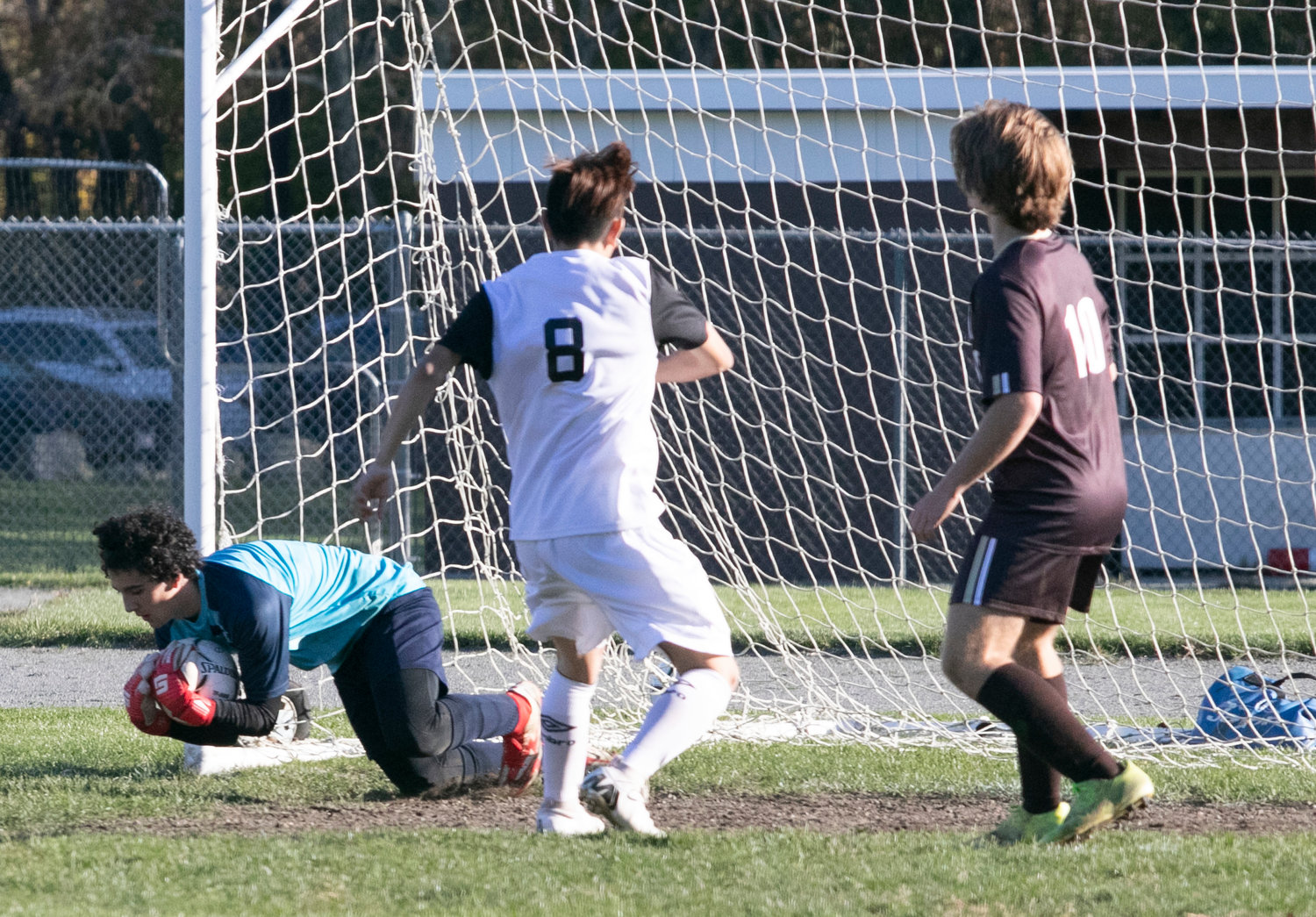 Goalkeeper Noah Amaral makes one of just four saves during the game as the Westport team defense stymied the Taconic attack. Coltrane McGonigle dribbles up the sideline with the ball. The junior scored the Wildcats first goal by heading a cross from Antonio Dutra Africano, into the goal for a Westport, 1-0 lead.
Richard W. Dionne, Jr. Coltrane McGonigle dribbles up the sideline with the ball. The junior scored the Wildcats first goal by heading a cross from Antonio Dutra Africano, into the goal for a Westport, 1-0 lead.
Photos by Richard W. Dionne, Jr. The Westport soccer team skunked Taconic High School, 4-0, in a physically marred contest marked by five yellow cards during a home playoff game on Saturday afternoon. Junior striker Hunter Brodeur scored three goals and junior midfielder Coltrane McGonigle also scored. “There was no talking in the locker room before the game,” Brodeur said. “We were focused and determined and I think that it really showed through out the game.”

The Wildcats defense skillfully stymied the Braves offense and brought about frustration and foul play that reared its head towards the end of the game. The Braves managed just 4 shots, all in the first half, on Wildcats freshman goalkeeper Noah Amaral.

“We played real well,” said senior center back and co-captain John Letendre. “We played great defense. I’m not even sure that they got off a clean shot.”

The Wildcats offensive press held the ball in the Braves half of the field for the first ten minutes of the game. “They couldn’t get the ball out,” said Wildcats head coach Chris Parker. “We knew that they would struggle under pressure and we went with our press right from the start.”

“Our team possesses good team speed,” said Coach Parker. “I thought that we would be able to utilize that. Get them on their heels, capitalize and score some goals.”

McGonigle put the Wildcats on the scoreboard

The Wildcats came in with a Coach Parker game plan called, “wide and glide.”

“We knew they would have a hard time with our team speed on the outside,” Coach Parker said. “If we played nice and wide, we would be able to run up and down the field on both sides and exploit their outside backs.”

The offense worked the plan to perfection. Junior midfielder Antonio Dutra Africano sped up the left sideline with the ball at his feet and chipped a cross to Coltrane McGonigle standing at the far goalpost. The tall athletic midfielder headed the ball into the right upper corner of the goal to give the Wildcats a, 1-0 lead, twelve minutes into the game.

“Antonio is brilliant at getting deep and was able to put in perfect service from the left side of the field,” said Coach Parker. “Coltrane in perfect position, took his time and and placed it well. He knew where the keeper was and placed it into the upper right hand corner.”

“The next few goals was Hunter working his magic,” Coach Parker said. “He’s a handful for any opposing back line. Their two center backs were pretty technical, but they were slight. We knew Hunter would be able to get penetration against those guys. Certainly one on one they would have a hard time handling him.”

Brodeur, the Wildcats leading scorer, went to work and did what he does best, score goals. The striker put three in the back of the net for a hat trick, giving him, 31 goals for the season. The first goal was scored when a teammate crossed the ball and Braves goalkeeper Tim Parsons came out to play it. Brodeur followed the ball all the way to the keeper and when Parsons bobbled the ball for a moment, Brodeur nimbly kicked the ball into the net for a Westport, 2-0 lead, twenty three minutes into the game.

“I always finish my run to the goalkeeper,” said Brodeur. I saw he bobbled it. It hung for a second in the air by his hands and I kicked it right into the back of the net.”

“Finish your run, became one of our discussion points before the game,” said Coach Parker. “We saw that their keeper was unsure of his hands when we watched Taconic play on tape.”

Brodeur struck again eight minutes into the second half. The lightning quick striker stole the ball off a defender at midfield, motored by the center backs and dribbled in alone on Parsons. The goalkeeper attempted to slide tackle Brodeur and he skillfully dribbled over him and tapped the ball into the open net to give Westport a, 3-0 lead.

Brodeur scored his third goal of the game with 25 minutes left to play. The striker again stripped a Brave defender of the ball just outside the 18-yard mark. He wheeled to his right and placed a kick, by an outstretched Parsons, into the goal to put the Wildcats up, 4-0.

“I poked it with my toe,” said Brodeur. “It hit the side post and went in.”

The Braves down four goals, showed their frustration with noxious play that brought about scuffling on both sides. Two yellow cards were given out in the first half and three more were given out in the second half. Pushing from behind, slew-footing and other egregious acts ensued as the game became more a melee with Westport players fighting not to get red carded and thrown out for the next round.

“We try and bring it, 100 percent every game,” said Letendre. “We play as tough as we can. If another team is going to try and go with us on that, we are not going to back down.”

“We’ve got good depth this year,” said Coach Parker. “We had to bring guys off the bench. Some guys played critical minutes, earlier than I would have wanted them too. I couldn’t play center midfielder Nick Arruda in the second half. I couldn’t take the chance of him getting a second yellow card.”

“It was chippy at times,” added Brodeur, “but I thought that we were able to weather the storm, stay composed and win the game.”

Coach Chris Parker moved the tall, burly Letendre to center back due to injuries at that position.

It’s been fun playing with Dom (Vitorino),” Letendre said. “It’s more of a leader position. You’re in the center and you can kind of control everything. I like that.”

Coach Parker had the chance to watch Taconic play before their game. “I knew that they were going to be scrappy. They don’t have any quit in them. They went down 2-0 in their last game and won 5-4, so we knew they would give us a handful.”

Next up: The 7th seeded Wildcats host 10th seeded KIPP Academy in the round of 16, on Tuesday at 2 p.m.