More than 800 students poured into Westport's brand new flagship middle and high school Tuesday morning, nearly two years after groundbreaking began on the $97 million project and a decade after high … 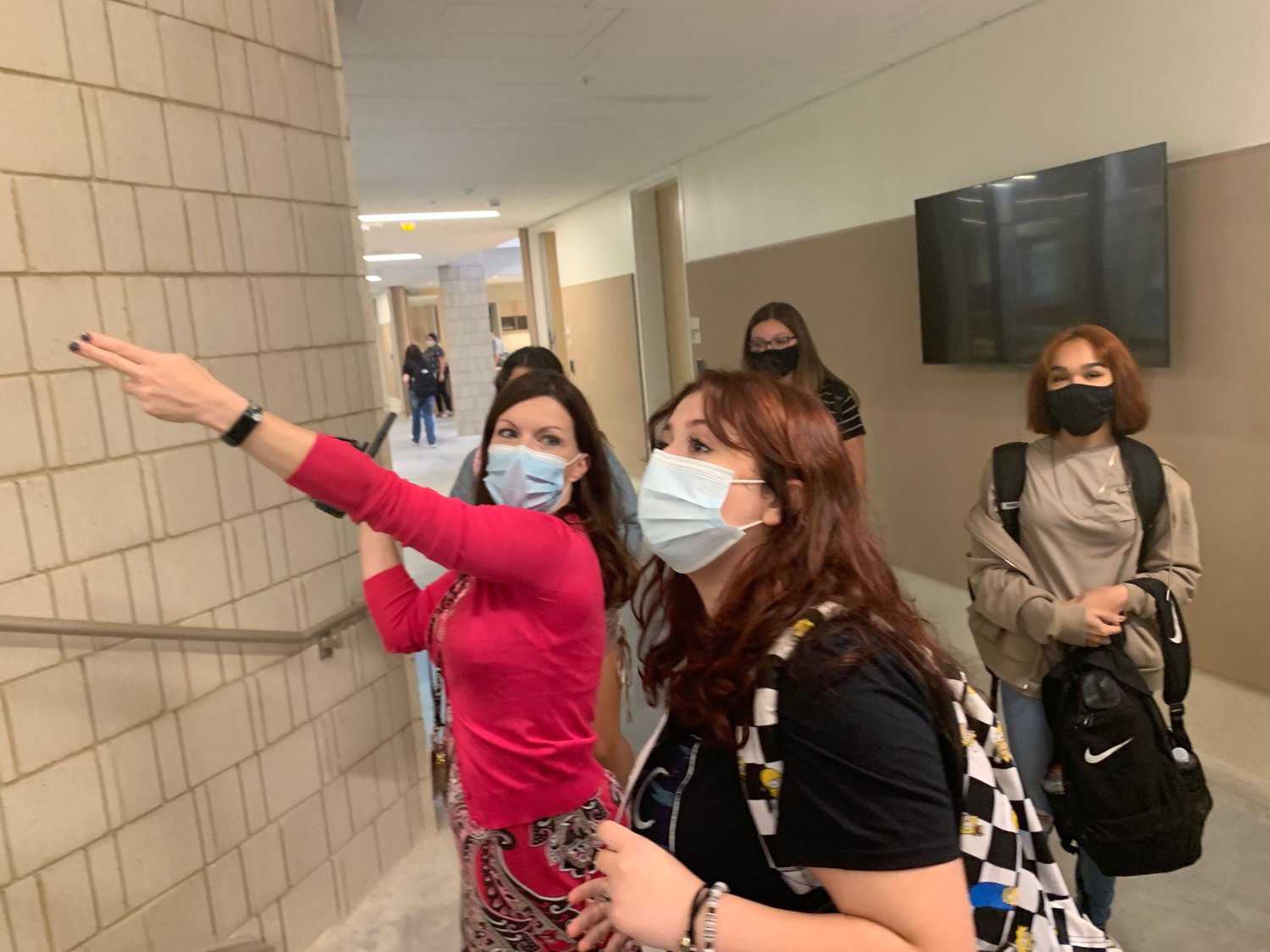 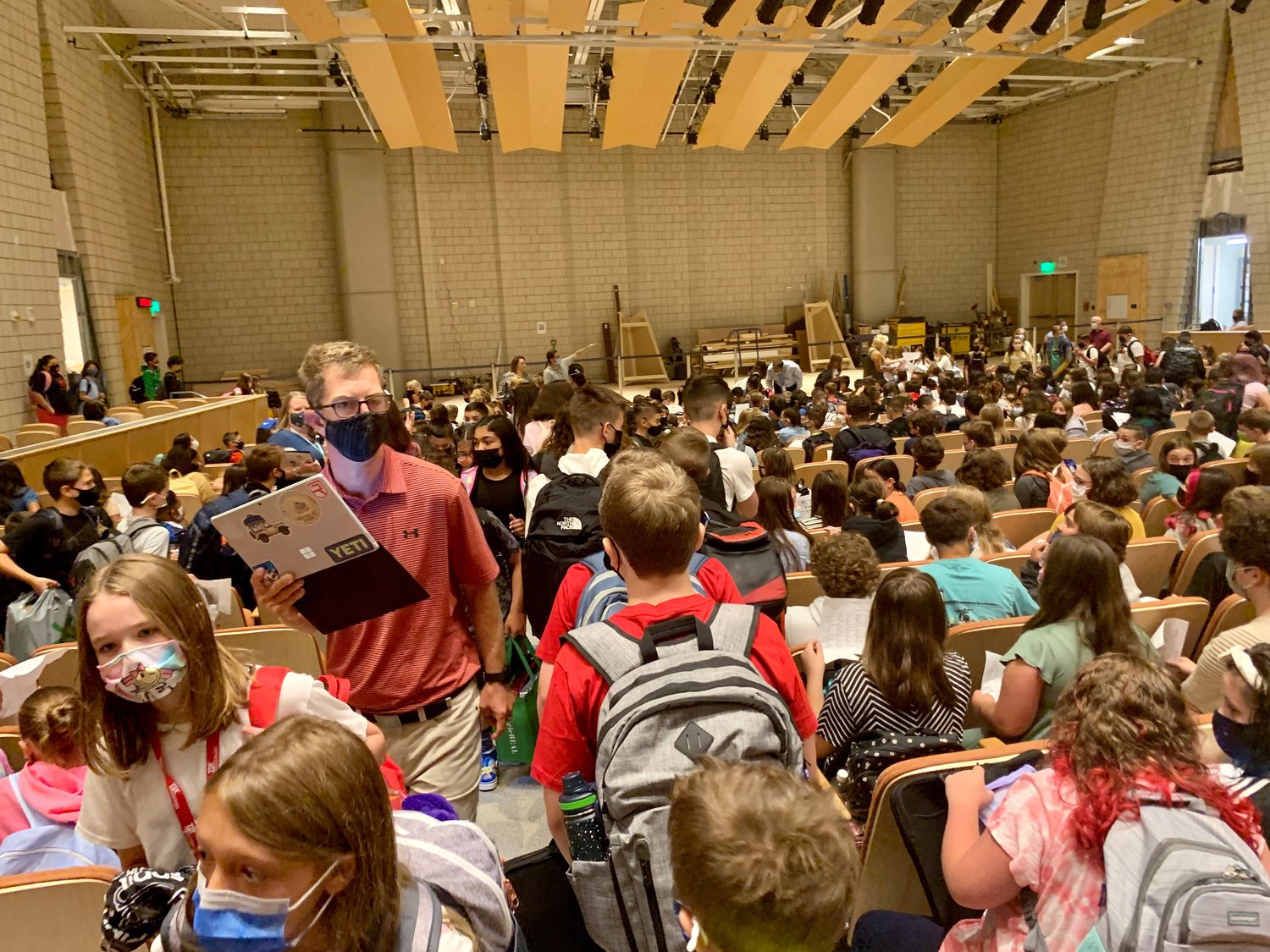 Students get ready for their first day of school at Westport's new middle high school. Math teacher Andrew Cottrill is at center left, with a laptop.
RICHARD W. DIONNE JR. 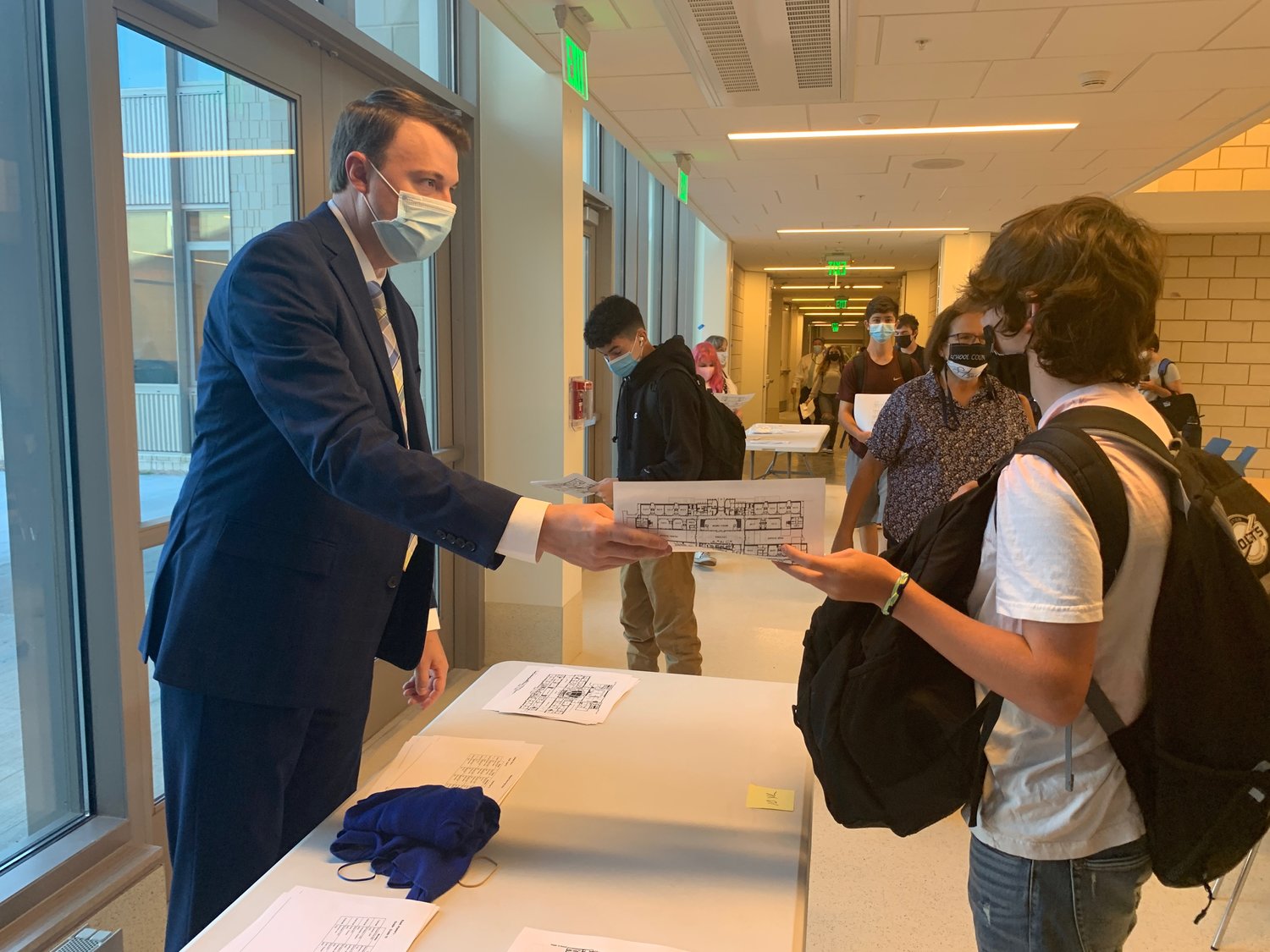 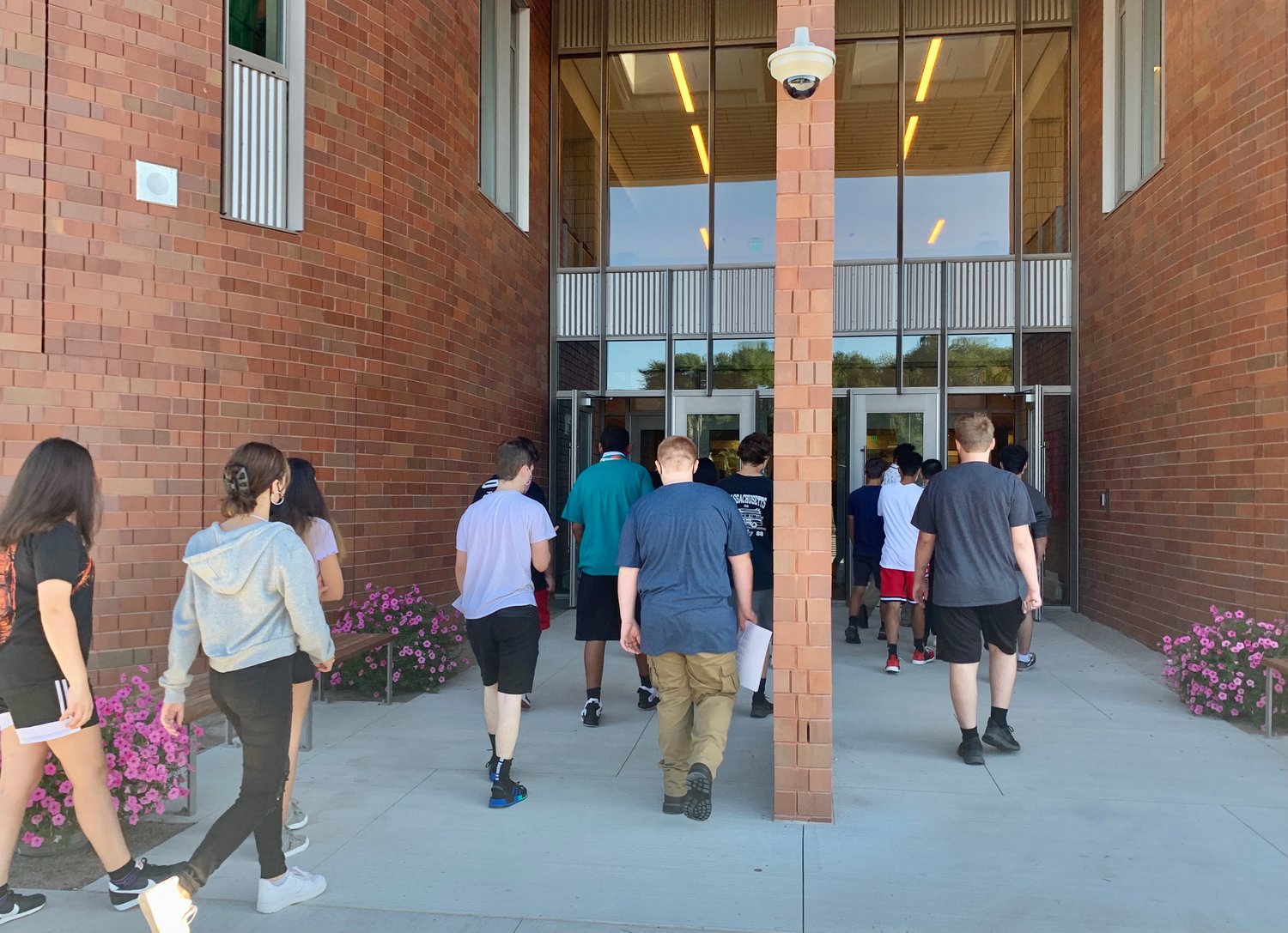 Students file in to Westport's new middle high school, a $97 million complex that has been years in the making.
RICHARD W. DIONNE JR. 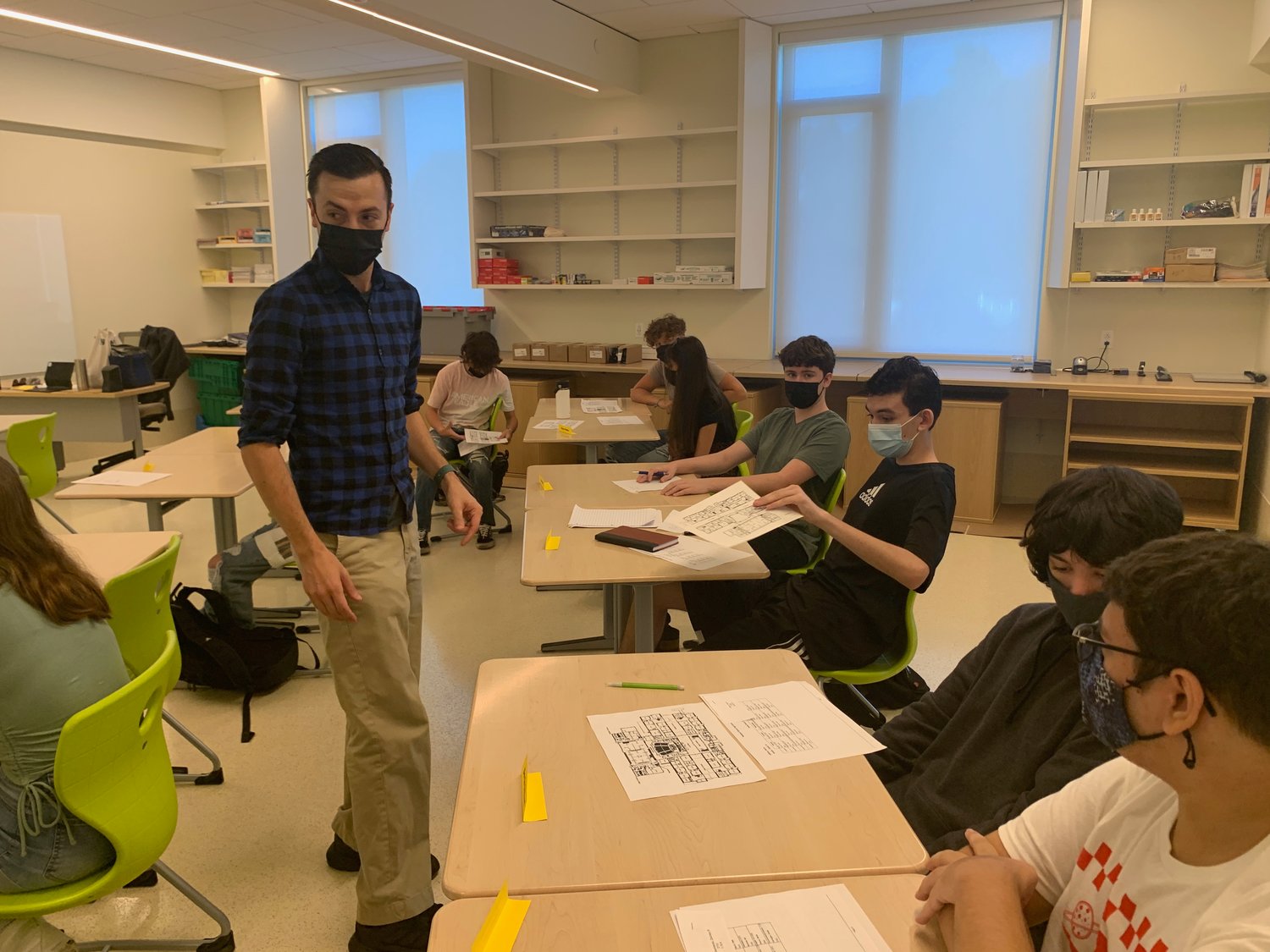 More than 800 students poured into Westport's brand new flagship middle and high school Tuesday morning, nearly two years after groundbreaking began on the $97 million project and a decade after high levels of PCB contamination and asbestos at the old middle school were first found.

The rooms were tidied, much of the detail work was finished as students filed in, and there was little more than the usual pandemonium that occurs on an average first day.

"It's been a long time coming," Supt. Thomas Aubin said.

The new school, which will house students from the fifth through 12th grades, has been under construction since late September 2019. But while the massive complex took under two years to build, the road toward its completion has been a decade in the making.

PCBs were found in the old, now demolished middle school in 2011, and several years of study led to the school department's decision to close the school in 2014. Officials determined that remediating the aging building would cost more money than it was worth — between $50 million and as much as $65 million. So the school was closed and demolished four years later, and seventh and eighth graders were sent to the old high school while a new school was researched, funded and built.

Tuesday's grand opening could not have come without a herculean effort from many people, Mr. Aubin said a few days prior to the opening. It has been a busy two years capped off by an extremely busy summer, as dozens of details, small and large, needed to be worked out before the school department could be granted a certificate of substantial completion and allowed to use the building.

"I give great credit to the Westport Fire Department," Mr. Aubin said. Lt. Mark Brisk and the chief (Brian Legendre) for their diligence and getting in there. I also want to thank Police Chief (Keith) Pelletier. Both groups have spent an inordinate amount of time in the building," looking for health and safety issues and making sure all was configured properly. "Shout-outs" also go out to Ralph Sousa and Jim Hartnett, he said.

"They have spent a lot of time here and understood the importance of getting the building ready."

Tuesday's opening didn't signal that everything is done inside the school. Mr. Aubin said there are still multiple items that need to be addressed, but they're all relatively minor: finish work, fixing some tile work, a few floor issues and the like. But he believes all should be addressed by November, when the 90-day temporary certificate of occupancy expires.

"I'm expecting construction to continue into November," he said. It's like a house. Until you get in there, you don't really have an understanding of what is going on and what little things need to be done."

Mr. Aubin said he is still confident that the school department will be able to host an open house for the community this fall.

"Ultimately, when taxpayers are putting up that kind of money, you want it to be perfect," he said. "We really want to get this punch list stuff done. We have every intention of having the community participate in the schools."

Mr. Aubin also said he was "thrilled" when he looked at the enrollment numbers for the fall this year, which show approximately 515 middle schoolers and 317 high schoolers.

"We're pretty excited because we're seeing a real increase in students who are either coming back to the district or returning from home schooling," he said. "Enrollment is a challenge throughout the state and the country. If we want to (increase enrollment), we want to provide our students with the type of robust programming they deserve."

The new school has that, he said, and will also be a hub for the community, offering night classes and many more initiatives that benefit all of Westport, not just the students.