Town will look for funds to do minor re-paving and striping, but won't mark parking spots

The town is taking steps to address the emergency vehicle access and parking issues at Westport Point, and for now there is no plan to re-pave the parking area adjacent to the Main Road terminus, …

Town will look for funds to do minor re-paving and striping, but won't mark parking spots 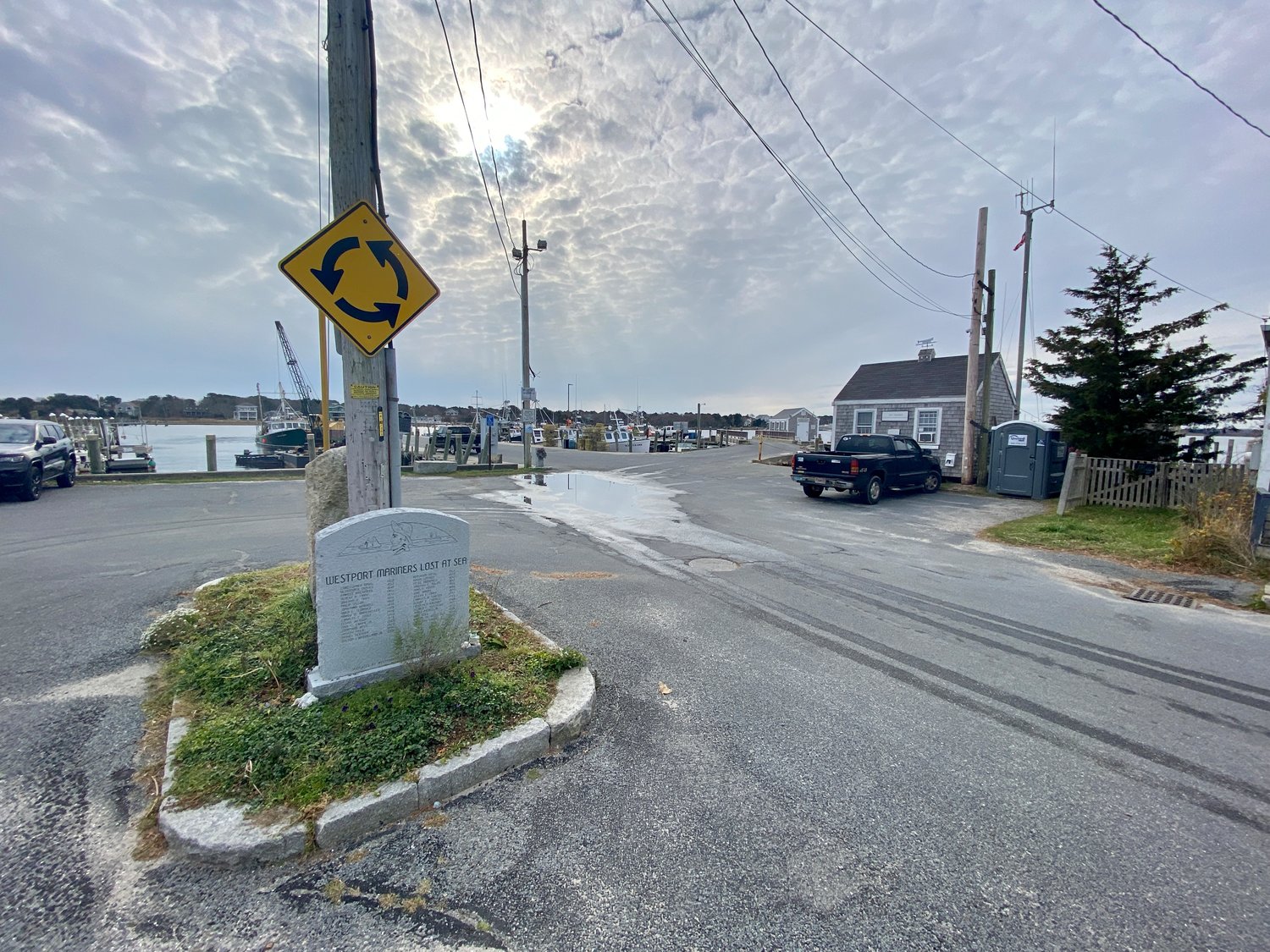 The cul de sac at the end of Main Road at Westport Point will see limited work, providing the funds can be found.
TED HAYES 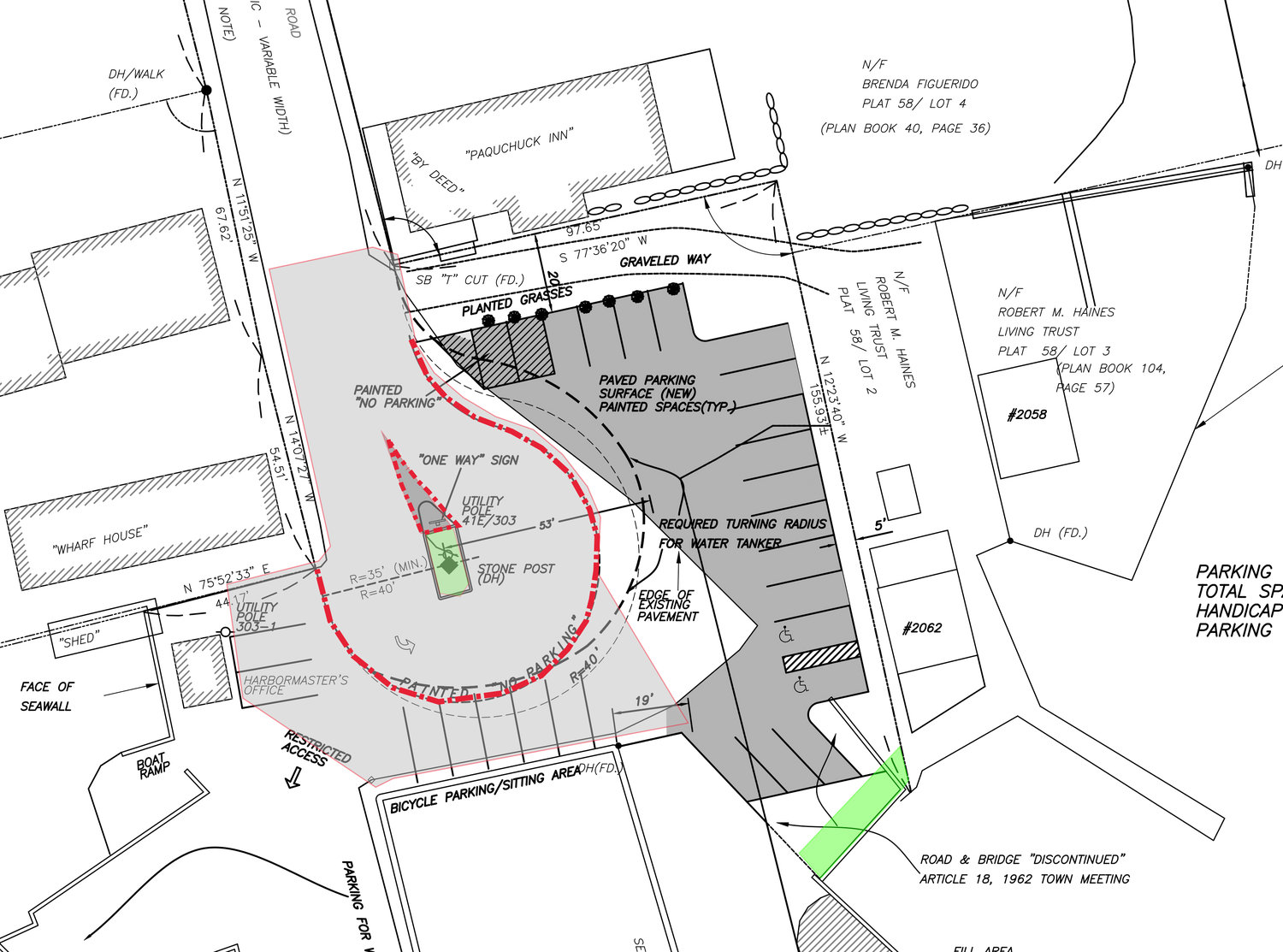 This diagram presented to the Select Board last week shows how the turnaround radius at Westport Point will be marked (in red), providing funds are found. Note that the graphic includes work that will not be done at this time — namely, parking and striping nearly two dozen parking spots to the east of Main Road's terminus.
TOWN OF WESTPORT
Previous Next
Posted Wednesday, December 1, 2021 8:59 am

The town is taking steps to address the emergency vehicle access and parking issues at Westport Point, and for now there is no plan to re-pave the parking area adjacent to the Main Road terminus, turnaround and Westport Landing, or delineate all parking in the area.

Town administrator Jim Hartnett told Select Board members last Monday that he will work with the highway department to find funds for a limited scope of work, following discussions with business owners, residents, emergency services representatives and others by a town commission called to study the issue.

He said there is general agreement "that emergency access is the priority."

The preferred way of providing that access would be to delineate the turning radius around the cul de sac by striping the area, "maybe extending the center island either by painting or by planting ... to encourage people to go counterclockwise around that island." He also noted that limited re-paving would likely include not just the turnaround but also, the six parking spots at the end of the road.

He said the town will likely need to re-pave a section of the cul de sac to do so. But repaving the whole area, which was one option preferred by some, isn't part of the current plan.

A complete re-pave "is going to change the character of that area significantly. It's something we could do in the future (but) the preferred way is to do the safety issues first."

Also off the books for now is a proposal to delineate and stripe all parking spots in the area. Hartnett said doing that would eliminate spaces, as now, without striping, more cars can fit in the area than would if each were delineated.

"I would suggest that we do the turnaround first, see how it goes for a year or two, and then take another look at the rest of it."

A day after the select board meeting, members of the Landing Commission said they may move forward with their own plans to delineate parking at the landing, by using headstones, or stop stones, at the head of each parking spot.

"We are actively thinking about marking the parking spaces" at the landing, Bull said.

"More and more, we've had problems with encroachment because we haven't defined where our land is. I think we should go ahead with that; I think it would be wise to effectively define where the landing is by putting in headstones at parking spots."