Banners have been stolen seven times since August, from in front of Main Road meeting house 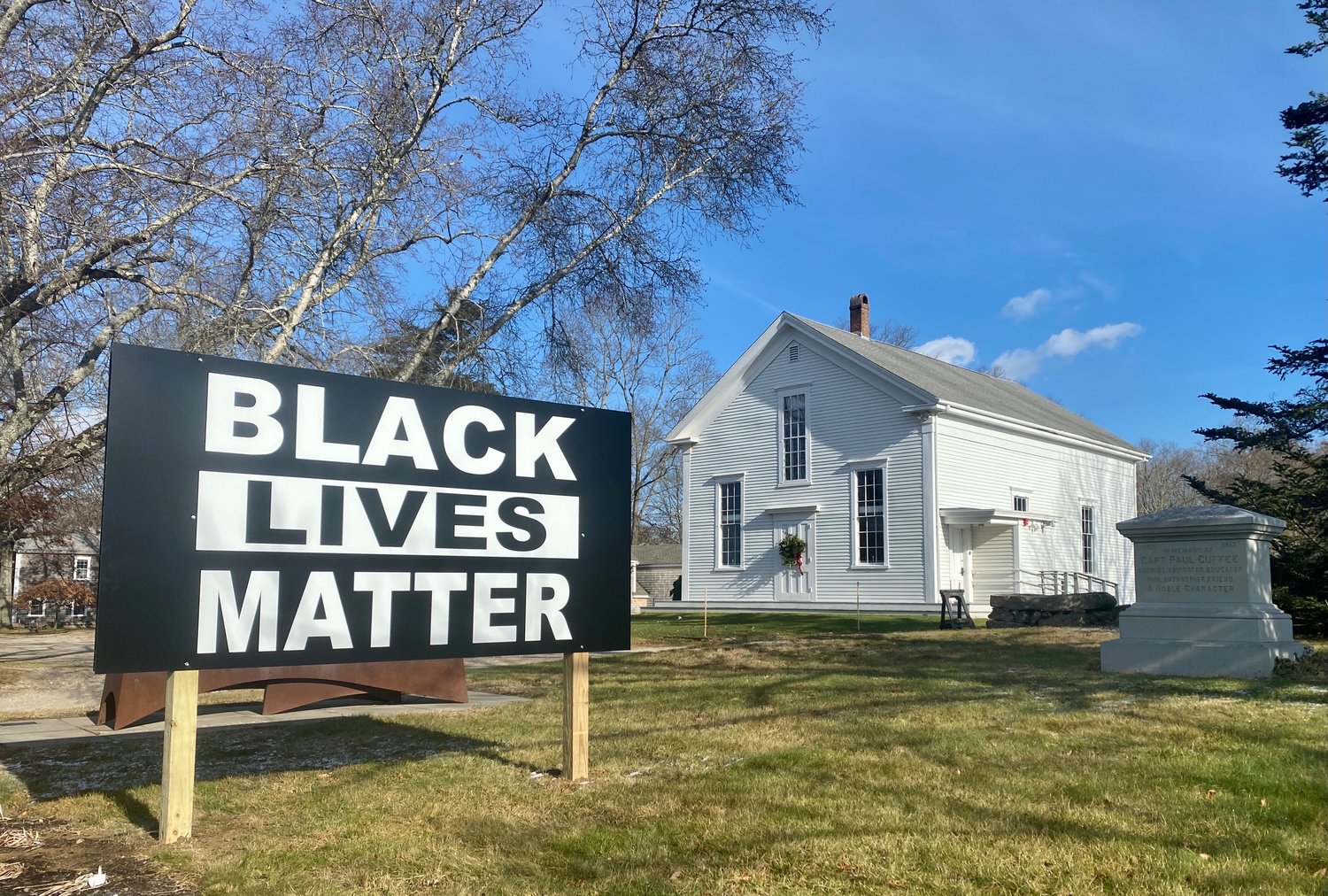 The Westport Monthly Meeting of Friends is calling for a community-wide discussion on racism and tolerance, after a months-long rash of theft from its 938 Main Road meeting house.

Since August, seven Black Lives Matters banners that had been hung between two trees on the property have been stolen, several less than two days after being raised. Last month, the Friends decided to stop hanging any more of them, replacing them instead with a large permanent wooden sign. So far, it has not been touched.

The Society of Friends started flying the Black Lives Matter banner last summer, and the first one hung for about a year before it was stolen this August. Since then, all six that replaced that first one have also been stolen in short order.

In a statement prepared after a meeting last Monday, (see bottom of story) Friends said the original goal of hanging the banners "was to be a public ally with the Black Lives Matter Movement."

"Westport Monthly Meeting "is spiritually committed to BLM and witnessing against other forms of prejudice, in the belief that hate is here in Westport and other communities nearby."

Apart from the theft of banners, the Friends have also received received hateful messages left in voicemails and on paper, said Susan Czernicka,  the Friends' outreach clerk. She also said there has been disturbing misinformation about the Friends, and the Black Lives Matter movement, online; specifically, the 'We the People' Facebook page based in Westport.

"I'm saddened that there's so much disinformation and hate in our community," Czernicka said.

Friends reached out to the Westport Police Department earlier this month, and at last Monday's meeting discussed whether they should install security cameras on the property.

While they haven't yet decided whether to do so, they said they hope to use the incidents to increase awareness of social justice issues in Westport, Dartmouth and other South Coast areas. In recent weeks they have reached out to nearly two dozen temples and houses of worship across the area, hoping to organize a community-wide discussion of the issue and how to help Westport grow into a more inclusive, accepting place. They are also planning a vigil for Sunday, Jan. 23, at the Westport Monthly Meeting house. It is planned for 4 p.m.

As for having a broader community discussion, Czernicka said she welcomes that and wants to hear from members of the public.

"We would love it if that happens," she said. "It's a discussion that needs to happen."

On Monday, Dec. 13, the Friends released the following statement:

Westport Monthly Meeting is spiritually committed to Black Lives Matter and witnessing against other forms of prejudice, in the belief that hate is here in Westport and other communities nearby. There is a desire to broaden this concern and witness to include other faith communities in the area, other organizations, and the media.

We sent Friends to meet with the Westport police department so that they are aware of the hatred that is being expressed in the community. We have reached out to other faith groups in the South Coast, inviting them to join us in a collective response.

We are also reaching out to the community and ask how they — how all of us — want to be in relationship with each other. The generosity shown across the street with the food pantry is true and alive. We believe that heart transformation can happen by sharing our story and engaging the community in interrupting oppression and naming that hate does not belong here.

In response to the acts of the past months, we will be holding a Hate Has No Place in Westport Vigil on Sunday, Jan. 23, 2022 at 4pm at Westport Monthly Meeting, 938 Main Road.