Third generation dairy farmers focus on local as they look toward the future, opening pasteurization facility and retail store

Andrew Ferry walks out of a barn on Gifford Road and glances up past the pasture toward the white cape where he was raised. There are scorch marks on the barn's foundation from the family's …

Third generation dairy farmers focus on local as they look toward the future, opening pasteurization facility and retail store 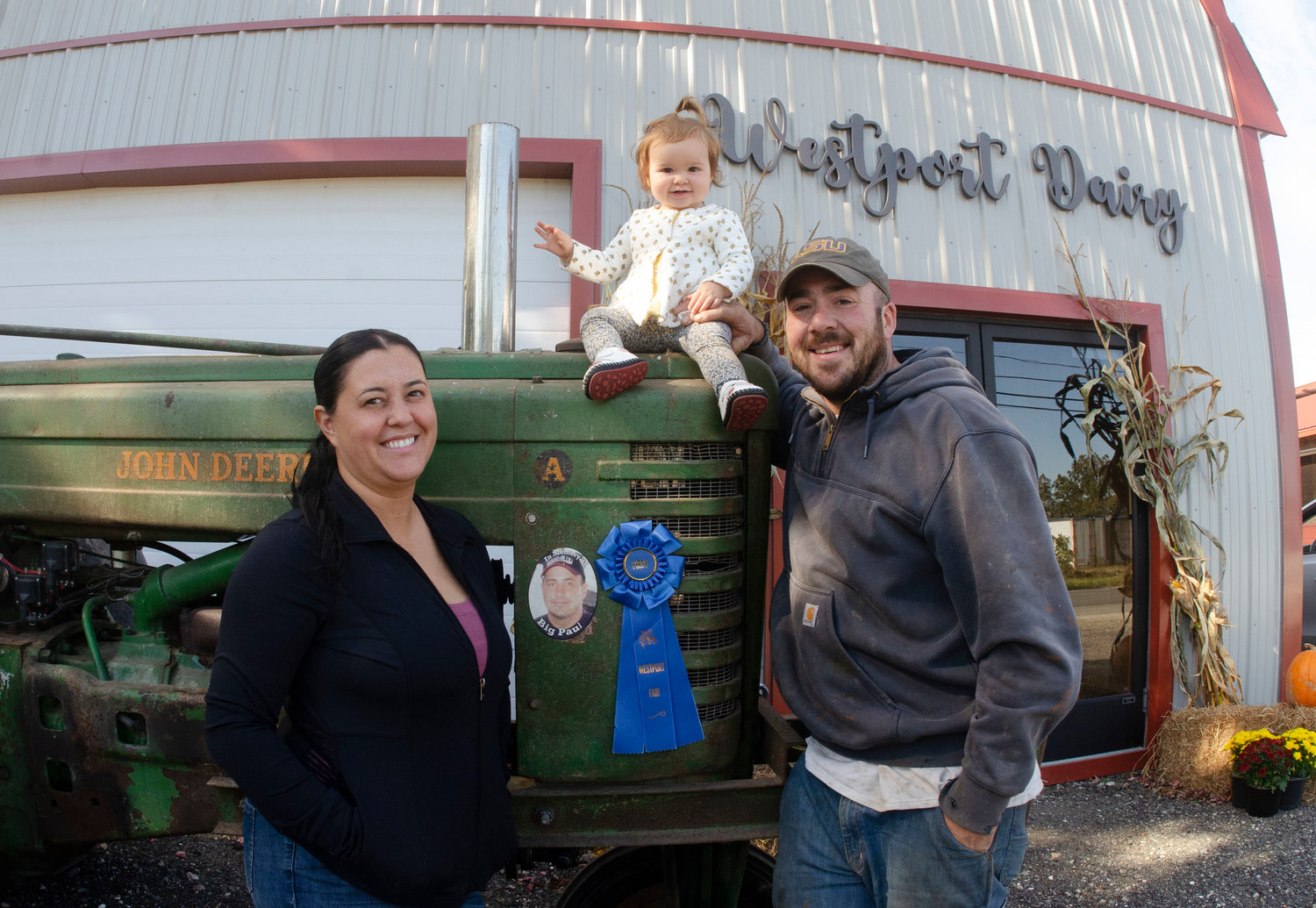 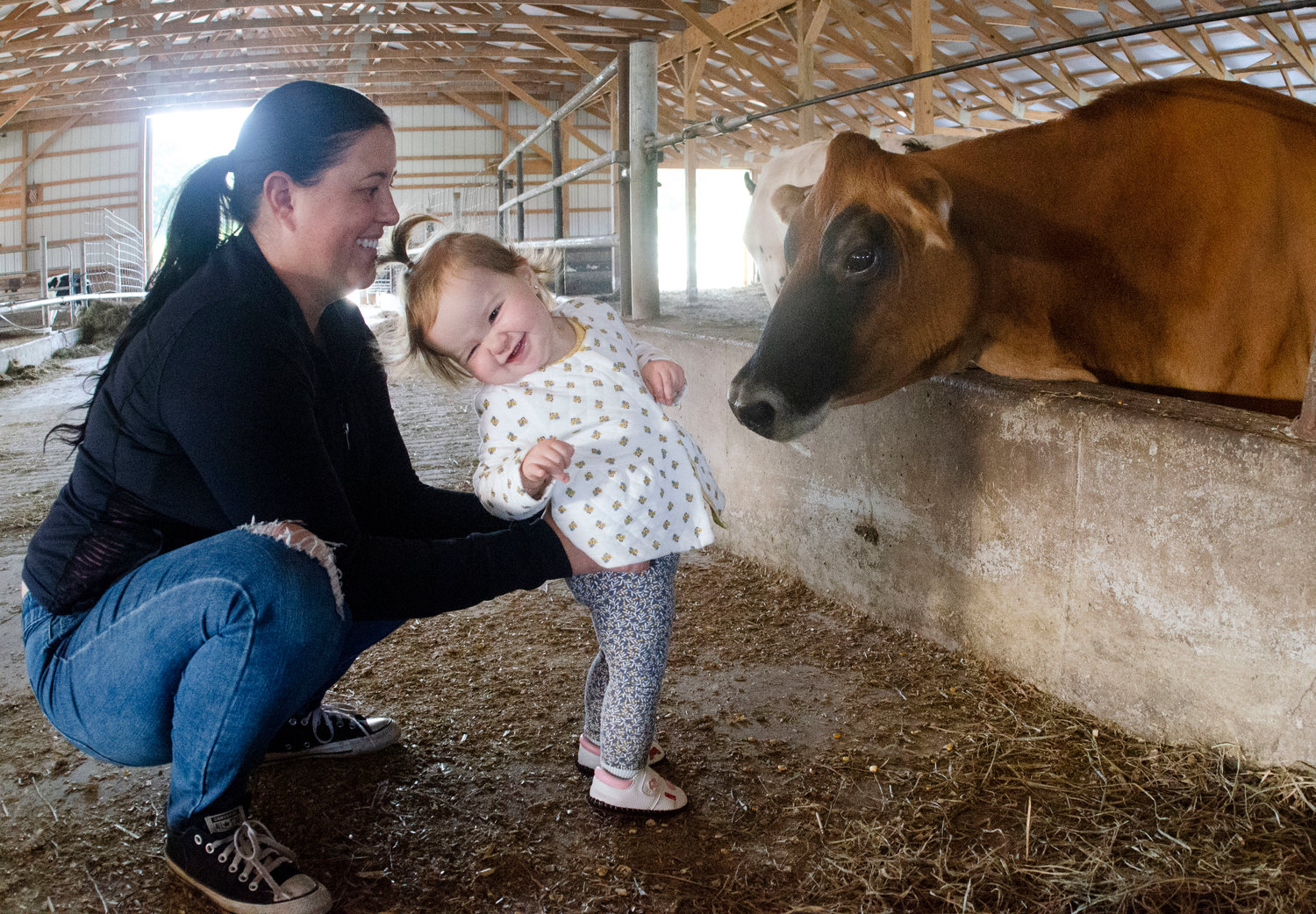 Shauna Ferry and daughter Maia say hello to a friend. Their herd of about 120 cows are all individually named.
RICHARD W. DIONNE JR. 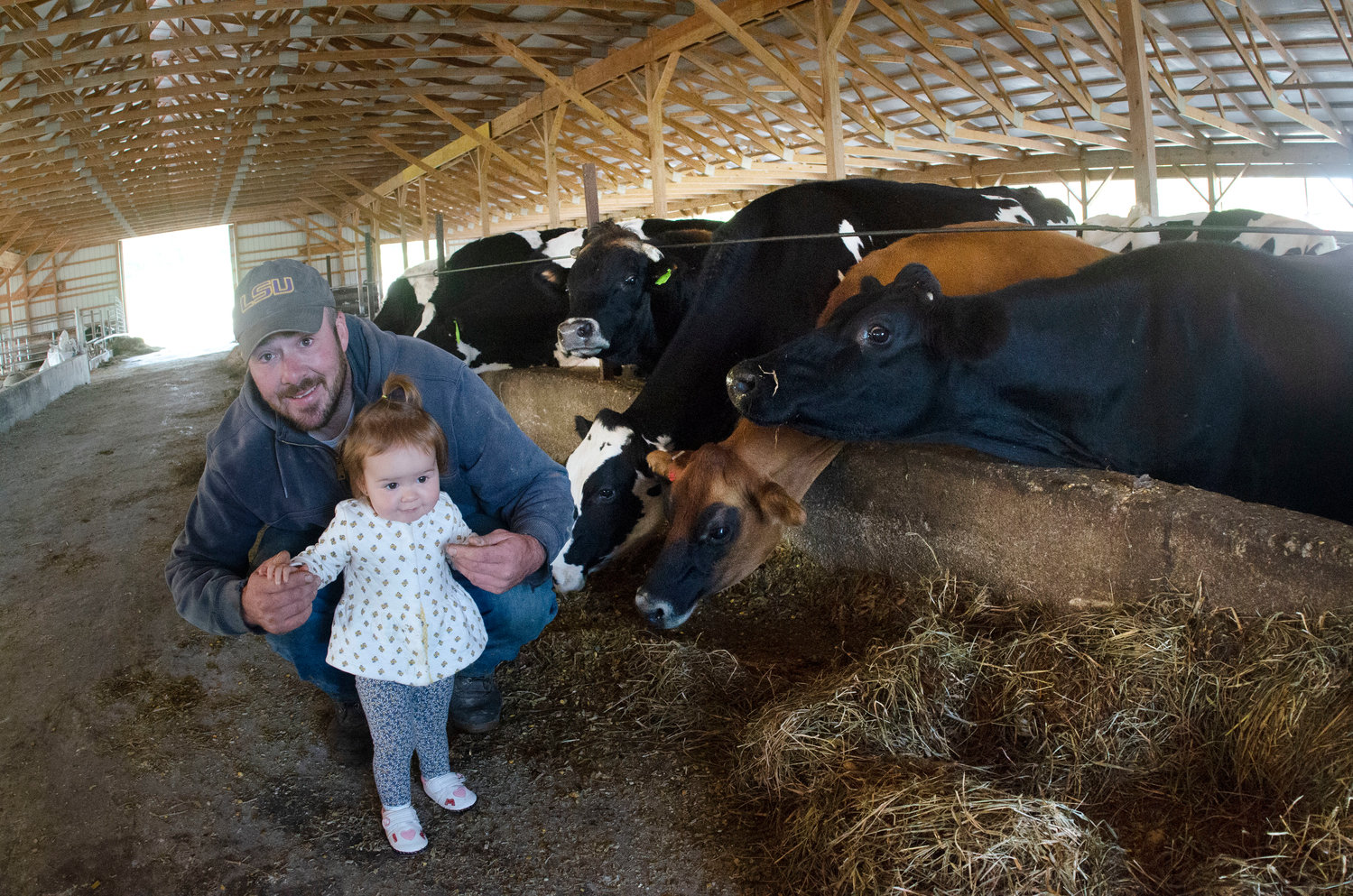 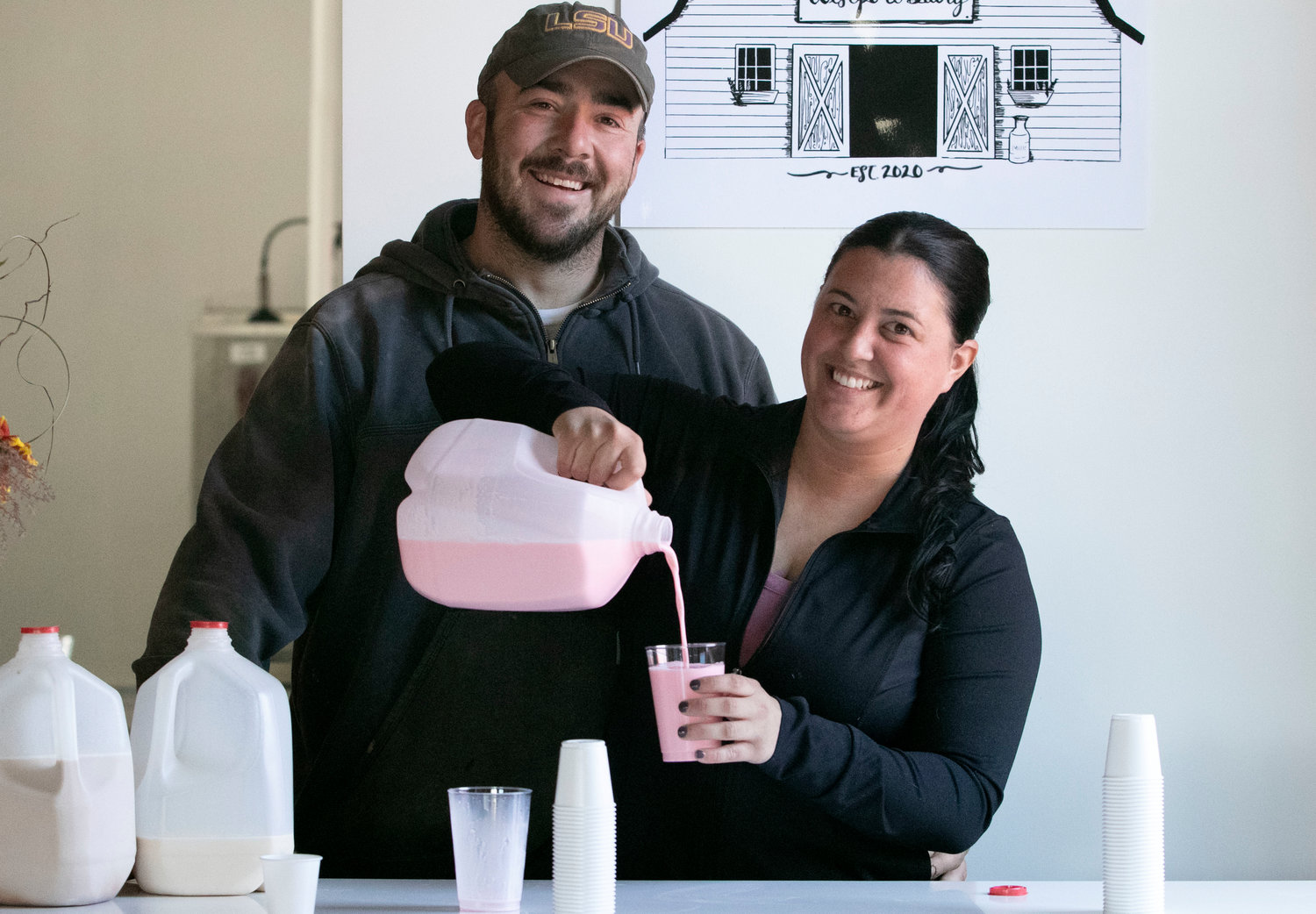 Everything I know, I learned right here. This is all I ever wanted to do.”
Andrew Ferry

There's not a lot of dairies left of their size that are producing locally pasteurized products. They care about their community and want to feed their community in a conservation-focused way.”
Ross Moran, executive director of the Westport Land Conservation Trust

We want to try to make all the hard work worth it — there's so many people right in this area that need local products, and they can't get it”
Shauna Ferry

With the milk industry the way it is, what they are doing there is a credit. They're doing what no one else is.”
Ray Raposa, chairman of the Westport Agricultural Commission
By Ted Hayes

Andrew Ferry walks out of a barn on Gifford Road and glances up past the pasture toward the white cape where he was raised. There are scorch marks on the barn's foundation from the family's devastating 2016 fire, and new lines of sight that were never there when he was a kid. But he sees progress.

"Everything I know, I learned right here," he said, looking up and then back across the property. "This is all I ever wanted to do."

After years of work, that goal might be soon be easier.

A third generation farming family, the Ferrys have been in the dairy business for more than 70 years. Andrew's grandfather Manuel Ferry Sr. founded the farm, and his father Mike and mother Deborah continue to oversee the main operation on Gifford. And though the work is always hard and the hours never-ending, the Ferrys have had to contend with more than most. Heavy snow collapsed two barn roofs in 2014 and though they were rebuilt, a massive fire in June 2016 wiped out a significant portion of the farm.

But Andrew and his wife and business partner Shauna see better days ahead. They've spent the last five years slowly rebuilding and expanding, and some time next month plan to open Westport Dairy, a pasteurization facility and retail store, in a converted garage that survived the 2016 fire.

Once open, the Ferrys will be the only dairy in Westport pasteurizing their product. They will sell milk and value-added products like flavored milk and drinkable yogurt at Gifford and at local retailers, and hope to move their raw milk retail, currently at their Pine Hill Road farm,  there. All that's needed is to transfer the licenses, Shauna said, and they are working on that.

"Since (the fire) it's been a journey," said Shauna, who with Andrew welcomed their first child, Maia, in August 2020. "We've been trying to get this off the ground for a long time, so getting here is really exciting."

The roof collapses and fire forced the Ferrys to take a close look at their operation and see how they could insulate themselves from many of the issues small dairies like theirs now face. But even before the twin disasters, they were planning ahead for a changing local economy.

Andrew established their raw milk operation in 2013 out of Pine Hill, becoming the town's only producer and retailer of certified raw milk and gaining a loyal following of fans who buy it on the honor system from an unstaffed stand.

Their long term plans were aided greatly earlier this year, when they purchased 80 protected acres of the former Santos farm on Main Road from the Westport Land Conservation Trust. Recognizing the importance of the property and its iconic buildings and acres, the trust had raised $5.1 million to purchase it and additional acreage from its former owners, with help from the town and a long list of donors. Following a selection process launched to find an occupant, the trust selected the Ferrys earlier this year.

"We had six really excellent candidates," Ross Moran, the trust's executive director, said Friday. "But Andrew, Shauna, Mike and Deborah, and their family history being generations of farmers in town, as well as their experience with conserved land, were really important. They're familiar with the type of conservation values we were seeking to protect on Main Road. And they have a good plan and the experience to do it."

Just as importantly, he said, the Ferrys are committed to Westport and share the values that many here hold dear:

"To have a local product like that is really unique," Moran said. "There's not a lot of dairies left of their size that are producing locally pasteurized products. They care about their community and want to feed their community in a conservation-focused way. So I think their selection had to do with all of those things."

Andrew, Shauna and Maia now live at the Main Road farm — Mike and Deborah live at Gifford — and keep much of their herd there.

Even as they worked on the Santos farm proposal and eventually won, the Ferrys were knee-deep in rebuilding the Gifford location, the site of the 2016 fire. So far, they have rebuilt one of several buildings burned in the fire, and plan to build a new barn to replace one built by Andrew's grandfather in the 1940s. They'll put a milking parlor in there next year, replacing one lost in the fire, and it will be plumbed directly into the pasteurization facility, cutting out a significant amount of work.

"Andrew's the whole heart and soul behind all this," Shauna said. "He knew where the dairy industry was headed a long time ago. He knew it was going to continue to be a poor outcome for what you were putting into it. He always wanted to do value-added products, so he started with raw milk. Then he said, 'Let's pasteurize our own.' We didn't realize how much of an intricate process it would be — but once you dive in, you're diving in deep, deep."

Finally, the pasteurization plant went online this Spring and they have a carefully laid-out plan to continue to improve the property.

Apart from their belief that expansion and innovation will sustain them in the coming years, the Ferrys are excited to open the new Westport Dairy from a social point of view — though long-established here, having a retail outlet will help bind them even closer with their community, Shauna said.

"We don't get to meet our customers," she said. "So having the store and (the raw milk operation) here would be really cool. And we want to try to make all the hard work worth it — there's so many people right in this area that need local products, and they can't get it."

There is much local excitement about the Ferrys' expanding operation. Last Saturday, Rep. Paul Schmid organized a tour of several agricultural sites in Westport, starting at Hay Ray's, Agricultural Commission chairman Ray Raposa's farm and feed store, then stopping at the Gifford Road location before heading over to the Westport Fair. During their visit to the Gifford dairy, guests got a chance to try some of the Ferrys' pasteurized products, including strawberry milk, banana cream milk, drinkable yogurt and other varieties.

Raposa said the Ferrys' accomplishments and drive are impressive, given what they've had to overcome internally and externally over the past few years.

"If anyone has fortitude," it's Andrew and Shauna, he said. "With the milk industry the way it is, what they are doing there is a credit. They're doing what no one else is."

While that's by design, Andrew said the family's ventures are also helping to ensure that the dairy will thrive into the future, and that it will be an integral part of Westport's community. He loves his life of work, getting up long before the sun rises every morning. He loves taking care of his cows — he and Shauna name every last one of them individually — and the couple, together since high school, are excited about the future.

Very early one morning last week, Andrew was taken aback as he drove a tractor out on Gifford at the start of his morning chores. Though the sun was long from rising, an impossibly bright moon rose over the trees, casting rich light over everything he could see. He had to stop for a minute to take it all in.