The Warren Holiday Festival returns this Friday and Saturday to the downtown. 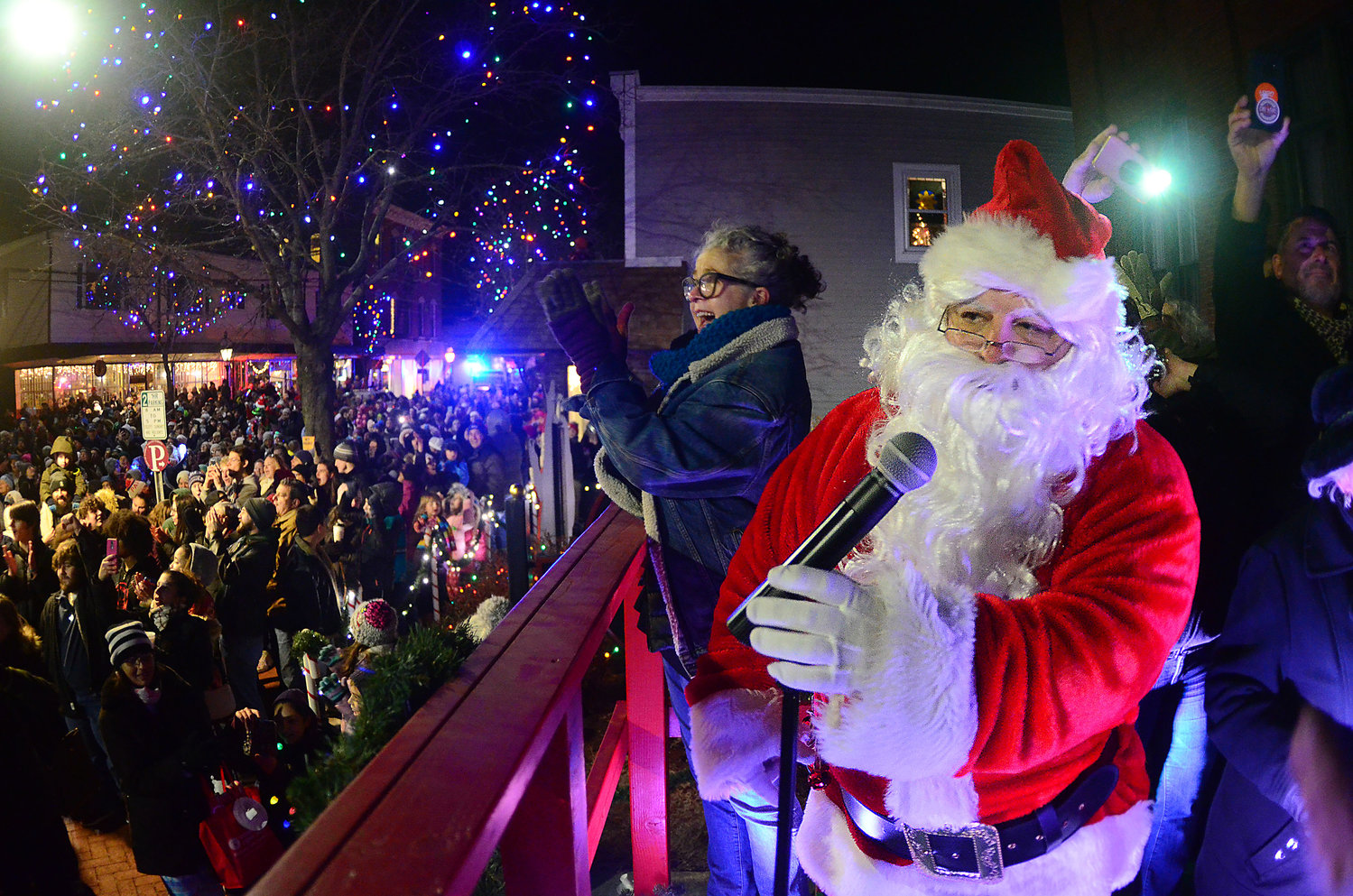 Santa helps count down the lighting of Main Street during the 2019 festival.
Richard W. Dionne Jr. 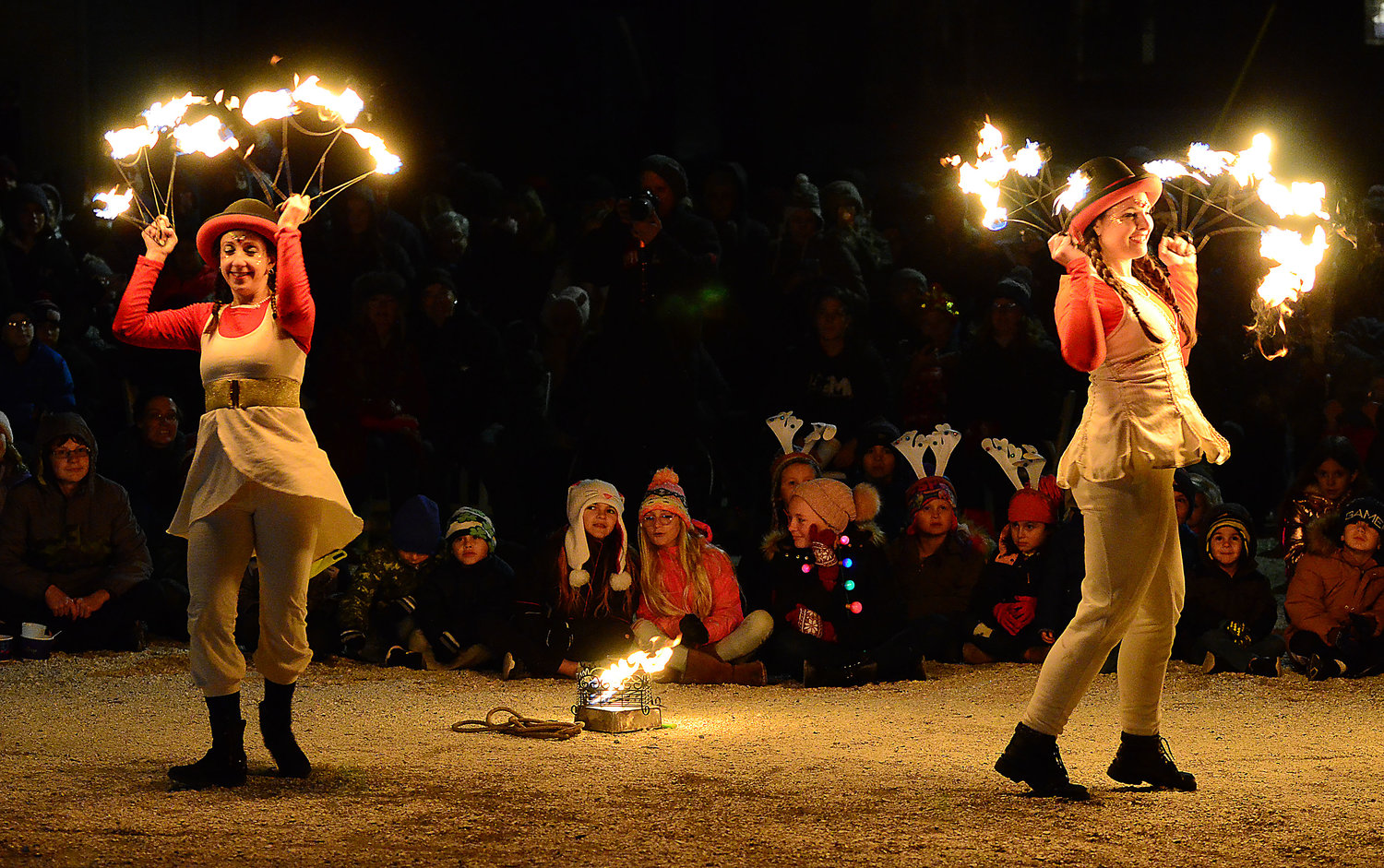 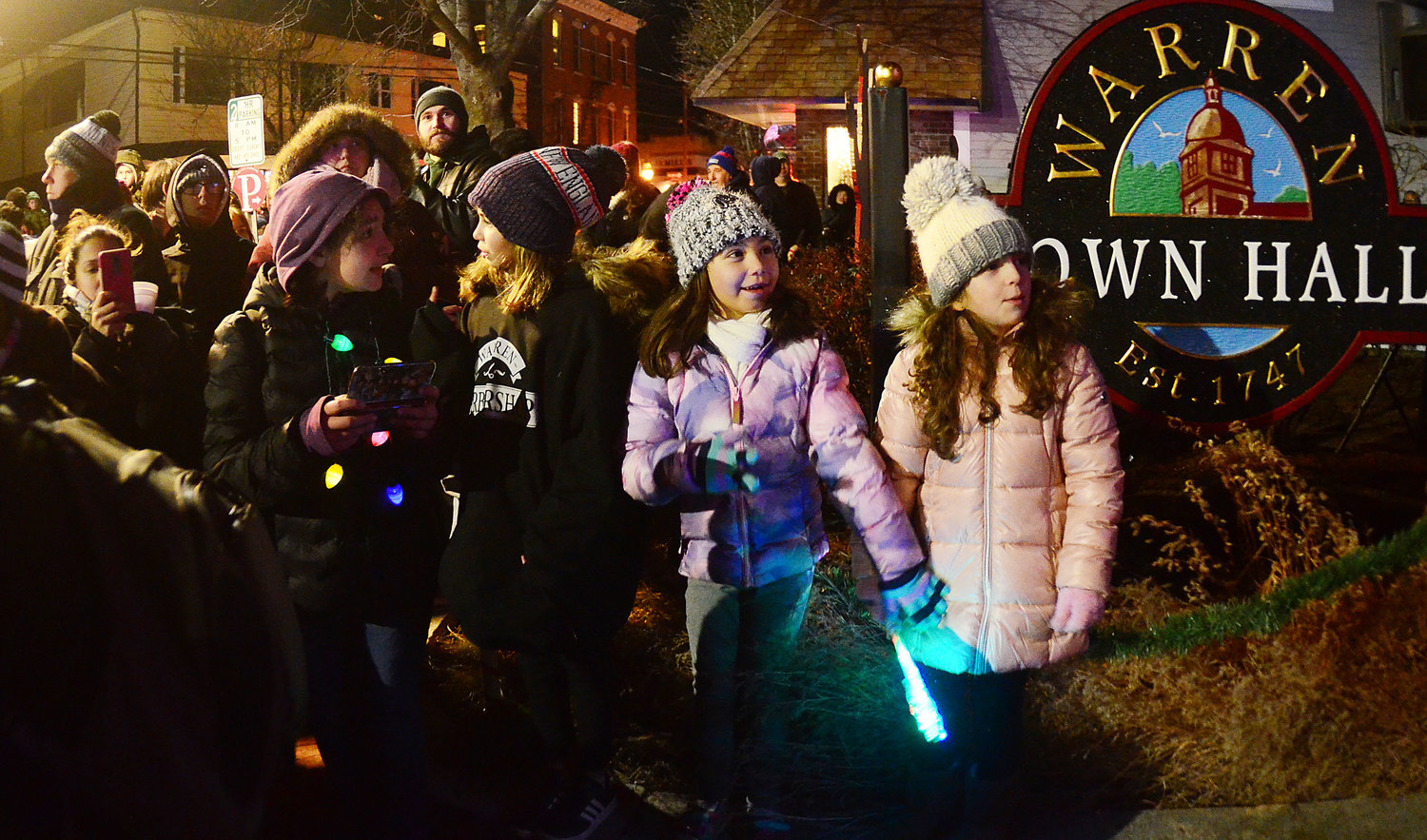 The beloved Warren Holiday Festival is back to its pre-COVID glory (with a few exceptions) this Friday and Saturday, kicking off the holiday season in dramatic, brightly-lit extravagance.

The festivities begin with the arrival of Santa on Water Street via fire truck at 5 p.m. The street will be closed off to vehicular traffic from Miller to Church Streets, with fire spinners in the Masonic Temple parking lot and magic shows from Marvelous Marvin (at the foot of Church Street) to delight the crowd and bountiful cider and hot chocolate for complementary enjoyment by all. The museums along Baker Street will be open, but to limited guest numbers to better prevent possible COVID spread.

Beginning at 7 p.m., the Mt. Hope Marching Band will lead a charge of flag bearers, dancers, and attendees as they count down to the illumination of Water Street and the town Christmas Tree. They will then lead the group to Town Hall, where a reception of town officials and Santa will welcome the crowd and prepare to count down to the colorful illumination of light displays along Main Street.

“Usually, in the past everyone would go over to Armory and have pizza and beer and a rock band would play but we’re not doing it this year — too crowded” said Marilyn Mathison, the event’s organizer since 1997. “We’re suggesting that everyone have their own little pod parties instead.”

The fun will continue at 12 p.m. Saturday, with Santa coming back on his fire truck and riding throughout the downtown to greet visitors. He will end his ride at a to-be-announced location for a scavenger hunt. Mathison said that businesses throughout the town will participate in kid-friendly activities and games, such as lessons on how to play marimbas and xylophones, and how to construct Native American corn husk dolls. Blount Fine Foods will also be on scene handing out complementary mac and cheese.

As Mathison says, the festival is like the “anti Black Friday,” because everything is free to enjoy.

Mathison calling it her last festival
For 23 years, Marilyn Mathison has spearheaded the strenuous effort to transform downtown Warren into something more reminiscent of Bedford Falls or Stars Hollow — carrying a torch that was first lit 33 years ago by former Town Councilor and Downtown Historic Merchant’s Association member Catherine King Avila.

“I came from San Diego, big city, and I thought this was really cute,” she said of why she took over the planning for the festival in the first place. “I had been here for two years when Catherine moved. My girlfriend Ina Anderson and I stepped up to the plate and took it over and kind of tweaked it, and her husband was a professional clown so he had contact with a lot of entertainers. That’s kind of how we got started having fire spinners.”

As the years passed and she kept planning festivals, additions here and there would be tested, adopted into the tradition, or discarded.

“I thought it would be perfect if we could get the band to come and play one year. They were happy to do it because we were able to raise money for one of their annual trips,” she said. “That started becoming a tradition. We hired a choir to come and sing...Things that people liked I do over and over again.”

Mathison, who works as a freelance bookkeeper and the Director of Finance at the nonprofit food organization Hope & Main, said that she usually raises around $10,000 for the event. If there’s extra left over, she’ll pump it into more entertainment. “Stilt walkers or whatever I can find,” she said.

After dealing with a significantly reduced event last year during the spiking COVID-19 pandemic, Mathison said that it has been getting more and more tiring organizing the event each year, so she’s calling it quits after this one.

“I will help whoever wants to take over, but I’m not going to do it anymore,” she said.