The Town of Warren will be moving forward with several projects in the New Year, which we've broken down here. 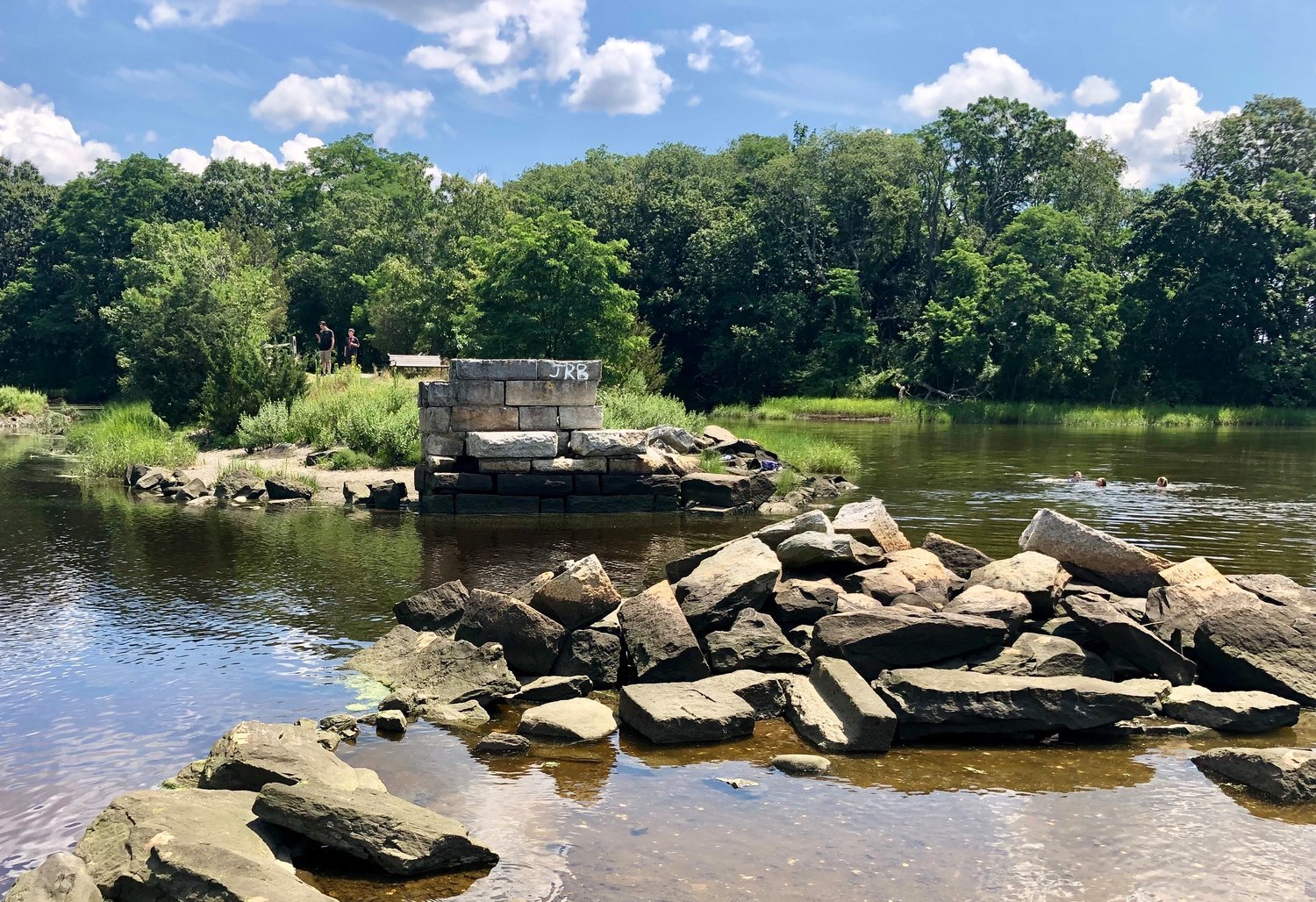 The old broken bridge that once spanned the Kickemuit River near Child Street will begin its complete restoration in the spring of 2022, according to Town Planner, Bob Rulli.
Richard W. Dionne Jr. 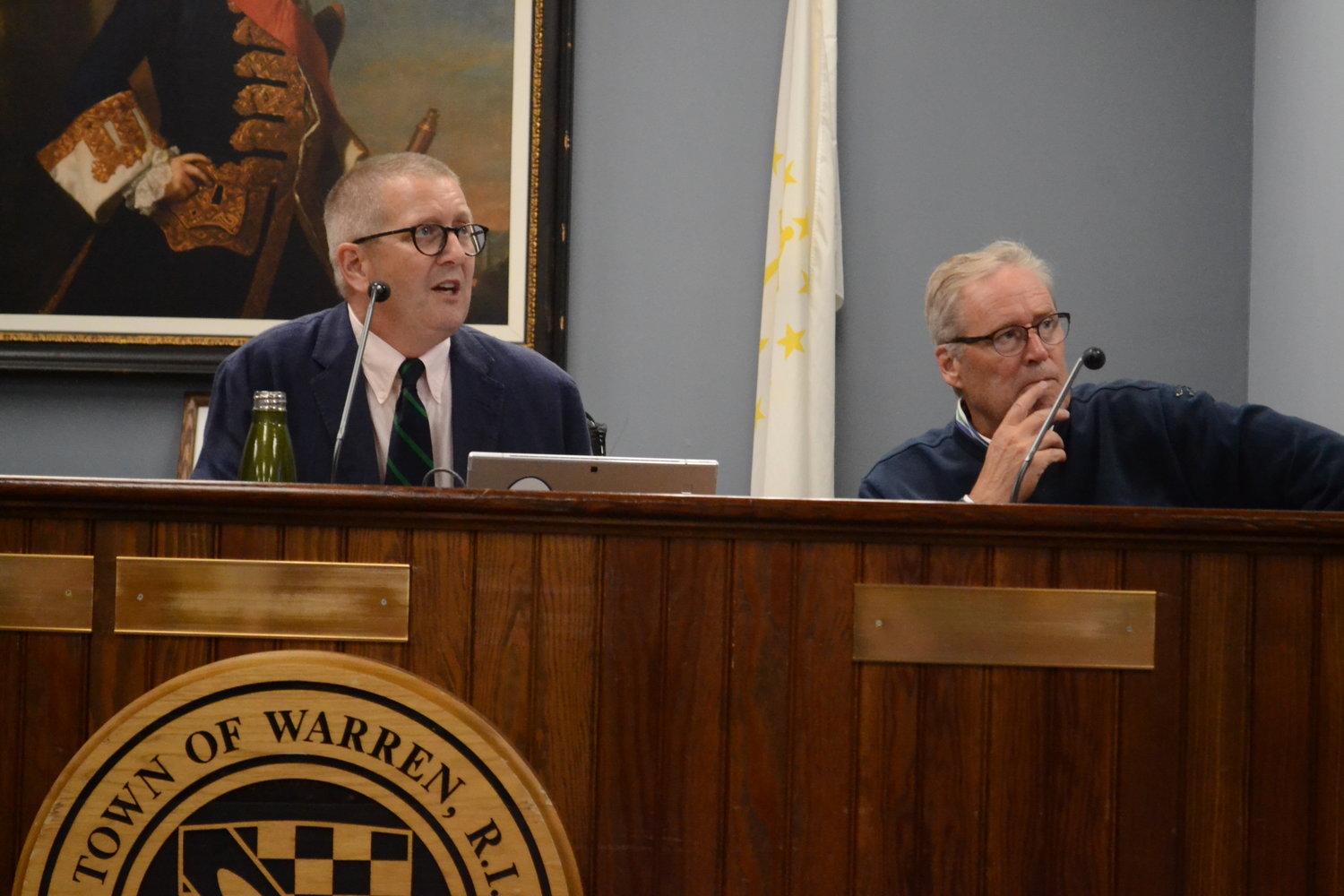 Town Planner Bob Rulli (right), with Arnold Robinson, Regional Director of Planning for Fuss & O’Neill, during a public meeting session on the Market to Metacom redevelopment plan in September of 2021.
Ethan Hartley 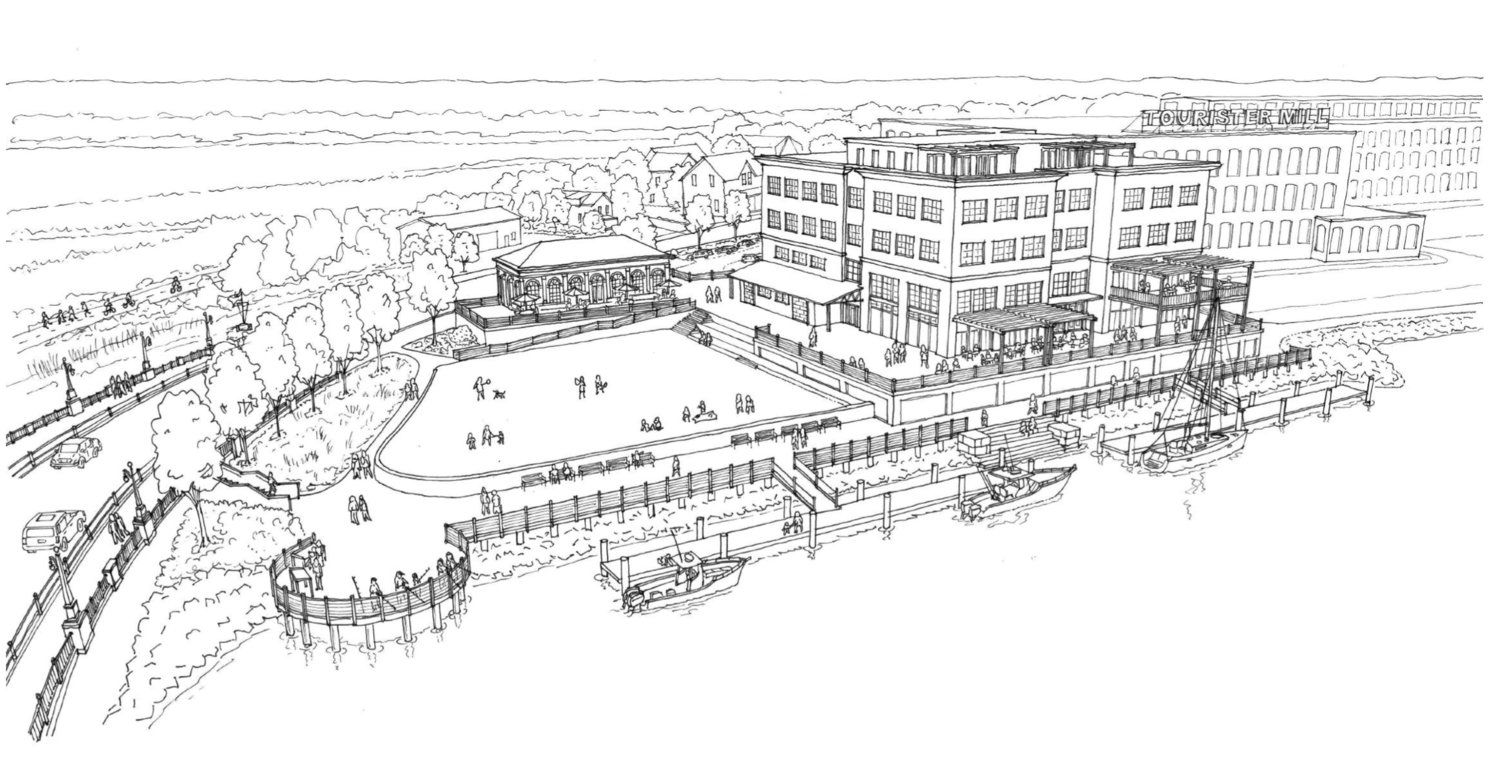 The Warren Gateway project currently in pre-development through a memorandum of understanding with a local developer is on shaky ground, as the town has requested more information and an additional meeting but have yet to schedule that meeting.
Fuss & O'Neill
Previous Next
Posted Friday, January 7, 2022 8:00 am
By Ethan Hartley

The Town of Warren will be moving forward with several projects in the New Year, according to town Director of Planning and Community Development, Bob Rulli.

The projects include lofty aspirations like implementing the first large piece of the Market to Metacom redevelopment plan, as well as more immediate projects to beautify the downtown area through the utilization of available American Rescue Plan dollars for storefront rejuvenation.

Some of the projects and their status going forward in 2022 include:

Market to Metacom
The town’s ambitious Market to Metacom redevelopment plan — which includes, in brief, plans to incentivize more environmentally- and pedestrian-friendly developments along Metacom Avenue and move people from the flood-imperiled areas of Market Street to make room for wetlands restoration — will see progress this year as the town looks to put forth comprehensive form-based code to codify rules for the future development of Metacom Ave.

Rulli said the form-based code is “already drafted,” and will be included in a proposed update to the town’s comprehensive plan — which will then need to be approved by the Town Council and, subsequently, the state’s planning arm of the Department of Administration.

Rulli said he envisions having the comprehensive plan changes submitted to the state by July. When details of what will be included in the form-based code for Metacom Avenue developments become available, we will report those as well.

The final report for the plan has been submitted, and Rulli has applied for grants to assist with the funding of the form-based code and wetlands reclamation aspects of the project.

Rulli also announced recently that Warren was chosen as a participant in the “Envision Resilience Narragansett Bay” studio project coming up in the spring, which is underwritten by the Schmidt Family Foundation and brings in students and professors from various colleges and universities to participate in projects associated with addressing sea level rise and resiliency. Warren will be hosting students from the Syracuse University School of Architecture.

Gateway Project on uncertain ground
Rulli expressed concerns about the current proposal before the Town Council regarding the Warren Gateway, a project currently in pre-development between the town and Barrington developer Giovanni Cicione via a non-binding memorandum of understanding (MOU).

Rulli said that he has been frustrated that Cicione has yet to set up a meeting between his financial advisors and the town, which the town had requested to clear up questions and concerns regarding the financial feasibility of Cicione’s plan, which has gone through multiple iterations and now includes the construction of a large building on the site that would house Twelve Guns Brewery, a restaurant, and potentially a boutique hotel.

“I think the fact that since November, the council specifically requested that he set up a meeting with the council, the solicitor and his financial advisors, and it hasn’t [happened], yeah that's a red flag for me,” Rulli said.

Cicione said on Monday that due to the adjustments the town has requested regarding the project, it has taken time to get updated engineering plans and financial estimates in order to present to banks, which has been the cause for the hold-up in terms of setting up that meeting.

“There’s only so much you can do. If you want a bank to loan you $12 million you have to make sure you get your numbers right,” he said, adding that he should have the updated financial information ready in what he estimates to be another month.

Rulli said that the MOU between Cicione and the town — which had already received one extension last year — expires in February, and if the council decides to not grant an additional extension of the MOU, the town will begin looking at other possible ideas for a project on that parcel.

“I think a project is going to go forward, and I’m excited about what that project will look like,” Rulli said. “If it's not with Giovanni, the town will have a much more active role in how it develops.”

Cicione said he hoped the collaboration and good faith negotiations between himself and the town will continue.

“I know what they’ve asked for and they know I’m moving ahead and spending money and the architects and engineers are doing what they can,” he said. “December and January is a tough time to move ahead with people taking time off, but I think now that we’re up and running again, we’ll see some of those deliverables they want to see come more quickly.”

Up to $250,000 for storefront improvements
With about $3.14 million coming to the town in American Rescue Plan money from the federal government, Rulli said that a straightforward and beneficial implementation of the money could come from allocating $250,000 of that towards the rehabilitation of empty or dilapidating storefronts in the downtown area.

The money would be limited to being spent in the town’s lone Qualified Census Tract, which denotes an area where at least 50 percent of residents are low to moderate income earners, and encompasses a large portion of Warren’s most business-dense land — including the upper areas of Market Street, Main Street, Child Street and Water Street.

The grants would be for up to $25,000 per participant and Rulli said that the town has already heard from four interested property owners. Storefront revitalization ranked second on a list of 10 priorities as voted on by residents and business owners in a poll sent out by the town in October.

The proposal to spend the money should come before the Town Council during their next meeting on Jan. 11.

Kickemuit Bridge repair finally going forward
Repairs to the broken bridge that once spanned the upper Kickemuit River south of Child Street some 80 years ago is finally set to move forward — after delays from the state Department of Transportation pushed its start date from the spring of 2021 — to what Rulli now tentatively believes will be the spring of 2022.

Rulli said that the project is being funded with about $5 million in state and federal dollars (no town money is being utilized), and that DOT will be in charge of managing and competing the project. Rulli said a contract has been awarded to Cardi Construction to perform the work.

“The exciting thing about that is it will be a composite bridge which will significantly reduce the time to install it, and the maintenance will be much less of a financial impact,” Rulli said.

Parking to be further examined
The issues associates with parking in the highly trafficked areas of Main and Water Streets will be further analyzed in 2022, Rulli said. Although a full-scale parking study doesn’t appear to be in the cards due to budget constraints, Rulli said that more engagement with the public and data gathering/analysis should be possible in the coming year.

Rulli says an answer to the parking issues may reside in the concept of shared parking, but that needs to be further fleshed out in terms of insurance and liability concerns.

“I look at churches, I look at schools, I look at opportunities where parking is under-utilized 99 percent of the time,” he said. “I think that will create the walking downtown that people want.”

A municipal broadband possibility?
An interesting concept floated by Rulli included the notion of creating a municipal-level internet service provider (ISP) to expand the reach of broadband access in the community, potentially using more federal dollars.

“We're small enough we could potentially build our own ISP,” Rulli said. “It's something I want to look at.” He added that particularly rural areas of Warren are in danger of being left behind due to lack of broadband access.

“When we look out at Touisset, no provider will pay money to bring fiber out there any time soon,” he said. “So, can we provide high-speed wireless connections out there? It’s important for emergency services, education, tele-medicine. For the town to be competitive and desirable in this new environment, access to broadband is critical.”

Improving broadband access ranked fifth out of 10 priorities for ARPA spending on the aforementioned town poll. The town had proposed a $100,000 allocation from its ARPA pot to improve broadband access, but details have not emerged yet exactly how that expenditure would accomplish the goal, or for whom it would benefit in town.