The Tiverton softball all-stars beat Massachusetts-Canton 9-4 to split their two games over the weekend in the 12U softball regional tournament in Bristol, CT, on Sunday. Tiverton loss 12-1 to … 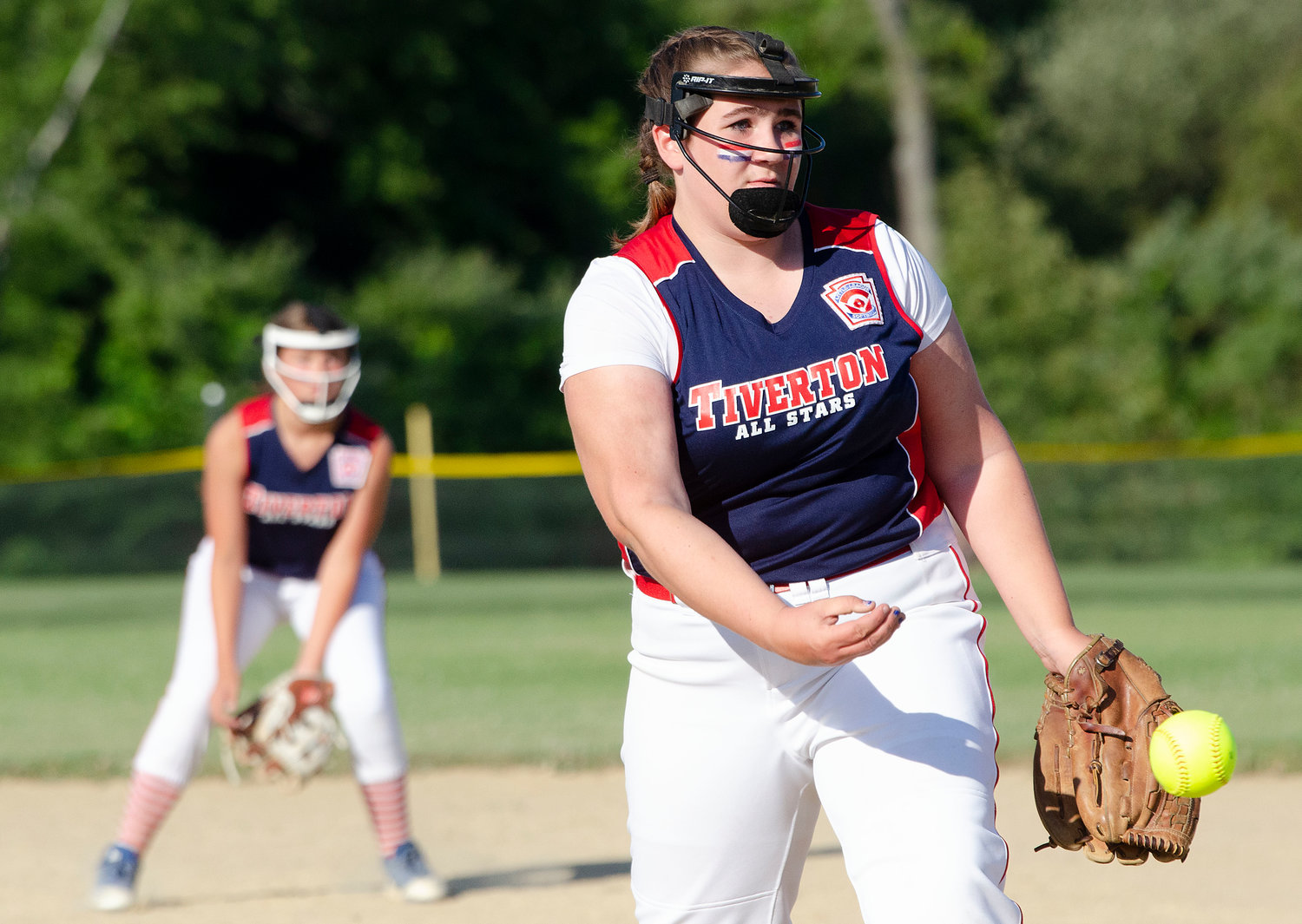 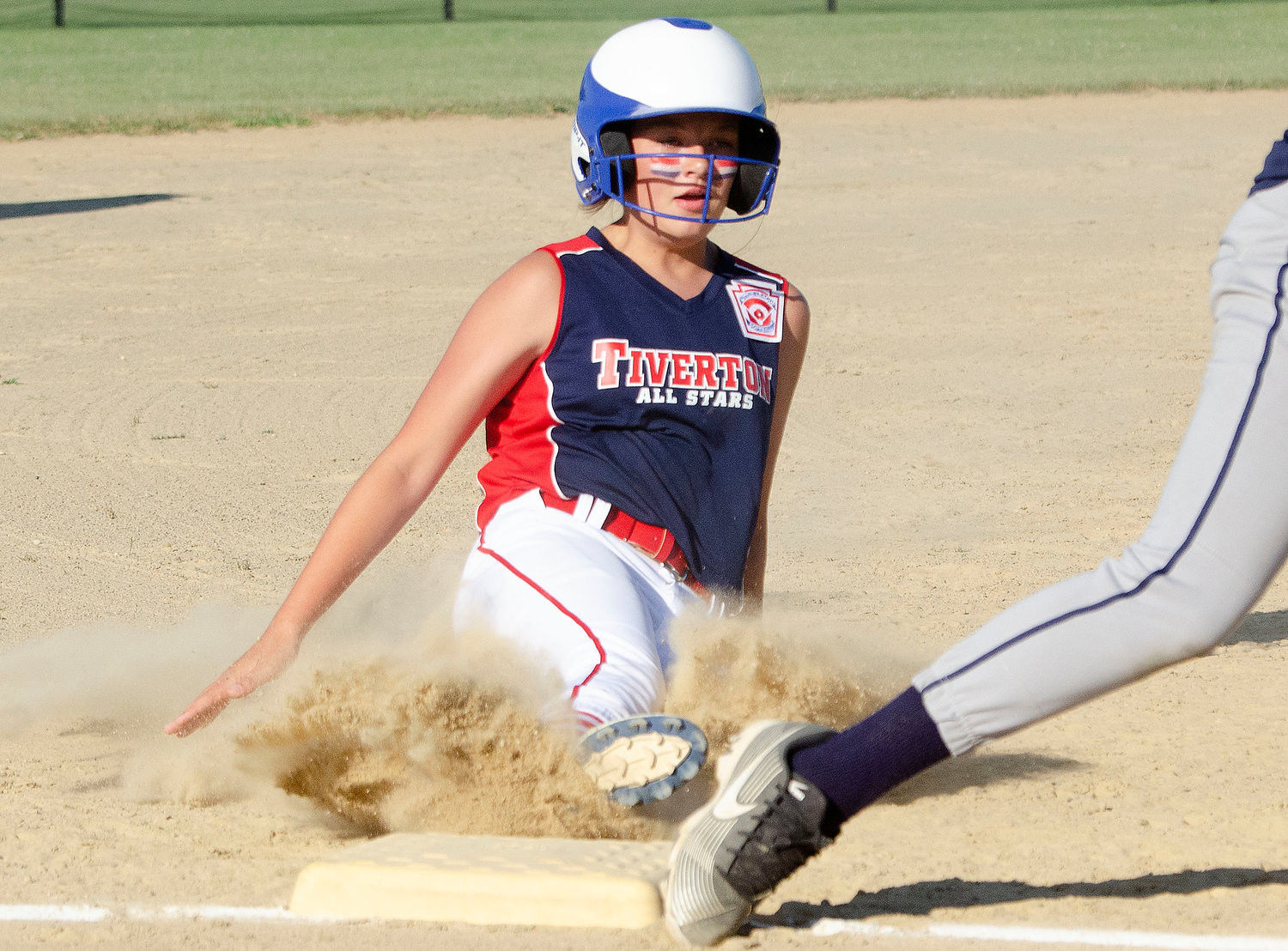 Brooke Sowa slides into third base safely in the first inning against South Kingstown. 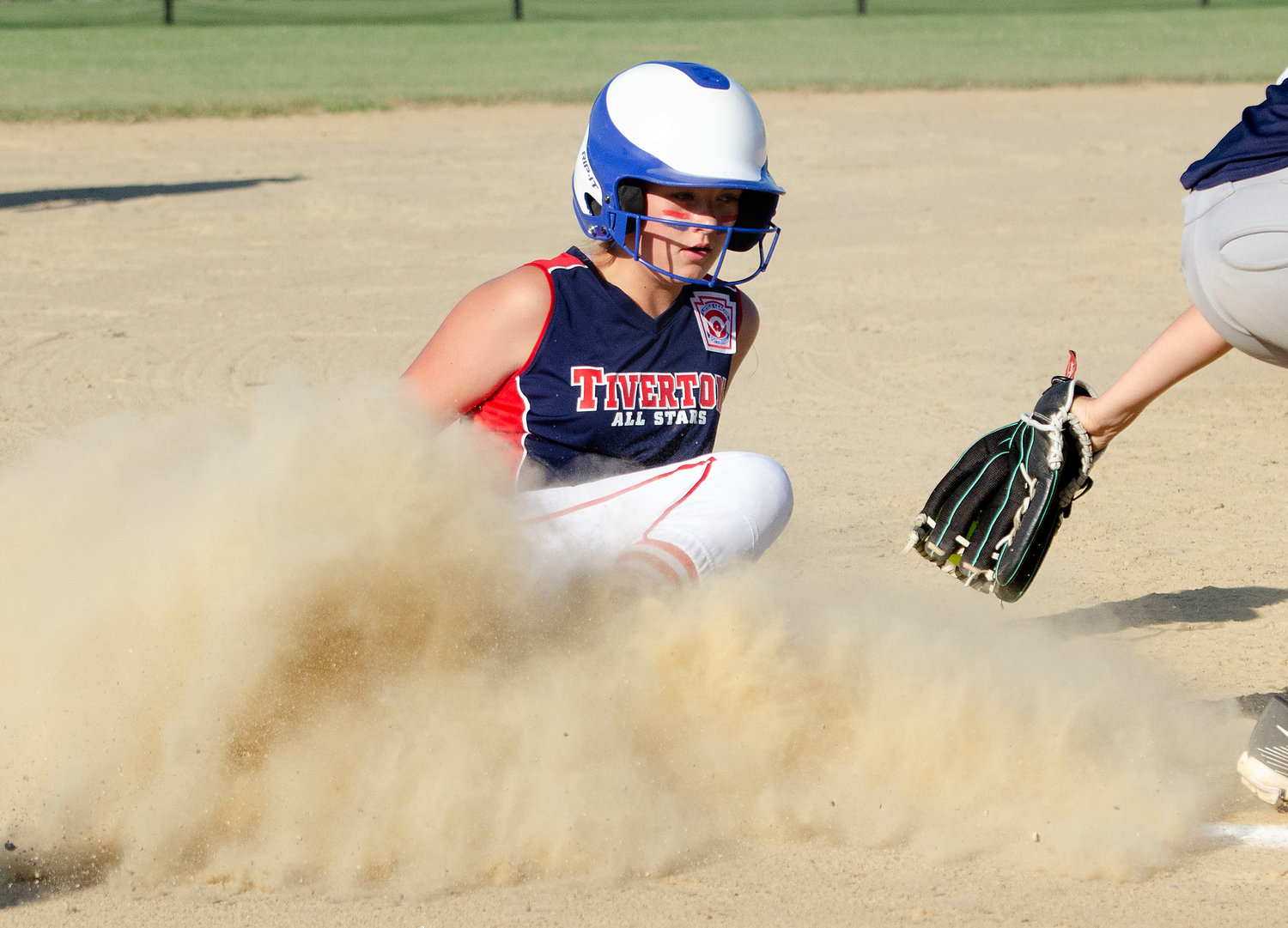 They bounced back and showed their mental toughness. Coaching wise we adjusted and got back to our aggressive play and took advantage on the base paths. They were ready for the game. The base running was consistent with how we like to play.”
Head coach Mike Martin
Story by Richard W. Dionne, Jr.

The Tiverton softball all-stars beat Massachusetts-Canton 9-4 to split their two games over the weekend in the 12U softball regional tournament in Bristol, CT, on Sunday. Tiverton loss 12-1 to Connecticut-Milford in their first game on Saturday and must win out to stay alive in the Tournament.

“It was a lot of nerves on a big stage,” said head coach Mike Martin of the team’s loss on Saturday. “It was an eye opener for the team. They had a lot of jitters and for our girls it was great to have played Connecticut first. It helped them get through their nerves. They weren’t spooked after the game and they understood that they can certainly compete with these teams down here.”

Tiverton breaks out for ten hits in game two

“They bounced back and showed their mental toughness,” Coach Martin said. “Coaching wise we adjusted and got back to our aggressive play and took advantage on the base paths. They were ready for the game. The base running was consistent with how we like to play the game.”

Tiverton scored three runs in the first inning when Cannon, Parisee and Martin all walked to reach base, stole second base and came around to score on passed balls as Canton pitcher Kennedy Burke had trouble with her control, to give Tiverton a 3-0 lead.

Canton got a run back in the bottom of the first off Tiverton pitcher Addie Wolfe who threw well in the victory. Wolfe struck out three, walked three, and allowed six hits and four runs in six innings of work.

Luis and Sowa led off the second inning with back to back singles. Both players scored when Cannon, Parisee and Martin all walked to give Tiverton a 5-1 lead. Aubuchon stepped to the plate with the bases loaded and drilled a line drive into the left field gap. Cannon and Parisee scored to give Tiverton a 7-1 lead and Martin scampered home on Wolfe’s RBI ground out to first base to make it 8-1. Martin scored again in the top of the sixth on a base hit by Wolfe to give Tiverton a 9-4 lead.

Canton scored two runs in the third and a solo run in the fifth inning. Tiverton played well defensively, behind Wolfe with 18 put outs and just one error.

The team was also battling another opponent, the heat. Weather through the weekend was in the mid 90s and the girls have been out in the sun practicing and playing games.

“The girls have been really struggling with it,” Coach Martin said. “We’ve been tstressing hydration and trying to limit their time out in the sun.”

But last night’s game took its toll. Carlie Martin felt dizzy and was diagnosed with heat stroke after the game. She’ll be a game time decision for today’s game against Vermont at 1 p.m. all games will be broadcast on ESPN.

Kudos for the Tiverton team

“The little league staff have made it a point to tell us that our kids have been polite and courteous on several occasions,” said Coach Martin. “If nothing else, that’s been a great takeaway we are proud of that.”

Shortstop Elodie Cannon made a super catch to end the second inning during the team’s game against Connecticut on Saturday. The catch was highlighted by ESPN and made their top ten plays. Cannon ranged from short into foul territory in left field, made the catch, slammed into a wall and still hung on to the ball for the out.

Trouble with the phones

The field in Bristol has phones in the dug out for coaches to call the score keeper to make changes during the game. It’s been challenging as coaches have to make each change as the happen and not in advance. Coach Martin normally coaches third base when the team is on offense and has had to switch with assistant coach Jess Silvia during innings when changes had to be made.

“I’ve been having to stay in the dug out and manage that, it’s been a huge learning curve,” he said. The logistics of it, plus we are trying to get everybody in and give everyone a chance. But it’s become a nightmare in the dugout to try and manage and keep all of the pieces in place with out misstepping.”

Team bonding and having fun

“The girls are really enjoying themselves it’s been a huge bonding experience,” said Coach Martin.  “The team bunks together in the same room with 14 bunk beds. They’ve been having a blast.”

Coach Martin gave an enormous shout out to Jen Wolfe who stepped up to help out the team when they needed a second female coach to stay in the room with the girls and coach Jess Silvia. Male coaches have to stay in a separate room according to Coach Martin.

“Jen has been helping out and keeping us going down here,” he said. “She has been managing the movement of the girls, meal coordination, taking the girls uniforms to the laundromat to get washed every day and helping with injuries and illnesses surfacing through out the week. It’s been a huge help.”