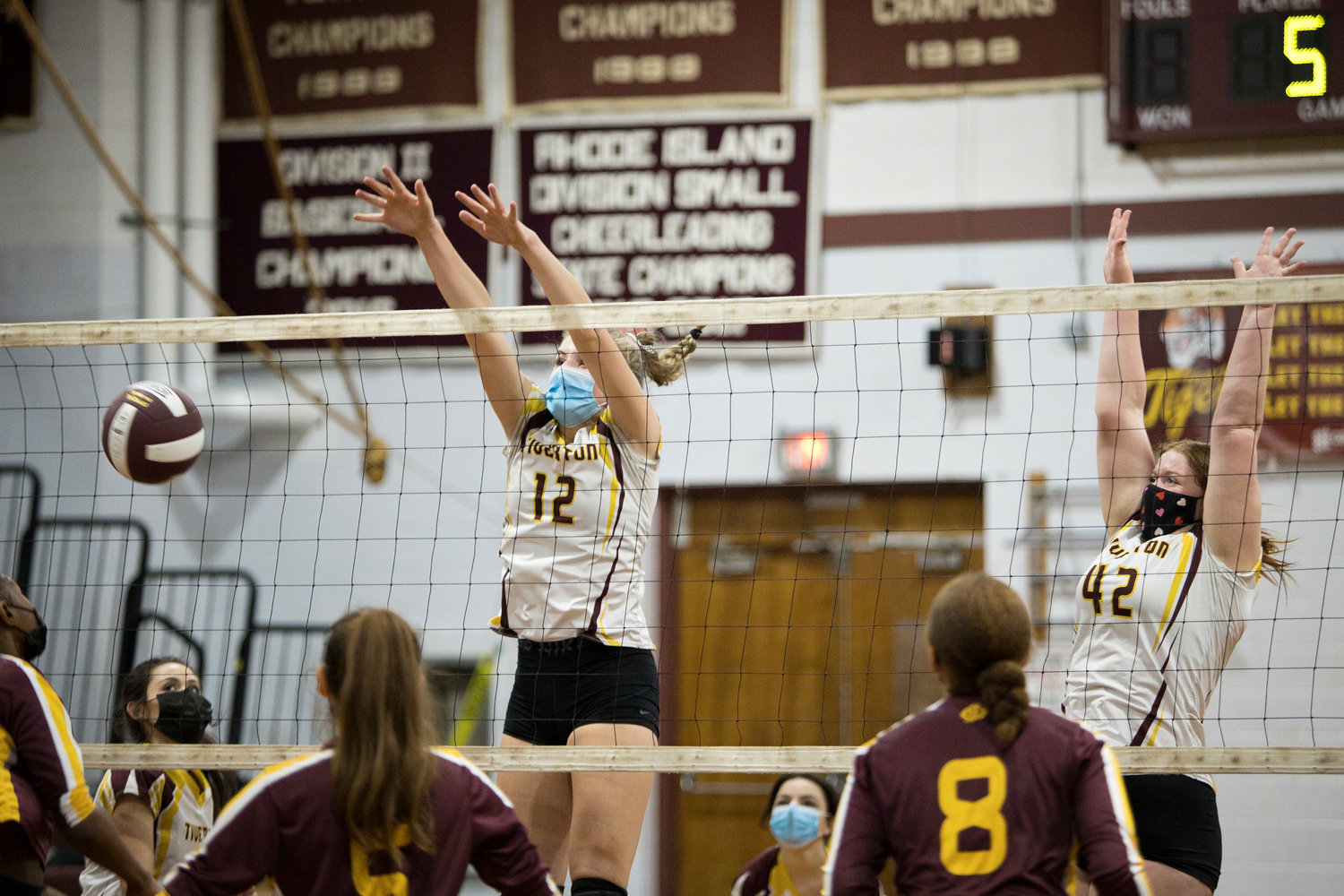 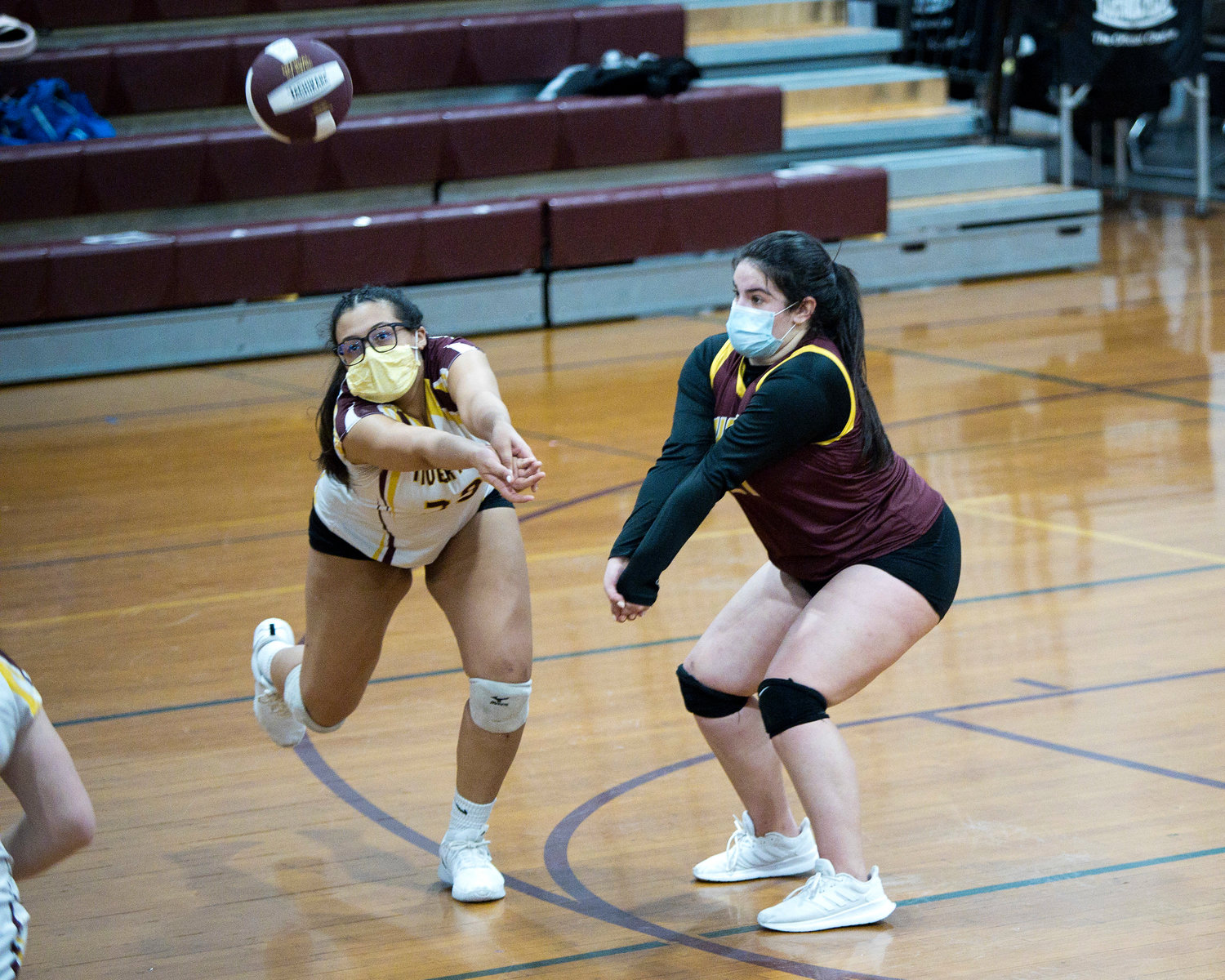 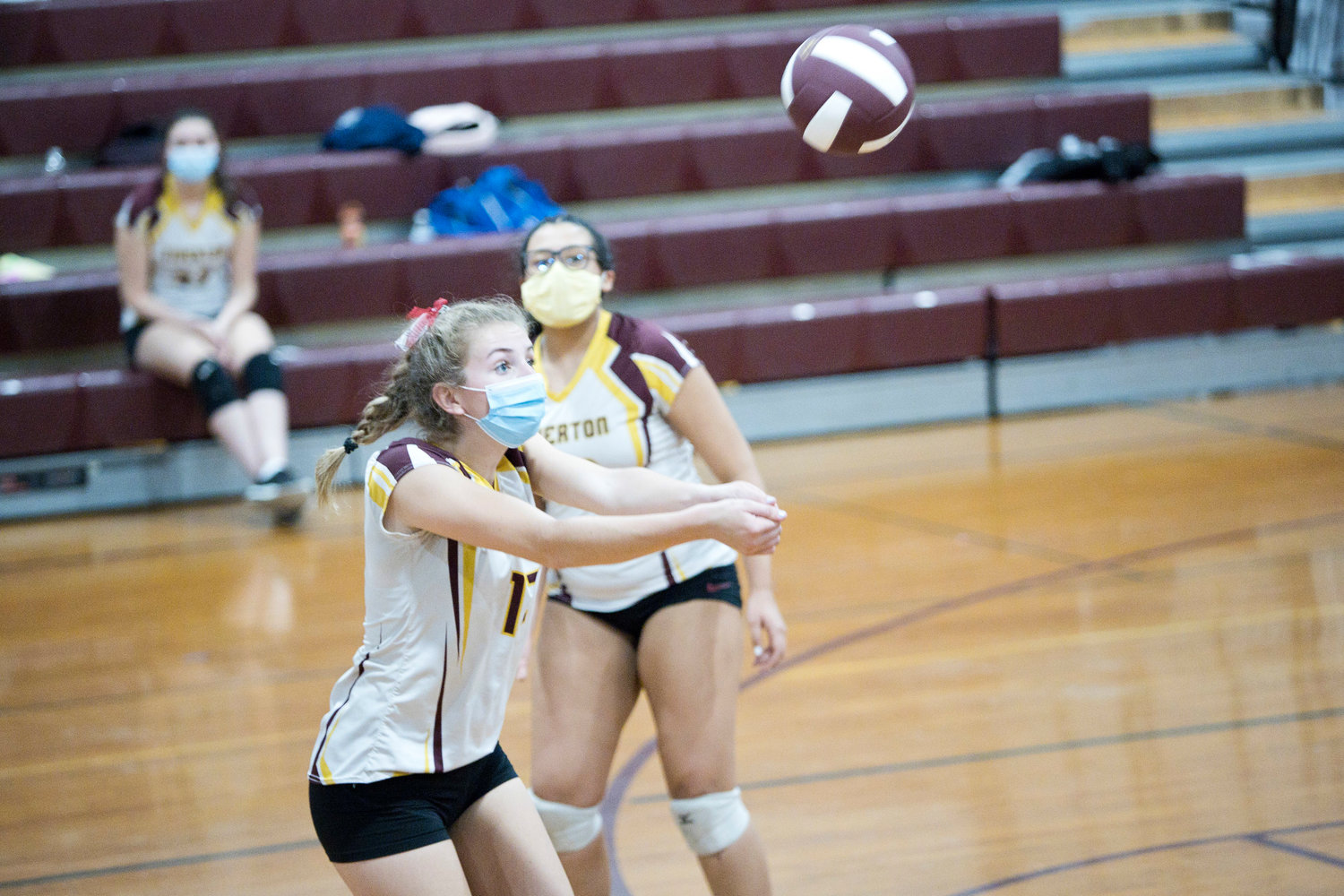 Molly Richardson passes the ball to a teammate during Friday night's game against Times Two Academy. 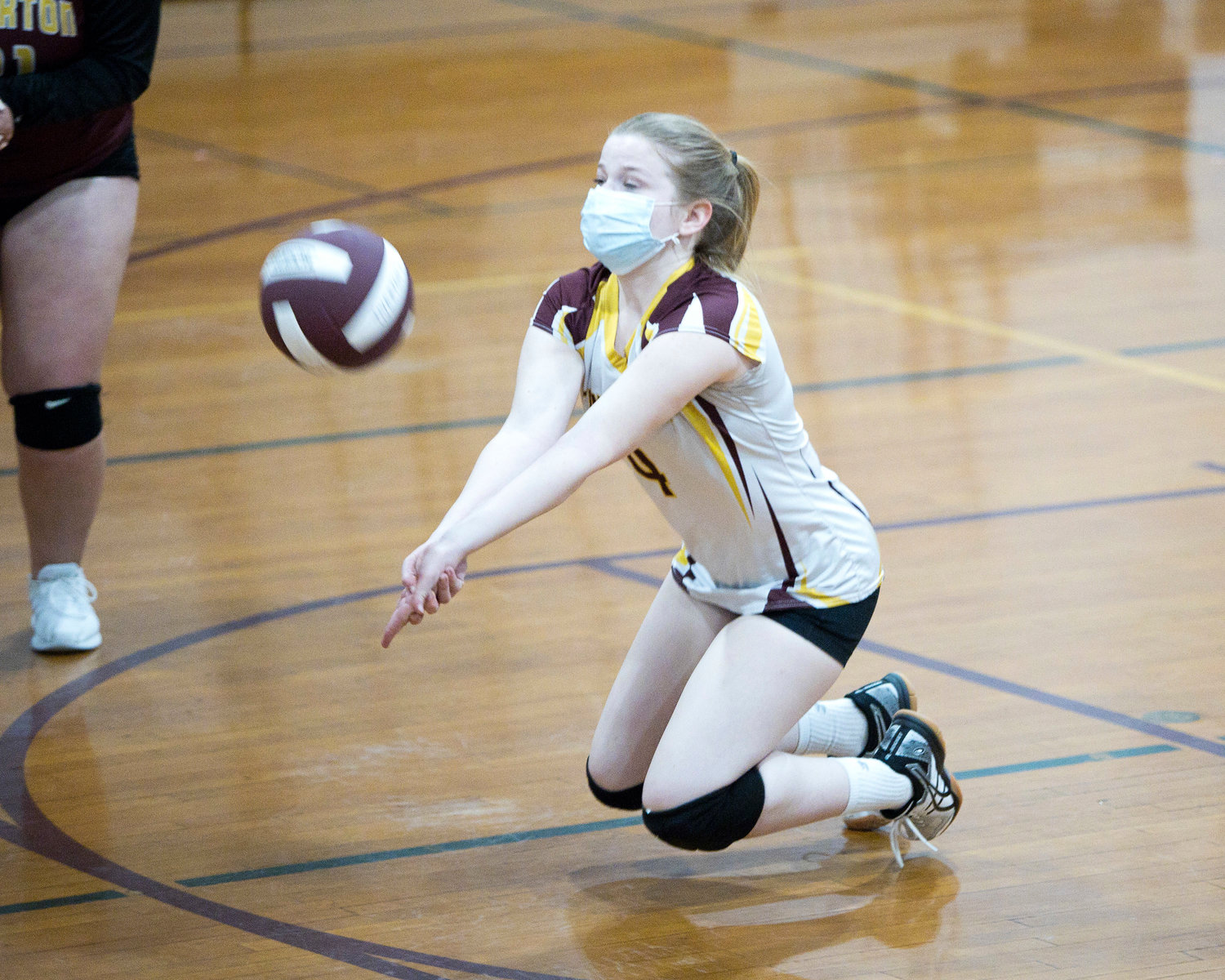 Keira McQueen dives under the ball, keeping it in play. 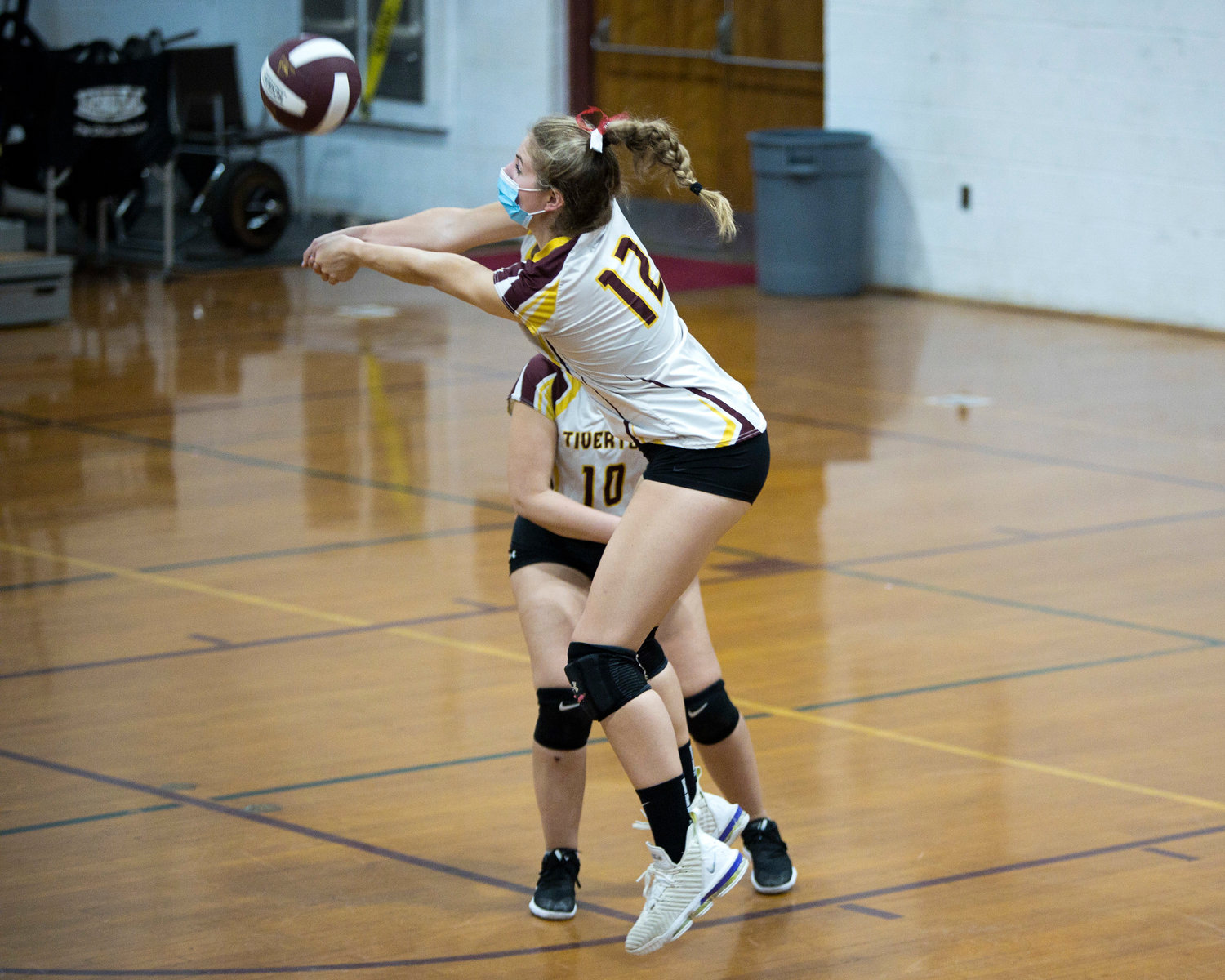 Molly Richardson sends the ball back over the net during Friday night's game against Times Two Academy. 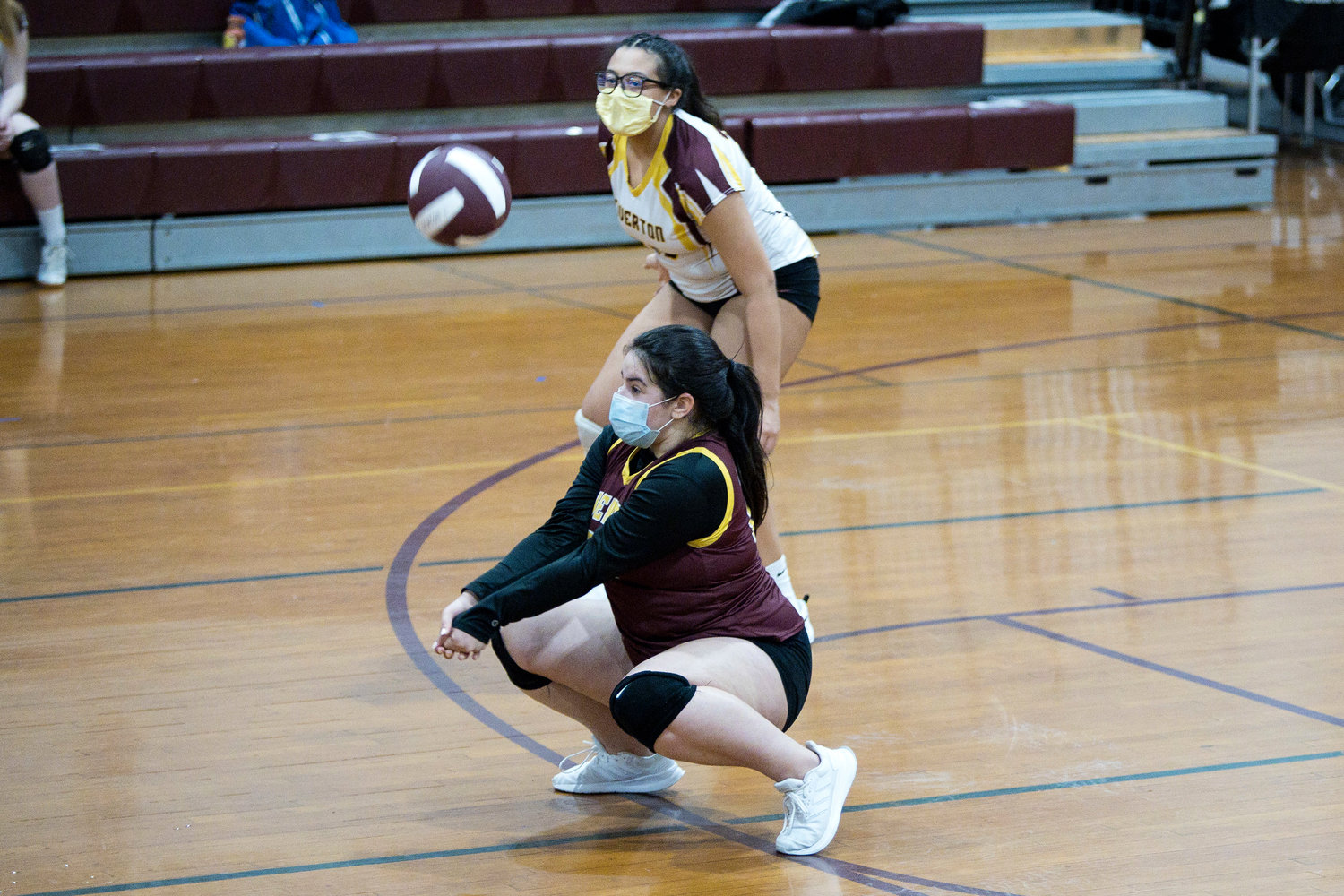 Olivia DeMacedo bumps the ball to a teammate during Friday night's game against Times Two Academy. 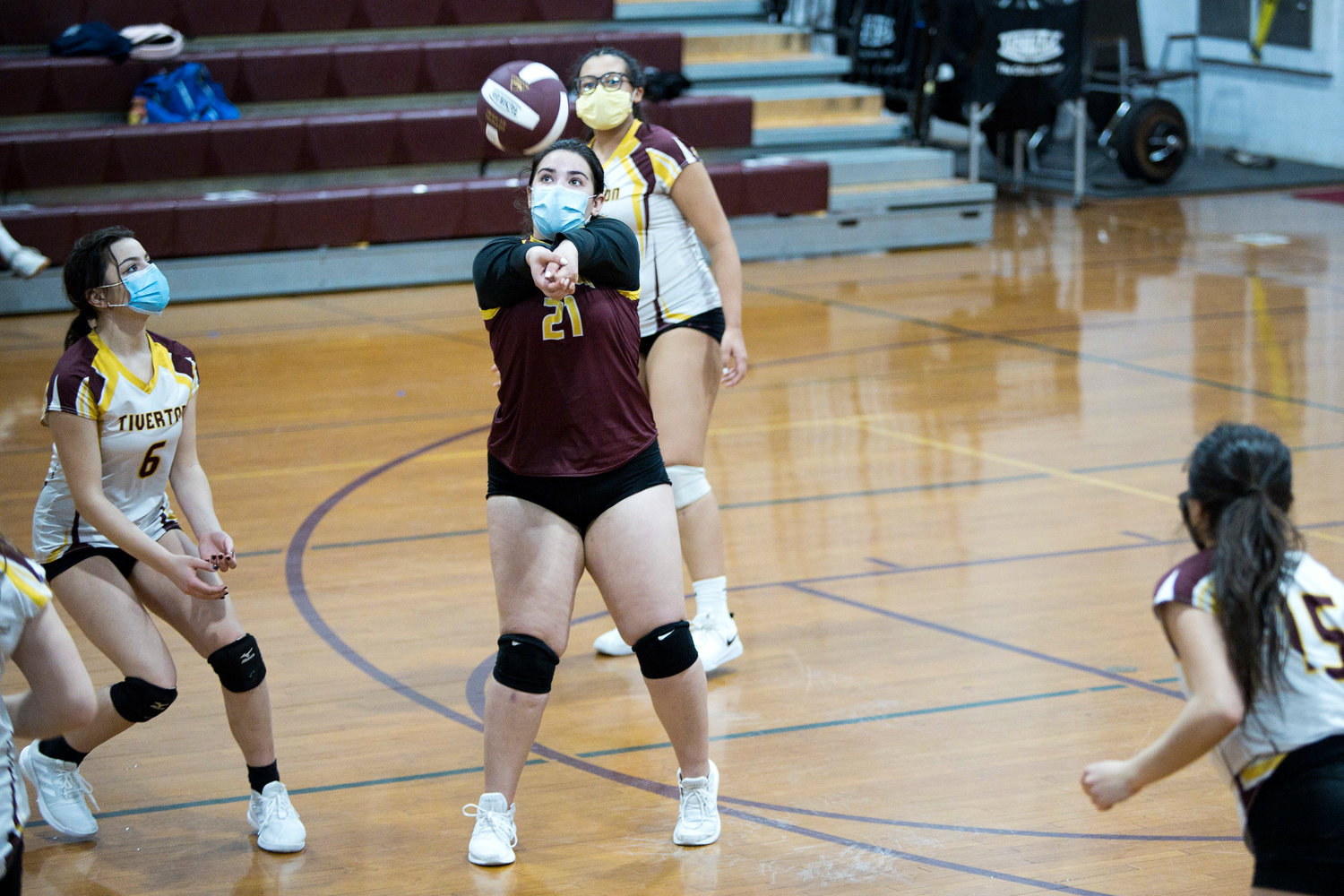 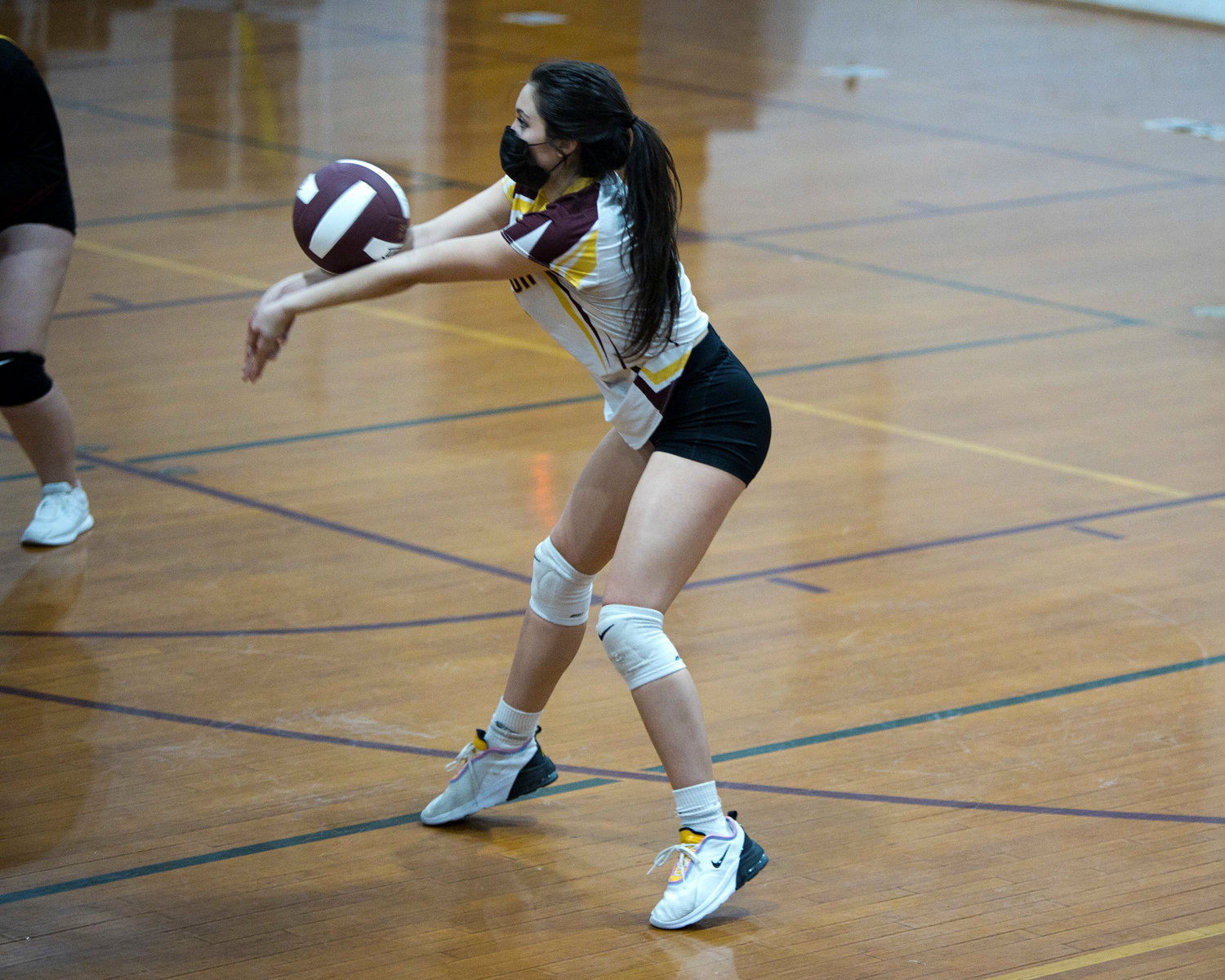 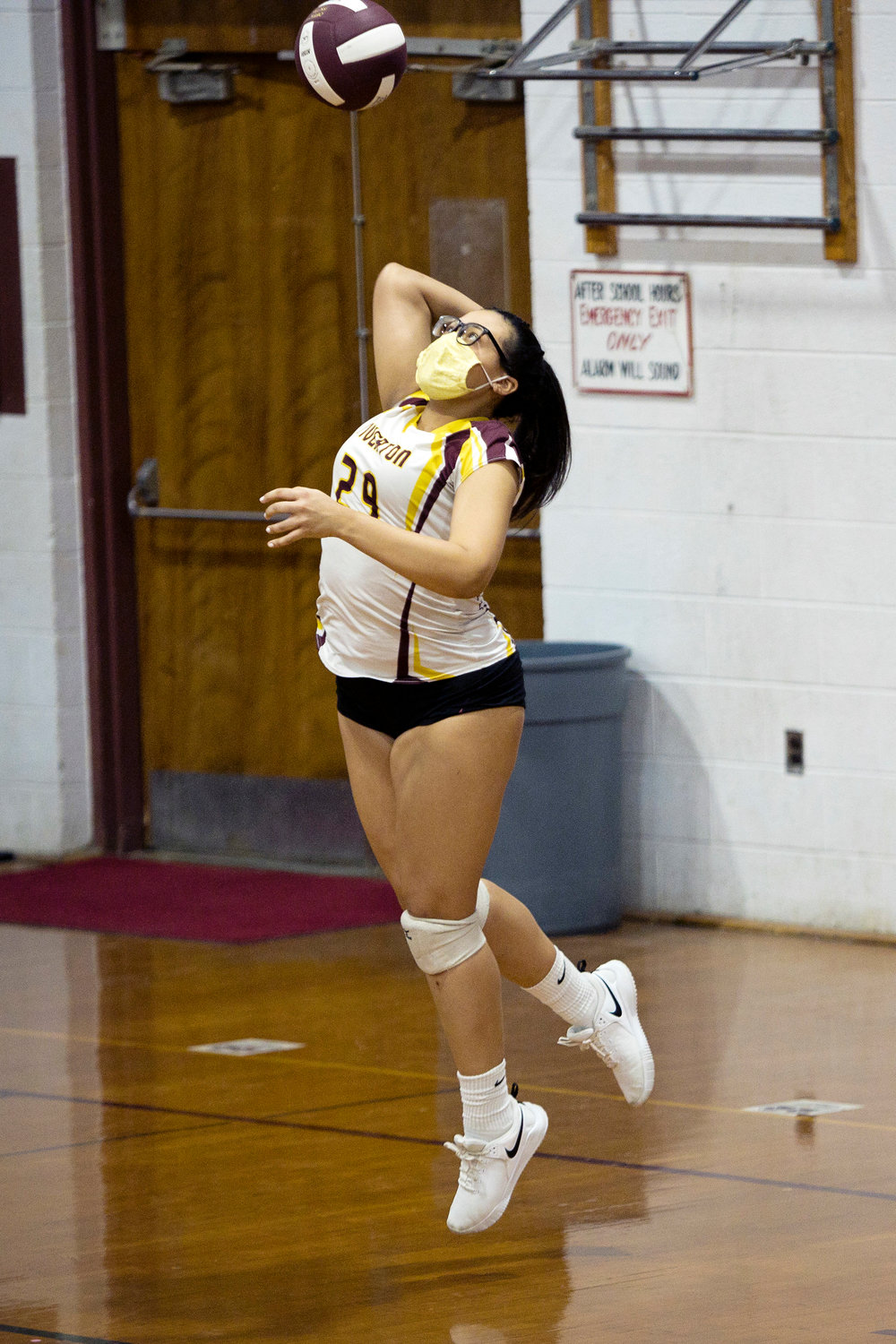 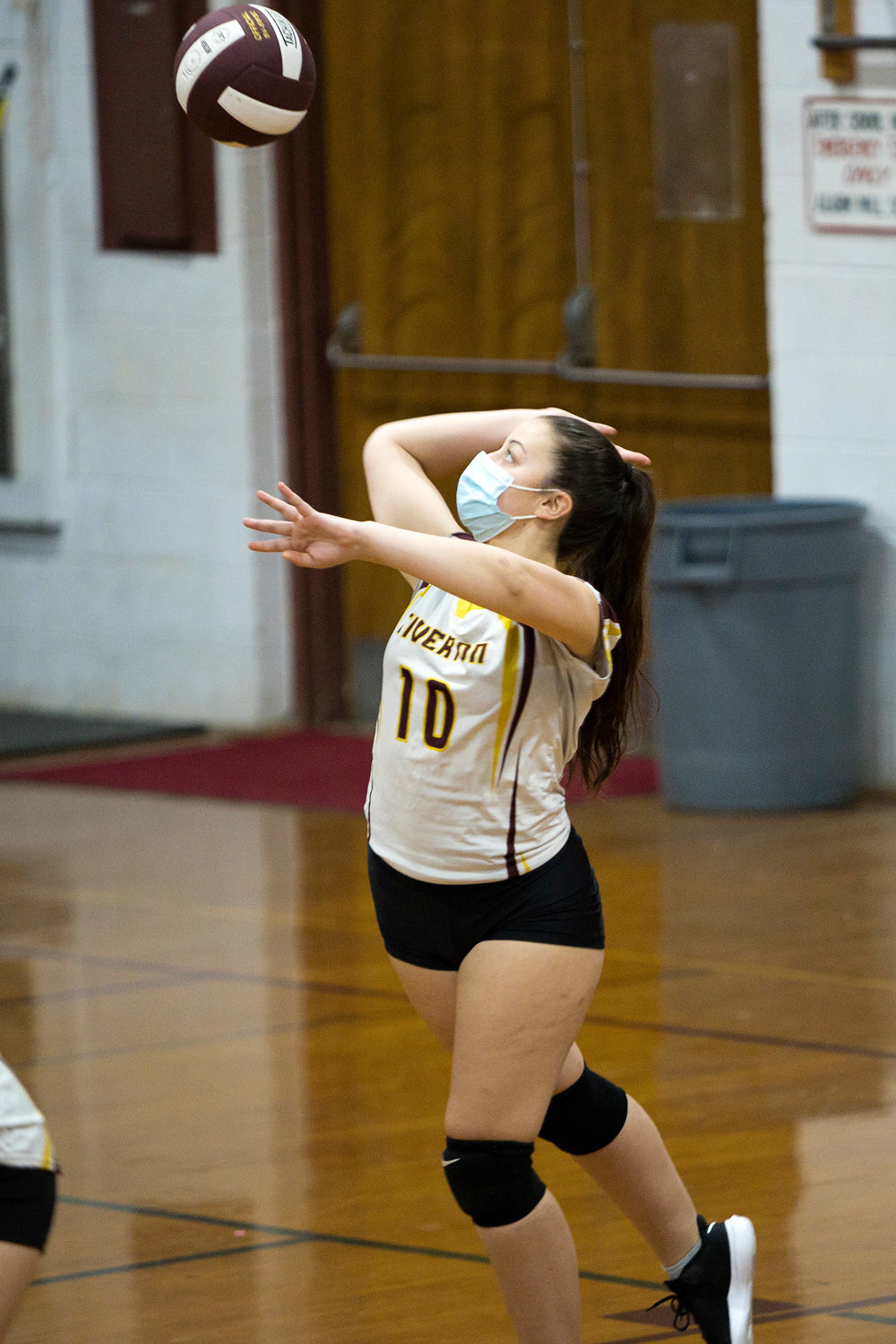 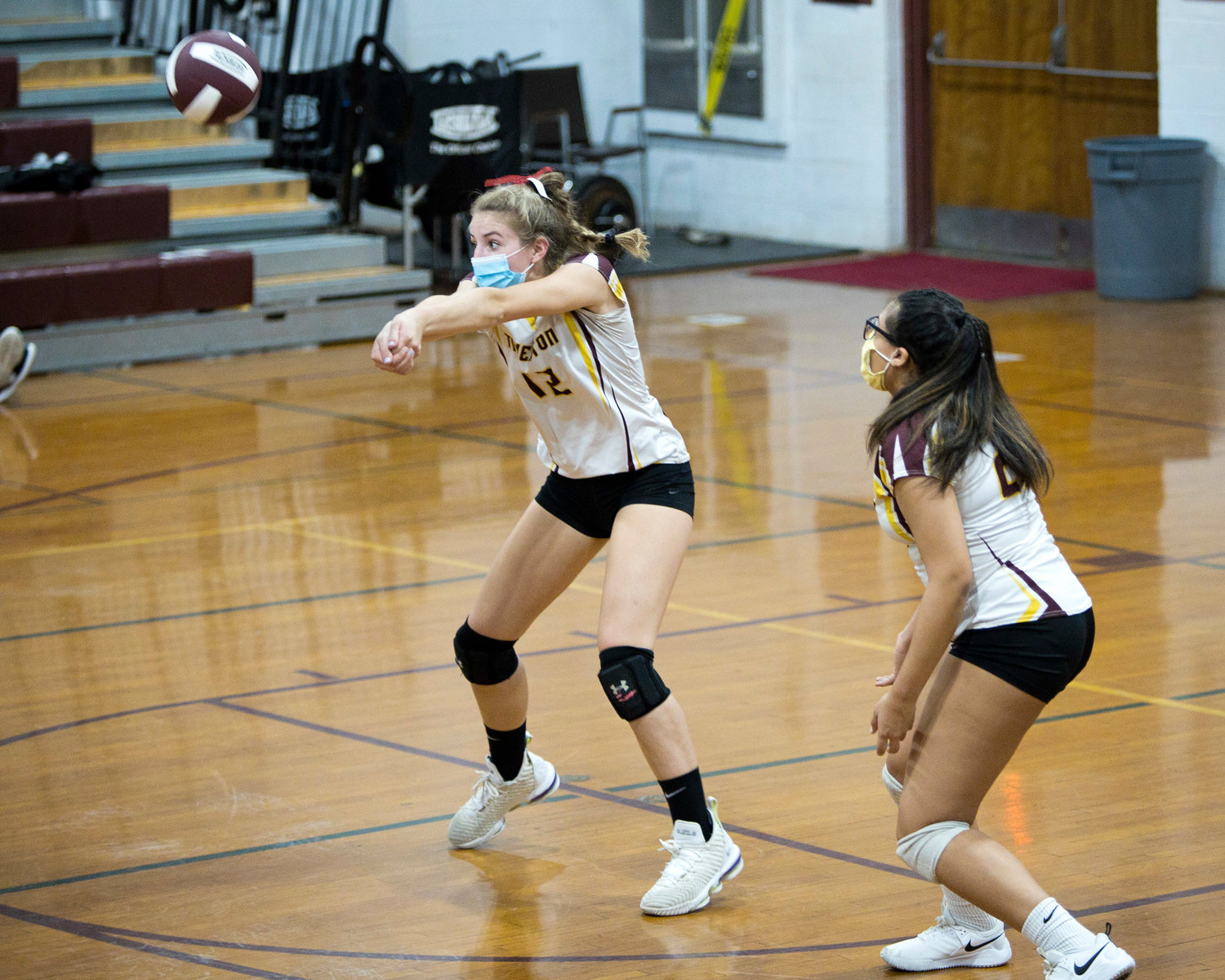 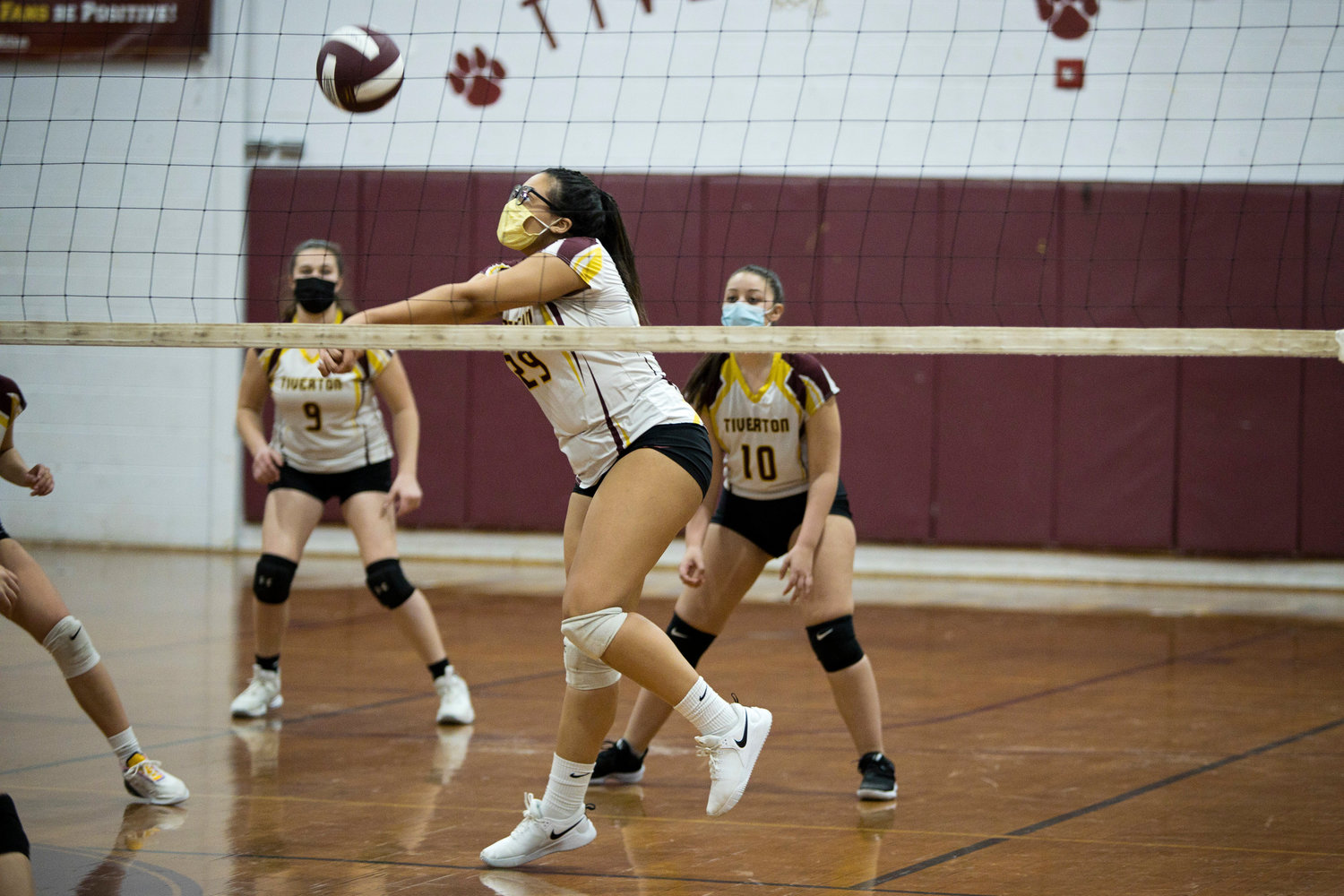 Richardson a middle hitter, recorded 10 kills and added 7 blocks on defense. Miranda, a left side hitter, bashed 25 aces and added 4 kills during the two wins.

“Molly and Olivia remain our strongest players,” said Tigers head coach Kerri Allder. “Molly is a dominant force at the net. She is tall and very athletic.”

As a middle hitter, Richardson is relied upon to guard the net.

“We can depend on Molly to block or put the ball down,” Coach Allder said.

With Richardson in the front row, Miranda plays back row, and helps set when the pass isn’t on target.

“Olivia has a really great back row attack,” said Coach Allder. “It’s hard for most teams to defend and she is very consistent with it.”

In the team’s five set victory over Times 2, The Tigers had dug themselves a hole going down 2-1 in the first three games, playing with junior outside hitter Emily Oakes, one of the team’s stronger defenders.

Coach Allder rallied the team with a spirited speech before game four.

“We talked about being a team and having a ‘We can do it attitude,’”said Coach Allder. “I reminded them to let their own personal mistake go and to play with positive thoughts. Believe we can do it.”

The girls grew louder on the court and had better body language, Coach Allder said. “The team began to play with heart.”

The Tigers won the fourth game 25-15 and went into the tie breaker with a winning attitude, said Coach Allder. “Both teams fought hard to the end, but we ended the night with the win.”

New setter, Gabby Piscani is improving every game, said Coach Allder. “Gabby puts one hundred percent towards her focus of getting better in her skills and decision making,” Coach Allder said.

Junior Kaylie Cabral doesn’t always show up on the stat sheet, but always catches the eye of Coach Allder. “Kaylie is a good defender and is the quickest hustler out there,” said Coach Allder. “She gives her all to get a finger on the ball and never quits.”

Coach Allder sees PCD as the team’s biggest threat in the playoffs. The Knights are 7-1 and beat the Tigers earlier in the season.

Woonsocket is another team that could stand in the Tiger’s way. The two teams meet Friday, April 16, at Woonsocket.

“Our main focus will be working on our defense and placing the ball when on offense,” Coach Allder said.