Bristol parade roars back to life

With the crack of musket fire, the rumble of big rigs and the roar of an appreciative crowd, the Bristol Fourth of July Parade returned to form on Monday, a year after the pandemic altered everything …

Bristol parade roars back to life 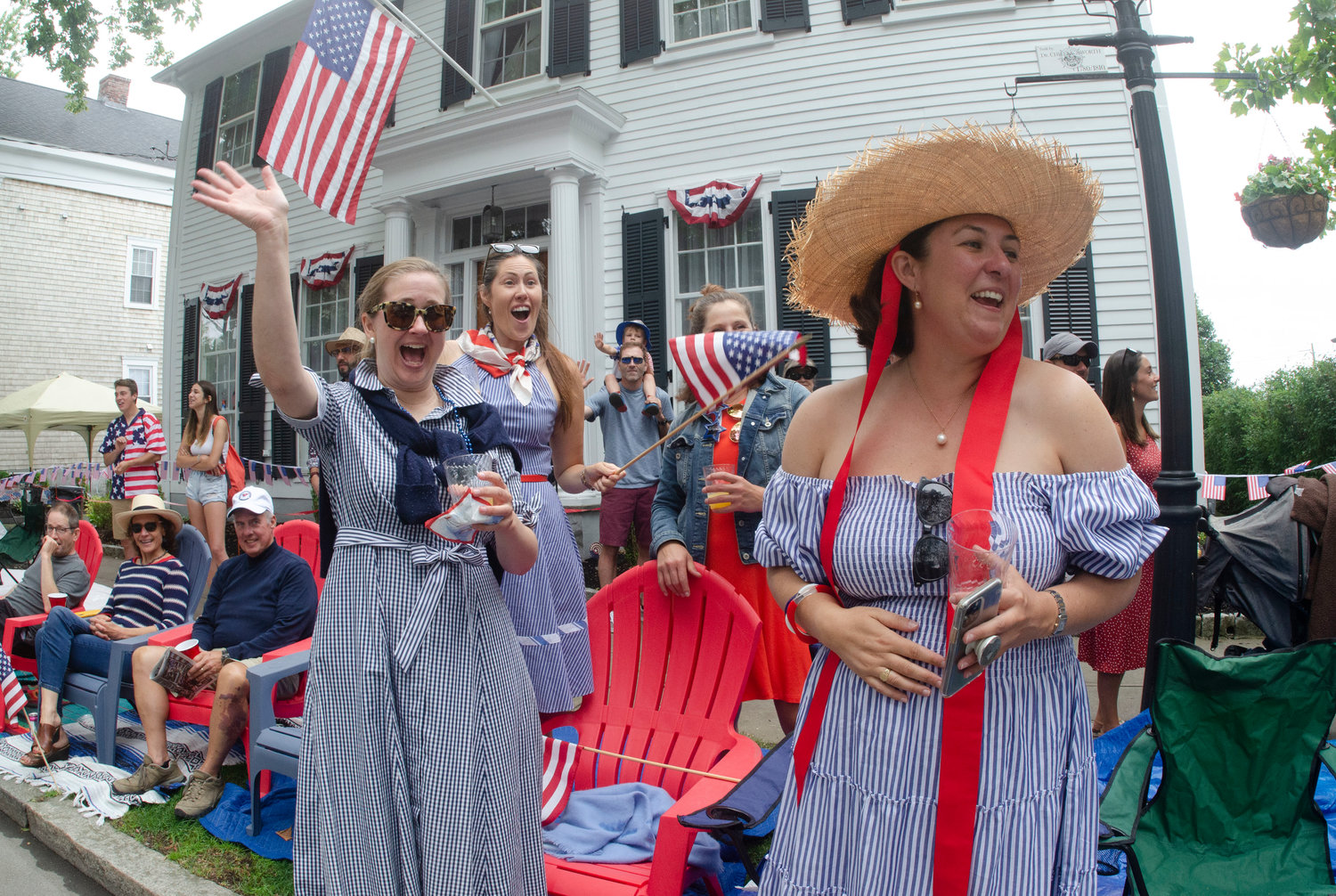 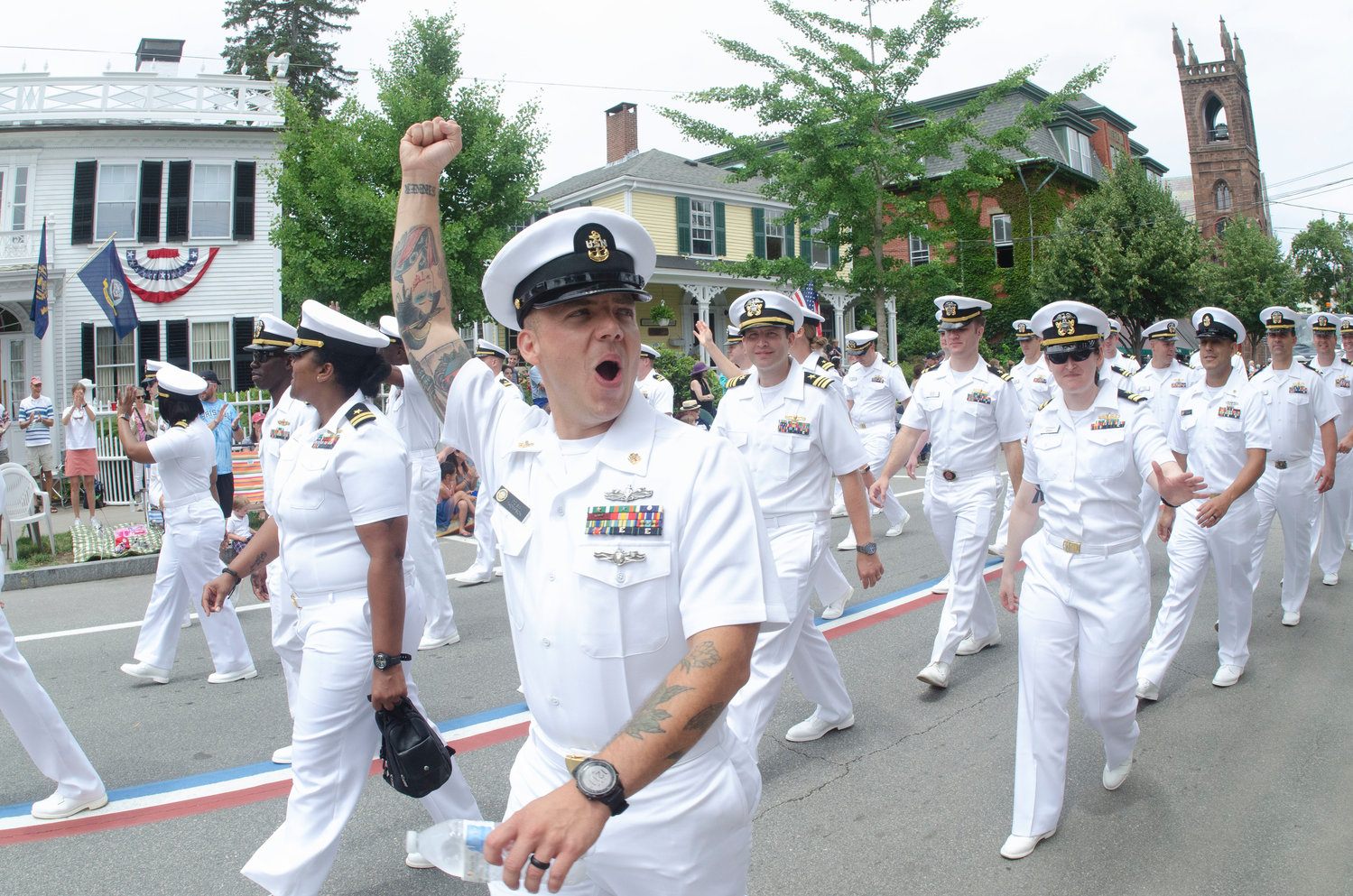 A unit of Naval officers acknowledge the crowd along Hope Street during the 2021 Bristol Fourth of July Parade
Photos by Richard W. Dionne Jr. 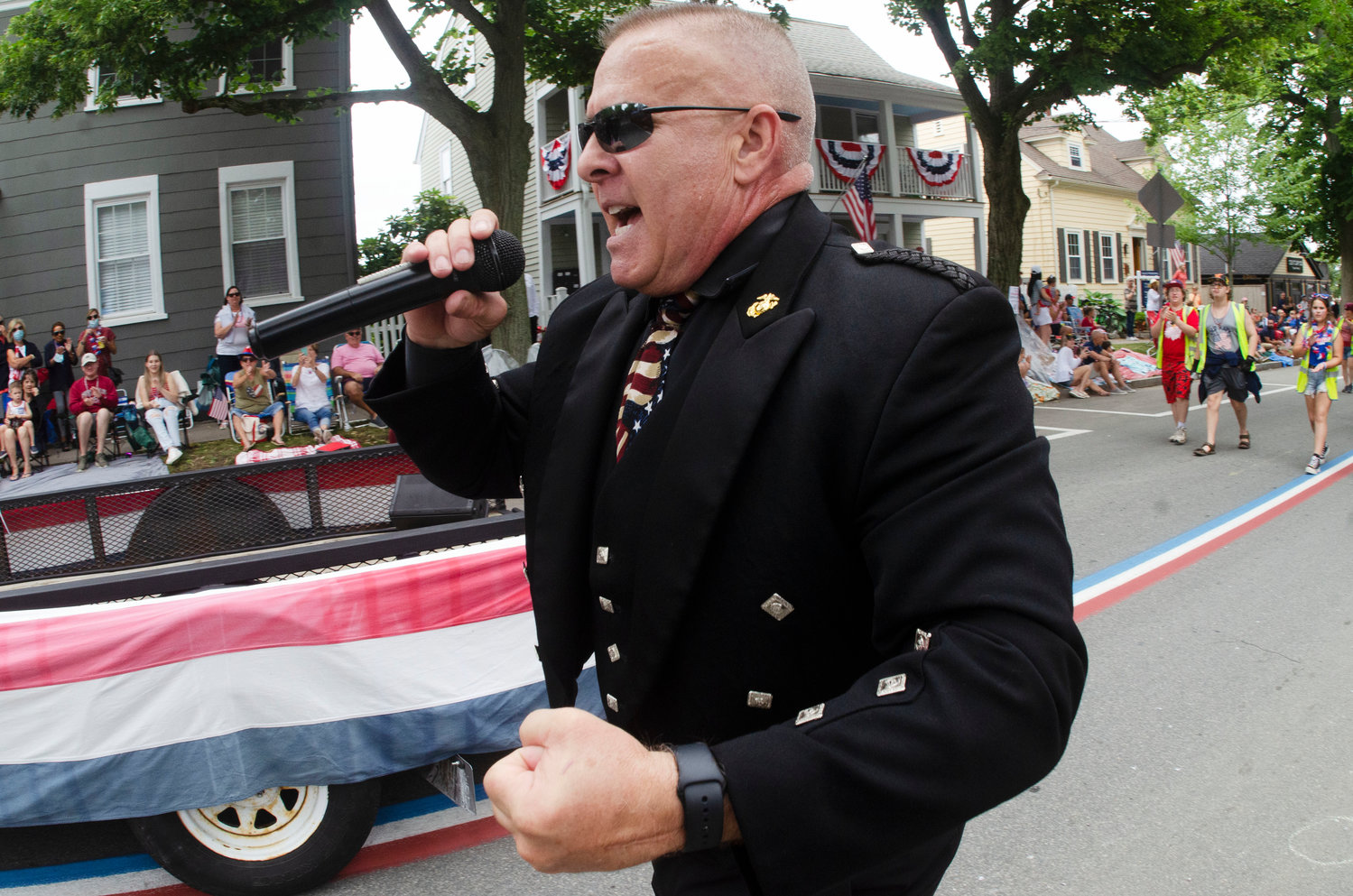 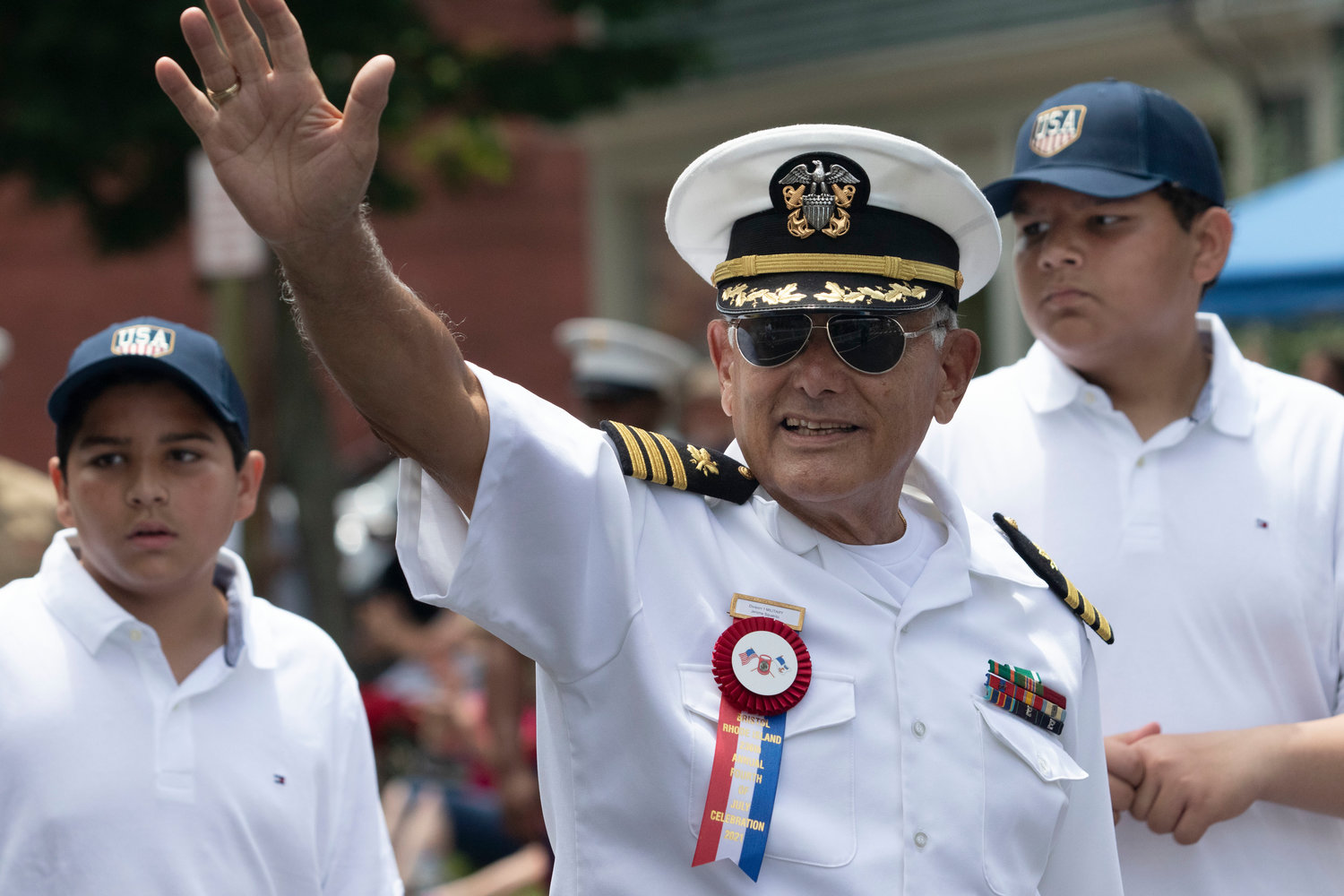 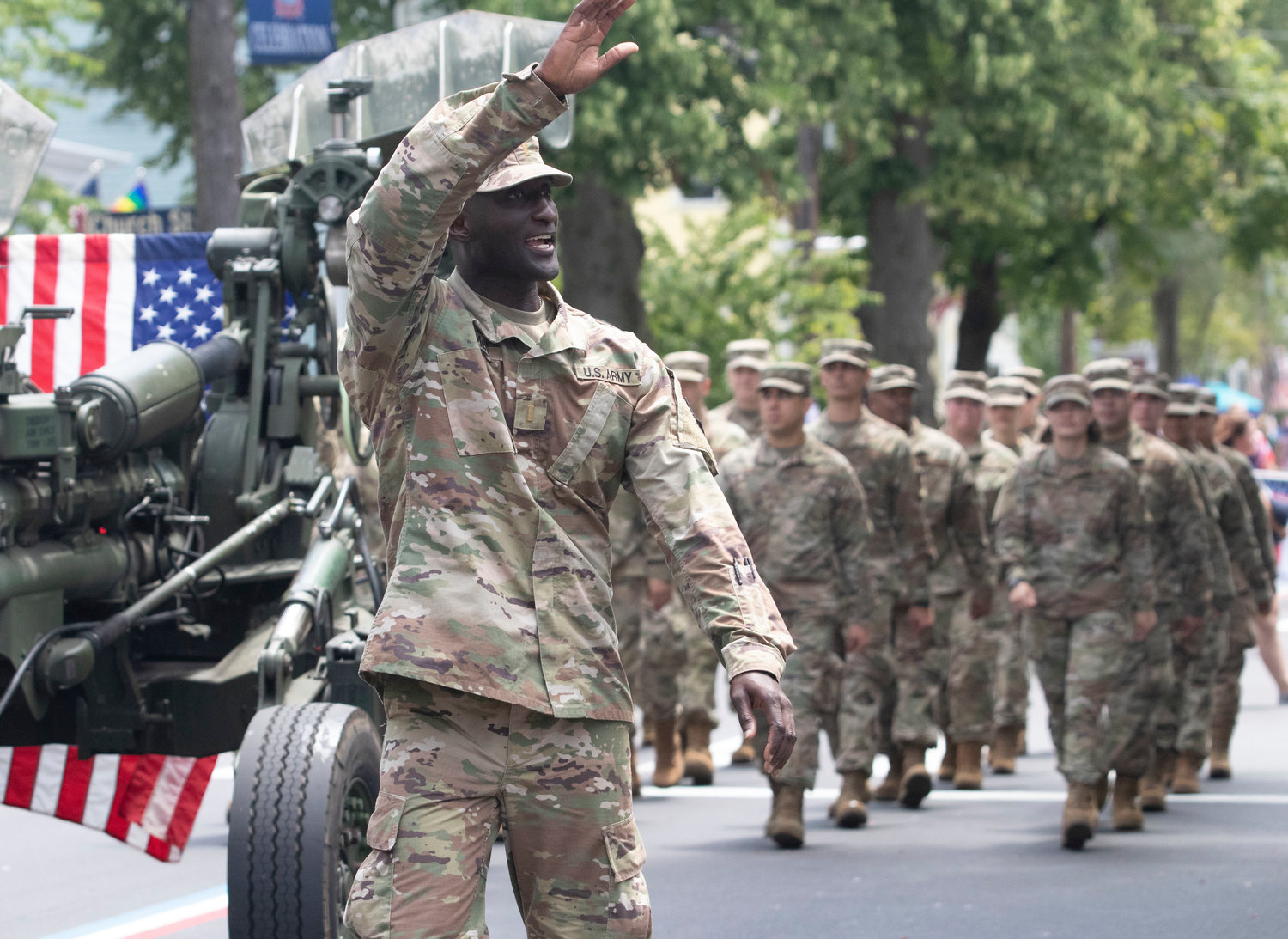 A unit of the U.S. Army marches the route.
Photos by Richard W. Dionne Jr. 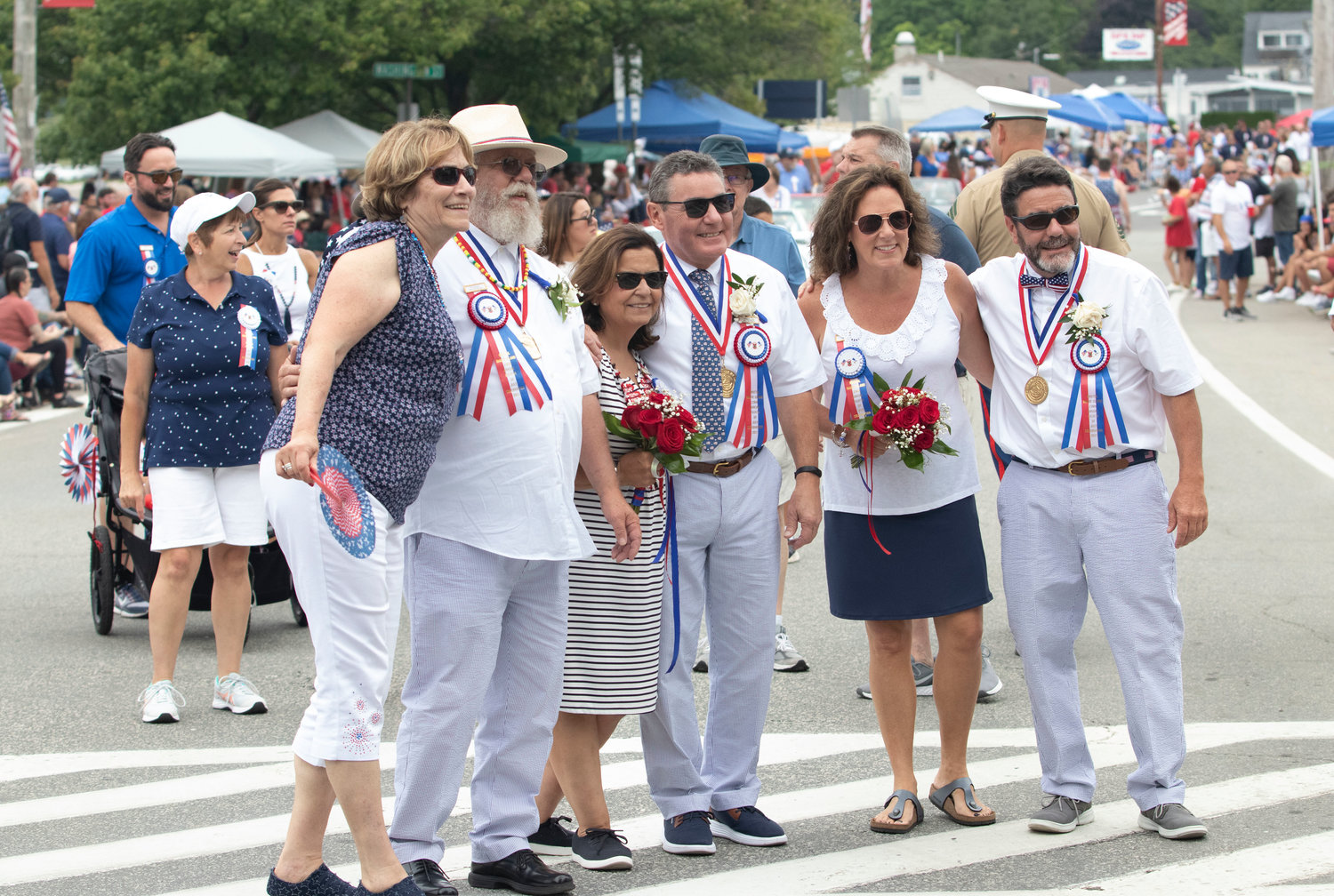 The chief marshals, Ken, Michael and Steve Januario, and family pose for a photo.
Photos by Richard W. Dionne Jr. 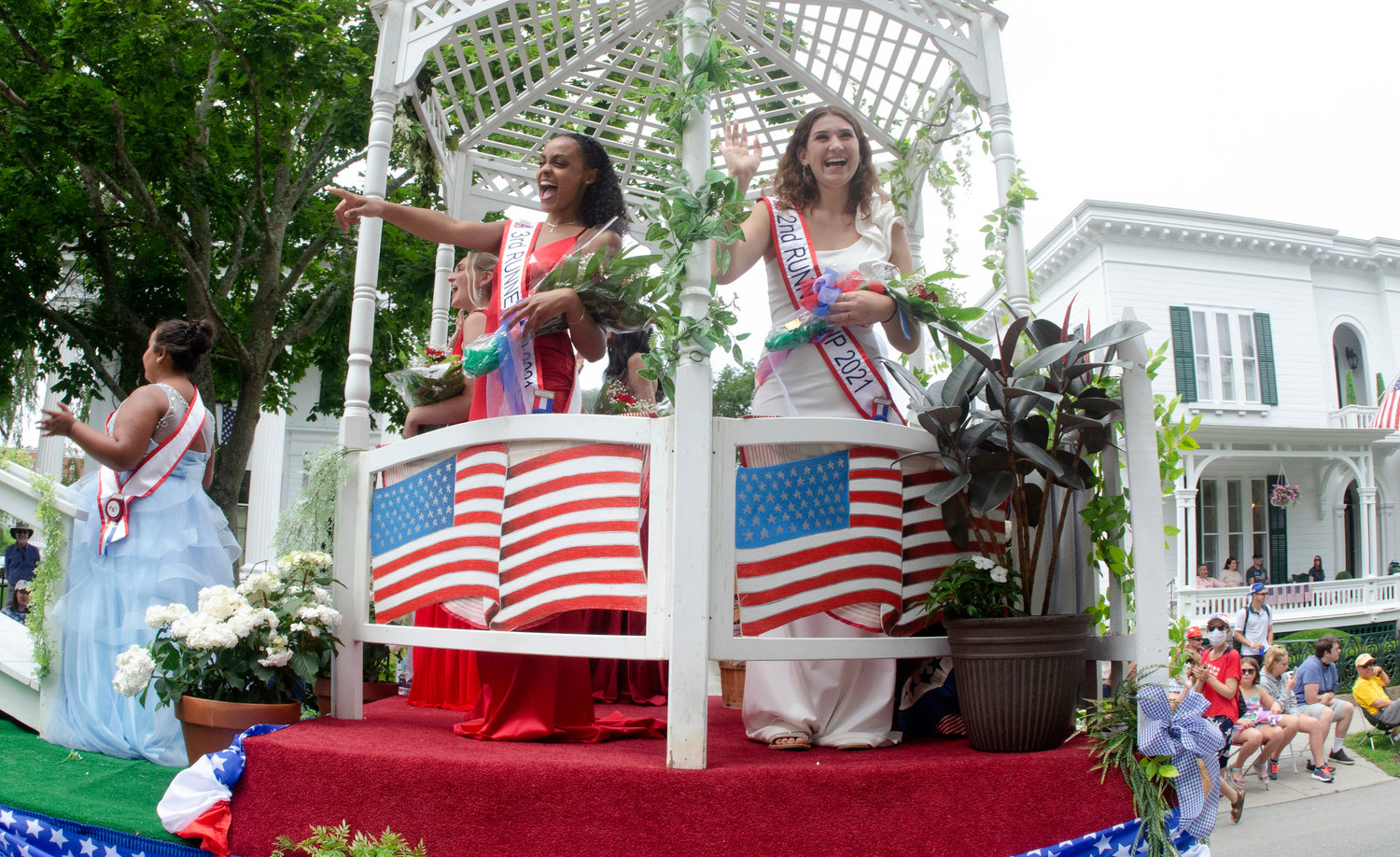 Having a ball atop the Miss Fourth float are Emily Almonte (left) and Samantha Martins.
Photos by Richard W. Dionne Jr. 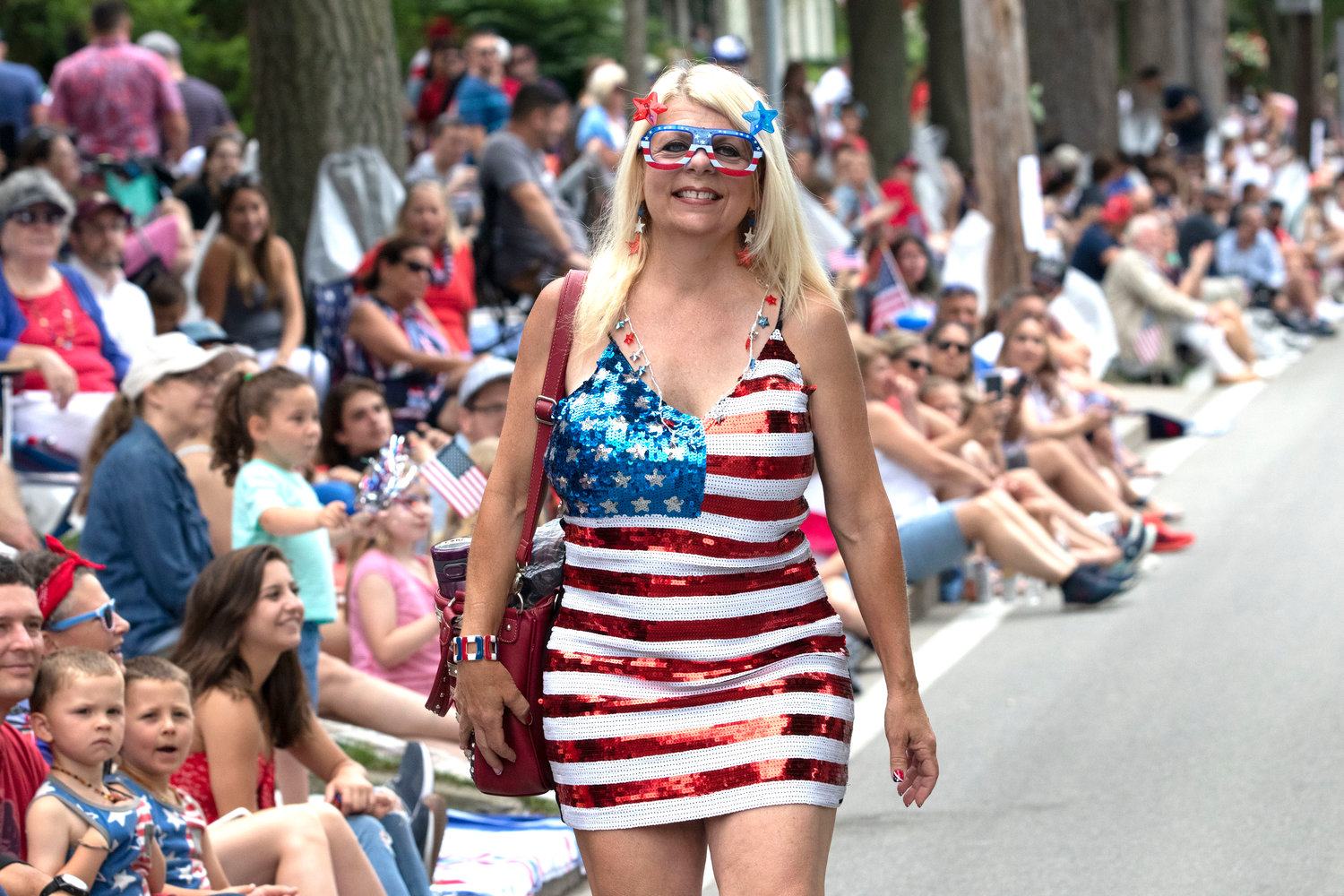 One of the fancier Fourth outfits.
Photos by Richard W. Dionne Jr. 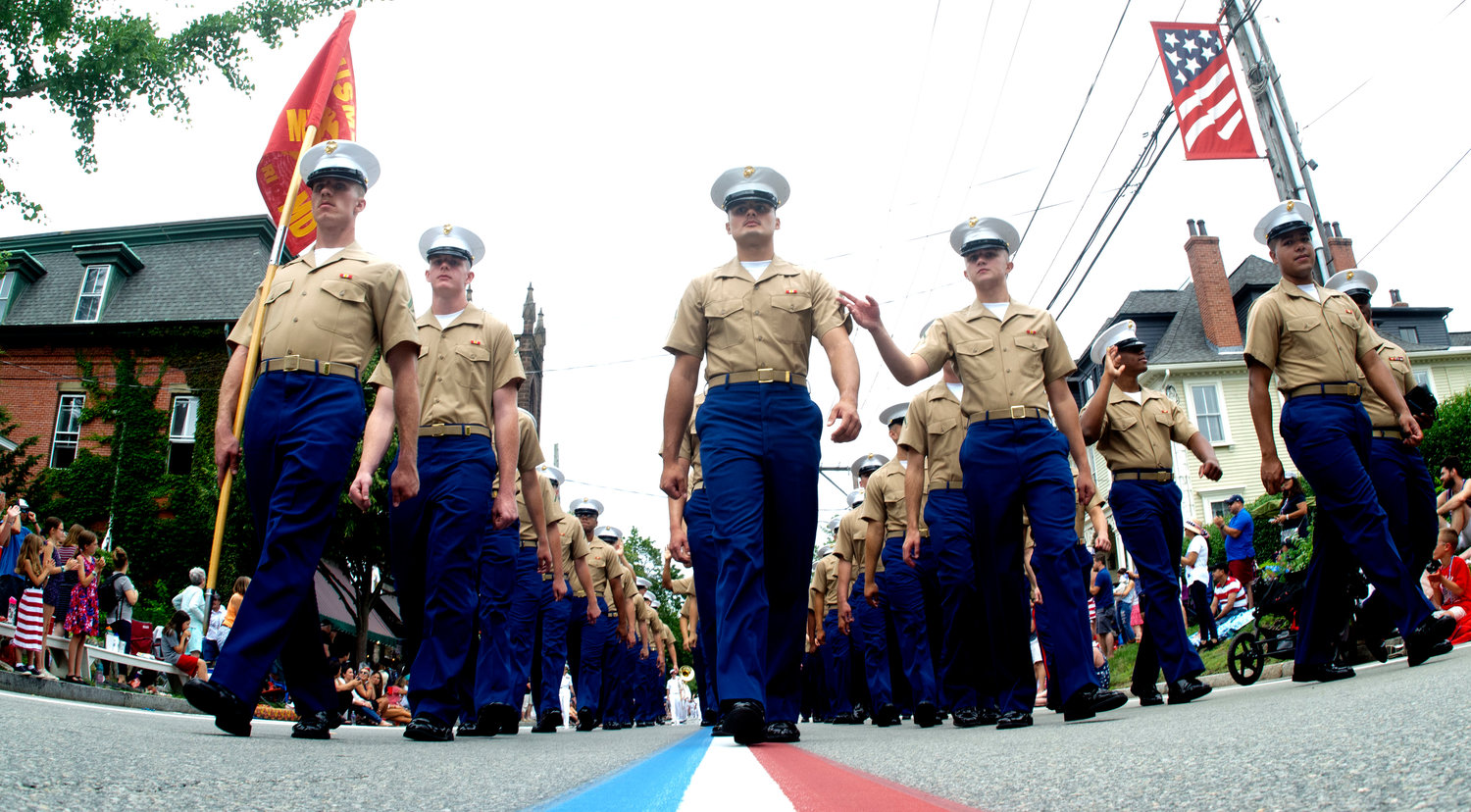 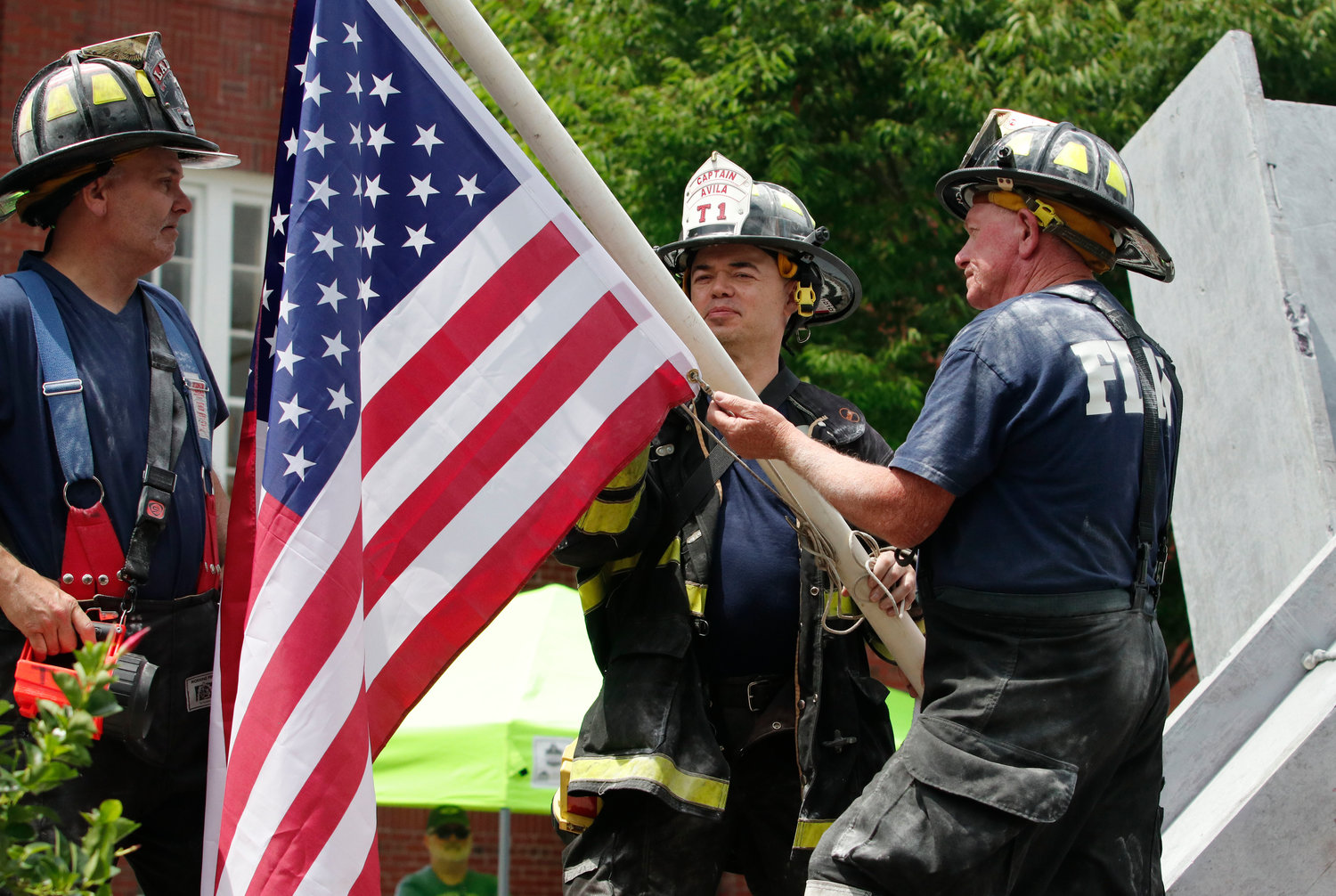 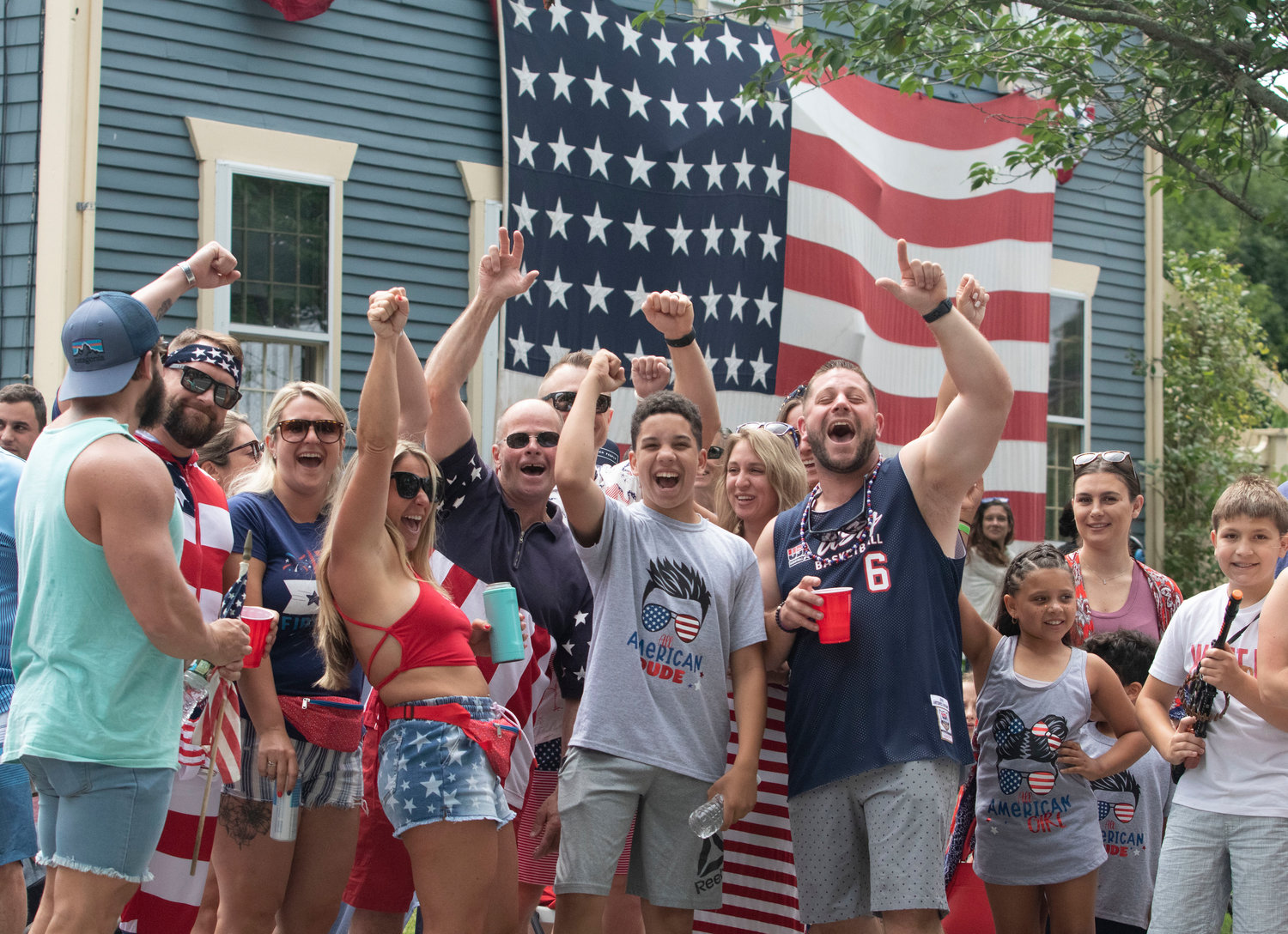 Daniel Coffland (right) and friends cheer during the parade, in front of his house on Hope Street.
Photos by Richard W. Dionne Jr. 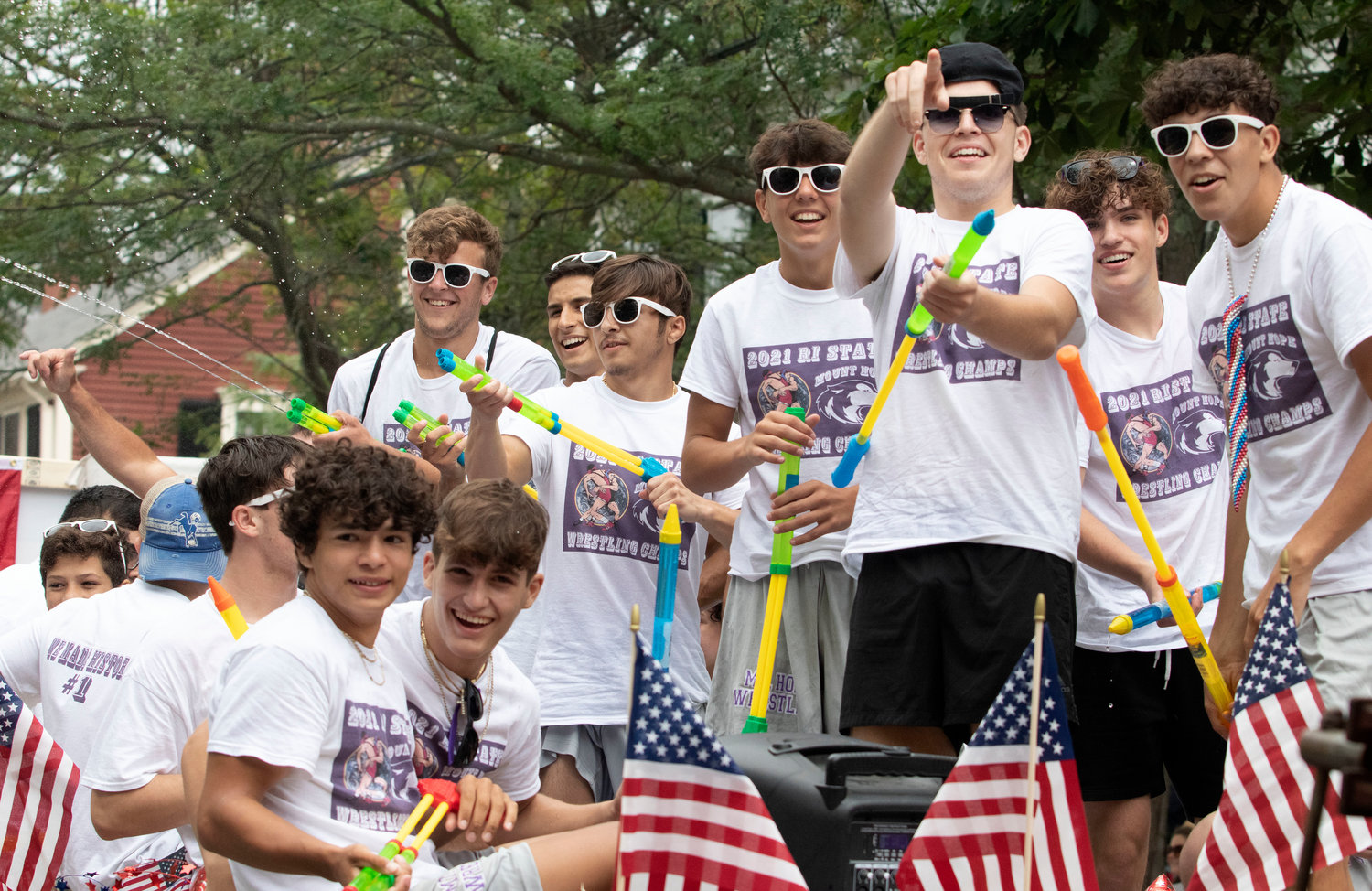 The Mt. Hope High School band, which began practicing in person just a few weeks ago, is a huge hit as it marches down Hope Street.
Photos by Richard W. Dionne Jr. Captain America, Brian Solitro, stopped in downtown Bristol to propose to his girlfriend, Maura Turner. The newlyweds pause for a moment before a cheering crowd after she accepted his proposal.
Photos by Richard W. Dionne Jr. The Singing Trooper, Daniel Clark, leads the crowd in the National Anthem at the opening ceremony for the 2021 Bristol Fourth of July Parade, just before the procession stepped off from the intersection of Hope and Chestnut streets. The enormous flag was carried down the two-and-a-half-mile route by Scout troops.
Photos by Richard W. Dionne Jr.
Previous Next
Posted Wednesday, July 7, 2021 6:00 pm
By Scott Pickering

With the crack of musket fire, the rumble of big rigs and the roar of an appreciative crowd, the Bristol Fourth of July Parade returned to form on Monday, a year after the pandemic altered everything about the town’s grandest celebration.

Staged Monday, July 5, because the town traditionally moves the parade back one day if the holiday falls on a Sunday, the 2021 version was much like parades of the recent past. It followed the familiar two-and-a-half-mile route from the top of Chestnut Street to the reviewing stand in front of the Town Common on High Street.

It featured a long line of floats, marching military units, local and larger celebrities, war veterans, historic militia and a bevvy of entertainers. Though reports vary — some say the crowd might have been smaller than pre-Covid years, others say it was thick as ever — spectators returned by the tens of thousands. They lined the route on both sides, camped in ideal weather conditions, with mild summer temperatures in the low-70s, a gentle breeze and partly sunny skies.

On Tuesday morning, reached after a long night of sleep following weeks of exhausting planning and management, Parade Chairman Charles “Chuck” MacDonough said reviews of the 2021 procession have been positive.

“It seemed like everyone was having a good time, people were smiling. I think it all went well,” he said.

Of course, it didn’t all go exactly as planned. It never does. Behind the scenes, organizers at the staging typically juggle and react to conditions as they unfold. “You always have to deal with the mishaps,” he said. “Floats showing up late, groups that aren’t ready, stuff like that … You just send off what you have in front of you.”

He praised his committee for reacting to the moment and keeping things moving. “Everybody worked through any small problems,” he said. “The committee worked very hard this year. I hope everyone enjoyed it.”

Mr. MacDonough had some of his own parade favorites, which matched with crowd reactions along the route. He said the brigade of firefighters honoring the 20-year anniversary of Sept. 11 was “amazing.”

He also praised Dr. Nicole Alexander-Scott, Rhode Island health director, who was marshal of the Heroes Division. Dr. Scott, holding her young son on her hip and walking along with a large contingent of health department and state employees, received a standing ovation from many spectators as they passed down the route.

Another crowd favorite was celebrity Judge Frank Caprio, star of “Caught in Providence” and Emmy nominee, who walked the route — as much as possible, since he was stopped every few feet by someone running out to take a selfie with him.

Overall, Mr. MacDonough is happy with the final result and believes spectators were as well. “I think it was a good crowd, an enthusiastic crowd, they were very respectable,” he said.

Noticeably missing from this year’s parade were the numerous drum corps and marching bands that typically provide the drumbeat for the day. Because most of them were unable to even practice until Covid restrictions eased recently, none were ready to march this year. Mr. MacDonough said they will begin conversations to lock up a more “normal” contingent of marching bands next year. For now, he’s happy with what they accomplished this year.