The community that dines together …

LITTLE COMPTON — Lugging picnic baskets and coolers, a crowd of over 500 — babies to age 100, arrived at Little Compton’s Commons at the close of a perfect late-summer Sunday. The previous …

The community that dines together … 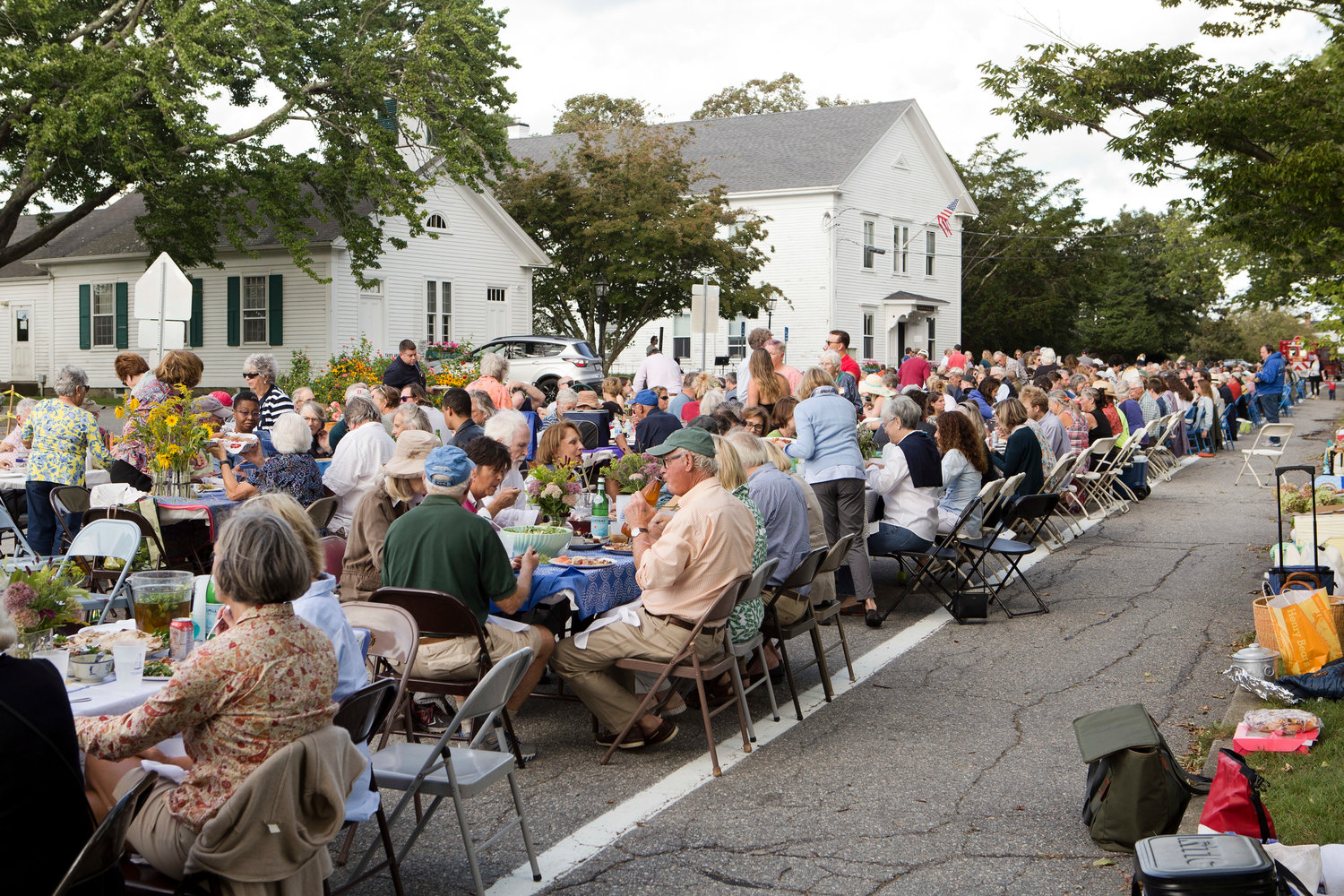 Seated at long rows of tables stretching in front of Town Hall, some of the 530 diners at Sunday evening’s Little Compton Community Dinner start their meals.
Julie Furtado photos 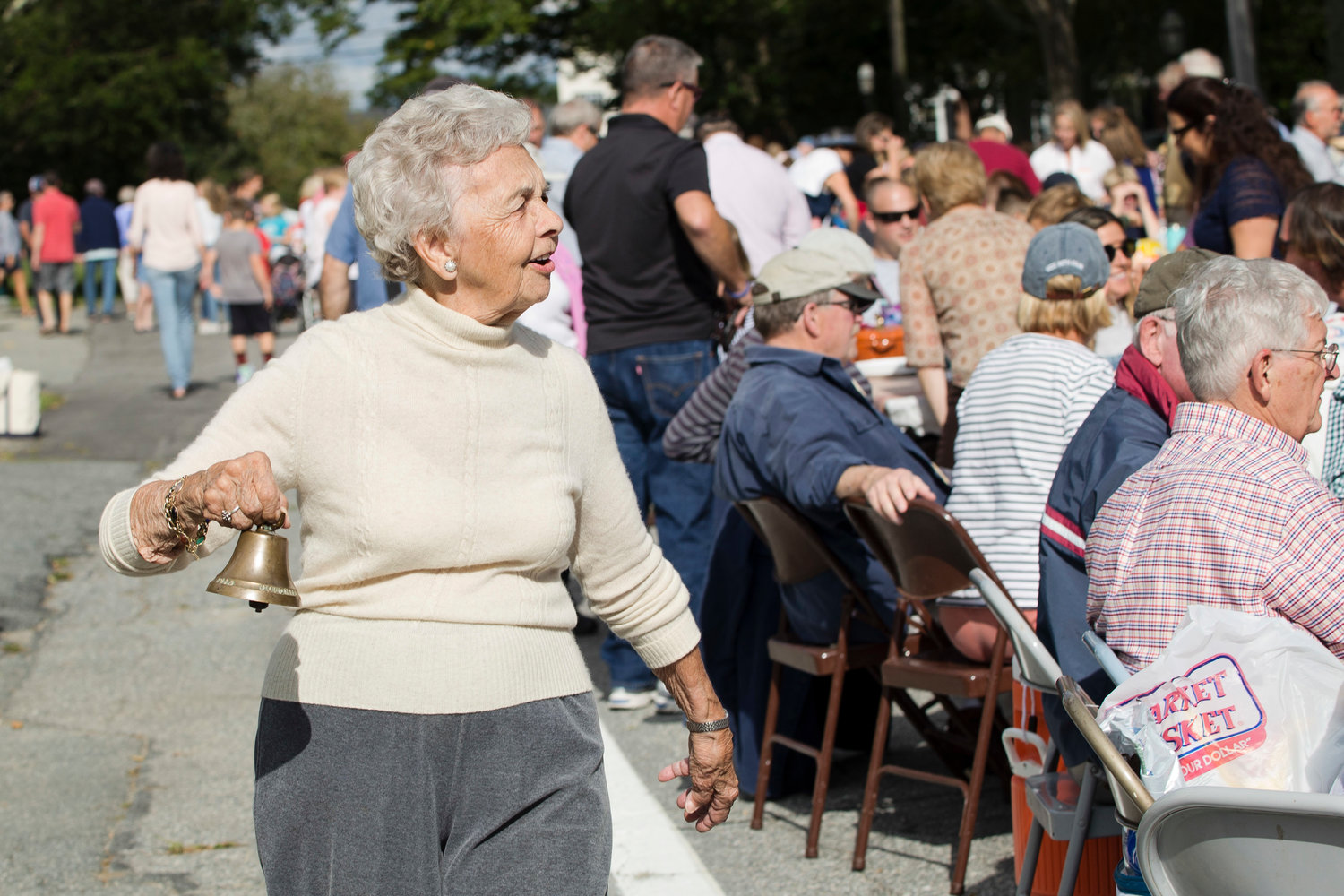 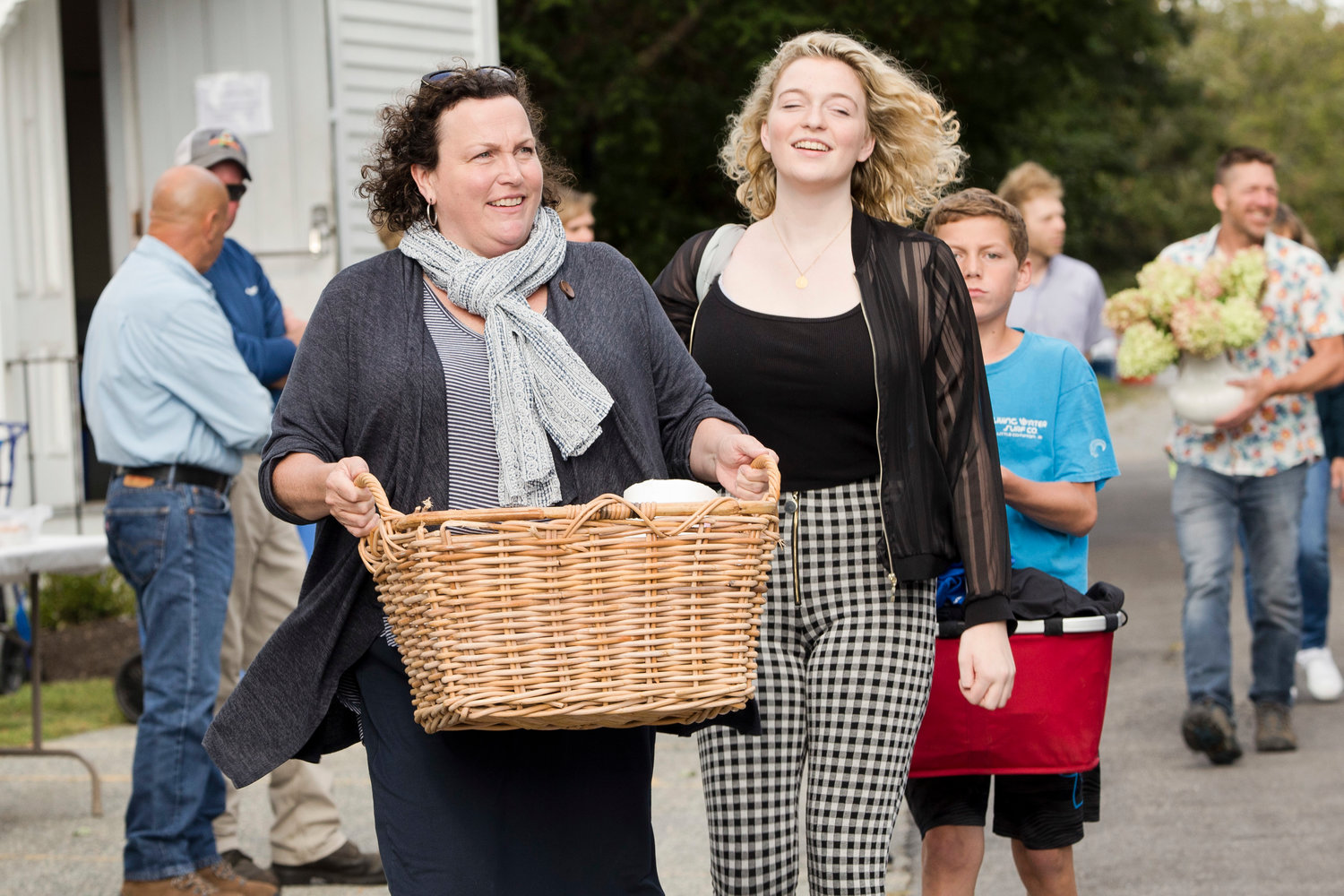 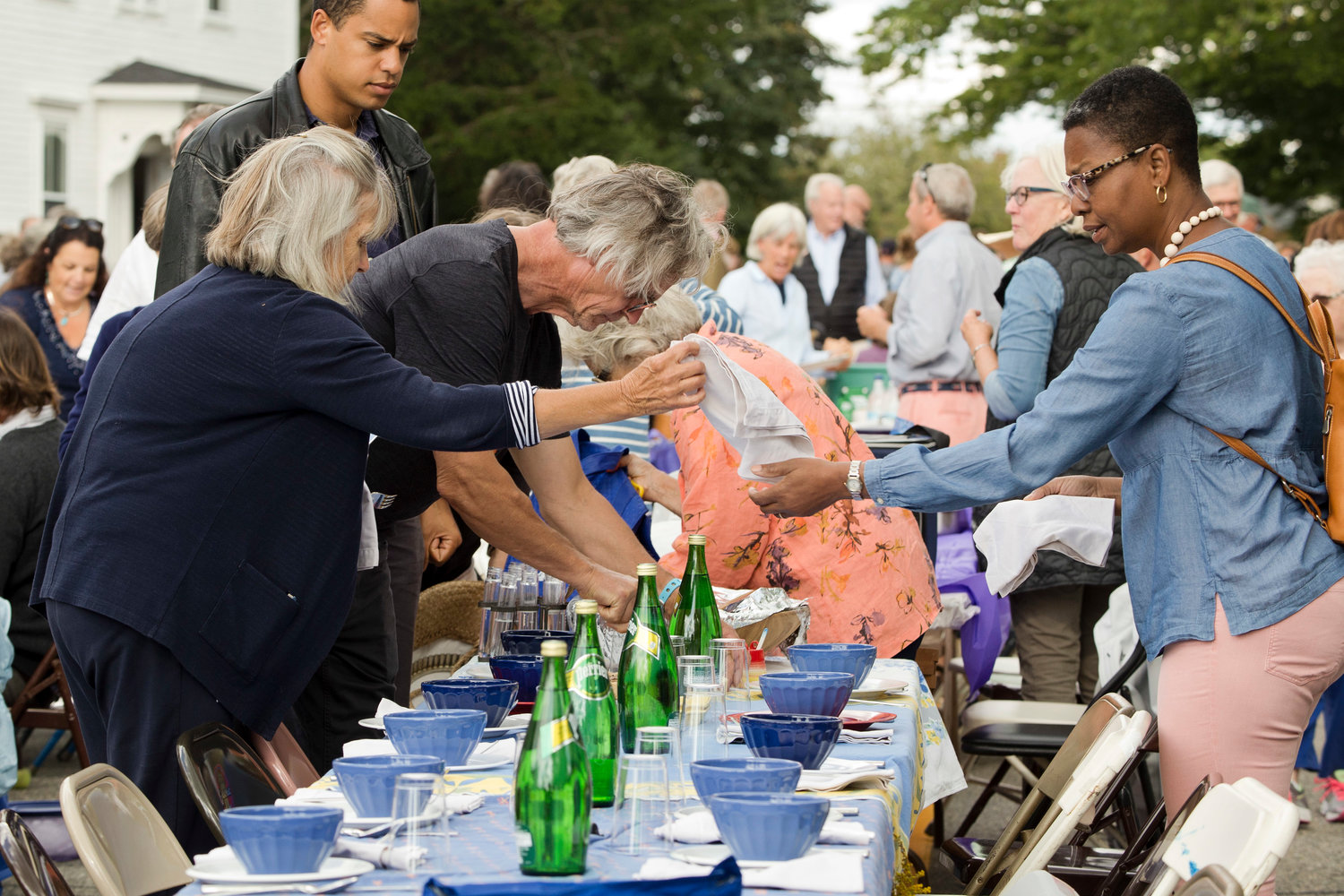 Janet Jagger (left) hands a napkin to Toyin Shonukan as they set their table. 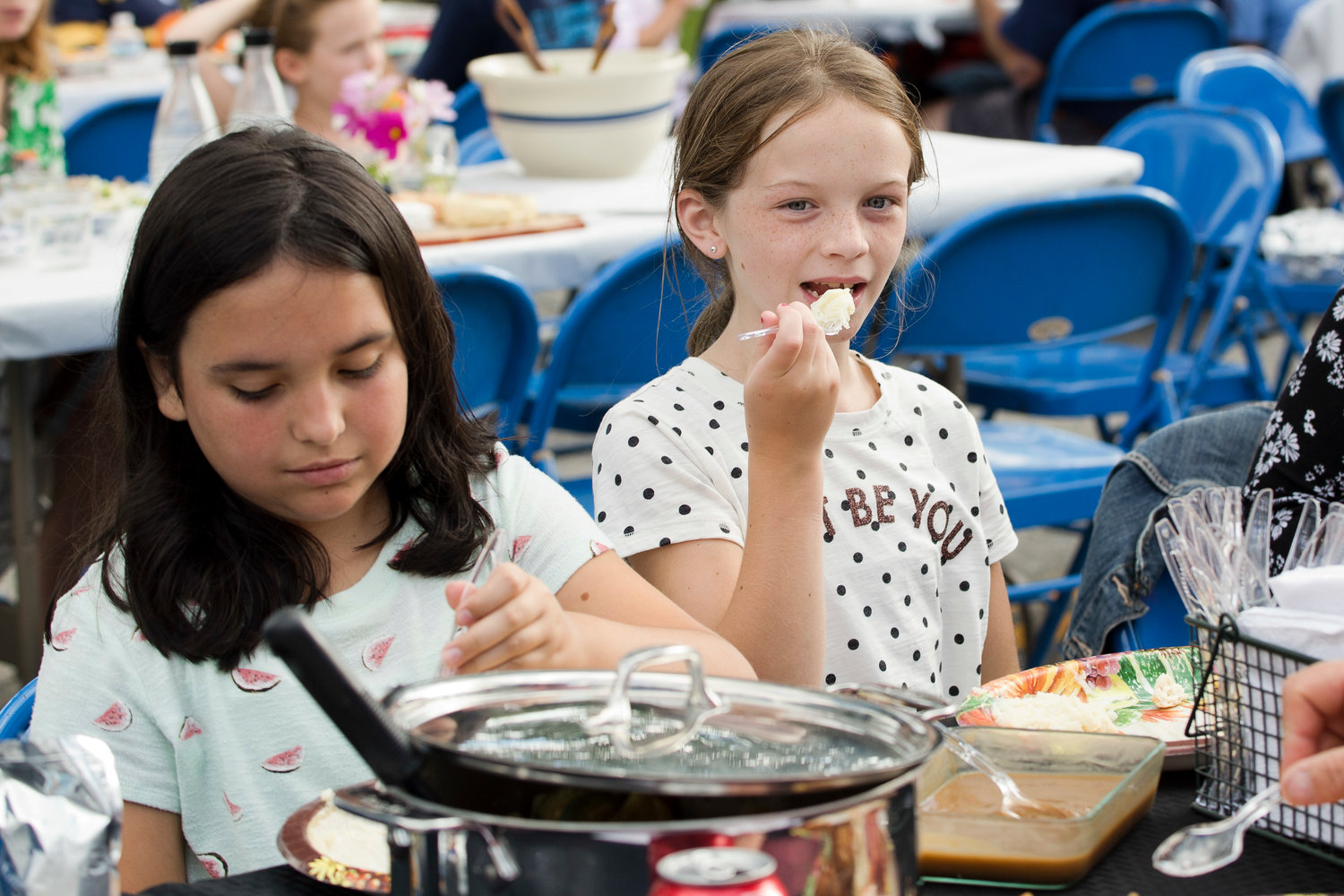 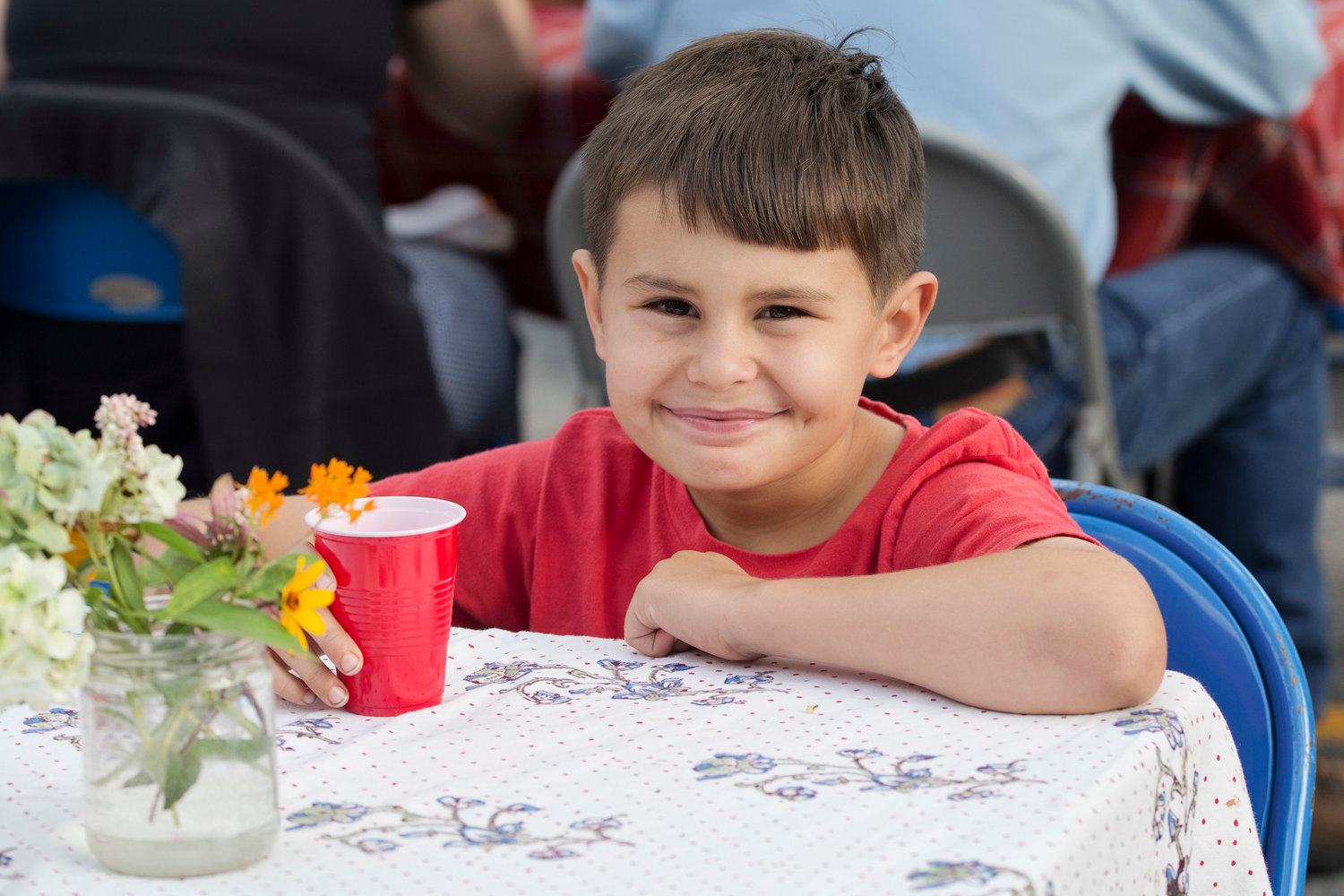 Tommy Sullivan offers a smile while waiting for the dinner bell to ring. 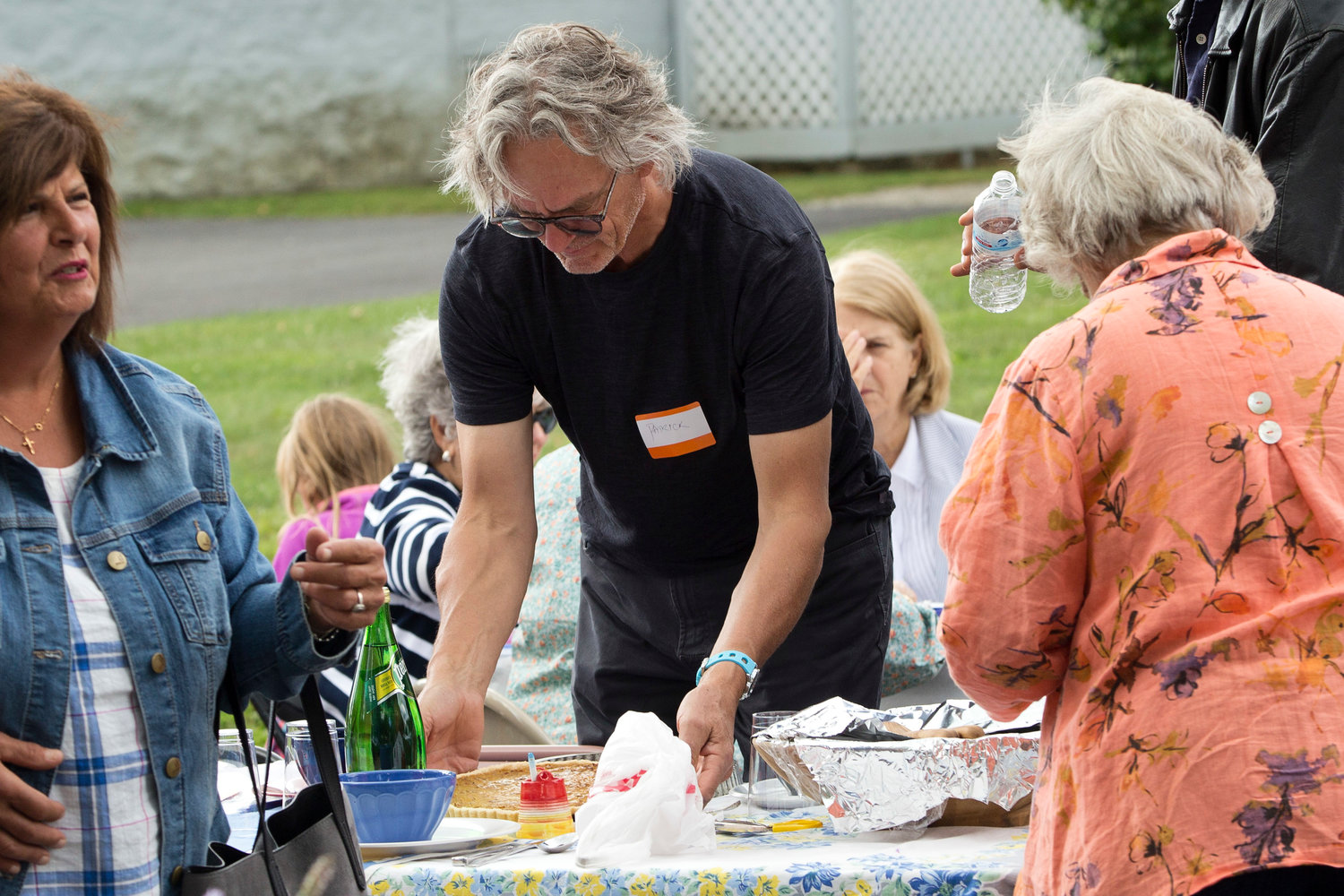 Patrick Haslett sets a pie on a table. 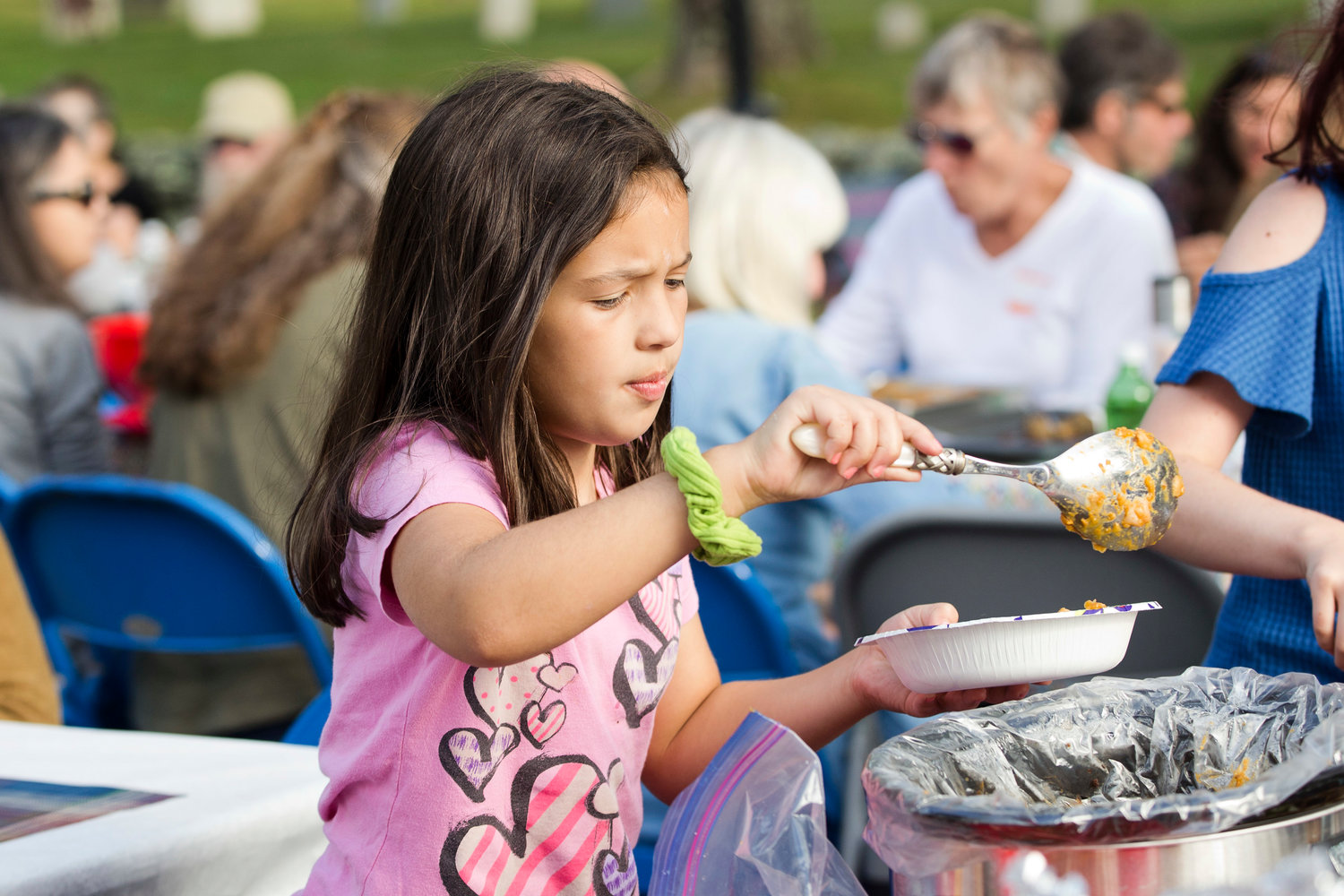 Julie Moniz serves herself while dining with friends and family
Previous Next
Posted Thursday, September 12, 2019 6:09 am
By Bruce Burdett

LITTLE COMPTON — Lugging picnic baskets and coolers, a crowd of over 500 — babies to age 100, arrived at Little Compton’s Commons at the close of a perfect late-summer Sunday. The previous day’s Hurricane Dorian’s wind and showers were long gone to the northeast.

Triple rows of tables stretched far down the closed-to-traffic road in front of Town Hall, each soon covered with the diners’ table cloth and centerpiece of choice. All sorts of colorful backyard flowers were on display.

The menu, too, was a matter of choice, coordinated (some more than others) by the table’s “host” — and mostly stayed simple — chicken, burgers, ham, lots of salads, hors d’ouvres …

Desserts were shared with all — each table brought something to put on the dessert table for anyone to sample. And like last year, there was plenty left over. Diners were urged to take some home and the rest was given away — police and firefighters were among the beneficiaries.

Tables and chairs were all hauled out from town buildings, the school and church. Cutlery, napkins, beverages (non-alcoholic) and the rest were each table’s task — carts were available to help carry it all.

Apparently word had gotten around from the 267 diners at last year’s debut Community Dinner that this is something special. Official count in this second edition was 530. That’s roughly 15 percent of the town’s population.

The first year, “I thought I’d be happy if we got 100,” said organizer Barbara Passmore.

At 4 p.m., Ms. Passmore rang the dinner bell, signaling that eating could commence.

There were no speeches, no grace — individual tables could say grace if they chose.

“We didn’t want it to be political or religious, we just want people to be themselves and don’t want anyone to feel left out.” She added that she just welcomed everyone on a beautiful day, hoped all enjoyed themselves — “Time to eat.”

Mealtime was accompanied by karaoke — some diners got up and sang along.

Ms. Passmore said it was amazing to watch it all and said credit is due to the committee and volunteers who “did everything to make this happen.”

She said she thinks the event fills a real need at a time that “I feel people are so wanting to be with others.”

“It just radiated so much joy,” she said. “It was so beautiful to see so many people coming together, sharing community strength.”