The Bristol Warren Regional School Committee voted 5-4 to reject the expenditure of $7,000 in grant funding for a project-based learning initiative. 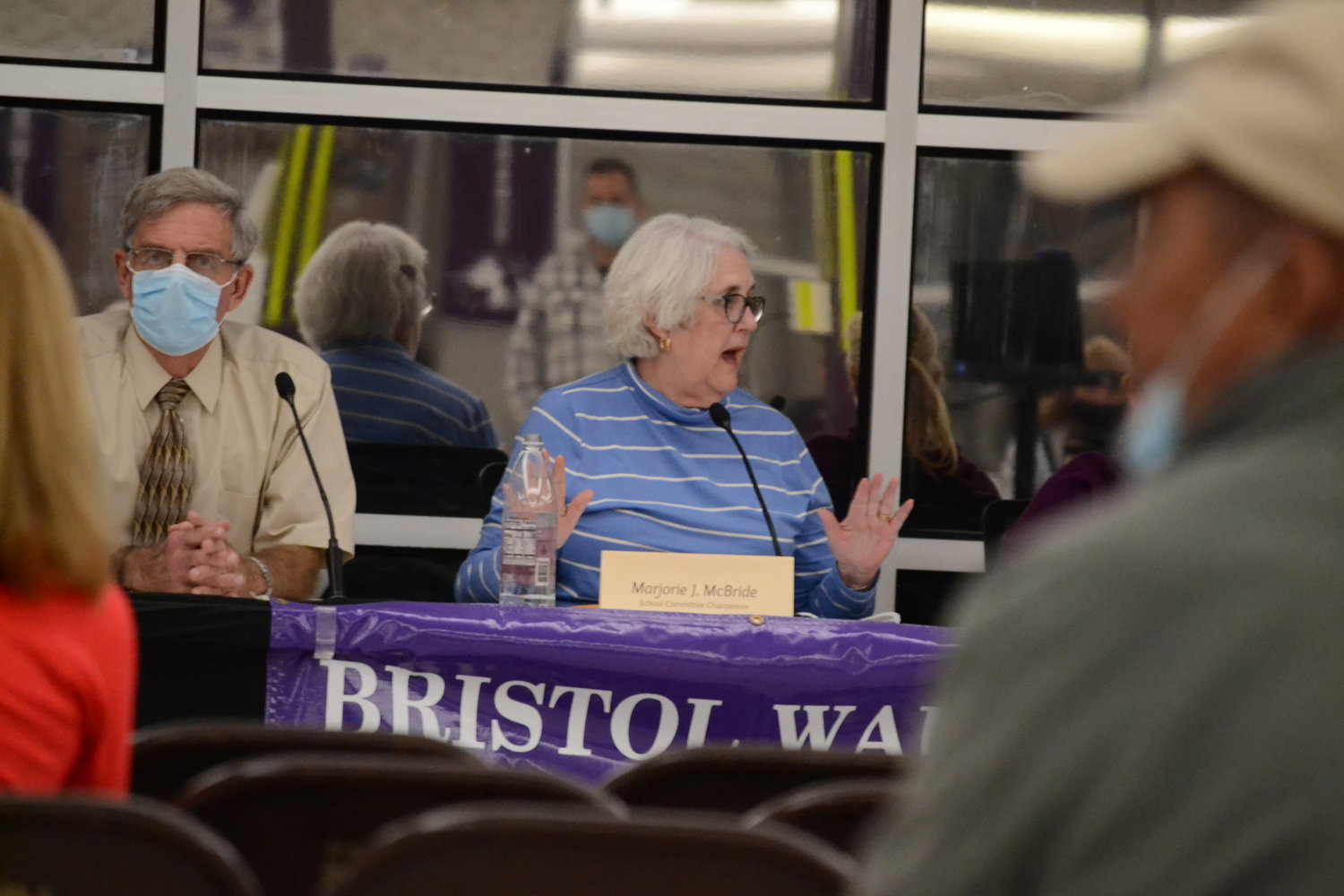 School Committee Chairperson Marjorie McBride shouts for order in the room after questioning of the proposed vendor for professional development in the district descended into chaos Monday night. She would vote to deny the $7,000 expenditure shortly after.
Ethan Hartley 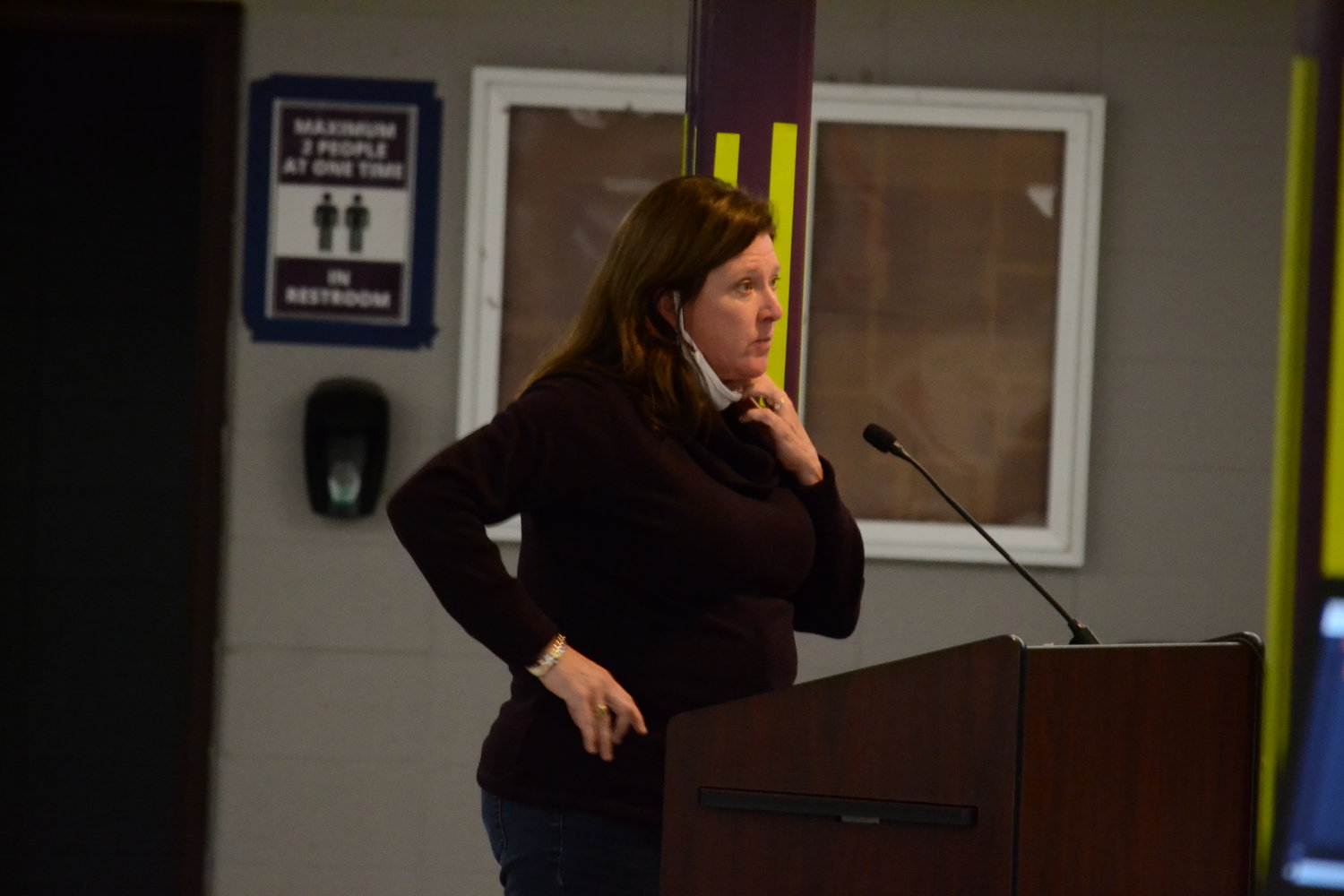 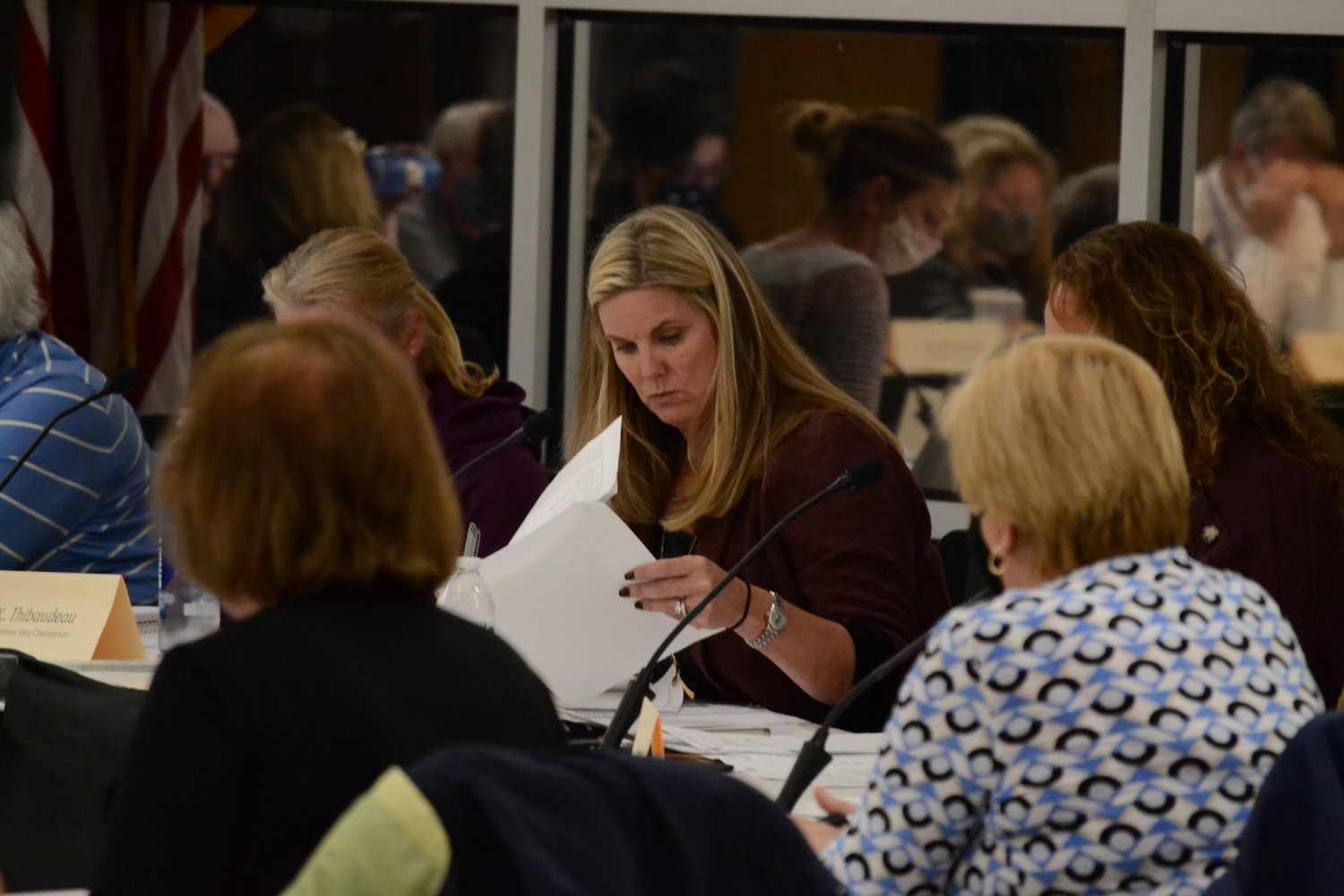 On Monday night during their regular business meeting, the Bristol Warren School Committee voted 5-4 to deny the expenditure of $7,000 in grant money, which was brought forth by Mt. Hope Principal Deb DiBiase in collaboration with the Bristol Warren Education Foundation (BWEF), to initiate professional development in support of a project-based learning opportunity within the schools.

The decision came immediately following an impromptu, 10-minute recess that was ordered by School Committee Chairperson Marjorie McBride after the room devolved from back-and-forth questioning of district administrators into a cacophony of yelling back and forth between school committee members, DiBiase and some members of the public.

At the crux of the disagreement was a $7,000 stipend that would go towards a consultant, selected by DiBiase, to conduct 10 days of professional development and prepare teachers at the high school to design the project-based learning program.

Project-based learning is a dynamic method of teaching that emphasizes critical thinking skills and achieving a more comphrensive understanding of topics through the assessment of real-world problems and solutions.

The denied expenditure was included as part of a larger grant originally acquired in 2019 from the XQ Institute in the amount of $20,000, which was matched in 2020 by an anonymous donor, facilitated through the education foundation.

The proposed consultant to lead professional development for the program, Simona Simpson-Thomas, is the founder and CEO of Freedom Dreams, which according to their website is “an organization committed to realizing the dream of freedom by building intentional, innovative and sustainable systems designed to empower Black and Brown excellence.”

“We believe that education is a tool to liberation; as such, students need to be held to high expectations and taught the skills to navigate and achieve at their highest potential,” reads the “Our Approach” section of the Freedom Dreams website, which lists five steps to achieve this goal that include emphasizing the importance of Black and Brown students, families and communities over the needs of any one individual; bringing marginalized voices to the table; and identifying ways to “dismantle inequities that exist within the system and individual schools.”

School Committee Vice Chairperson Tara Thibaudeau, who along with Committee Treasurer and Finance Chair Sheila Ellsworth voted to not endorse the grant expenditure during last week’s finance subcommittee meeting, stated that she had multiple issues with the contract, but particularly with the chosen vendor.

“I am all about getting these kids real-life jobs, but the more I looked into this, the more I felt less comfortable with this particular vendor,” she said. “We are not denying this donor, or the XQ grant, we are just questioning the vendor…When I reviewed and looked up that person and her company, I didn’t feel that that was a fit for our district. I didn’t feel that that was the vision of our district.”

Ellsworth concurred with this sentiment.

“My concern is more that, are we making sure that every child within our district, regardless of race or color or religion, is treated the same and fairly?” she said, after informing the room that she had looked up information about Freedom Dreams and Simpson-Thomas online. Ellsworth then read aloud the mission of Freedom Dreams.

“I agree with all of that, but I also agree with every other child that we have in this district,” she said. “My concern is, are we just focusing the [project-based learning] and those teachers to just help that group of children, or are we helping every child, every group that’s coming through the door? Regardless of color, or religion or what they believe in, I think every child deserves an opportunity.”

DiBiase, angered by the comment, shouted back from her seat in the audience.

It was at this point that the room spun into chaos and McBride shut the meeting down for a 10-minute recess. The vote was taken upon resumption, with McBride, Thibaudeau, Ellsworth, Victor Cabral, and Karen Cabral voting in opposition to the expenditure.

Questions about the grant process

Before the room erupted into heated argument, the discussion had first focused around a line of questioning beginning with the grant’s funding mechanism.

This included whether or not the XQ money had already been fully spent — a point that DiBiase and the district’s Chief Financial Officer, Tony Ferrucci, had conflicting information about. DiBiase said that the XQ money had already been fully spent, while Ferrucci said his invoices showed there was $11,000 left from that grant as of Monday afternoon. On Wednesday morning Dr. Dianne Sanna, Bristol Warren's assistant superintendent, confirmed there was $7,400 remaining in the grant funds, which could expire this year if an extension is not granted by the XQ Institute.

The $20,000 match from an anonymous donor, which was facilitated through the BWEF, became the subject of more questioning from McBride, Thibaudeau, and Ellsworth.

“When we get a grant at that size, we vote as a school committee to accept the grant and then we decide where the grant goes and how much money is going in and going out. We didn’t have that opportunity,” said McBride. “And now they want another $7,000 and I can’t vote on it, because I never voted on it to accept the donation in the first place. That is something we’ve been doing all year long, so it should be no surprise to anyone that when a donation comes into us, anonymous or otherwise, for anything, including scholarships, that the school committee has to accept the donation. The school committee has not accepted this donation … So for that reason and that reason alone, I’m voting no.”

Former chairperson Erin Schofield would later question the policy referred to by McBride, which requires school committee approval for grant-funded expenditures over $5,000.

Ferrucci agreed when asked by Schofield — responding to a question from Thibaudeau about whether or not the grant was put out to a bid in order to select their professional development consultant — that grant money used for hiring professional services, such as consultants, was not subject to bidding like normal expenditures, which must be put out to bid by state law.

Those in favor react

Members of the committee that voted in favor of the expenditure expressed their opinions regarding what was shaping up as a losing battle before the vote was taken.

“My concern here and my frustration is, at the end of the day the school committee seems willing to punish our students for a disagreement or a misunderstanding about how this money is distributed,” said Carly Reich. “I don’t understand why we have this need to refuse money and programming and other sorts of things that are caught up in some kind of conspiracy theory ideas about what’s going to happen in the school district. I’m just so frustrated that our students and our staff, in an effort to better our community and our schools, continually are punished by these wrongheaded ways.”

Committee member Nicky Piper advocated for the passage of the program because it would be a way to ensure that project-based learning could be implemented now and in years moving forward.

“I just think the decision was very disappointing for many reasons,” she said on Tuesday morning. “I think that we need to remember in the end our job is to provide excellent education opportunities for our children and put aside personal agendas.”

During the meeting, BWEF Chairperson Darcy DaCosta responded to some committee members questioning the nature of the $20,000 anonymous donor.

“It is really too bad that we are in times where this money has been sitting for almost four years now, we finally have a wonderful use for it, and instead of the hiring of a human being to execute the professional development training … it is now becoming an issue about our donation,” DaCosta said. “It’s really too bad. Because BWEF has donated over the last 20 years or so, well over half a million dollars to programs that have almost never suffered any of the ills that are being suggested about nonprofit funding of incredibly good ideas that come to our district from our educators.”