More than a dozen state and local officials attended the … 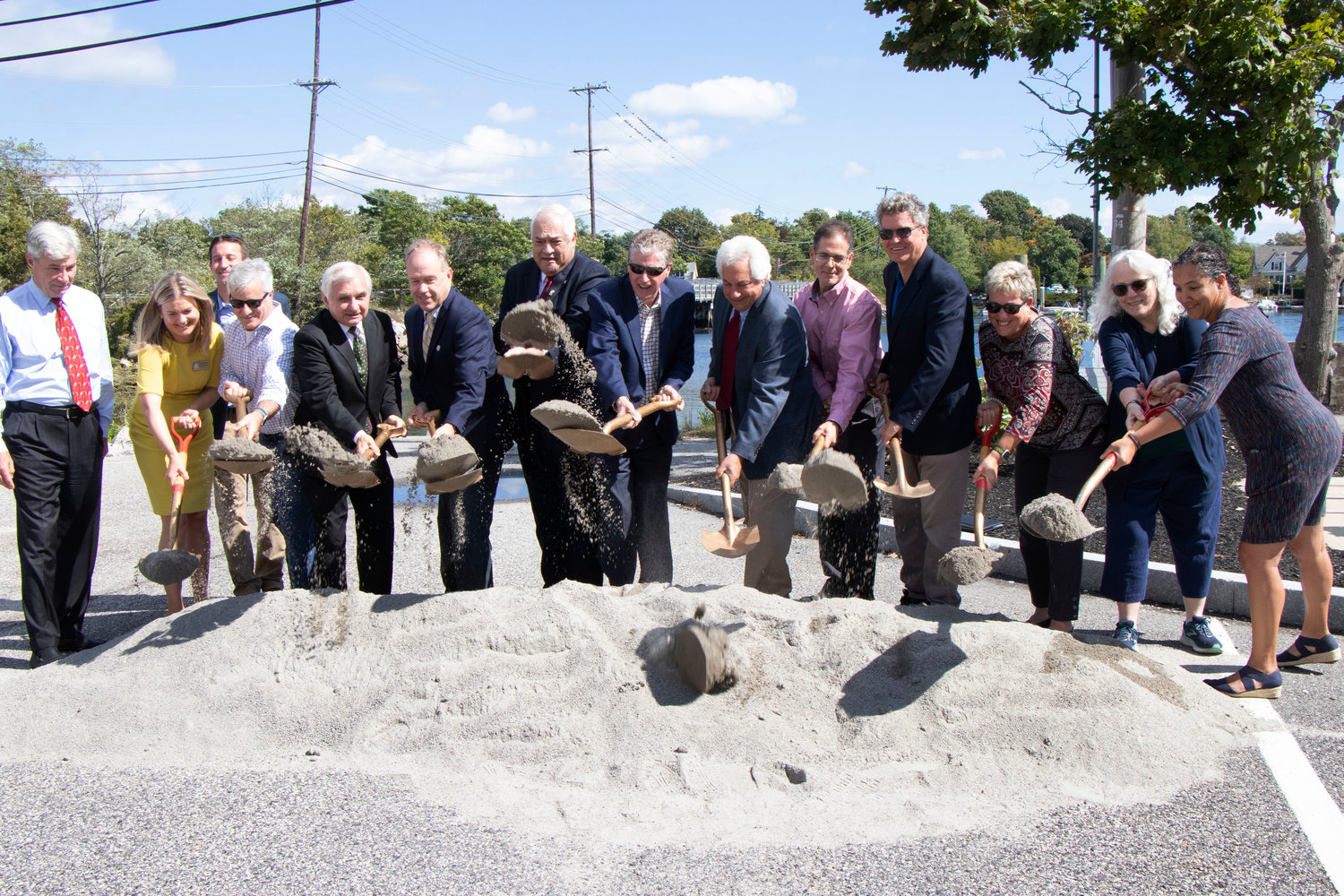 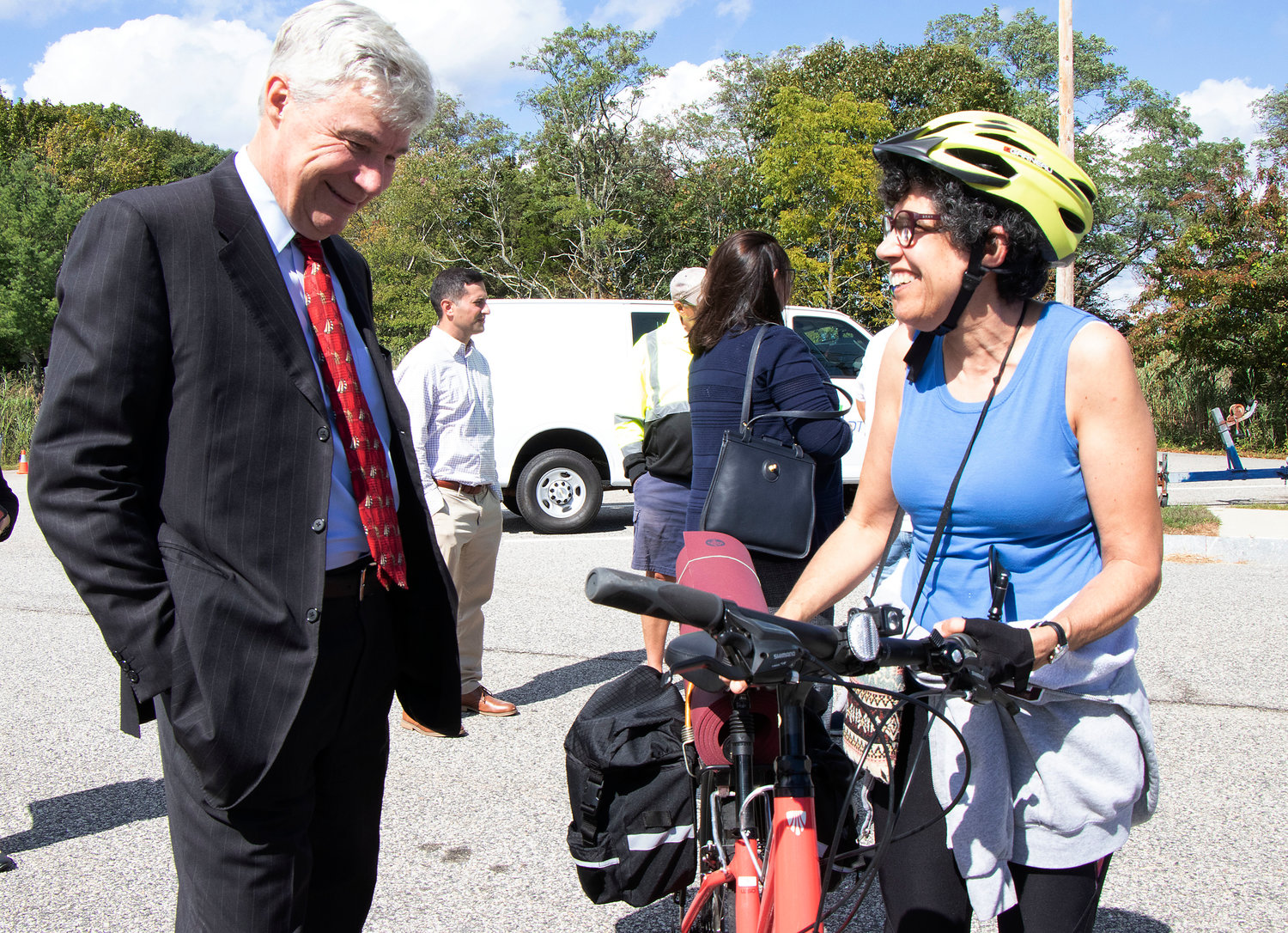 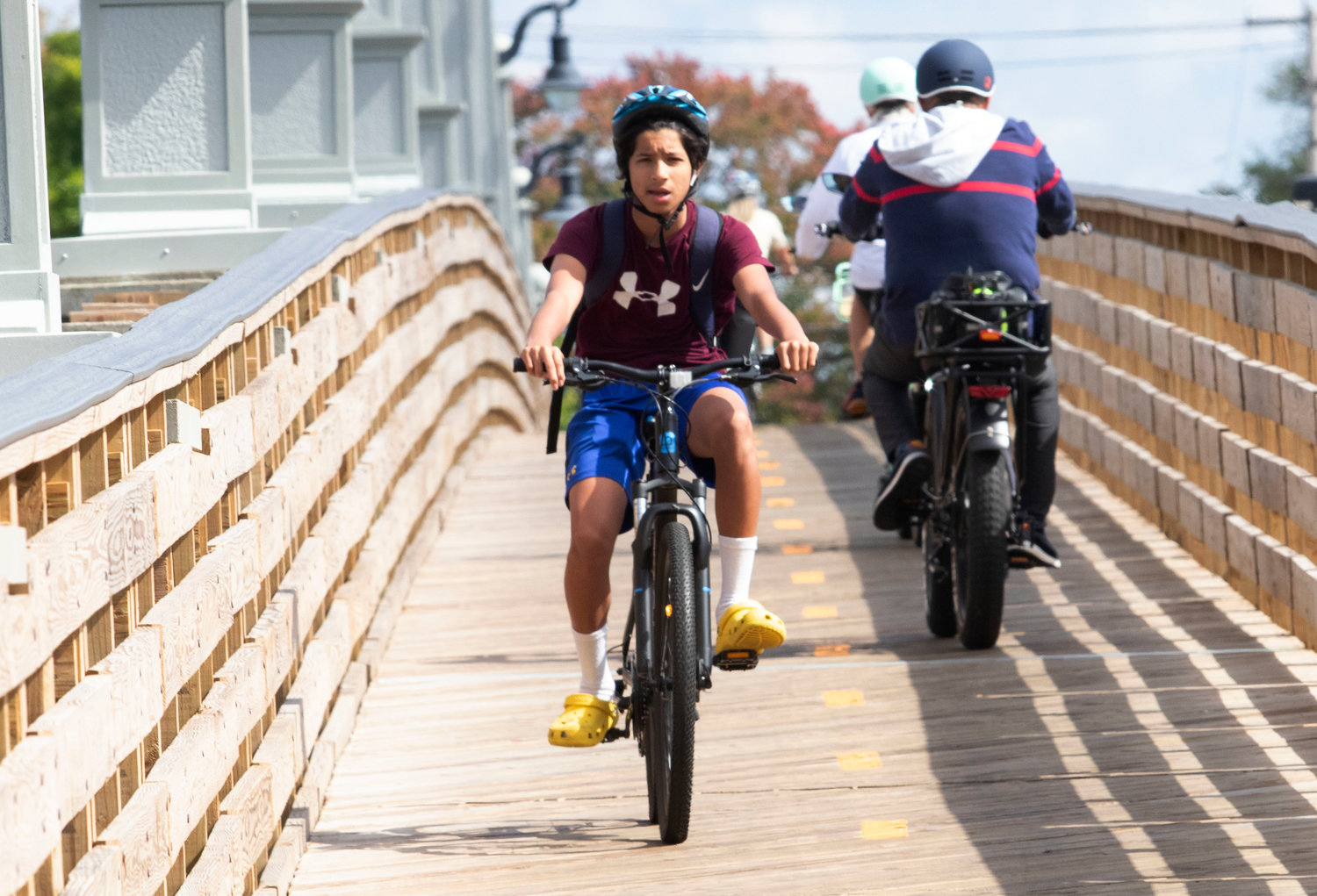 The temporary detours, shown here, will be removed when the bike path bridges are reopened.
Photo by Richard W. Dionne Jr. 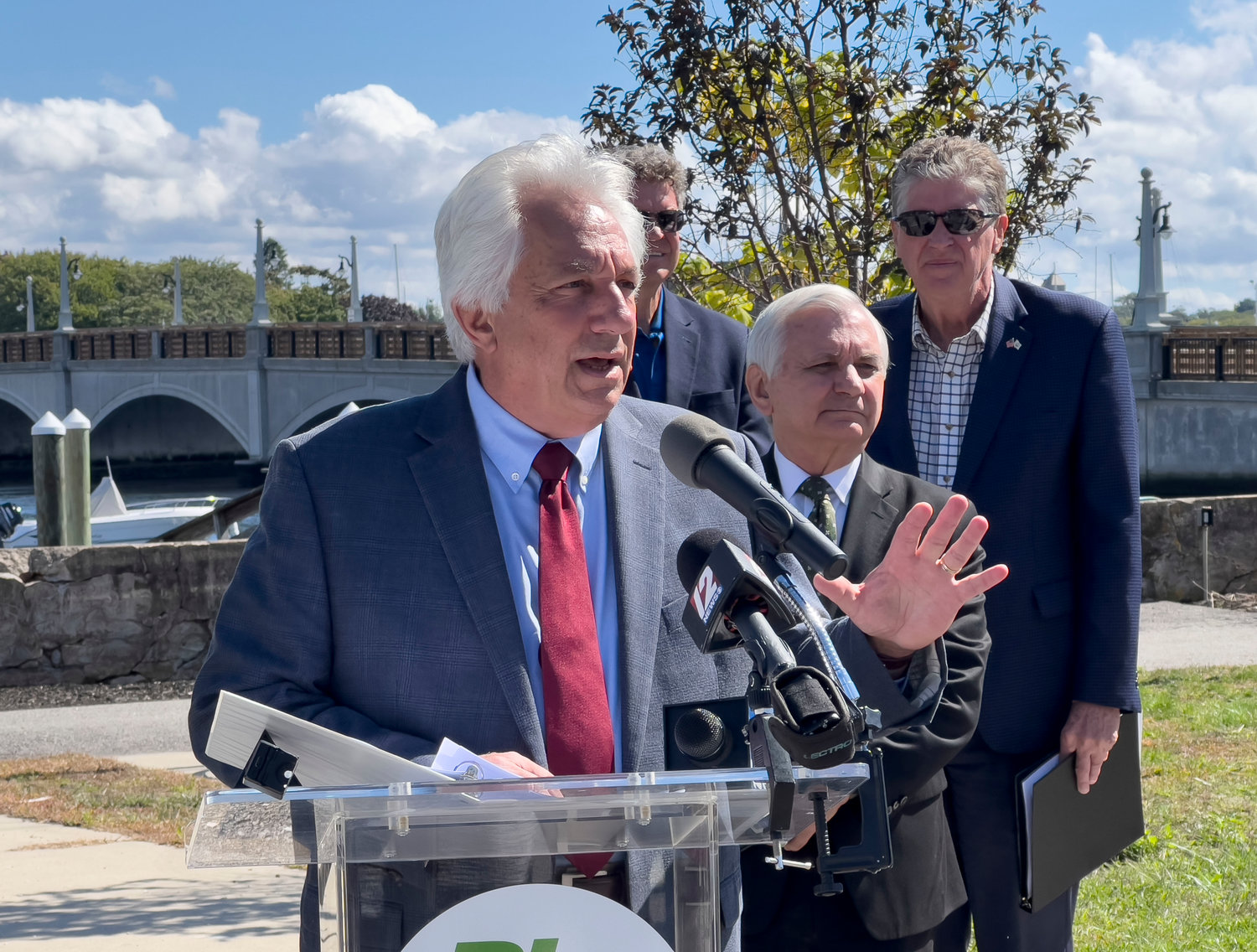 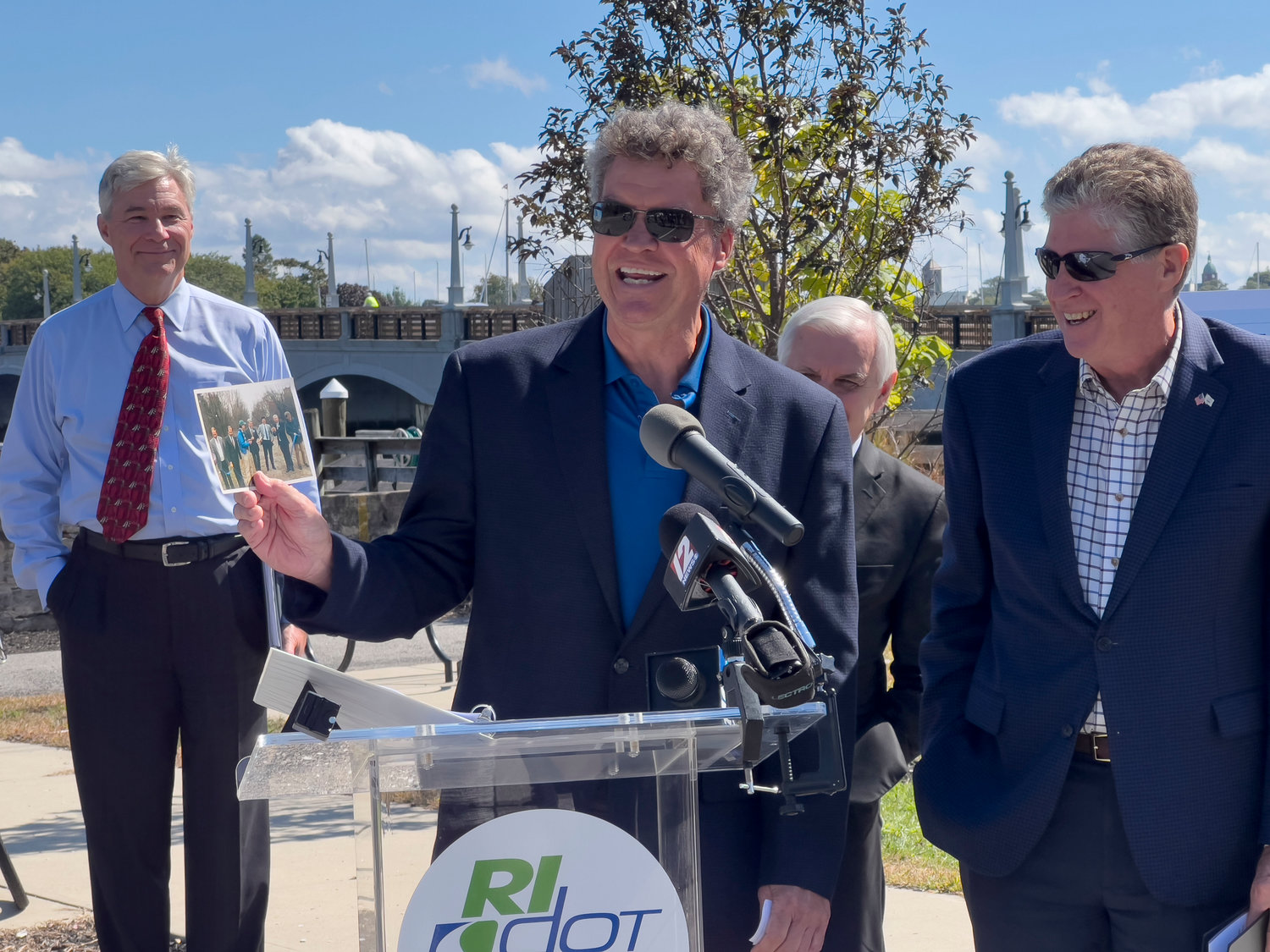 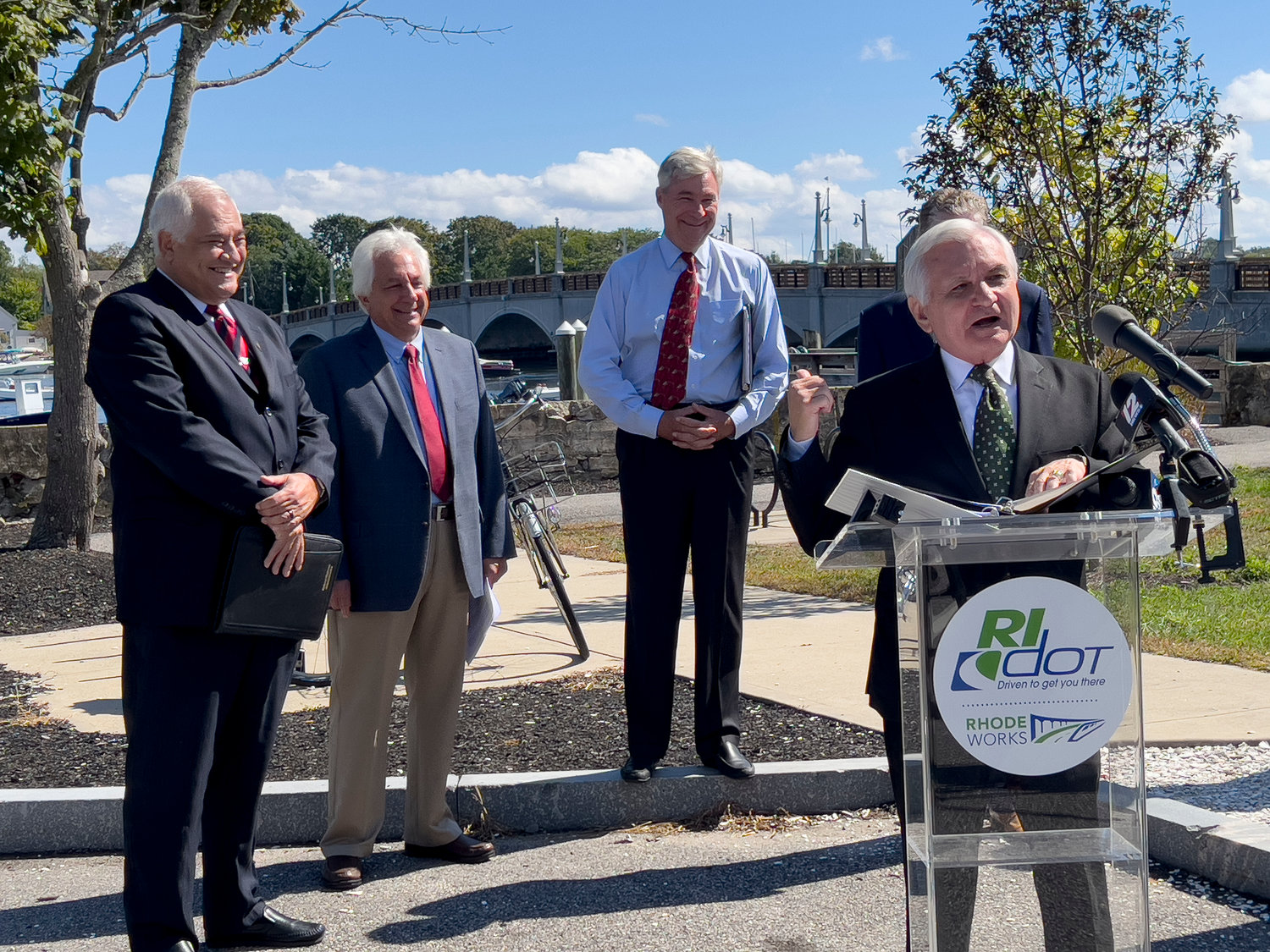 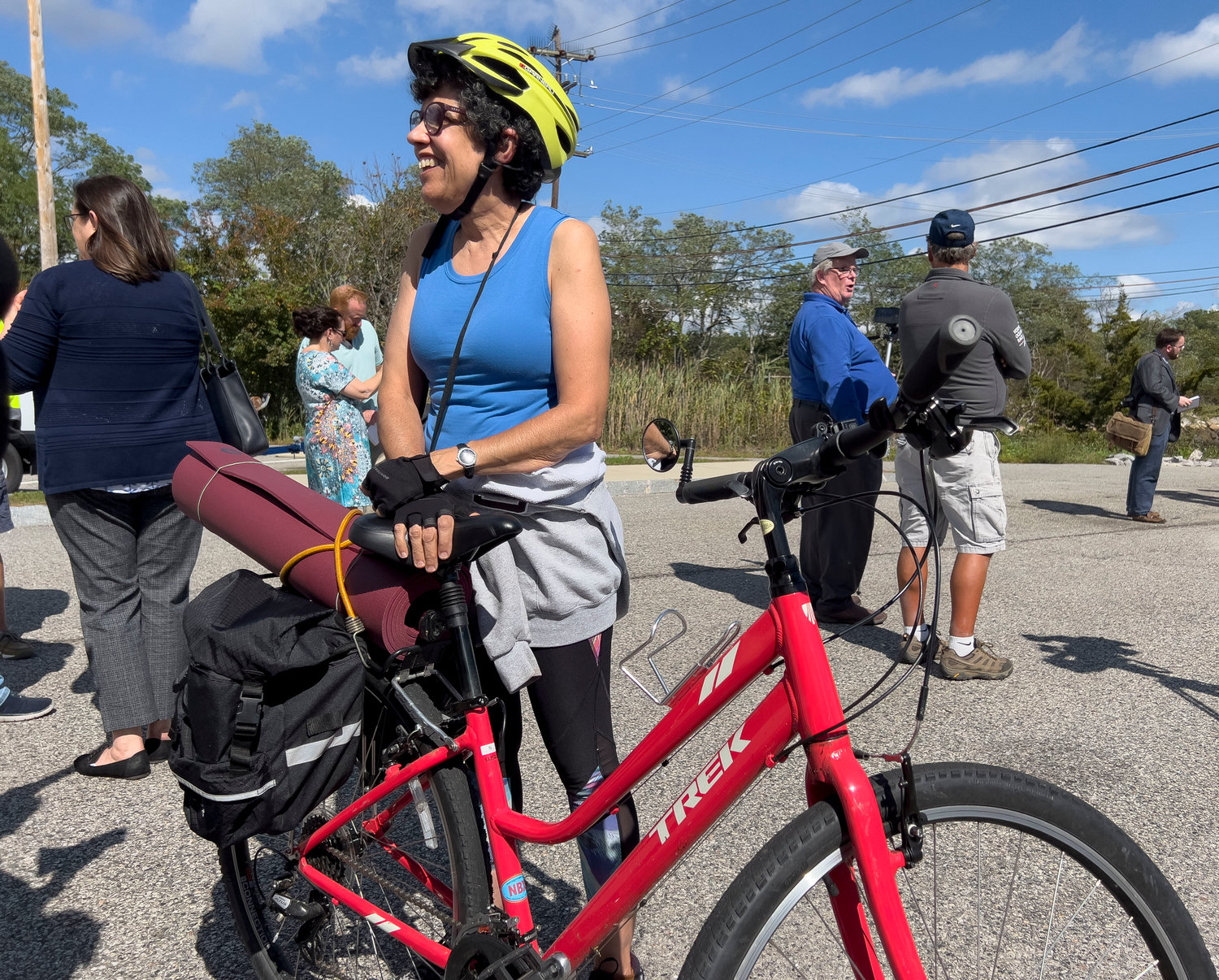 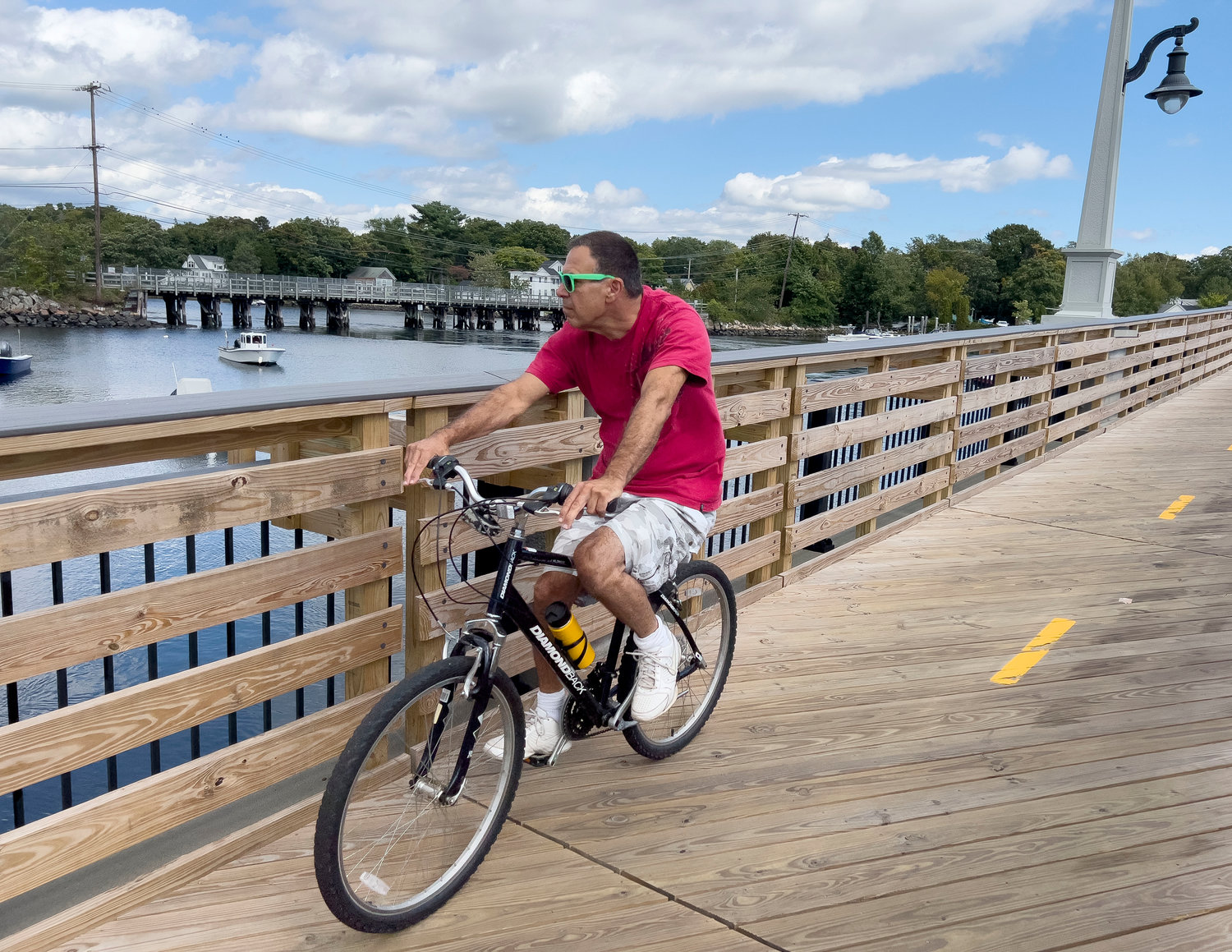 A bicyclist rides over the temporary detour with one of the bike path bridges in the background.
Photo by Richard W. Dionne Jr. 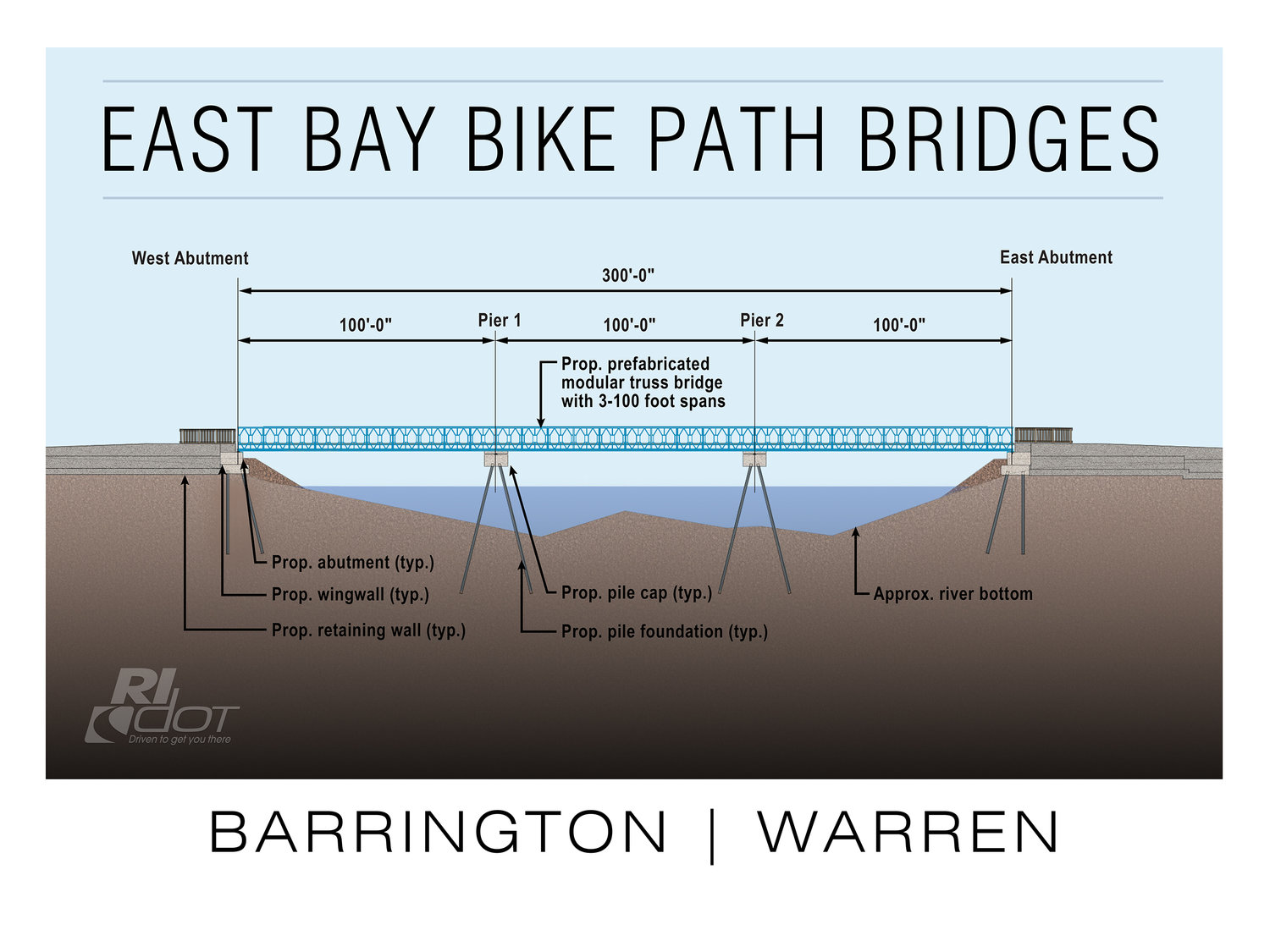 More than a dozen state and local officials attended the groundbreaking event, which was held at Police Cove Park on Monday, Sept. 26.

Rhode Island Department of Transportation Director Peter Alviti welcomed everyone to the ceremony.

“It’s a great morning to kick off a project like this. It really is a great project, one that’s been brewing now quite some time,” Alviti said. “It’s been a journey and a saga for everyone involved. But I first want to thank the local leaders here today, for being such passionate advocates and champions for these two bridges, and for working with us.

“There was some push and shove.”

The state ordered the bike path bridges closed in Oct. 2019, citing structural deficiencies and safety concerns. On Monday, Alviti said the design work for the bridges had already started, and officials expect construction to begin in the spring. Aetna Bridge and DHV Engineering have been selected as the design-build team.

Alviti said the new bike path bridges will be completed in 2025.

He said the design calls for prefabricated modular bridges. Each will span 300 feet and rest upon two piers, creating a safer environment for boaters and other people using the Barrington and Warren rivers. The current bike path bridges have a total of about 200 piers.

“Some of the pilings you see supporting these structures actually have nothing below the water line,” Alviti said, referring to the existing bridges. “They’re hanging rather than supporting the bridge.”

The DOT director, standing near the Police Cove Park boat launch, said the state had initially planned a simpler repair project for the bike path bridges when they were closed in 2019, but officials soon discovered a repair job would not be sufficient.

“So the cost then escalated from a simple repair cost of $10 million to a complete replacement of both bridges on the order of $20 million,” Alviti said.

“And thanks to the people that you see behind me, Sen. Reed, Sen. Whitehouse found the federal dollars to fund and augment the funding that we had already set aside for this project, and thanks to Gov. McKee for providing the 20 percent state share of the project. … In order to match the federal funding.”

“It can’t happen soon enough, as far as I’m concerned,” Michaud said. “I’m very happy that they addressed a lot of the safety concerns we had at the beginning. It was pretty frightening. We were very concerned, so this (the temporary detours) is a huge improvement. But we’re very excited for the permanent solution.”

For a while, local officials and residents were not sure whether the bridges would ever be replaced. Some people believed the temporary detours would soon become permanent fixtures.

“When the federal money came down — when that news came down, that was the point where I was like ‘This is going to happen,’” Michaud said.

“As far as I’m concerned, and I’m sure as far Phil’s concerned, we were going to push to make it happen no matter what. I think both towns — the elected officials, the appointed officials, the senators, the representatives — everyone made very clear this was a non-negotiable point. These bridges need to be replaced. There’s no substitute.”

During an interview following the press event, Alviti said the DOT had been committed to the bike path bridge work since “Day 1.”

“The (public) push certainly helped. It helped in our approach to getting the federal funding … but it also helped us hear what the needs of the local community were and how much this meant to them,” Alviti said. “That becomes very important in the decision-making process.

“But early on, we at DOT were committed to getting this done. The key was finding the funding to be able to put the shovel in the ground. Unlike DOTs of the past, we don’t commit to doing projects until we have them fully funded. So that when we say that we’re going to start a project, the money is going to be there to complete the project. The same is true with every bridge and road project, and bike path and train station projects that we’re doing. This bike path is no different.

“We needed to know that the funds were there. Not only at the federal level, but the all-important state share of that. The increased costs required us to come up with additional state dollars that the governor and the legislature put together in this budget to provide to us to be able to do this. There were a lot of working parts.”

Rep. Jason Knight attended the groundbreaking ceremony on Monday. He was very involved in the push to repair or replace the bike path bridges.

“Any day where government actually works like it’s supposed to, I am happy.”