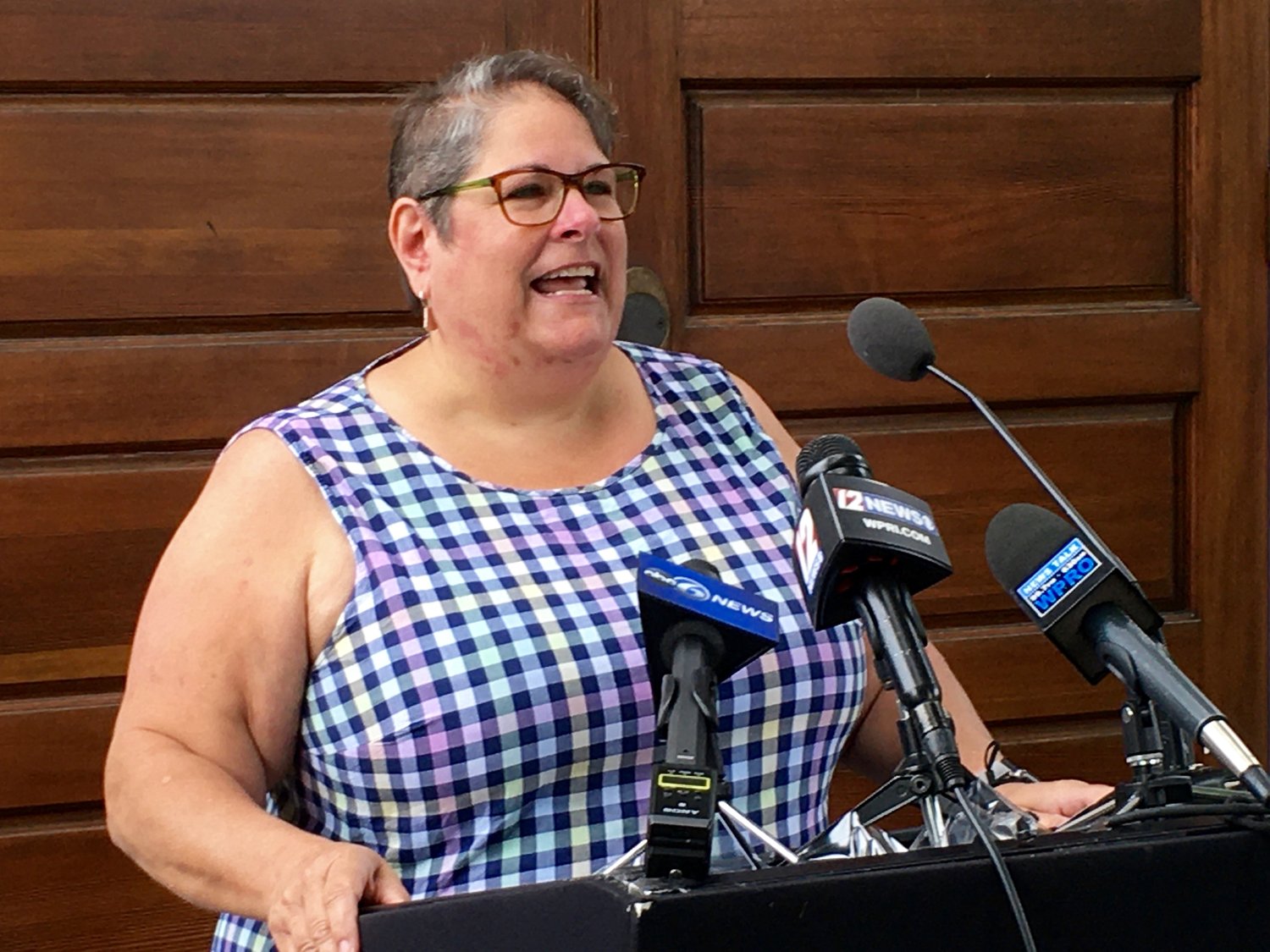 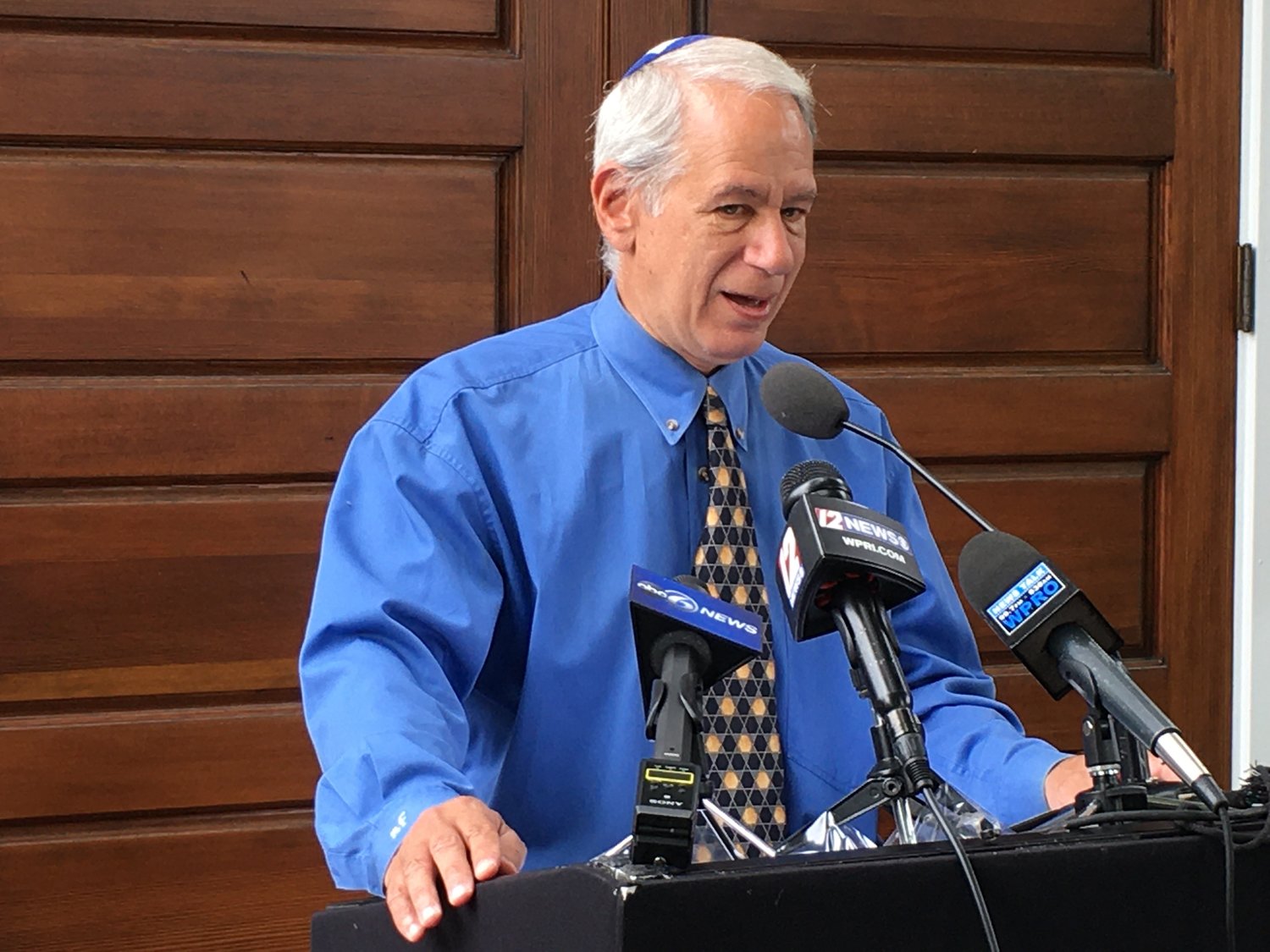 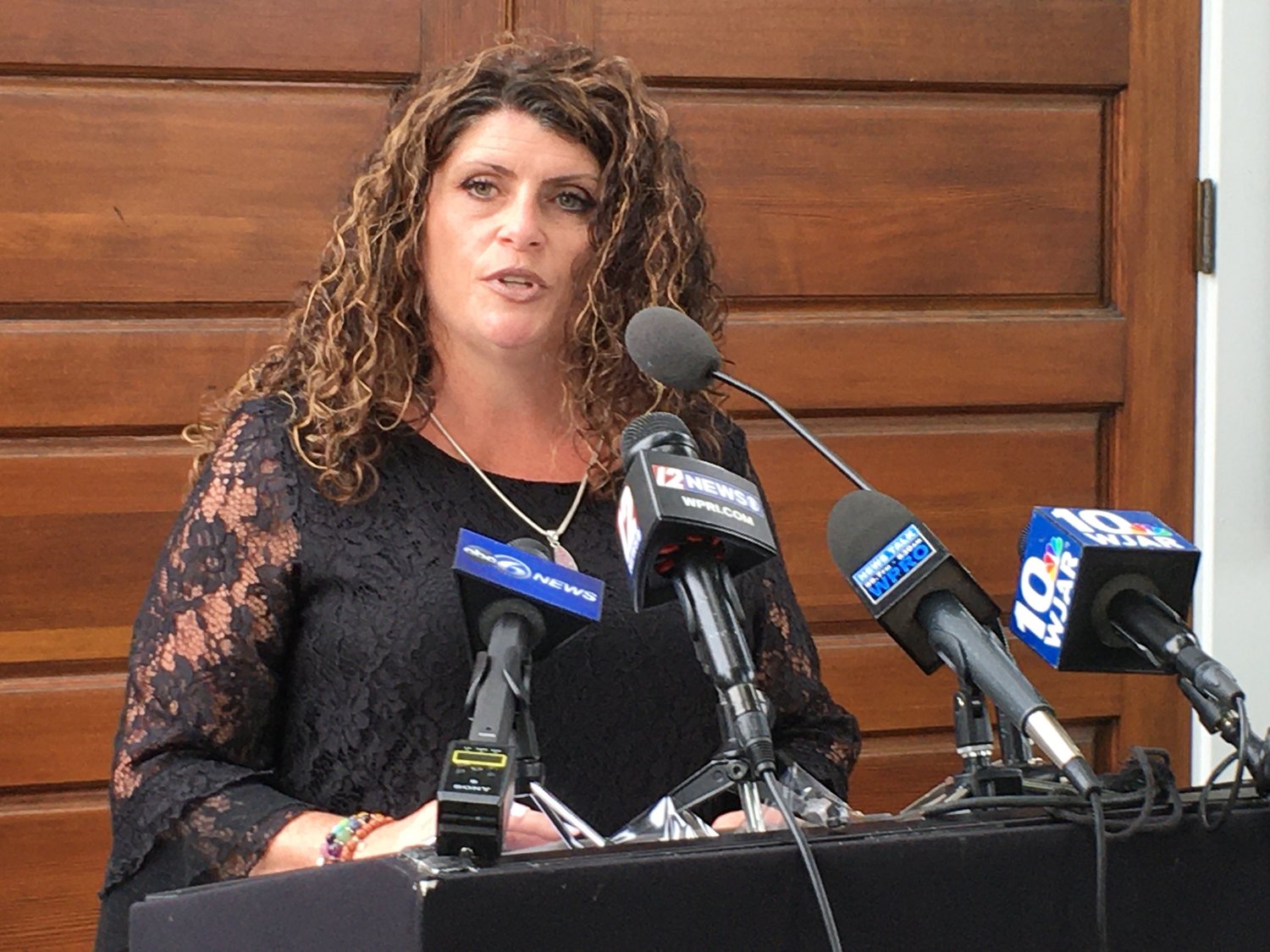 Michelle Way-DaSilva, co-president of the local teachers' union, said the school committee has so far refused to even talk to them. 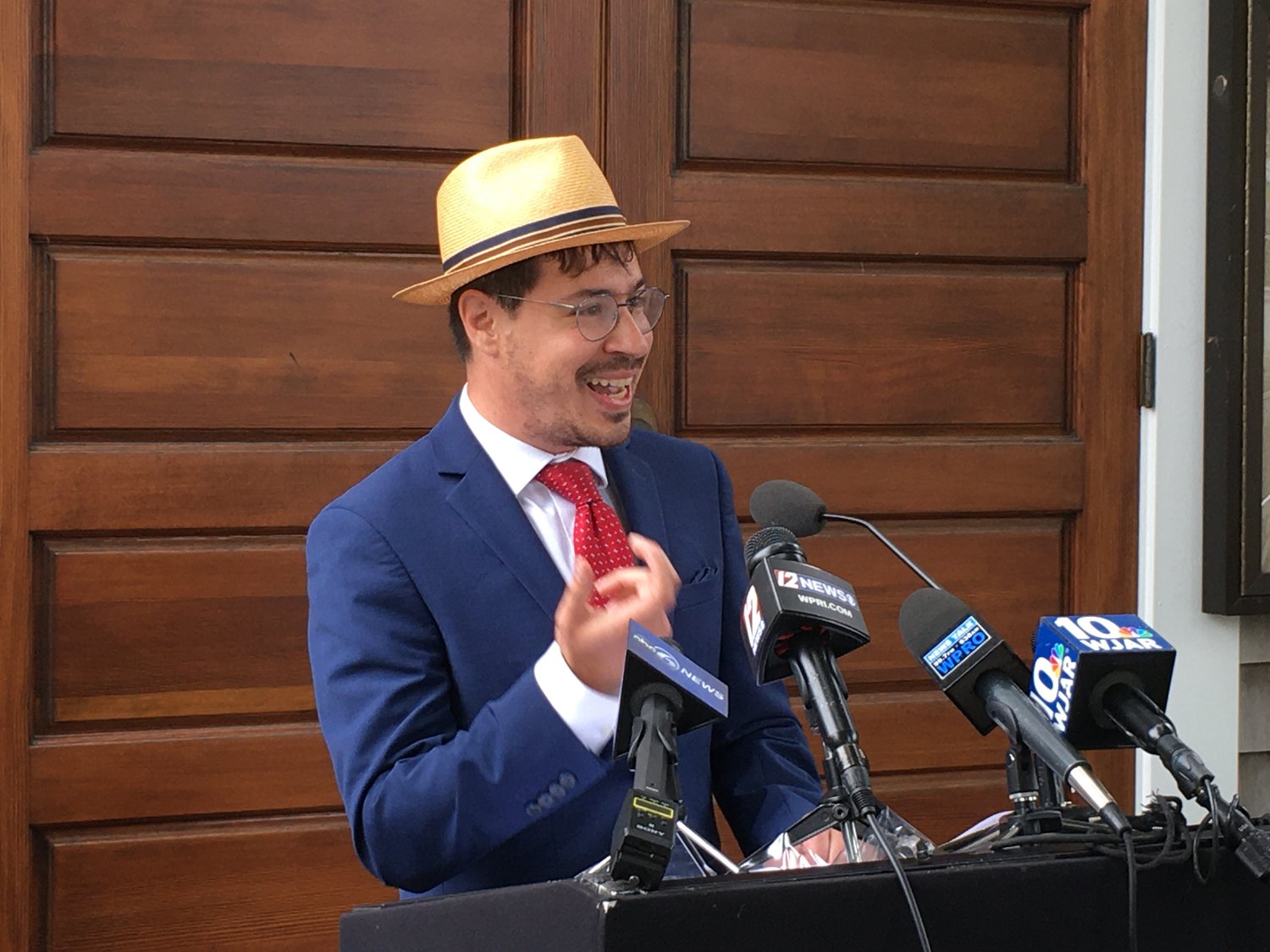 A series of speakers representing both Jews and educators stood on the front step of United Brothers Synagogue in downtown Bristol on Thursday to denounce five members of the Bristol Warren Regional School Committee and their refusal to consider changing the 2021-22 school calendar.

The current school calendar puts the first day of school as the day after Labor Day, Tuesday, Sept. 7. That is also the day that Jews worldwide will celebrate Rosh Hashanah, their religious new year and the holiest day in their religious calendar.

On multiple occasions in the past month, a majority of school committee members have rejected efforts to open a discussion about the school calendar (by 5-4 votes), and they’ve both denied a grievance from the teachers’ union and dismissed an anti-discrimination grievance from a member of the faculty.

One by one, speakers told a gathering of most of Rhode Island’s media outlets — TV, radio, print and digital — as well as a small crowd of supporters and local officials, how the school committee could deploy an easy fix, but instead has positioned this school district as anti-Semitic.

“Jewish educators and families are not asking for anything egregious, they are simply asking for their first day of school not to be the holiest day in the Jewish calendar, Rosh Hashanah,” said Stephanie Hague, director of community relations for the Jewish Alliance of Greater Rhode Island, who served as host of yesterday’s press conference.

She said the school committee’s actions are taking place in the face of “a disturbing rise in anti-Jewish rhetoric, vandalism and violence across our nation” and that “data shows that three-quarters of America Jews feel there is more anti-Semitism than there was five years ago.”

Next to speak was Donna Stouber, teacher at Kickemuit Middle School for 27 years. Ms. Stouber was the first to speak up in this district and was initially the most vocal advocate for changing the school start date. She said she emailed the superintendent and everyone on the school committee; only three board members wrote back to her, one of whom agreed to put the calendar back on an agenda for a public vote. That’s when the committee voted 5-4 to not hold any discussion on the topic. Voting in the majority were Chairwoman Marjorie McBride, Tara Thibaudeau, Victor Cabral, Sheila Ellsworth and Karen Cabral.

While many school districts have traditionally been closed for Rosh Hashanah (Barrington, for example), the Bristol Warren district has not. Teachers and students have always been given permission to stay home to observe the holiday. Ms. Stouber and others feel that solution is not good enough when talking about the first day of school.

Ms. Stouber said she learned Wednesday night that her discrimination complaint has been dismissed, because she is being given the opportunity to take the day off from work. “So they certainly still do not get it. It’s not about having a day off, it’s about being there for our students when they need us the most,” she said.

“The chair of our school committee has stated that the first two days of school are just two days out of 180 … I beg to differ. Not all school days are equal. These two days are incredibly important to students, and to educators. It’s not fair to students to deny them those two days,” Ms. Stouber said.

Jennifer Azevedo, who grew up in Warren, went to Warren schools, and is now deputy executive director of the National Education Association Rhode Island, talked about how the statewide teachers’ union filed two grievances — one for violation of the anti-discrimination clause in their contract, the other for violation of the anti-discrimination section of the school district’s policies. At a June 29 hearing before the district’s personnel subcommittee, Ms. McBride and Mr. Cabral voted to deny those grievances, while Erin Schofield voted in the minority.

Ms. Azevedo said Mr. Cabral called moving the start date to accommodate Rosh Hashanah a “slippery slope.” She said Ms. McBride described her own process of researching and finding 44 other religious holidays throughout the school year, and taking off all those days would send students to school all summer.

“This is such an easy fix, and we implore the school committee to simply do the right thing,” Ms. Azevedo said. “It’s not so much that it’s Rosh Hashanah, it’s that it’s the first day of school. You’re asking people to choose between their education and their religion.”

She said the union is taking the next step in the legal process, bringing this issue to expedited arbitration.

Rabbi Howard Voss-Altman of Temple Habonim in Barrington criticized the argument that this request is a “slippery slope.” He adamantly said it is not, because the Jewish community has not asked for this accommodation before, and it is not likely to ask for it again anytime soon. He said the last time Rosh Hashanah fell this close to the start of a school year was 1994 — so it does not happen frequently.

“This year happens to be a year unlike most years. So this year we have asked for an accommodation, because this year, Rosh Hashanah, our high holy holiday, has fallen on the first day of school … No child should be punished, no teacher should be punished, because of their religious beliefs, and that is what is happening here,” the rabbi said.

“Why would you punish a religious minority … when you could so easily fix it? Why are we here? I don’t know, because no one will explain it,” Rabbi Voss-Altman said.

He concluded with a description of what happens during many of the Christian high holidays, like Christmas Eve, Christmas Day and Easter.

Michelle Way-DaSilva, co-president of the Bristol Warren Education Association and seventh-grade math teacher, reiterated the claim that the district is being discriminatory.

“The school committee’s decision to force our school community to choose between their faith and their education is, quite plainly, discrimination,” she said.

She also talked about hypocrisy between their classrooms and the school committee. “We as teachers make it clear that the basic rights of acceptance, equality and treating each other respectfully are the norms in our classrooms every single day. We will accept no less. Why should we accept less from our school committee members?”

She also challenged the school committee to have a genuine conversation — something they have so far refused to do. “We would welcome the opportunity to sit down and have an actual, real conversation with the school committee any time, where they would listen reasonably and work with us, and they can form decisions for the benefit of the communities that they serve. Unfortunately, we have yet to see any indication that this school committee has any desire, or interest, to do anything remotely close to this,” Ms. Way-DaSilva said.

Last to speak was Rabbi Barry Dolinger, president of the Board of Rabbis of Greater Rhode Island. The most demonstrative of all, he relayed an Old Testament story of Moses and the Pharaoh, and how Moses, after attempting negotiation and compromise, and feeling there was no other option, finally turned to hostility, plagues and the wrath of God. He promised the same — without rivers turning red or anyone getting hurt.

“We’re not asking anymore. We are demanding. The first day of school will not be on Rosh Hashanah. That’s a promise. It won’t happen. We’re going to rise up and make that not happen,” Rabbi Dolinger said.

He went further into what he considers the anti-Semitism from the school committee. “We don’t know always what people think about Jews,” he said. “But when other districts are making accommodations, when the state suggests accommodations, when there are simple fixes, and when a minority community comes forward and says, ‘we are aggrieved and here are the simple fixes, and by the way, here’s how other people in neighboring cities and towns are fixing it, will you consider it?’, and they say, ‘we don’t have time to discuss that, we will vote that off the agenda … we don’t have to guess.”

He said the district is treating Jews like they are pests: “That’s the message we’ve all heard. You’re like bugs. We don’t care.”

Rabbi Dolinger added: “It’s extremely sad, at a time of rising anti-Semitism, we have to meet to fight this needless display of discrimination against Jewish students.”

Asked for clarification on what comes next and how they will continue this fight, Rabbi Dolinger said that Ms. Stouber, the middle school teacher, has already filed an Equal Employment Opportunity complaint in federal court. They also are talking to a number of students who are aggrieved and are contemplating filing a First Amendment lawsuit against their own school district.

When a reporter pointed out that time is of the essence, the rabbi said, “The school committee can declare a snow day at 6 a.m., they can change the school calendar.”

Mixed with the crowd on Thursday were Bristol Town Councilor Tim Sweeney and state Rep. Jason Knight (D-Barrington and Warren). Both were there in support of the effort the change the start date.

Also there was Carly Reich, the sole representative of the school committee in attendance. Asked why the issue matters to her, she said: “I am culturally Jewish. My husband was born and raised Jewish. He was bar mitzvahed. It is important for me to speak for all the other people in our district and our community who aren’t being heard. This is a simple fix. It’s just one day. I think we should move it. As a school district, and as educators, this is a teachable moment, and we can show, as a community, once and for all, that we are tolerant and accepting of others. And I don’t think we’ve done a very good job of that.”