Tracey McGee-Moreira, an educator for 34 years, points to March 13, 2020, as the day the entire landscape of education changed. It was, to her way of thinking, the true start of the pandemic, when … 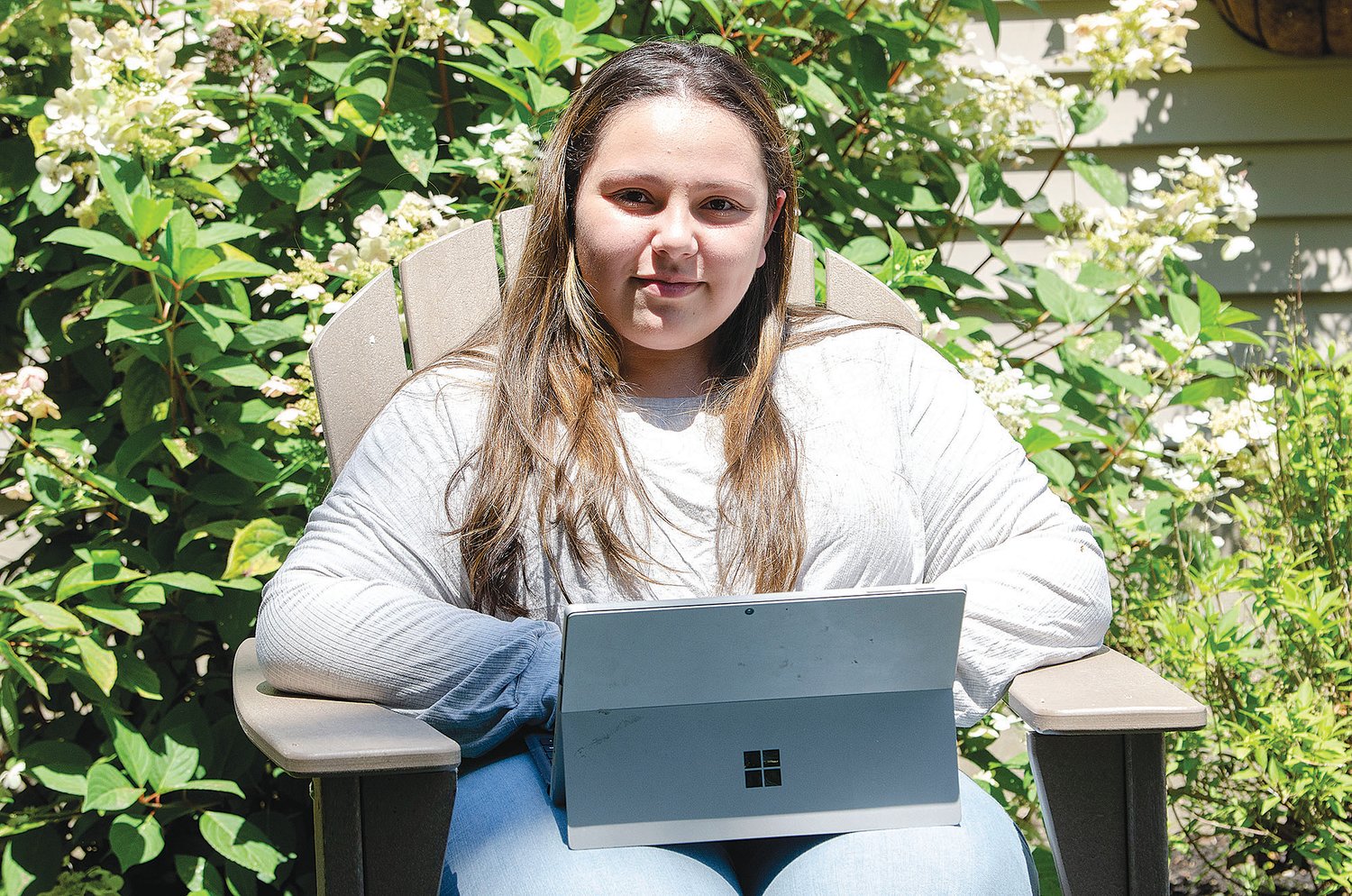 Morgan Briere of Tiverton will be a freshman in the all-virtual Rhode Island Connections Academy this fall.
Richard W. Dionne Jr. 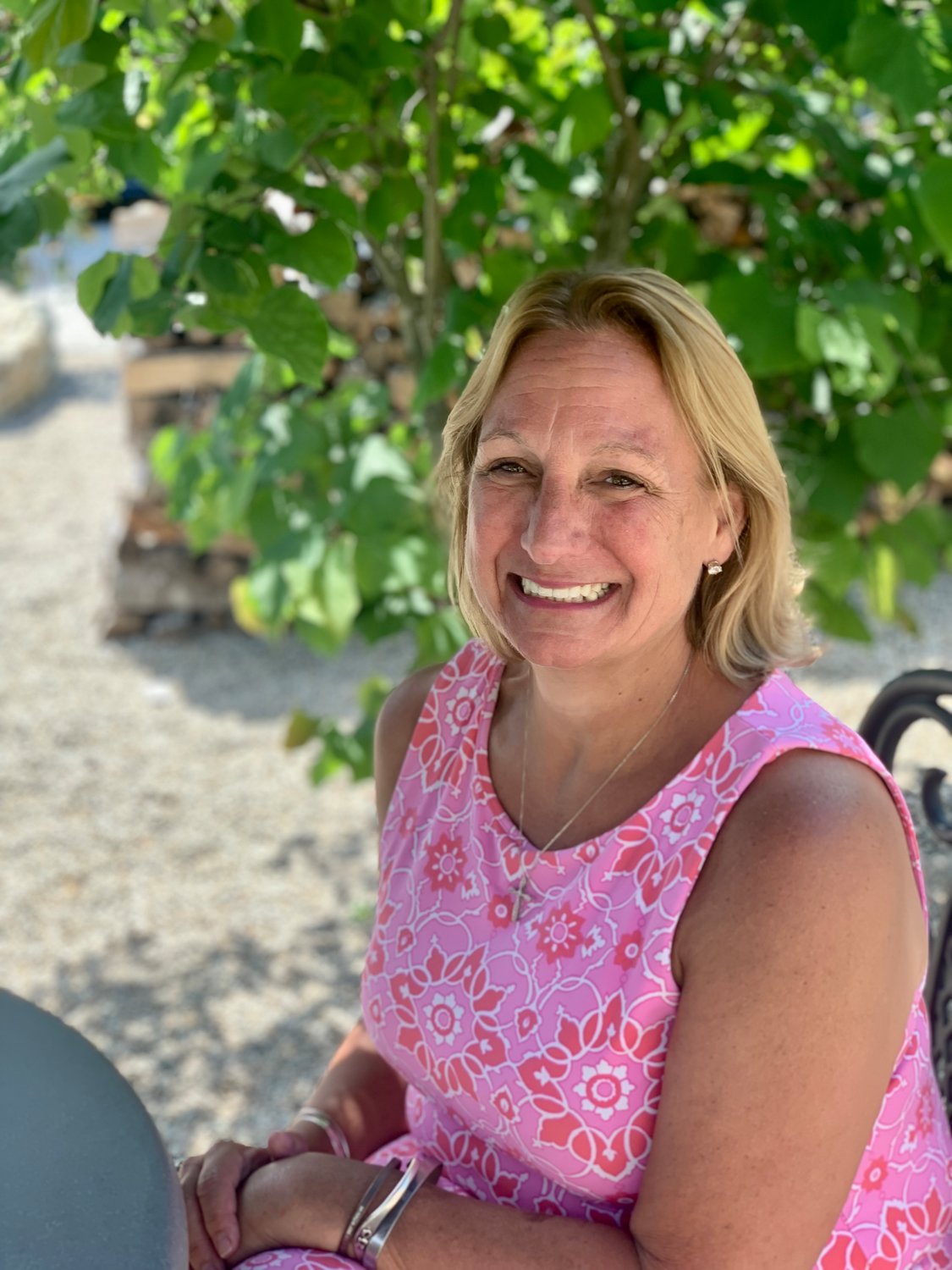 Tracey McGee-Moreira “retired” from her job in the Barrington School District to become principal of the Rhode Island Connections Academy, under the umbrella of the East Bay Educational Collaborative, based in Warren.
Previous Next
Posted Thursday, August 4, 2022 6:00 pm

As superintendents, I think we all have to recognize that there are kids who probably are not going to graduate from our schools, but in this situation, they will succeed.”
Dr. Peter Sanchioni, Tiverton
By Ruth Rasmussen

Tracey McGee-Moreira, an educator for 34 years, points to March 13, 2020, as the day the entire landscape of education changed. It was, to her way of thinking, the true start of the pandemic, when everything shut down. It was also the day Rhode Island’s education commissioner decreed that April break would be canceled and “spring break” would begin immediately.

“Friday the 13th,” she says with a laugh. “That’s how I remember it.” At the time, she was principal of Hampden Meadows School in Barrington.

“We all went on a break – this quick break – and what did we do during this break? We learned how to use Zoom … That entire break, we spent learning.”

She said when school was back in session – it was now online school – she was impressed as she watched teachers, students and parents rise to the occasion. And she was struck by how much collaboration and communication were taking place under such daunting circumstances.

She remained with Barrington Public Schools for one more school year, until the summer of August 2021, when she accepted the principal’s position at the newly formed Rhode Island Connections Academy (RhoCA), a virtual learning school that was beginning its inaugural year.

Throughout the first year in her new academic home, McGee-Moreira observed how collaboration and communication were the key ingredients to students’ success, much as they were during the Covid distance learning/Zoom experience.

Students who attend RhoCA remain enrolled in their local school district, and approval of the district’s superintendent is required before a student can participate. Each school district covers their students’ costs to attend, which in the coming school year will be $7,400.

The school, which is authorized by the East Bay Educational Collaborative and is state certified, served more than 100 Rhode Island students from 11 districts in its first year. It graduated six seniors, including one from Tiverton. (Graduating seniors participate in ceremonies and receive diplomas from their home school.)

RhoCA is part of Connections Academy, one of the largest K-12 online school networks in the United States. Its parent company is Pearson Education, a for-profit international company with U.S. headquarters in Baltimore. Pearson’s website shows it operates accredited online programs with certified teachers in 31 states and has delivered fully online public-school education to more than one million students in the past 20 years.

When the pandemic brought the world of distance learning to most of the nation’s students in March 2020, many families’ coping mechanisms were tested to the max, as they set up makeshift classrooms in living rooms and were forced to quickly master the intricacies of Zoom meetings. A return to “normal” was a high priority for nearly everyone.

A certain segment of the student population, however, thrived in their at-home classrooms, and virtual schools such as RhoCA began to look like an attractive alternative for some.

In the United States, approximately 375,000 K-12 students attended free, statewide online schools full-time in 2019-20. That number jumped to 656,000 for the 2020-21 school year, according to National School Choice Week, an organization that promotes education alternatives and supports families seeking options outside of traditional public schools.

Thirty-five states offer a variety of full-time, public online schools at no charge to families. Paid online programs are now available in all 50 states.

Full-time virtual schools have distinct characteristics, which generally include a set curriculum, accredited teachers who deliver “live” classes, continuous feedback to each student, grading, and learning coaches who are typically parents or caregivers who work closely with students to ensure they stay on track.

While educators and parents interviewed for this article were generous in their praise for virtual schools, the industry is not without its detractors. The National Education Policy Center (NEPC), a nonprofit education policy research center located at the University of Colorado, publishes annual reviews of K-12 online schools and cites overall poor academic performance, lower graduation rates, and the need for expanded government oversight and accountability as areas that need improvement.

A national debate has simmered for years in educational communities, where supporters of school choice say alternatives to traditional public schools are necessary to give families options, while opponents say many choices offered are not appropriately regulated, do not address problems of under-served populations, and divert funding from local school districts to for-profit corporations.

One size does not fit all

Dr. Peter Sanchioni, superintendent of Tiverton Public Schools, has had ten years’ experience with virtual learning schools, initially in Massachusetts, where he served as superintendent in Natick, before relocating to Rhode Island. He was one of the founding members of Massachusetts-based TECCA Connections Academy, which currently serves 3,000 and graduated about 300 students in the most recent school year.

Asked to describe the type of students who benefit most from full-time virtual schooling,

Sanchioni said a twist on the old cliché is appropriate – “One size doesn’t fit all.”

“There are certain kids who will do better in a virtual school. The reasons why are wide ranging. Sometimes they are anti-authority kids, or kids who were bullied, or kids who can’t get up in the morning, or have a phobia. Then there is the other part of the spectrum – kids who are world class athletes, hockey players, dancers, or skaters, for example, who are training during that time when school is in session, and they need a more flexible schedule. You’ll see military kids who are in transition all the time. And sometimes, parents just make the decision that they know their child would be better served at home.”

The coach is the key

The learning coach is key to the student’s success, say both McGee-Moreira and Sanchioni. This is most often a parent or other caretaker within the home, who will check the student’s work, ensure daily attendance, and help keep lines of communication open between teachers and the family.

Sanchioni’s experiences with TECCA brought him in contact with students he believes would not have graduated if they had not had the virtual learning alternative.

“As superintendents, I think we all have to recognize that there are kids who probably are not going to graduate from our schools, but in this situation, they will succeed … these kids graduate and are going on to college. Some can get into the most competitive colleges around.”

Flexibility in scheduling can be appealing to some students and their families, who for a vast number of reasons may feel constricted by the hours of operation offered by traditional public schools.

McGee-Moreira described one student who enrolled in RhoCA in the middle of the school year. The high schooler had just moved to Rhode Island and told the principal during their welcome call, “I’m all done with kids being immature. I just want to do my work and get it done, because I’m opening a business.”

The school’s schedule allowed the young entrepreneur to launch her business – she is a tattoo artist – while attending most of her classes in the evening.

“She did great,” said McGee-Moreira. “She knew what she wanted, and she was driven to get where she needed to go.”

The benefits of flexible scheduling

Flexible scheduling also proved to be an important benefit for Tiverton resident Tiffany Briere and her daughter, Morgan, who is entering ninth grade at RhoCA this school year. In December 2018 the two attended a Christmas lights show at a shrine in Massachusetts, and on the way home, the bus in which they were traveling was forced off the road and crashed into the woods. The accident upended their lives on many levels.

Fifteen months later, Morgan adapted easily to the new routine of learning from home when Covid made it necessary for schools to transition to distance learning. That experience helped pave the way for a successful academic year when she enrolled in eighth grade at RhoCa in 2021.

Briere says the flexibility in scheduling at RhoCA and the 1:1 attention with her teachers were of immense benefit to Morgan.

“She can go to doctor’s appointments and not feel stressed out. She can catch up with her work and doesn’t get left behind. I don’t have to worry about her missing something.”

Morgan did better academically this past school year at RhoCA than in prior years, said her mom. She described the teachers as “amazing” and always available.

Funding of virtual schools varies throughout the country, depending on state law. In Rhode Island, districts who have signed a contract with RhoCA pay each student’s tuition directly to the school. Districts like Tiverton are therefore cautious about approving a student’s transfer request without taking the necessary steps to ensure a successful outcome.

“We never want to make money the overriding factor,” said Sanchioni. “We always want to do what’s best for our kids.”

The school committee in Tiverton is involved in the decision, since the superintendent needs to demonstrate the source of the funding during the budget process.

“It’s getting tighter now,” he said. “Last year, every school district around got ESSER funds” [federal dollars directed to schools nationwide to help with hardships created by the pandemic]. “But those funds have been drying up, so we are tasked with looking at our own individual budget to meet that expenditure.”

Tiverton has made a commitment to send students to RhoCA in the coming school year, Sanchioni said. Some students have already received formal approval, and other applications are still being reviewed.

“It’s critical that we make good decisions as to who goes to these schools, because we want them to succeed. It’s a way to get kids to graduate who might never have made it in your local district, and that in itself you can’t put a price tag on.”

Editor’s note: Each school district makes its own decision on whether to sign an agreement with the Rhode Island Connections Academy, allowing their students to enroll in the virtual school program. Those letters of intent were mailed to every East Bay district. We confirmed that Tiverton and Portsmouth have signed agreements for the 2022-23 school year. Several attempts to reach administrators in the Barrington and Bristol-Warren districts were not successful.