The Mt. Hope soccer team suffered a heartbreaking 2-1 loss to Classical in front of a decent crowd despite a drizzly in the home opener on Wednesday night. The game looked to be headed for overtime, … 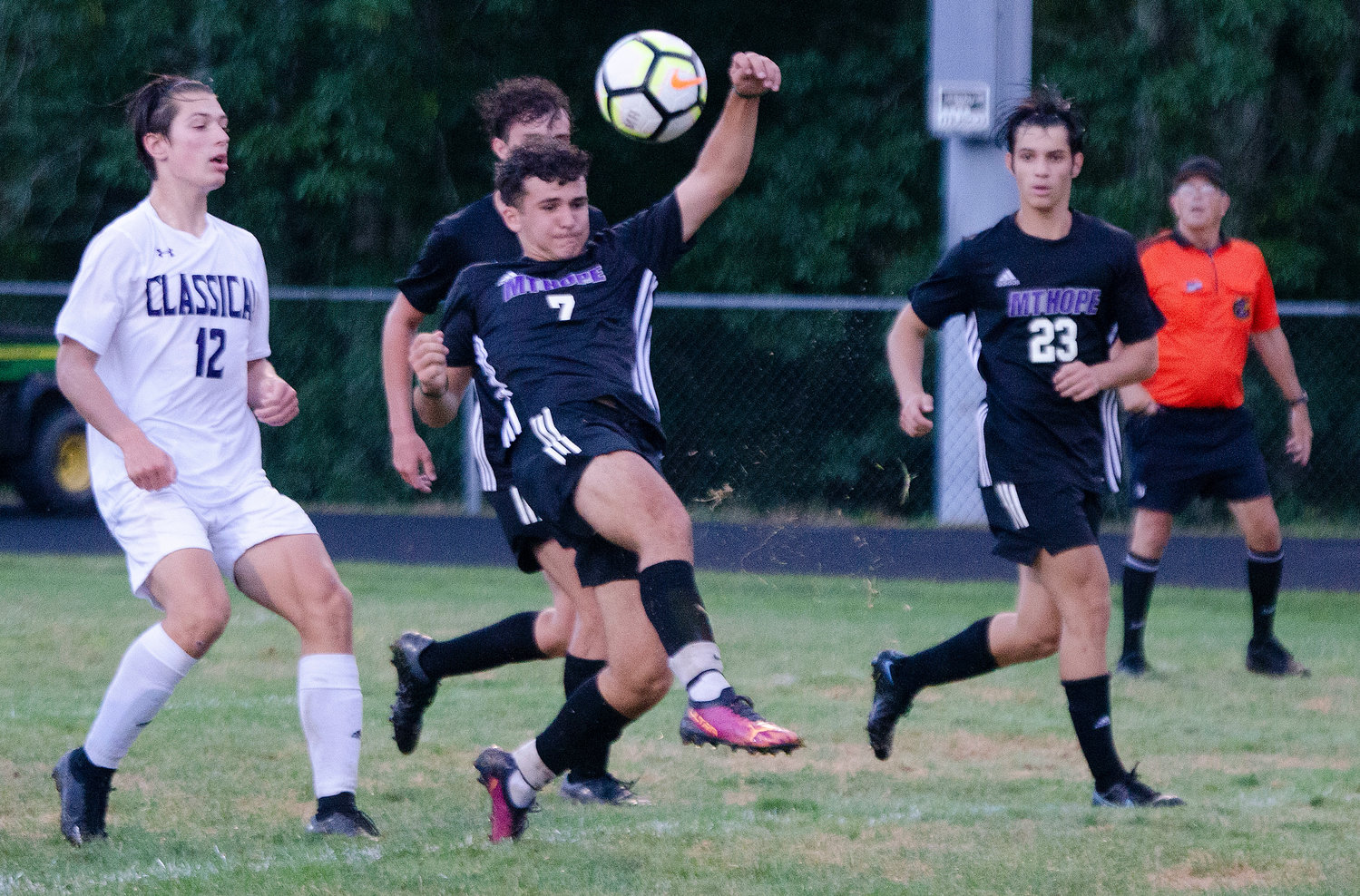 Senior midfielder Parker Camelo attempts to kick in a pass from a free kick late in the game. Jesse Wilson is at right. Wilson scored the Huskies lone goal to tie the game in the second half.
Photos by Richard W. Dionne, Jr. 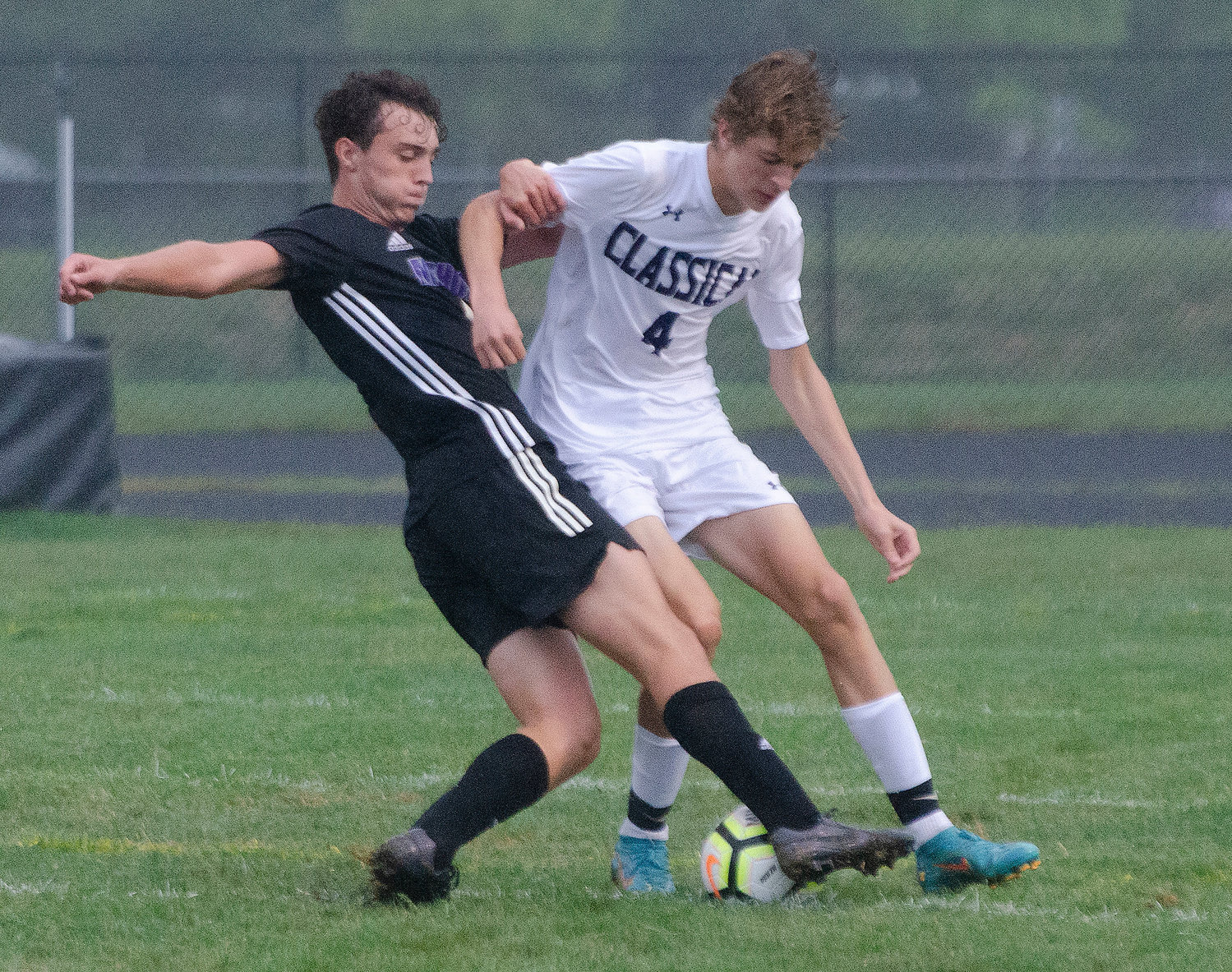 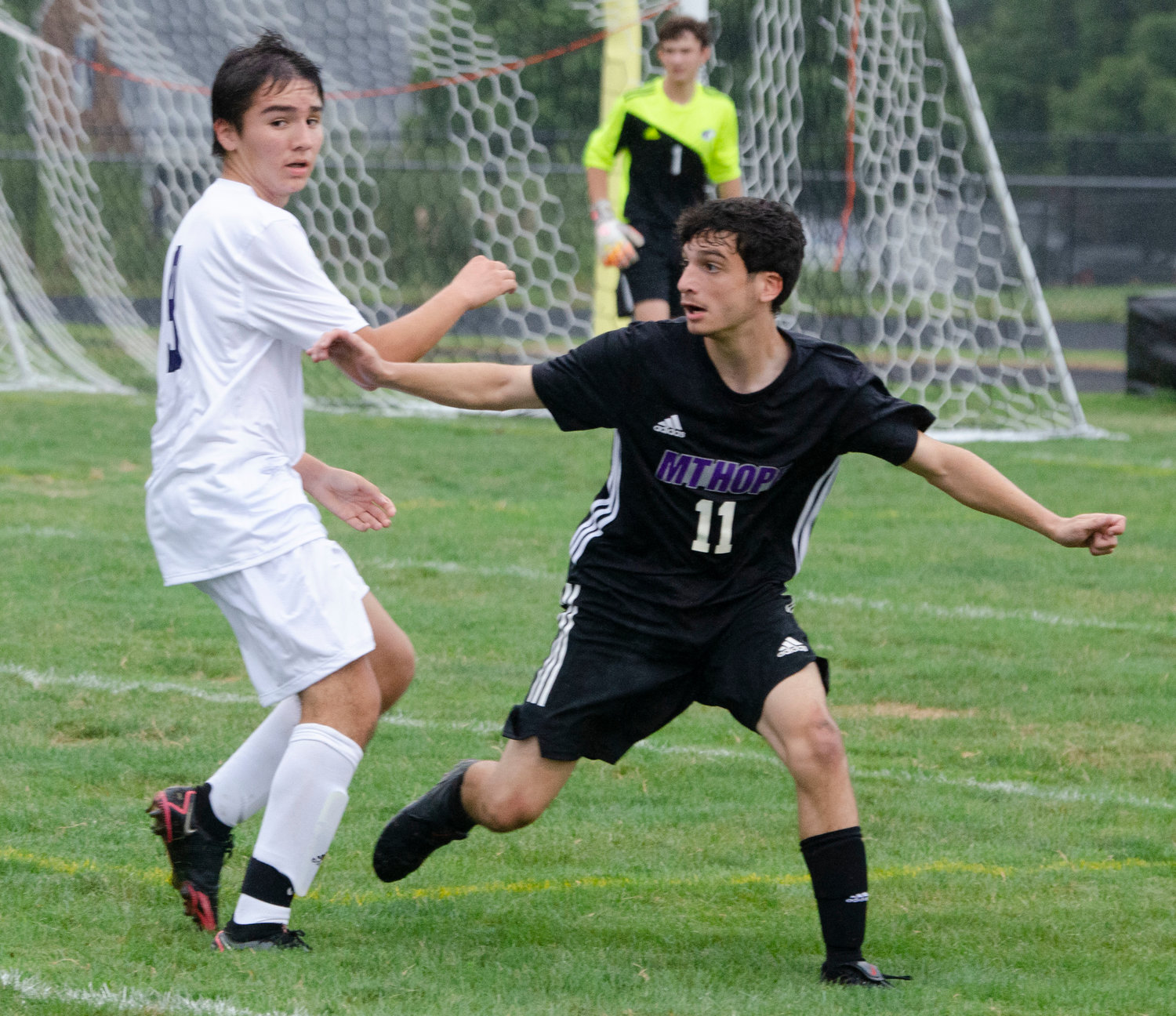 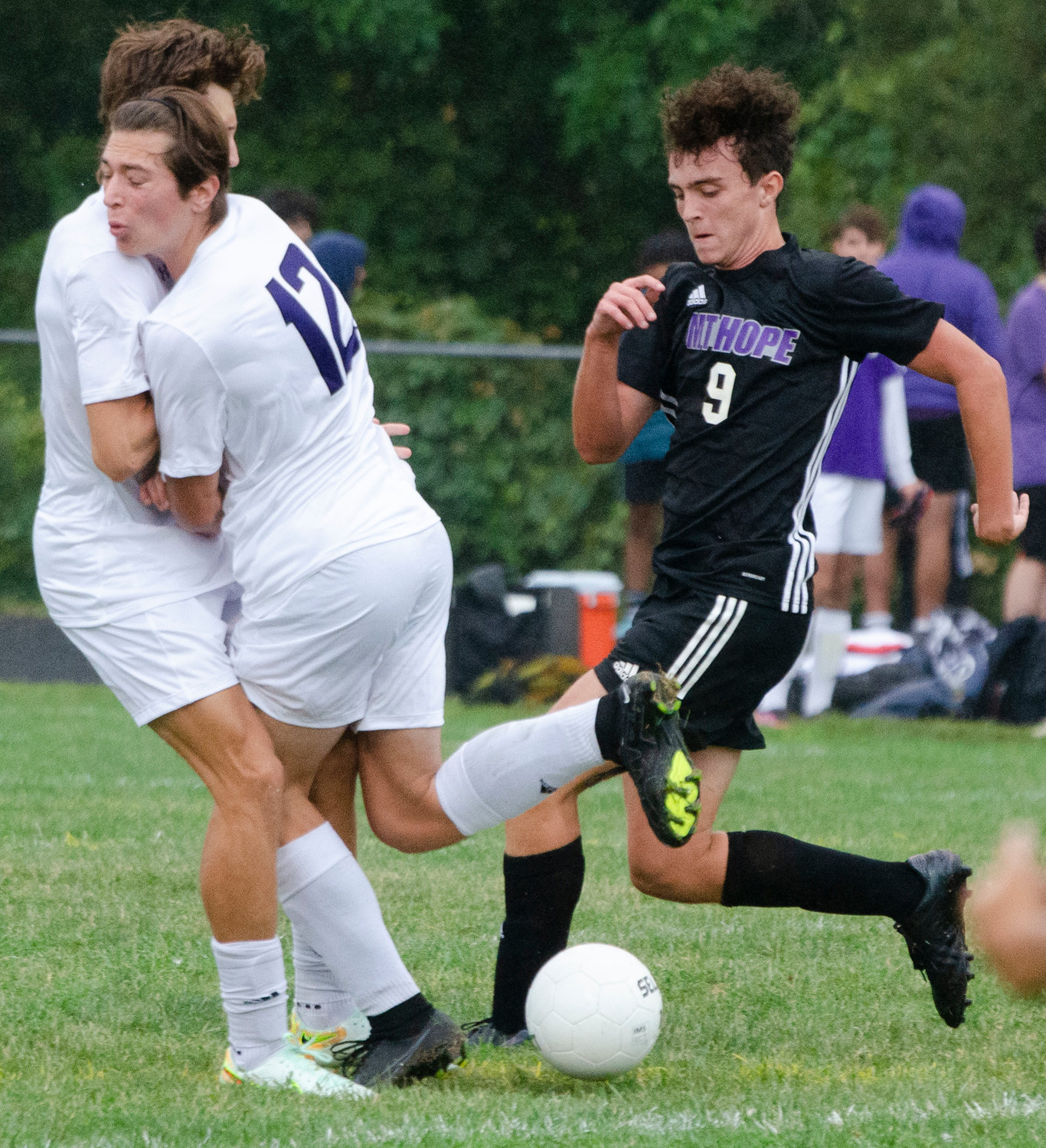 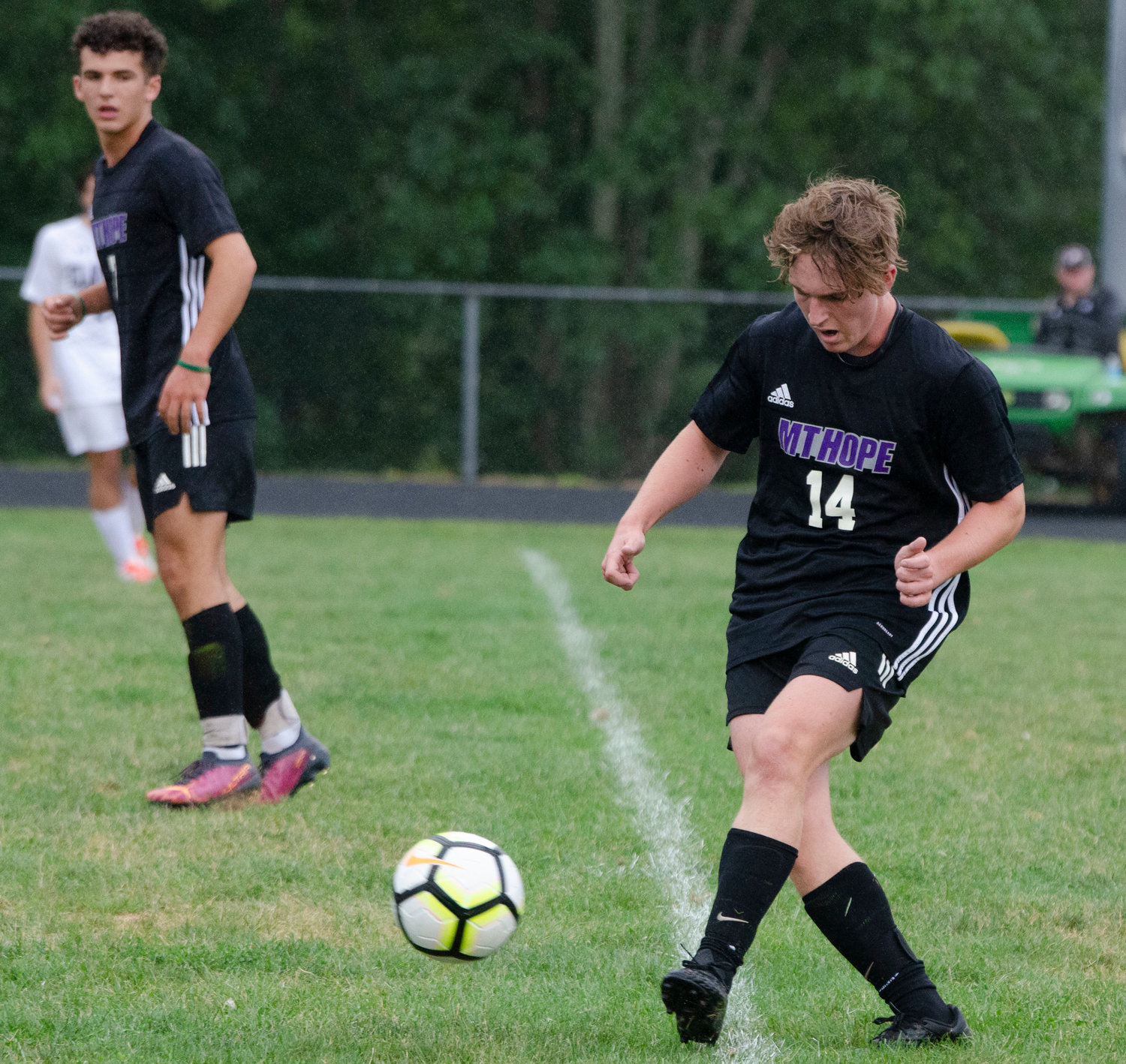 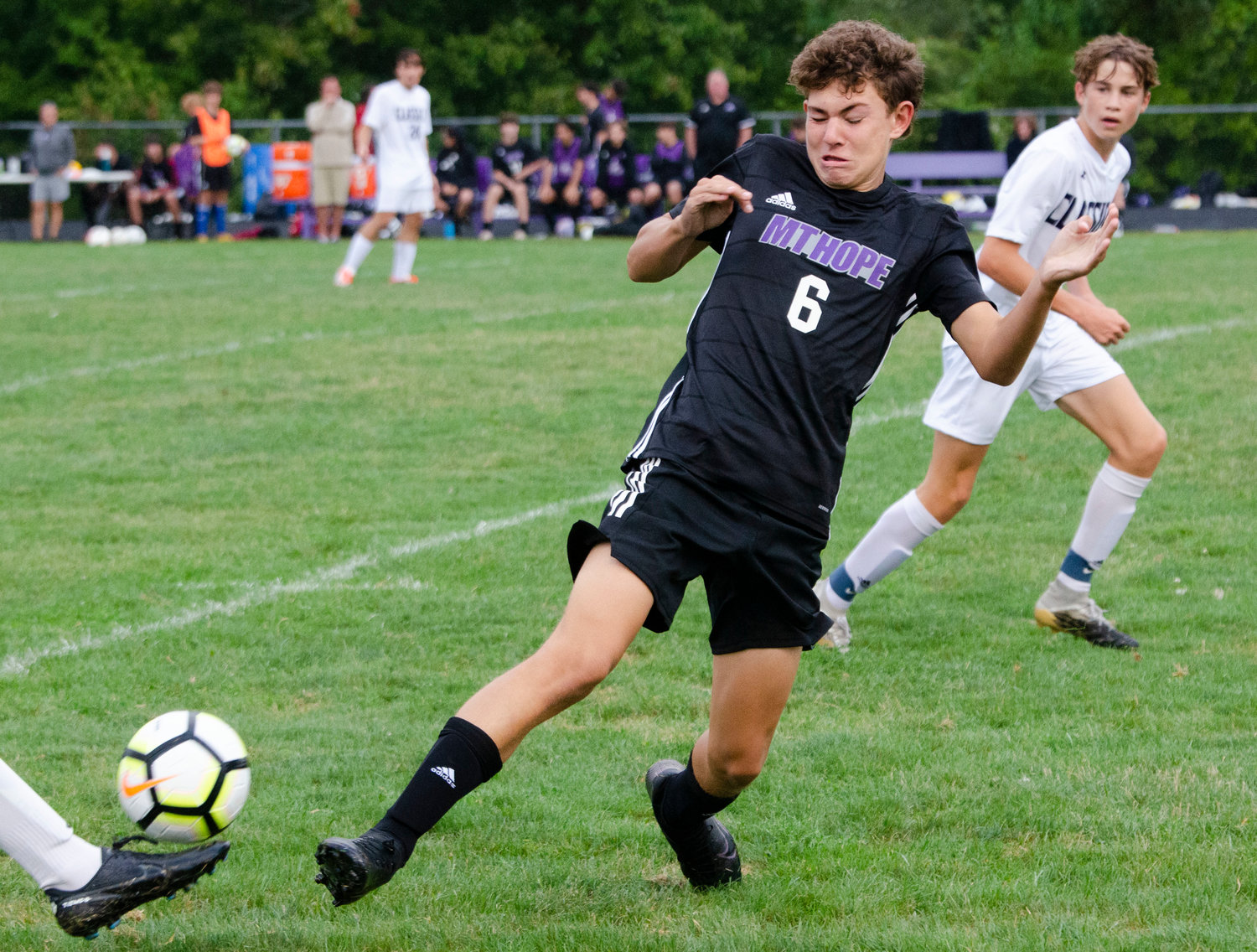 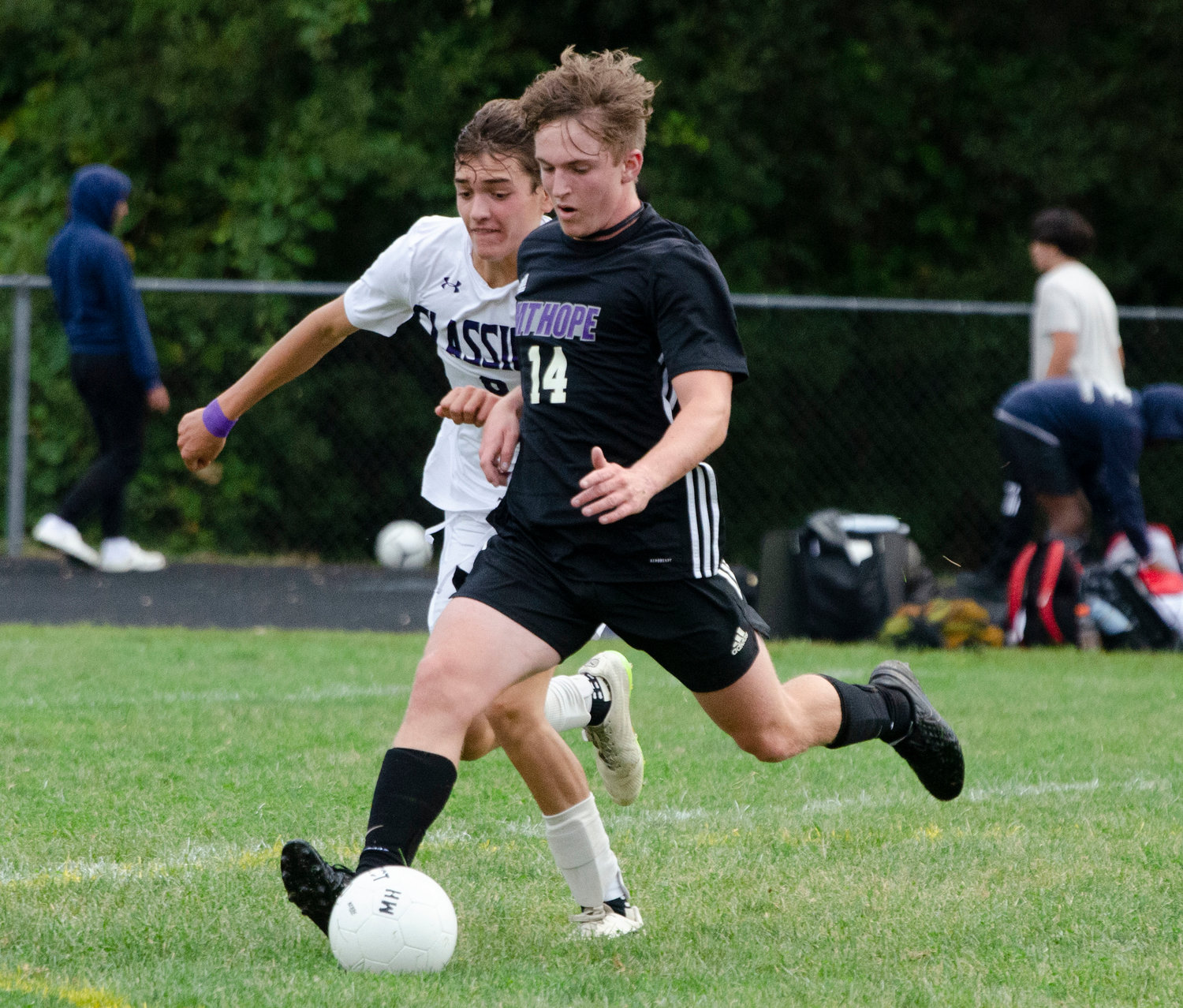 Senior defender Griffin Berardo clears the ball out of the Huskies defensive zone. 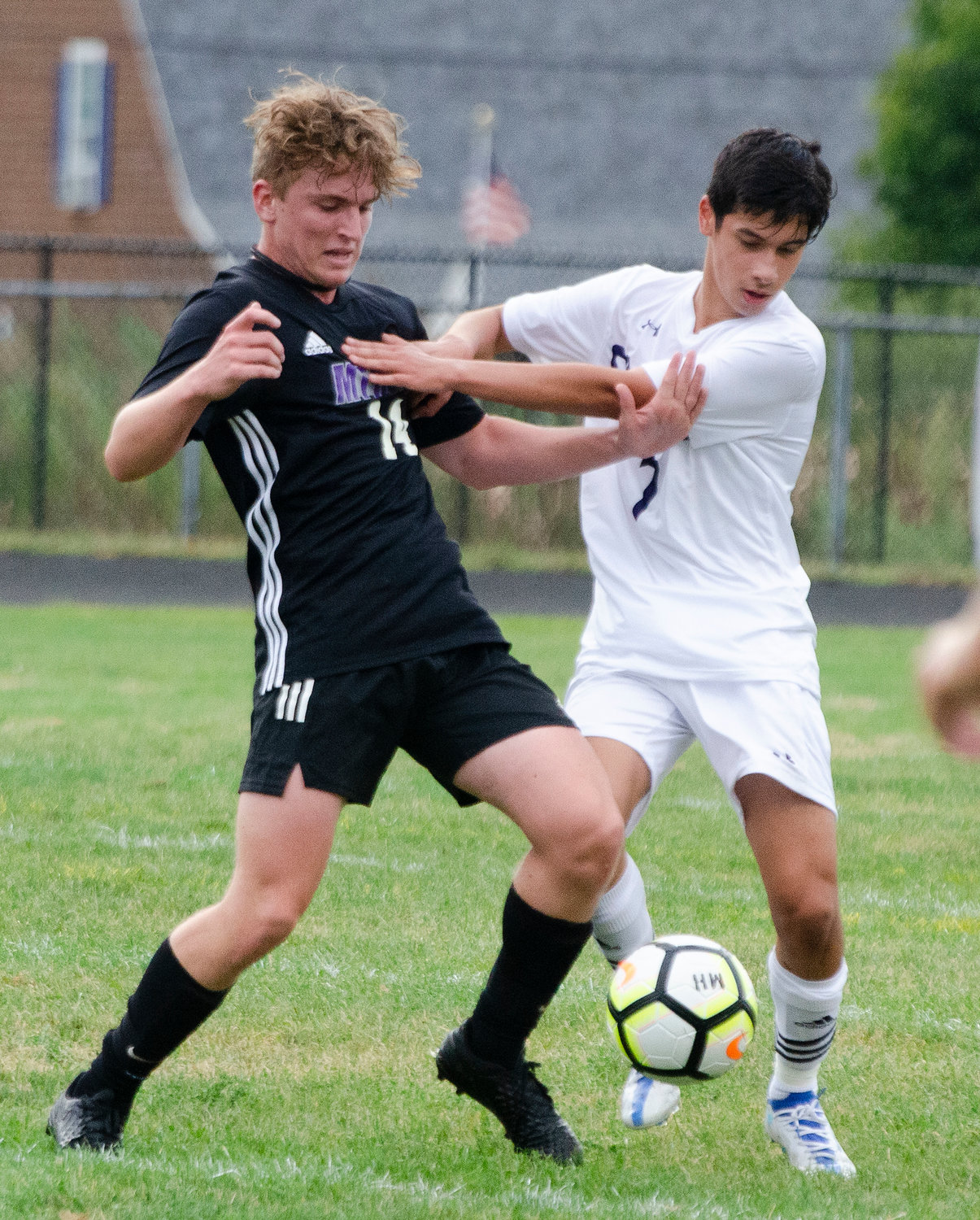 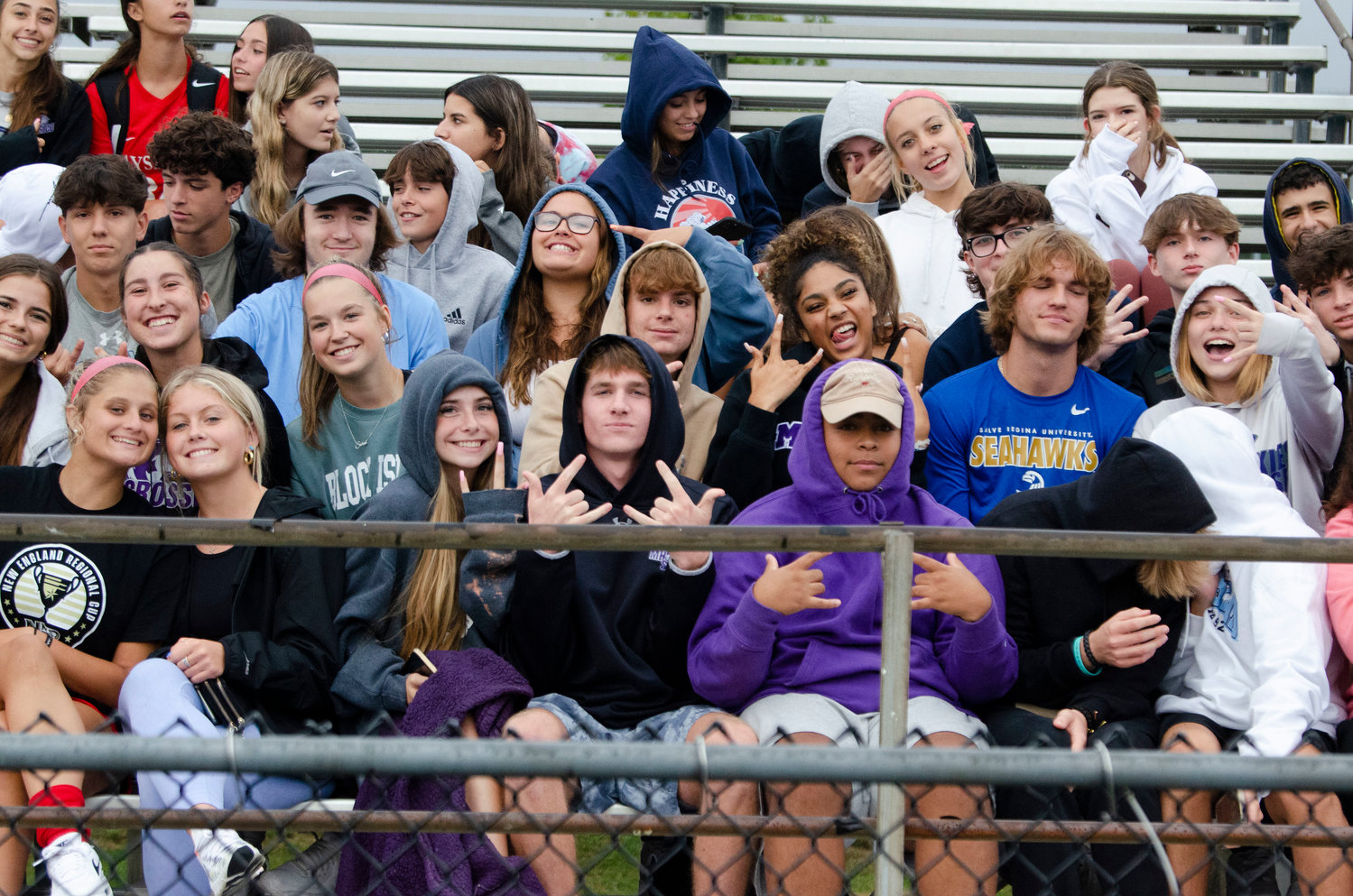 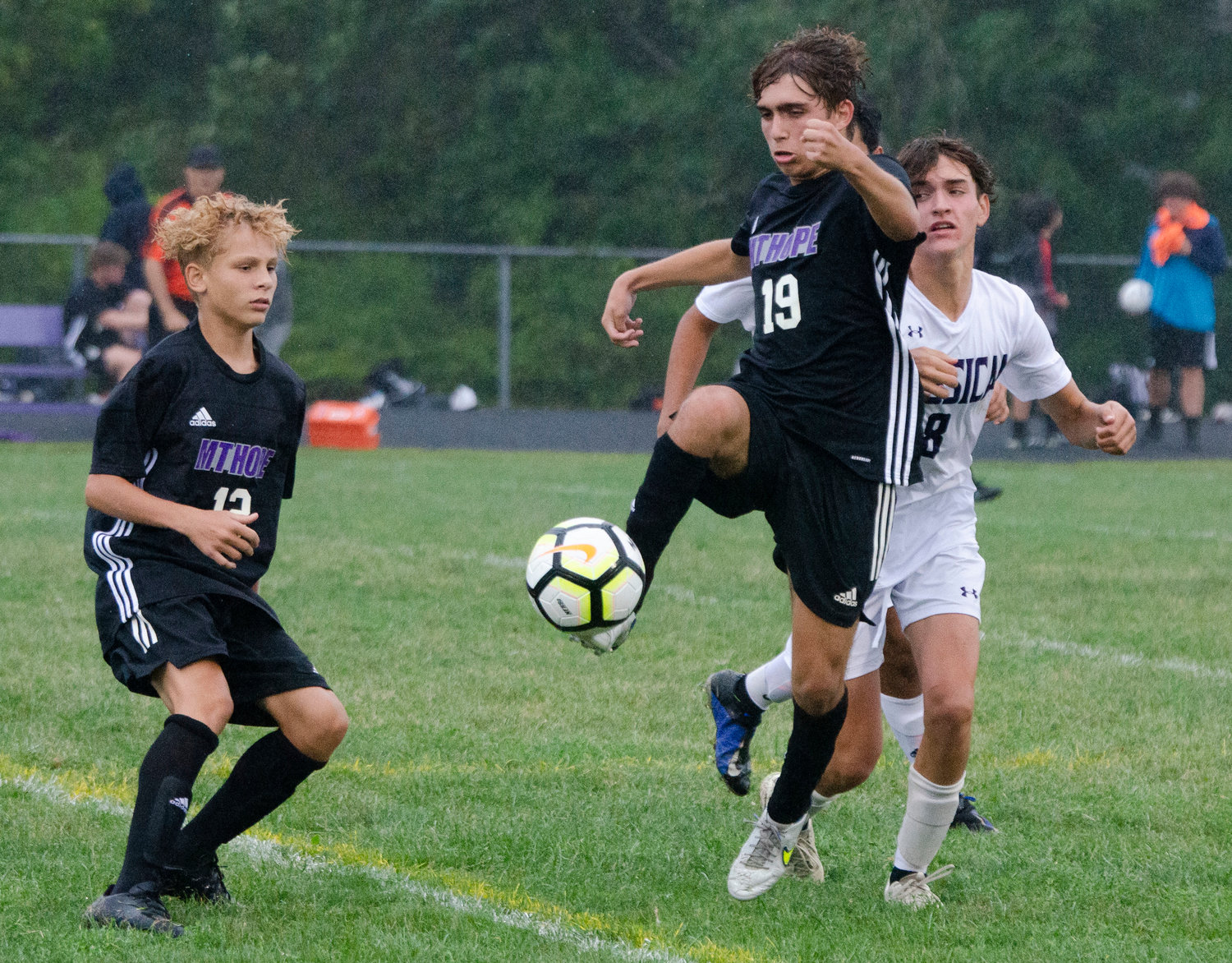 Freshman midfielder Aidan Hudak (left) looks on as sophomore midfielder Maddox Canario gets a foot on a throw in. 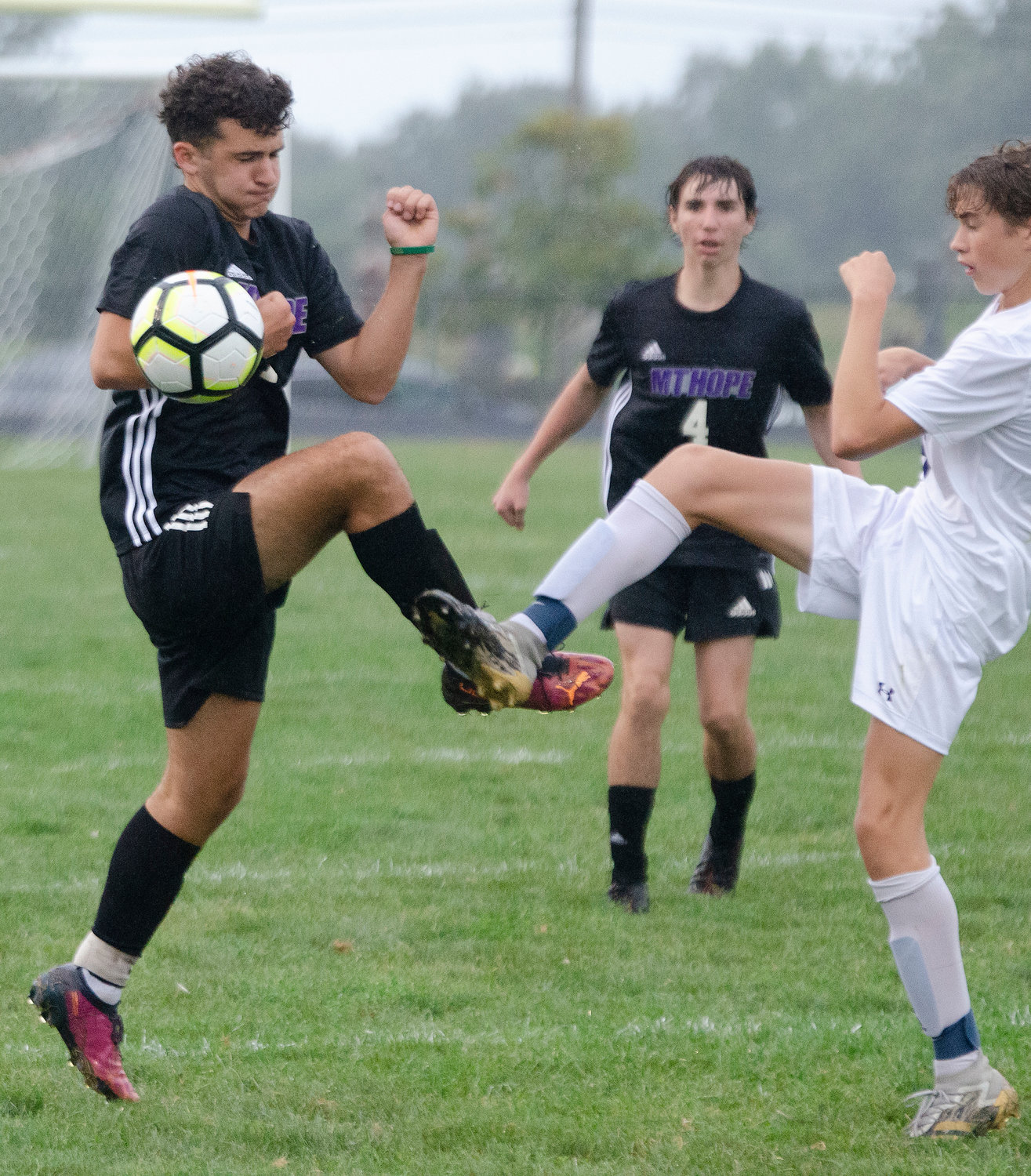 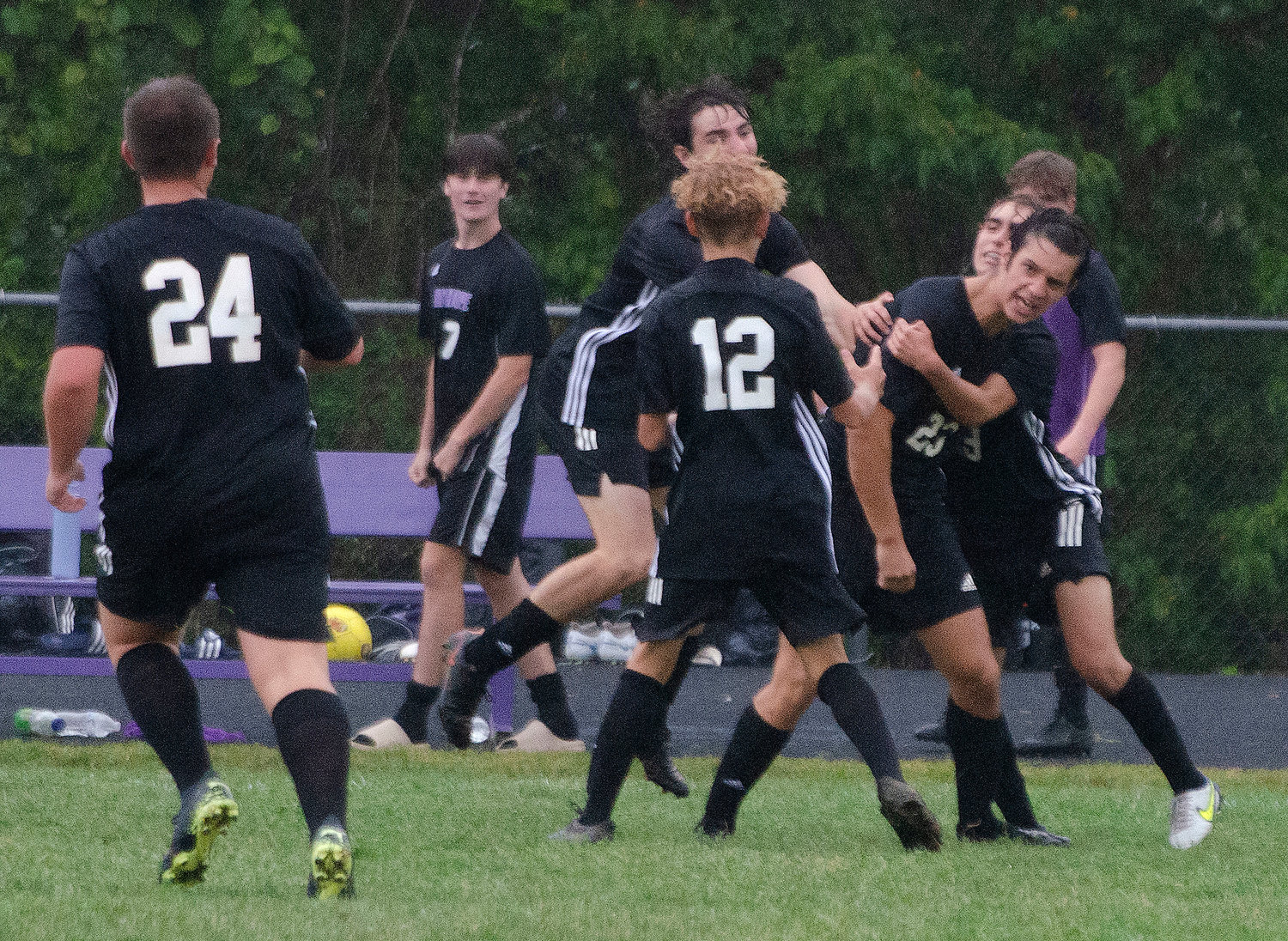 Teammates tackle Jesse Wilson after he scored and evened the score in the second half. 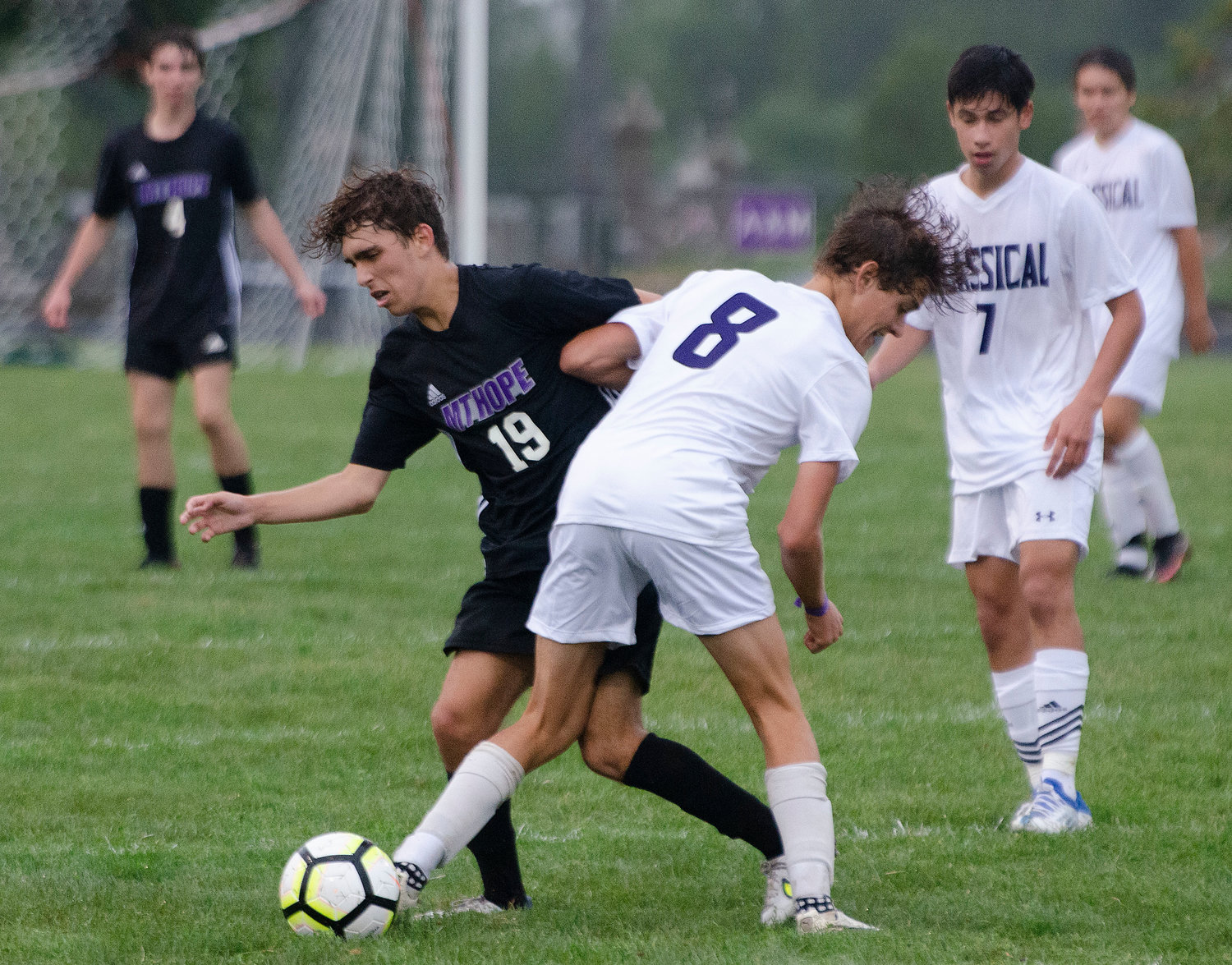 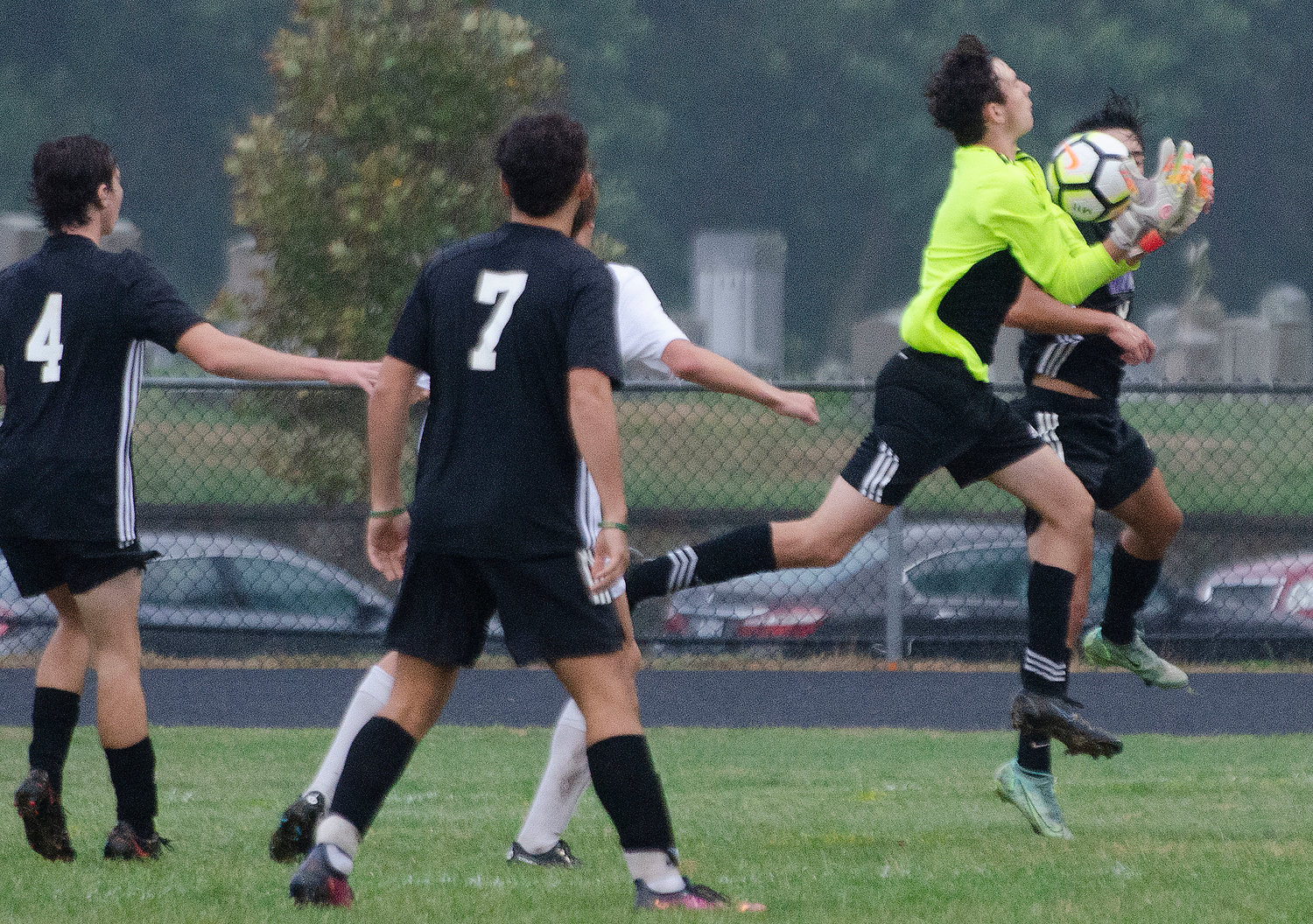 Freshman goalkeeper Evan Garies jumps into the scrum to grab a corner kick. 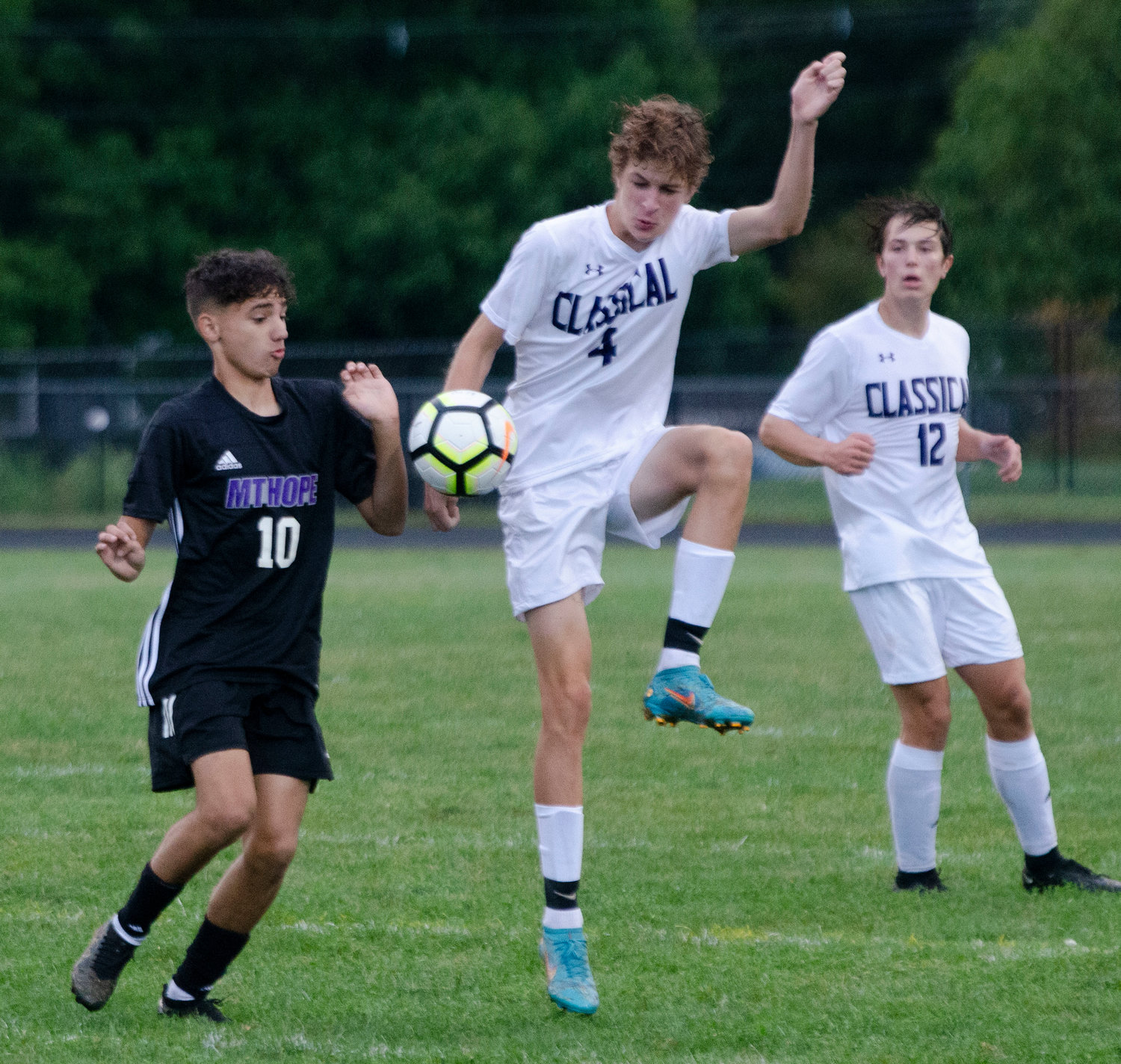 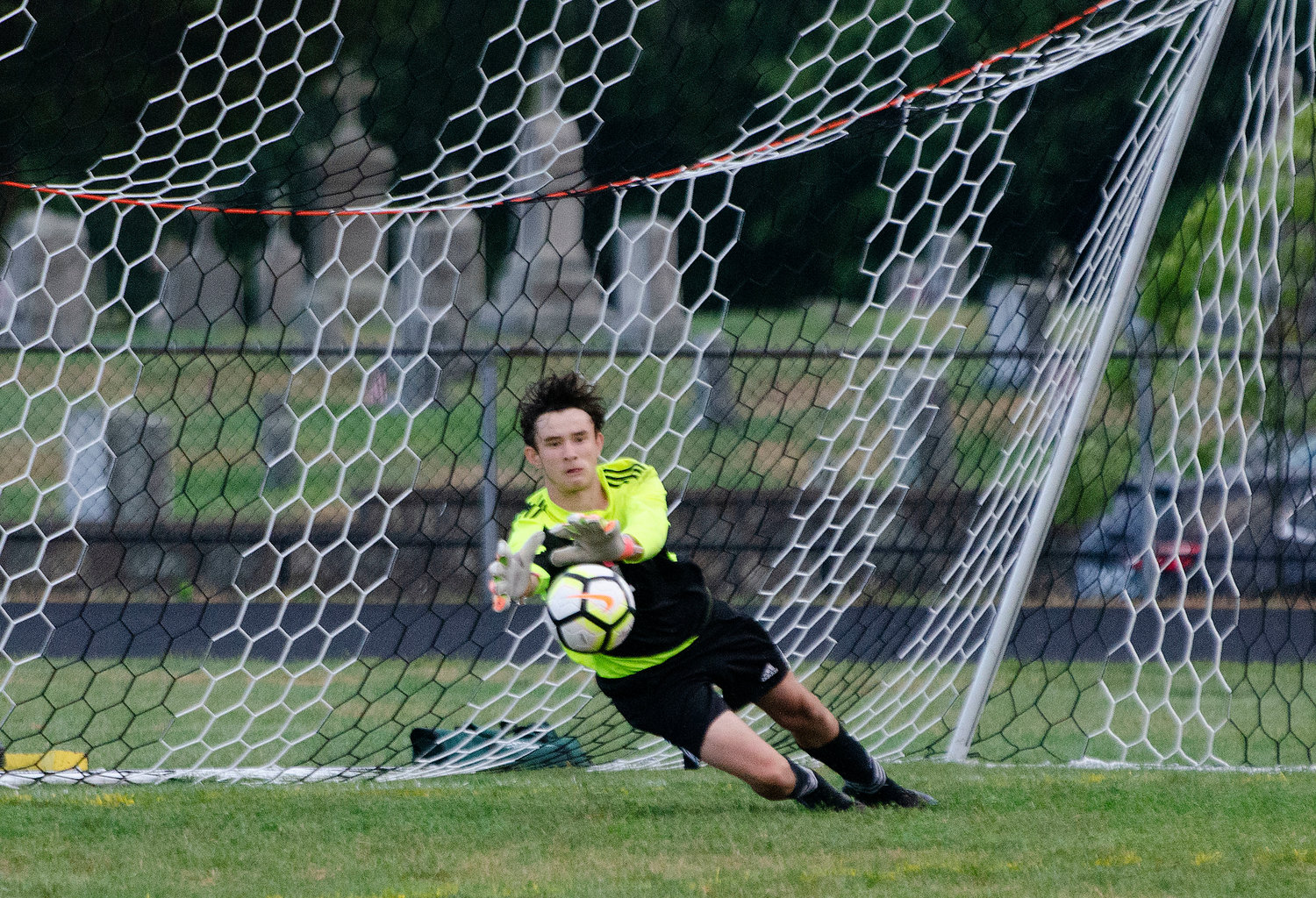 Freshman goalkeeper Evan Garies makes a diving save for the Huskies in the second half. Garies made seven saves during the game. 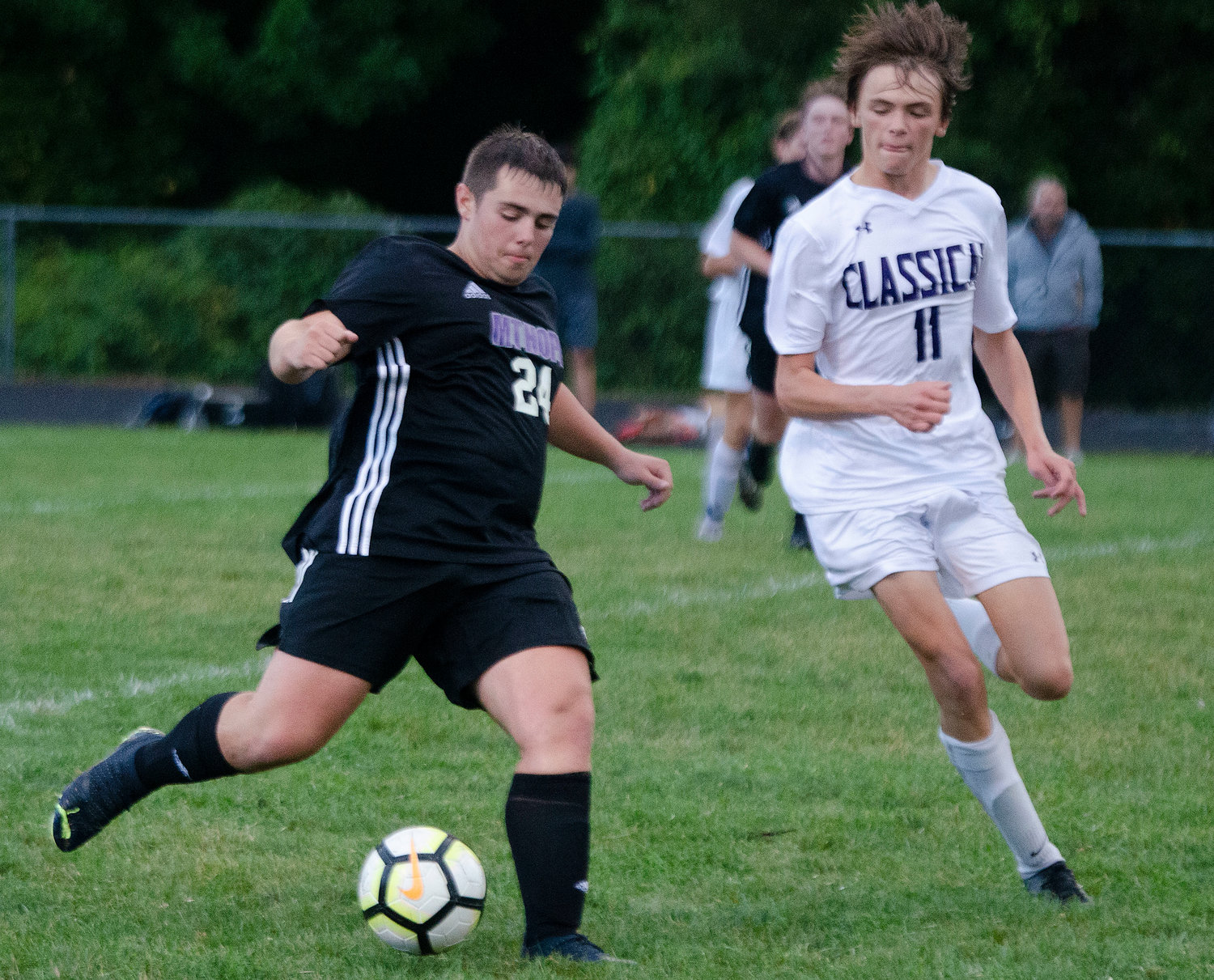 Junior defender Aidan MacDougall boots the ball upfield in the second half. 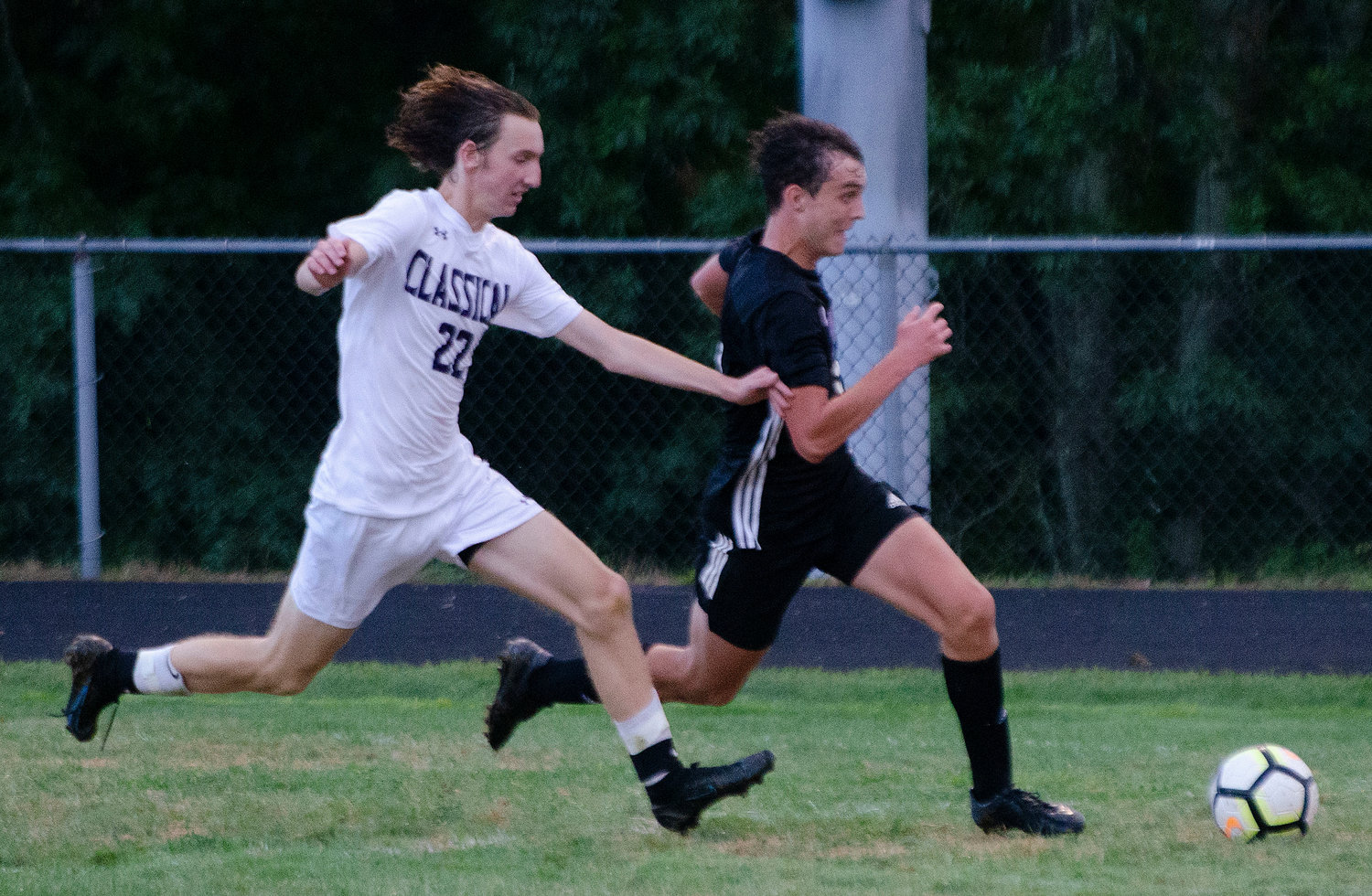 Striker Thomas Nencka sprints towards the goal with a Classical defender in tow. Nencka assisted on Jesse Wilson’s goal in the second half.
Previous Next
Posted Monday, September 12, 2022 6:43 pm
Story and photos by Richard W. Dionne, Jr.

The Mt. Hope soccer team suffered a heartbreaking 2-1 loss to Classical in front of a decent crowd despite a drizzly in the home opener on Wednesday night. The game looked to be headed for overtime, but Classical striker Chris Vargas beat six foot freshman goal keeper Evan Garies (seven saves) for the winning goal with 30 seconds to left to play. The Huskies are currently 0-1-1 in Division I, after tying Cumberland 2-2 in an away game on Saturday.

“We got a little too nervous. There was miscommunication and the ball popped over the goalie’s head,” said junior winger Jesse Wilson who scored the solo goal for the Huskies. “Counting down we should boot that ball out. It’s fine, it’s the first game of the season.”

“We are a young group, but I’m very excited about our potential,” said new head coach Gavin Ward, who replaced Alex Couto this fall. “We have some talented and creative players. We were a bit unlucky today. Sometimes you win. Sometimes you lose. Sometimes you draw.”

Vargas who scored both goals for the Purple, gave Classical a 1-0 lead in the first half. But the Huskies mounted a comeback when winger Jesse Wilson blasted a right-footed kick by Classical goalkeeper Louis Triaza to even the score 1-1. Huskies junior defender Aidan MacDougall started the play corralling a rebound at the goal mouth and booting the ball upfield to freshman midfielder Aidan Hudak. The midfielder then lofted a pass to striker Thomas Nencka who attempted to dribble through a pair of defenders. Nencka kicked the the ball out to his left as he was overtaken by the Purple.

“I saw Tommy coming in at a pace. The left back pinched in and squished him,” said Wilson, who sprinted up field and booted the ball by Triaza into the left corner of the net from 25 yards out.

The yellow cards came out in the second half. Play became chippy as both teams amped up to break the tie. Classical received four yellow cards including one to head coach Ryan Cafferty for speaking back to the referee. Mt. Hope received two.

The Huskies failed to capitalize on a pair of free kicks late in the game. On the second, Wilson lofted a beautiful chip to Parker Camelo who headed the ball toward the corner of the net. But Triaza made the save.

“I have every confidence if they show up in practice, listen and work hard, that we’ll have a very good season,” said Coach Ward. “I’m delighted to have the job and really like the student athletes that I have to work with.”

Coach Ward moved to the states from England in 2004 and has been living in Bristol since 2005. He was the head soccer coach at KMS when they won a state championship in 2014. He has had coaching stints at Tolman and St. Rays and teaches physical education in the district of Pawtucket. He has been a big fan of the team’s behavior since he arrived this fall. “It’s a big thing for me,” he said.

He played a bunch of soccer while in England and is bringing a different style of play to the Huskies program. “I wouldn’t comment on previous coaches styles of play. There is a validity in all styles in soccer, but the players might say that we are doing something different,” he said.

The Huskies were moved up to Division I by the RIIL this season, after losing to North Smithfield 2-1 in the Division II semifinals last year under Coach Couto.

“There’s been lots of big changes, I’ve got a big job on my hands,” Coach Ward said.

“He did not come from Portugal or Brazil,” kidded Coach Ward after the game. Garies who looks like he would make a good tight end for the football team is a freshman and played at Kickemuit Middle School last season. “He’s young, athletic and has a bright future,” Coach Ward said. “Most importantly, he’s a decent young man as well. I like the integrity he shows off and on the pitch.”