Six Pack is ready to be Bristol’s next brewery

Mark Papi has some experience opening a brewery. A year ago, he was brewmaster helping open Bristol’s first-ever brewery, Twelve Guns, located off Metacom Avenue.

About a mile away, he has …

Six Pack is ready to be Bristol’s next brewery 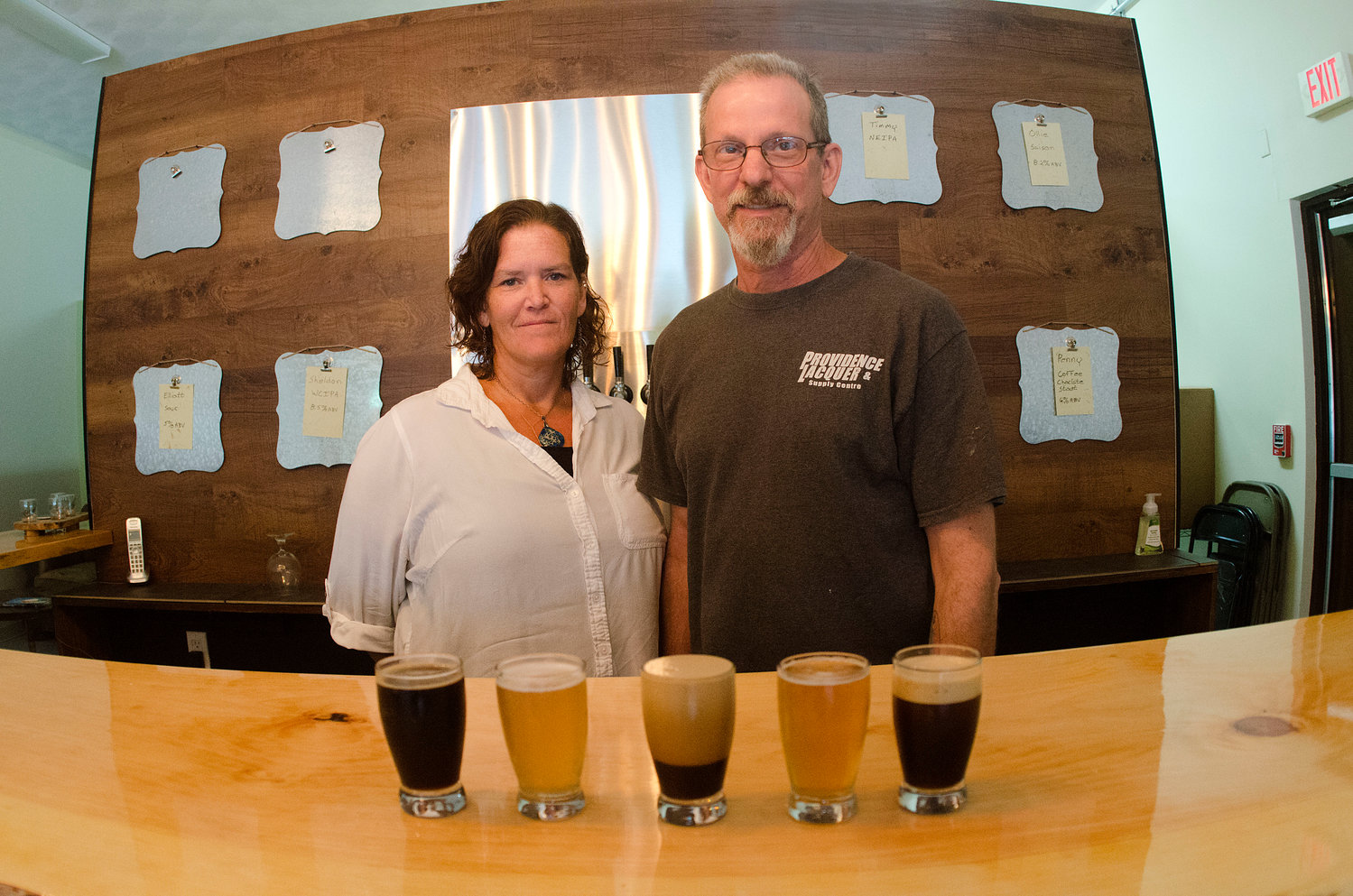 Kris Papi and Mark Papi have built the bar, decorated the space, set up their brewing system and brewed six different varieties of beer. All they need is a liquor license to open Six Pack Brewing.
Richard W. Dionne Jr. 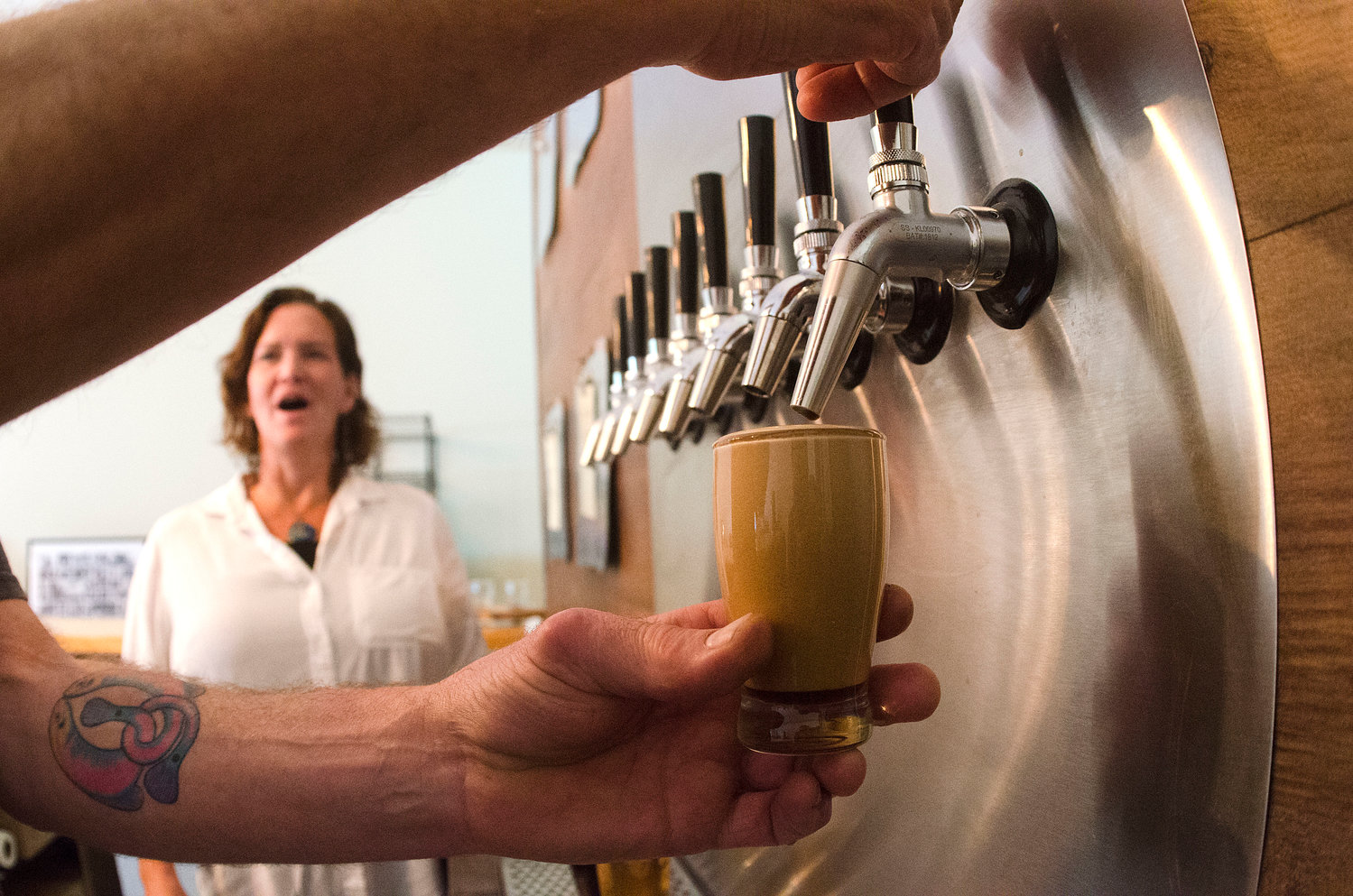 The Six Pack logo makes it clear that the business is named after the longtime couple’s six dogs.
Previous Next
Posted Friday, October 2, 2020 6:00 pm
By Scott Pickering

Mark Papi has some experience opening a brewery. A year ago, he was brewmaster helping open Bristol’s first-ever brewery, Twelve Guns, located off Metacom Avenue.

About a mile away, he has been hard at work getting Bristol’s second brewery ready to open, in a completely renovated space that once housed a dog-grooming business and sits two doors away from the popular Beehive Pantry on Gooding Avenue.

Six Pack Brewing has almost everything ready to open. Mark and his longtime wife and friend, Kris Papi — they’re no longer together, but they are sticking together as business partners and co-workers for this venture — have designed a casual and rustic space, literally built a bar, brewed five of the six beers they plan to open with, and navigated through all permits and approvals except one. They need a liquor license.

The license is expected at a public hearing at the end of October. If all goes according to plan and the brewery receives its state brewery manufacturing license, it will open to the public shortly thereafter.

“I’ve always wanted to do this,” Mark said. “I talked with Kris, talked with my kids, and after working at Twelve Guns, it seemed like now was the time.”

Though he helped develop many of the brews they still use today, Mark said with a laugh, “I didn’t give him all my tricks.”

Like many who get started in the craft-brewing industry, Mark has another job. The lifelong Bristol resident works at Crown Collision. He has been home-brewing for about a decade, and Twelve Guns was his first professional experience.

Having gotten a taste for it (pun intended), he’s excited to launch this new venture. Mark leads the beer-making; Kris leads the business. And because Mark expects to keep work at his primary job, Kris will be the most recognizable face when customers come to visit.

Kris has provided the vision behind the decór, which includes rough, hand-assembled tables, an eclectic mix of seating options, and that gorgeous handmade bar, assembled from two enormous pieces of sawn lumber.

If they get permission to open (and they expect they will, because they have not heard of any opposition), Six Pack will serve beer samples of 5-ounce or 12-ounce pours, to be consumed on the premises, as well as 16-ounce cans for sale. They will not be serving their own food, but they are hoping to form a partnership with the Beehive where they could sell some of their products in the brewery. They are also hoping to eventually schedule food truck nights, where a truck could park outside.

It’s all about the dogs

Everyone who hears the name of the brewery automatically assumes it has to do with a six-pack of beer. Once they see the logo — designed by Mark’s daughter — they understand the real meaning.

“The logo is based on our 20-year relationship,” Kris said. “We shared six dogs together. We love our dogs. Our dogs are our life.”

The most the family had at one time was four dogs, and they now have three — Sheldon, a beagle mix; Oliver, a chihuahua; and Penny, an English Mastiff Shepherd. As the logo conveys, they are not wedded to any one type of dog, as the others have ranged dramatically in size.

“Dogs are definitely welcome here at the brewery,” Kris said.

The Covid-19 pandemic has definitely altered Six Pack’s plans, as they could have been ready to open back in the spring, if not for health concerns and the economic shutdown. With indoor dining now permitted, they have set up the space with a scattering of tables distanced from each other, and they are not allowing seating at the bar (for now).

Both Kris and Mark say the Town of Bristol has been great so far. They needed Bristol Zoning Board permission for a special use permit, because their location is not zoned for manufacturing. They were nervous for their hearing, but they said the town’s reception was wonderful.

“The zoning board was happy about it, and the whole town has been very encouraging,” Kris said.