The phasing out of dedicated robotics classes at Mt. Hope High School in favor of what the administration sees as a more robust engineering curriculum has student and faculty proponents of robotics classes nervous about the change. 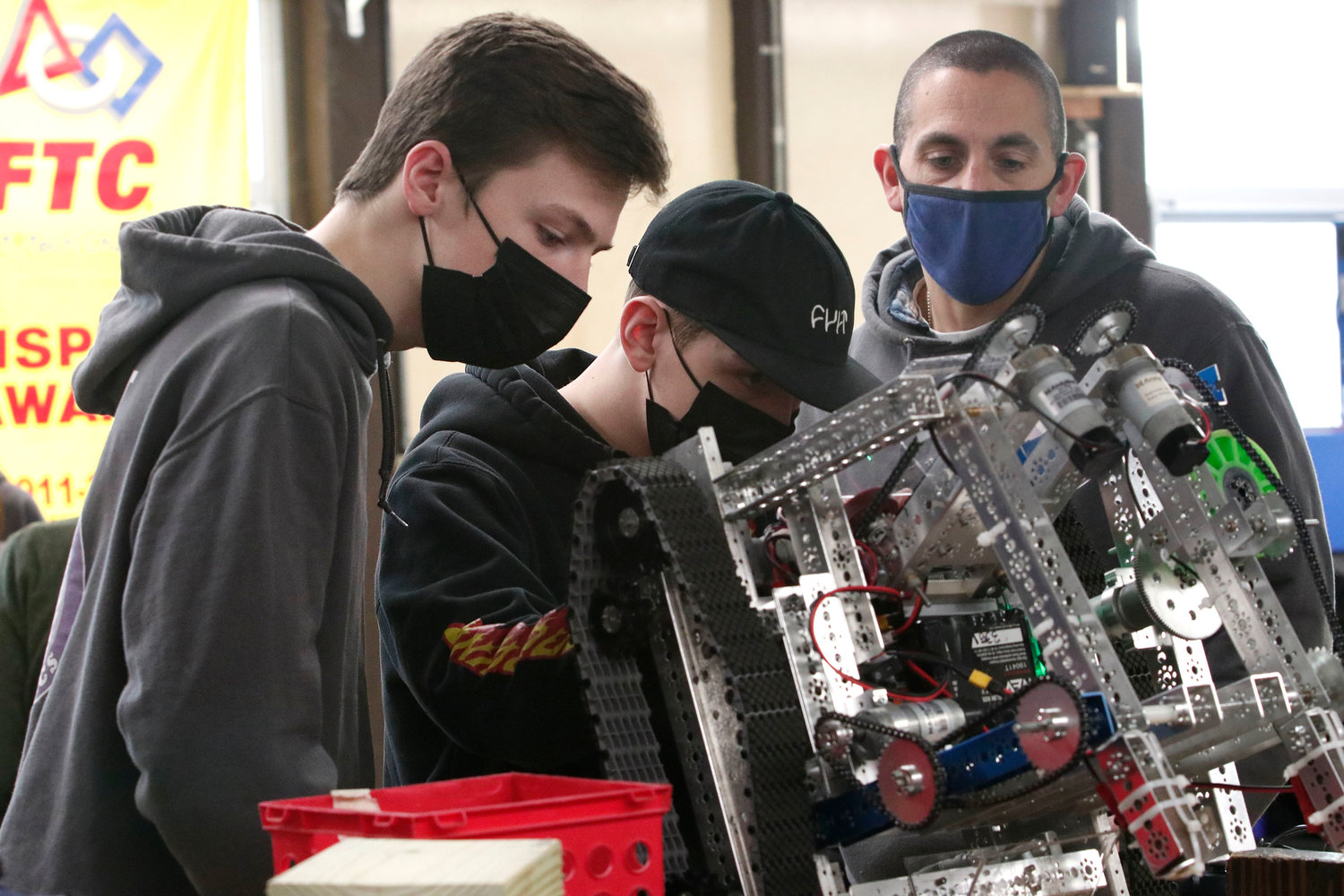 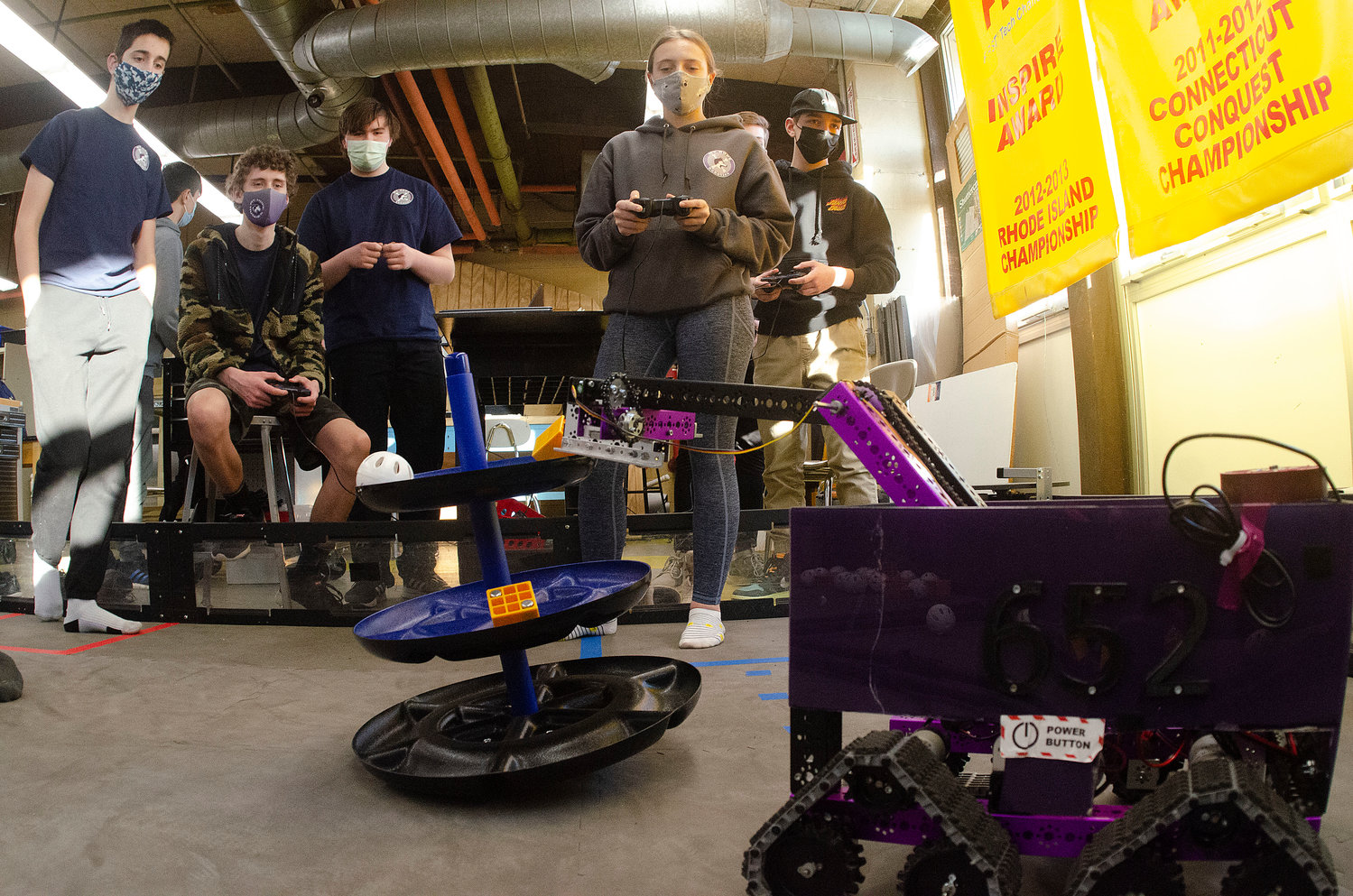 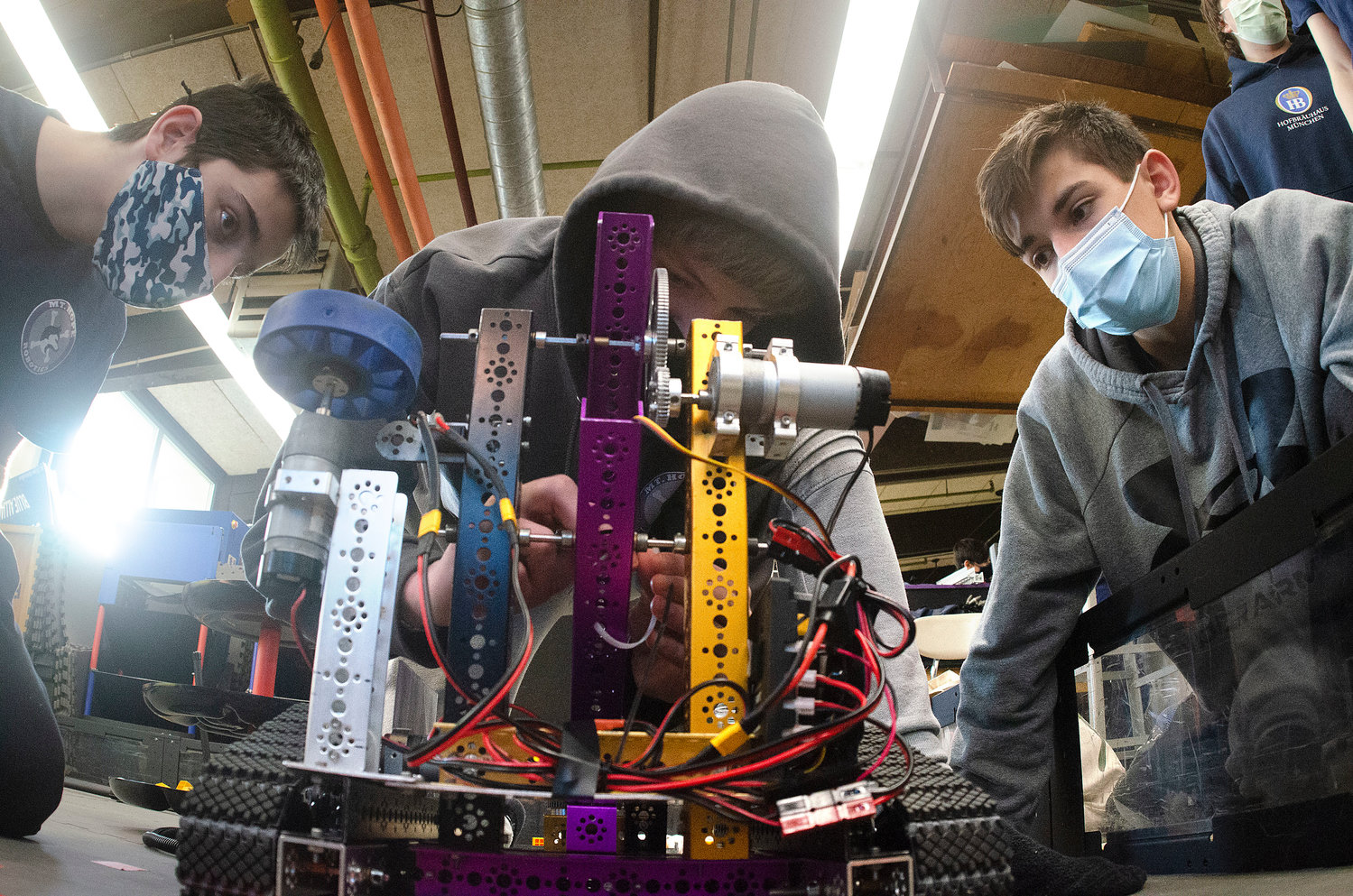 Michael Thibault and Chris Sousa repair their robot after a breakdown in the arena.
Richard W. Dionne Jr. 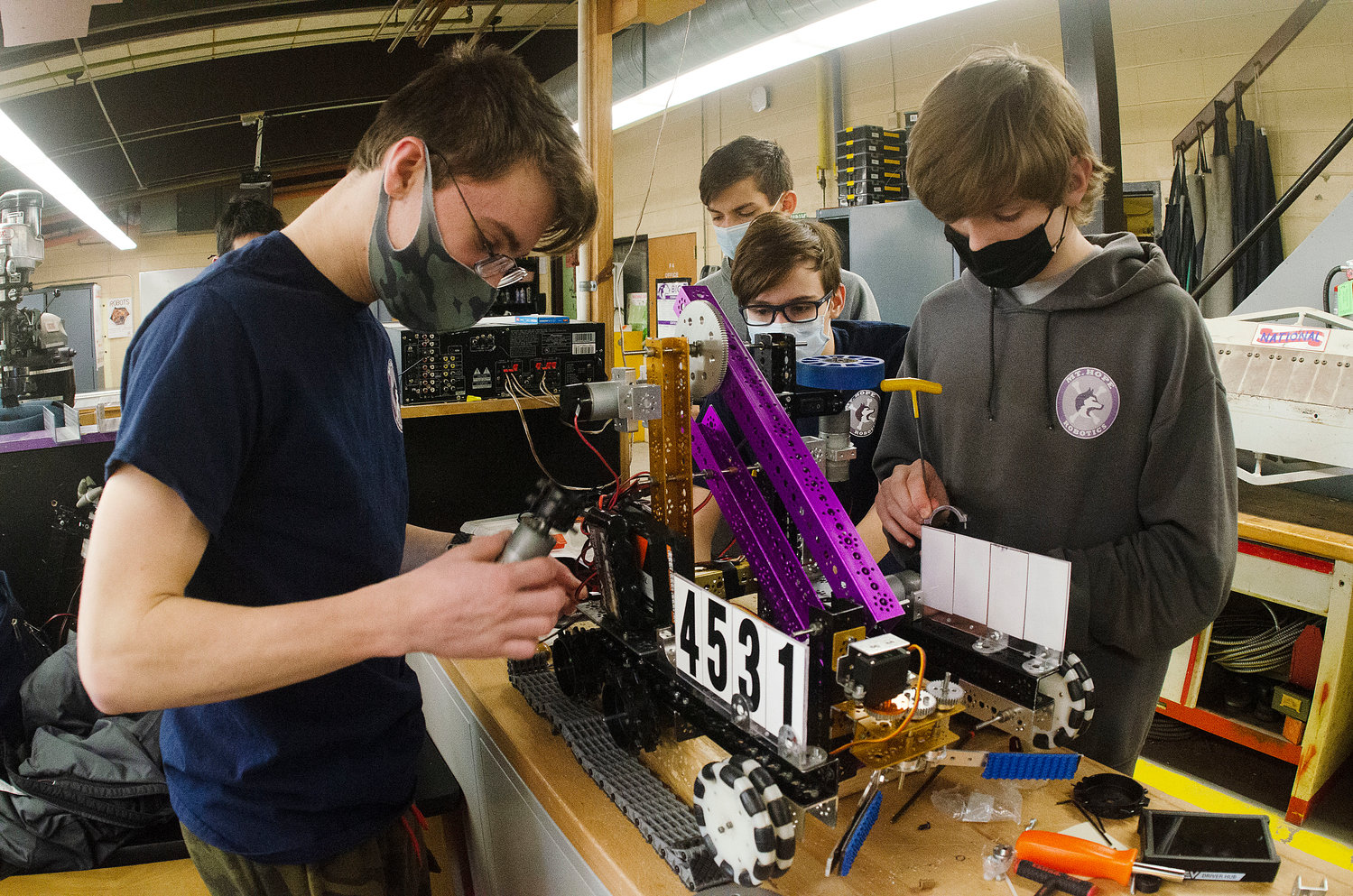 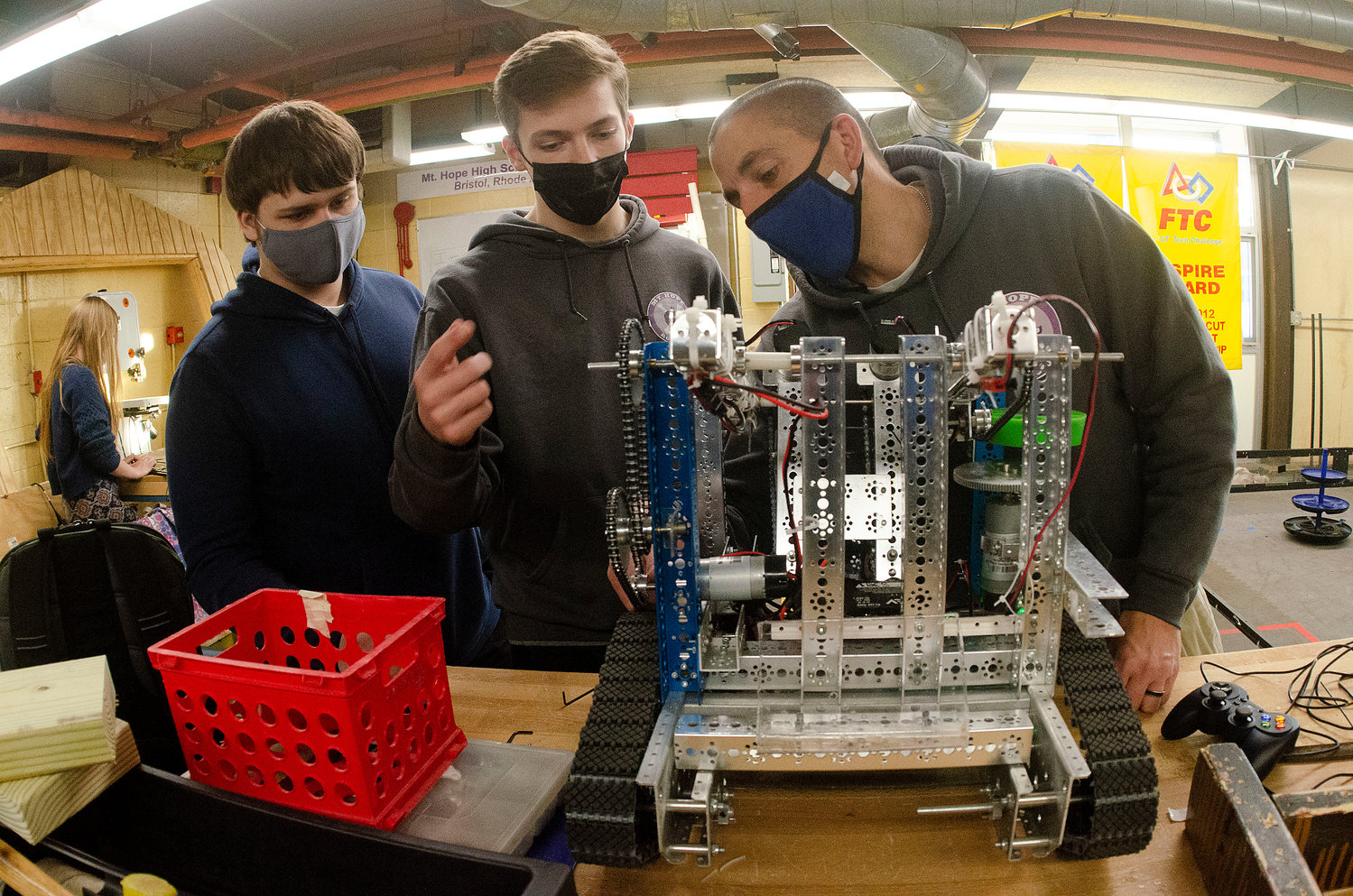 The days of having a dedicated robotics course in Bristol Warren are coming to an end, as the school’s administration — led by new superintendent Ana Riley — confirmed at Monday night’s school committee meeting during an overview of upcoming changes to student programming at Mt. Hope High School.

Students currently enrolled in dedicated robotics classes will still be able to advance on that track through to their graduation, but as of next year, Robotics 1 will no longer be offered. Instead, the administration is opting to include robotics within the larger scope of a CTE-approved curriculum called Project Lead the Way (PLTW), which incorporates various other applied engineering coursework in addition to robotics.

“Project Lead the Way incorporates robotics and goes deeper,” explained Riley, who oversaw the same curriculum during her tenure as superintendent of Portsmouth schools, on Tuesday morning. “It’s an opportunity for more rigorous standards around not just robotics, but other engineering principles.”

Riley said that the Project Lead the Way curriculum, as an approved CTE pathway, will open up more opportunities for those looking to pursue STEM careers through college, and improve necessary skills and proficiency for all students, even those not looking to pursue a post-secondary education.

“If they get the deeper understanding of robotics and engineering and learn how to apply it and take it to the next level, they can make it a part of their future endeavors,” Riley said.

Riley confirmed that the after school robotics club will remain an option for kids who want to dive deeper into robotics specifically.
“We want to keep our robotics club after school and continue to support that, but we want to make sure that, during the school day, students are getting those college and career readiness skills,” she said.

Riley said the decision to phase out dedicated robotics included multiple factors, including available funding and the overarching goal to improve student proficiency through more rigorous, omtpimized curricula. Also important was the fact that, in the current year, there were only 24 students enrolled in all four levels of robotics courses offered at Mt. Hope, throughout all four grades.

Robotics provides ‘lifeline’ for some kids
Prior to the school committee meeting, the robotics room at Mt. Hope High School was vibrant with enthusiasm on Monday afternoon.

Student members of the robotics club hurriedly made adjustments — code-based and tool-based — on their mechanical creations, which will finally be pitted against other secondary schools during their first in-person competition since COVID began, this upcoming Saturday in East Providence.

“Over half the kids here have never been to a real, in-person competition,” said robotics head coach and teacher Ryan Garrity, who started the robotics club about 16 years ago. “It’s taken a lot more lightly until they go to their first competition. Then the ‘A-ha’ moment goes off in their heads that this is even cooler than they originally anticipated, and they want to be an even bigger part of it, or share ideas that they have.”

As competitors in the FIRST Tech Challenge, the third highest of four levels within the FIRST (For Inspiration and Recognition of Science and Technology) robotics league, the students will have the opportunity to compete in qualifiers for the state championship, and then the chance to qualify for the world championship following that. The team qualified for worlds last year but those hopes were dashed when the event was turned remote due to COVID.

It doesn’t matter if you speak to a coach, teacher, or a student participant — the benefits of robotics in school is clear.

“It’s the little things that you learn — like how to use hand tools and how to communicate your ideas and present them to other people — and the other things that build up on that,” said senior Alice Grantham. “You don’t realize how important it is until you learn it.”

Grantham is the most tenured member of the club and has been doing robotics work since sixth grade. She skipped past the introductory robotics course upon entering Mt. Hope and was seated alongside sophomore students as a freshman. Now, as her classmates have graduated, she is a team leader and mentor who helps organize and oversee tasks for fellow club members.

Grantham said that she will be attending Worcester Polytechnic Institute in the fall and looks to study biomedical engineering. She hopes to work in prosthetics and orthotics or in medical devices in general. She said that the robotics curriculum has given her skills and confidence that she never would have gained outside of participating in classes and the club.

“I think it provides so much for people. So many skills, so many opportunities,” she said. “I don’t think I would be going to the school that I am if it wasn’t for this. It’s not just that. It’s something to look forward to at the end of the day and makes going through school worth it. It makes you feel really good about yourself after you see what you’re able to build. I never thought I would be able to do something like this.”

For Marny Kindness, assistant robotics coach and mother of a junior in the robotics club, the positive influence of robotics has been something special to witness.

“There’s this huge community and camaraderie that builds over the year. They were not this friendly and engaged with each other at the beginning. So it really builds lifelong friendships, which I think is so special to see,” she said. “You know how theater is a lifeline for some kids? Robotics is definitely a lifeline, too, for kids that don’t fit into other things.”

Change creates trepidation
Garrity, who was recently informed of the shift away from dedicated robotics, views the change hesitantly. He has seen over the years how beneficial a dedicated class, supplemented by participation in the after school club, has been for students. Many of them, he said, have gone into engineering fields, including many into the robotics field.

Garrity said that during the early years of the club, when there was no dedicated robotics courses, it quickly became apparent that supplemental education within the school day would be necessary.

“In the first year we put in something like 100 hours in five weeks and I thought, this is crazy, we need this during the school day,” he said.

“After going through the college application process, I can attest to the fact that participation in FIRST means a lot more on applications than participation in PLTW does,” Grantham said. “For those of us who are taking different paths and planning on attending college, we’ve learned so many important life skills in robotics that don’t come across the same way in PLTW classes. It’s more than just going there and building a robot.”

“While PLTW courses do allow students to learn more about the engineering and the design process, it prevents them from executing their ideas,” said Michael Thibault. “They are restricted to the confines of the curriculum, and for those who are pursuing higher education, they are unable to gain the skills they can bring to the workforce. Robotics in general gives the students the opportunity to collaborate and work with their fellow students towards a common goal.”

“Without the class, this program physically can’t run,” Grantham warned.