Members of the Tiverton Town Council on Monday night directed the town solicitor to look over a proposed resolution that, if passed locally and sent to the Rhode Island General Assembly, could give … 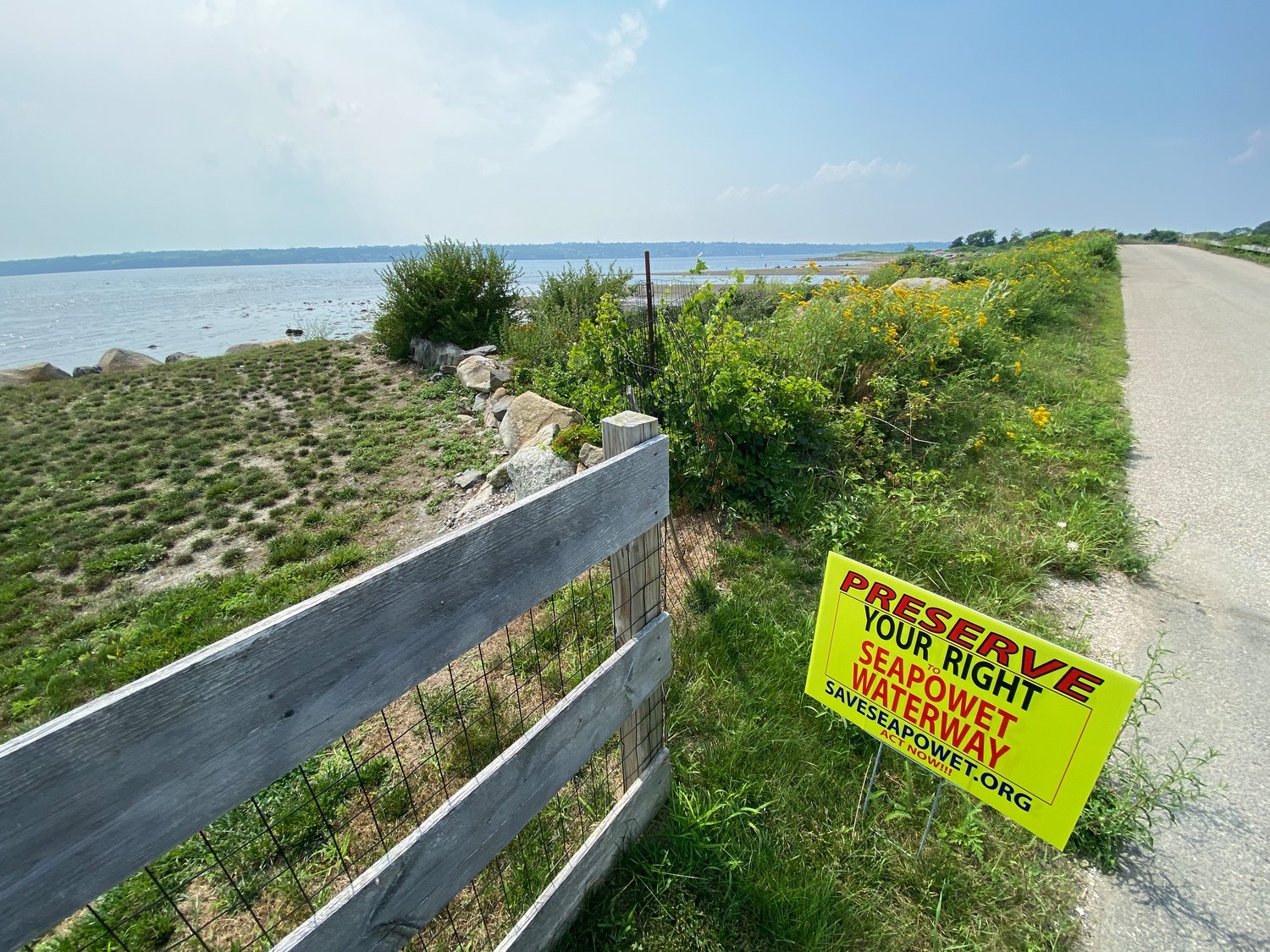 Seapowet area residents opposed to two oyster farms off their shores have mobilized in recent weeks, planting hundreds of signs, launching a website and raising more than $12,000 to cover legal fees.
TED HAYES
Posted Wednesday, July 28, 2021 8:46 am
By Ted Hayes

Members of the Tiverton Town Council on Monday night directed the town solicitor to look over a proposed resolution that, if passed locally and sent to the Rhode Island General Assembly, could give residents more time to respond to controversial aquaculture proposals than state regulations currently call for.

The proposed resolution was put on the agenda by councilor Jay Edwards, who said the way the state Coastal Resources Management Council conducts business, specifically in the case of two current oyster farm proposals — one south of Seapowet Point, one north of it — has caused legitimate cause for concern here. Those opposed to the farms only heard of the proposals until they were well along in the CRMC approval process. And that's not right, he said.

"There's not a lot that the town can do other than send a message to the legislature, the governor, the CRMC, about how we feel about it," Mr. Edwards said.

However, "my focus is more on the fact that we feel that notification is lacking. People who are impacted directly by this aren't notified directly; they sort of have to find out. My intent is to change the rules a little bit so that the CRMC would be required to notify the town directly as soon as they get a permit application, not later on in the process. That gives us time to look into it (and) it gives abutters time to react to it, and gives the public in general time to make comment."

As the general assembly is not in session and won't be until January, the resolution would likely not affect the two proposals for south and north Seapowet, he said. "What this will affect is the future, which is the crux of my argument."

The "lack of transparency" from CRMC has not been helpful in the fight to keep Seapowet clear, said Jeanne DeSouza, whose home lies just south of the bridge, directly onshore from where the Bowen oyster farm plan would be built.

Submitted by Little Compton brothers John and Patrick Bowen, the application seeks permission from the CRMC to place a .97-acre, 200-cage oyster operation in an area currently favored by fishermen and kayakers.

Though the plan was presented more than a year ago — the other, north of Seapowet, was submitted in January and is not as far along — Ms. DeSouza and her neighbors only heard about the Bowen plan recently as, unlike local zoning and land use issues, abutters are not notified directly by CRMC of proposals that may impact them.

"Our point all along was, we felt like we're jumping in at the 11th hour trying to protect this public space. But we're not against (oyster farmers) making a living."

The Bowen plan was expected to come to a CRMC vote in late June, but opponents, including Ms. DeSouza, asked for and received a delay. There is no scheduled date for CRMC to reconvene on the matter, and with the resignation this week of the CRMC's director, Ms. DeSouza said she does not know when it will be held.

But the extra time has given her and local allies a chance to regroup, and a full court press is currently on to add their thoughts to the record and mobilize for when CRMC reconvenes. In recent weeks, opponents have started a website, printed out two runs of 100 lawn signs each, and started a gofundme page to pay for the legal services they expect they'll need to hire representation and present witnesses to plead their case. At last count, the drive had raised $12,400.

In addition, "dozens" of residents have recently filed comments with the CRMC, saying in many cases that while they are not opposed to aquaculture, farms need to be placed in areas that do not impact property owners and infringe on the public's right to enjoy the water. Ms. DeSouza said opponents have also asked that the CRMC send the project to committee, which would give those opposed another opportunity to state their case before the CRMC before it comes to a final vote.

"We're hopeful" the request will be granted, she said.

At Monday night's meeting, councilors also suggested that the town's harbor management plan could be a good tool in helping the town control its destiny with respect to offshore farming.

Harbor commission chairman Bruce Cox, the town's representative to CRMC, said the commission was in the midst of updating its harbor management plan just prior to the Covid epidemic, and has not yet resumed in-depth discussions on it. But when it does, he said, there will be discussions on aquaculture and offshore land use.

Still, he said, local attempts to get the state to change might be a tough sell.

"I agree with you, (more transparency and deference to local wishes and regulations) should be there. But it's not going to happen overnight. the CRMC and DEM are both very zealous advocates of their authority and their power, and that's part of the problem."

Still, he said the council's proposed resolution is a good, and needed, step:

"It is a difficult issue," he said. "I'm glad you're doing that. That's something we've been rapping heads about (and) I applaud you for that effort, quite honestly."