As one of the capitals of the boatbuilding and yachting world, Bristol has produced some legendary sailors, from Nathaniel Herreshoff to Charlie Enright — and hosted many, many more. None has a … 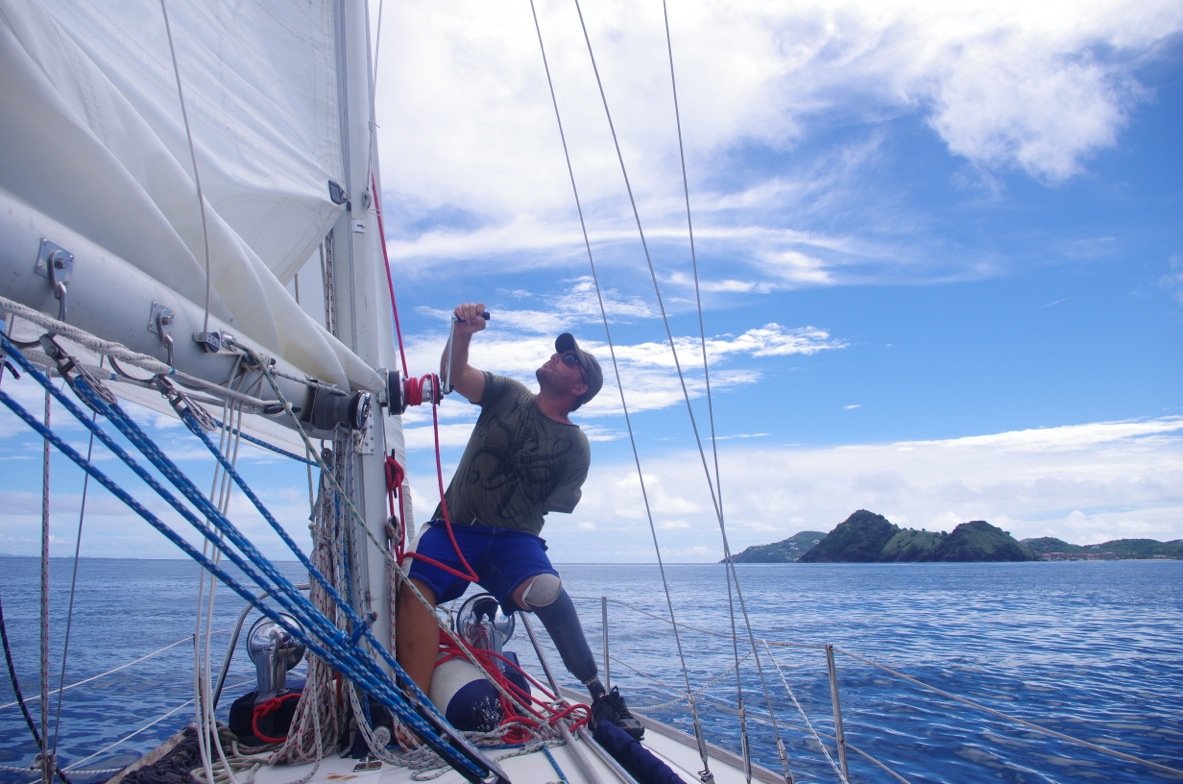 Dustin Reynolds, double amputee and around-the-world sailor, is docking in Bristol for some repairs and rest, before setting off again on the high seas. 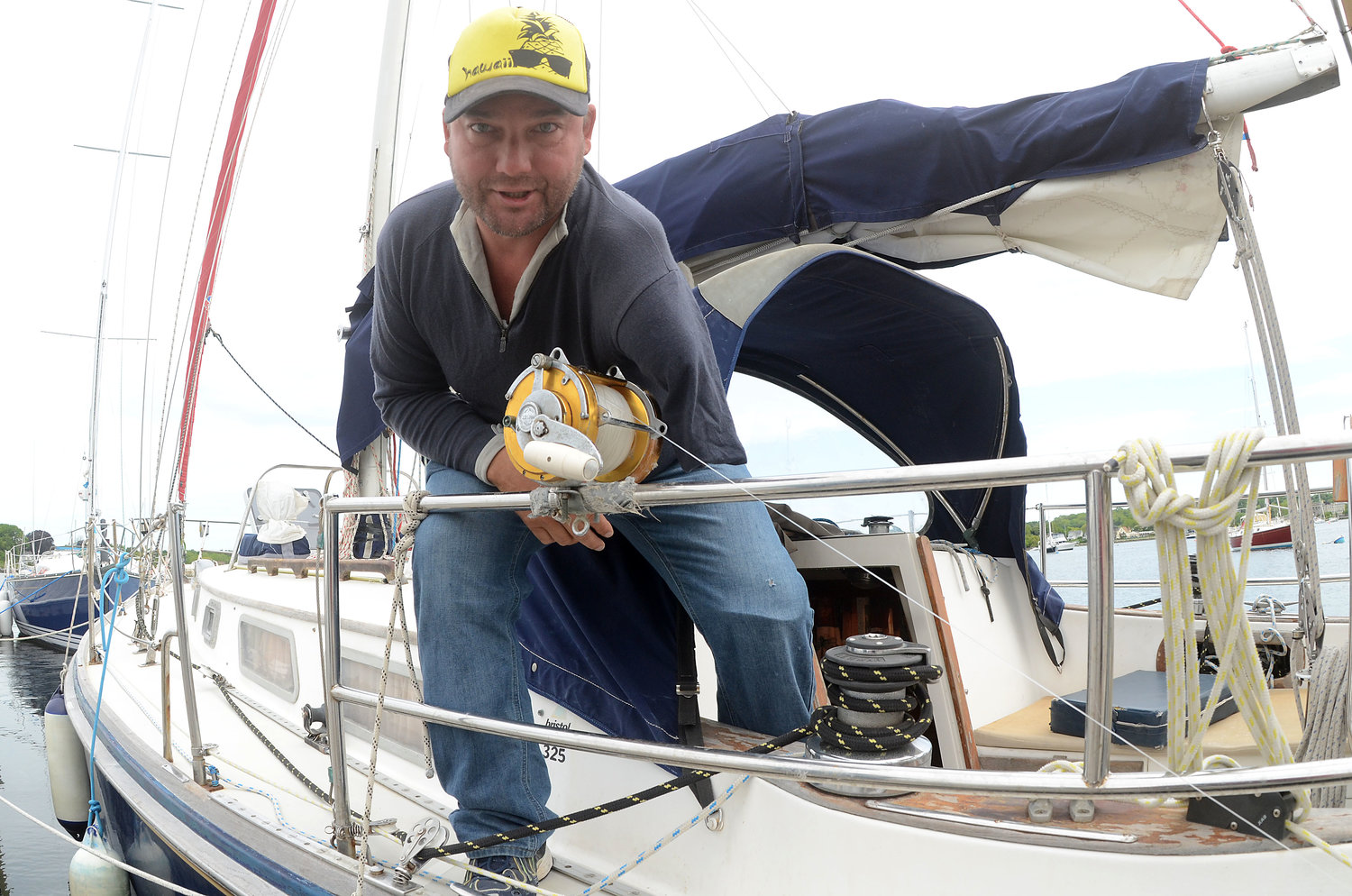 Dustin Reynolds shows how he reels in the big fish with his one arm and a lot of determination.
Richard W. Dionne Jr. 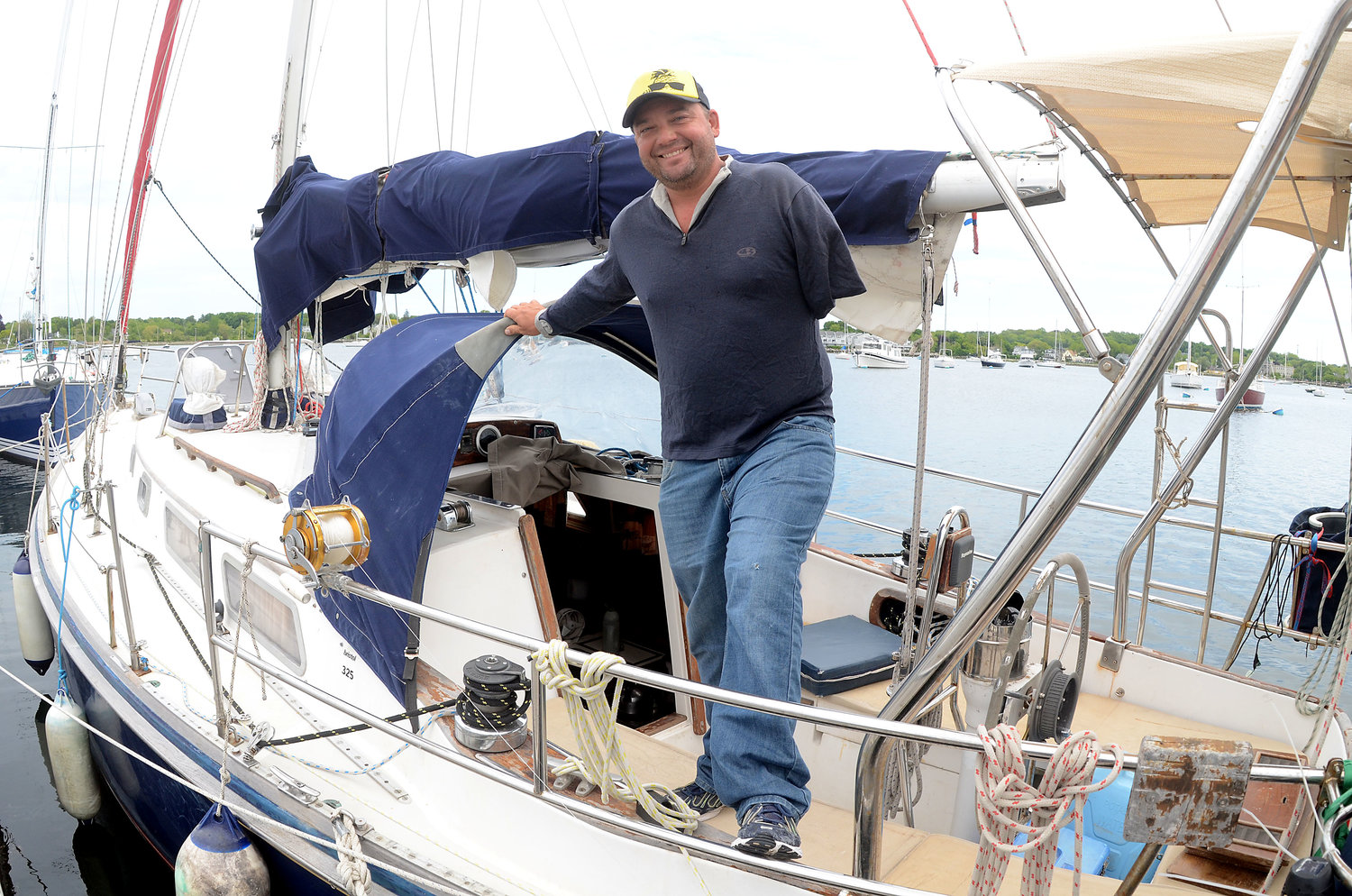 Dustin Reynolds stands aboard Tiama, a Bristol 35 originally launched from Bristol Marine 37 years ago and now docked there for a short time. After losing two limbs when a drunk driver hit him head-on, he decided to sail around the world alone — after he first learned how to sail.
Richard W. Dionne Jr. 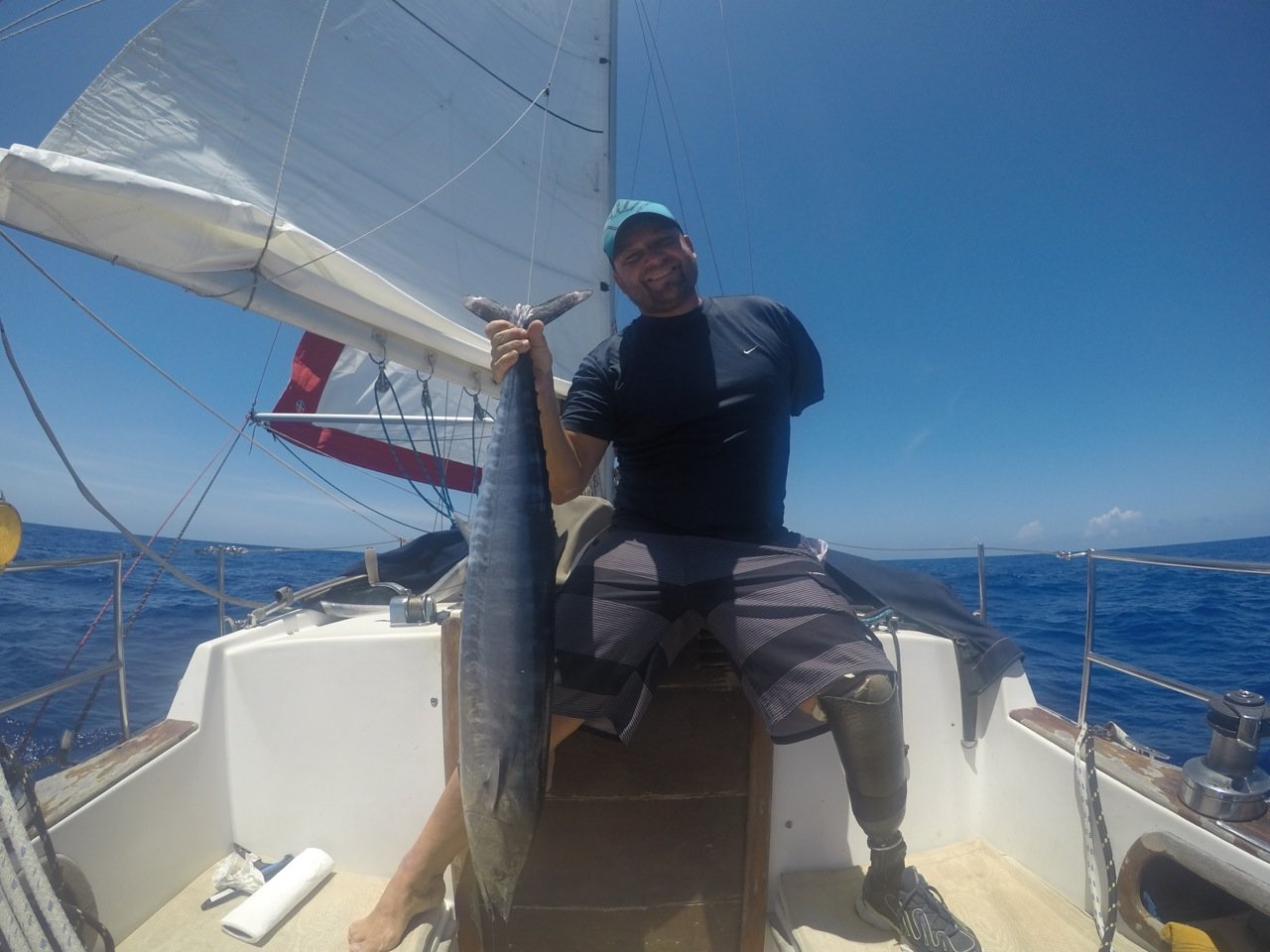 Caught in the Caribbean not long ago, this 25-pound wahoo provided Dustin with a week’s worth of meals. 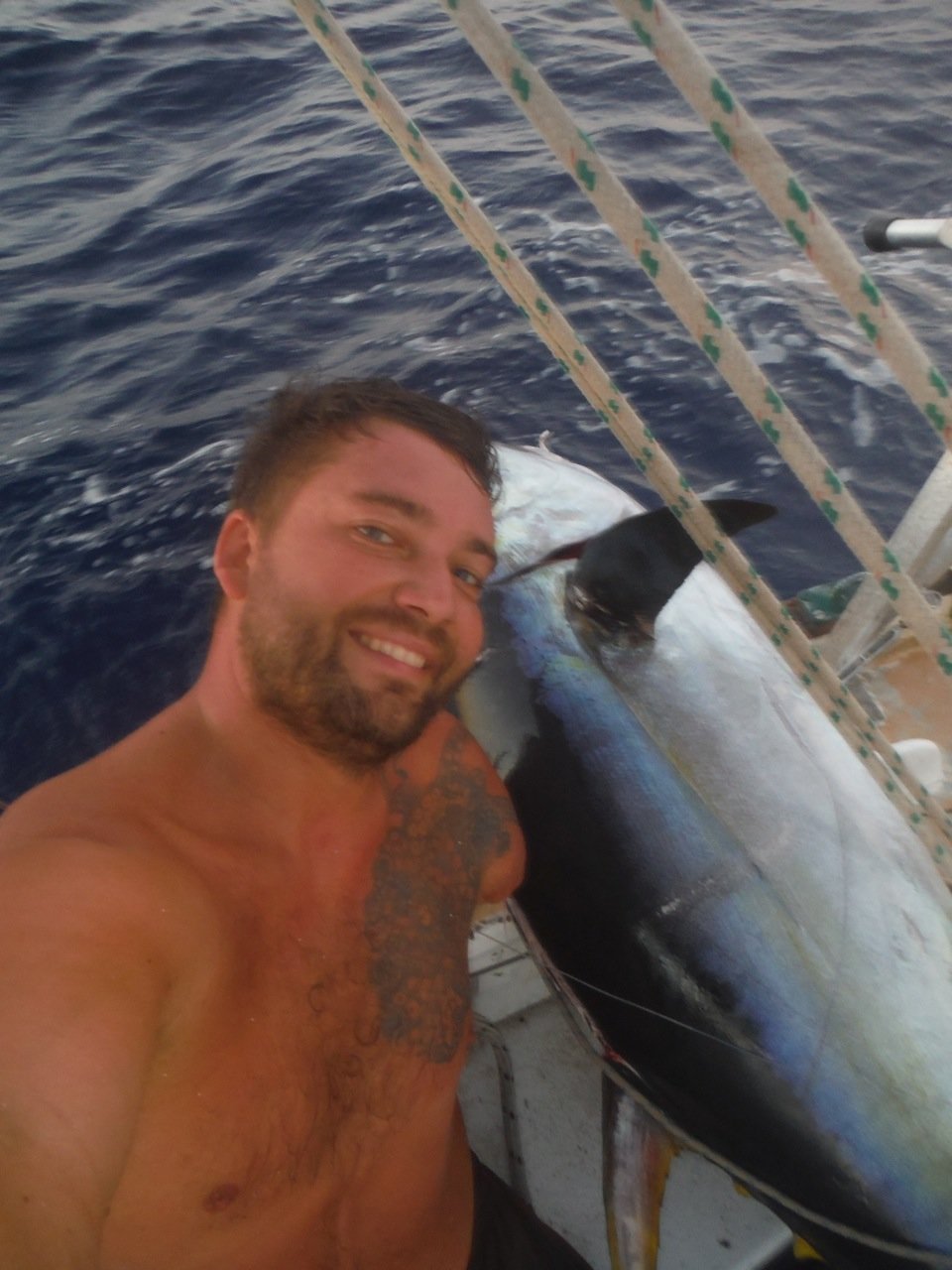 As one of the capitals of the boatbuilding and yachting world, Bristol has produced some legendary sailors, from Nathaniel Herreshoff to Charlie Enright — and hosted many, many more. None has a story quite like tthat of Dustin Reynolds, who arrived at Bristol Marine a couple of days ago, just as the quarantine order for out-of-state visitors lifted.

Dustin is just a few days shy of the sixth anniversary of the day he cast off from Kona, Hawaii, on a bid to sail solo around the world aboard Tiama, his 1983 Bristol 35 which launched from Bristol Marine 37 years ago.

It’s been an epic journey — as any solo circumnavigator will tell you — but Dustin Reynolds is not just any sailor.

An accident changed everything

“I was hit by a drunk driver in Kona. It will be 12 years ago this October,” he said this week from his temporary home on the dock at Bristol Marine.

“I was on a motorcycle, a Honda RC51, and a drunk driver in a Chevy Silverado swerved into my lane on a straightaway and hit me head on. It was almost like he was trying to hit me.”

“My arm flew 45 feet,” he said. His foot was crushed, and doctors said attempting to repair it could take years, whereas amputating and outfitting with a prosthetic could have him walking much sooner.

He spent 10 days in a hospital and seven in an in-patient rehab center.

At the time, Dustin owned two small companies, a carpet cleaning business and a small commercial fishing boat. But the accident sent his finances spiraling down until he was forced to declare personal bankruptcy.

“I was able to exclude the businesses from bankruptcy because they were incorporated, but with no cash or credit to rebuild them, I just sold them, cheap.”

“I needed to figure out what to do next,” he said. “I came across a website about people who sailed solo around the world and set records, and I saw there were no double amputees there, so I said, ‘I guess I’ll just do that’.”

There was just one catch. Growing up in a family of modest means, first in Sacramento, Calif., and later in Portland, Oregon, sailing wasn’t exactly in his blood.

Undeterred, he bought books and looked up YouTube videos on how to sail. Then he went out and bought himself a 1968 Alberg for $12,000.

“I sailed a month around Hawaii with a friend, who also didn’t know how to sail, just to kind of learn. Then the first time I sailed alone it was from Hawaii to Palmyra (a Pacific atoll), which is about a 1,000-mile trip.”

He quickly found that being near shore is a lot more difficult, with shipping traffic and shifting winds.

Being offshore is easier, but his boat was not exactly loaded with the kinds of high-tech equipment most solo long-distance sailors regard as indispensable. For one, he didn’t have any real communication technology, beyond his cell phone — which only works close to shore. (He now has a satellite texting device to use in case of an emergency.)

In deference to his arm, he did add a self-tailing winch on the mast and boom, though those were not added until South Africa, which was about halfway through his journey.

“Before that I used my teeth,” Dustin said. “Luckily I have good teeth. They have been useful.”

His 1968 Alberg carried him as far as Thailand before it became clear he would need an upgrade. “The boat was wrecked,” he said. “I got towed back into Bali three times.”

“I was trying to launch on a 1,000-mile trip to Malaysia and I couldn’t get five miles without having a catastrophic failure. My forestay even came down, in about a 10-knot wind.”

“I hung in Thailand for about a year, and went back to Hawaii for a couple of months to earn some money,” he said. It was about that time when Dustin realized he was committed to going for it. “At first, I didn’t know if it was going to be fun or too difficult,” he said. “So I didn’t tell anyone and I just kind of took off.”

He got rid of his old boat there in Thailand, and picked up Tiama. He was told by the boat’s previous owner that the name means freedom in Polynesian (though he has not been able to verify this.)

Leaving it all on the playing field

Dustin admits the prosthetic foot is a little clumsy on the water. “It doesn’t articulate, so I’m always catching lines,” he said, laughing. “It doesn’t always stay on well.”

In fact, he lost his prosthesis at sea not too long ago, off the coast of Guadeloupe, in the French West Indies.

“I was stepping high over the stern and it fell in the water,” he said. “I dove for it and couldn’t find it.”

He had to return to San Francisco to be fitted for a new leg; the company that made the foot, College Park Industries, spotted him a new foot.

“I posted a message on all the sailing message boards: Lost leg, please send home, but it still hasn’t turned up,” he said. “I still think it’s going to turn up in Panama or something.”

He has a lot of phantom pain, and nerve sensitivity in what remains of his arm, so he has never been comfortable with a prosthetic arm.

“I had one, it attached over my shoulder and when I shrugged, the hook would open and close,” he said.

“It didn’t stow easily. It’s this awkward thing with a hook on the end, and it was always catching wires on the boat.”

One day, on an island off the coast of Sumatra, Dustin saw these two hooks on a bar that made him think of the hooks on his prosthetic.

Dustin’s travels have brought him all over the world, from South Africa to Mozambique and Madagascar, to Antarctica. He’s had scary days on the water with huge swells and currents, including one day in the Southern Ocean when he logged over 265 miles in one day. He traveled through three countries without the backup benefit of a working motor. He’s made friends with lemurs and met up with old friends and family (though any miles logged with others have to be retraced so that he can claim a true solo circumnavigation.)

He was boarded in the Solomon islands by would-be thieves; men whose habit of chewing a certain kind of nut left their teeth blood red. He scared them off by threatening them with a (non-existent) gun — then realized that they would probably just get reinforcements and come back later for the gun. He attempted to leave the area but darkness forced him to retrace his route and return to the same anchorage. Fortunately, the men did not return.

He didn’t get a lot of sleep that night, or any other. Close to shore, he sleeps in 20-minute catnaps, but even further offshore, he doesn’t tend to sleep for longer than about two hours at a time.

“After my accident, the people in Kona were amazing, they really helped,” Dustin said. “Leaving that behind was really scary.”

“I know nothing about the yachting community. I grew up as a poor kid, and I didn’t think yacht clubs were something that would accept me, so I had no intention of interacting with other sailors. But it was quite the opposite. Yacht clubs and other sailors have been fantastic, so welcoming. It’s a very small community, and it is rare that I’ll go somewhere and not know one or two other boats in the anchorage.”

That community, coupled with Dustin’s incredible resilience, has given him some good perspective on that long-ago accident.

“When I was in the hospital, my Dad flew out, and he was very angry,” Dustin said. “I found myself trying to cheer him up, and I remember that I said that I’ll never know if this is going to be a positive or a negative.”

“I love the sailing community. Yeah, it’d be nice to have the arm and leg back for sure, but this has given me a niche; I’m just as happy now as I have ever been.”

Journey to Bristol and beyond

“Andy (Tyska, of Bristol Marine) saw me on YouTube and reached out to me back in December,” Dustin said. He offered to host me up here, and have Bristol Marine help me fix my boat. At the time I said no — not because I wasn’t grateful, but I was smelling the finish line and wanting to get back to Hawaii.

Though Dustin had maintained the safety equipment on the boat, it’s in need of some cosmetics and small repairs — the stuff that falls by the wayside when you are sailing under the power of crowd-funding and not big-name sponsors.

He plans to do a yacht delivery and hang out locally for a bit while those repairs are being done, then he hopes to spend some time cruising the northeast, from Labrador to New York City, perhaps connect with Shake-a-Leg or similar organizations and take some Walter Reed veterans out on the water, before returning to the Caribbean after hurricane season.

From there, it’s through the Panama Canal then on to the Galapagos before completing his journey with a return to Hawaii.

“I want to work on some research projects, a book; work on boats, travel with friends,” he said.

“I don’t have any intention of going back to a normal life.”

For more information about Dustin Reynolds, look for “Singlehanded,” a short film that recently premiered at the Telluride Film Festival, and visit his website at thesinglehandedsailor.com.