The Warren Town Council voted 4-1 last week to approve a revised design for a multi-building recreational facility near the band shell at Burr’s Hill Park. 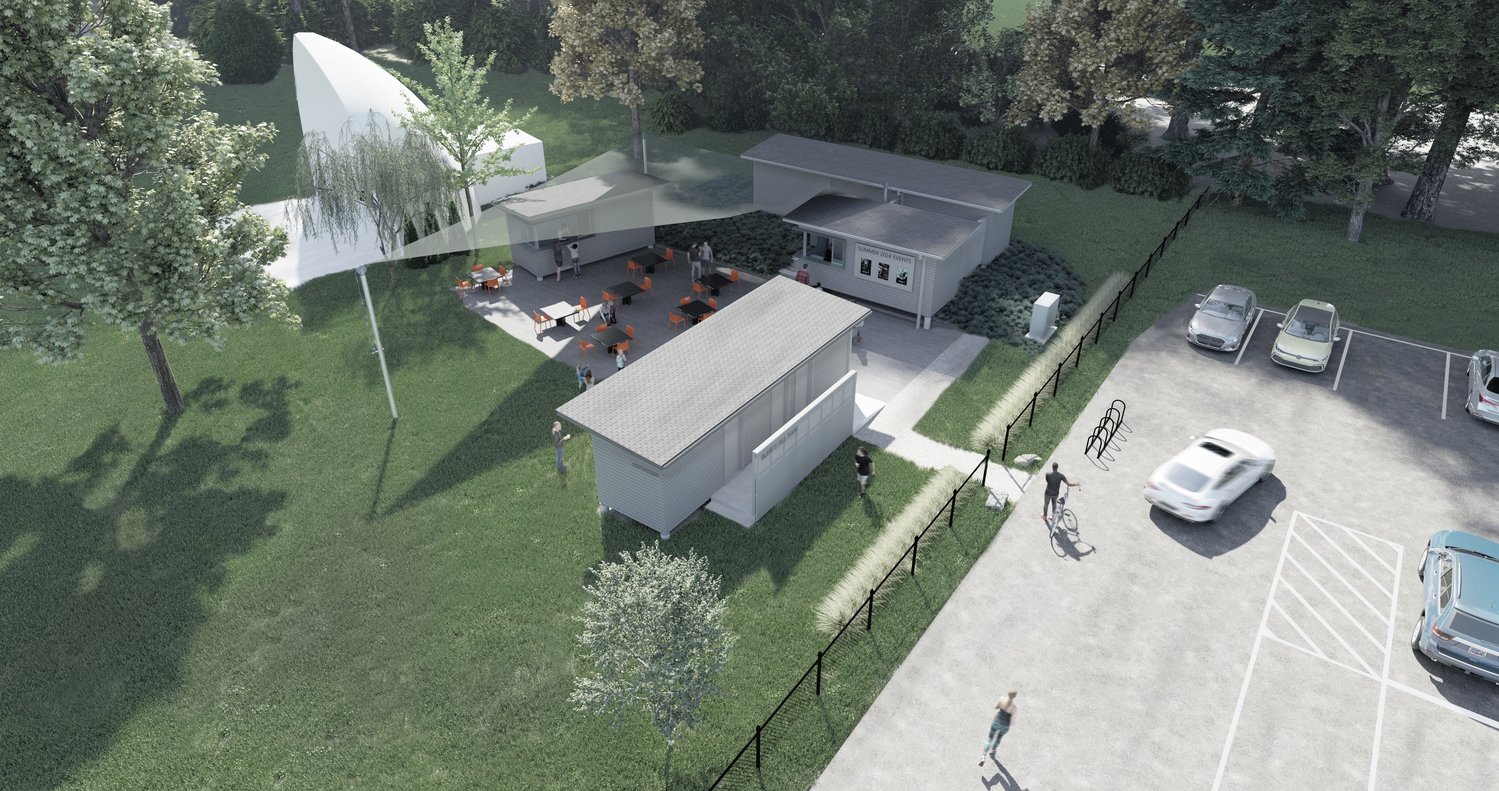 WHAT IT WILL BE: A rendering from Addaspace shows the structures that have been approved (with conditions) to be erected at Burr’s Hill Park, near the band shell. They include a concessions stand (left), a structure with three bathrooms (bottom), and a unit that would be used for office and storage space for the Parks and Recreation Department (top right).

WHAT IT COULD HAVE BEEN: An initial proposal for what the facility could have looked like, first revealed back in March, generated widespread disapproval from members of the public and those on the Town Council. 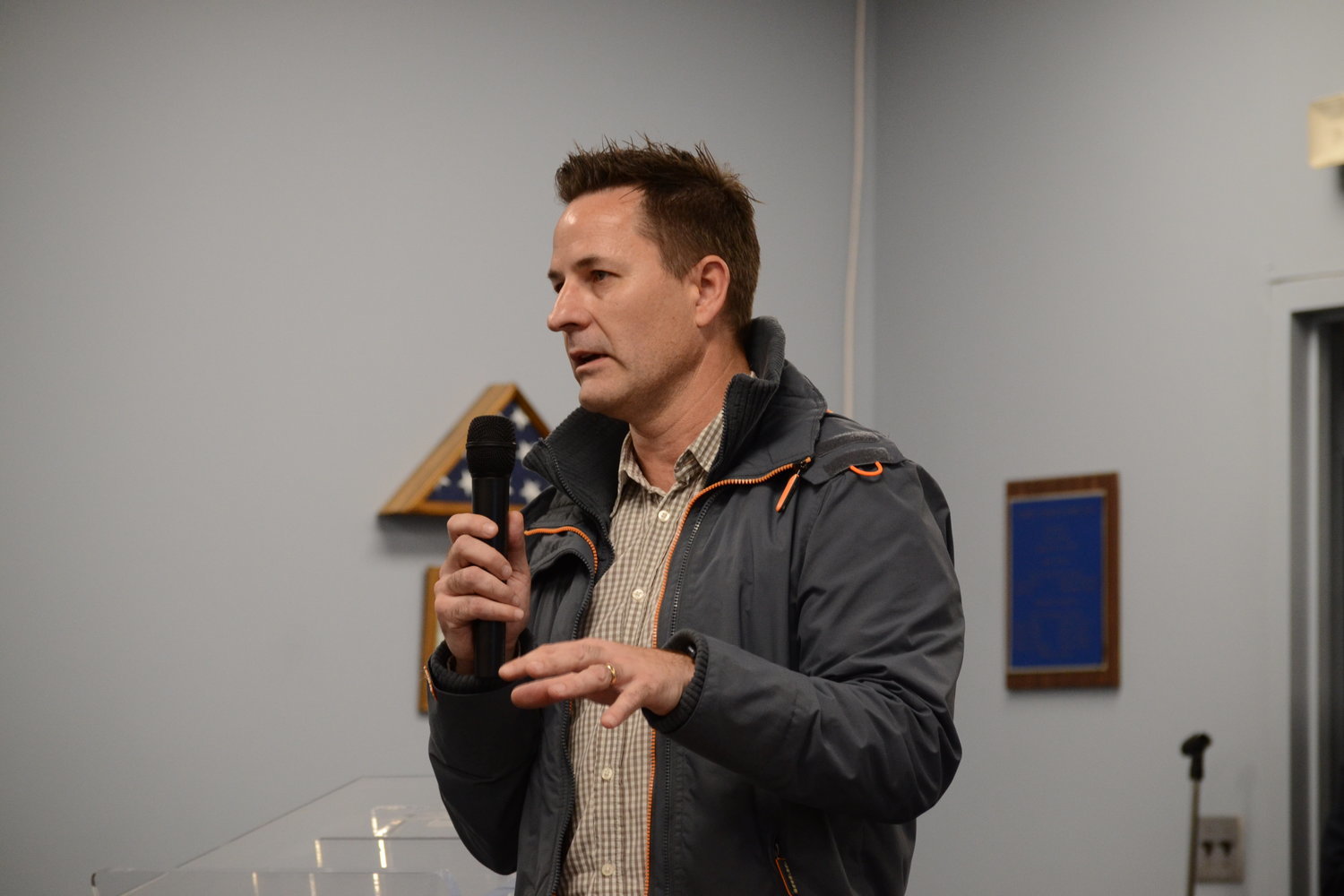 Andrew Naperotic, Principal and co-founder of Addaspace, addresses a full crowd at Warren Town Hall during a public meeting back in March, where dozens of residents spoke out against the initial design concept of the project.
Ethan Hartley
Previous Next
Posted Wednesday, August 17, 2022 9:00 am
By Ethan Hartley

The Warren Town Council voted 4-1 last week to approve a revised design for a multi-building recreational facility near the band shell at Burr’s Hill Park — a process more than five years in the making that will, if things go to plan, be constructed and ready for use by next year’s summer camp season opening.

The project consists of a bathroom structure, a concession stand, and two buildings to be used for office and storage space for the Parks and Recreation Department.

The project has been the subject of extensive public discussion, going back to March when the initial design floated by project designer, Addaspace, generated widespread derision online for the use of shipping containers that many considered to be ugly and not in character with the surrounding area.

That prompted a public meeting packed to capacity with concerned residents, followed by a public charrette in April to go over ideas with community members on how to improve the design — ultimately leading to a site visit in July to unveil the new design plan, which included the buildings being moved to a different area of the park and a design change to include gray cedar cladding to hide the shipping containers’ appearance.

Despite some continued discussion, the Council ultimately decided during their meeting on Aug. 9 that it was time to move forward with the project. The grant the town secured to fund the nearly $500,000 project has a deadline to be used by July 2023, meaning any further changes would jeopardize the ability to get anything done in time.

“I can’t recall ever going to any public or private beach for that matter that doesn’t have some type of concession stand, bathrooms, some type of facilities. This is long overdue, in my opinion. I support this,” said Council Vice President Steve Calenda. “I know folks are not going to be happy because they’d like to see it go in a different direction as far as architectural design or aesthetically pleasing to the eye, but we only have so much money…This is purpose-built for the Town of Warren for what we need to fulfill the requirements of the grant.”

One last plea from a resident
While members of the Council were, for the most part, on the same page about wanting to get the project off the ground and implemented, one abutter presented a detailed testimony on why they still opposed this iteration of the design.

“I am not against building in the park, because there is a need,” began Cory Kallfelz, a Bridge Street resident and registered architect who, along with her husband Douglas, also an architect, had taken issue with the project’s initial design as not fitting with the cultural importance of Burr’s Hill. “From our perspective, the vision of this design doesn’t meet the holistic approach of aesthetics of the surrounding area, an affordable project scope, and the bigger picture of fitting in the park setting.”

Kallfelz expressed disappointment that the flat roofs of the structures did not match surrounding architecture and resembled a “manufactured home park.”

“The architecture or the look of these structures is a modern style and it has no relation to the surrounding gable-end cottages or the existing beach structures,” she said. “Just cladding a structure in wood shingles does not make them appropriate for a location.”

Kallfelz also criticized the cost of the project, laying out the dimensions of each building and assessing that, by her calculations, the whole project amounted to costing roughly $565 per square foot.

“In my experience, $565 a square foot is associated with high-end luxury housing,” she said. “These four structures are pretty minimally fit out, and the storage unit even has unfinished studs on the inside.”

Kallfelz said, for perspective, that she had designed a pool house in Barrington that included indoor plumbing and heating that came out to around $360 per square foot.

Kallfelz recommended looking into a different location in the park for the strictures, so they may be used year-round as a sort of “gateway” to the park that could be utilized to display information about the local Pokanoket heritage and serve as a resource to park visitors.

An administrative hiccup
Councilman Joe DePasquale, the lone ‘nay’ against approving the project, minced no words with his displeasure of the process leading to the new design and the decision he had before him during the meeting.

He got particularly irate after learning the night of the meeting that Addaspace had its business license suspended in February due to not paying a routine fee with the Secretary of State’s office, an apparent oversight that Addaspace co-founder Andrew Naperotic said he had just been made aware of and would be addressing right away.

“I can’t say I feel good about this. The first presentation was horrible. This thing with the Secretary of State’s office put me in a real downward feeling,” DePasquale said. “You’re trying to sell me this and I can’t get over a $150 fee. If you can’t do that, I’ve lost faith. I’ve lost faith. I can’t sugarcoat this. This is like really bugging me. We have 100 neighbors that are going to say ‘Oh you did what you wanted anyway.’ And this isn’t what I want.”

Parks and Recreation Director Tara Thibaudeau tried to address DePasquale’s concerns by refocusing on the main reason the project was put forth in the first place — to give kids attending summer camp a safe place to use the restroom and receive food during programming.

“We did what you guys wanted us to do. We went to the neighbors, we went to the community, we did public outreach, we have stayed within our budget, and we have gone back to the drawing board several times,” she said. “They [Addaspace] have proven that they are capable of providing structures and facilities in the community, as in the Town Wharf, so we know they are good for their word in that respect. So what I am asking is, especially at the current moment in the heat of the summer, I cannot go another summer with the conditions that we have. It is unsafe. It is unhealthy, and this is why we applied for these monies.”

Balancing act
Councilwoman Keri Cronin said that with the amount of public input that has been heard on the project, everyone should recognize that there will be no ‘perfect’ project design to satisfy everyone.

“I think all need to be realistic that whatever decision we make, whatever project we ultimately approve, it is never going to please everybody,” she said. “There will be people in the community who believe we could have done something better or different.”

This sentiment was echoed by Town Manager Kate Michaud.

“[If we added] gabled roofs, yes, that creates a more aesthetically pleasing appearance, but we also had feedback from people who wanted these to be as low as possible,” Michaud said. “So if you make one party happy then you may be making another party unhappy. So it’s been that balancing act that we’ve been trying to work through.”

Councilman Brandt Heckert said that he appreciated feedback from residents like Kallfelz, but at this point in the process they had to move forward with something to be able to meet the timeline of the grant requirements.

“We’re at the eleventh hour here. I wish we had maybe taken into consideration some of those concerns and ideas earlier on in the process. Unfortunately we didn’t,” he said. “We need a facility down there to be improved and if we pull the plug on this…I’m not sure where we’ll be able to go with it. It will be a long, arduous project to try and get back on track if we don’t go with what’s in front of us. That’s my position.”

The council voted to accept the revised design, on the condition that Addaspace addressed their issues with the Secretary of State’s Office and could prove the ability to deliver on the project by next July.