Resident heals and helps others with new memoir

Betsy Brenner’s book details her recovery from an eating disorder

She never planned to write a book. She never thought she would have the time.

But when the pandemic set in, Betsy Brenner found herself with more than enough time to share her story of discovery …

Resident heals and helps others with new memoir

Betsy Brenner’s book details her recovery from an eating disorder 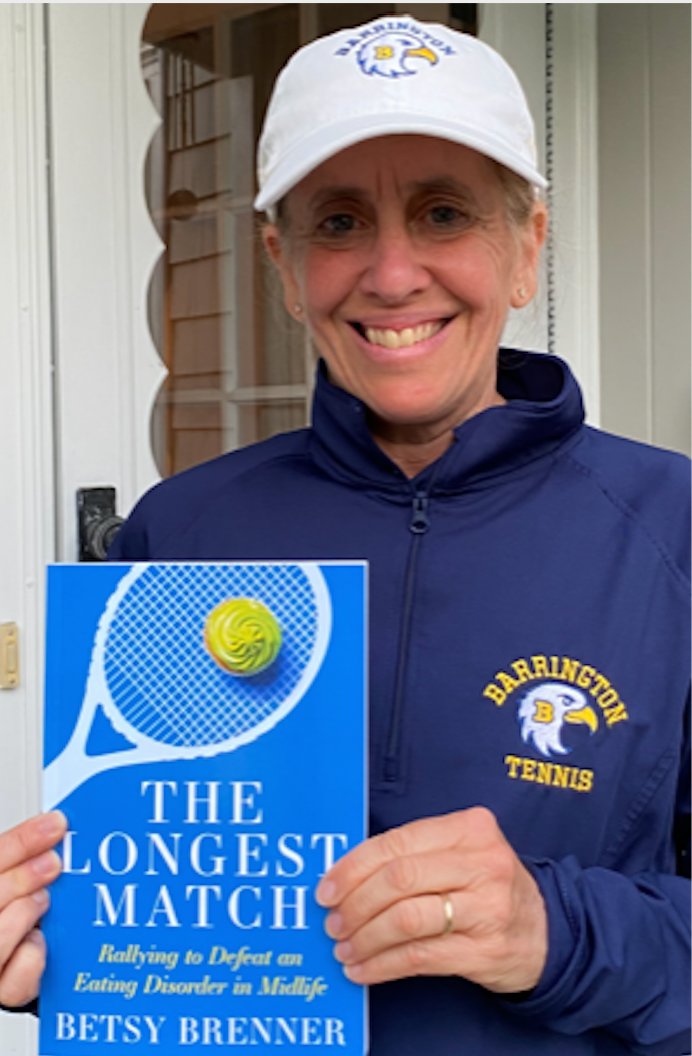 Longtime resident and BHS tennis coach Betsy Brenner displays a copy of her book "The Longest Match." She will read excerpts from the book at a special event at Barrington Books on Saturday.
Posted Friday, June 11, 2021 7:07 am
By Josh Bickford

She never planned to write a book. She never thought she would have the time.

But when the pandemic set in, Betsy Brenner found herself with more than enough time to share her story of discovery and recovery from an eating disorder she developed in her forties.

This weekend, the longtime resident and Barrington High School tennis coach will read from her book during a special event at Barrington Books. The book signing and launch will be held Saturday, June 12 from 11 a.m. to 1 p.m.

“It was truly a pandemic project,” Ms. Brenner said. “As I was preparing to write the first chapter, the pandemic hit. I started writing this in March (2020) and finished in January.”

Ms. Brenner said her decision to write the book served two purposes: The first was to help her recover from an eating disorder; the second was to help other people heal.

“My message now is that it’s never too late to be a work in progress. That’s the last sentence of my book,” she said.

Through her book and previous speaking events, Ms. Brenner offers an honest, detailed look at her life. She grew up playing competitive tennis and continued in college, playing Division I tennis at Brown University. Tennis remained an important part of her life, but in her 40s Ms. Brenner developed severe asthma. That forced to take a break from tennis, and it also served to expose her eating disorder.

“When I couldn’t play tennis, I started restricting my food,” she said.

The eating disorder had been part of her life for a long time, Ms. Brenner said, adding that the asthma and lack of tennis pushed it from a slow simmer into a rapid boil.

During a regular medical visit, Ms. Brenner’s doctor said he was concerned — he said it looked like she had lost a lot of weight.

That moment back in 2010 turned into a lengthy journey to recovery. She worked with a team and discovered that much of her disorder was tied to other parts of her life — anxiety about her parents’ divorce when she was a child, never grieving after her parents passed away, always being the caregiver but never pausing to make sure she was taking care of herself.

Ms. Brenner said her eating disorder and eventual recovery led her to better understand her own life, and she has been happy to share the tale with others.

“I literally become an open book,” Ms. Brenner said. “But I really feel I can help people… I feel like it’s really helped me heal. … it’s such a relief to have this out there.

“There’s so much shame and secrecy. I always kept it a secret.”

Ms. Brenner said she had never really planned to write a book… she never thought she would have the time to do so. But she was eventually connected with a professional editor who lives in Australia — “I found out about her through the eating disorder world… she uses writing to help people heal.”

Ms. Brenner pulled together all of her diaries and journals she had kept from throughout her life.

“It was like putting together a jigsaw puzzle of my own life,” she said.

Ms. Brenner assumed it would take years to compile her story. She began preparing to write the first chapter when everything changed — the government ordered lockdowns and the pandemic set in. That was in March 2020. She finished her book in Jan. 2021.

“It was an incredible experience,” Ms. Brenner said, of writing her book.

She said she has been overwhelmed by the kind and positive responses.

Longtime resident and Barrington High School tennis coach Betsy Brenner will read from her book during a special event at Barrington Books: