It was tedious. It was frustrating. And it was time-consuming.

But in the end, the research work completed by three college students helped uncover some valuable information about … 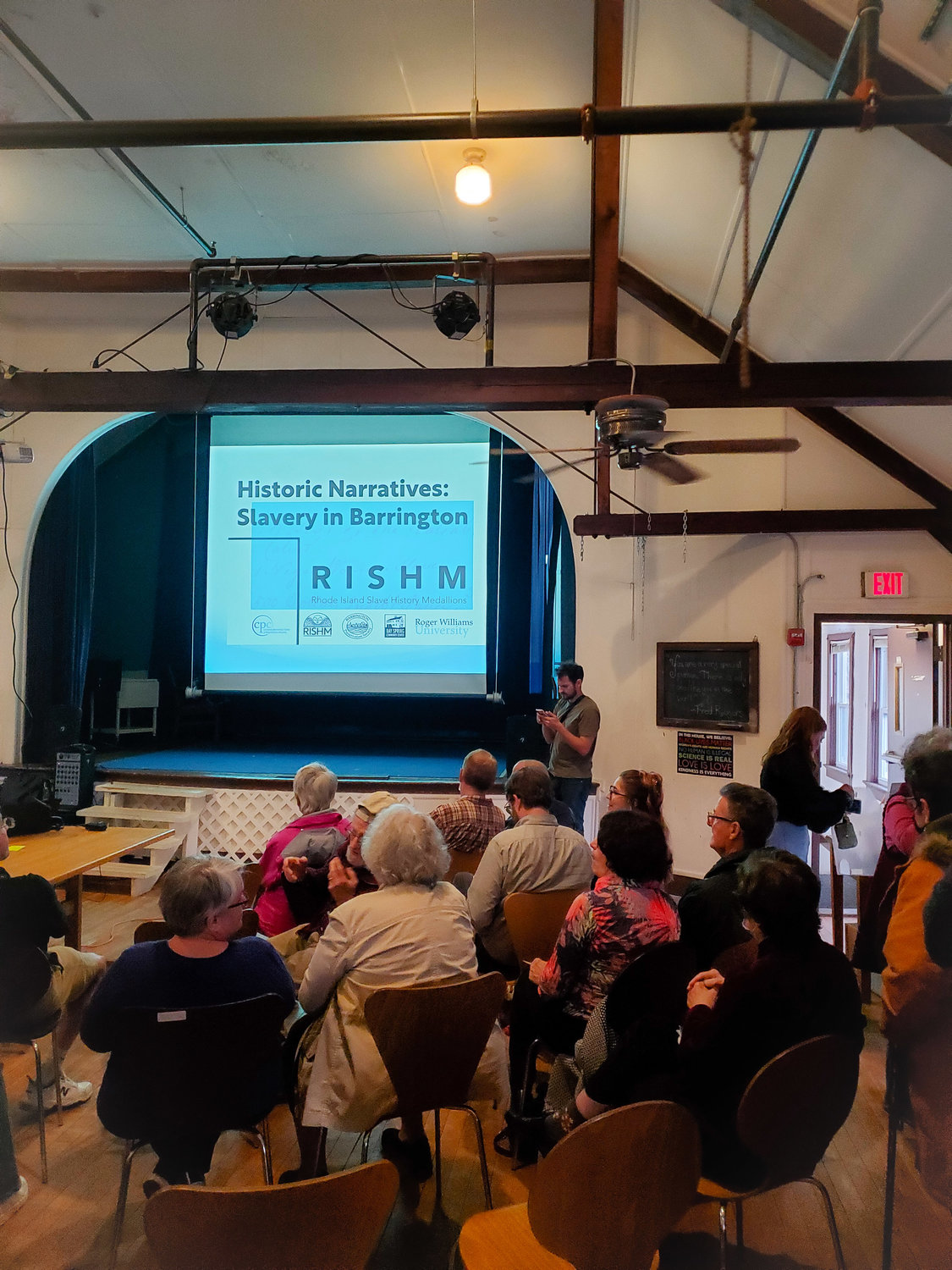 Students shared their discoveries about Barrington’s slave history during a recent presentation at the Bay Spring Community Center. 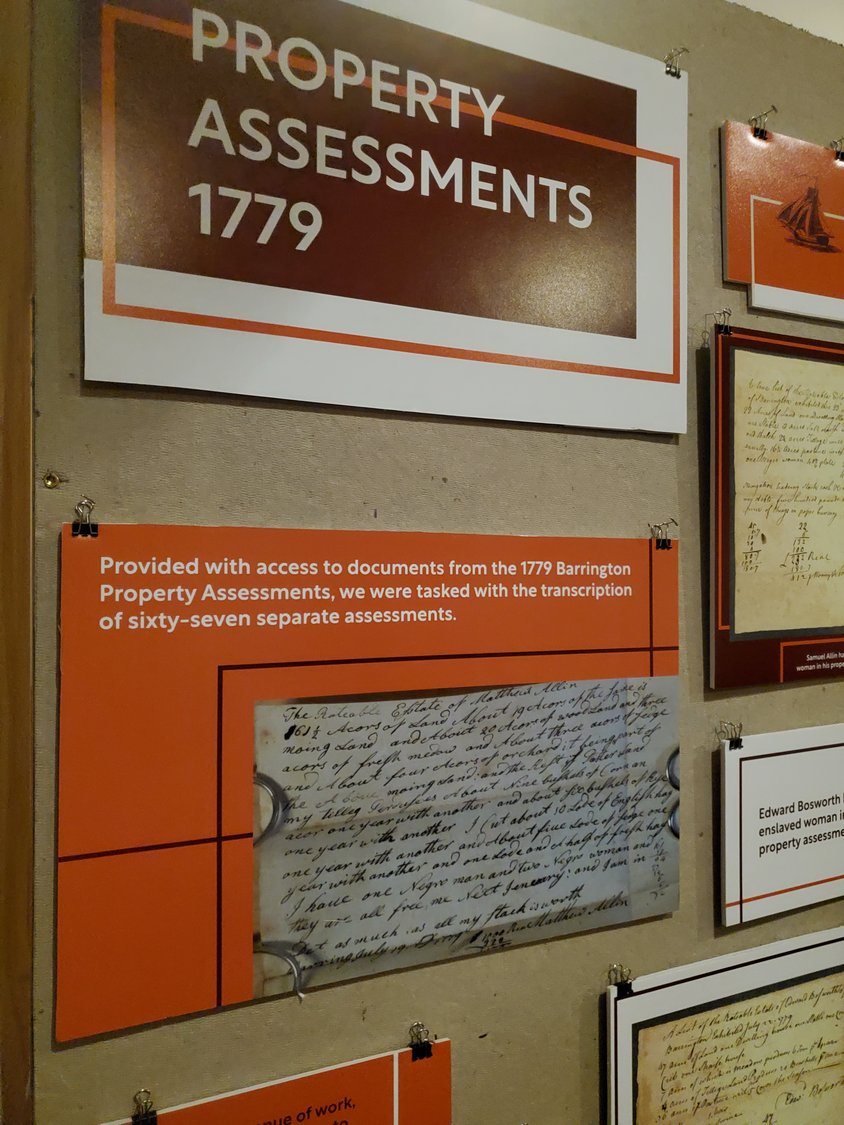 A display sharing information about research into Barrington’s slave history. 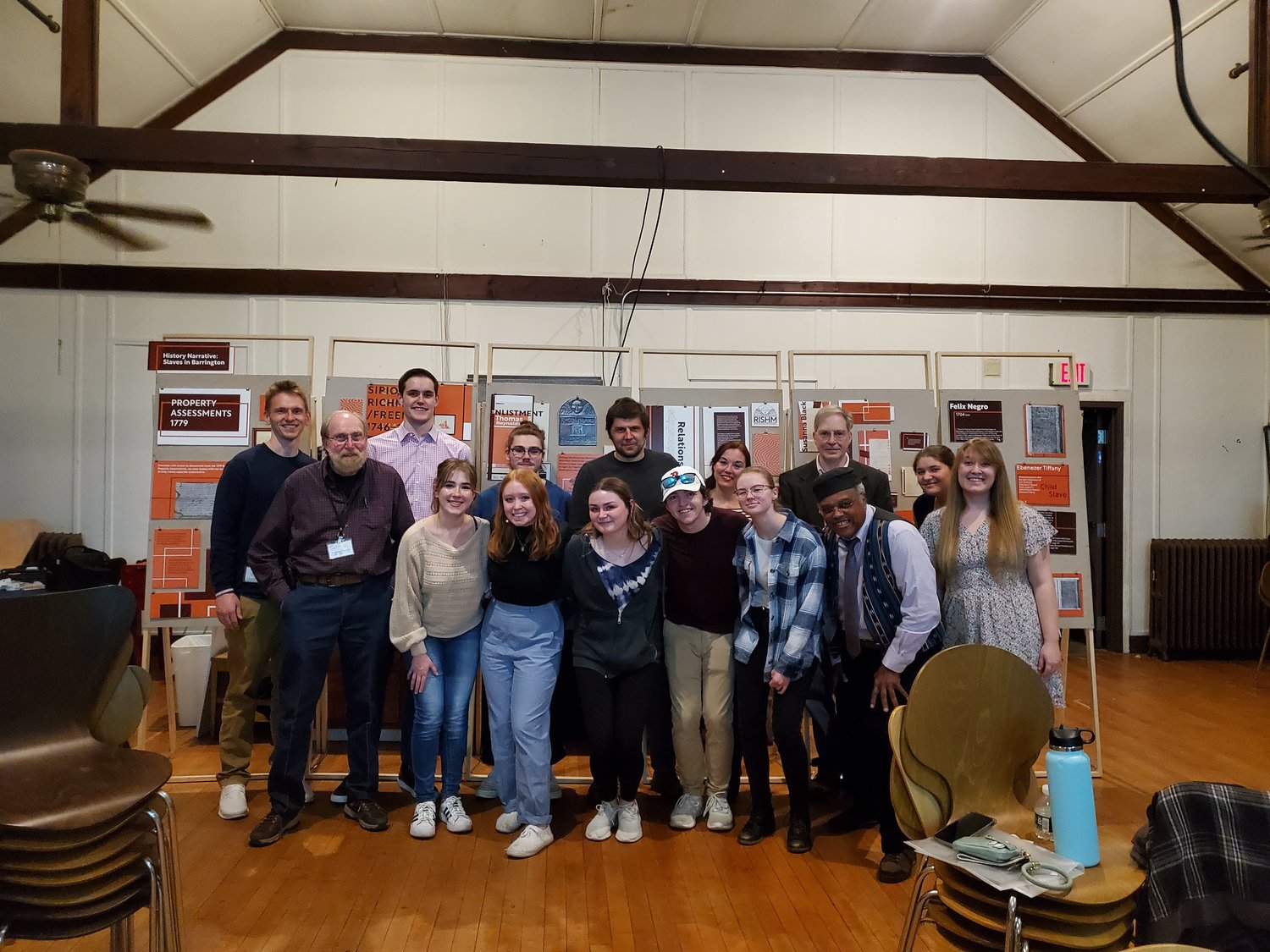 Students shared their discoveries about Barrington’s slave history during a recent presentation at the Bay Spring Community Center. The research will also be used for a RI Slave History Medallion installation in Barrington.
Previous Next
Posted Friday, May 13, 2022 12:10 pm
By Josh Bickford

It was tedious. It was frustrating. And it was time-consuming.

But in the end, the research work completed by three college students helped uncover some valuable information about Barrington’s slave history. As part of the Rhode Island Slave History Medallions project, Roger Williams University students Courtney Garrity, Kristen Black, and Lucas Laager discovered interesting historical documents, including a land deed from 1719 that is one of the earliest references to a person of color owning property in Barrington.

Garrity said the land deed of “Felix” posed one of the toughest challenges she has ever experienced while working in an archival setting.

“The scan itself was in rough shape with bleed-through from the text on the back, portions crossed out, sentences written in between, and overall fading,” Garrity wrote in an email to the Times. “It took several hours to transcribe only a small portion and all three of us worked on it together to try and transcribe as much of it as we could. Despite the frustration, this document was a unique and rewarding experience as it was (one of) the first references and earliest references found to date of a person of color owning property in Barrington, dating back to 1719/20.”

The roots of the Barrington research work can be traced back to a community-engagement project conducted through the Roger Williams University Community Partnership Center.

RWU Associate Professor of History Charlotte Carrington-Farmer had students in her History 399 class complete a project researching enslaved people connected to Bristol’s Linden Place and the town of Bristol in general. Carrington-Farmer said the research was used as the basis for the slave medallions installation on Juneteenth 2021.

Stephen Venuti, the president of the Barrington Preservation Society, had been attending that event. Following the presentation, Venuti approached Carrington-Farmer and asked if she and her students would partner with Barrington on a similar project. They were happy to do so.

The students shared their discoveries during a recent presentation at the Bay Spring Community Center. It will also be used in the future for a RI Slave History Medallion installation in Barrington.

“Working to uncover the history of enslaved individuals can be incredibly challenging as records were few and far between,” wrote Garrity, a senior at RWU. “In many instances, if there are records they were often written by the white enslavers and white community. In a way, I believe that very fact is a driving force behind the research — by uncovering references to enslaved and freed people of color we work on bringing them back to life and back into the greater narrative.”

“Through these records we were able to identify both African and Indigenous enslaved and free residents of the Town of Barrington,” Garrity wrote. “There were many, many hours of searching to find a single piece of information, as seems to be the process, and that is what made the process so rewarding when we did find something.”

Garrity wrote that picking through the documents, page by page, provided a valuable learning experience, “…whether we found something relevant to our avenues of research or not, and it really became an exercise in patience and deeper level analysis. It was also an exercise in paleography, the lack of standard spelling, flourishing scripts, fading inks, and worn parchment making each document a unique experience.”

Kristen Black, a junior at RWU, was particularly proud that she and Garrity were able to find the land deed for Scipio Richmond.

“This deed was signed June 6th, 1772. The deed was for an acre of property in Barrington … This was sold to Sipio for twenty-one dollars by Joshua Bicknell and Matthew Allin,” Black wrote. “We found this document tucked within the Peck Collection and it had been missed in the initial creation of the finding aid and we had nearly missed this in our pass through the records.

The students also found a land deed for “Felix.” It was dated 1719 and is one of the earliest references to a person of color owning property in Barrington. According to the students’ research, Felix sold the property to Ebenezer Tiffany for 51 British pounds. The nine acres were part of the original Sowams land division of 1684.