Knights claim first ever RIIL title in the sport

PROVIDENCE — It was the perfect ending to a near perfect season.

Knights claim first ever RIIL title in the sport 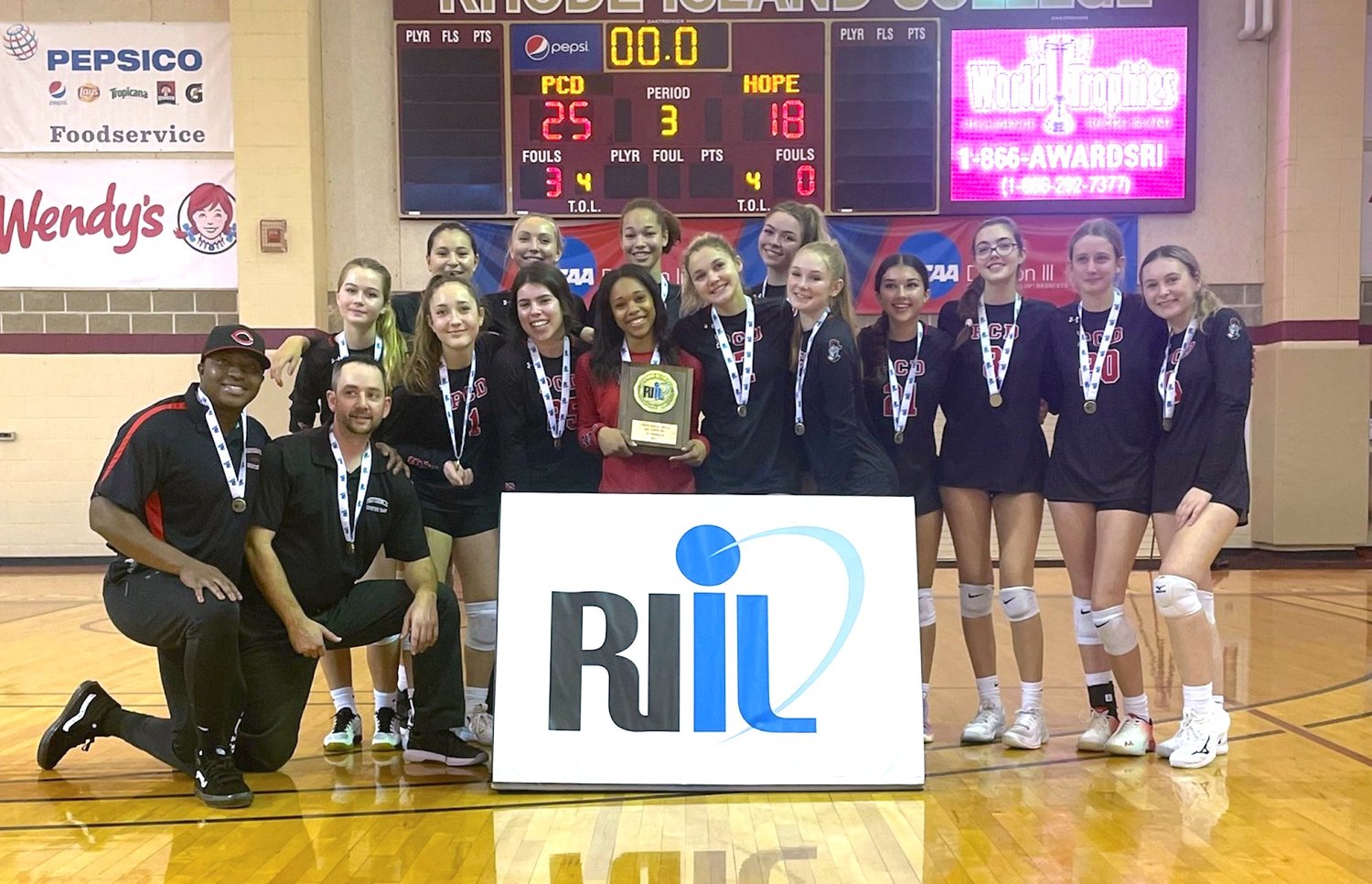 PROVIDENCE — It was the perfect ending to a near perfect season.

The Providence Country Day girls’ volleyball team fulfilled its ultimate goal of winning the Division IV state championship on Saturday, Nov. 12, with a sweep of the Hope High School Blue Wave by the scores of 25-15. 25-20, 25-18.

The Knights capped off their fall with 19-1 overall record and 15-1 in the league, including the championship match victory and a similar 3-0 win over Davies Tech in the semifinals.

The title was the first championship in the sport for PCD since the program moved to the Rhode Interscholastic League in time for the 2016 season.

“This was a year like none other. I knew we had a shot at winning a lot of games and being very successful from the start. The challenge was to keep the girls in the right mindset and improving throughout the season,” said PCD head coach Brad Clarkson.

He continued, “I’m so proud of our four senior captains Ama Koran, Ella LaFrenier, Serenna Sousa, and Katrina Zysk and how much time and effort they’ve put not only this year, but over the past four years. As special as this is for me, these girls really deserve to enjoy the moment.”

Koran, a middle hitter, led the Knights with 217 total kills on the season. Outside hitter LaFrenier brought leadership, consistency, and maturity on and off the court.

“Ella was our go to first server every game, and it always seemed to come down to her when it mattered most. I can always count on her,” Clarkson said. “Serenna, our libero, probably gets 90 percent of all first touches that make it past our strong defensive front. Her athleticism and ability to read the hitters makes her a very special defensive player.”

Of Zysk, who was suffered a thumb injury during warm-up for the title match, Clarkson said she “showed heart and determination fighting through injury… I’m so thankful our trainer was there and taped her up quickly. If she couldn’t play, things might have gone very differently.”

The seniors previously tasted much disappointment in the postseason, losing in the semifinals last fall to Tiverton, 3-2, and in the one-off COVID-19 spring season earlier in 2021 when the then-also unbeaten Knights fell to second-seeded Woonsocket by the same 3-2 score in the championship contest.

“We’ve made it here before and we lost last time - it was heartbreaking. We know how they’re feeling right now and we just wanted to change the narrative and be on the winning side this time,” said Koran.

After securing the first place finish and a bye in the 2022 playoffs, PCD had almost two weeks off until its semifinal match. With all of that down time the Knights had balance resting up with staying sharp.

“I can’t thank coaches Alex Butler (East Providence) and Rich Sousa (Central Falls) enough for scrimmaging us during that long time off,” Clarkson. “We were all in the same boat with a lot of time off and needed to get work in. Both of those programs are very good and it gave us an opportunity to go up against two of the top teams in Divisions II and III while preparing us for our own championship run. It was so fulfilling to come all this way having high expectations and ultimately meet those expectations. I’m so proud of the girls on this team.”

To make things even more special, after the PCD volleyball team won its title in the morning, many of the players went to support the girls’ soccer team, which won its Division IV title with a 2-0 win over Rogers that same night in Cranston.

“It was truly a special day to be a Knight, and incredible when you think about how small our school is to have two girls programs in the same season and on the same day win their respective state titles,” Clarkson added. “We certainly ask a lot out of our student athletes because we know that they can handle it. This year, they really went above and beyond and I am proud to be a teacher and coach here at PCD.”

— Cordischi, a junior at PCD, reported this story with edits made by The Post staff.