By the spring of 2023, portions of the Kickemuit Reservoir’s upper and lower dams will be removed... 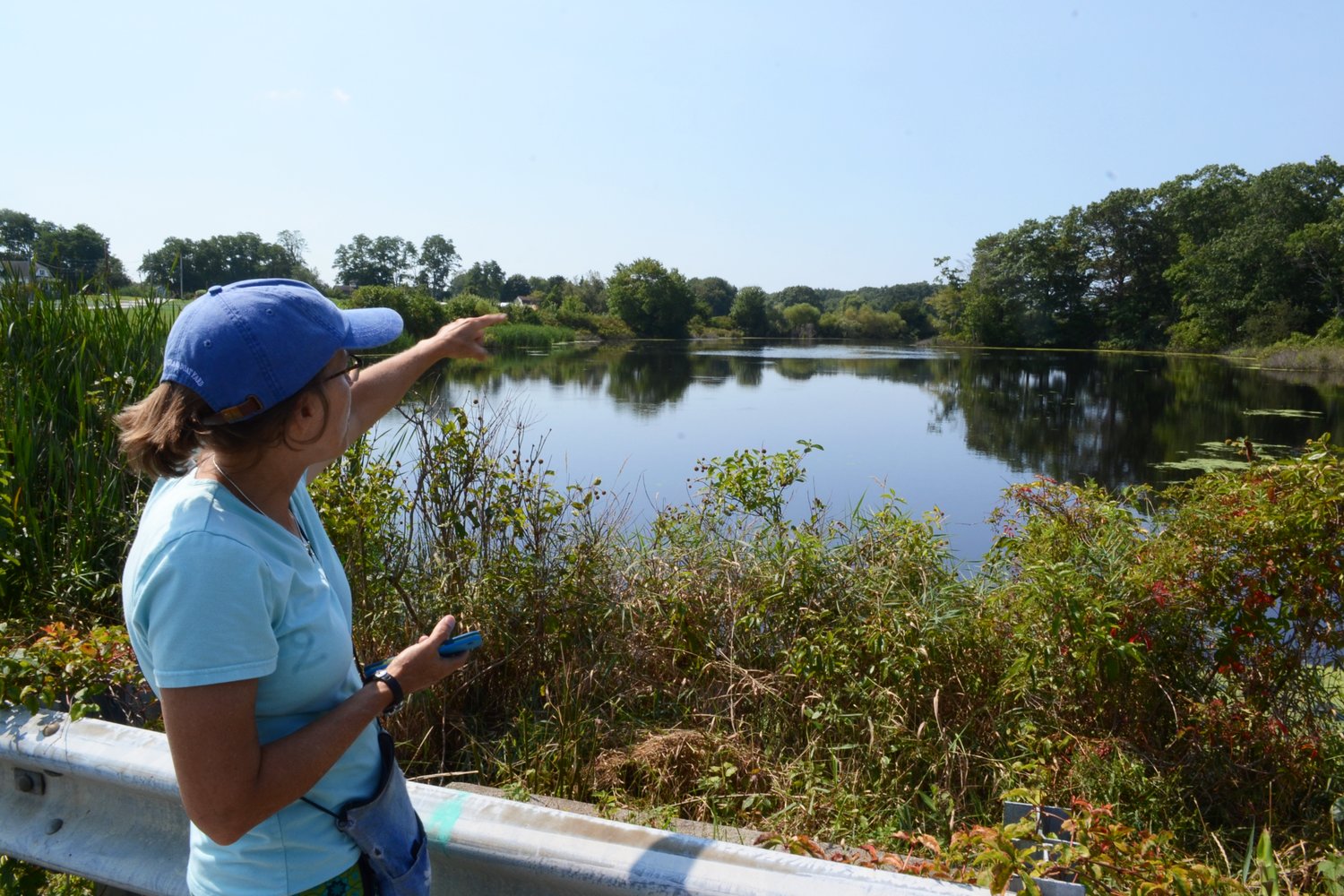 Wenley Ferguson, Director of Habitat Restoration for Save the Bay, looks out on the portion of the Kickemuit Reservoir just south of Schoolhouse Road. This scene will look much different once the two dams blockading the reservoir are demolished in the coming years.
Photo by Ethan Hartley 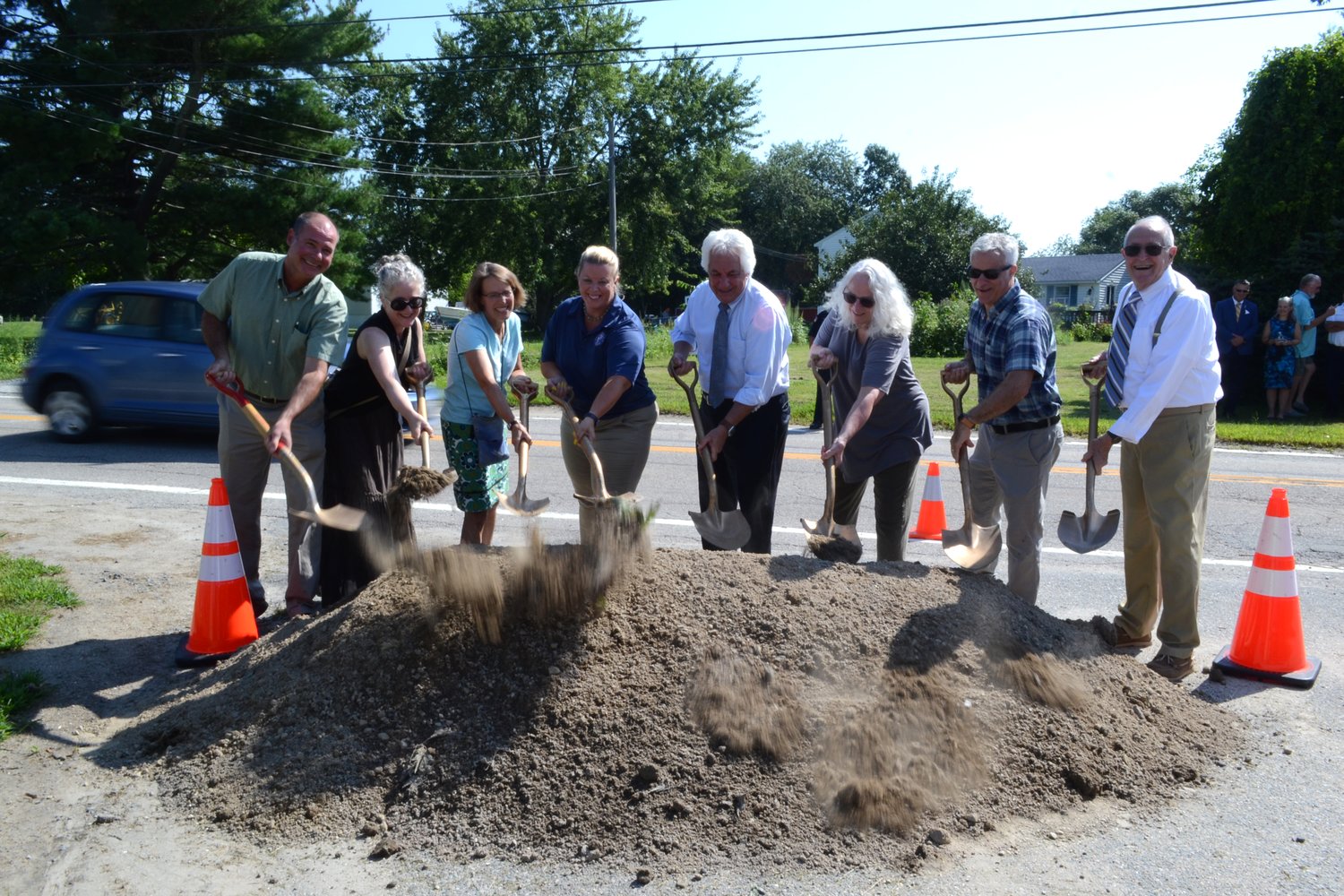 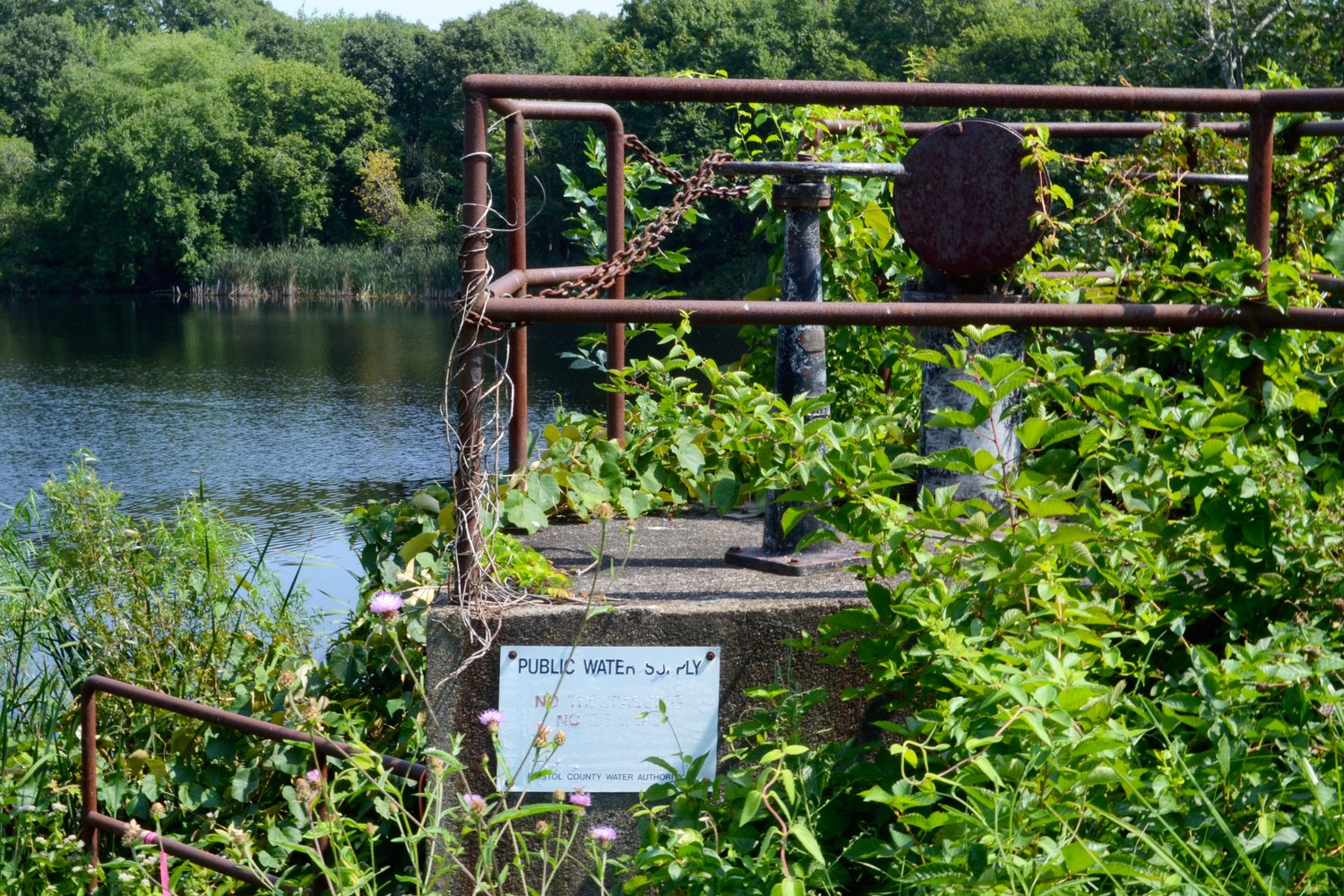 A relic of the past, this pump station apparatus has long since stopped functioning at the Upper Kickemuit Reservoir.
Photo by Ethan Hartley
Previous Next
Posted Wednesday, September 1, 2021 3:31 pm
By Ethan Hartley

The beginning of the end of the Kickemuit Reservoir — also known as the Warren Reservoir — kicked off last Wednesday morning with a ceremonial groundbreaking attended by representatives from the Town of Warren, the Bristol County Water Authority (BCWA), Save the Bay, and the Rhode Island Department of Transportation (RIDOT).

By the spring of 2023, portions of the Kickemuit Reservoir’s upper and lower dams will be removed, allowing the tidal waters of the Kickemuit River to flow unimpeded and restore the area into a tidal wetland — which advocates say will result in a much healthier ecological system and open up the area to increased public use.

Additionally, the first phase of the project consists of a $6 million road rehabilitation effort by RIDOT that will reconstruct 2.6 total miles of road on Birch Swamp Road and Schoolhouse Road, to be completed by December 2022. This includes a stretch of Schoolhouse Road that currently bisects the Warren Reservoir and has been prone to flooding. RIDOT will raise the elevation of this portion and replace the three culverts beneath the road to allow for better flow of the river once the dams are removed.

“It’s an ecological win in addition to being an engineering and road construction project,” said Peter Alviti, Director of RIDOT, at the groundbreaking ceremony. “It’s a win-win for the environment and for travelers in this area.”

RIDOT had originally intended to re-pave Schoolhouse and Birch Swamp Roads as part of their RhodeWorks program, with a construction start date to be determined in 2025. However, once they learned that flooding issues on Schoolhouse Road would persist without the removal of the Kickemuit Reservoir dams, they gave the BCWA a proposal — find the money to remove the dams, and they would raise the road and replace the culverts in addition to doing a full-scale road reconstruction.

“The Water Authority put their shoulder in and the money up to take out the dam, so we’re going to move forward with this,” Mr. Alviti said. “We’ll make make Schoolhouse Road a resilient, reliable emergency evacuation route.”

According to BCWA Director Stephen Coutu, the cost of removing the lower dam — which will come first as the lower dam regulates the tidal flow between the reservoir and the Kickemuit River — is estimated to cost around $1.5 million. The upper dam removal is estimated to cost about $1 million. He said that the water authority has secured funding for about half that amount, including various grants and $1.2 million from the state’s Climate Resilience Fund in 2020. Mr. Coutu stated that no additional rate increases will be necessary to pay for the remainder.

The dam removal is being undertaken by the Pare Corporation, which is currently securing permits from the Rhode Island Department of Environmental Management, the Coastal Resources Management Council and the Army Corps of Engineers. The process will occur in multiple steps to allow for the purposeful removal of sediment, including sediment contaminated by copper — a remnant from when the reservoir was treated as a potable source of drinking water for Bristol County.

With the dams removed and the road raised, advocates say that the flooding issues on Schoolhouse Road should be solved not only under current weather and tidal conditions, but future conditions caused by rising sea levels as well.

After the groundbreaking ceremony Wenley Ferguson, Director of Habitat Restoration for Save the Bay, pointed out at a section of vegetation in the Kickemuit Reservoir just south of Schoolhouse Road, which is colloquially known as buttonbush.

Observation of the plant throughout the past few years within multiple portions of the reservoir, along with scientific data collected in recent years, had demonstrated to Ms. Ferguson something important — the plant, which thrives in freshwater, was dying, an indicator that the previously fresh water of the reservoir was turning salty.

“It’s interesting to see how salty that lower impoundment is,” she said. “It’s already converting into a brackish system even without us removing the dam.”
According to research from the BCWA and Save the Bay, the tidal flow of the Kickemuit River, which begins south of the lower dam near Child Street, has been intruding into the reservoir for many years during high tide events. Because of the reservoir’s flat topography, this intrusion of salty water actually flows all the way north and has even been observed flowing into the upper reservoir area during particularly high tides, according to Ms. Ferguson.

The increased salinity, combined with the water’s shallow depth and low oxygen levels caused by regular algae blooms in the summer and early autumn seasons, has contributed to a certain amount of stagnation of plant and marine life in the reservoir. A herring ladder installed in 2007 near the lower dam did not succeed in bringing fish back to the reservoir in subsequent spawning seasons. All of these factors have indicated one thing to Ms. Ferguson.

“These are not healthy systems today,” she said.

By removing the dams and restoring a natural tidal flow system, advocates for the project contend the waters will become healthier and allow for the reintroduction of estuarial plant life and encourage the growth of a wide variety of wildlife, including river herring, striped bass, bluefish, and the endangered diamond-back terrapin. Additionally, it will create increased flood storage capacity during bouts of prolonged precipitation.

The end of an era

Originally created via the construction of the lower dam in 1883 to establish a dedicated public freshwater supply, the Kickemuit Reservoir has a storied past in Bristol County. The removal of its dams will officially spell the final chapter of that history, and return the waterway into its natural state as a tidal estuary.

Outside the parameters of the project at hand, what exactly the future holds for the reservoir area is still to be determined. Both Ms. Ferguson and Mr. Coutu said that there are active conversations occurring regarding opening up the area to more public use that is currently not allowable due to its classification as a public drinking water source — despite the fact that it hasn’t been used for for drinking water since 1998 (and even then only as a backup source). Mr. Coutu said he was unaware of any plans to sell any of the land off to private developers.

The inception of this project also underlines the writing on the wall for the Bristol County Water Authority’s water treatment plant located on Child Street, which was last utilized regularly in 2011 and completely ceased operations in 2019. There is no current plan regarding what will be done with the building.

Although advocates for this project point out that the reservoir hasn’t been a viable source of drinking water for decades, the destruction of the reservoir’s dams will officially end the possibility of Bristol County having access to its own supply of freshwater. The issue resulted in much debate back in 2011, when the BCWA insisted that the cost to upgrade its water treatment facility to continue processing the reservoir’s water was unfeasible.

The approximately 50,000 people in Warren, Barrington and Bristol who get water from their municipalities will continue to depend on getting it from the Scituate Reservoir via Providence Water. The Bristol County Water Authority is currently in the midst of securing a backup link via the East Providence line, which is nearing completion, and an additional backup line is in the planning phase that will link through Pawtucket and their reservoirs in northern Rhode Island.