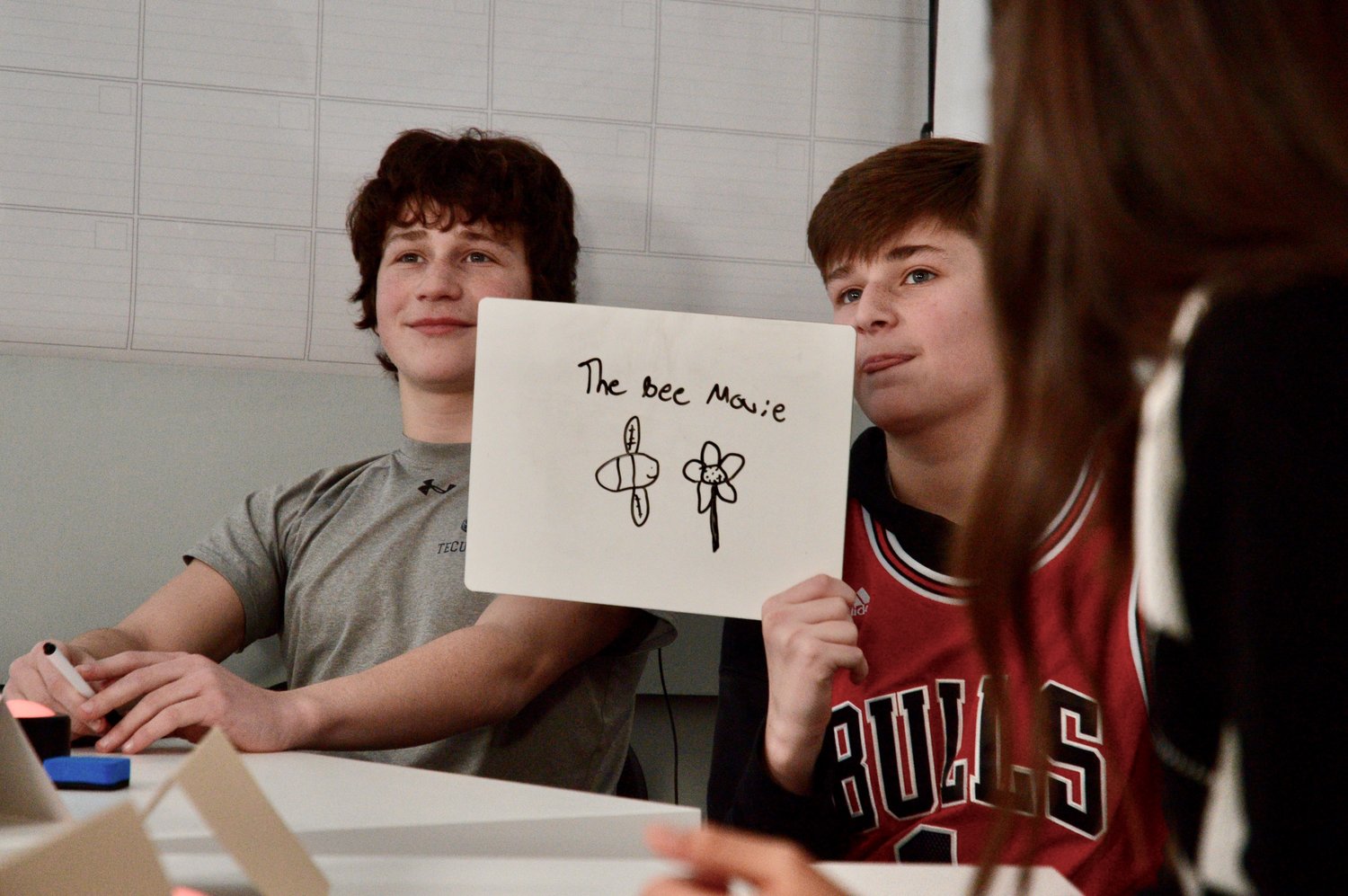 “Chat with Jack” host Jack Vouté (left) and his special guest, Ben Lopes, display their correct answer to the question: “In what movie did the characters Barry Benson and Adam Flayman make their home?” The PHS freshmen were playing “Are You Smarter Than a Fifth-Grader?” against two middle school girls, Stella Johnson and Layne Heelan.
Jim McGaw 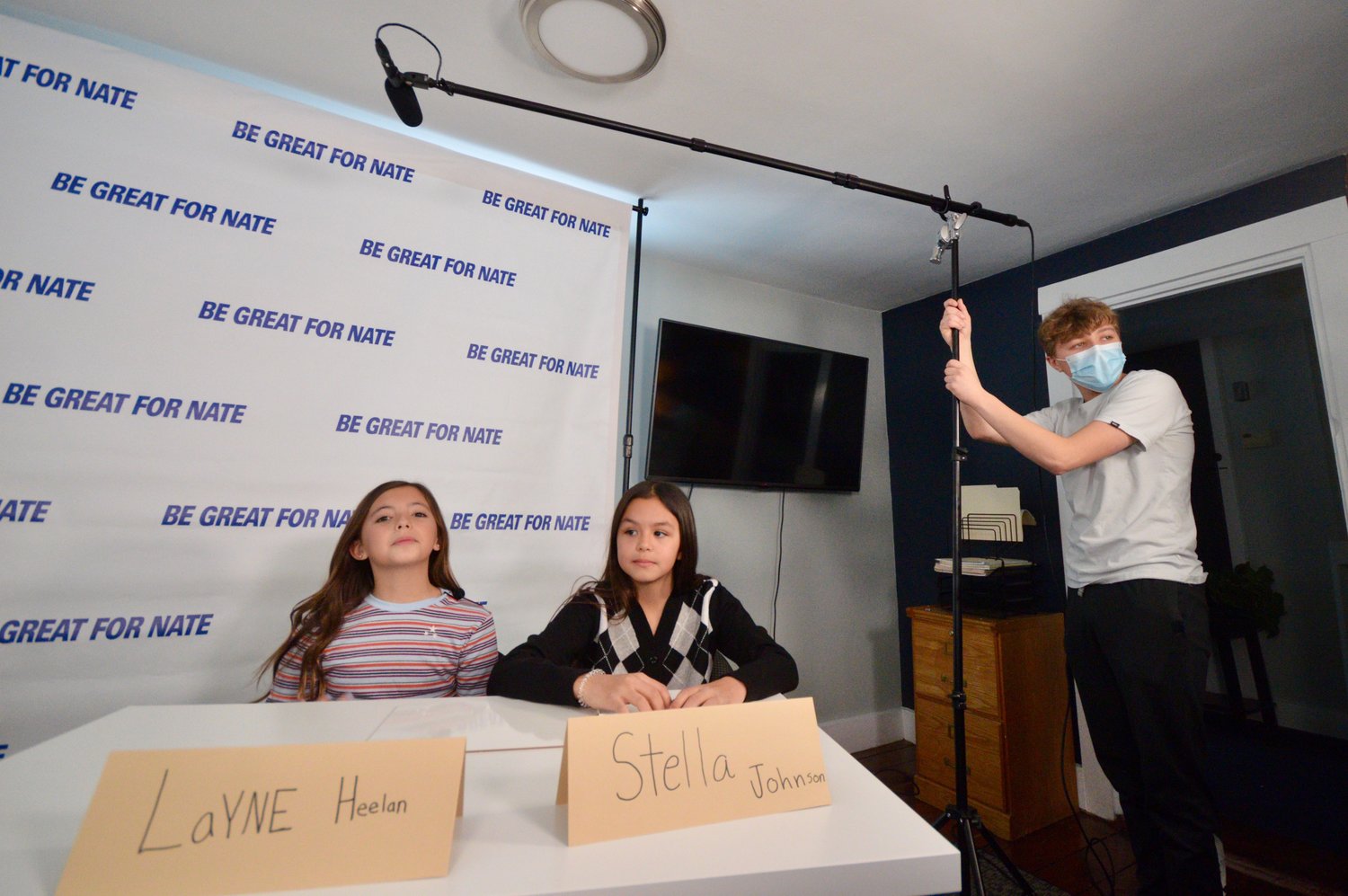 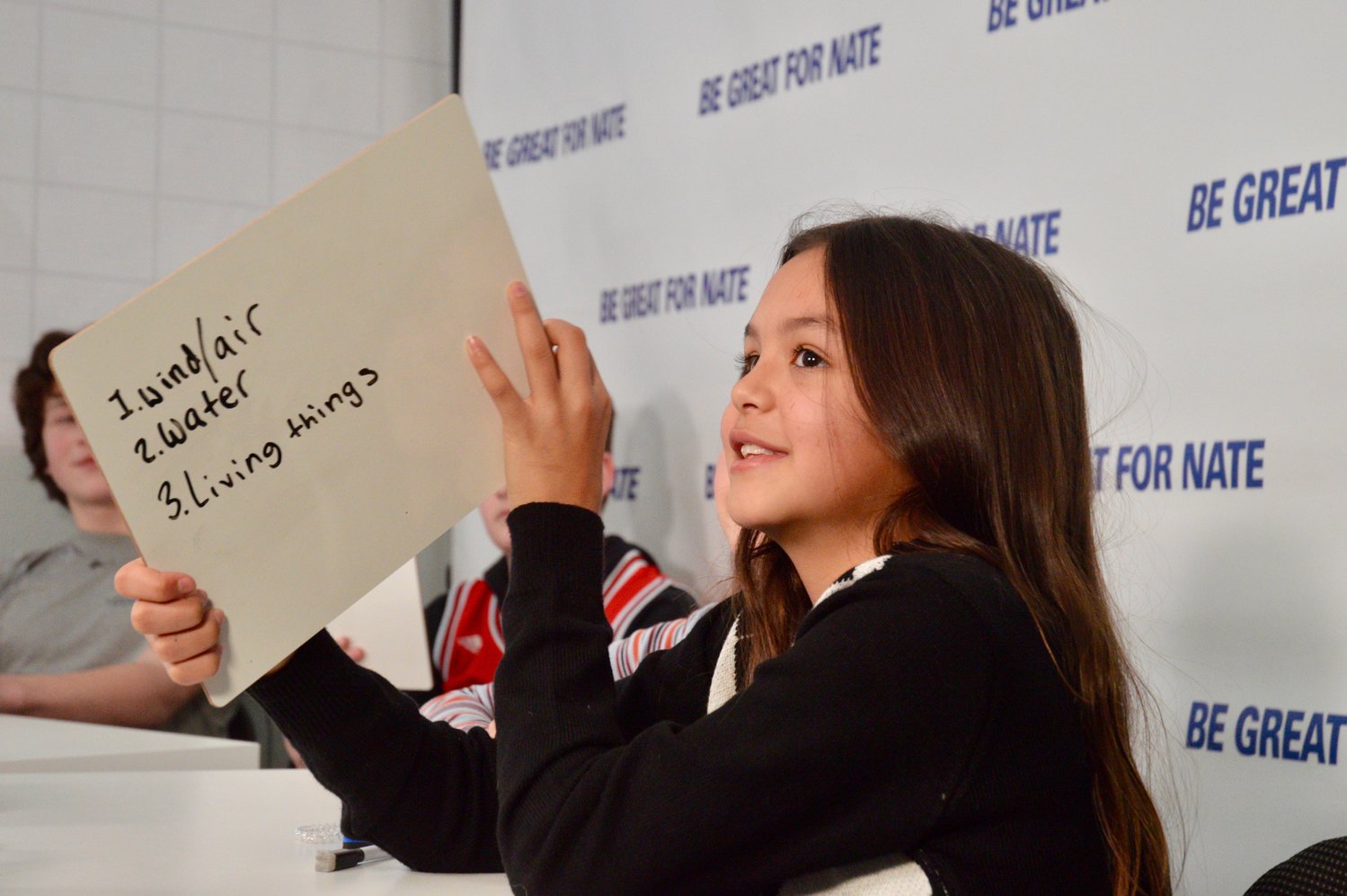 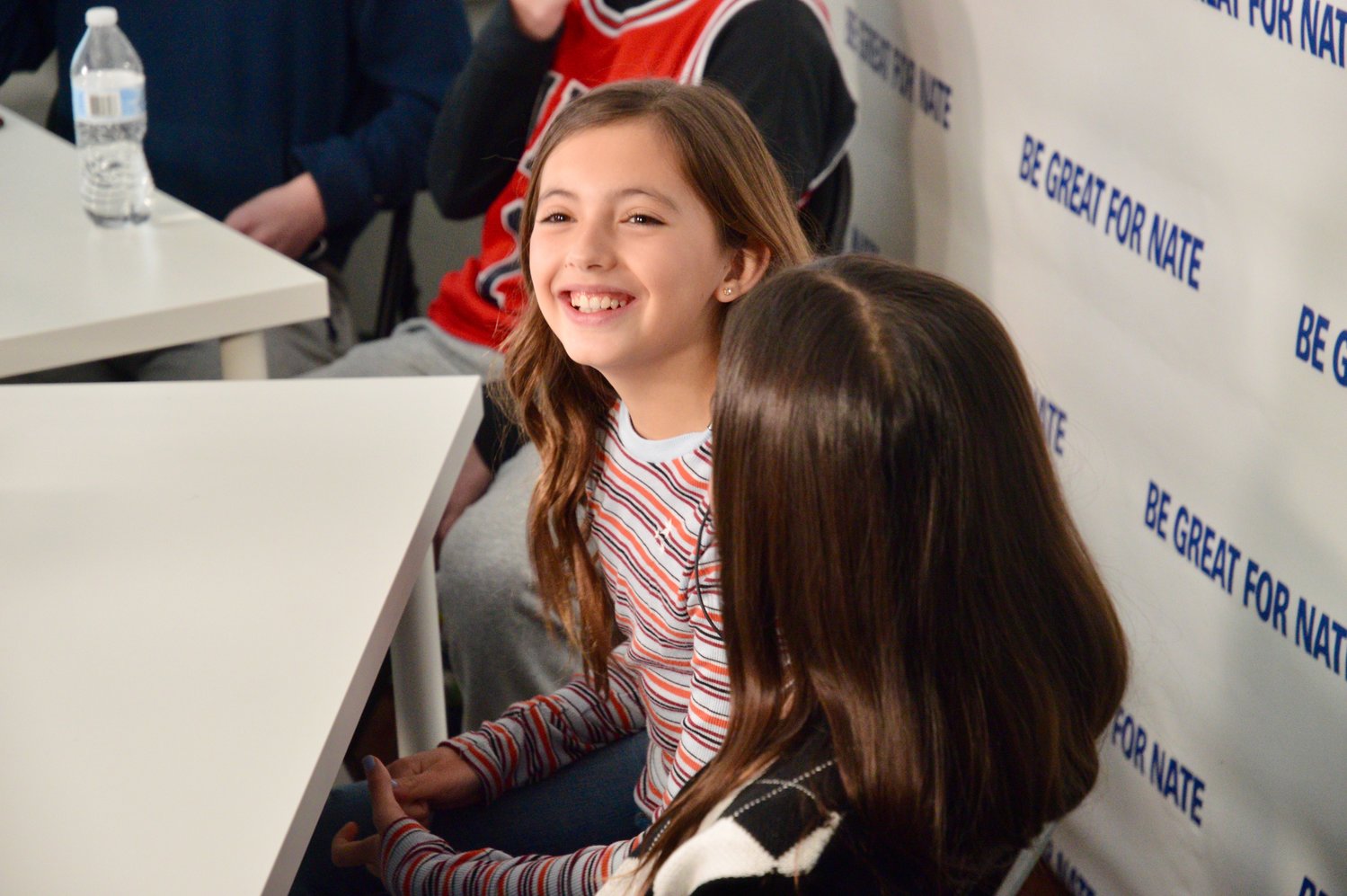 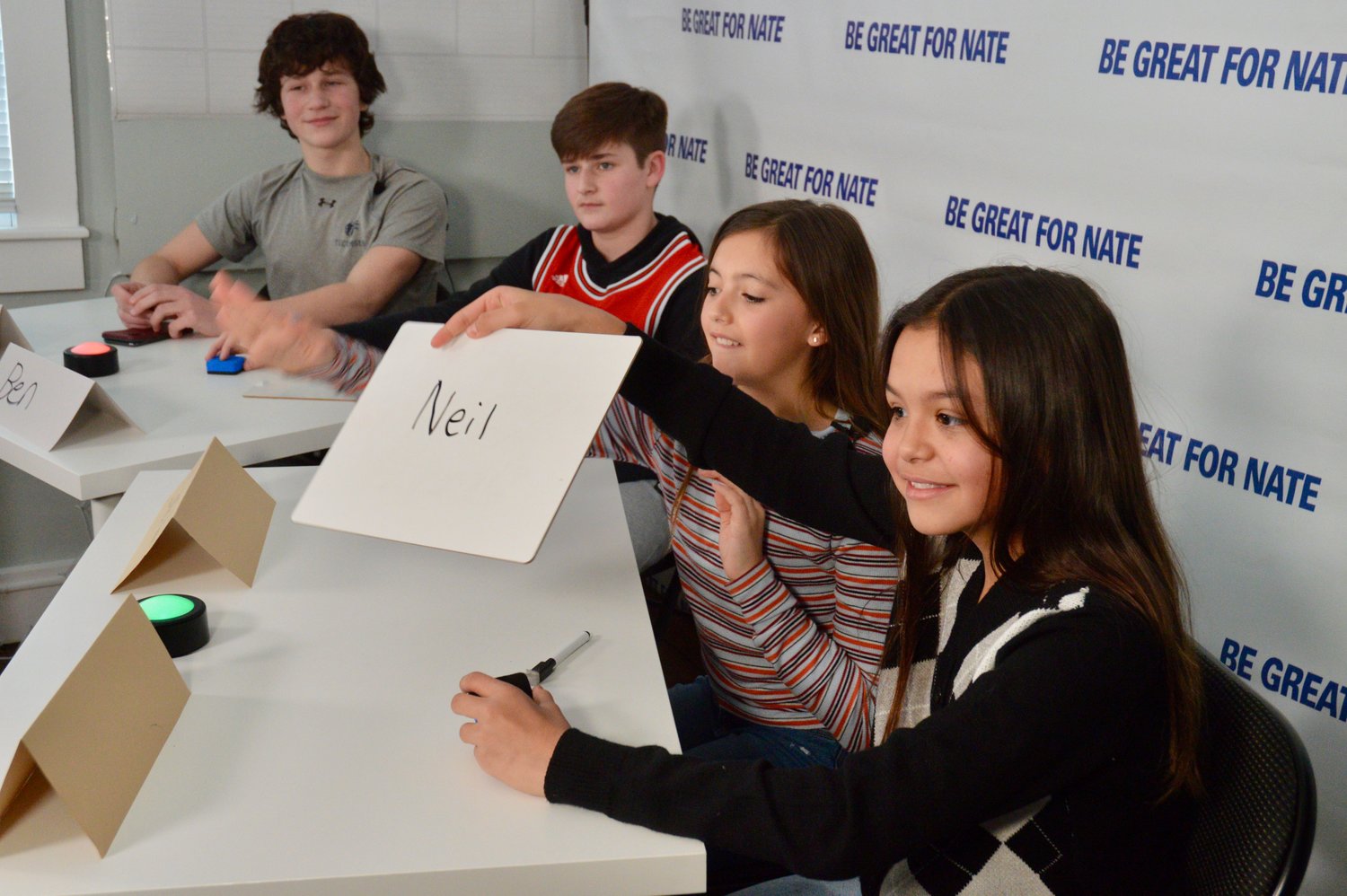 Layne and Stella display their answer to the question: “Who was the first member of One Direction to leave the band?” The correct answer was Zayn Malik.
Jim McGaw 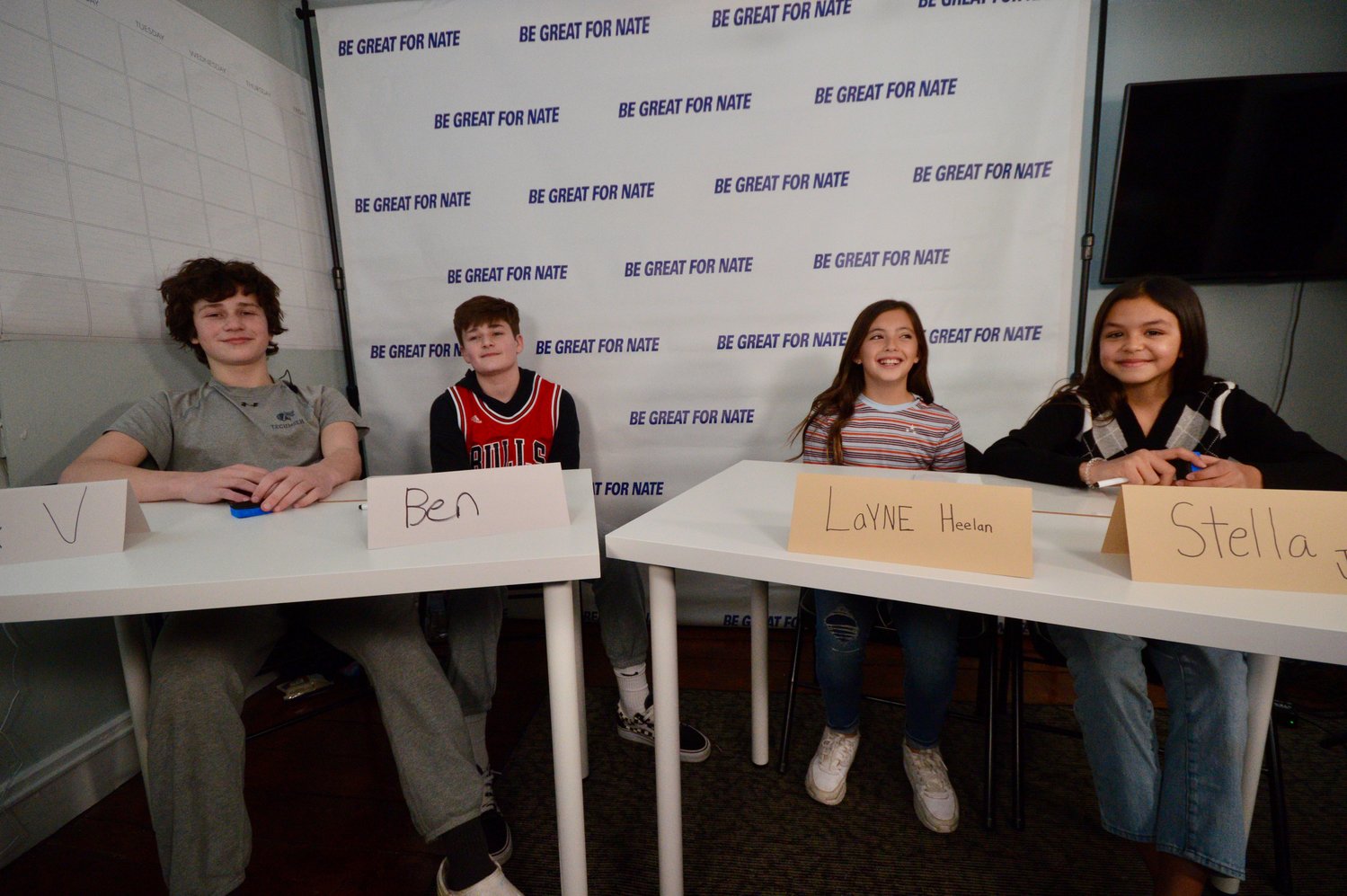 “Are You Smarter Than a Fifth-Grader?” contestants Jack Vouté, Ben Lopes, Layne Heelan, and Stella Johnson (from left) before the show started.
Jim McGaw 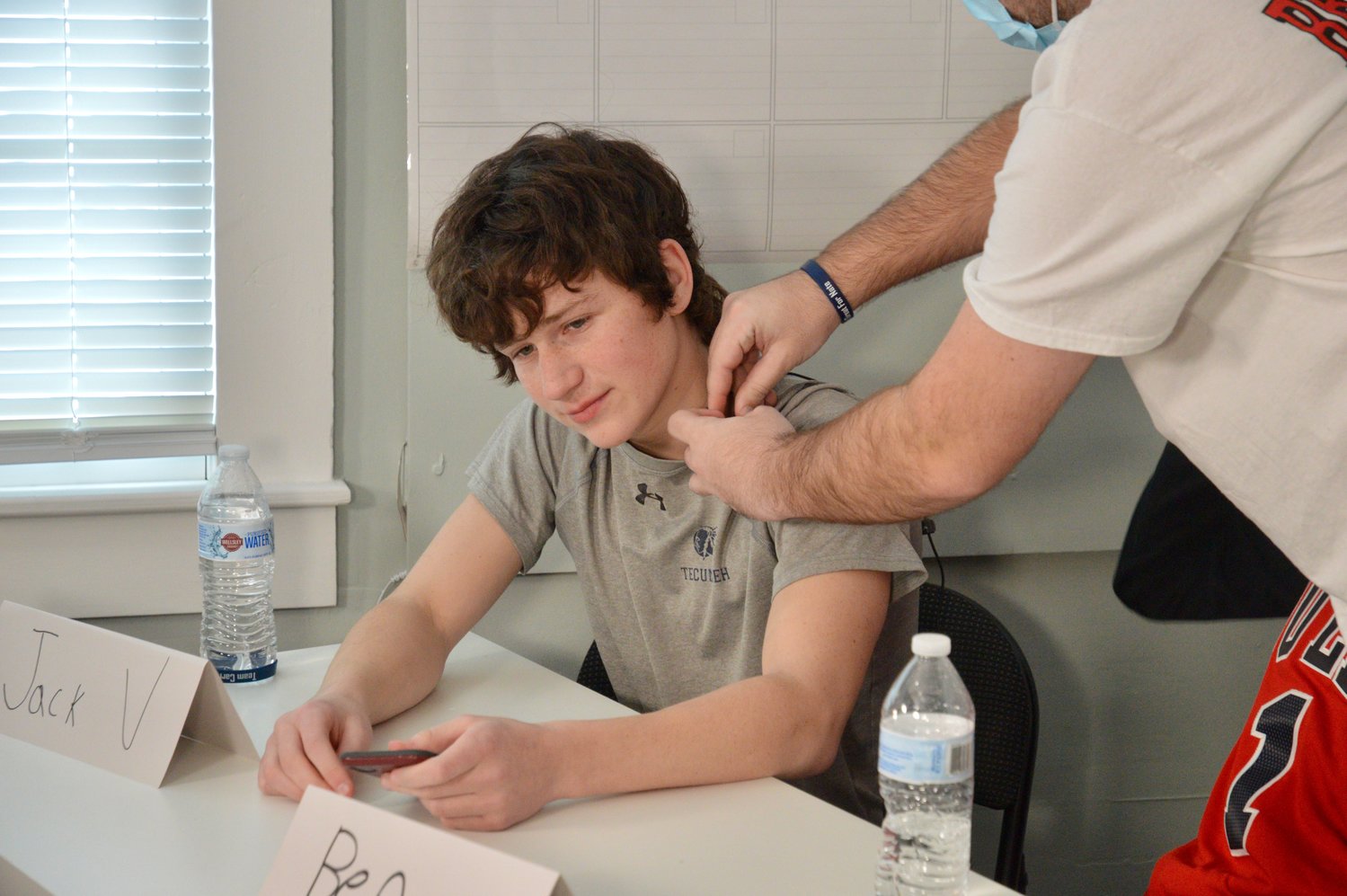 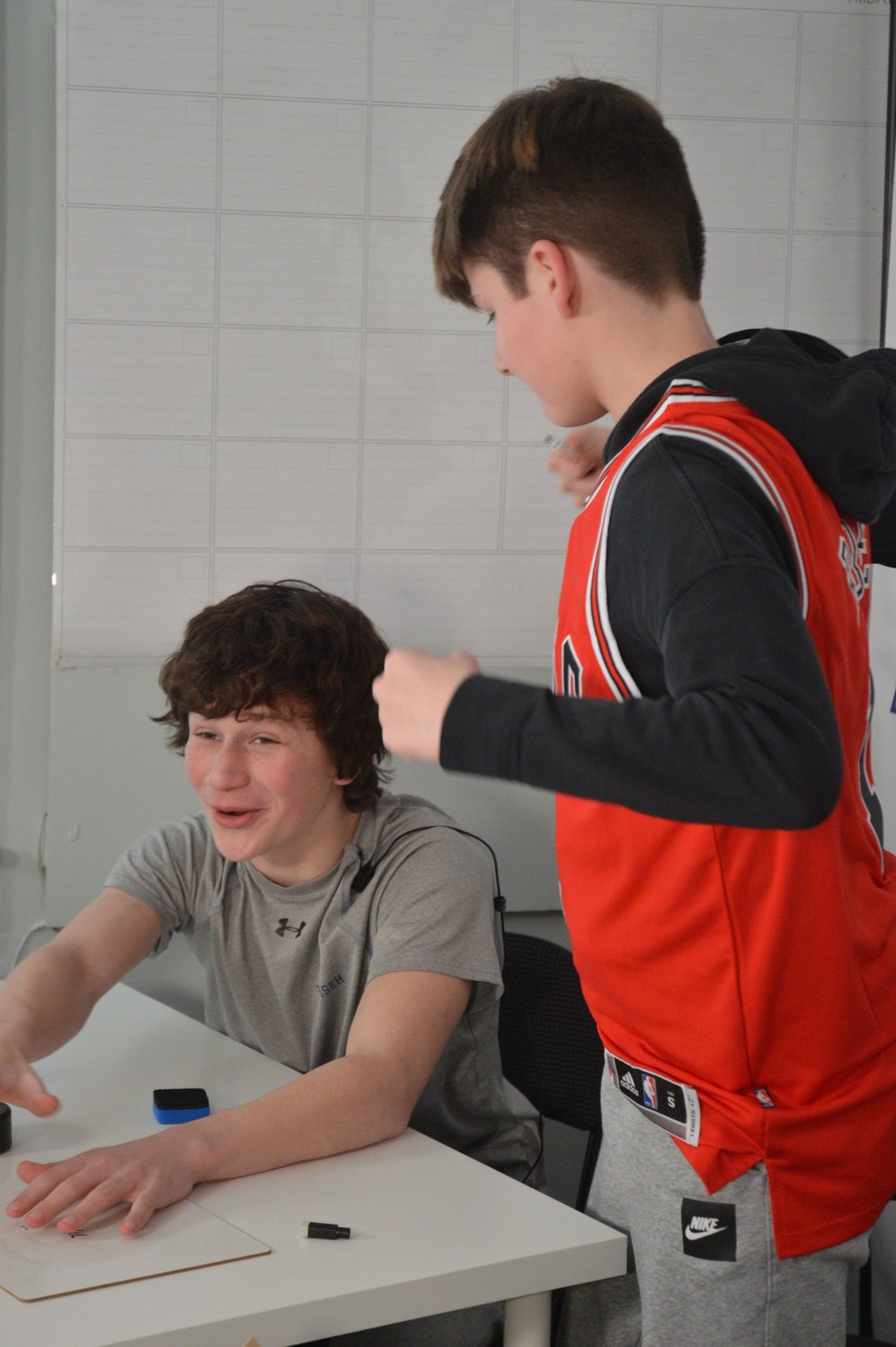 Jack and Ben celebrate after being declared the winners.
Jim McGaw 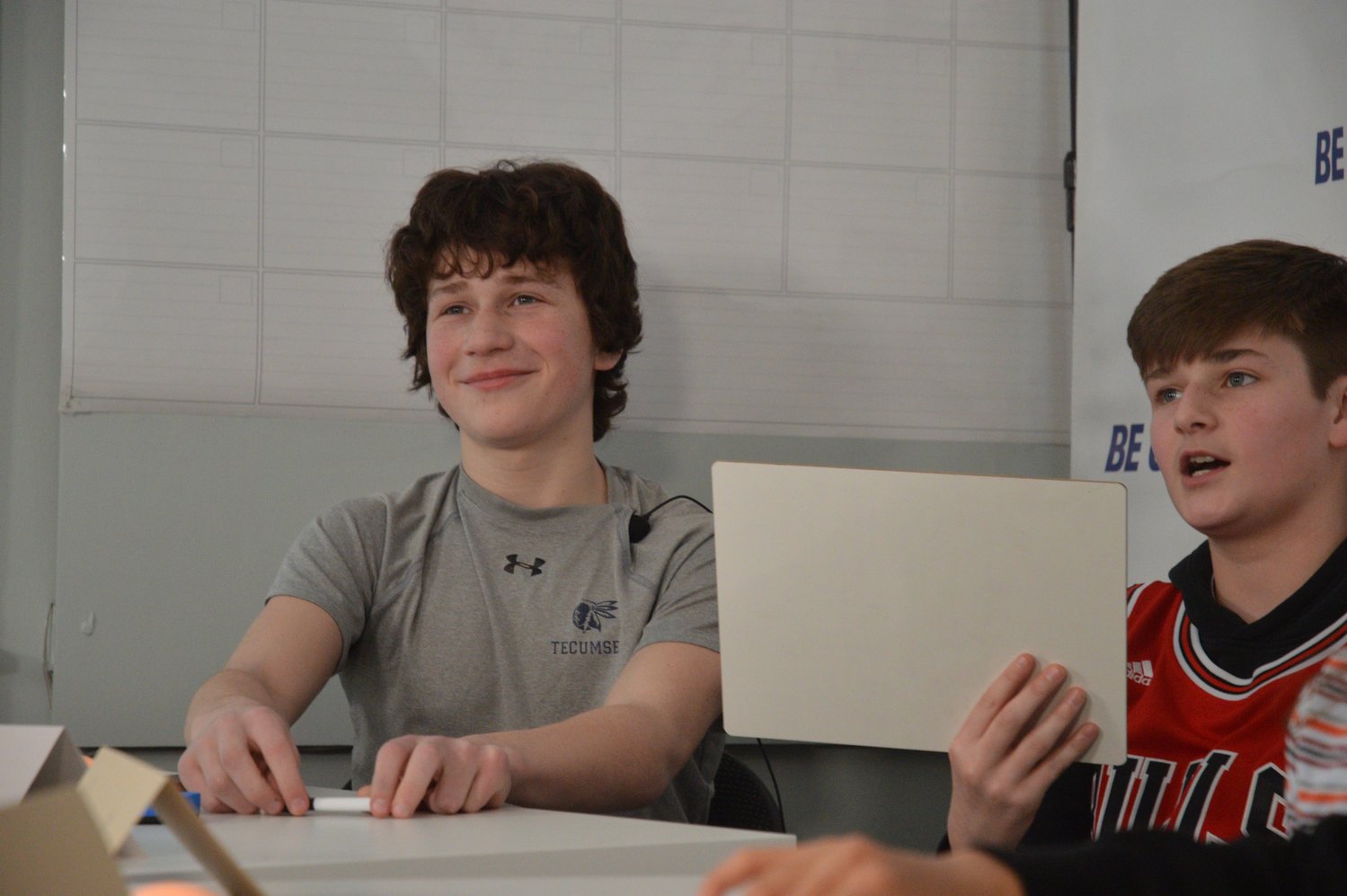 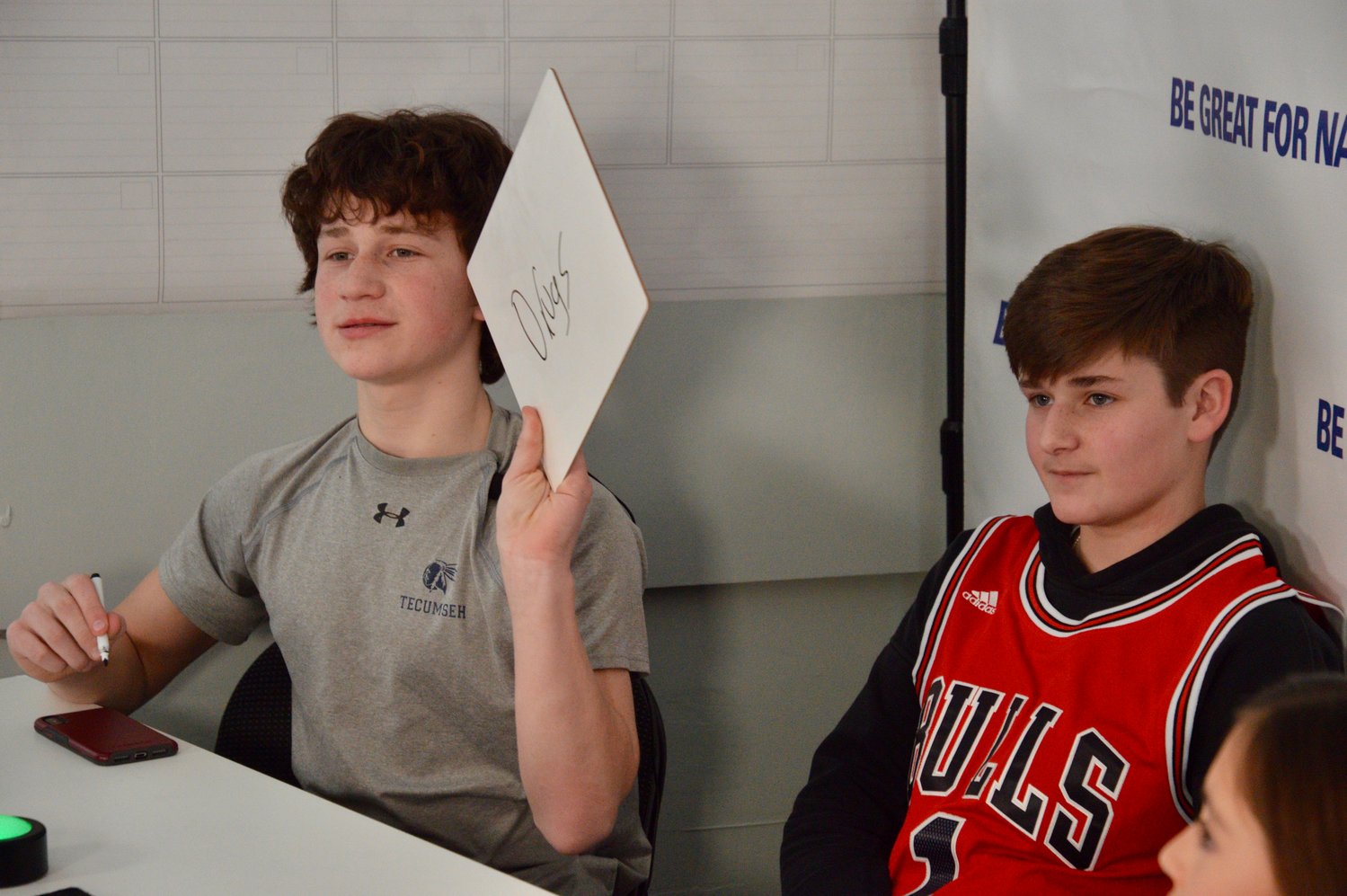 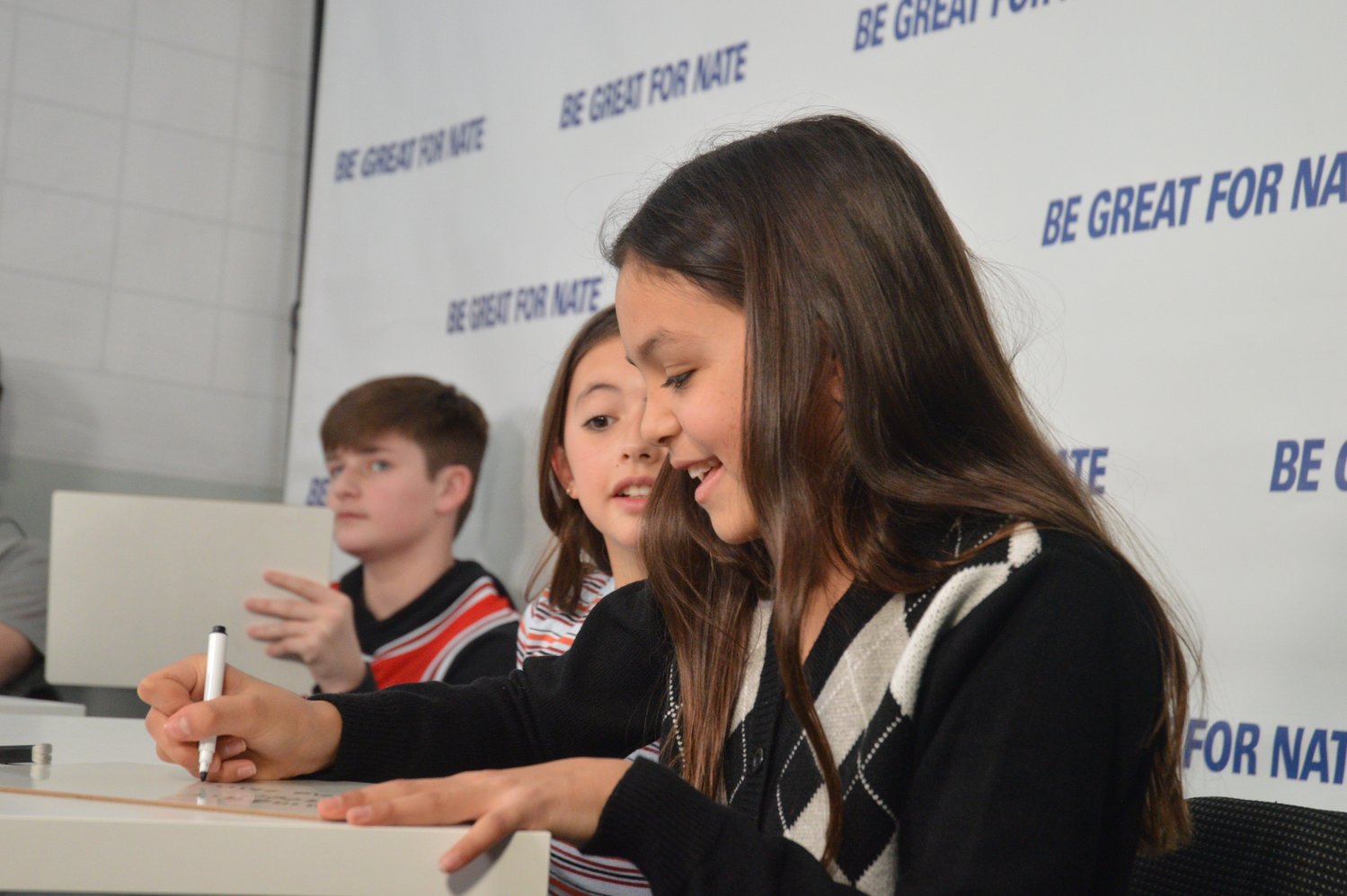 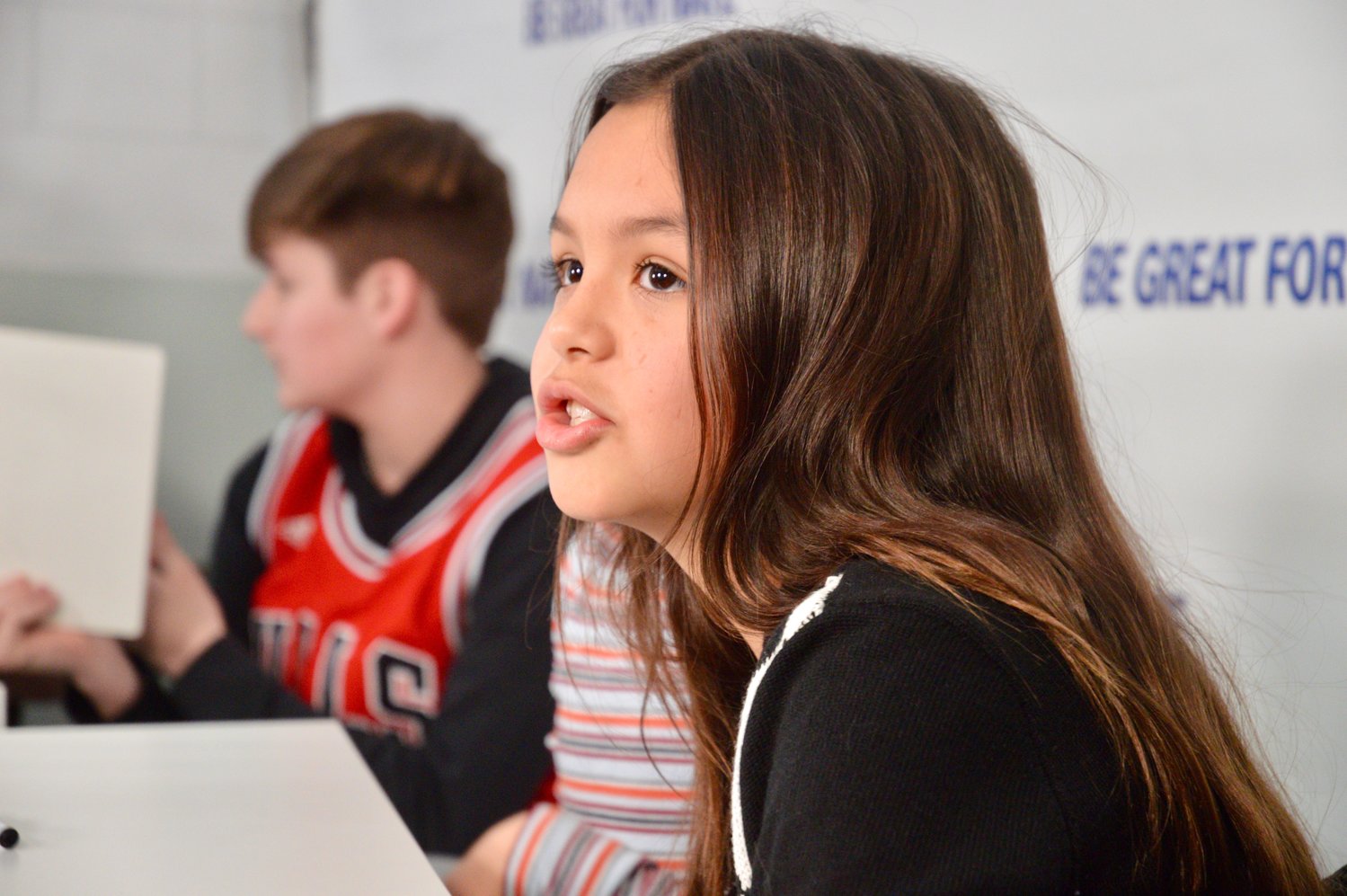 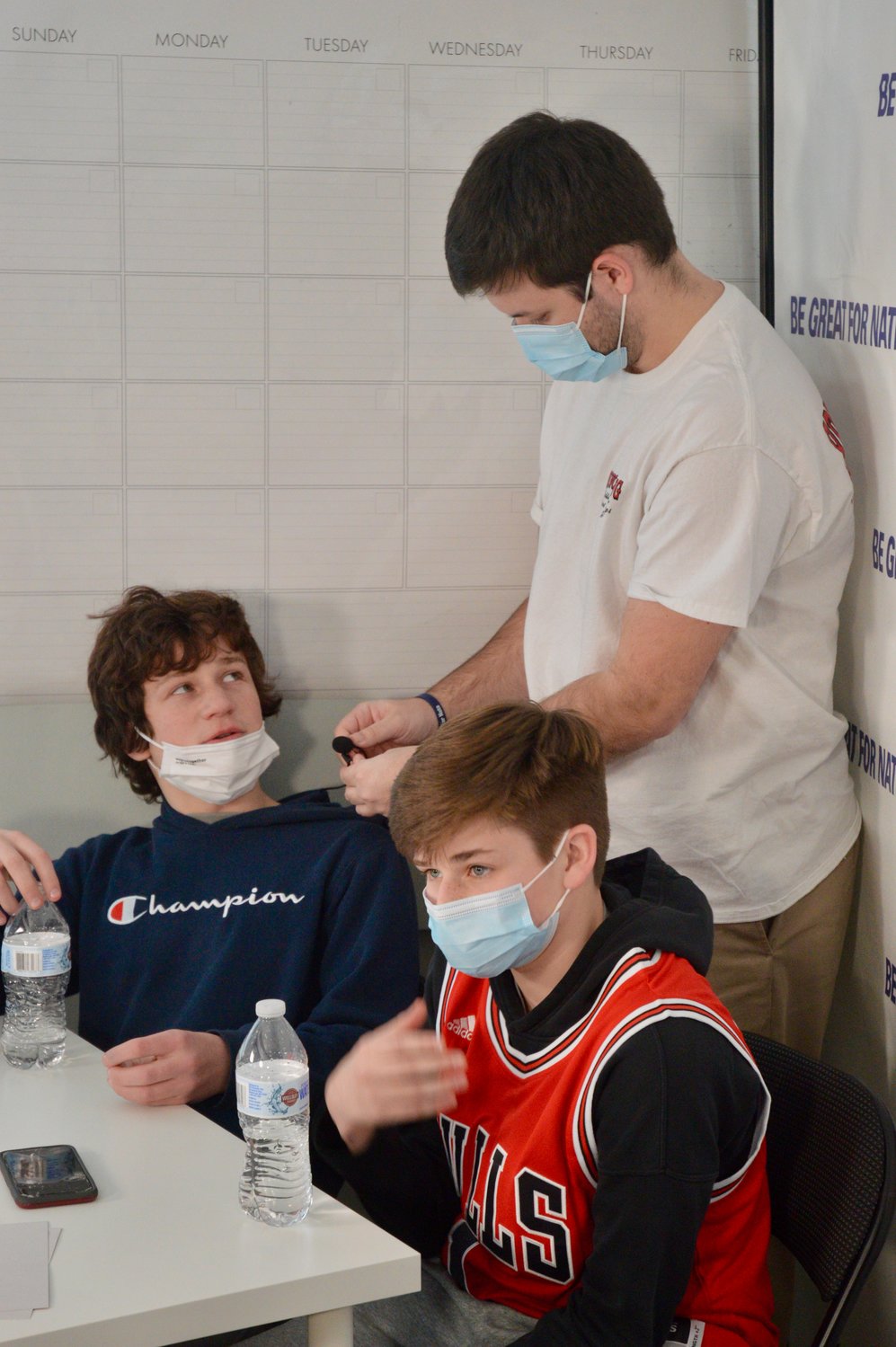 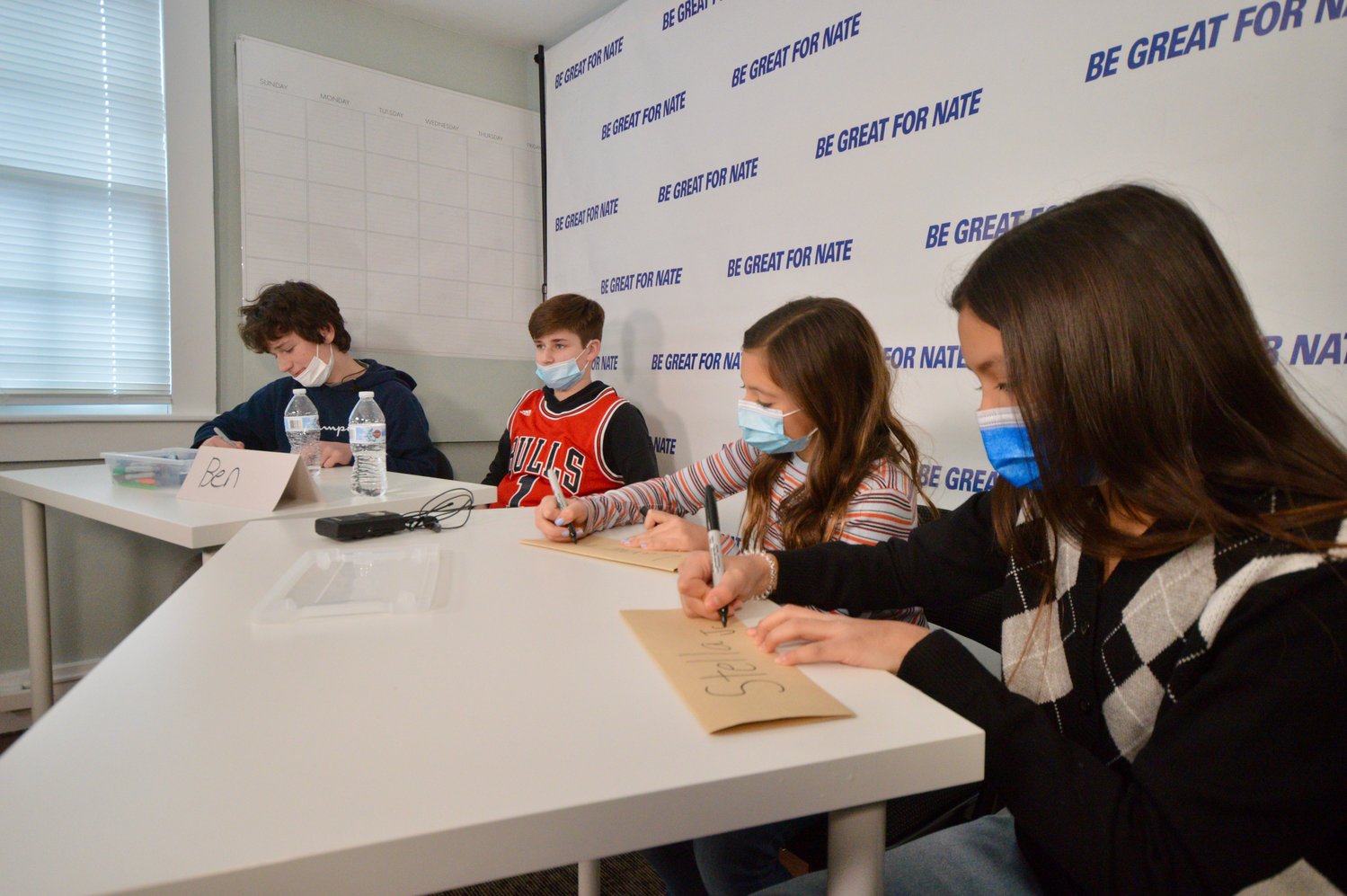 PORTSMOUTH — The smack-talk inside the cramped offices of Every Student Initiative (ESI) was flowing as freely as Mountain Dew from a glass.

In this corner: Jack Vouté, host of the ESI show “Chat with Jack,” and his fellow PHS freshman, Ben Lopes, as special guest. Their opponents: Layne Heelan and Stella Johnson, both fifth-graders at Portsmouth Middle School.

The contest: “Are You Smarter Than a Fifth-Grader,” which was recently filmed as a monthly installment of Jack’s series of online shows, which began in October.

The gamesmanship began when Steven Peterson, executive director of Be Great for Nate — the nonprofit umbrella organization for ESI — encouraged the four opponents to engage in some gentle ribbing to make the show more fun and lively.

He didn’t have to tell Ben twice.

“You’ve got no chance,” Ben told the girls, leaning over in his chair. He also suggested a “cool edit” after the taping in which ominous music is played over the girls’ introduction to suggest how “evil” they were.

The girls gave as good as they got, though. “You eat beans,” Layne spontaneously replied to Ben’s insult.

Jack squinted his eyes, momentarily at a loss for words. “Beans? What?” was his only response to Layne’s rejoinder.

Soon after the game began, there were more fireworks.

The girls started by picking their first category: math. The question, posed by the show’s producer, freshman Jay Humm: “What is the commutative property of math?”

The girls wore blank stares — they had no idea. Jack suggested it wasn’t “a real question,” and a student crew member who is taking calculus said he had no idea, either. So, they decided to pick another question for the girls.

But then Ben piped up.

“Wait, I have the answer!” he said, holding up his white board that showed a simple equation (such as “3 + 4 = 4 + 3”) that was an example of the commutative property.

But since the question had already been discarded, the boys didn’t get the steal.

The girls’ new question was “What is 53 times 1.2?” which they promptly answered correctly with 63.6, earning them one point for an early lead.

“We’re getting cheated out of the win, bro!” protested Ben, insisting the original question was indeed for fifth-graders as he recalled learning it four years earlier.

Ben then took it upon himself to announce the results of the first round. “Round One: Fifth-graders 1, us 0. They cheated,” he said, pointing to his opponents, who just giggled.

“Chat with Jack” got its start last fall. “Steve introduced it to me when I joined ESI because he thought I was the right person for it, and it’s just carried on until now,” said Jack.

ESI exists mainly to advocate for more mental health resources in schools, but it’s also big on providing young people with safe, healthy and creative outlets so they don’t make bad choices. That hasn’t been easy during a pandemic, so a lot of ESI’s work has moved online. (You can find “Chat with Jack” episodes on YouTube under the Be Great for Nate channel.)

Jack, who said he hosts the shows “to make the town a better place,” has done about five episodes so far. His favorite was the dancing episode he did with Jay and Jack Humm. “We were learning how to dance, and there was an instructor there,” he said.

Another show put Jack and two other boys — Henry Dutra and JJ Hurd — inside a kitchen, where they baked apple pies for the first time. After arguing over the best way to put the crust in the pans and the amount of cinnamon and sugar to use, the final results were judged by ESI President Hailey Pratt and Ellen Stack, both seniors. (Jack was proclaimed the victor, which took Henry by surprise: ”How did he win? His isn’t even cooked!”)

Besides encouraging other kids to try something outside their comfort zone — and showing that mistakes are inevitable and even OK — “Chat with Jack” also sprinkles bits of wisdom and and philosophy that ESI members have gained through their own training.

One category in the “Fifth-Grader” show was “Coping Skills,” which was tailor-made for ESI kids. “What is the worst maladaptive coping skill,” Jay asked the group.

“Mala-wala-what?” replied one of the girls.

The correct answer was “drugs,” earning the boys a point. Ben then expanded on how ESI members avoid harmful substances. “We stay together and join the Sub Team, which is a group of people that does not do substances,” he said, adding the group works with “younger kids to lead them down the right path.”

Sometimes, there are no right answers — just brief conversations to illustrate how kids need to open up more to one another. In the pie-making episode, for example, Jack asked his guests what stresses them out the most.

“Spanish class,” replied Henry, who later said mental health is a tough subject for boys to deal with because “boys don’t say what they really feel.”

JJ said he usually “goes for a run or skateboards” to deal with stress, and that he’s learned many other coping skills since joining ESI.

Besides producer Jay Humm — he’ll soon be hosting his own show, attending a girls’ slumber party to learn how females want to be treated by boys — the other members on the production crew for the “Fifth-Grader” show were Jacob Kalif, Lily Allan, Elliott Abong and Ally Casciano.

There was a main camera, two smaller handheld cameras up front, a boom microphone and more. There were lots and lots of false starts and flubbed lines which had to be scrapped, and for the “Fifth-Grader” episode Jack had to be prodded now and then to show more enthusiasm during his intros.

“You don’t know what it’s like to be the host!” Jack pleaded in his defense.

Mr. Peterson edits many of the episodes, which he said can be a chore. “You should see what I have to work with. We did three hours filming for the dance episode and I only got 10 minutes of usable footage,” he joked.

Boys come from behind

But after an initial bumpy start, everyone got into a groove and the girls went up 2-0 after correctly answering a social media question: “How many TikTok followers does Charli D'Amelio have?” (About 110 million, it seems. For the adults out there, D'Amelio, 16, was a competitive dancer for over 10 years before starting her social media career, and is now famous on TikTok.)

Jack and Ben made a strong comeback, however, and after 10 rounds the score was tied, 3-3. In the bonus round to decide it all, the contestants were given a sixth-grade question: “How many miles is the moon away from the earth?”

Ben slammed the white board down in victory. “Cheaters never win!” he exclaimed, apparently still holding a grudge from round one.

“Thank you, Layne and Stella for coming on the show,” said Jack as he wrapped things up. “They had no chance from the start. See you next time.”

Mr. Peterson then reminded the girls the show will also air on a local cable network, so they will be on TV.

Jan. 31 workshop will focus on future of Barrington's public schools