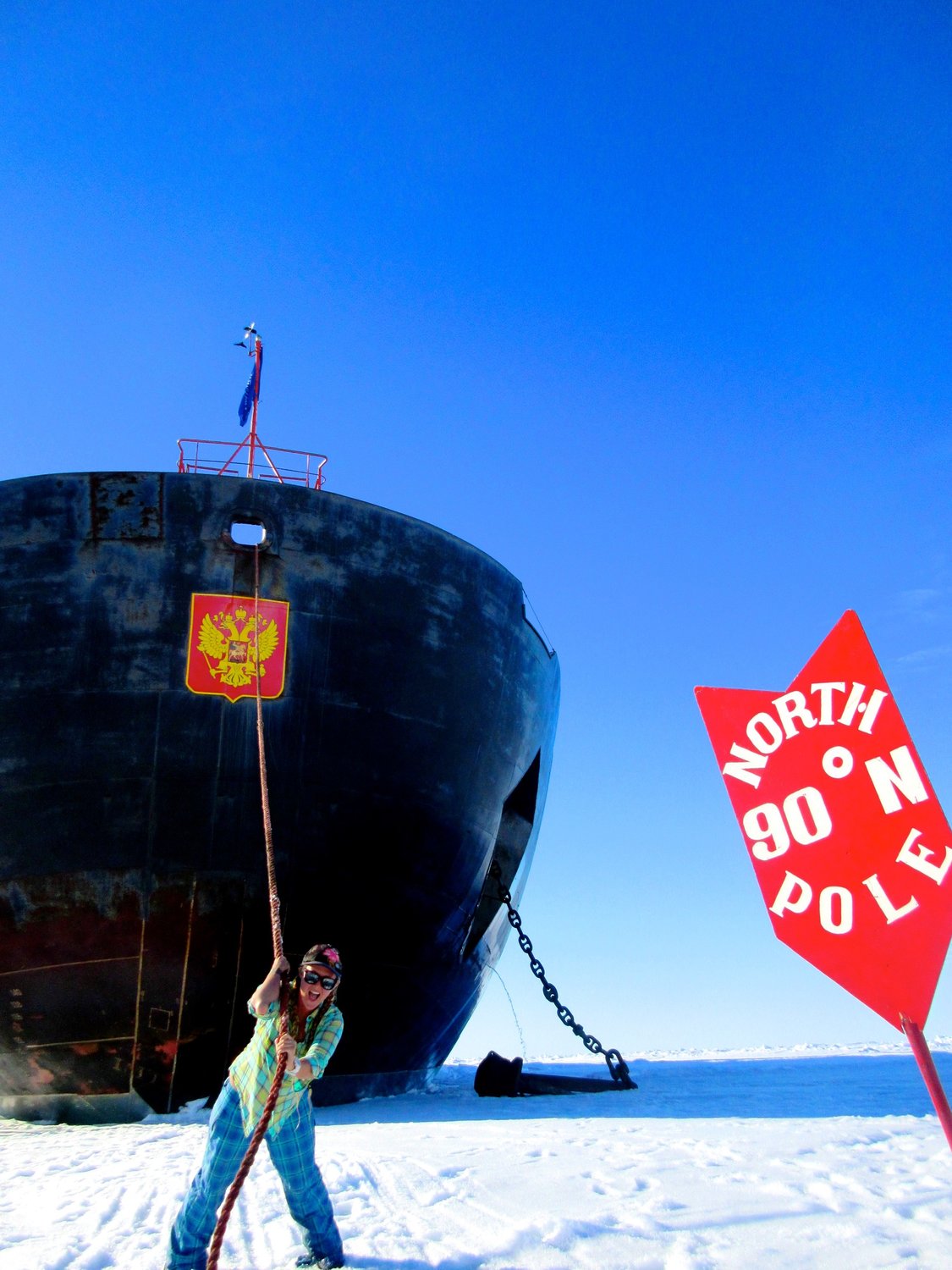 Breezy Grenier clowns around near an icebreaker at the North Pole during her trip in 2016.
COURTESY OF BREEZY OF GRENIER 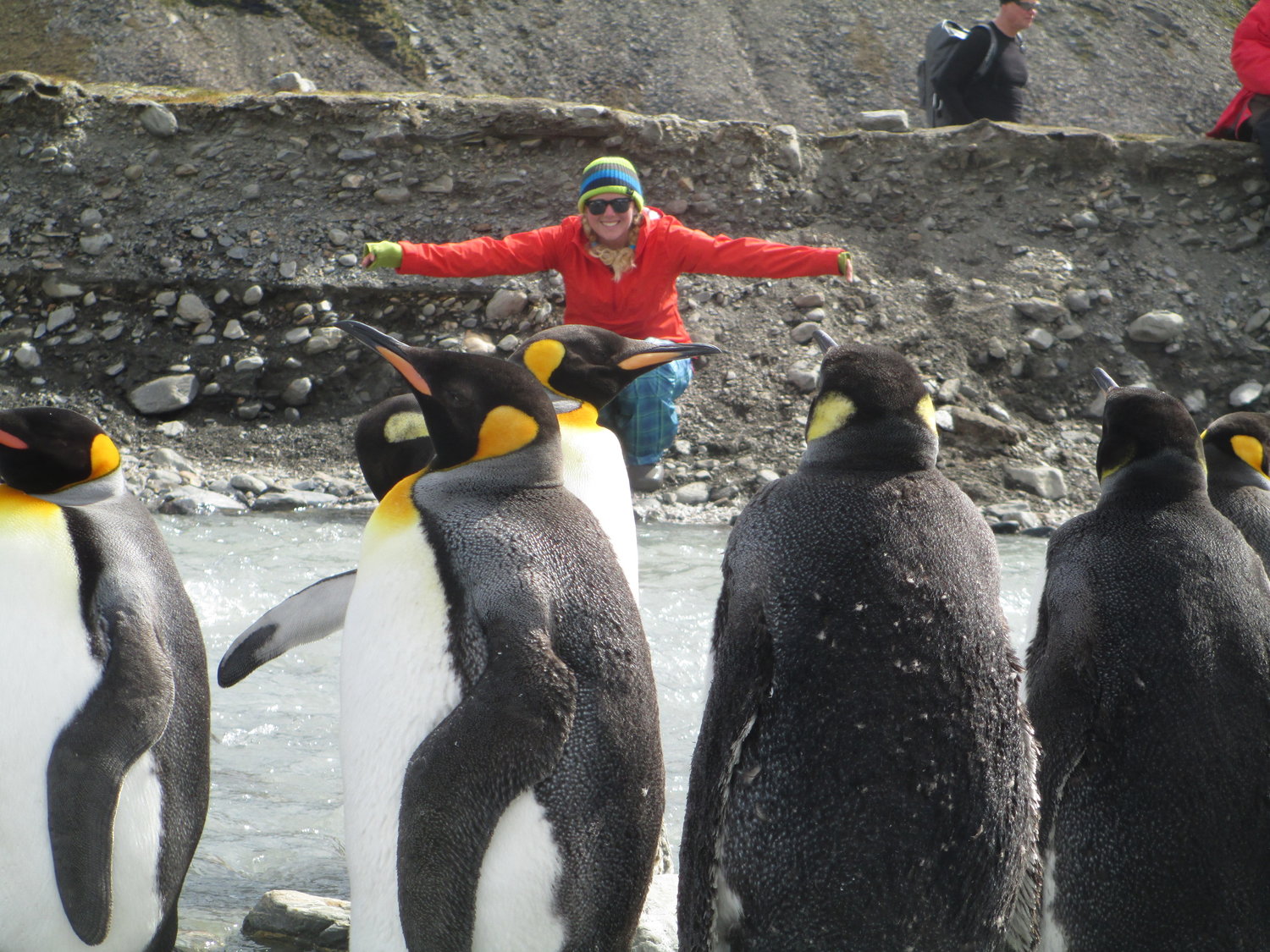 Saint Andrews Bay, which indents the north coast of South Georgia in the southern Atlantic Ocean, is a prime breeding area for king penguins, here being greeted by Breezy Grenier in 2013.
COURTESY OF BREEZY OF GRENIER
Previous Next
Posted Thursday, January 9, 2020 2:51 pm
By Kristen Ray

As a mariner, educator, scientist and explorer, her experiences span across the globe — from working aboard a Russia nuclear icebreaker as an onboard geologist; teaming up with Sedna Epic Expedition to snorkel the Northwest Passage in 2020; and assisting with seafloor mapping between the Marshall Islands and Guam.

By this stage in her life, Ms. Grenier has seen all 50 states and has been to every province and territory in Canada. Her travels have taken her to the geographic North Pole and Antarctica.

Yet her lifestyle is more attainable than some may think. By taking on contract work in favor of one full-time position, Ms. Grenier has positioned herself to be able to accept some once-in-a-lifetime opportunities.

“I wouldn’t have been able to go on them if I had a full-time job,” she said.

Not only has that approach taken Ms. Grenier around the world, but it has also allowed her the flexibility to be home when she needed to be; her longest jobs, she said, usually go for two months. Though it took a couple of years to land steady, consistent work, Ms. Grenier has proven it’s possible to make a living through contract work.

“You can make it into your own career,” Ms. Grenier said.

Another way that students can set themselves apart, Ms. Grenier said, is by developing a diverse skillset; she’s listed everything from cell-culturing to operating a forklift on her website.

One way she has been able to do so is through certificate training and continuing education, such as her SEA (Sea Education Association) Semester abroad in New Zealand. She also emphasized the importance of relearning a number of trade and life skills, such as driving manual and knowing how to sew. The high school age group, she added, also had a number of scholarships and internship programs available to them

Yet students should not feel limited to opportunities only within the United States; sometimes it’s cheaper, Ms. Grenier said, to take an experience outside of the country, like skiing in Europe as opposed to flying to Colorado.

“I get paid to do things that I like,” she said. “It really pays off.”

While it may be exciting to think about big adventures abroad, both Ms. Grenier and oceanography teacher Elaine Amaral encouraged students to also consider opportunities available to them locally. While in high school, Ms. Grenier got involved in her community by working as a student researcher for Project CLEAR for the Candlewood Lake Authority.

In and around Portsmouth, Ms. Amaral said, students could get make connections working at a boat launch, or simply volunteering at an organization that is of personal interest, like a gardening center or senior home. Whatever they chose to do, though, Ms. Amaral urged them to be present — not glued to their phones.

Locally, Ms. Amaral pointed students to groups like Clean Ocean Access, while Ms. Grenier shared a number of national and international organizations they could keep an eye on, such as the Explorers Club, Geological Society of America and Marine and Oceanographic Technology Network. It was important, she said, for students to keep tabs on the different opportunities those groups posted; they may never know which ones catch hold.

“I’ve been told no for thousands of opportunities,” Ms. Grenier said. “But the ones that I’ve been accepted to are life-changing.”