Portsmouth solar facility denied — but will get a second chance

‘It probably would have passed’ if full board was present, chairman says of West Main Solar 1’s proposal

PORTSMOUTH — In a highly unusual move last week, the Planning Board voted to deny a proposal for a controversial, large-scale ground-mounted solar facility along West Main Road, only to …

Portsmouth solar facility denied — but will get a second chance

‘It probably would have passed’ if full board was present, chairman says of West Main Solar 1’s proposal 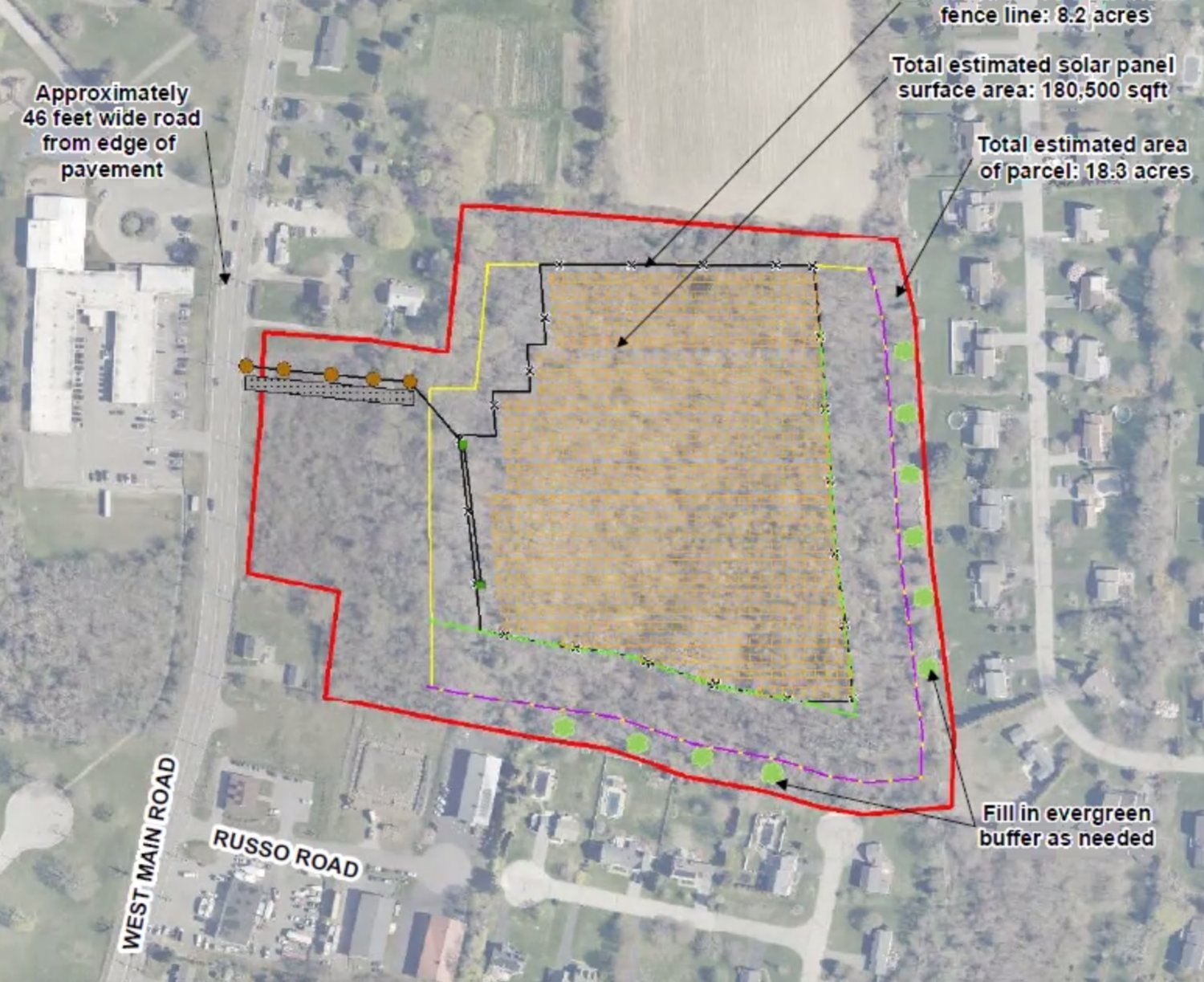 Aerial view shows location of a proposed 3.16-megawatt, direct-current (DC) ground-mounted solar photovoltaic (PV) development on property less than a 10th of a mile north of Russo Road on the east side of West Main Road.
Posted Thursday, December 16, 2021 11:01 am
By Jim McGaw

PORTSMOUTH — In a highly unusual move last week, the Planning Board voted to deny a proposal for a controversial, large-scale ground-mounted solar facility along West Main Road, only to reconsider its action just minutes later and continue the hearing to January.

That means West Main Solar 1, which is proposing a 3.16-megawatt solar photovoltaic facility across from Melville Elementary School, just north of Russo Road, will have another crack at final approval of its plan on Jan. 12, 2022.

The decision, which essentially amounted to a vote “do-over,” seemed to stun abutters of the project, who were ready to celebrate before being told to come back next month.

Here’s how it went down:

West Main Solar 1 received preliminary approval for its petition, subject to seven conditions, on Oct. 13, and its final plan application was first heard by the board on Nov. 10. The hearing was continued to Wednesday, Dec. 8, when the developers made additional concessions concerning setbacks and buffering to appease abutters.

At full strength the Planning Board has seven members, but only five were present last week. After hearing from experts speaking on behalf of the developer and then from abutters, the board voted 3-2 in favor of the petition. Ryan Tibbets, David Garceau and Edward Lopes, Jr. voted in the affirmative, while Chairman Luke Harding and Seth Pilotte were opposed.

A simple majority, however, wasn’t enough for approval.

A surprised Scott Milnes, the developer and president of Equinox Renewables Inc., expressed his disappointment to the board. “We’ve done a lot to satisfy the abutters,” Milnes said.

The vote also appeared to stun Harding, despite the fact he opposed the petition himself. At several points during the hearing, he had braced opponents of the project for potential disappointment. The property is zoned industrial, Harding reminded them, and “big steel buildings” could go up instead.

“I feel for you, but there is only so much we can do,” Harding told abutters, later adding the board’s “hands are tied on certain things.”

Immediately after the vote, he lamented that if the other two members had been present, the application “probably would have passed,” and that the “petitioners have done due diligence.”

He then rested his head in his hands and, after a long pause, called for a five-minute recess.

Board members huddled during the break, and when the meeting was called back into session Mr. Pilotte made a motion to reconsider the vote and to continue the meeting to January, which was approved unanimously. (Under the meeting rules, only a member who voted in the minority could make that motion, and it had to be someone other than the chairman.)

“See you next month,” Harding said.

‘Out of respect for Guy’

After the meeting, Harding explained the decision to take another vote next month.

“When you have a board that’s supposed to be seven, and you don’t have even close to that, it’s not really that board,” he said. “I could have, to satisfy my own self, I could have made it go my way. Out of respect for Guy Bissonnette, who put his heart and soul into that petition — he’s always a very fair guy — I wanted to honor the way he thought and the way he treated this board. I felt it needed that one chance. I was trying to respect all the hard work and time he put into it.”

Bissonnette, who normally sat as Planning Board chairman, was one of two members absent from the meeting, along with Kathleen Wilson.

Asked what could happen with the re-vote next month assuming that Wilson and Bissonnette are present, Harding replied, “He’s not coming back.”

Turns out that Bissonnette abruptly resigned from the Planning Board earlier this month, effective immediately. In a Dec. 3 letter to the Town Council, he said after “well over a decade of service as a member of the Portsmouth Planning Board, I have decided that it is time for me to move on.” The council voted to accept his resignation with regret Monday night.

“We couldn’t bring that up; it wasn’t part of the meeting,” Harding said of Bissonnette’s resignation. “We have no idea why. All I know is we got the notice. I can’t speculate.”

The town will have to advertise for applicants and appoint someone to replace Bissonnette, but that takes time. The board will most likely have just six members at next month’s meeting — assuming everyone’s there.

“If Kathleen does not show up, then the decision — unless something changes — will stand,” said Harding, noting that he has no intention of switching his vote. A 4-2 vote would approve the application, while a 3-3 vote would mean it’s dead.

As for why he voted against the project, Harding said his biggest problem was the amount of trees the developers planned on clearing.

“We have a rule that you can’t take that much forest out; there’s a certain percentage, like 20-something percent. If we set that precedent — it’s OK for this one, but not the next one — it’s just not fair. I have to speak from my heart,” he said.

Pilotte expressed a similar objection immediately following the vote. “I know it’s zoned industrial and you can do what you want,” he said. However, under the solar ordinance, developers must minimize any impact to the property, and he didn’t feel that was done here.

“Maybe this is not the right place for this,” Pilotte said.

The Planning Board isn’t the only town panel dealing with a lack of available members. The Zoning Board of Review’s monthly meeting scheduled for Thursday, Dec. 16, was canceled on Tuesday due to an anticipated lack of a quorum. The meeting was rescheduled to Thursday, Jan. 20.