PORTSMOUTH — You may have been feeling a bit toasty over the past month, but it’s unlikely you experienced the heat and humidity quite like Robert Pires. 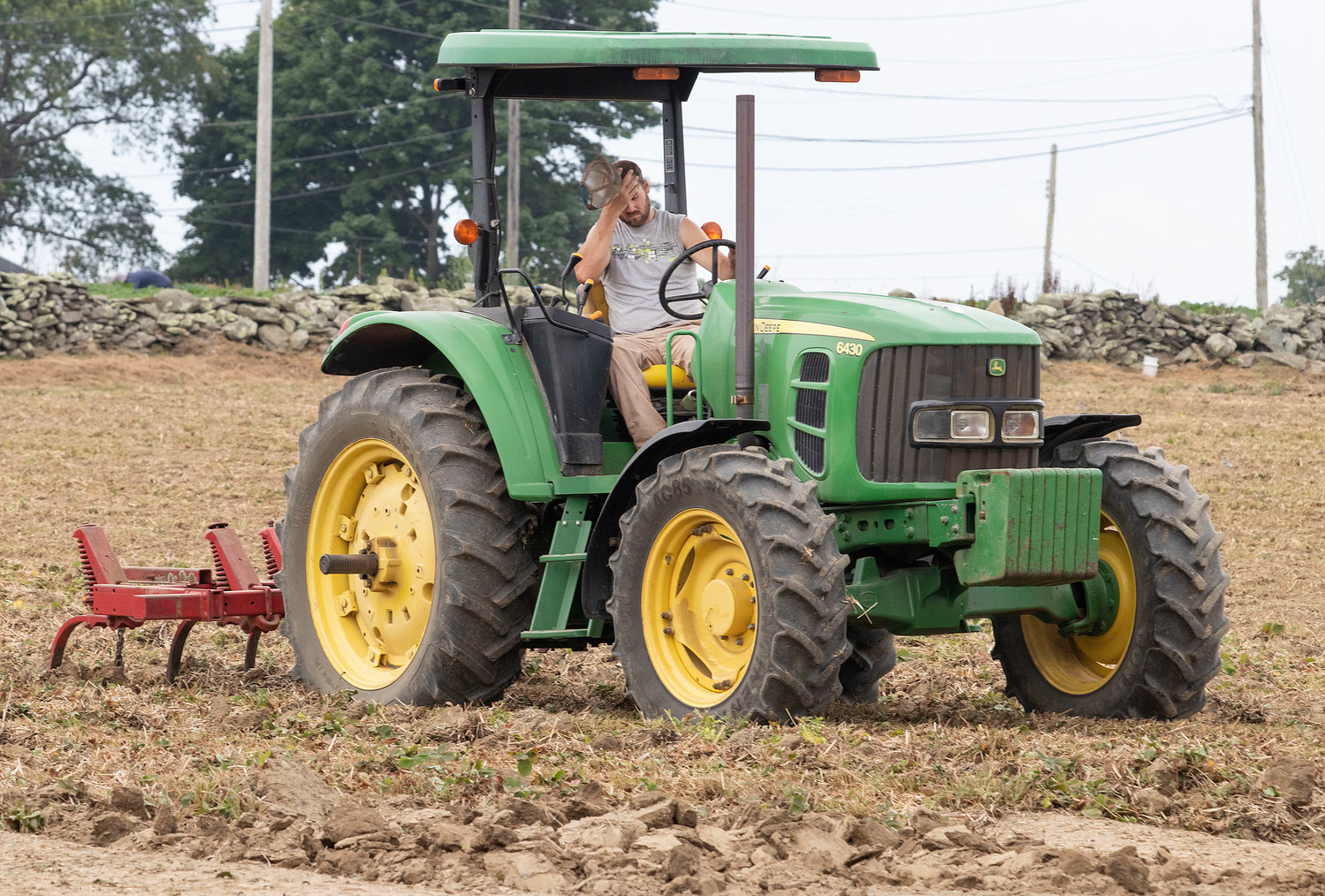 Mike Flynn of Quonset View Farm on Middle Road wipes his brow last Friday as he rotates the strawberry field’s soil in preparation for next season. The farm has been experiencing “severe drought conditions” and irrigating is expensive, Flynn said.
RICHARD W. DIONNE, JR. 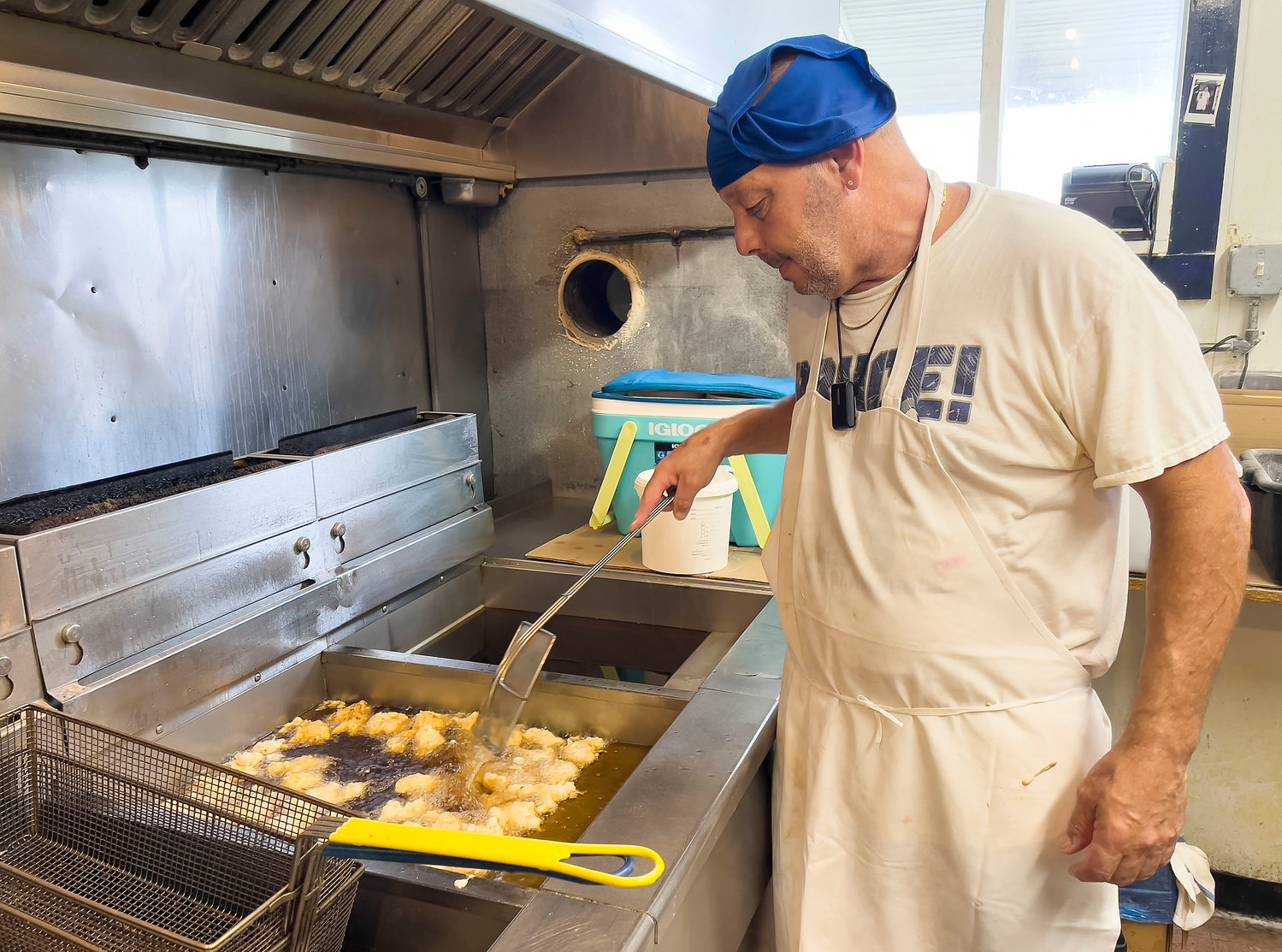 Robert Pires, the kitchen manager and head chef at Flo’s Drive-In on Park Avenue, prepares a batch of clamcakes inside the shack’s small kitchen, which often hits 110 degrees. “You don’t get a break here. We just have to keep on working through it,” he said.
RICHARD W. DIONNE, JR. 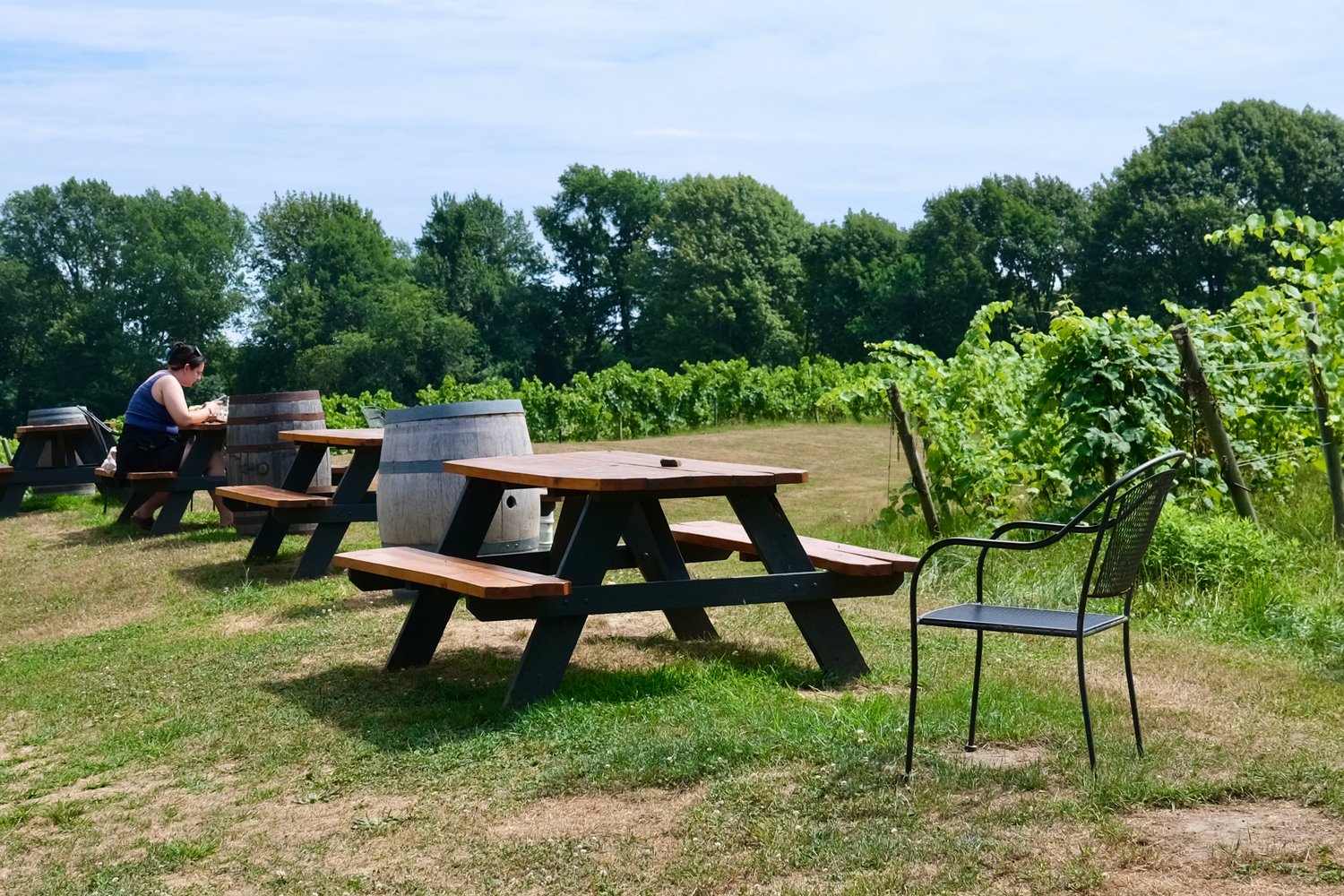 The lack of rain hasn’t hurt the grape vines at Greenvale Vineyards, which love the sunshine. “We do not water,” said Nancy Parker Wilson, general manager.
Jim McGaw

Will Walker runs a batch of fries through the fryolator at Flo’s Drive-In. 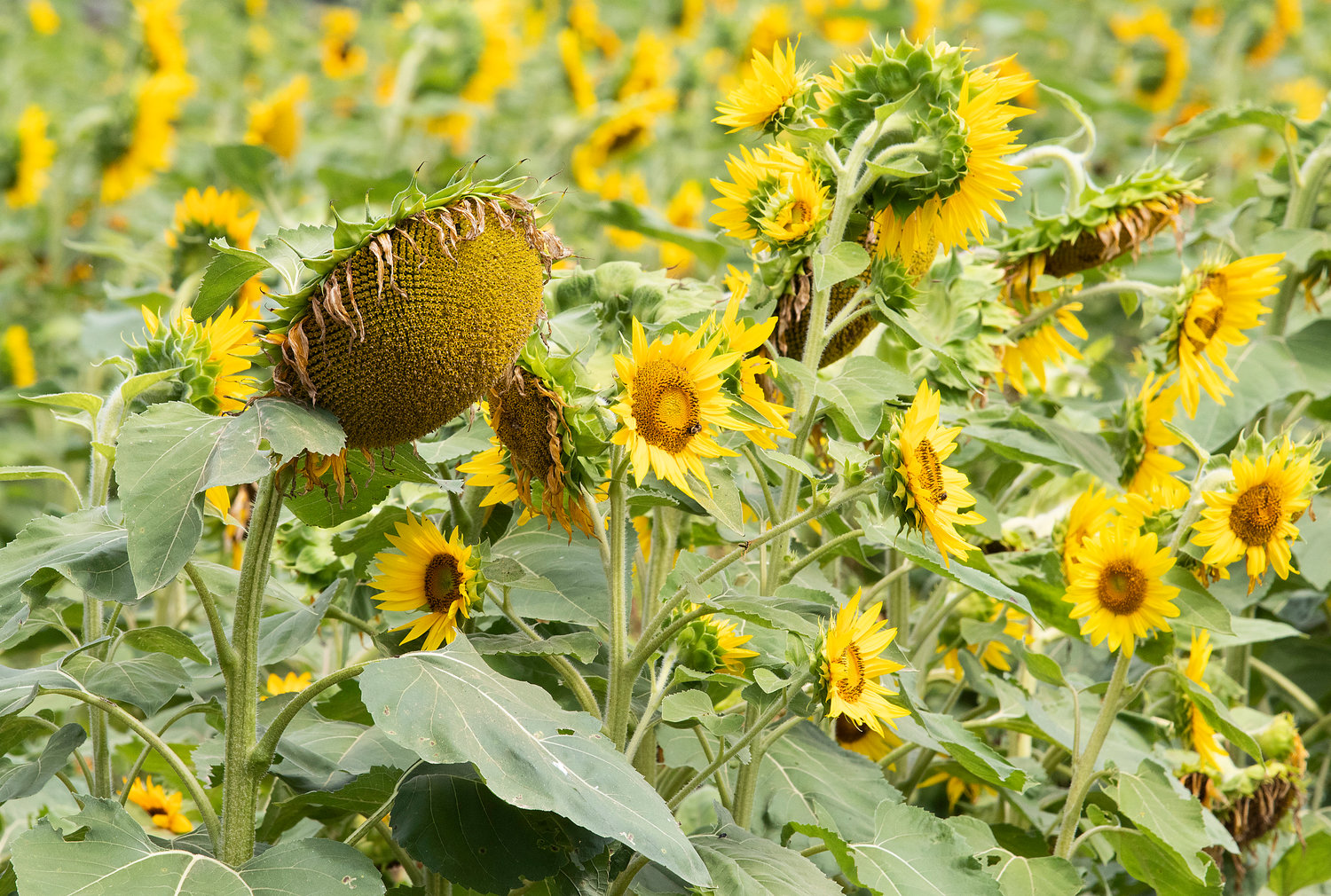 Sunflowers droop in the moist heat at Quonset View Farm.

Kitchen manager and head chef Robert Pires stirs the clam chowder as he begins to heat it up on Friday morning. He wears a durag soaked in cold water to keep himself cool while working shifts of up to 14 hours.
RICHARD W. DIONNE, JR. 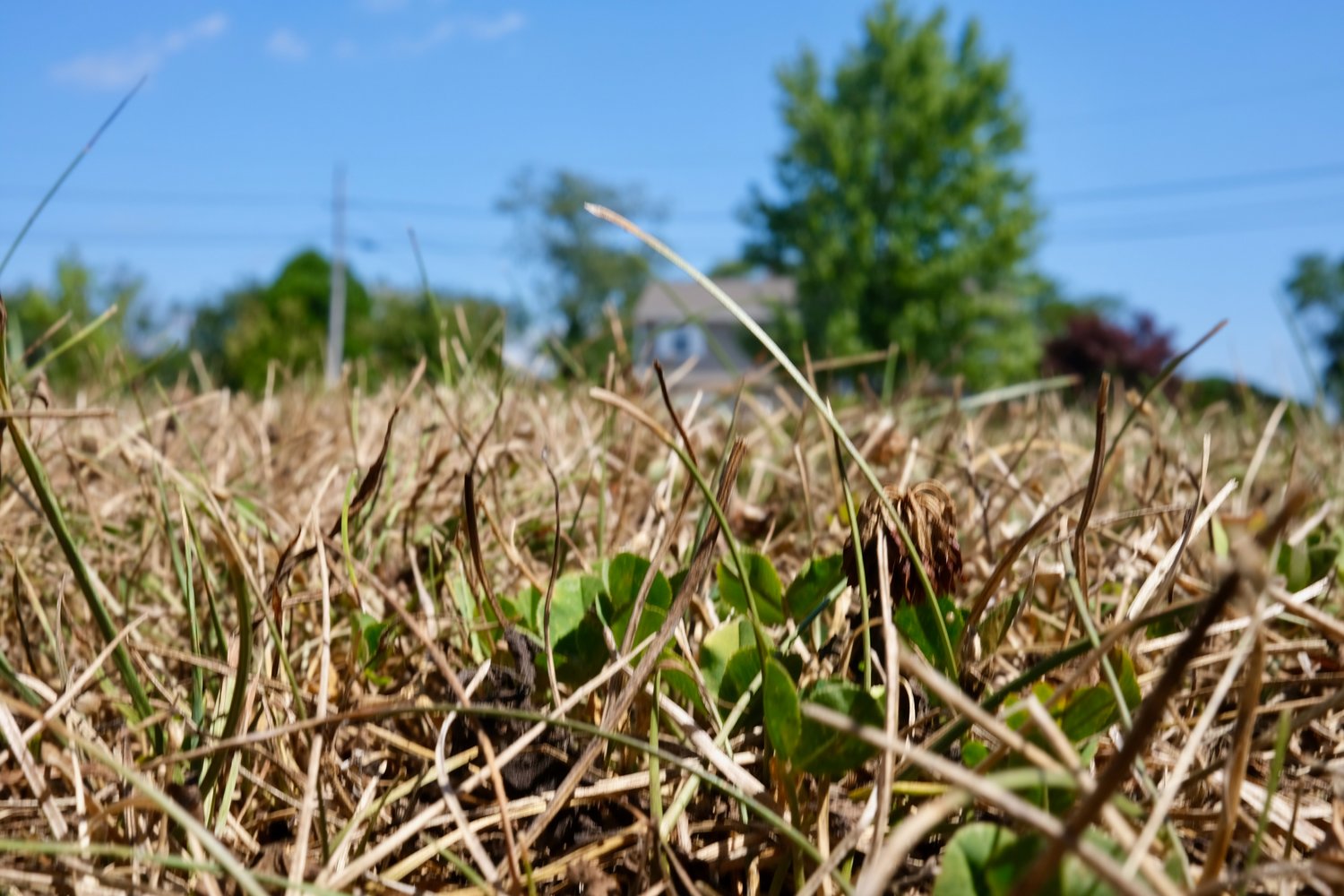 Many residents have let their lawns go brown during the drought, rather than water them.
Jim McGaw
Previous Next
Posted Tuesday, August 9, 2022 6:13 pm

These are the only days any rainfall was recorded in Portsmouth going back to July 11, according to the Community Collaborative Rain, Hail & Snow Network (www.cocorahs.org). Some measurements may apply to the previous day’s rainfall.

PORTSMOUTH — You may have been feeling a bit toasty over the past month, but it’s unlikely you experienced the heat and humidity quite like Robert Pires.

The 58-year-old chef and kitchen manager at Flo’s Drive-In on Park Avenue works 14-hour shifts while hunched over three bubbling fryolators inside a cramped shack with little ventilation. Add a heat wave with multiple days surging well into the 90s — with no rain to offer a brief cool-down — and you’ve got a very unenviable job for most people.

Don’t tell that to Pires, however.

“I still enjoy doing this,” he said as he carefully watched over an order of fish cooking in 375-degree oil on Friday. “Just drink plenty of water, ice coffee, plenty of fluids. And, it’s the motivation. Once you start working, you want to put out a good product and that’s what we do.”

Portsmouth has seen about a third of an inch of rain — total — since July 11. In July, the National Weather Service reported that only .43 inches of rain fell in Rhode Island compared to the average of 2.5 inches. At the same time, the heat and humidity are prompting residents to crank their air conditioners, flee to local beaches or curtail their normal activities.

Rain finally started falling on Tuesday night (Aug. 9) and more is forecast for later this week, but it remains to be seen how much a difference it will make as lawns go brown and reservoirs get dryer.

Still, as of Tuesday the Portsmouth Water and Fire District has not issued any type of water-use restrictions, such as an odd/even outdoor water ban.

Jessica Lynch, the District’s general manager and chief engineer, was unavailable for comment this week as she was on vacation. However Philip Driscoll, chairman of the District’s Administrative Board, said he’s unaware of any restrictions at this time.

“I can tell you with some authority that the consumption has not, historically speaking, been abnormal,” Driscoll said. “It’s hot as hell, but we haven’t heard any talk yet about odd/even to reduce usage.”

Over at Quonset View Farm on Middle Road, Mike Flynn was riding a tractor on Friday, cultivating between rows of the strawberry field and rotating the soil to get the field ready for next year. He said the farm, which also grows pumpkins, potatoes, butternut squash and sunflowers, has been experiencing “severe drought conditions.”

Farmers in Westport and Little Compton are saying the same thing.

“It’s been a tough one,” said Ray Raposa, who runs Hay Ray's Farm and Feed in “Westport. “Two years ago was probably drier than this year, but it’s definitely been a dry one. We haven’t had hardly a drop of rain, and very few places have irrigation; maybe some, but it’s a very small percentage.”

The results have come in the form of smaller and fewer crops nearly across the board.

“Somebody said it’s the third driest summer on record,” said Andrew Orr, who runs Orr’s farm stand, also in Westport. “Some things are starting to fade away."

One of the most popular farms along the Farm Coast is Young Family Farm in Little Compton, which regularly sells thousands of peaches each summer, along with many other crops. This year, the peach harvest has been lower than normal, but an employee said this past week that they're getting by.

As Raposa said, “Farming is up and down every year anyway. That's just the way it goes.”

Not all farmers are complaining, however. The sunshine has been wonderful for the grapes at Greenvale Vineyards in Portsmouth.

“They love the sun, and their roots go down 30 to 40 feet,” said Nancy Parker Wilson, the vineyard’s general manager. “So far, in the last 40 years that we’ve been doing this, the dry conditions have been good for us. I know it stinks for a lot of other operations, but we’re in good shape.”

The winery is working with 27,000 vines, and each one is like a little person, she said. “You are training the vines so that when they produce the fruit, they don’t overproduce. So you want it to come in a two to three tones per acres, or five to six tons per acre depending on if it’s a vinifera or a hybrid, respectively. When you’re in a situation like this, the plant doesn’t put the energy into the canopy, the leaves; it puts its energy into the fruit. You get fantastic fruit flavor,” Wilson said.

The vineyard does not even water. “We did set up an irrigation system when the town asked us to put a water pipe through our property,” she said. “That was in ’98, and ’97, ’98, and ’99 were three consecutive years of super-drought. I finally saw some impact when the middle block of the Chardonnay grew to about half its height. Again, it was putting all its energy into the fruit, which was delicious. Of course, by the middle of October of ’99, it started to rain and it rained almost every day to 2000.”

The excessive heat has slightly diminished the size of the crowds that flock to the vineyard for tastings, live music and special events, however.

“They’re going to the beach,” she said. “Also, from a whole COVID thing, we had super attendance because they could be outside and we have a lot of space and have their distance. That was 2020 and 2021 when people we still a little bit shy about going inside. Now things have settled down a little bit. We had these super years in terms of visitation, but I think we’re back to normal.”

Back at Flo’s in Island Park, Robert Pires was hustling to keep up with the demand. “It’s constantly dropping those cakes and feeding that fryolator. We’re keeping up with the girls at the windows,” he said.

It can reach 110 degrees inside the shack on a hot day, with three fryolators going. Pires can take a few steps back to reach a window and hope for a breeze, but otherwise a durag soaked in cold water is his only other relief. He’d also like to see a little rain. “The tree in my yard is already dropping leaves,” said Pires, who lives in Common Fence Point. “When you see all the flowers in a yard, you know it’s my yard. We water our plants and garden, but not the grass.”

But he doesn’t complain about the job, ever.

“You get used to it,” he said. “You don’t get a break here. We just have to keep on working through it.”

With additional reporting by Ted Hayes and Rich Dionne.