Some school committee members were not aware of the agreement allowing Bristol school resources officers to use the cameras in schools until very recently. 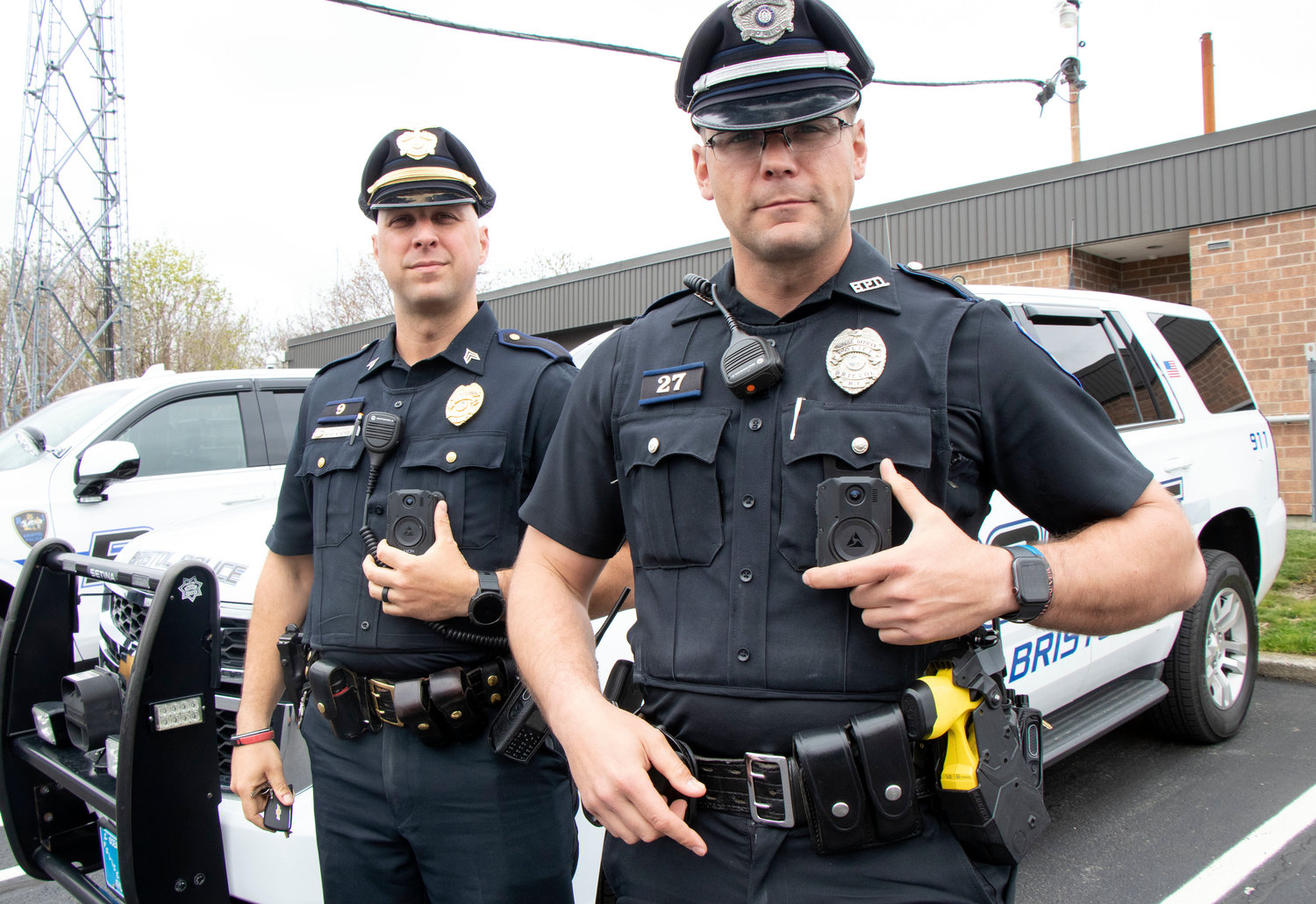 The Bristol Warren Regional School District has given police officers permission to use body-worn cameras inside of schools, under certain circumstances. Interpretation of those circumstances varies, and it ultimately comes down to the discretion of the officer when performing his duties.

Questions about the use of cameras in schools have become relevant recently for two reasons. First, nearly every police department in Rhode Island has accepted a grant as part of a $16.5 million program to outfit all officers with body-worn cameras. The cameras are intended to provide accountability and transparency around police actions.

Secondly, a consortium of nine different agencies, including the American Civil Liberties Union (ACLU), Kids Count Rhode Island and the Rhode Island Center for Justice, object to use of the cameras in schools and recently urged every school administration in the state to not allow the body-worn cameras in their schools. The Bristol Warren school administration signed an agreement with the Bristol Police Department earlier this year, long before their objections.

Some school committee members were not aware of the agreement allowing Bristol school resources officers to use the cameras in schools until very recently, and there are mixed reactions to the news. Nicky Piper of Warren said she learned about the cameras from the superintendent within the last two weeks. Piper thinks she has a good understanding of the policy, and if her interpretation is correct, she supports the administration’s decision to allow the cameras.

“My understanding is that the body-worn cameras are not turned on, unless they are authorized to do so by the superintendent or building principal, during an emergency situation — if there is a school shooting, or some other type of emergency,” Piper said. “They will not be turned on, in the school building, during a normal school day.”

The School Resource Officers Memorandum of Understanding (MOU) between the school department and Bristol Police Department, which was partially redacted and released to the Bristol Phoenix on Monday, states something different. In the section regarding use of the cameras, it reads that the school resource officers must wear the cameras while on duty, and must use them in accordance with the standards set forth by the police department. Those standards require use of the cameras during “calls for service.”

Piper does not believe a body-worn camera policy should have come before the school committee for review or approval. She supports the school administration’s decision to sign the agreement in the interests of school safety.

“I’m personally comfortable with it, as long as those cameras are not turned on during the normal course of the day,” she said.

Fellow school committee member Tara Thibaudeau, also of Warren, had a different reaction. Thibaudeau knew nothing about the cameras until contacted by the Bristol Phoenix. “I would have preferred to find out about this via my administration, versus the local newspaper,” she said.

After learning more about the program, she said, “I believe it’s something that should have been discussed, or at the very least brought to us. It sounds like it’s a policy, and a policy should always go before the school committee,” Thibaudeau said.

The groups warning about the use of cameras by school resource officers sent a letter to every Rhode Island superintendent two weeks ago. Their concerns include student privacy, the potential for live cameras to change how SROs interact with students, and the potential for minor school infractions to escalate into criminal justice proceedings because there is recorded video evidence.

The letter states: “We are concerned that the recording of innocuous or minor incidents could turn them into criminal justice matters … Our organizations have seen how very small issues which should be solved internally, like a student wearing a hat in violation of the school dress code, may be inappropriately redefined or escalated into a criminal matter when a police officer is involved … We believe that any purported benefits from having recordings of SRO (school resource officer) interaction with students is far outweighed by the negative impact of this technology in the school setting.”

The groups’ letter prompted the Bristol Phoenix to inquire how Bristol Warren and neighboring school districts were planning to address the body-camera situation. Most districts indicated they are still studying the issue, consulting with their legal counsel, and are likely to bring their decision before their school committees. Only Bristol Warren indicated it had already made the decision and has a policy in place with Bristol Police.

When are the cameras turned on?

Superintendent of Schools Ana Riley initially did not respond to attempts to contact her, but she sent a written statement after a story published last week (“Should police wear cameras in schools,” Nov. 17). The joint statement by her and Bristol Police Chief Kevin Lynch explains the program and the collaboration between the two organizations.

Regarding the actual use of the cameras, it reads, in part, “We understand these cameras may be a cause for concern for some, but in the specific case of our SROs, these cameras are not turned on and recording during the regular course of the school day. There are policies in place that outline how and when these cameras shall be used, and in the case of SROs, they are only to be turned on when they are called into police service and during emergency situations as deemed appropriate by the officer. While we hope such an incident never takes place in our schools, it is assuring to know the cameras can be accessed should such a situation arise.”

As described in their joint statement, the cameras are to be turned on when officers are “called into police service.” That description agrees with the overall body-worn camera policy adopted by every police department in the state, which sets guidelines for everyday interactions between officers and the public. The default setting is to have the cameras rolling when officers are investigating or responding to almost every incident.

Despite how the official policy reads — that the cameras are live during “calls for service” — both Chief of Police Kevin Lynch and Superintendent Riley said the cameras should not be in use during the normal course of the school day.

Bristol has two school resource officers, one assigned to Mt. Hope High School, and the other assigned to the town’s three elementary schools. They are police officers first, employed by the Bristol Police Department. The MOU with the school district makes it clear that the officers “are not the school disciplinarians” and “shall refrain completely from functioning as one.” It states: “The School Resource Officer is not to be involved in the enforcement of disciplinary infractions that do not constitute violations of the law.”

This language would seem to negate one of the concerns from the nine opposition groups, namely that SRO camera footage will be used to support school disciplinary matters.

As for when they will be used, that remains a judgement call for the officers on duty. While working within the schools, they will have to decide whether to use them only during “emergency situations,” during “calls for service,” or something in between. For the “in between” stuff, they will have to decide whether each interaction with a student is something innocuous, something involving school discipline, or something potentially criminal in nature. Per the MOU, they can decide to turn them off if “there are situations of a sensitive nature.” There is no further description of what would constitute a “sensitive” situation.