That is all that separated the vote to spend $3.5 million to purchase the former Carmelite Monastery property on Watson Avenue.

At the financial town meeting on Wednesday night, 176 … 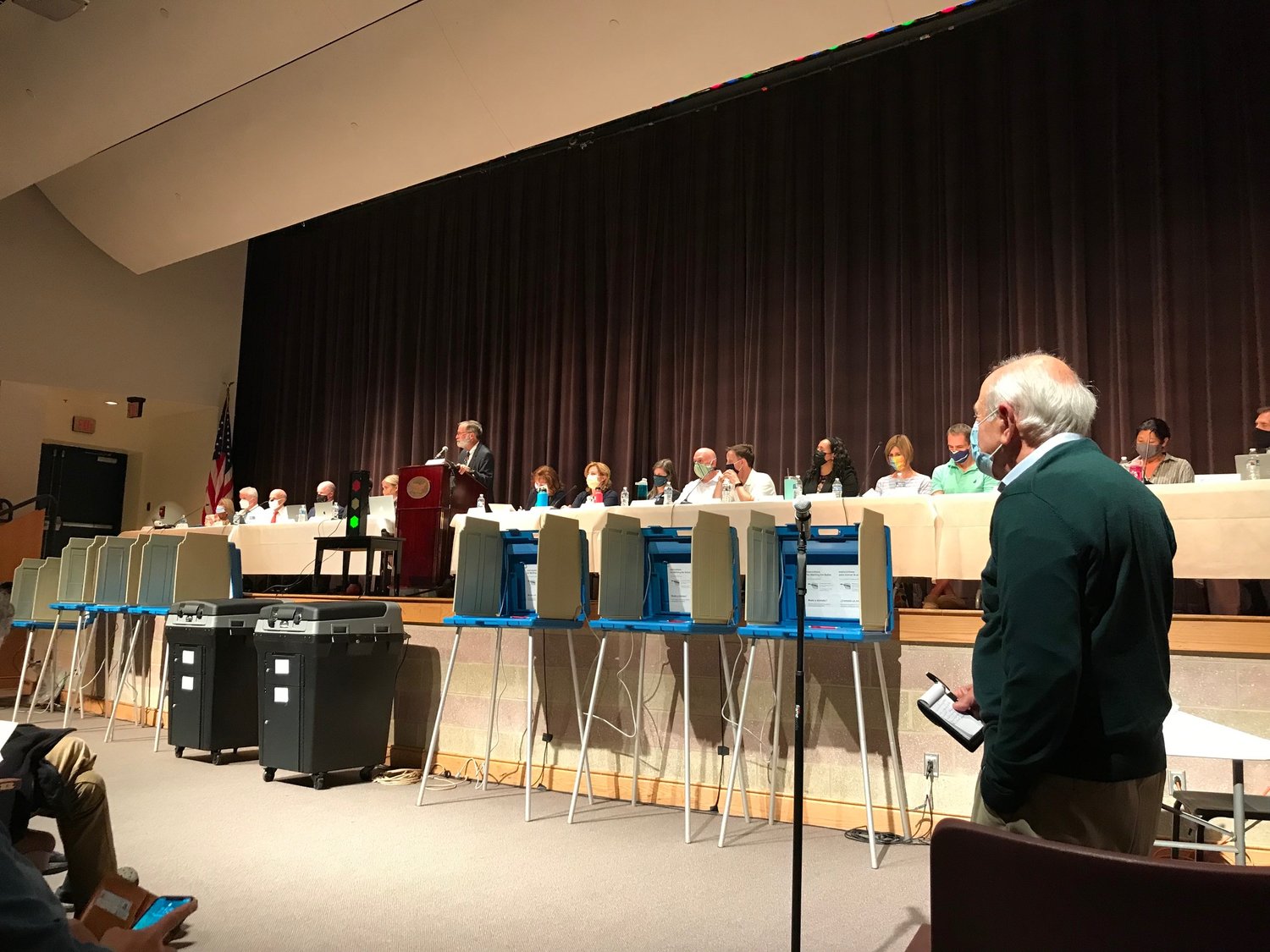 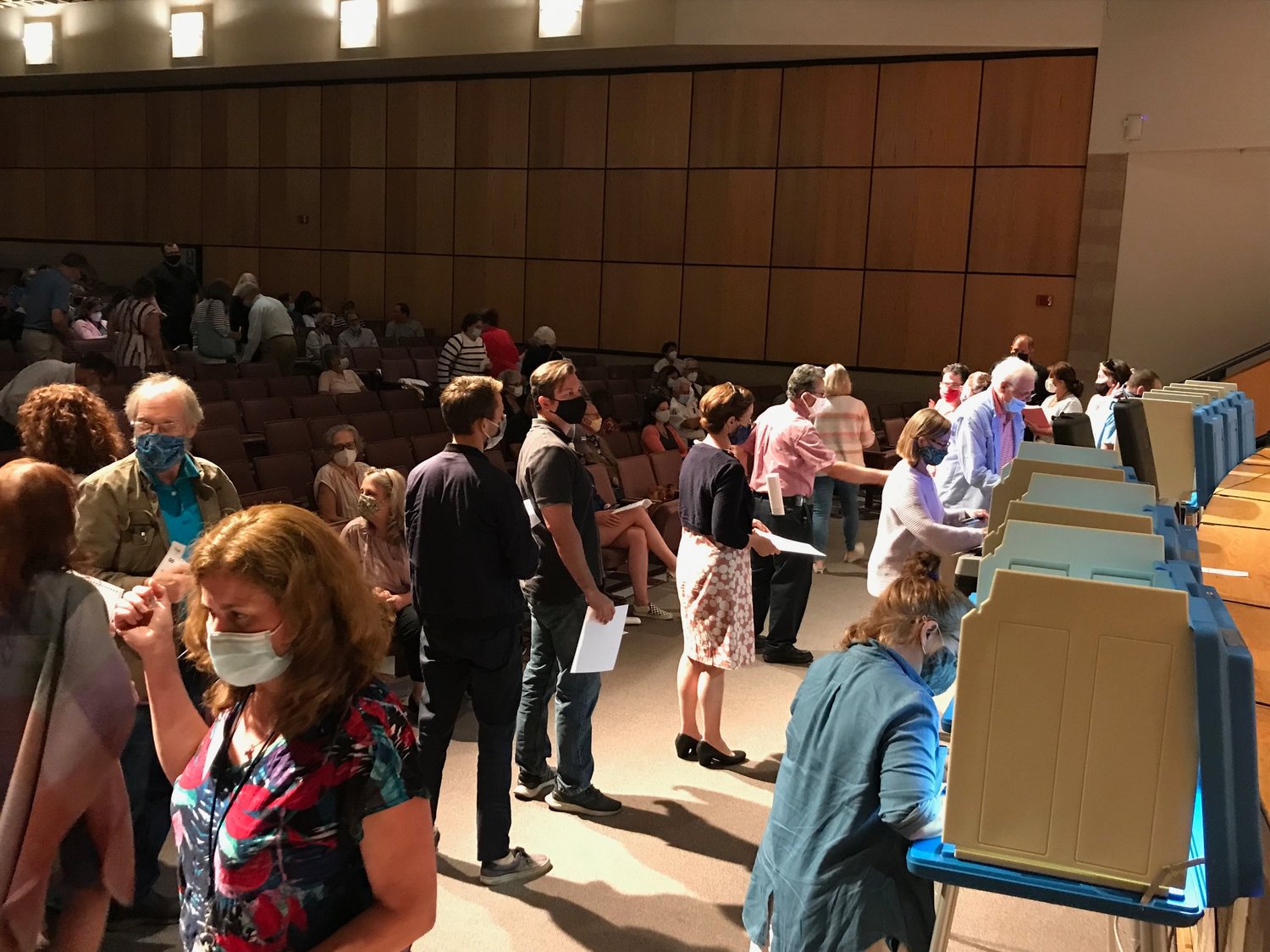 Residents line up to cast their ballots in the $3.5 million vote on Wednesday night at the Barrington financial town meeting. The resolution passed by one vote: 176-175.
Previous Next
Posted Thursday, June 17, 2021 12:47 pm
By Josh Bickford

That is all that separated the vote to spend $3.5 million to purchase the former Carmelite Monastery property on Watson Avenue.

At the financial town meeting on Wednesday night, 176 residents voted to have the town buy the seven-acre property that overlooks Narragansett Bay, while 175 residents voted against the motion.

Those in favor of the purchase, including Barrington Town Council President Michael Carroll, said the old monastery could provide much-needed senior housing in Barrington, and/or affordable housing.

Those against the purchase said the town was rushing into the deal, had no really plan for the property, had not completed a financial impact analysis, and had failed to give taxpayers enough advance notice.

Many residents who spoke out during the FTM said they only learned about the $3.5 million resolution within the last few days.

Elizabeth Grieser, who lives on Watson Avenue, said she was disappointed in the town’s failure to disseminate information about the $3.5 million bid; local officials submitted a bid on May 27 to the property’s owner, the Diocese of Providence.

Ms. Grieser said this seemed like an 11th hour deal, adding: “There is no actual plan being presented tonight.”

Mr. Carroll said the council held an executive session (private) meeting about three weeks earlier where members voted to submit a bid for the property.

The council president also said town officials learned just hours before the FTM that the diocese had tentatively accepted the town’s bid of $3.5 million.

Mr. Carroll said information about the potential property purchase was limited because it could have compromised the town’s negotiations. He also said the deal was done quickly as the town only learned about the listing recently.

Bill DeWitt, a member of the town’s Committee on Appropriations, asked if the town was going to preserve or develop the property, as that was not clear in the language of the resolution. He also said that town council members failed to follow the proper process, which may impact the public’s trust in the council.

Mr. DeWitt then offered this advice to members of the council: “If you want to keep seniors in town, stop raising their taxes.”

Mr. Carroll responded, stating that the council did not know about the property’s availability until recently. He later said there were others bidding on the property, and that if the town did not own the property it would only have limited control over what happens with it.

Barrington resident Bev Migliore said the property had been listed for sale since early spring. She added that the town will likely be required to spend much more than $3.5 million on the property.

Some residents, including Stephen Venuti, said they were in favor of buying the property and wanted to applaud the council for moving quickly on the deal. Mary Talbot said there is a need for more affordable housing in Barrington, and senior housing. Pam Lauria said there was no senior housing in Barrington. A Barrington resident in the audience then shouted out “Barrington Cove,” referring to the senior affordable housing apartments on Bay Spring Avenue.

Julia Califano, the former town moderator, said Barrington does have senior housing, and it does have affordable housing. She also cautioned that developing the monastery property will be too expensive for the town to pursue.

First-year town moderator Richard Staples eventually asked for a vote on the $3.5 million resolution, but a voice vote was deemed too close to call.

He then asked for a standing vote, which resulted in 150 people in favor of the purchase, and 148 opposed.

The paper ballot vote, initially stalled by a voting machine malfunction, resulted in a final tally of 176 for the purchase and 175 against. The paper ballots were hand-counted and the machine later confirmed that total.

Just a few minutes after the vote was closed, one last resident walked to the front of the high school auditorium to cast his ballot. He was sent away unable to do so.

Barrington resident and former town council member Ann Strong and others questioned the voting results and motioned for a recount, but Mr. Staples said the hand count and machine tally served as an initial count and recount.

Ms. Strong also challenged the increasing number of voters — a jump of more than 50 voters from the standing count to the secret paper ballot.

Barrington Town Solicitor Michael Ursillo said it was fine for people to show up and vote throughout the meeting as long as the specific vote had not yet been closed.