PORTSMOUTH — Despite a Town Council recommendation to discontinue a portable LNG facility on Old Mill Lane as soon as possible, impose a moratorium on new gas hookups and act to reduce … 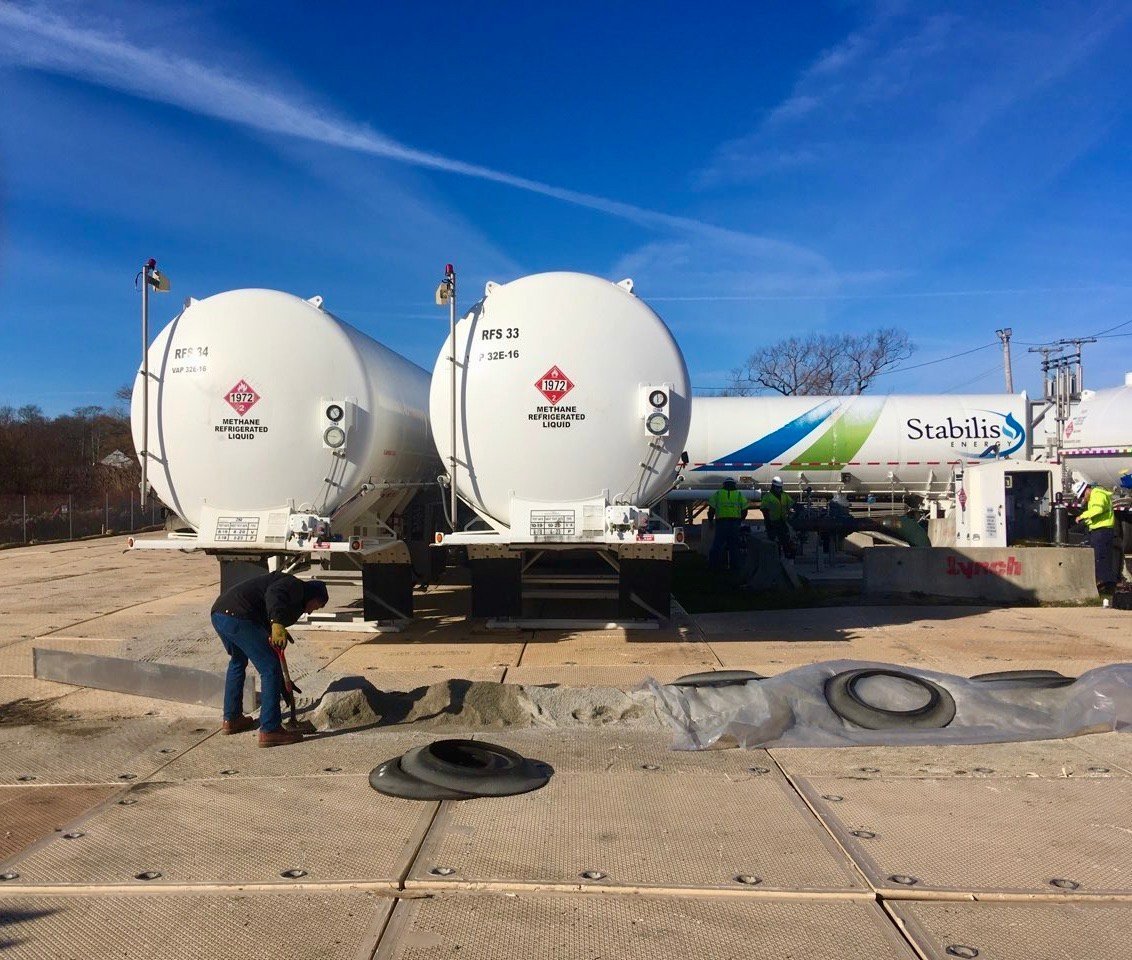 File photo of tanker trucks filled with liquefied natural gas at a temporary storage facility on Old Mill Lane, within a residential neighborhood. National Grid said it was planning to demobilize the seasonal facility on April 1. It may remain, however, for up to 10 more winters, according to the company.
COURTESY OF PETER HORVATH
Posted Thursday, March 25, 2021 3:48 pm

There are a lot of moving parts and it requires a lot of collaboration. Nothing has been finalized.”
Brian Schuster, National Grid
By Jim McGaw

The council voted unanimously in November 2020 to send a letter to National Grid outlining its recommendations, which also include offering incentives for customers to incorporate energy-efficient systems such as heat pumps.

But since that meeting, said Council Vice President Linda Ujifusa, the utility has submitted proposals to the R.I. Public Utilities Commission (RIPUC) that appear to reject the council’s recommendations. Specifically:

• National Grid is requesting approval of $4.9 million from ratepayers to study options to expand natural gas infrastructure on Aquidneck Island, including on Navy property. (The company has been in discussions with Navy officials regarding two sites: Tank Farm 3 in Portsmouth and the former Middletown transfer station, both on the island’s west side.)

• The company is proposing a “hybrid” to build a new energy facility, miles of new gas mains and hundreds of new building connections enabled by the new energy facility, and incremental investments in weatherization and electrification to offset the new gas growth, Ms. Ujifusa said.

She said she put the matter on the council’s agenda Monday because the decision-making process is difficult for the public to follow, “in part because it involves so many potential decision-making entities — local, state and federal (Navy) — and there is little notice to the public about potential opportunities for review and comment.”

Brian Schuster, director of customer community management for National Grid in Rhode Island, addressed some of the council’s concerns, but pointed out that the company’s plans remain fluid.

“There are a lot of moving parts and it requires a lot of collaboration,” he said. “Nothing has been finalized.”

The company considered a wide variety of solutions to address the gap between the gas capacity and demand on Aquidneck Island, but settled on four:

• An LNG facility at a new location, possibly Navy land or an offshore barge, which includes the potential for a hydrogen hub.

• An Algonquin Gas Transmission (AGT) pipeline project, which could range from system reinforcement to a regional project.

As for the last option, Mr. Schuster said National Grid plans on filing an application with the RIPUC’s Energy Facilities Siting Board (EFSB) near the end of April that will call for a longer longterm need for Old Mill Lane while alternative sites are being explored. Although he acknowledged that most public feedback suggests that residents want to see the Old Mill Lane facility shut down as soon as possible, National Grid’s position is that won’t be possible for several more years — possibly up to 10.

The backup facility on Old Mill Lane, which has drawn concerns over safety, noise and lighting, is operational during the four months of each year when the demand for gas is high — from Dec. 1 to March 31. “We are planning our demobilization of the site on April 1,” said Mr. Schuster, adding there was no need to use the facility for vaporization over the winter this year.

Although National Grid is not yet prepared to formally oppose a new site for LNG operations, the company has been in contact with Navy officials regarding property on the west side of the island.

If National Grid formally selected one of those sites, however, the commanding officer would need to approve it, and a hearing would be required to solicit public comment, Ms. Mueller said.

Included on Monday’s agenda was a list of questions by residents of the Overlook Point, abutters of the tank farm property who are concerned about an LGN facility’s impact on that neighborhood.

Mr. Schuster, however, said the abutters at Old Mill Lane are “right across the street,” while those living near the Navy property are hundreds of feet away, with many natural buffers between them and the tank farm.

“We’re not looking to put this in somebody’s backyard,” he said. National Grid “has looked at every potential site across Aquidneck Island” and the Navy property was determined to provide the best possible alternative site, he said.

Hank Webster, the Rhode Island director of Acadia Center, a nonprofit data and policy research organization that supports energy efficiency programs, reiterated comments he’s made previously about the need for National Grid to impose a moratorium on new hookups and invest in a mix of weatherization, air source heat pumps, and heat pump water heaters for existing gas customers. That would be a far cheaper solution than to expand infrastructure, he said.

Maine is planning on installing 100,000 heat pumps within the next five years, Mr. Webster said, and there’s no reason why National Grid couldn’t do the same here.

He added that the proposal to blend small amounts of hydrogen into the system would be problematic — and expensive — since the current infrastructure is not set up to handle that type of gas.

While National Grid “will not oppose a moratorium per se,” the company won’t advocate for one either, Mr. Schuster said. National Grid believes in giving customers choices, and natural gas is affordable, he said.

In any event, Ms. Ujifusa said it’s frustrating for many residents who want to be notified of any upcoming meetings or developments regarding National Grid’s plans, which often change.

“How would we have known, for example, without a casual conversation with Mr. Webster, that you guys were looking for $4.9 million to study infrastructure options on the Navy base?” she asked.

Mr. Schuster said National Grid has tried to be as transparent as possible. The company’s meetings with the EFSB have all been properly advertised, and there are opportunities for public comment. He also urged residents to visit National Grid’s website to learn more.

He conceded, however, that the company could do a better job at reaching out to interested parties.

“I know everyone is trying to do the right thing,” Ms. Ujifusa said in her closing comments. “It is a complicated issue. The public is very interested and concerned about what’s going on.”