PORTSMOUTH — By next year, residents may be enjoying a public waterfront park at the site of the former ferry landing thanks to a land acquisition closed Monday by the Town of Portsmouth and the Aquidneck Land Trust (ALT). 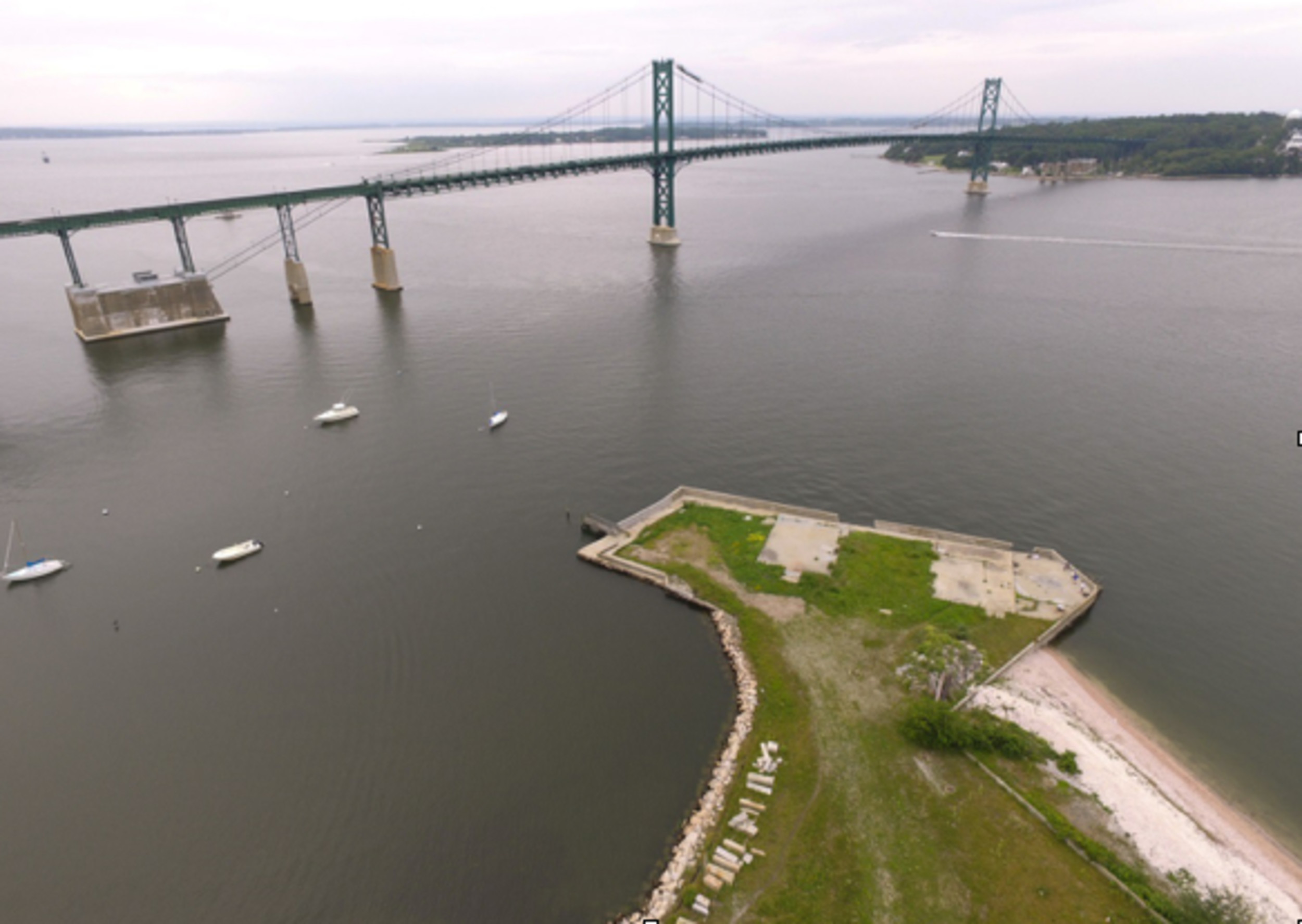 PORTSMOUTH — By next year, residents may be enjoying a public waterfront park at the site of the former ferry landing thanks to a land acquisition closed Monday by the Town of Portsmouth and the Aquidneck Land Trust (ALT).

“A piece of Portsmouth history has been preserved for all to enjoy,” said Town Council President Keith Hamilton.

The deal involves just under 5 acres of property at the intersection of Bristol Ferry Road and Bayview Avenue that juts out into Mt. Hope Bay and features scenic views of the bridge and surrounding water. Most of the property is underwater, as the land was formerly the site of an old ferry terminal; the dry land is about 1.5 acres in area.

The site has a rich history dating back to the 1600s when it served as the ferry landing between Portsmouth and Bristol up until the construction of the Mt. Hope Bridge in 1929. A nearby sign marks the spot of the Bristol Ferry Town Common.

More recently, the property was the location of the former Mt. Hope Marina House, a popular restaurant that was destroyed by a fire set by arsonists in December 1985. The restaurant had been out of operation the previous four years due to an FBI investigation into allegations it was a drop-off spot for drug smugglers.

The town and ALT closed on the property Monday for $900,000. Mr. Hamilton said $600,000 came from Portsmouth and that the funds were allocated in the budget last year for bonding. The remaining $300,000 came from ALT.

According to a prepared statement from ALT, the property was purchased “from a number of limited liability companies with members from Bristol.” After Monday’s council meeting, Mt. Hamilton said the primary property owner was Joseph Brito of Bristol.

Mr. Hamilton said the town and ALT were involved in negotiations for the property for approximately one year. Under the arrangement, the town will hold ownership and ALT the conservation easement, which will permanently protect the property as open space and parklands.

The property includes a small building with cistern. “Part of the building is underground,” Mr. Hamilton said.

Will be cleaned up, secured

The town doesn’t have big plans to renovate the property other than cleaning it up, repairing its seawall and plopping down a couple of park benches, said Mr. Hamilton. Fire Chief Michael Cranson has expressed interest in a floating dock at the site, the council president said, and the property could make an ideal spot for a sailing center in the future.

For now, however, the first thing that needs to be done is to secure the property, he said. The chainlink fence at the foot of Bristol Ferry Road that prevents the public from accessing the land will remain for now.

The timetable on the park’s opening will depend on the availability of grant money the town hopes to acquire, said Mr. Hamilton, adding that “a couple of organizations” have already expressed interest.

According to ALT, “A park planning process with community involvement funded through a private foundation grant will occur in the next year to determine the best design and recreational use for the future park.”

Under ALT’s timeline, the park should be ready to open by the summer of 2017.

“Portsmouth is lacking in waterfront public access open space,” said Chuck Allot, ALT’s executive director. “The land trust is thrilled to work with the town to bring a waterfront park to Portsmouth with such high scenic and recreational conservation values. I’m excited to see the Mt. Hope site transform into a gem along the Portsmouth coast.”

Added Mr. Hamilton, “The Mt. Hope Marina property is an important part of Portsmouth’s history. It is a location where many of our town’s early settlers came ashore. It will be a beautiful waterfront park for all of Portsmouth to be able to enjoy forever.”