The exhibit is being made possible by a grant made by the Friends of the Rogers Free Library to the Bristol Art Museum. 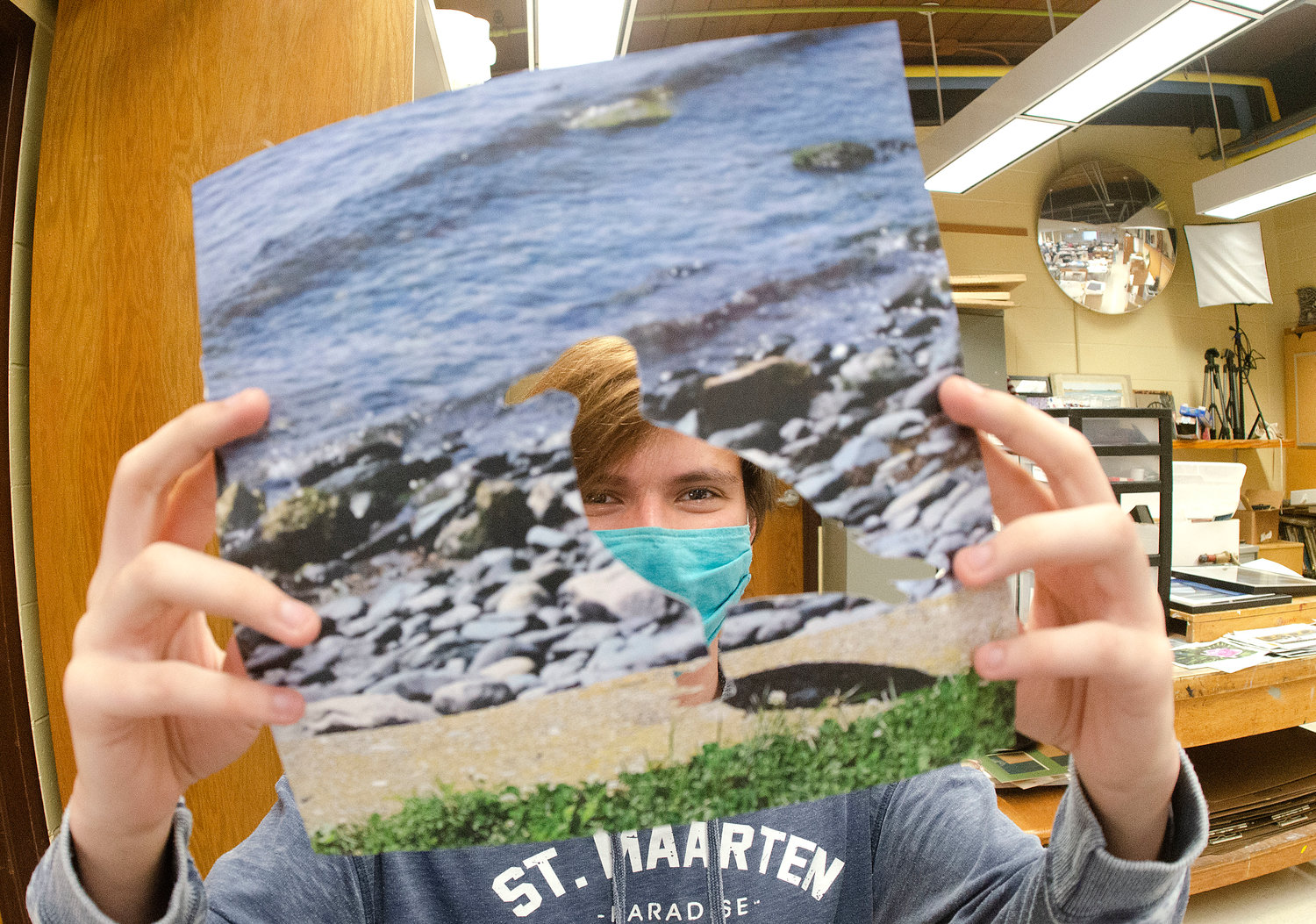 Brandon Nelson works on what he calls a mix of trash and photography for a photo collage during art class last week.
Richard W. Dionne Jr. 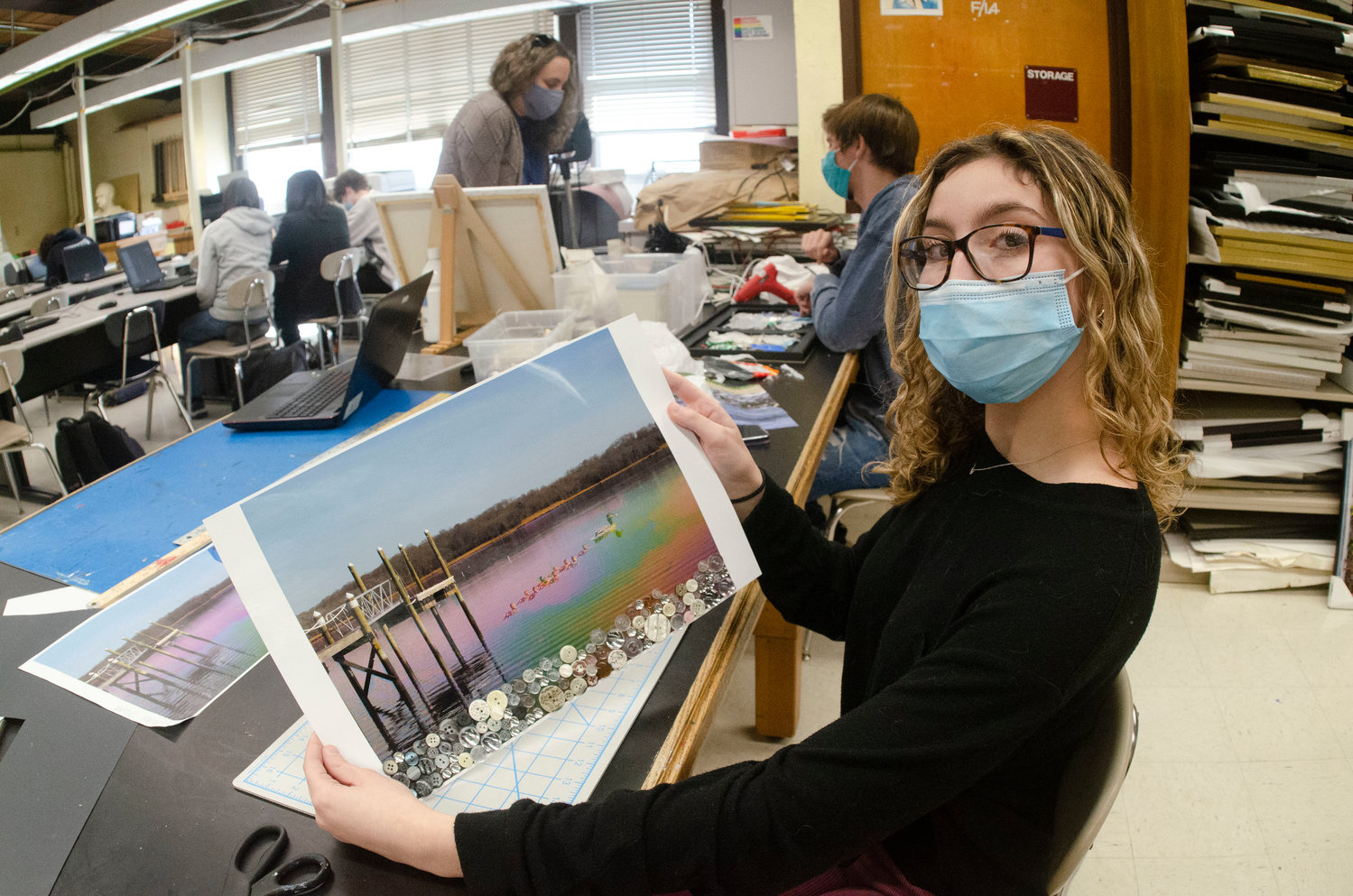 Senior Juliana Cassata displays her work, which incorporates an oil slick effect that she has photoshopped over an image of water and waterfowl.
Richard W. Dionne Jr. 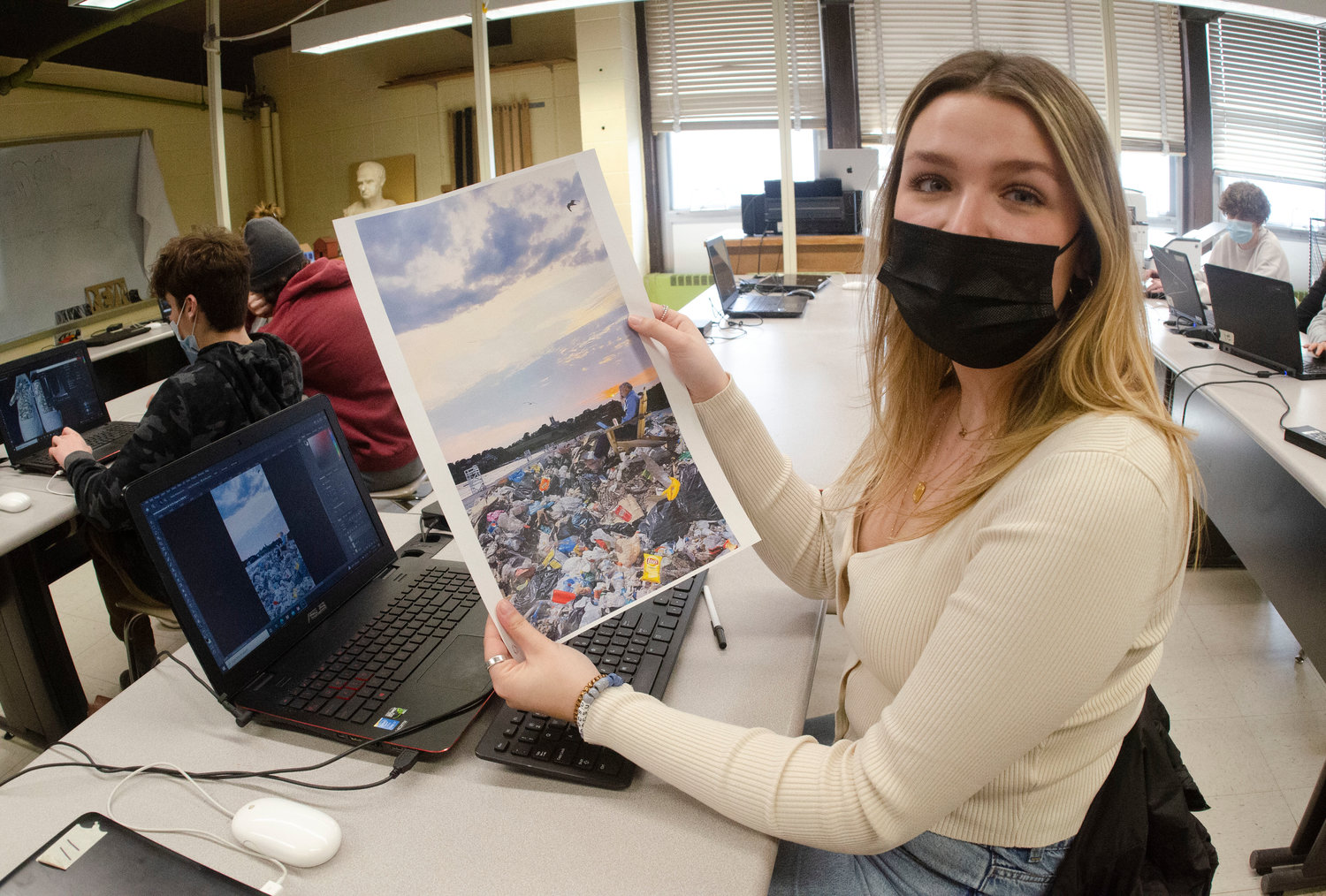 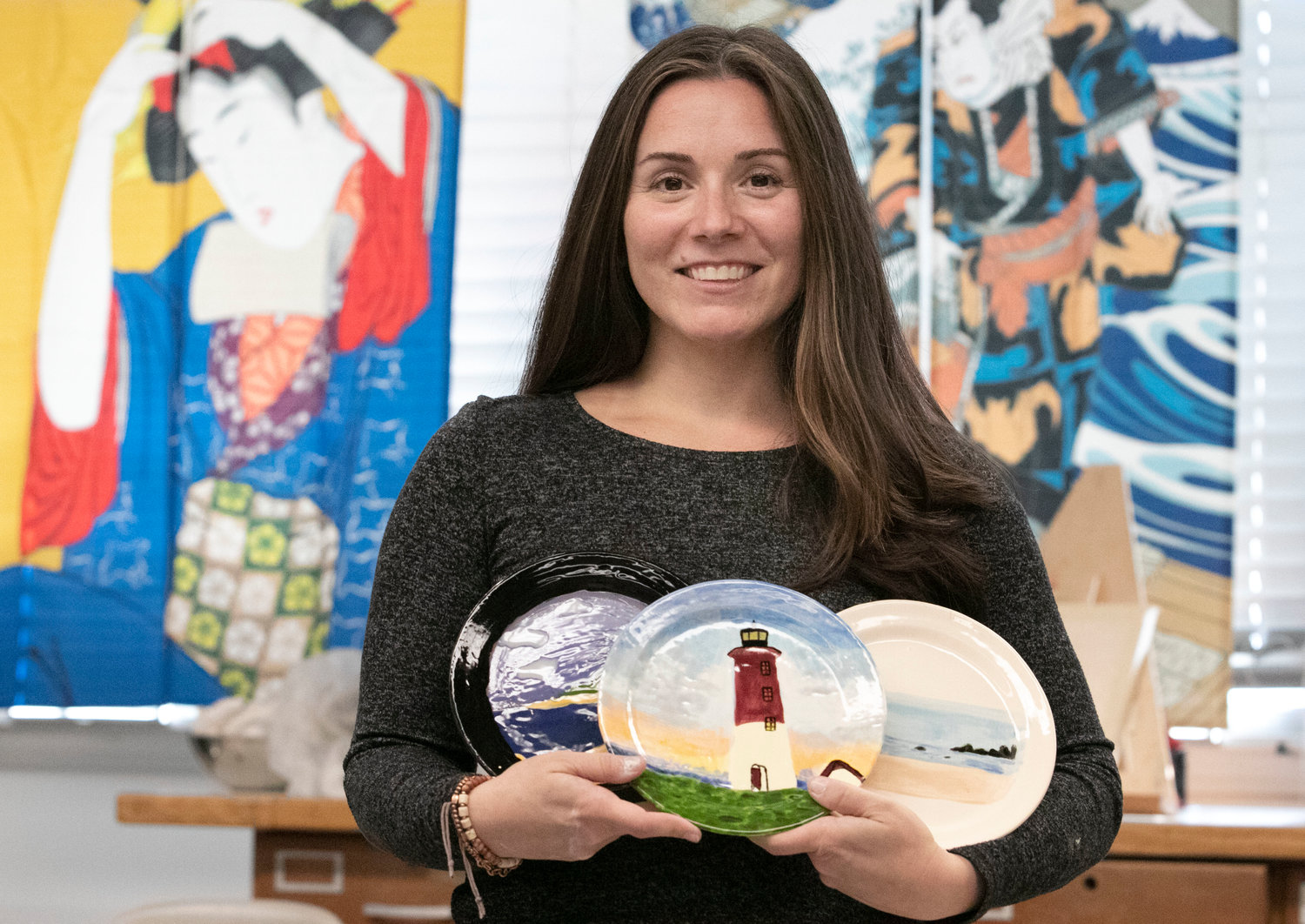 During a visit on a recent afternoon, the Mt. Hope High School art department — four large classrooms bursting with color and creativity — was a hive of activity as students prepared their works for their upcoming exhibit. Titled “Only One Earth - Only One Rhode Island: Our Environment Through Our Students' Eyes,” the exhibit will be comprised of students’ artistic expressions of environmental degradation and climate change’s threat to coastal communities and is scheduled to open in April.

The exhibit is being made possible by a grant made by the Friends of the Rogers Free Library to the Bristol Art Museum, and is engaging Bristol and Warren’s talented art students to create mixed-medium artwork examining pressing environmental challenges such as climate change and its past, present and pending impact on coastal communities.

“The grant went to the Art Museum and they have provided us with supplies and frames,” said art faculty member Lauren Enjeti. “We just let them know what we needed; they’ve been great.”

The exhibit has three specific goals: engage Mt Hope High School students in a discussion of the current state of the natural geography and natural resources of our coastal community; provide a forum to express students’ observations and concerns through artistic media; and showcase student artwork in a public venue offered in partnership with the Rogers Free Library.

Each MHHS art teacher has a different focus and each one is guiding their students through unique projects for the exhibit. “We each have our own specialty,” said Enjeti. “I do photography and graphic design, Paul Ricamo teaches painting, Eileen Locicero teaches ceramics and general art, and Kerri Sloat teaches ceramics and drawing.”

“We’ve been doing a lot of stuff here getting the kids thinking about this prompt and this show,” said Ricamo, whose students have created a series of colorful paintings of animals, many of which are already getting some exposure in the school’s display cases. “They’re pretty pumped about it.”

The teachers will be jurying the show, but the works that don’t get in will be shared digitally at the exhibit, which is expected to hang in the Library from April through May, in conjunction with Earth Day.
A lot of students have chosen to focus on issues like litter, endangered species, and coastal sea rise.

“There’s also some works appreciating what we have, and showing the beauty of our area. They don’t all show disaster,” said Enjeti.

Students hard at work on their projects this day include Aliana Fleming, a senior, who is using a transfer technique to incorporate trash into a print of the water that she took. Senior Juliana Cassata has created an oil slick effect that she has photoshopped over an image of water and waterfowl. A giant Dawn bottle makes a statement, while silver and pearl-colored button bubbles add dimension.

Senior Brandon Nelson is focusing on how trash is causing a loss of habitat for wildlife. He has taken pictures, cut out the animals, and is gluing trash under the cutouts to represent that trash is replacing animals.

“I wanted to take a picture, manipulate it, and add dimension to it,” he said.

One of the projects Kerri Sloat’s students are creating for the exhibit are line drawings on styrofoam cups, after the style of L.A.-based artist Cheeming Boey, that will be displayed with mirrors to show all sides. Eileen Locicero’s students have created ceramic tiles and plates depicting the local landscape.

Sophomore Leah Dietrich is utilizing a unique photo transfer technique, one that was actually initially shared with Enjeti by another student. Depicting the flooding that could impact the Silver Creek Bridge if sea level rise come to fruition.

“I soaked the paper in hand sanitizer and pressed this image of water on the print, and it created a ghost image,” said Dietrich. The addition of markers that show predicted levels of sea level rise and dates adds scientific veracity to the piece.

“Climate change is traditionally interpreted as a scientific matter, but this exhibit will provide a venue to showcase the artwork of young adults to express their observations and offer a different perspective to raise awareness and educate the community on an issue of widespread concern,“ said Museum Board Chair Andy Tyska. “The Bristol Art Museum thanks the Rogers Free Library for recognizing the value of this community exhibit and is grateful for their generous support.”