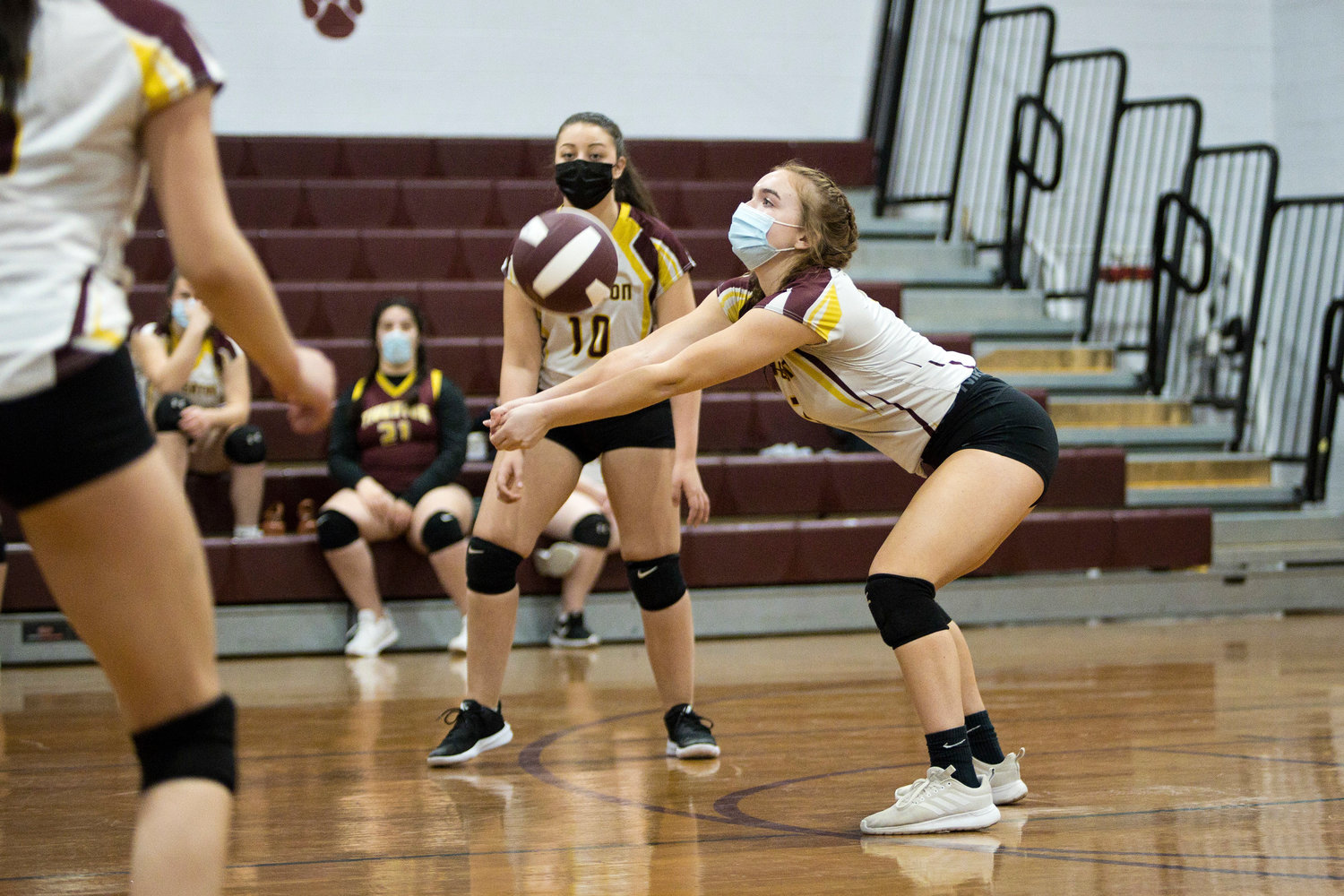 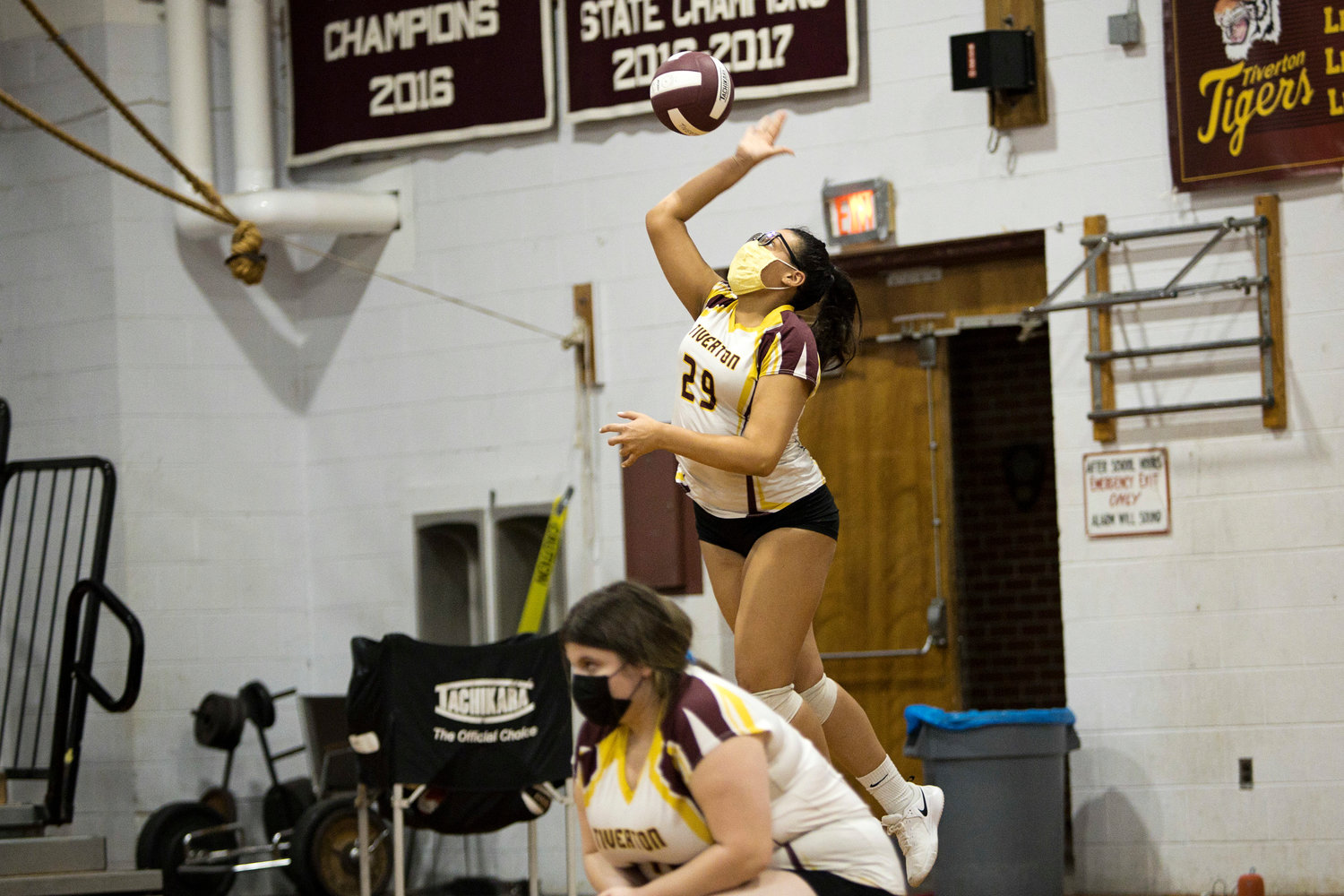 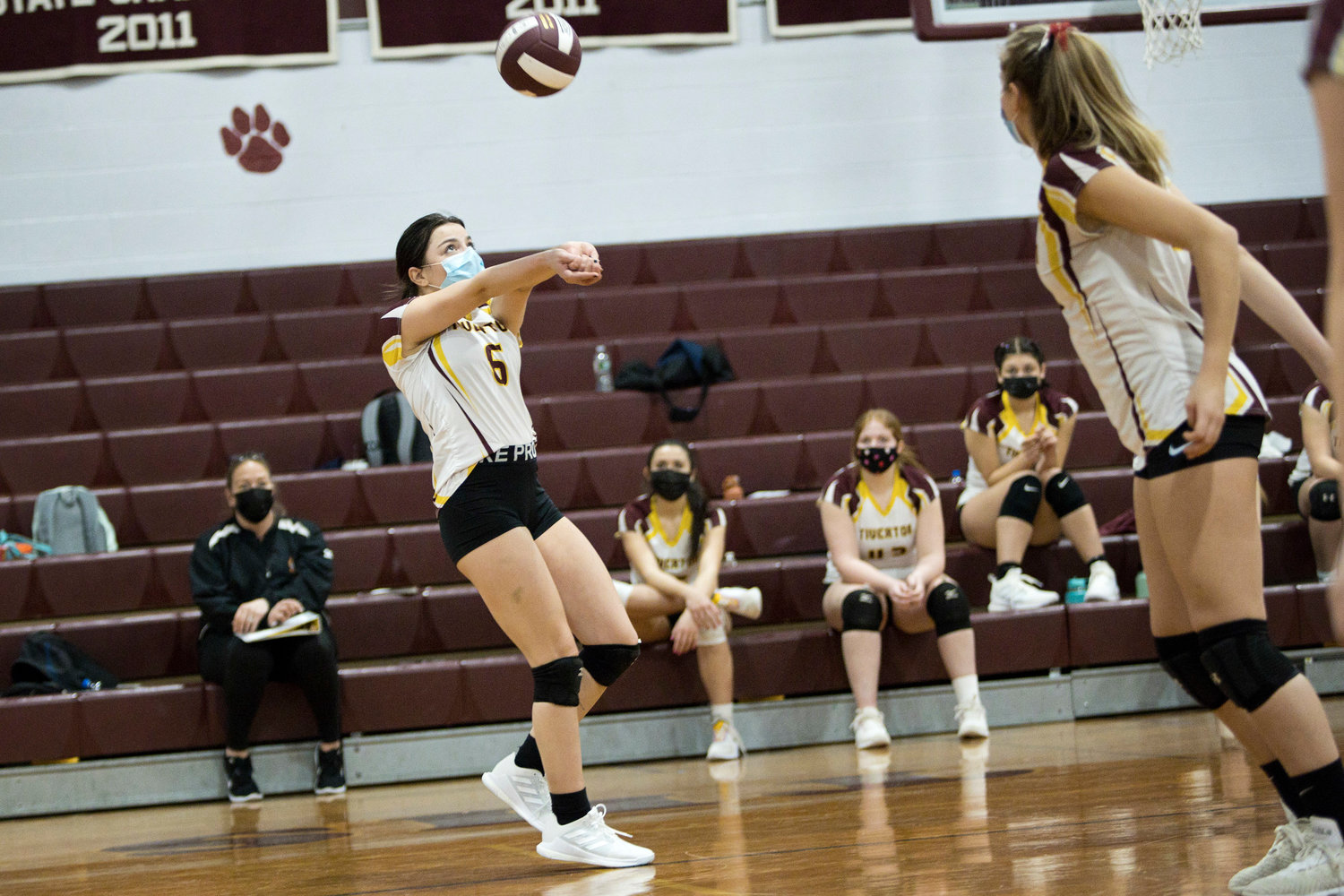 Gabby Piscani bumps the ball up for a teammate during Tuesday night's game against Paul Cuffee School.
Photo Julie Furtado 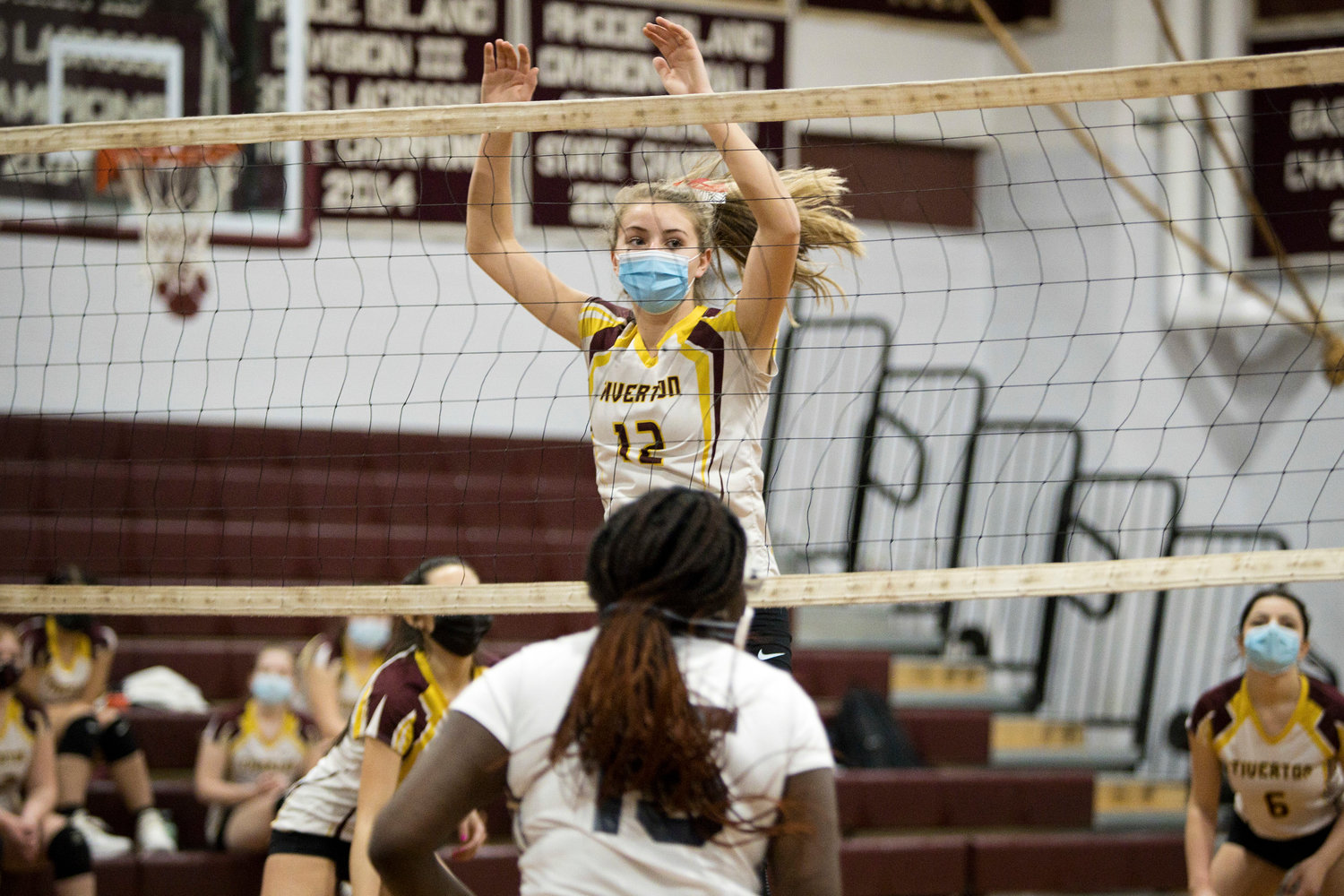 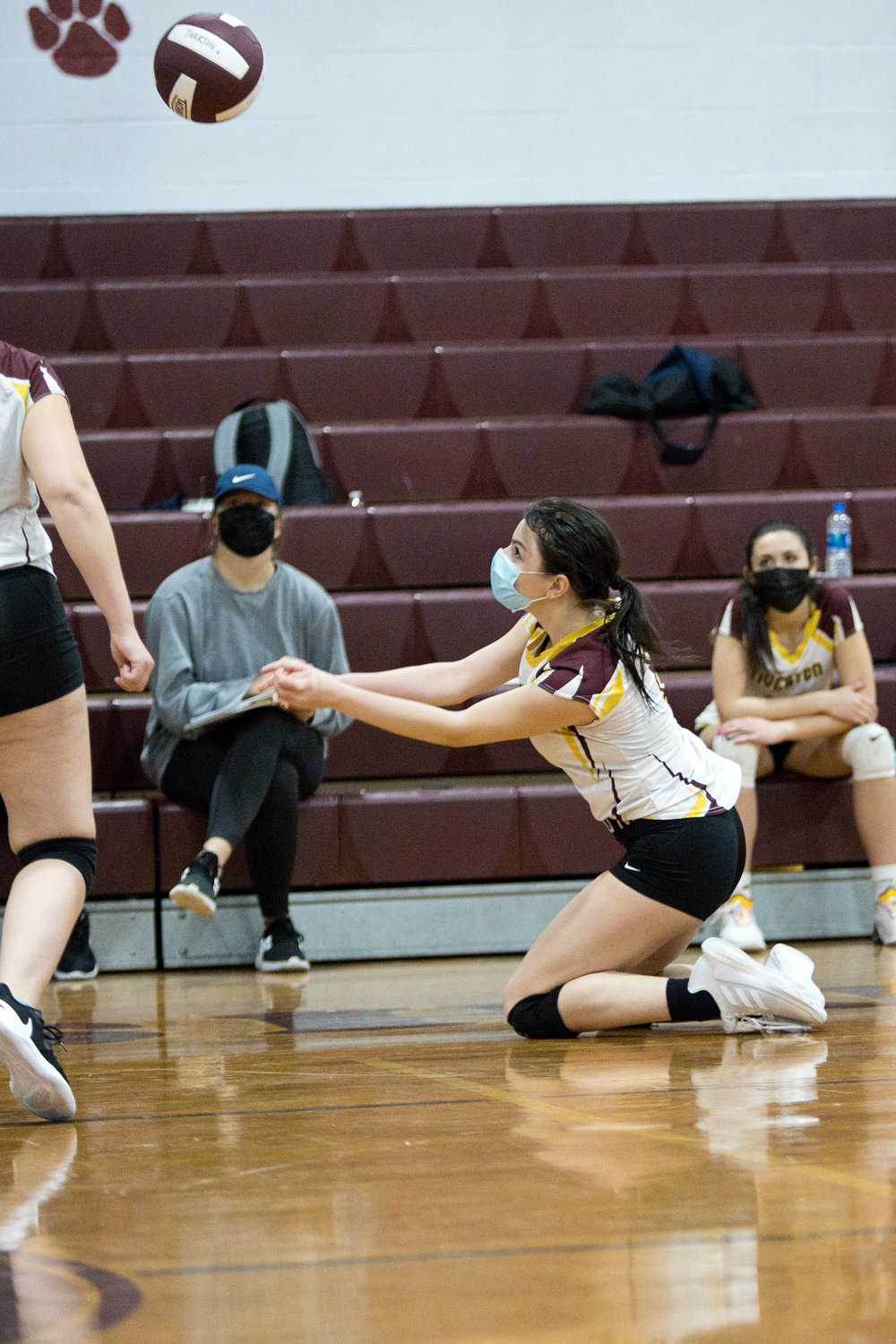 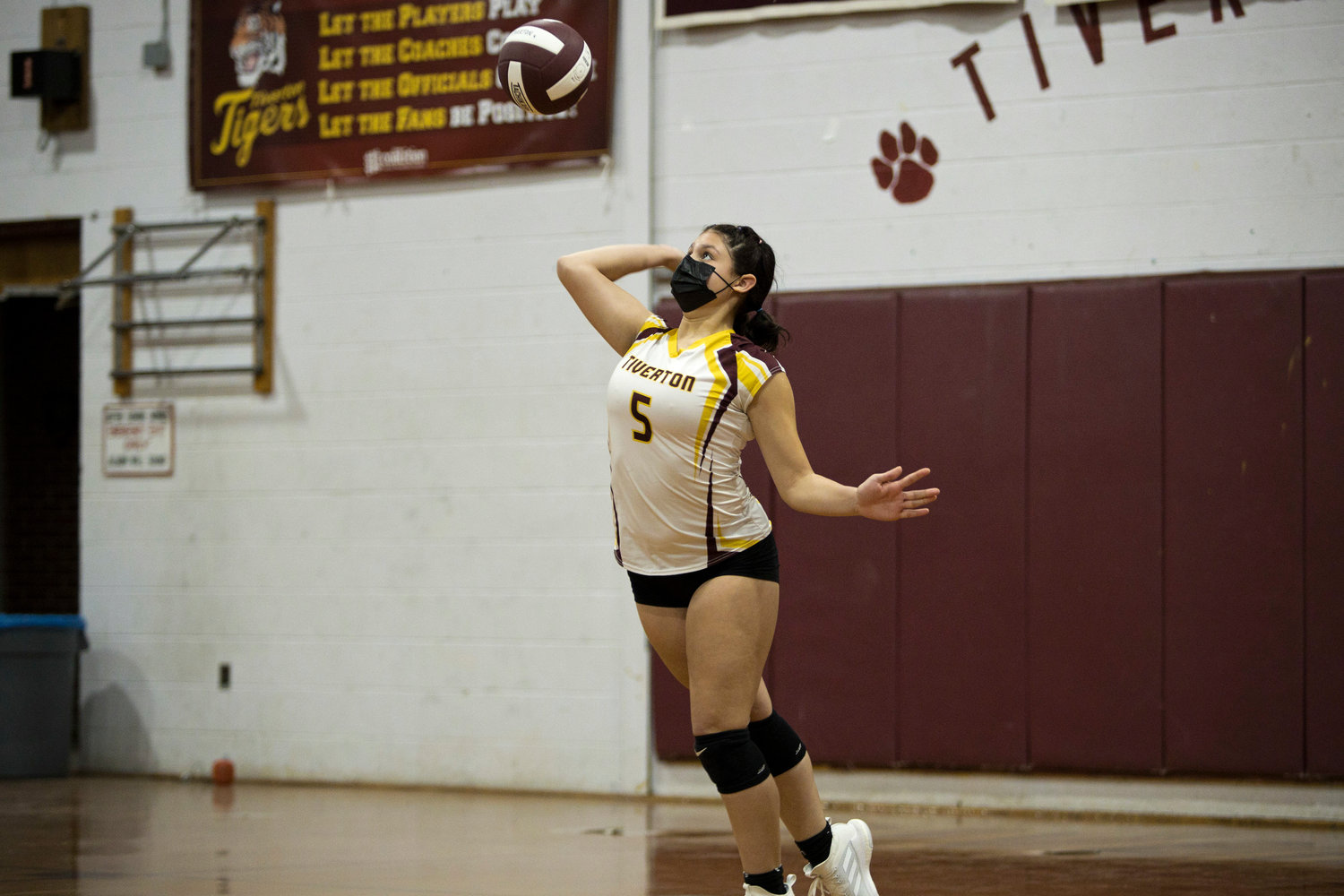 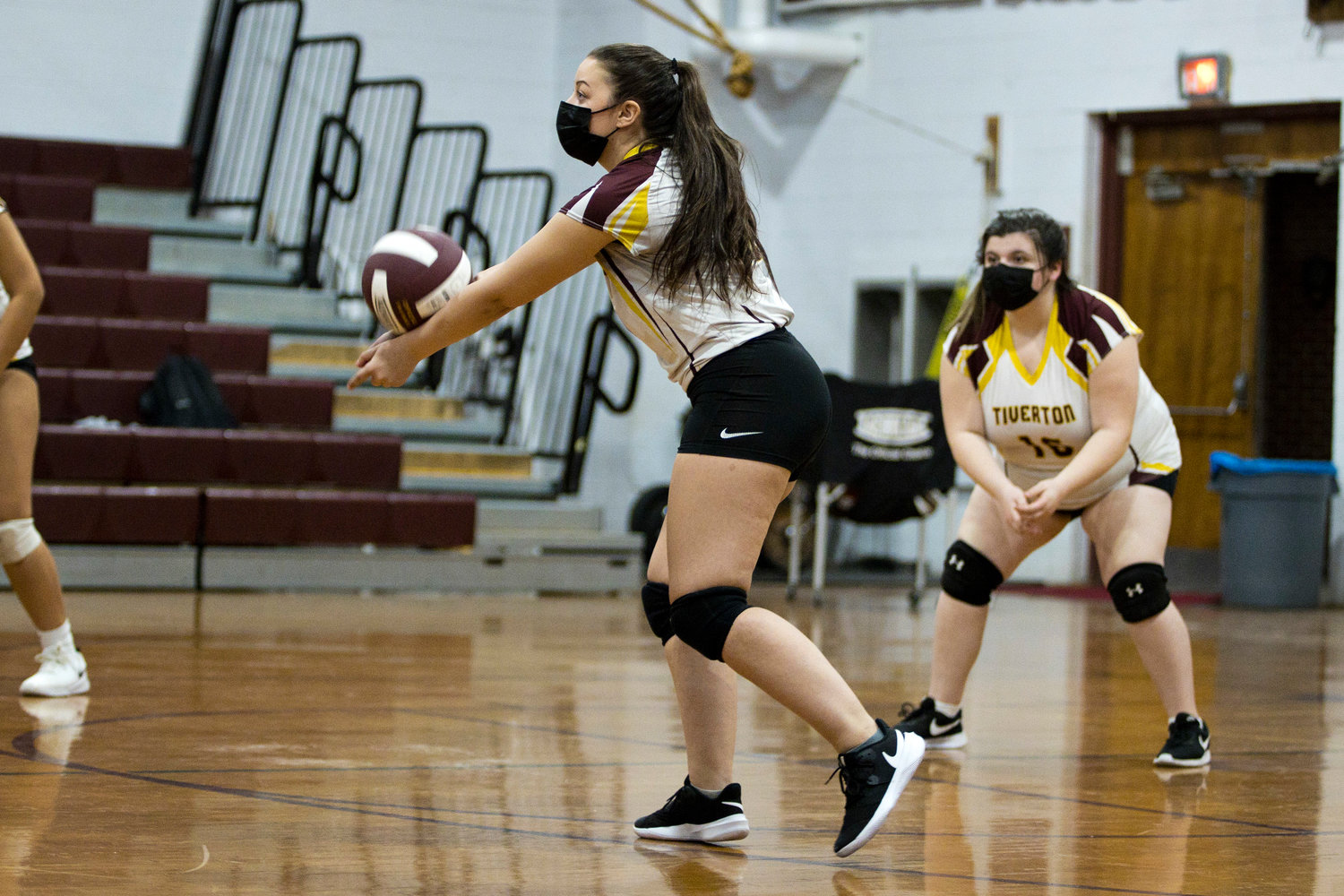 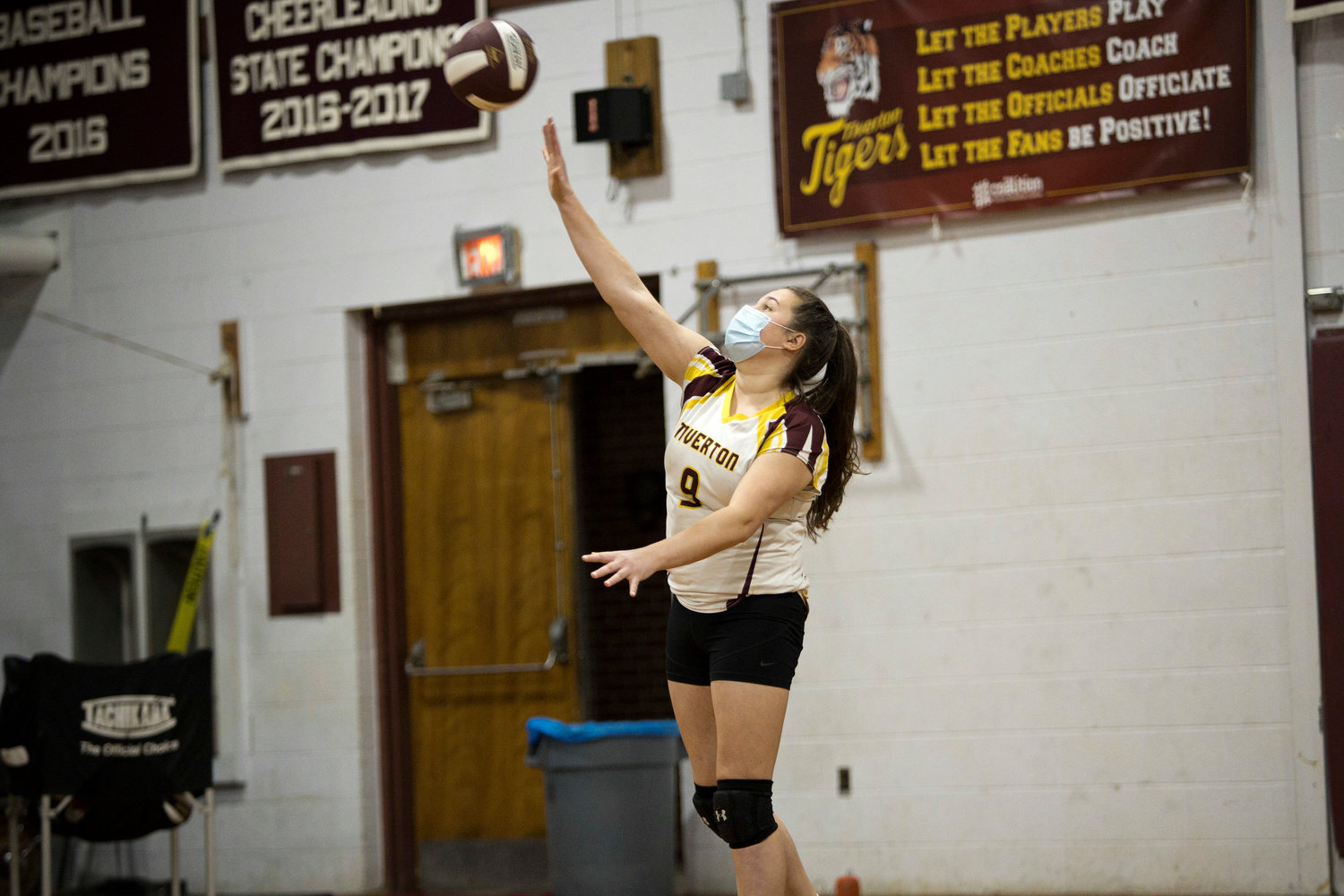 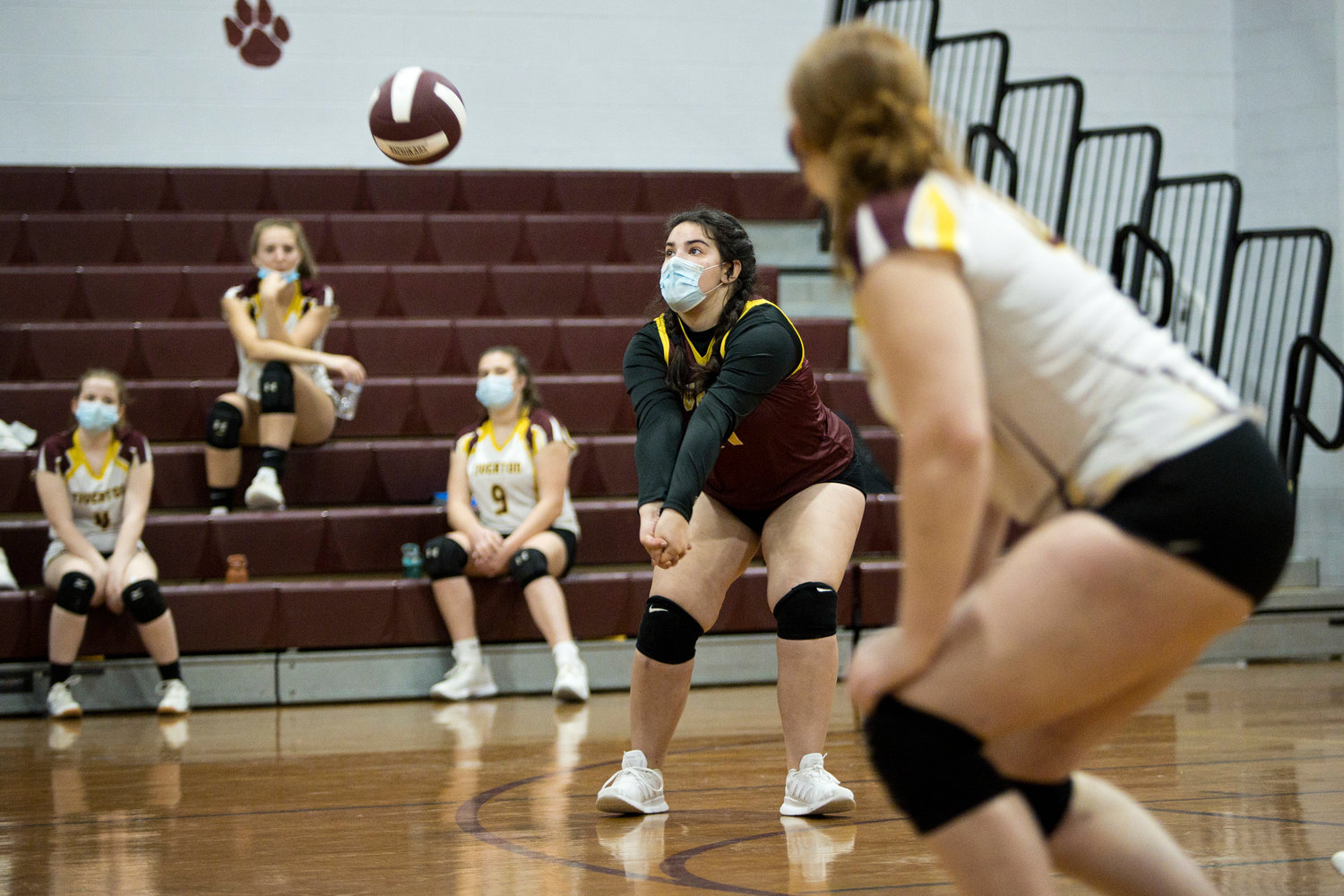 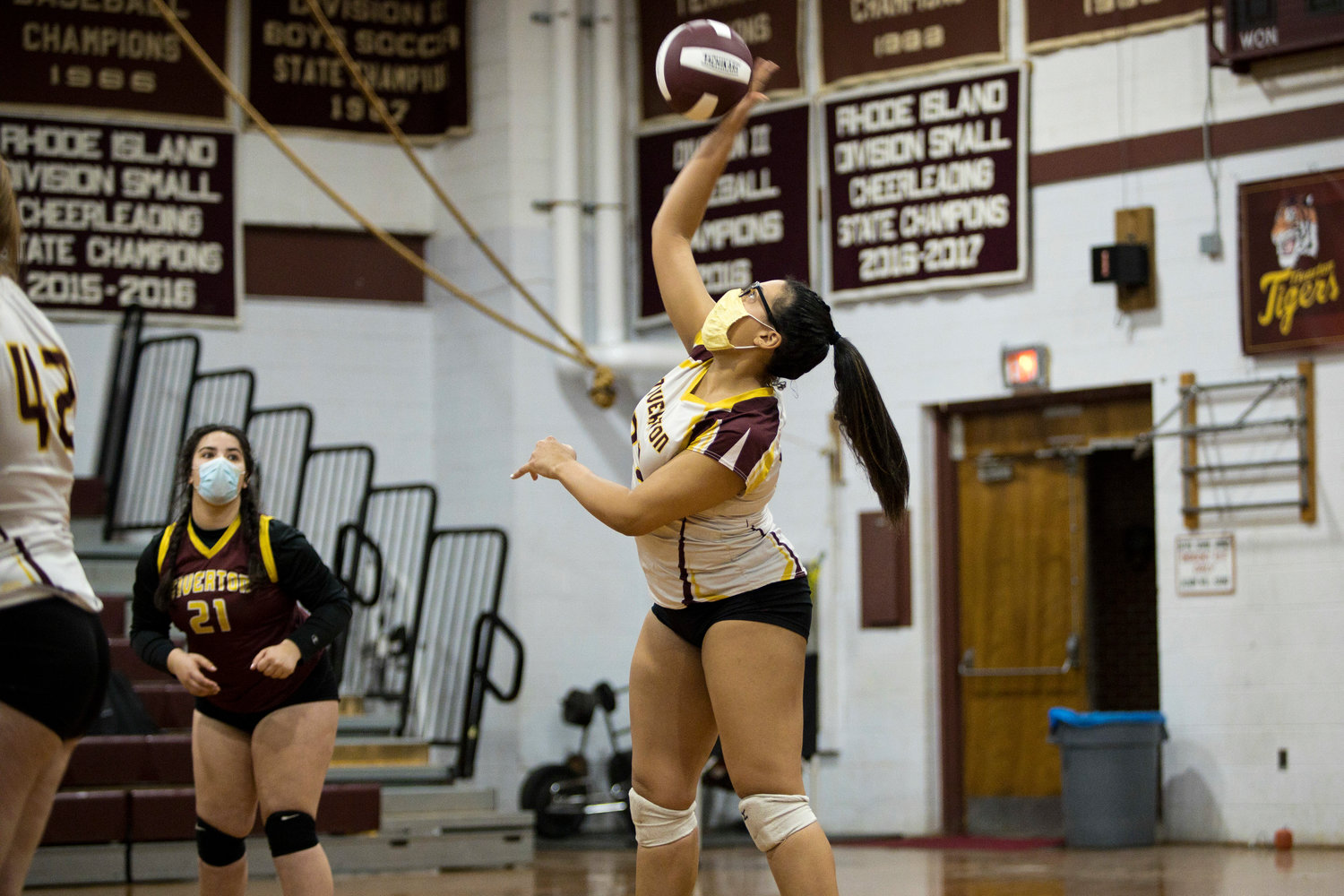 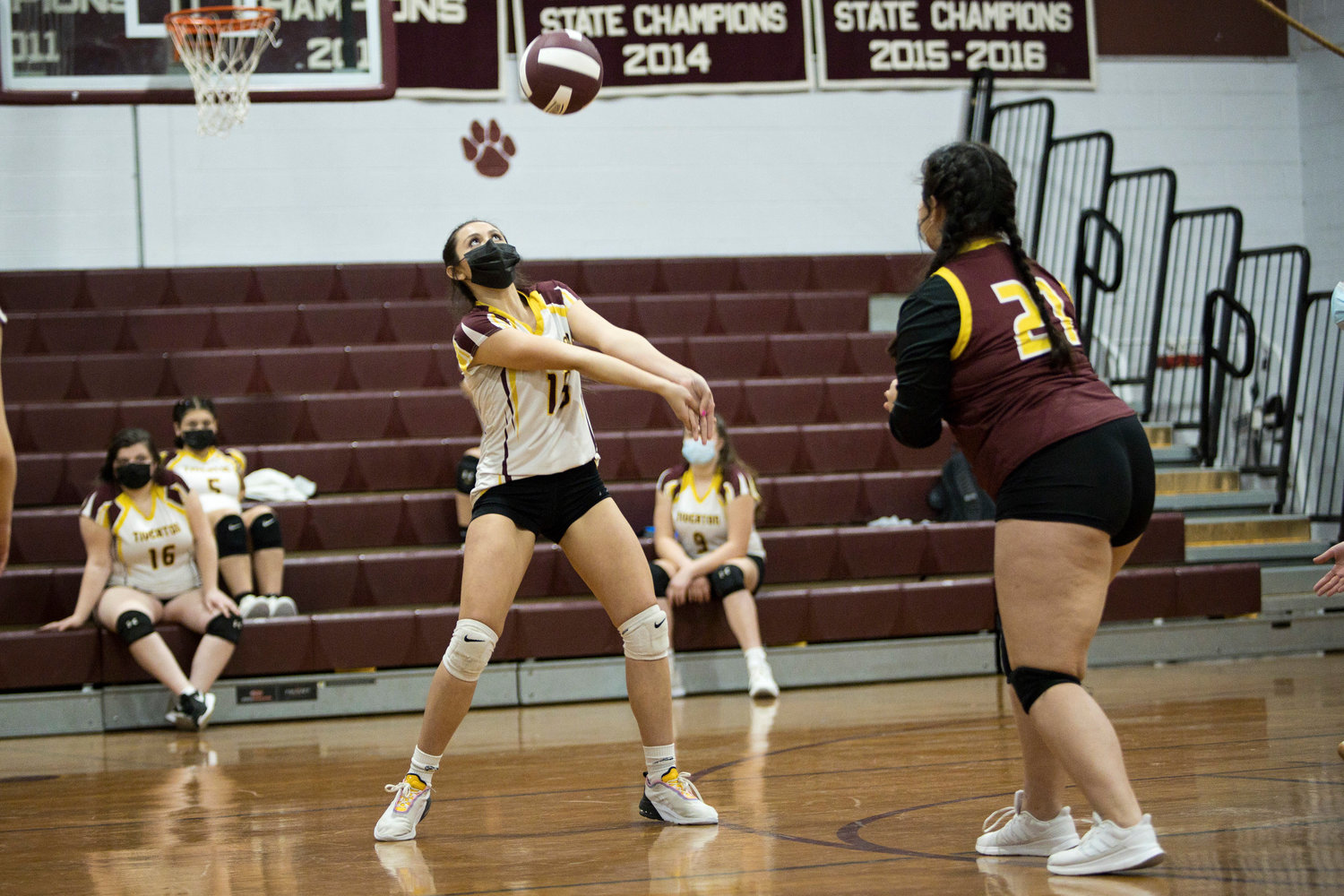 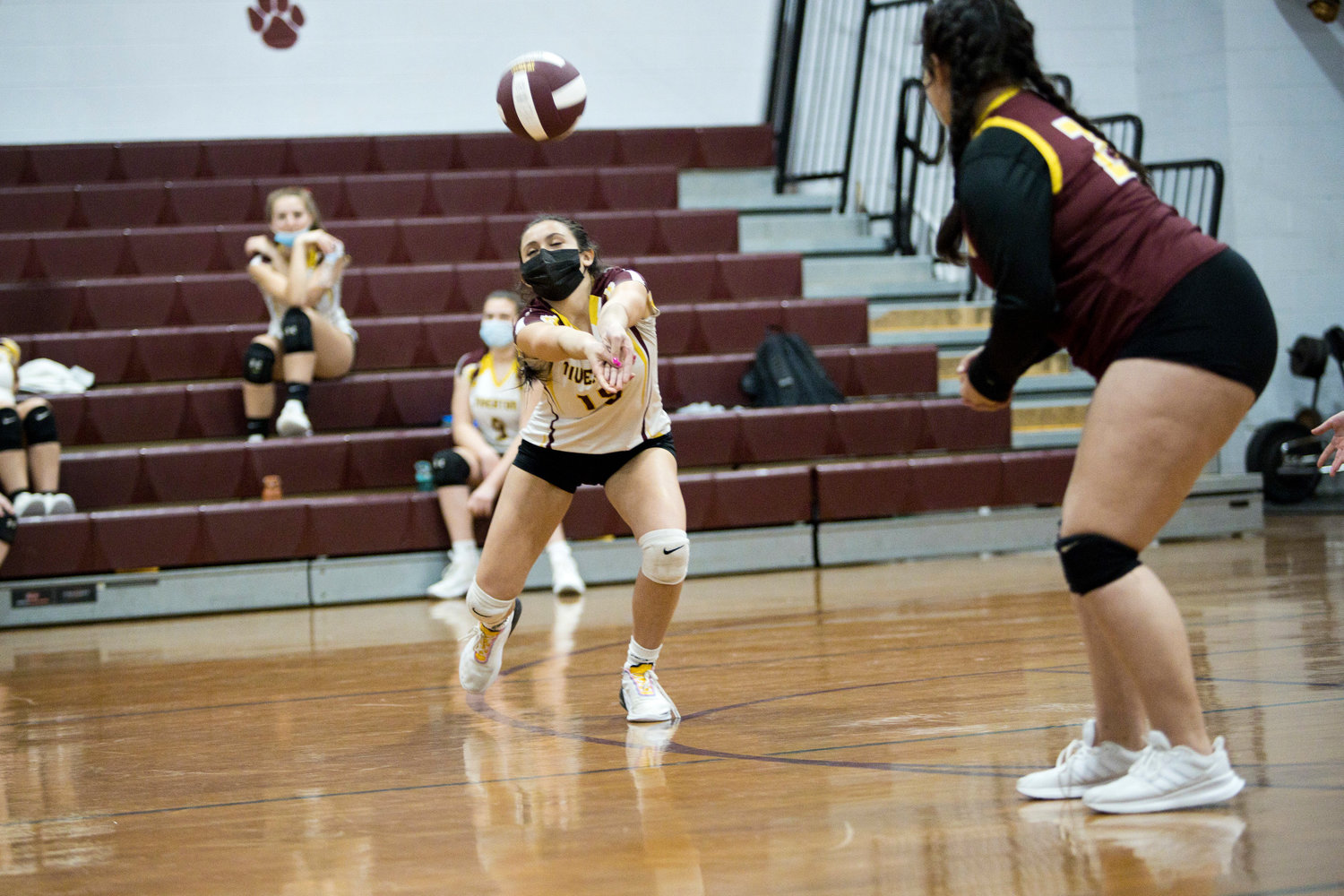 “Olivia, because of her serve and controlled passing, I would put her at being the best all around player on the team,” said Tigers head coach Kerri Allder. “She normally has the most kills per match, a great back row attack and an awesome and consistent jump serve.”

Coach Allder also credited Molly Richardson for her strong play at the net.

“Molly’s a dominant force,” said Coach Allder. “And she is also a very good back row player as well.”

Junior Gabby Piscani, the team’s new setter, has been making strides during the last few games. Piscani tallied 4 aces and 4 assists during the match against Paul Cuffee.

“Gabby was the back up at the beginning of the season,” Coach Allder said. “She has good hands and a great jump set but is still working on her decision making during the game.”

Coach Allder feels that the team’s hitting is getting stronger and more consistent as the short season progresses. But the team’s strength is their defense with libero, Olivia DeMacedo.

“Olivia has been playing well in the back row. She is a hustler and is able to read the hitter very well,” Coach Allder said.

“Paul Cuffee is new to the Rhode Island Interscholastic League,” said Coach Allder. “We easily won, but it gave us the opportunity to play with no pressure and give more players a chance to get onto the court.”

Before playing Paul Cuffee, the Tigers had dropped two away matches in a row, at Mt. Hope and at PCD.

“I think it was a little tough playing two talented teams back to back,” coach Allder said. “We made a lot of mistakes and had too many missed serves. We dug some holes and couldn’t get out of them,” said Coach Allder.

Still the team has been working hard and getting better quickly due to the shortened season.

“We have been working extra hard at practice, to work out our kinks, work on our weaknesses and persevere through the tough matches,” coach Allder said.

The Tigers play two home matches this week, against Shea on Tuesday and against Times 2 Academy on Friday.

“I am optimistic that we’ll be ready and we will have a successful remainder of the season,” Coach Allder said.