PORTSMOUTH — If you haven’t seen all the #SethStrong signs or bracelets around town, you’ve been living under a rock this past month. 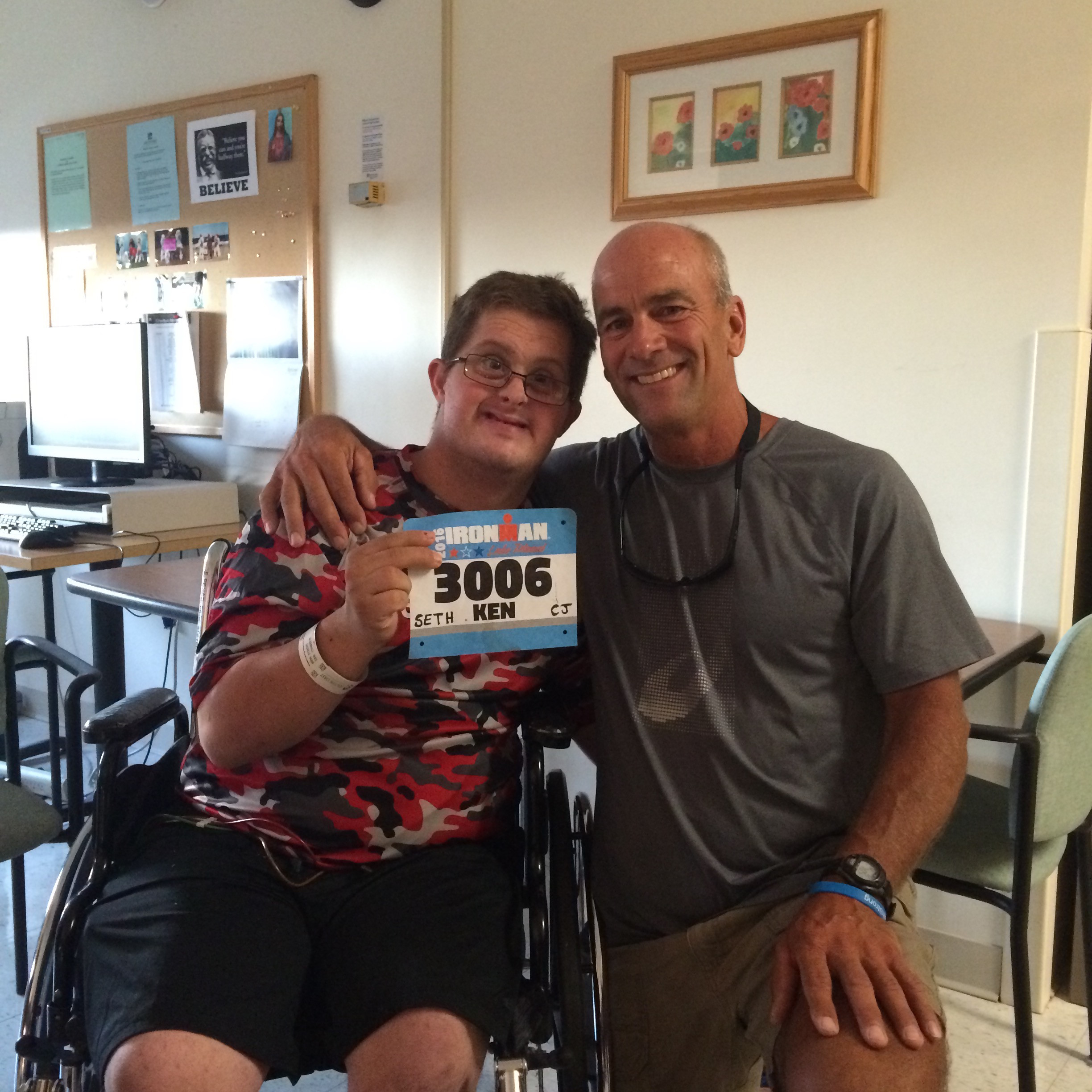 Seth Dame holds the Ironman race bib that was worn by his uncle, Ken Stone (right) during his successful triathlon in Lake Placid, N.Y. on July 24. There are two additional names on the bib: Seth and CJ — Mr. Stone’s father, who passed away on Christmas Day last year. 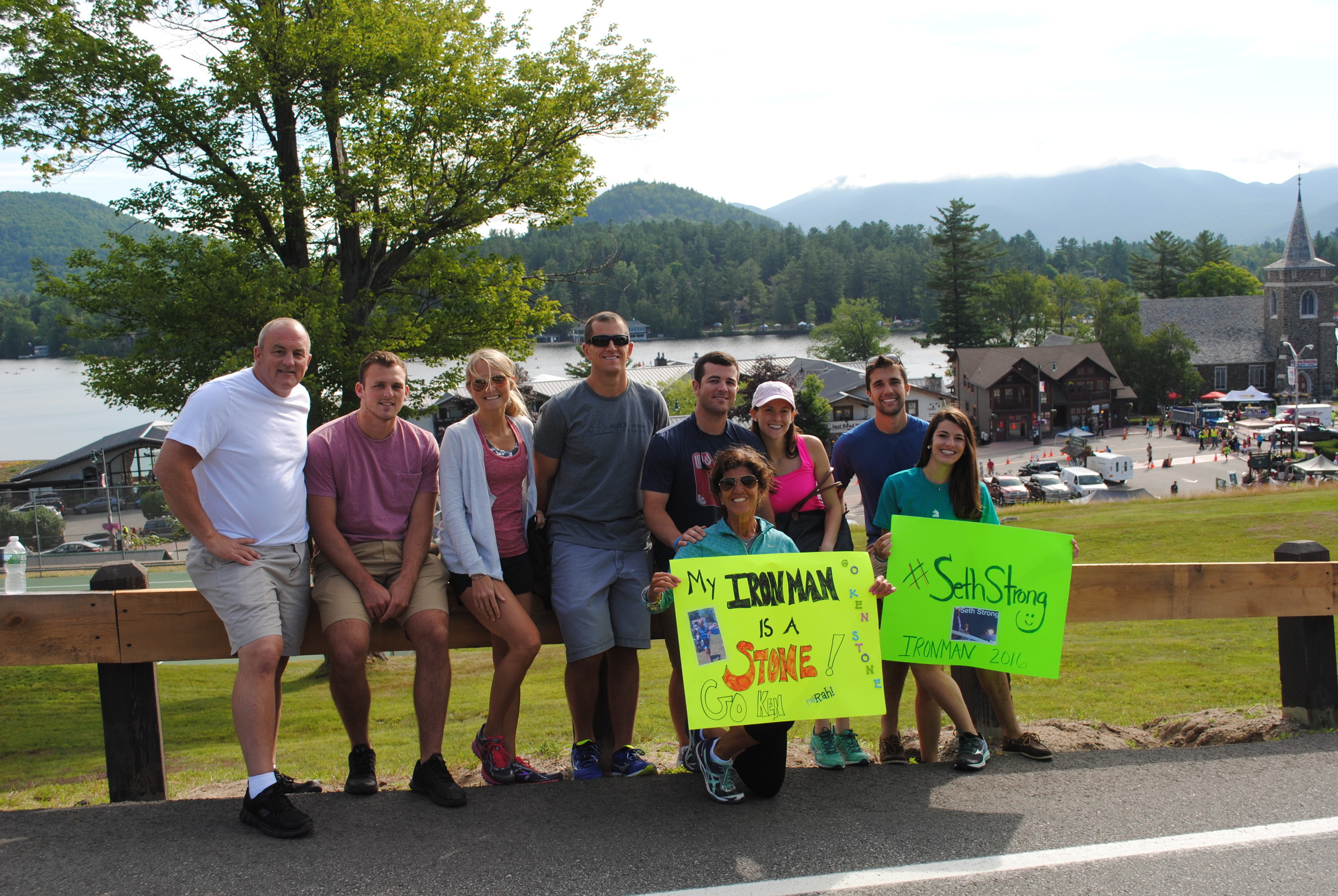 Supporters root on both Ken Stone and Seth Dame during the Ironman Triathlon in Lake Placid, N.Y. on July 24. 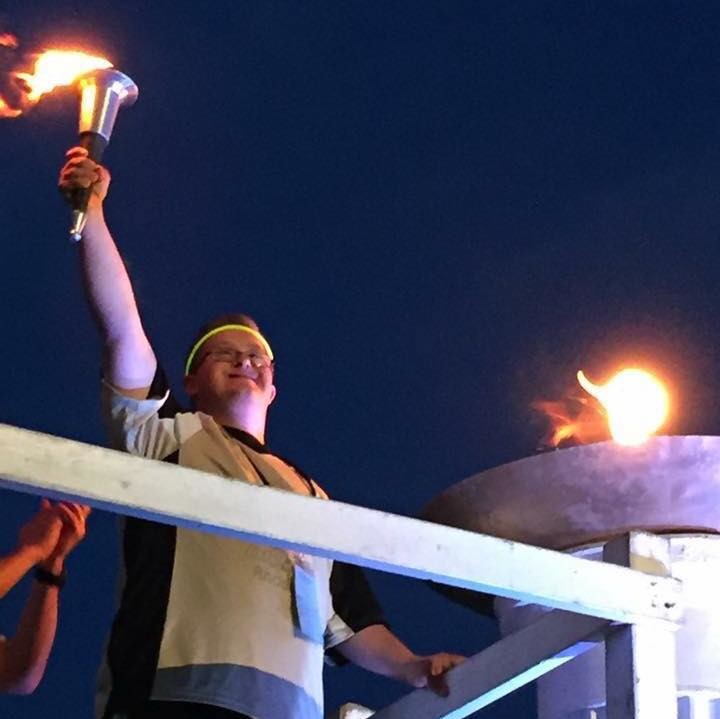 Seth Dame lights the torch to signify the start of the 2016 Rhode Island Special Olympics at the University of Rhode Island back in June. 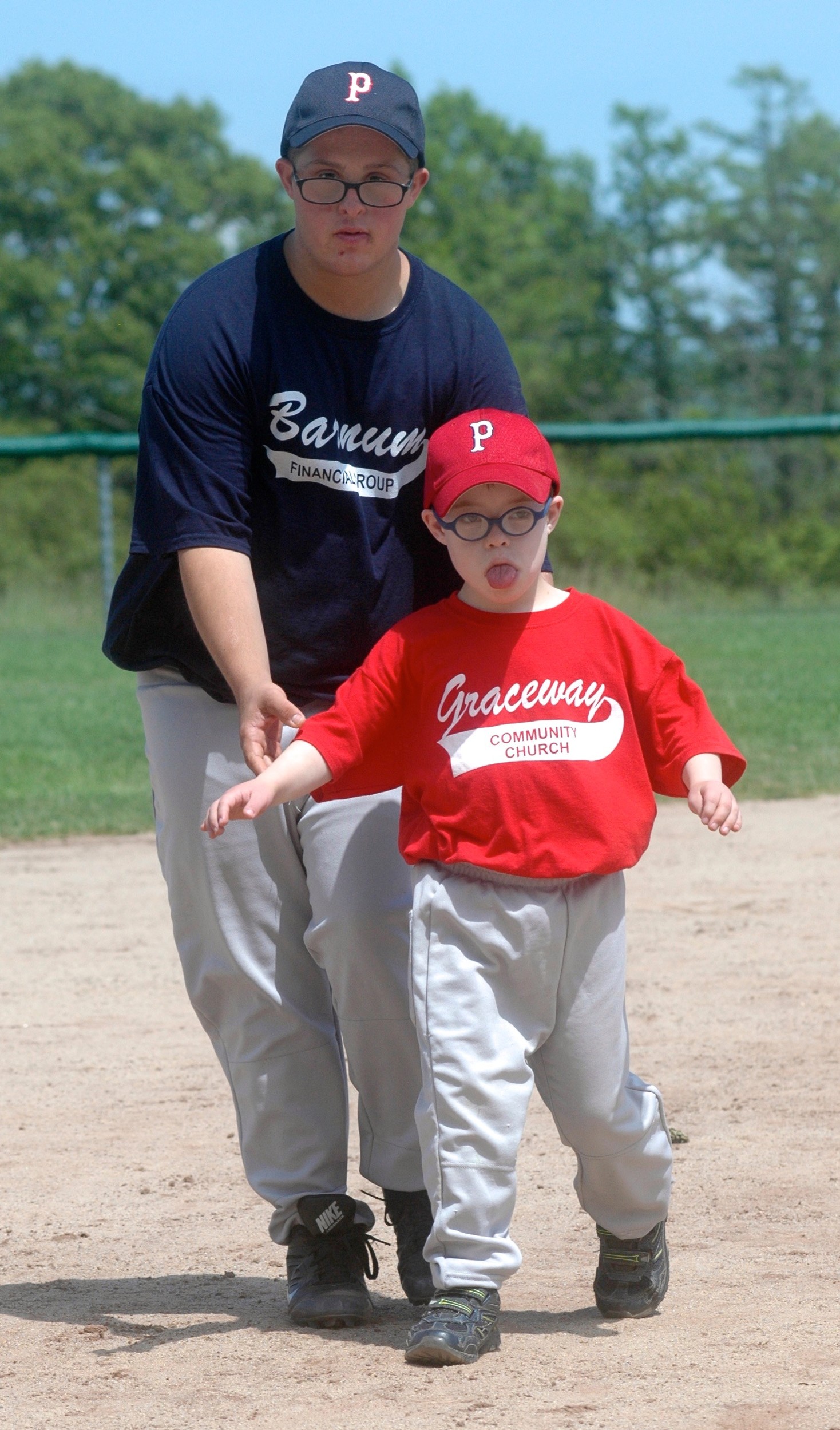 Seth Dame helps Jack Garcia, then 8, round the bases at the 2013 Challenger Jamboree at Glen Park.
Jim McGaw 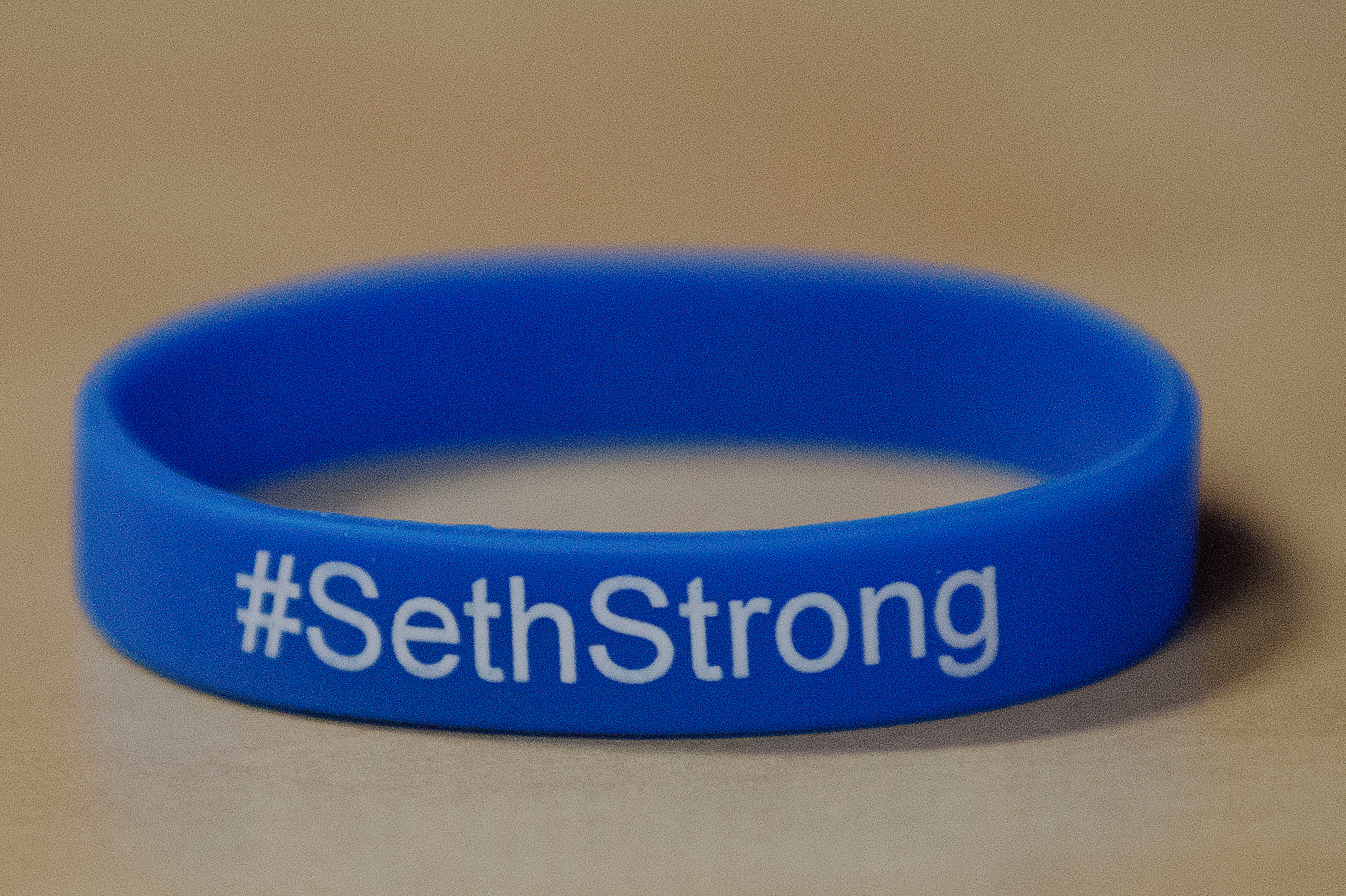 All proceeds from the sale of #SethStrong bracelets go to Rhode Island Special Olympics, in Seth Dame's honor.
Previous Next
Posted Thursday, August 4, 2016 8:01 am

He’s such a fighter; look what he’s been dealing with during this whole ordeal. He’s a very brave kid.”
Ken Stone
Jim McGaw

PORTSMOUTH — If you haven’t seen all the #SethStrong signs or bracelets around town, you’ve been living under a rock this past month.

It’s all for local resident Seth Dame, a 24-year-old Special Olympian with Down syndrome who’s been hospitalized since July 1 with a serious and sudden illness. Ever since, the community has rallied around the Dames with its support for the popular and active young adult who loves sports and friendly pranks, and whose courage in the face of adversity has been an inspiration to many.

Ken said Seth was the real Ironman that day because he kept a promise to his uncle to get better. Just weeks prior to the Ironman competition, Seth was placed in an induced coma and breathing from a ventilator at Charlton Memorial Hospital in Fall River. Now out of the coma and off the ventilator, he’s been undergoing physical and occupational therapy at the hospital this week.

“The progress he’s made has been incredible,” said Ken.

Seth is not technically Ken’s nephew. “He’s my first cousin’s son,” he said, explaining that he and Seth’s father, Larry Dame, are eight days apart in birth. “We’re like brothers almost. Seth is part of our family, along with his other two brothers. He calls me Uncle Kenny.”

Ken said the day before the race, he asked his wife, Lori, to film a video of him for a text he sent to Seth.

“It basically said, ‘Seth, a lot of people are thinking about you and wondering how you’re doing. I’m up here in Lake Placid and today I’d like a little bit of help from you. I want to bring you along with me for this journey. I know I can do this with your help,’” said Ken.

He set one condition for Seth, however.

“He had to promise that he was going to get better,” Ken said.

On his official Ironman race bib, Ken wrote the names of both Seth and Ken’s father, CJ, who passed away on Christmas Day last year. Ken said his dad and Seth were with him the entire race.

After he finished the race, Ken received two videos back from Seth.

“This is basically the first time he was talking,” said Ken. “He said, ‘Thank you, Uncle Kenny, for bringing me on the journey. I promise to get better and I’m going to work really hard.’”

Ken then watched the second video, which floored him. It showed Seth taking his first few steps since he had gotten sick.

“Tears were coming down my face,” said Ken, who later went to visit Seth at the hospital.

Ken said it’s tough to describe how special Seth is.

“He’s so down to earth and he’s so innocent, but then he’ll turn around and pull a prank on you or tell a joke,” he said. “He’s such a fighter; look what he’s been dealing with during this whole ordeal. He’s a very brave kid. To be a part of him is a blessing for us.”

Kim Dame said her son has been making solid progress ever since July 1, when Seth got dizzy, fell and cut his lip during a graduation party with friends.

“It required stitches and as we were bringing him to the ER, he got sicker and sicker,” said Kim. “They found a pulmonary embolism, which is pretty significant. He also developed pneumonia, and it created all this stress on his heart.”

Seth was intubated on a ventilator for more than two weeks, but doctors got his pneumonia under control and he’s now doing much better, she said.

“It’s hard to believe he’s actually up and walking a few steps,” said Kim. “Fortunately, all of his activities in Special Olympics and the fact that he’s so active, probably saved him. They’re trying to build his stamina up and he’s very determined.”

Seth not only participated in the Rhode Island Special Olympics this June at the University of Rhode Island, he lit the ceremonial torch during the opening ceremonies.

“He was quite proud and honored to be chosen. It was a highlight moment,” his mom said.

Before he got sick, Seth stayed busy with other activities, including his two jobs. He’s on the grounds crew at Green Valley County Club and also works the front desk at the Middletown YMCA.

Seth has a long road ahead of him, but the overwhelming support he’s received from the community has done much to lift his spirits, said Kim.

“The first week, it was really touch and go. We had no certainties. The prayers and the support from the community played a big role, as well as Seth being so strong,” she said.

Seth is constantly receiving cards, pictures and warm wishes at the hospital. The #SethStrong bracelets that are being sold and worn around town — all proceeds go to the Special Olympics in Seth’s honor — also mean a lot to the family, she said.

“We are so grateful for the overwhelming and amazing support from our family, friends and community at large,” said Kim. “I can’t even believe it, to be honest. We’re so fortunate.”

Added Ken, “You can’t drive around town without seeing some Seth Strong signs. I know the whole community has been following his every step.”

Just as Seth and the rest of his family were following Ken’s steps during his triathlon on July 24. “The Ironman has a website where you can watch the progress along the way with a live stream,” said Kim.

“Ken is such a humble guy. He probably didn’t even tell many people he was doing this. He’s been an inspiration to our family.”