After months of set-up, Twelve Guns opens the taps

That is how Kyle Michaud would refer to his evolution into brewing, after spending years studying and working in the marketing field. A recent graduate of the University of …

After months of set-up, Twelve Guns opens the taps 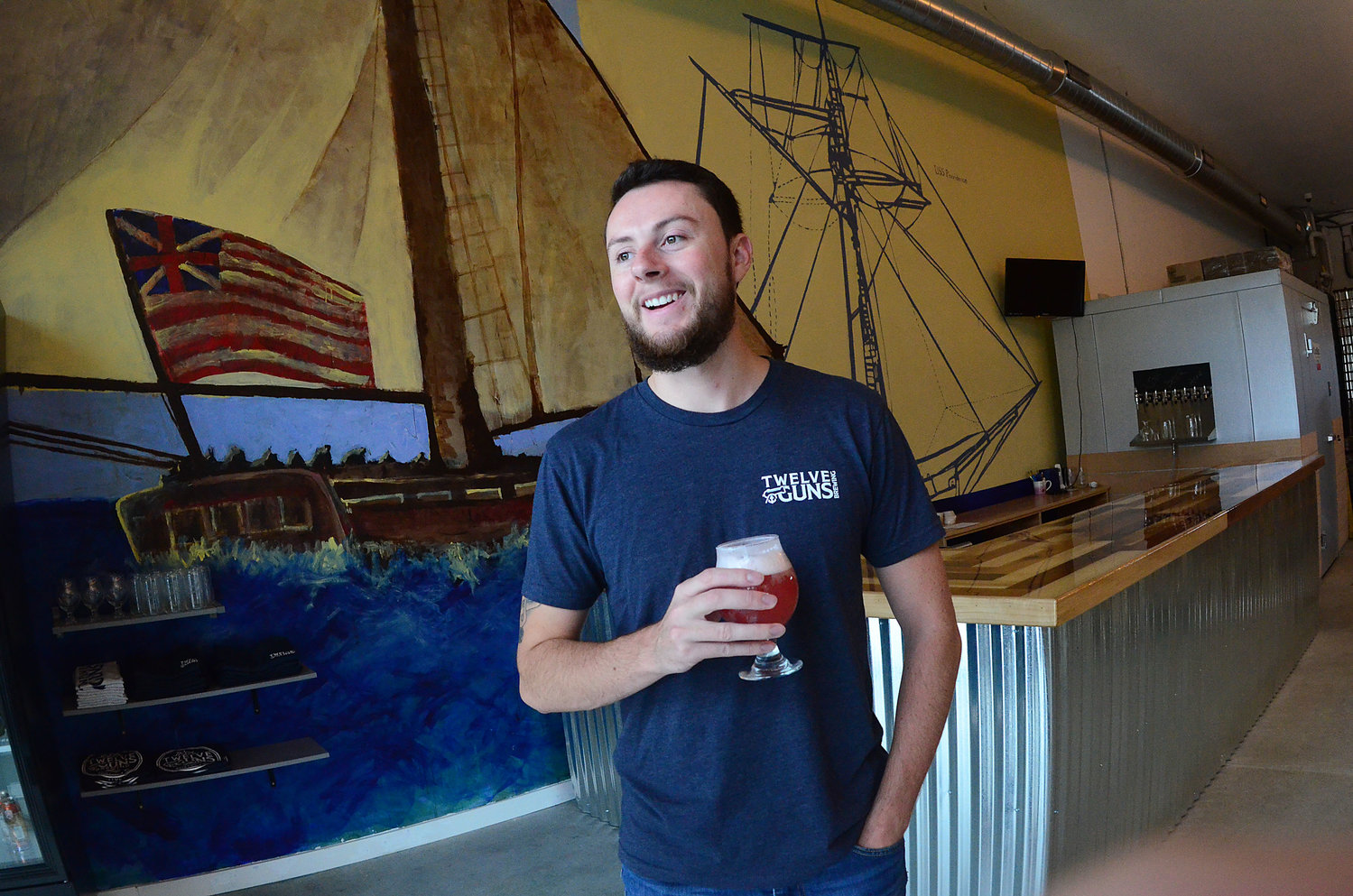 Kyle Michaud was working in a marketing role and didn’t really love what he was doing — so he decided to become his own boss and open Bristol’s first brewery.
Photos by Richard W. Dionne Jr. 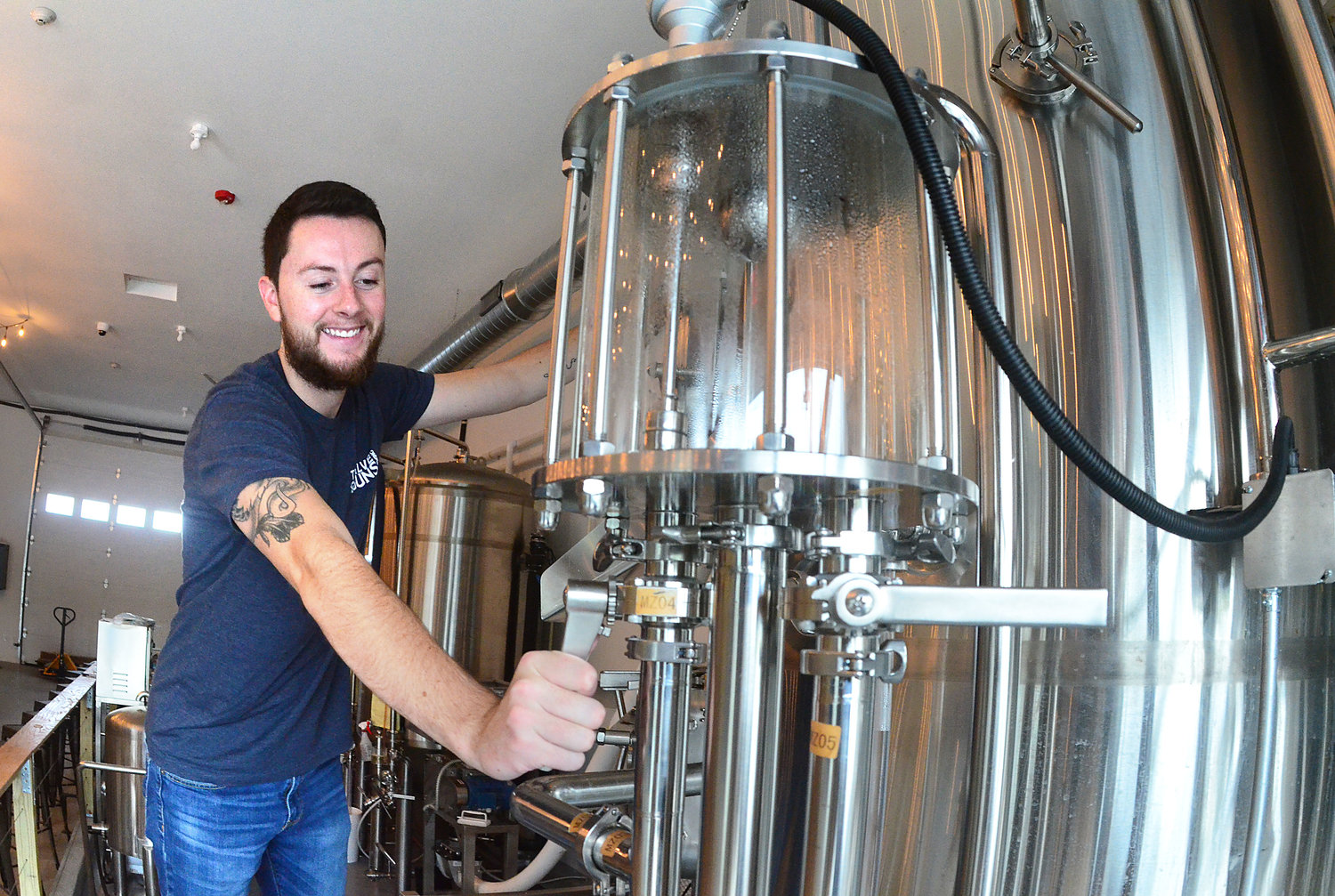 Kyle Michaud demonstrates how to use some of his new brewing equipment. They opened with four brews and plan to add another four soon. 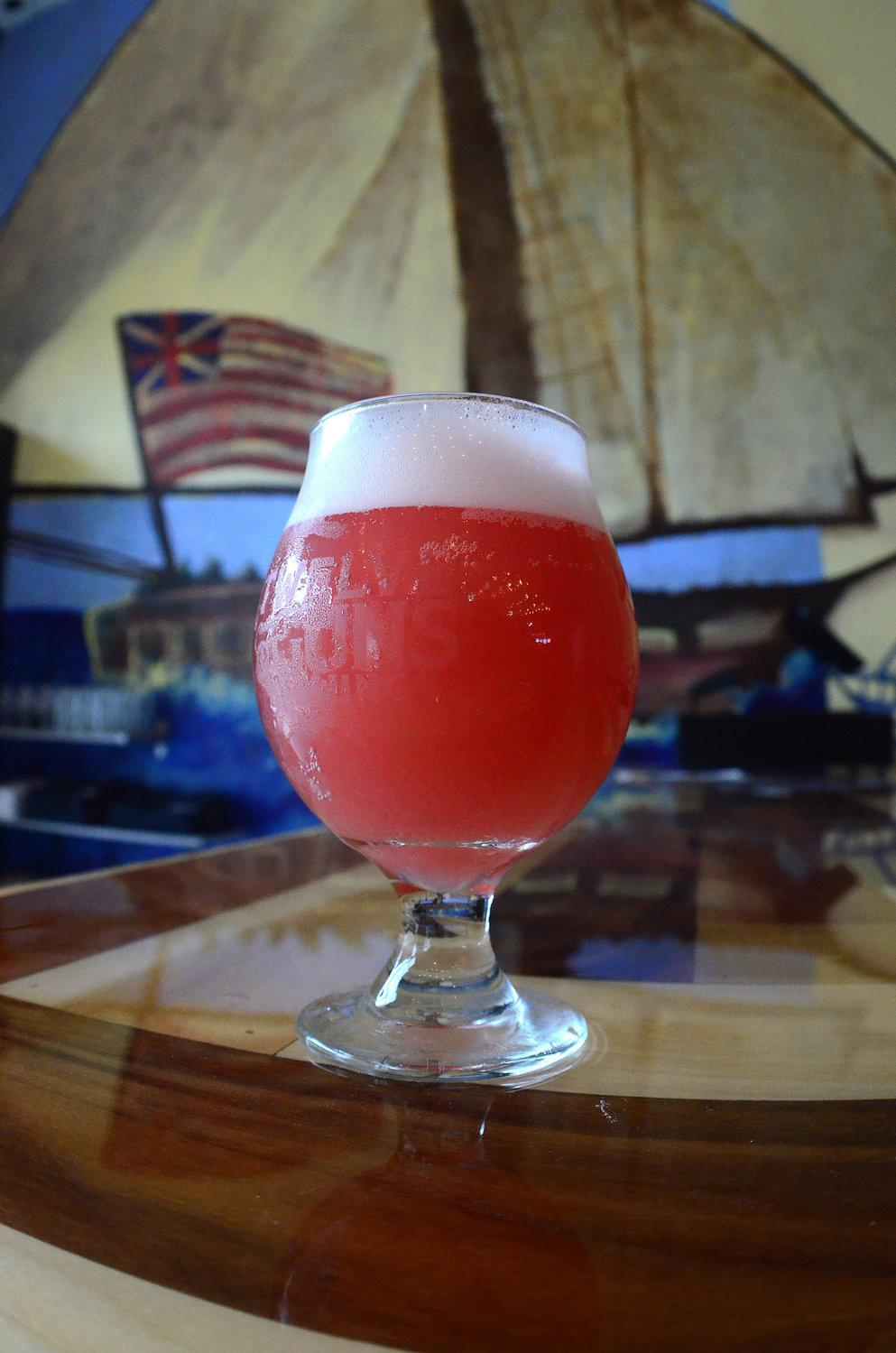 That is how Kyle Michaud would refer to his evolution into brewing, after spending years studying and working in the marketing field. A recent graduate of the University of Hartford, he got a job at the Kraft Heinz company, but he could tell something was missing — he needed to be his own boss.

All the while, Mr. Michaud had begun dabbling in the food and beverage industry, experimenting first with making wine and then cider, but neither had gone particularly well. Then he bought a homebrew kit off Amazon, and it all began to change from there.

A whirlwind of a year

It has been almost three years since Mr. Michaud got that homebrew kit in the mail, and a lot has changed for the Connecticut native since then. When his early attempts at brewing met with success, his friends encouraged him to transform his hobby into a career. Eventually, Mr. Michaud enrolled in the professional craft brewing certificate program at Johnson & Wales University, allowing him to transition, he said, from “basically following a cooking recipe” to understanding the deeper science behind brewing.

Around the same time, Mr. Michaud started to scope out possible locations for his own brewery. His search, however, was casual; there was no real intent of getting one up and running this soon. Yet after finding his way into Bristol, Mr. Michaud knew he just found Twelve Guns its home, signing the lease for 549 Metacom Ave. at the beginning of this year.

As it would turn out, the town was equally as enthused about the idea of a brewery opening in Bristol, approving a special permit in February to help get the ball rolling.

“They kind of … I don’t want to say kicked me off a ledge,” Mr. Michaud said with a laugh. “They were a deciding factor.”

A lot of hard work

While he has only good things to say about his interactions with both the town and state, there were numerous other challenges Mr. Michaud experienced along the way. He had heard that getting a brewery up and running within a year would be difficult, and he can certainly attest to that.

There was the issue of applying for his federal license in the middle of a government shutdown; the fact that, at the time he took over the building, the structure still had no walls.

There was the reality that Twelve Guns was not fully funded until March; until then, Mr. Michaud was fronting the money himself. While that funding finally allowed them to order the custom equipment Mr. Michaud helped to co-design, it took nearly five months to actually get it here. Once received, there was the learning curve of how to properly operate and maintain it.

“Going from a homebrew — which is basically making beer in a lobster pot — to now having basically half a million dollars in equipment …it’s a lot different,” Mr. Michaud said.

Thankfully, he was not alone; Mr. Michaud had the support of the Rhode Island Brewers Guild behind him, there to answer any questions he may have had, along with the members of his staff, helping him along the way.

“When they say hire good people, I can’t stress that enough,” Mr. Michaud said. “If I were here doing it by myself, we wouldn’t have even remotely close to the quality of product we’re about to put out on day one.”

By the time Twelve Guns opened this past weekend, Mr. Michaud was ready to show off all the hard work that had gone into starting up his brewery. With rows of industrial lights strung overhead and a line of communal-style tables directly below, customers had unobstructed views of both the brewhouse and stainless-steel production facility (“it’s like furniture to me,” Mr. Michaud said) while enjoying their drinks.

“I wanted to make them feel like they were a part of the brewery,” Mr. Michaud said.

He also wanted to showcase the piece of Rhode Island history behind the brewery’s namesake, commissioning Roger Williams University art students to hand-paint a mural of the Revolutionary War-era twelve-gun ship, the USS Providence. It was painted right next to the taproom, where for the grand opening weekend Mr. Michaud and his team had four different brews on deck. There was “The Meg” blonde ale; “You Make Me Coconuts” toasted coconut stout; “Torpedo Station” New England IPA; and “Gone Coastal” cranberry Berliner weisse.

Though the inspiration behind every ale varies, it is important to Mr. Michaud that all their recipes can be replicated, and that each one is fundamentally sound. Unlike many other breweries, Twelve Guns uses a reverse osmosis system, filtering the water out first before going in and adding different salts. The process may be longer, but it creates a baseline for Mr. Michaud and his team to start with, allowing them to customize different chemical levels that generate specific flavor profiles.

“Your water has to do with everything about a commercially produced beer,” Mr. Michaud said.

As they move forward, Mr. Michaud, with his self-described “mad-scientist brain,” intends to continue experimenting with different, unique varieties — hoping that, just like him, others will be wanting to try out some unconventional brews when they stop in, too.

“I think there’s a turning point where a lot of people are like that, too,” Mr. Michaud said.

If their grand opening weekend is of any evidence, then Mr. Michaud is right; within an hour of opening on Saturday, Twelve Guns had already sold out of all their cans of beer.

With the success of the weekend now behind them, Twelve Guns will gradually introduce four additiona — a red IPA, Belgian witte, nitro cream and blood orange pale ales. Mr. Michaud will also continue talks with the building owner, working to set up full canning production right next door.

While no food is sold at Twelve Guns, patrons are welcome to stop by the dog-friendly brewery every Wednesday through Sunday, taking crowlers or six-packs of their 12-oz cans (up to a case) to go, or enjoying flights and draft pours (up to 72 ounces) in-house. Fans of Twelve Guns can also look for them at the 2020 Rhode Island Brew Fest, slated for Saturday, Jan. 25. All the while, Mr. Michaud will continue sharing his concoctions with the Bristol community, enjoying every moment of the brewing process along the way.

“It’s funny,” Mr. Michaud said, “you can be in the best company in the world, but if you’re just not engaged in the way that’s personally fun to you, it just doesn’t work out.”