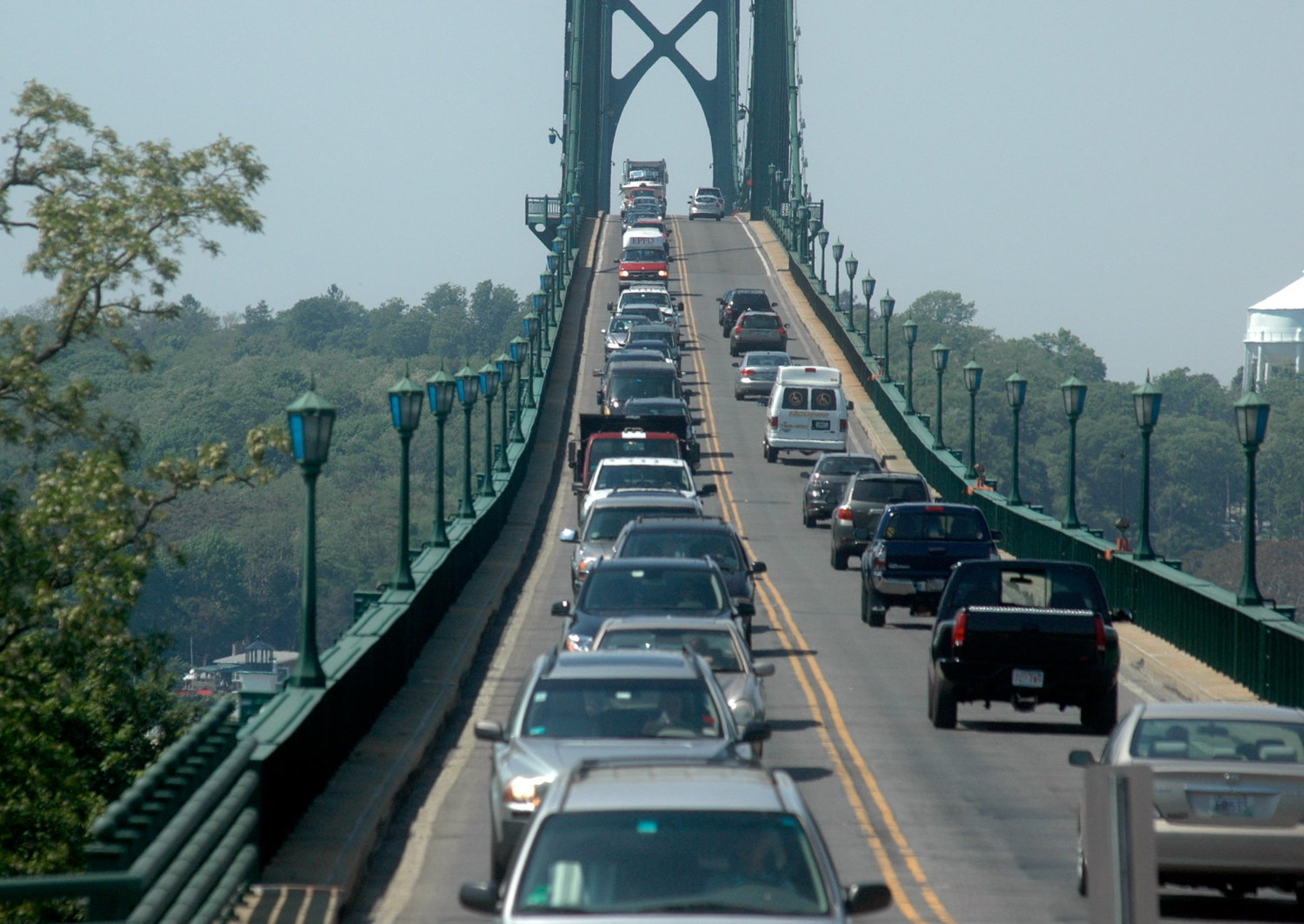 Automated license plate readers will soon be installed on both sides of the Mt. Hope Bridge to assist police in their response time to prevent suicides.
Posted Tuesday, June 14, 2022 7:00 pm

If we can prevent one person from dying from suicide, then the program in my opinion will be well worth it.”
Portsmouth Police Chief Brian Peters
By Jim McGaw

The Portsmouth Police Department will be collaborating with its colleagues in Bristol, where a similar program was approved last month. The cost of the pilot program will be paid by the Matthew Patton Foundation and the East Bay Community Action Program, at no cost to taxpayers. Sgt. Matthew Patton, a graduate of Mt. Hope High School in Bristol who suffered from mental health issues, died by suicide in May 2013 at the age of 23.

The cameras, provided by a company called Flock Safety, could be up and running within “six weeks to a few months,” according to Police Chief Brian Peters, who outlined how they will be used.

“The goal of this initiative is to utilize the ALPR to alert police officers when a license plate associated with a suicidal individual is identified as heading towards the Mt. Hope Bridge. Officers would then be immediately dispatched to the area to locate the individual in a mental health crisis, and intervene in our efforts to prevent suicide,” Peters said.

Between 2016 and 2020 Portsmouth Police responded to the bridge about 1,100 times — 62 of them to assist people with a mental health crisis, the chief said. During that period, 17 people died from suicide after jumping from the bridge, Peters said. Bristol Police, he said, have received about 200 calls over the past nine years involving suicidal people.

The system would be similar to an Amber Alert (for a child abduction emergency) or a Silver Alert (for missing elderly people), except it’s for people going through a mental health crisis and who are possibly suicidal, he said. If a be-on-the-lookout (BOLO) is issued after a family member or loved one reports a suicidal person who is on the road, an ALPR on either side of the bridge could alert police within 10 seconds, Peters said.

When questioned about the police response time, Peters said it takes about “a couple of minutes” for an officer to get from the police station to the Mt. Hope Bridge. That may seem like a tight window, but Peters said people who are intent on jumping don’t usually do it right away, which buys police some time.

“Sometimes they make several passes over the bridge. They do not necessarily stop the first time,” he said.

He shared a recent success story from Chesterfield, Mo., where an ALPR helped police track a woman whose family was concerned about her mental health. She was located alive, although in need of medical attention, he said.

“If we can prevent one person from dying from suicide, then the program in my opinion will be well worth it,” Peters said.

ALPRs certainly have critics, most notably the American Civil Liberties Union (ACLU). In a September 2021 letter to the Cranston City Council, the ACLU expressed “deep concerns” about the police department’s “surreptitious installation” of ALPRs in that city.

The ACLU claimed the cameras capture more than just license plate numbers, allowing police information about the vehicle’s make, color, type, bumper stickers, and other details. The use of such cameras will no doubt expand over time “to engage in more, and more intrusive, types of surveillance,” the ACLU added.

Peters included the ACLU letter on his agenda item in the interests of transparency, but also included a written police policy that answers the organization’s concerns point by point.

While the ALPRs do take “pictures of critical details of the rear of vehicles” and can also be used to identify vehicles involved in crimes, “our main goal is to aid in suicide prevention,” said Peters, adding that the fixed cameras cannot be swiveled by remote control. If he wanted to use such cameras for crime prevention, Peters said he would have instead asked they be installed on East and West Main roads.

The chief also said the camera captures would be solely owned by the Town of Portsmouth and never be sold to anyone. Data would be deleted after 30 days and would not be recoverable, he said.

Council member Daniela Abbott, the sole member to vote against the pilot program, said it all seemed “a little big brothery.” She also opposed an automated speed camera-enforcement system on local roads when it came up for council approval in February. (The council voted 4-3 at that meeting against a resolution to support state legislation to allow such cameras.)

“There’s no way I can support this, even if it’s for a year. I appreciate the intention; I just don’t agree with the means in this case,” said Abbott. She also expressed skepticism that the Town of Chepachet, one of six other Rhode Island municipalities considering ALPRs, would be using them for suicide prevention.

Local resident Larry Fitzmorris, president of the watchdog group Portsmouth Concerned Citizens (PCC), also pushed back on the proposal, saying the ACLU letter “makes a strong case against the use of these systems,” and that citizens need “absolute assurances that this date is deleted.”

Laura Ann Holland, a representative from Flock Safety, testified via Zoom that her company is sensitive to privacy concerns. “We are really dedicated to protecting civil liberties while balancing law enforcement needs,” Holland said.

To that, Fitzmorris responded, “I’ve spent some time in the intelligence community; nobody’s data is secure. This stuff shouldn’t be ending up in China on the web.”

Despite his objections, Fitzmorris said PCC would be willing to support the pilot program for one year as long as it’s later codified into an ordinance, with any changes coming before the Town Council for approval. “We look to the council to guard our privacy in these matters,” he said.

“We are not planning to watch every car that’s going over the Mt. Hope Bridge,” Patton testified via Zoom, adding the program is “extremely valuable” for Portsmouth, Bristol, as well as Newport County in general.

“It could save someone who’s headed to the bridge with the intent to end their life,” he said.

The council voted 5-1, with Abbott voting in the minority, to allow Peters to collaborate with the Bristol Police Department on the one-year pilot program, which begins on the date the cameras are installed. The motion also stipulated that any changes to police policy on the use of the ALPRs must first be brought to the council for consideration.