Sunday, June 13, was a beautiful bluebird day for a car show and over 50 antique cars came to support a food drive organized by the Little Compton Republican Town … 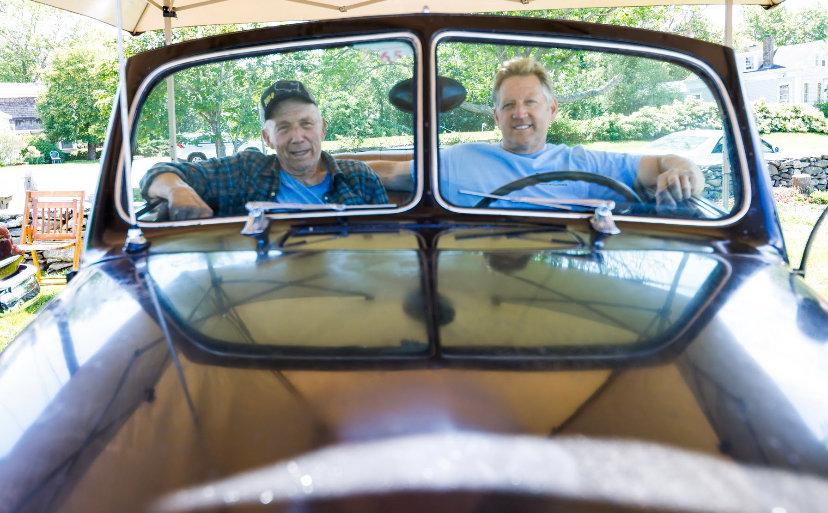 The event was a huge success collecting two car loads of food items!

While the show accomplished its food collection objective, it also illustrated how one family, after decades of effort, has established Little Compton as the premier antique car zip code in the state of RI.

Old cars are not complicated.  They are not digital and many don’t even have radios.  They remind us of simpler times when life was innocent and less anxious.  In short, old cars make us feel good and put smiles on our faces.

This old car show also placed on display a long - held secret about Little Compton and old cars.  Old cars and Little Compton go together and go back a long way.  This is not an accident.  This happened because of Henry Helger and his life-long love for antique cars.  He is probably the best known and most highly respected antique car dealer in the state. Henry understood something special about our town a longtime ago.  Little Compton roads with their beautiful views offer ideal vistas for enjoying a ride in an old car.  If the Indianapolis 500 is famous for high caliber racing cars, Little Compton is well known for its slower speed limits and magnificent seaside vistas, which heighten the experience of owning or watching an old car amble down West Main Road.

Most of Sunday’s cars were from Little Compton.  They were all assembled on Veteran’s Field in the Commons.  This field, with its iconic New England stone walls, formed a Norman Rockwell picture frame for the ages.  Like a snapshot of a flower garden, each old car was positioned like a bush or a rose to create a well - manicured display of feel-good memories.  It was a joy to witness the happy crowds ambling around the show admiring the old beauties.

Under a protective sun tent in a 1936 Ford, Henry, his wife Sally, his son Ray and his two twin grandsons Cody and Jesse quietly welcomed anyone who walked by and thanked them for coming to the fundraiser.

They say that it’s the quiet little things in life that make a difference.  If you don’t know where Henry’s shop is, you will have difficulty finding it.  Hidden subtleties, like rare spices, often convert ordinary recipes into tasty treats. For decades now, Henry’s love for old cars has played a quiet role in making Little Compton such a feel- good zip code.

Letter: To the angels who helped during my time of need

Letter: Save taxpayer money  by sending Hodgson into retirement