It's back on! BCWA completes Cross Bay Pipeline repair

Project came in on budget and on time, executive director says; next step is new $37 million proejct

Seven months after its Cross Bay Pipeline sprung a leak, Bristol County Water Authority officials flipped a switch at the Port of Providence Friday morning and water once again started flowing through …

It's back on! BCWA completes Cross Bay Pipeline repair

Project came in on budget and on time, executive director says; next step is new $37 million proejct 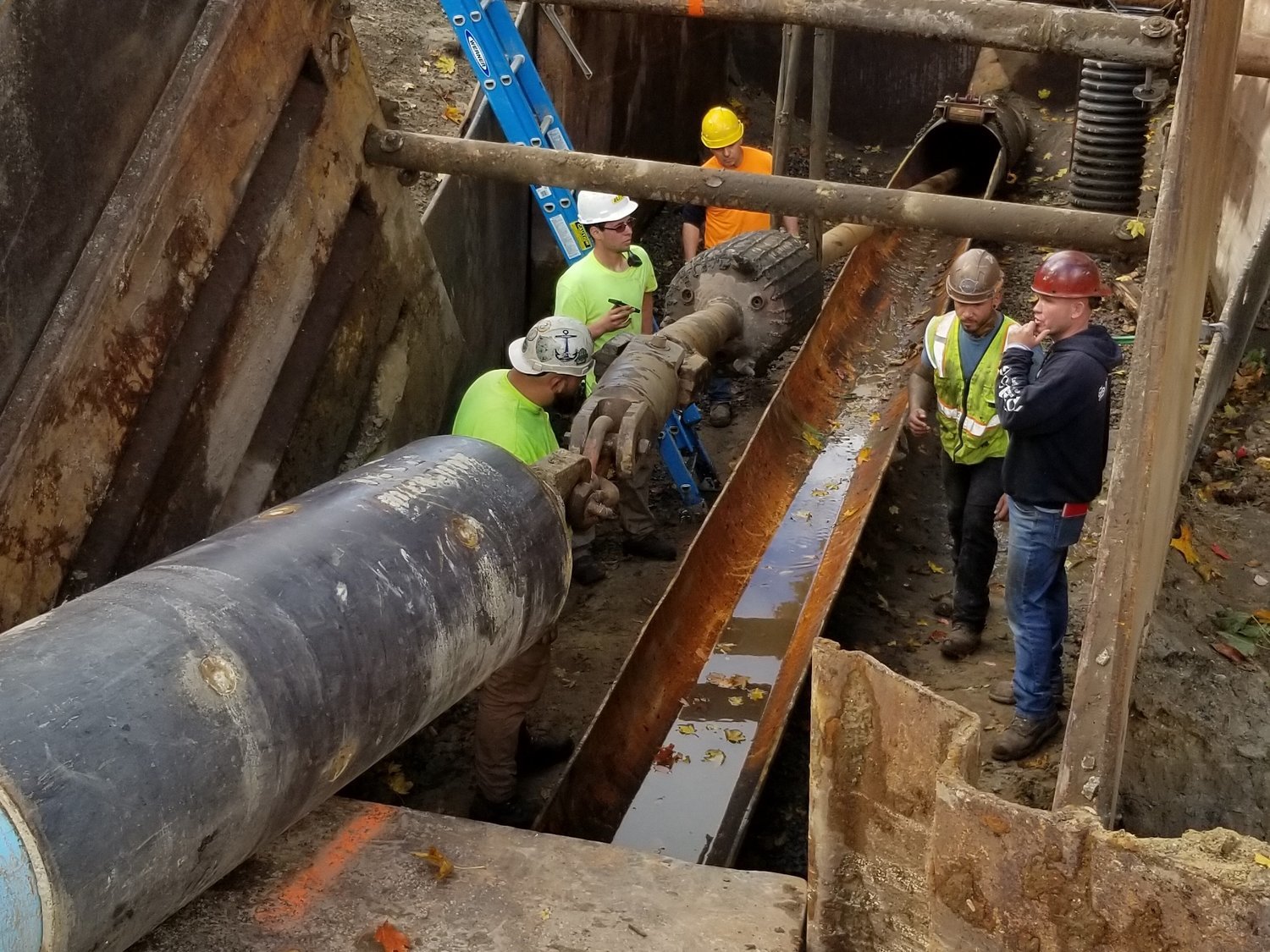 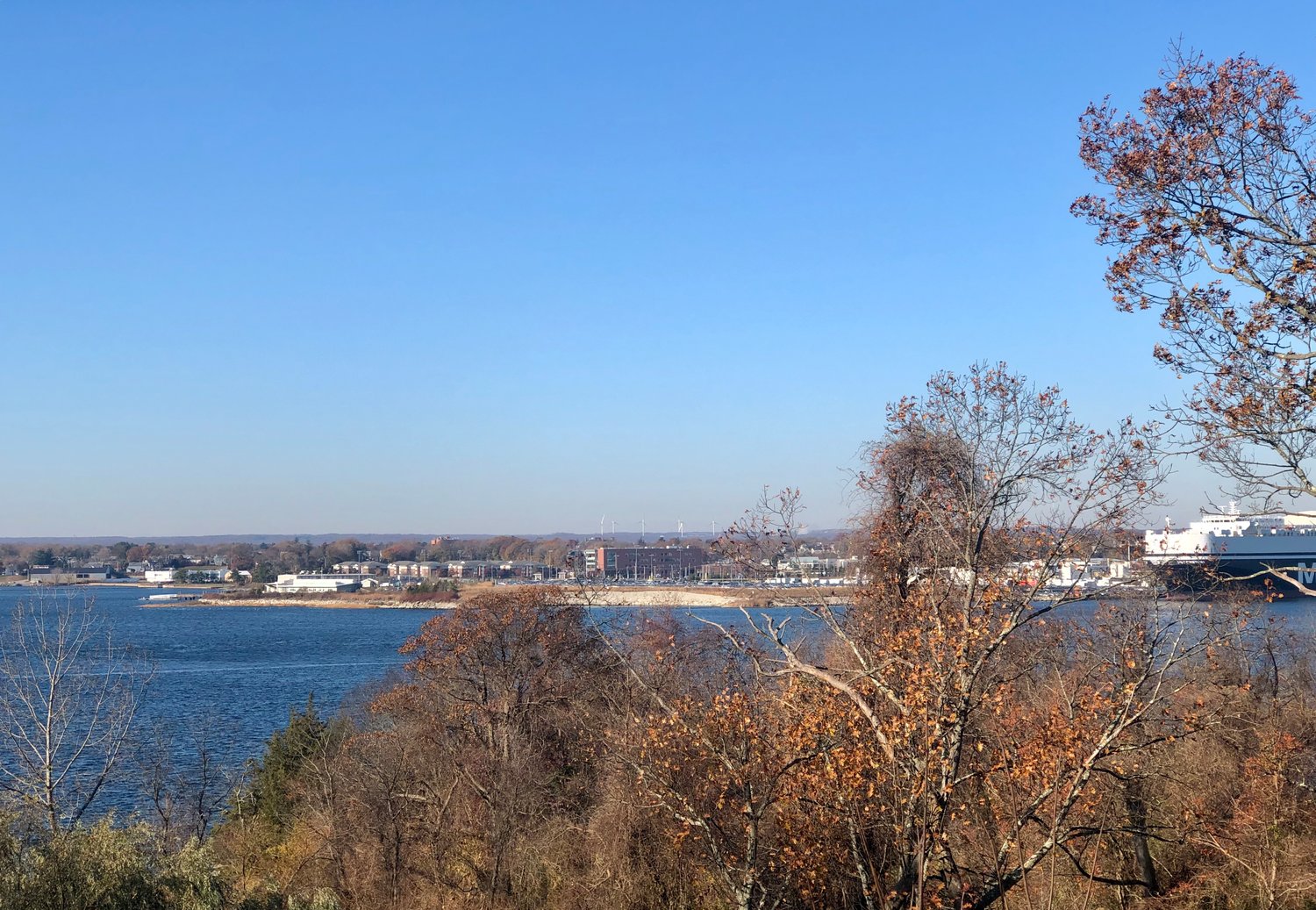 The Cross Bay pipeline stretches almost a mile from the East Providence shore (foreground) under the Providence River and terminates at the Port of Providence.
Ted Hayes
Previous Next
Posted Friday, November 15, 2019 10:50 am
By Ted Hayes

Seven months after its Cross Bay Pipeline sprung a leak, Bristol County Water Authority officials flipped a switch at the Port of Providence Friday morning and water once again started flowing through the once-crippled pipeline, which serves the main water source for Warren, Barrington and Bristol.

The line, which runs 160 feet under the Providence River and terminates at the Port of Providence at one end and the Silver Spring Golf course in East Providence at the other, was built in 1998. It was damaged, BCWA officials speculate, by a small earthquake in early April that caused at least two cracks to form in welds along its length. The leak led to the release of up to 440,000 gallons of water per day and continued unabated through the spring, summer and early fall months.

Officials considered several options for repairing the line before settling on a plan to pull a mile of PVC tubing through it, welding 450-foot sections of pipe together as they pulled. It was the most expensive and risky proposal, but as BCWA Executive Director Pam Marchand said two months ago, it was the only realistic option.

But despite a minor delay in starting the work due to a paperwork issue with the project’s contractor, Biszko of Fall River, no other difficulties were encountered during the two-month project and pressure tests and flushing over the past week showed that everything was in working order.

On Thursday afternoon, BCWA Executive Director Pam Marchand said she was thrilled that the repair came off without a hitch. The work ended up finishing on schedule and on-budget, she said.

“We did anticipate we might get a few hiccups and they never showed up,” she said. “It went more smoothly than we thought” it would.
With the pipeline now back in service, all water bans have been lifted.

The pipeline’s difficulties came as BCWA officials look to start a new project — a roughly $37 million effort to connect Bristol County directly to the City of Pawtucket’s water supply.

The project has been discussed for more than six years, never finding favor at the local or state level. But with the recent leak and realization that Bristol County is as vulnerable to water shortages as it has ever been, the move has to be made, Ms. Marchand said.

"We never thought we'd have a problem with (the Cross Bay Pipeline) for the next 100 years, to tell you the truth," she said at a meeting with town officials earlier this year.

But with the leak and poor quality of the BCWA's other possible sources of water in Massachusetts, as well as the cost to treat and make them potable, "the remedy is to build a pipeline."

When completed, the project would allow the BCWA to switch to Pawtucket's supply for its main source of water, using the now-repaired Cross Bay Pipeline, which connects to the City of Providence water supply, as a backup source.

It would be broken into two phases. The first would cover the construction of a 24-inch interconnecting line from the Cross Bay Pipeline's terminus in East Providence to another pipeline from Providence, which serves as East Providence's main supply and lies further to the north.

That portion, which Ms. Marchand said this week is in the engineering phase and could go out to bid early next year, would cost approximately $6 million.

The second portion, running a 24-inch or 30-inch main from that point all the way to the East Providence/Pawtucket border, would cost another $31 million or more. Officials said the complexity of that portion, which involves running a line that in many places would cut near or under state roads including Pawtucket Avenue in East Providence Other portions of the project, which be complicated and could take several years to begin.

Ms. Marchand said that if no external funding sources are found, the entire cost would be borne by BCWA ratepayers and would likely result in yearly rate increases of 3 to 3.5 percent per year over the 15 to 20-year life of the bonds.

As many of the authority's existing bonds have been paid off, she and board chairman Allan Klepper of Barrington said authority officials have been planning for such an expense under their long-term 20-year budgeting schedule.

"It's within our budget limits to install Phase I," she said.

As for the larger section of line accounting for Phase II, 50 percent of that cost has also been accounted for in long-term planning and would come from rate increases, "with the assumption that somewhere along the line, East Providence is going to join us with the project."

For years, East Providence officials resisted contributing to the project. But Ms. Marchand said negotiations are ongoing and, this summer, she said she is hopeful that a sharing of costs will happen.

As they look to ratepayers and East Providence, Ms. Marchand said authority officials are also looking elsewhere for ways to help cover the project's cost.

When first envisioned, estimates were that the pipeline would cost roughly $22 to $27 million. In the early days, BCWA officials hoped to have it paid for largely with bonds and funds from the state. But approval for a bond issue on the statewide ballot never made it through the legislature and there has never been the will to discuss another one.

That has changed, she said, and she said BCWA officials want the state to approve a new, $50 million statewide water infrastructure issue on next year's ballot.

"We're not the only water supply with problems," she said, and she hopes that a statewide issue will have more success passing. She asked legislators on hand Monday night to support the proposal.