In Portsmouth: Building a path toward climate resiliency

Portsmouth Park, Prudence Island and a shelter on the draft list for capital projects

PORTSMOUTH — The town isn’t waiting around for Park Avenue to go under water permanently.

Working proactively in an attempt to stem the tide of climate change, the town and the …

In Portsmouth: Building a path toward climate resiliency

Portsmouth Park, Prudence Island and a shelter on the draft list for capital projects 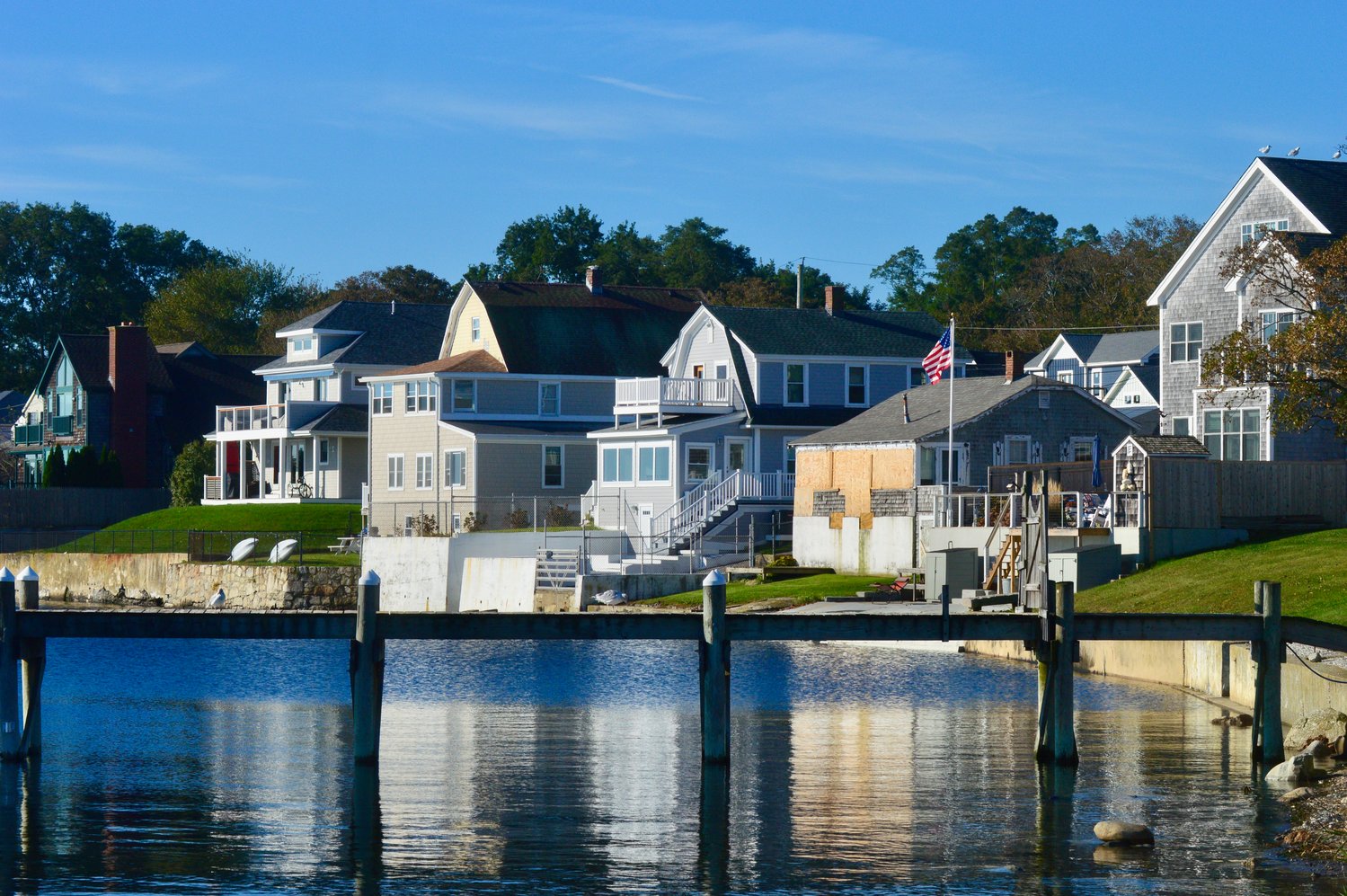 Replacing the stormwater system in Portsmouth Park — Aquidneck and Narragansett avenues — is considered the No. 1 priority on a draft list of local resilience capital infrastructure improvement projects.
JIM MCGAW 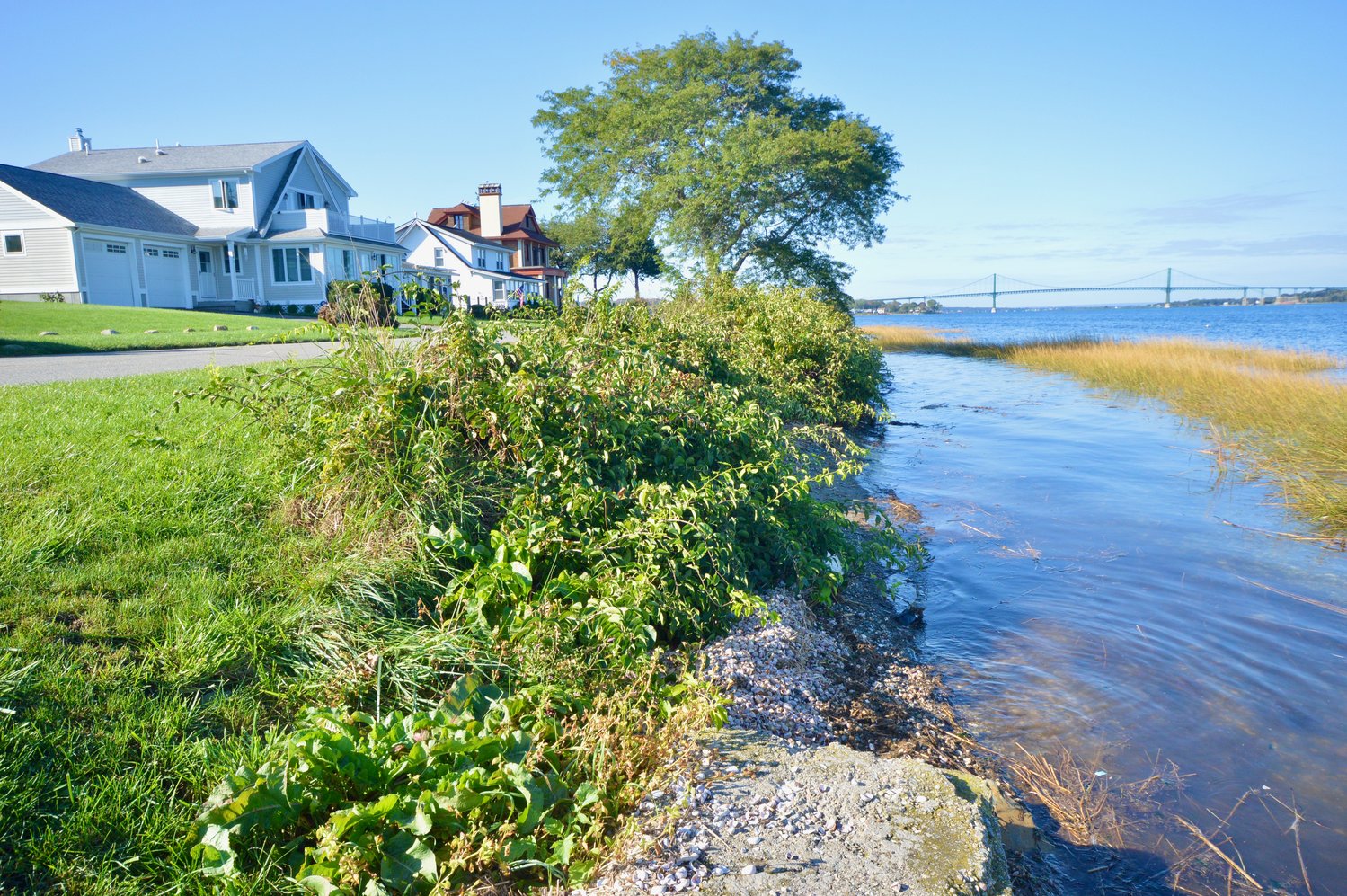 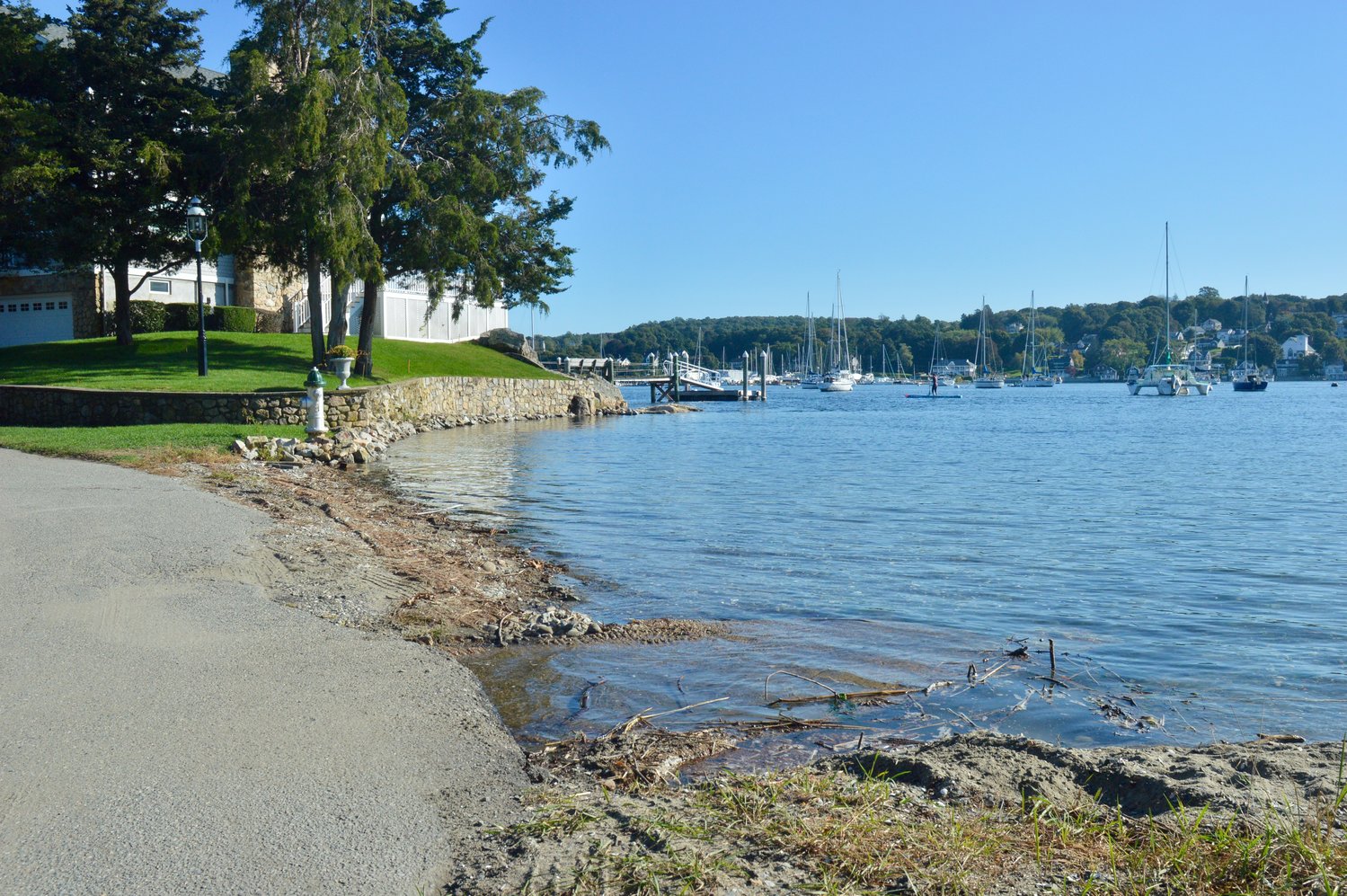 The “king tide” last week completely covered the beach at the south end of Cliff Avenue, with the water from the Sakonnet River nearly making it onto the road.
JIM MCGAW
Previous Next
Posted Thursday, October 14, 2021 8:01 am
Retreat from rising sea, or raise buildings?

The Aquidneck Island Climate Caucus, led by Rep. Terri Cortvriend and Rep. Lauren H. Carson, will host an online forum on Sunday, Oct. 17, titled “Sea Rise is Here: Retreat from the Sea or Raise Our Homes?”

The free event, scheduled from 6:30-8:30 p.m., will feature Mark Thompson, executive director of the Newport Restoration Foundation, who will discuss his organization’s extensive experience preparing historic homes in Newport for sea rise and flooding; Warren Planning Director Bob Rulli, who will share his town’s plans for retreating from the shore, safety and housing; and Neil Hingorany, principal of Narragansett Engineering Inc., who will discuss current policy for building in the flood plain.

Pre-registration, available at shorturl.at/rvIMU, is required to receive a link to the meeting, which be conducted on Zoom.

Global sea level has been rising over the past century, and the rate has increased in recent decades. In 2014, global sea level was 2.6 inches above the 1993 average — the highest annual average in the satellite record (1993-present). Sea level continues to rise at a rate of about one-eighth of an inch per year.

How is this affecting our lives on Aquidneck Island? What are the policy options for preparing for sea rise? The forum will be an opportunity to discuss these questions with local experts in the field.

“In the Ocean State and especially on Aquidneck Island, our coastal areas hold some of our richest history. People have always wanted and needed to be near the shore. Unfortunately, that means the rising seas are putting some of our most historic places a greater risk every year,” said Rep. Cortvriend (D-Dist. 72, Portsmouth, Middletown).

PORTSMOUTH — The town isn’t waiting around for Park Avenue to go under water permanently.

Working proactively in an attempt to stem the tide of climate change, the town and the Southeast New England Program Network (SNEP) hosted a public workhop last week to engage the community in the development of a local climate resilience planning and financing strategy.

SNEP brings together 16 partner entities including local environmental organizations, academic institutions, regional planners, and consultants who work collaboratively to provide municipalities and organizations access to free training and technical assistance to advance stormwater management and ecological restoration goals across the region. The Town of Portsmouth submitted a plan to SNEP to develop such a plan, which was approved in May 2020. Around the same time, the Portsmouth Climate Resiliency Work Group was formed and had about 27 members.

Town Planner Gary Crosby, who arranged the workshop at Town Hall, said the resiliency planning efforts are not part of the town’s budget process. “This is a planning process; this list is not committing funds,” he said.

Pam Rubinoff of R.I. Sea Grant at the University of Rhode Island, which has already been involved in several local neighborhood resiliency planning efforts, said it’s important for residents to talk about the impacts of climate change they’re already seeing here.

“Temperatures are rising — both air temperature and water temperature,” she said. “Sea levels are rising at an accelerated pace. Precipitation has been getting more intense and we’re having more of it. We’re seeing different types of storms coming. In the fall season, we don’t see the leaves turning as fast as we once did.”

• Sea level has increased 11 inches in Newport over the past 100 years, and it’s rising at an accelerated rate.

• Even if the earth follows a low greenhouse gas pathway, the sea level in Rhode Island will likely rise at least 1.5 feet above 2000 levels by 2100.

• Climate change has led to more storms, with higher intensity, than ever before. “We’re seeing about 70 percent increased rainfall over the past five decades here in Rhode Island,” she said.

One doesn’t have to look far for a local example of the latter. Joanne Throwe, of Throwe Enviornmental, displayed a photo of the Fairview Lane collapse from early September, following 8.5 inches of rain that was dumped on Portsmouth in 24 hours.

“This makes our point for us,” she said.

Fortunately, said Rubinoff, both the town and the state are not starting from scratch in battling the impacts of climate change. Portsmouth is among 20 communities that have completed resiliency plans, “which opens the pipeline” for state and federal funding, she said. The town already received two grants last year — one for improvements to a dam at Melville, and one for the entrance to Common Fence Point, which has flooded many times over the years after storms or heavy rains.

The town also has a 2018 Hazard Mitigation Plan Update — it sets forth guidelines of short-term and long-term actions to reduce the loss of life or property from hazardous events such as hurricanes, nor’easters, ice storms, snow storms, flooding, and high wind — and has been involved in smaller programs such as stormwater management efforts at Melville School and in Common Fence Point, she said.

Much more work needs to be done, however. With that in mind, Kyle Gray of Throwe Environmental presented a draft prioritized list of nine capital projects which address resiliency, and are also suitable for financing.

No. 1 on the list is replacing the stormwater system in the Portsmouth Park neighborhood (Aquidneck and Narragansett avenues). “This is where we see one of the highest areas of vulnerability,” Gray said, noting it’s considered a long-term project of more than five years.

Another high-priority item is getting a second generator for the pump station on Prudence Island, considered a medium-term (three to five years) project. “That’s critical to the Prudence Island water supply,” Gray said.

The town also needs to repair certain storm drains that were identified in a TV camera scoping project completed over the last few years, he said.

Other items on the list were labeled “medium-high” or “medium” priority: Repairing Landing Lane/Sand Point Dock on Prudence, acquiring equipment for Prudence and Hog Island firefighters, making structural improvements to the high school’s field house for use as a shelter, improving drainage on Riverside Avenue, and providing generators for the transfer stations on Hedly Street and Prudence Island.

In response to a question from the audience, Crosby said the report did not calculate how many residents would benefit from each particular project.

“We did not really do a calculation on how many people would be impacted by a flooding on Riverside Avenue. We just feel that that particular project would effect everyone in Island Park and perhaps town-wide, too,” he said.

Ray Perry, director of Portsmouth Emergency Management, said he’d like to see an emergency operations center (EOC) placed on the list. “With emergency management, I’m looking at how resilient are we in the event of a disaster?” Perry said. “During a disaster, our greatest point of failure as a community is on the response management side. We don’t want to have a false sense of readiness, preparedness and resiliency if we don’t have a response management plan.”

SNEP also presented a spreadsheet of “programmatic items” — assessments, studies, or other operational exercises intended to supplement capital projects, but are not in themselves capital in nature. They were included to support ongoing conversations around future capital resiliency projects in Portsmouth.

Elizabeth Scott, of Elizabeth Scott Consulting, said the process of implementing a resiliency plan is ongoing. Once there is enough input from the town and its residents and there’s a consensus on high-priority capital projects, her company will provide consultant services to the town.

“So it isn’t a guessing game on what these projects will cost. You’ll have a pretty good estimate which you can use in your capital planning,” Scott said, adding that the final step is presenting a climate resilience and financing strategy as well as recommendations for a capital improvement program.

Crosby said public education is most important when it comes to raising awareness of resiliency issues. “It builds public support when budget season rolls around,” he said, adding it also helps the town develop future resiliency projects that might have been missed.