The fall sun slid beneath the trees creating shadows on Vendituoli Field as the Mt. Hope soccer team overpowered Cranston East, 4-1, during a home game on Friday afternoon. The Huskies are currently … 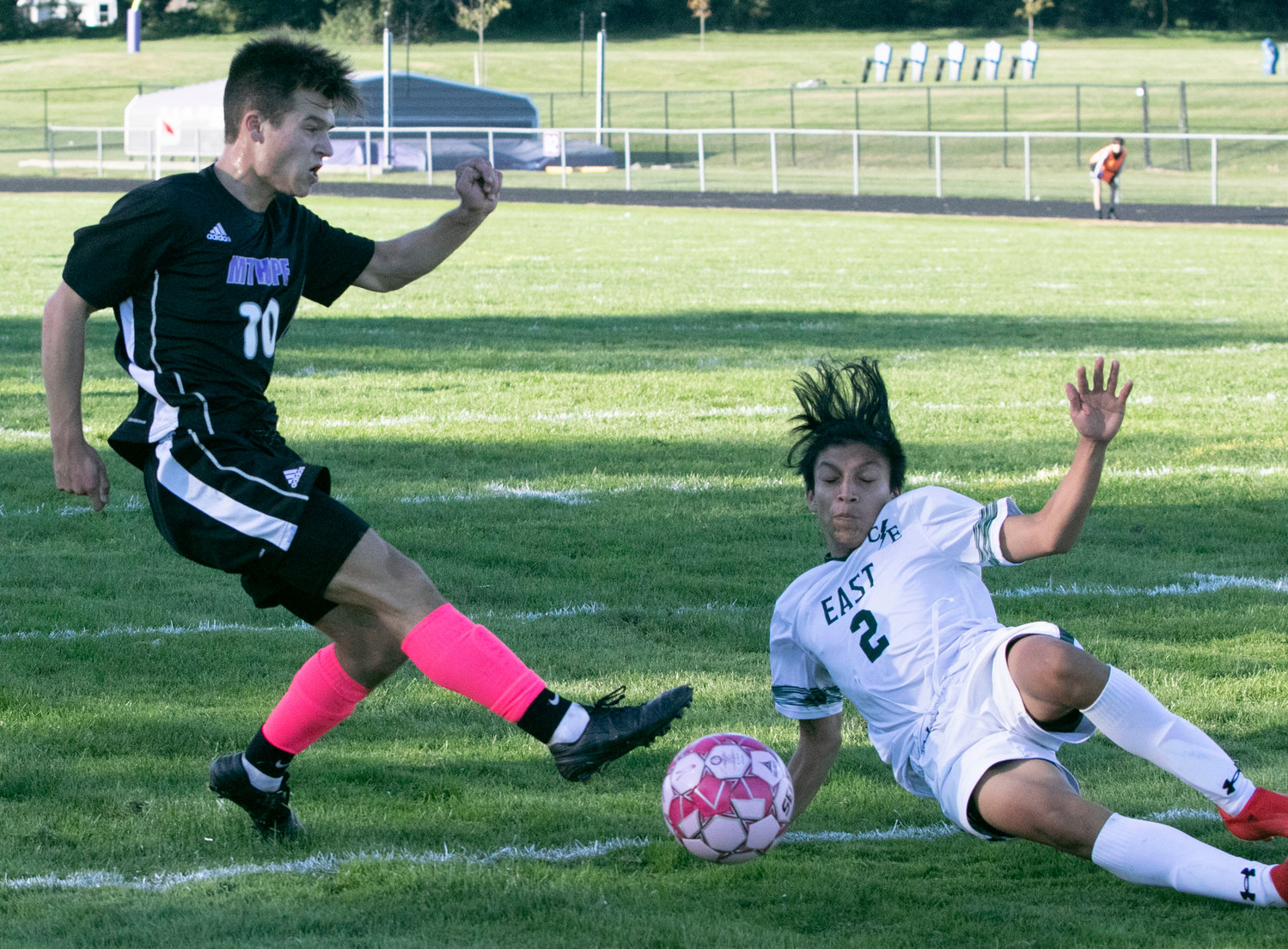 Midfielder, Nick Andreozzi, boots a shot on goal in the first half of the team's game against East on Friday night. Mt. Hope won, 4-1. Andreozzi is sixth in scoring in Division II, with 3 goals and 3 assists for 9 points.
Photos by Richard W. Dionne, Jr. 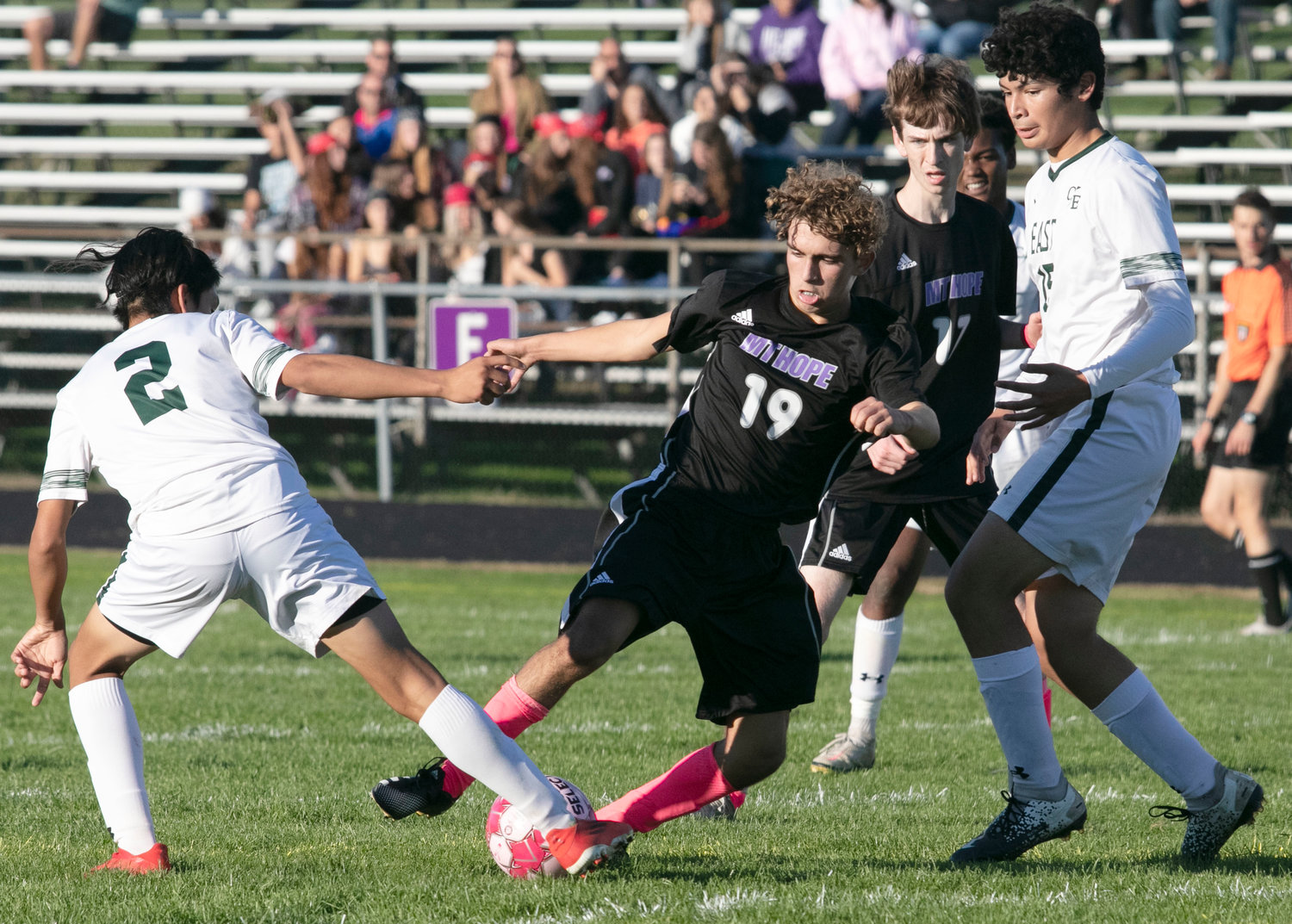 Winger Maddox Canario vies for the ball in the East box, with Dylan Brol looking on. 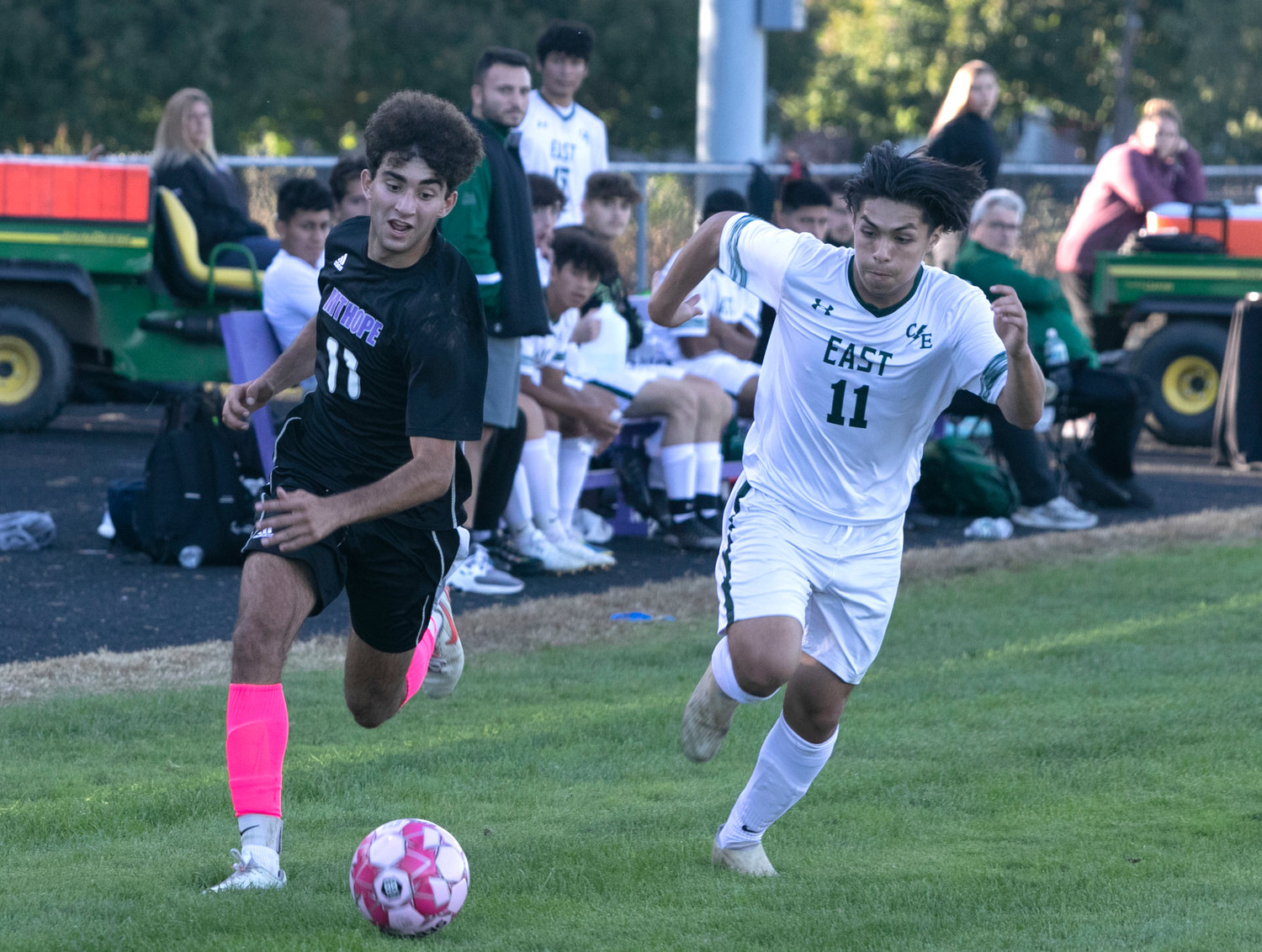 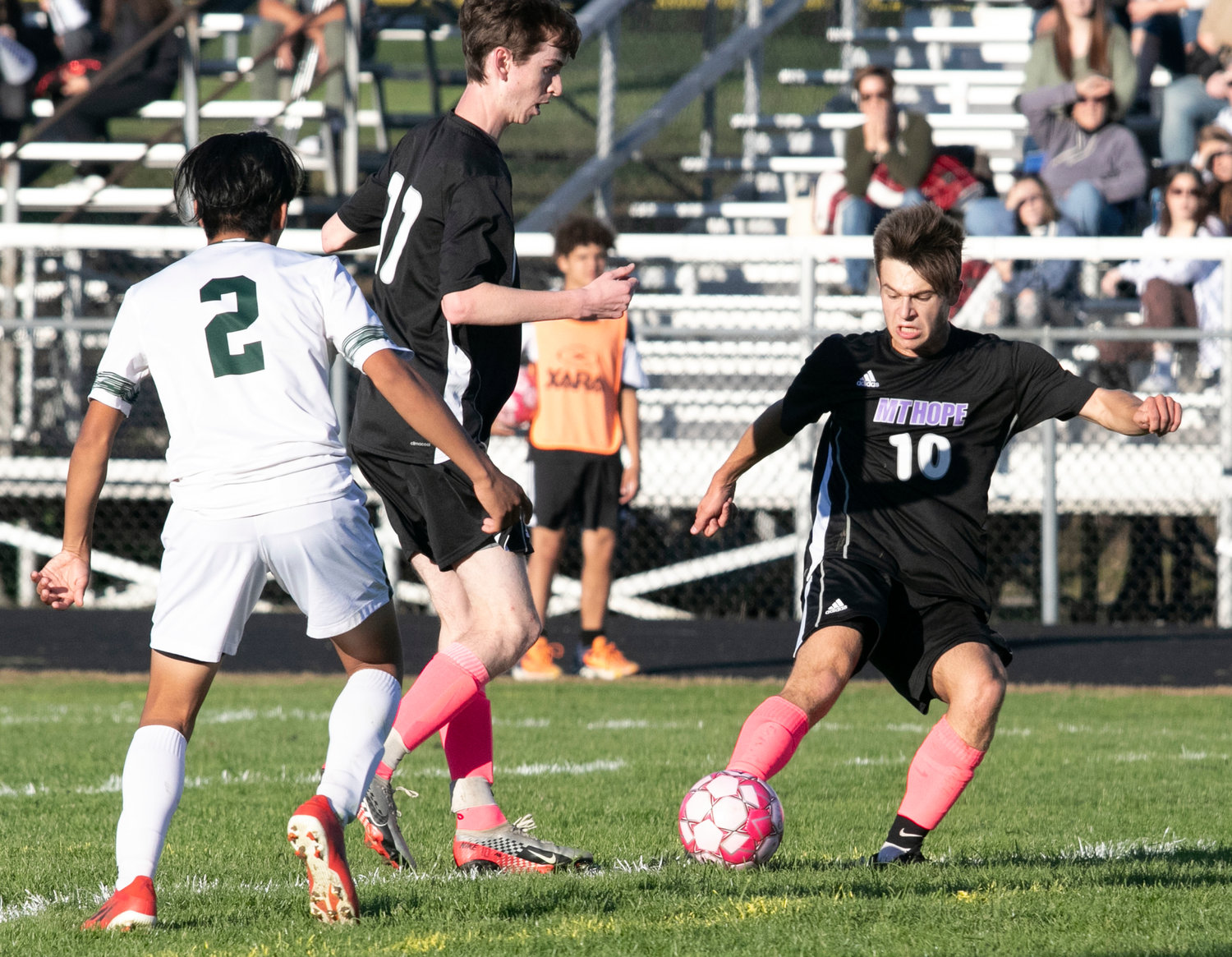 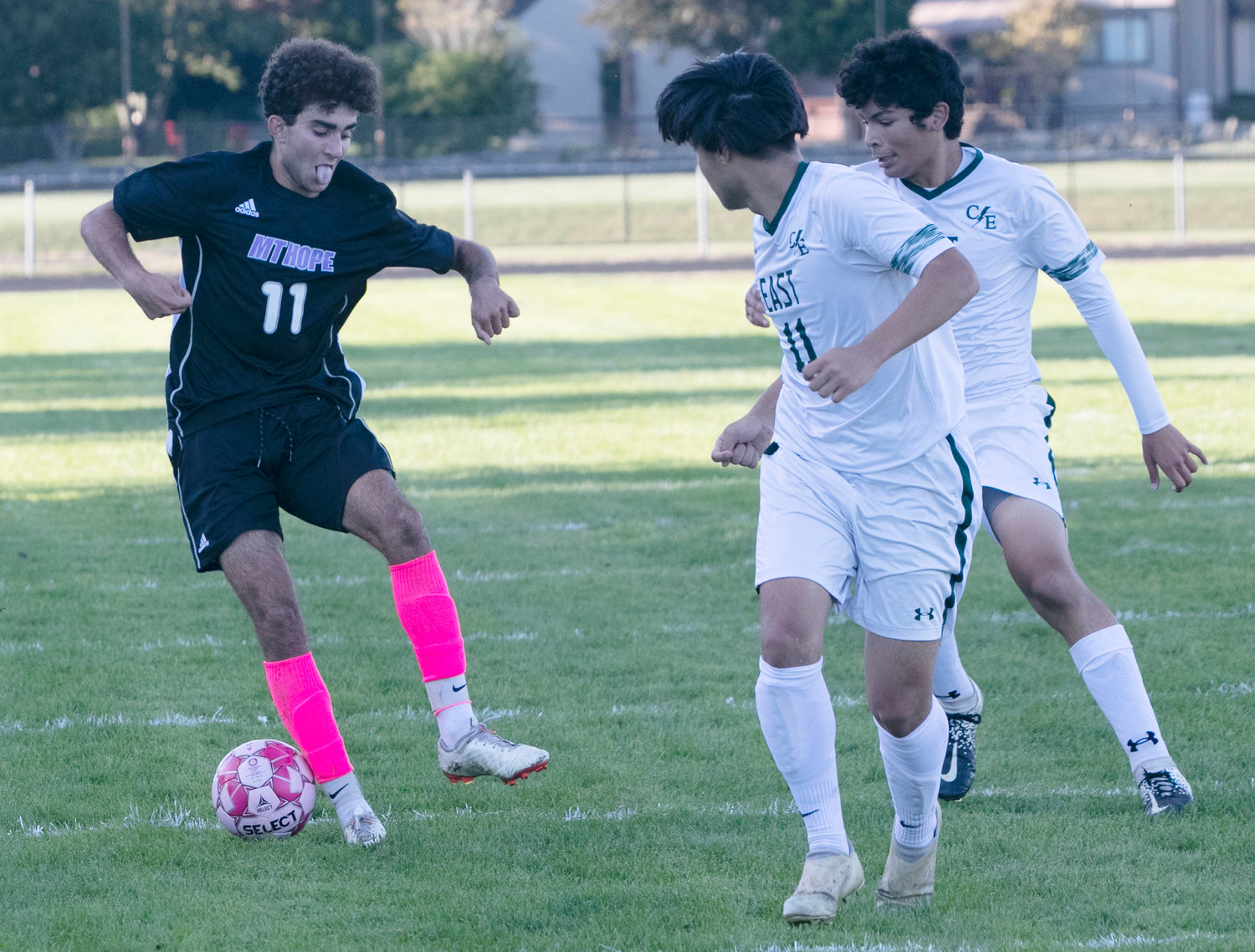 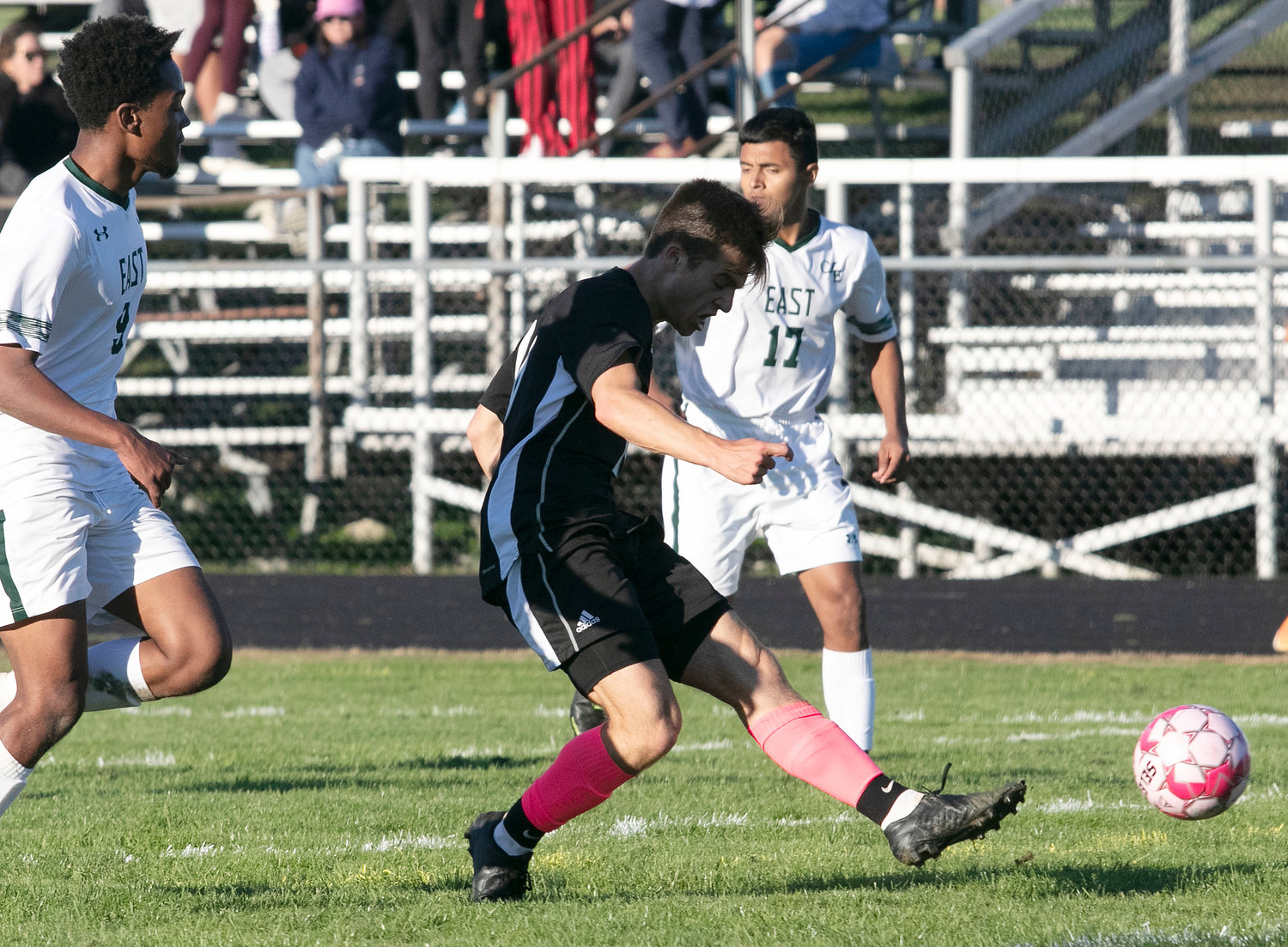 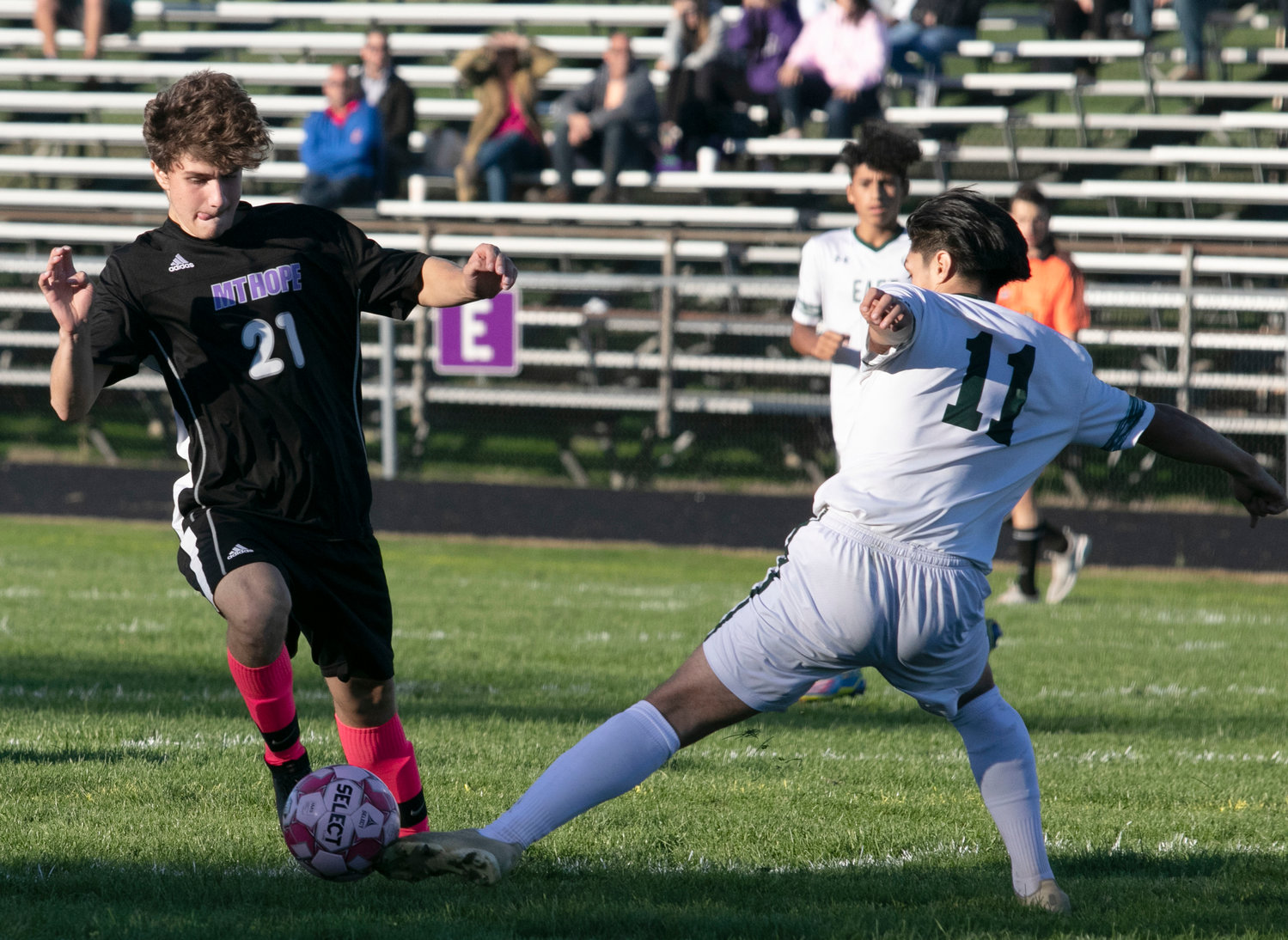 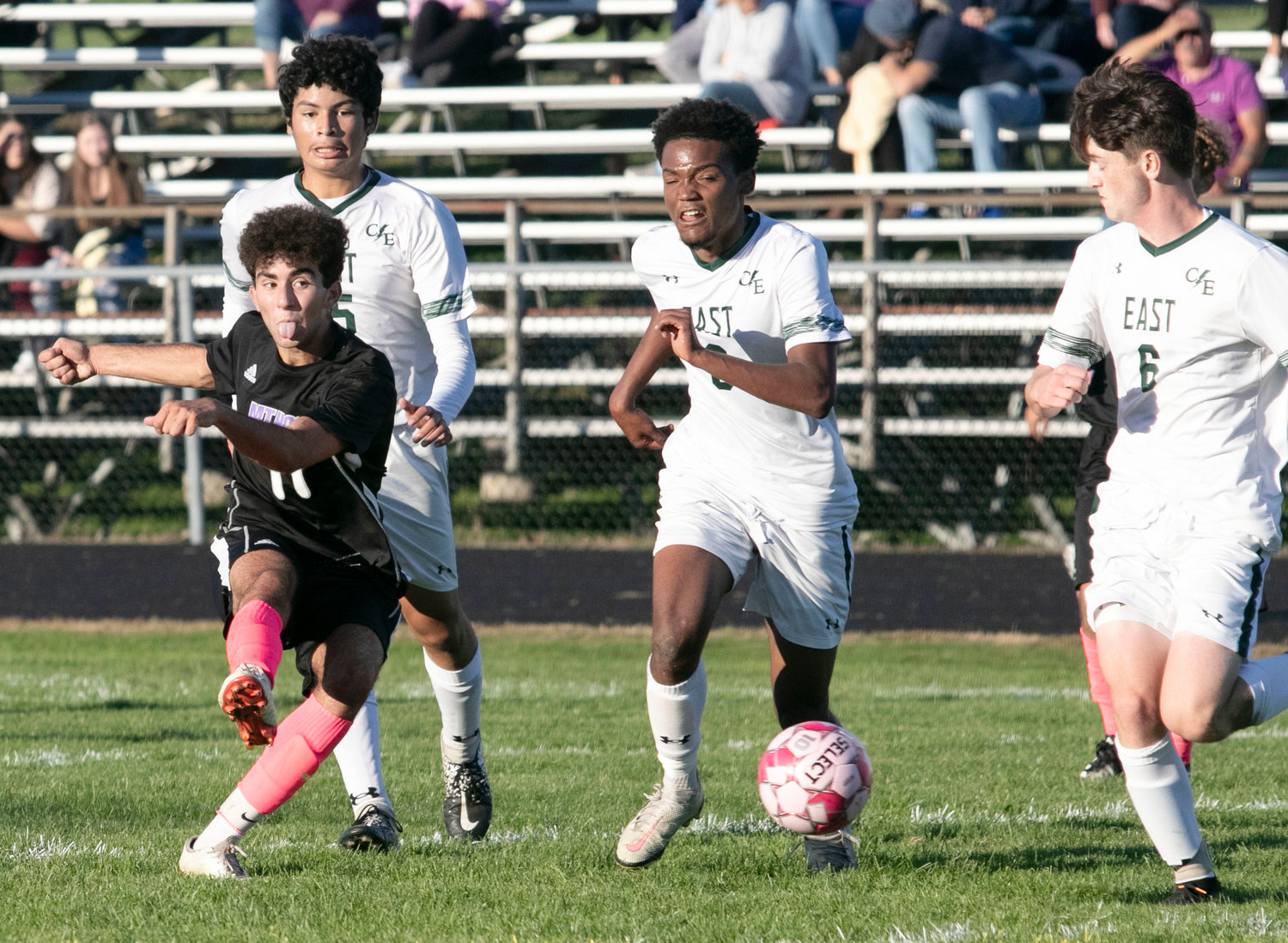 Senior striker Noah Furtado blasts a shot on the Cranston East goal during the Huskies game at Vendituoli Field on Friday night. Furtado is second in Division II in scoring and the team’s scoring leader with 9 goals, 4 assists for 22 points. 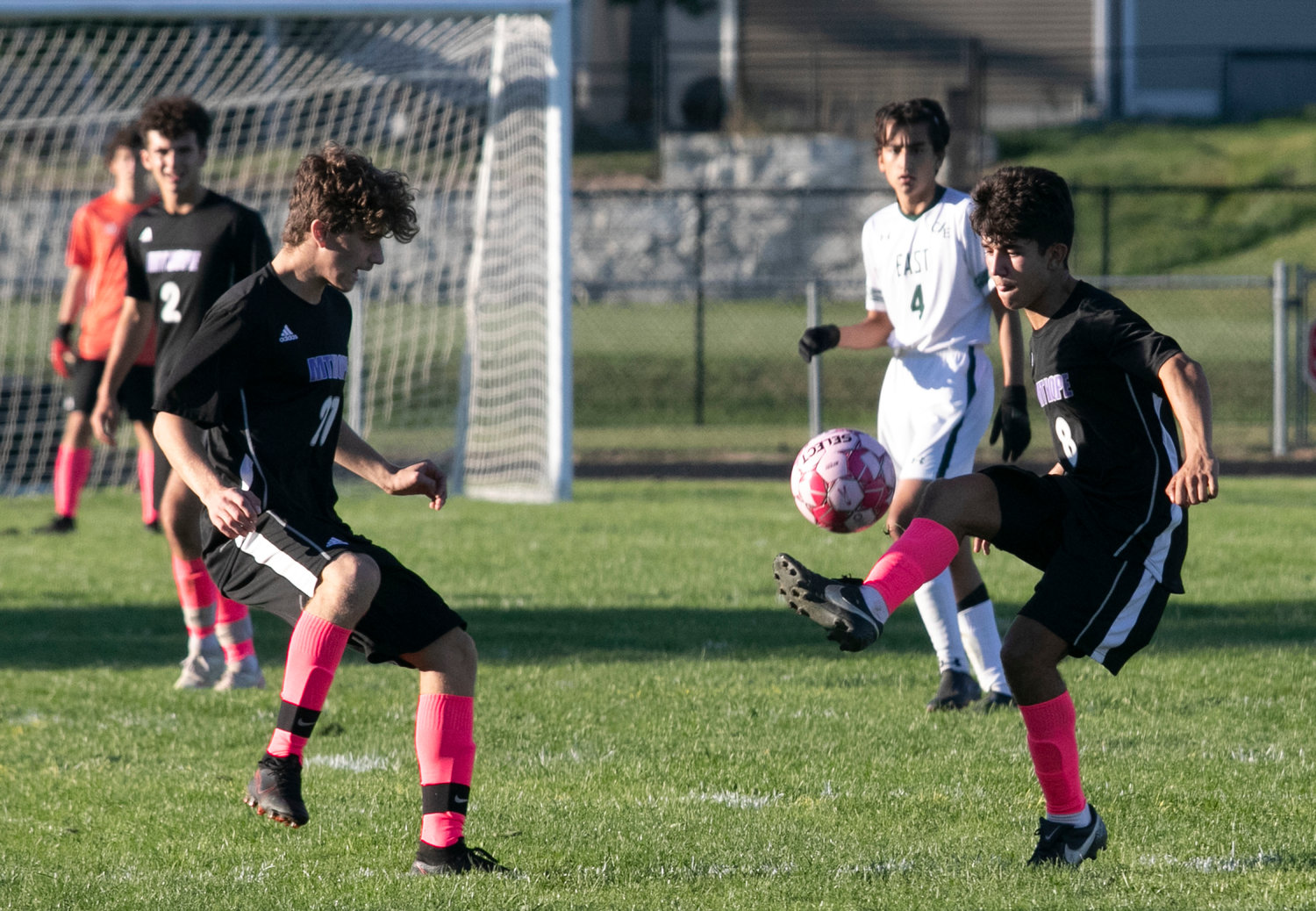 Winger Justin Mendes (left) looks on as midfielder, Chad Parente gets his foot on a pass. 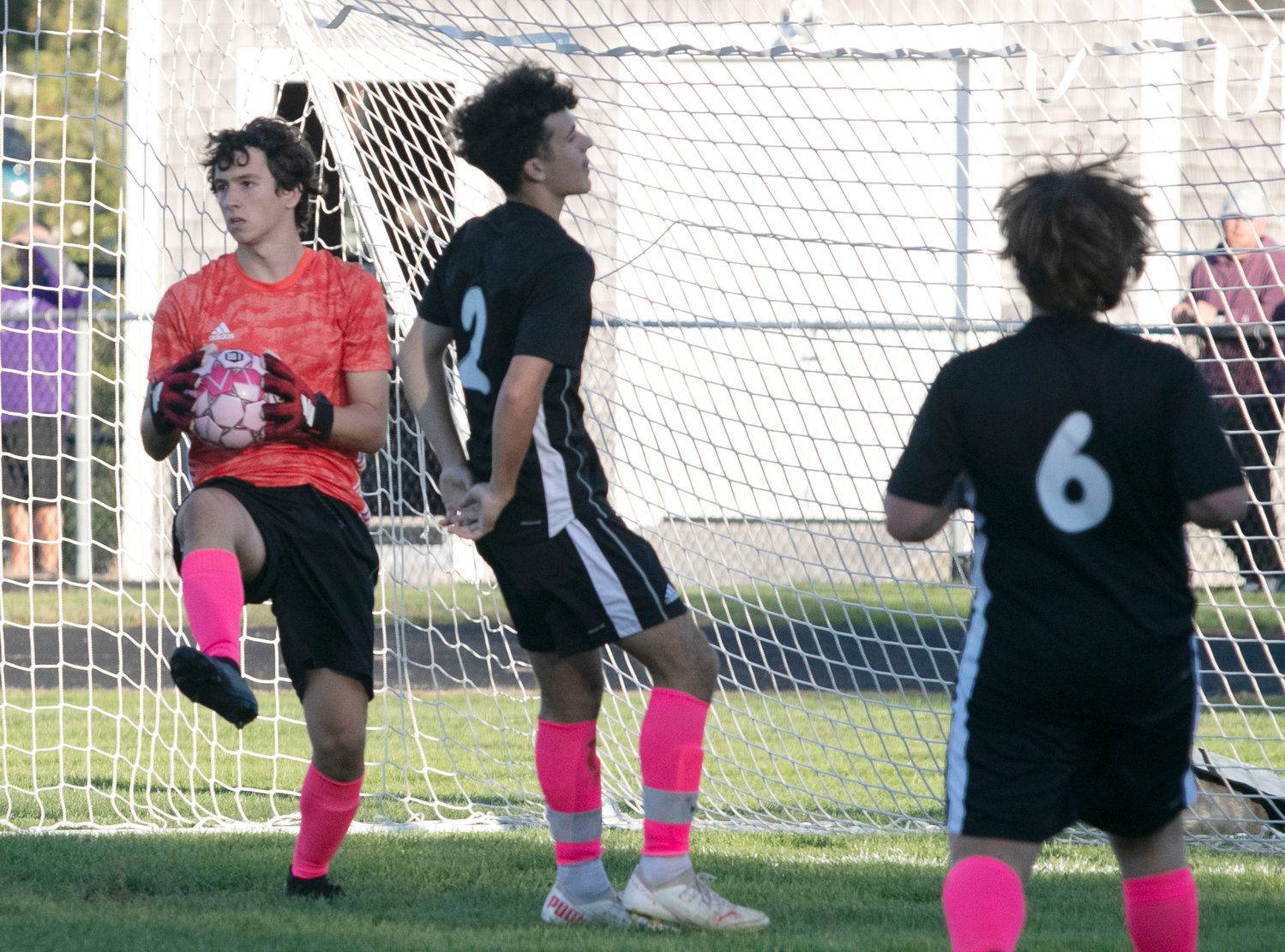 Goalkeeper Matt Terceiro brings down an East shot on goal. 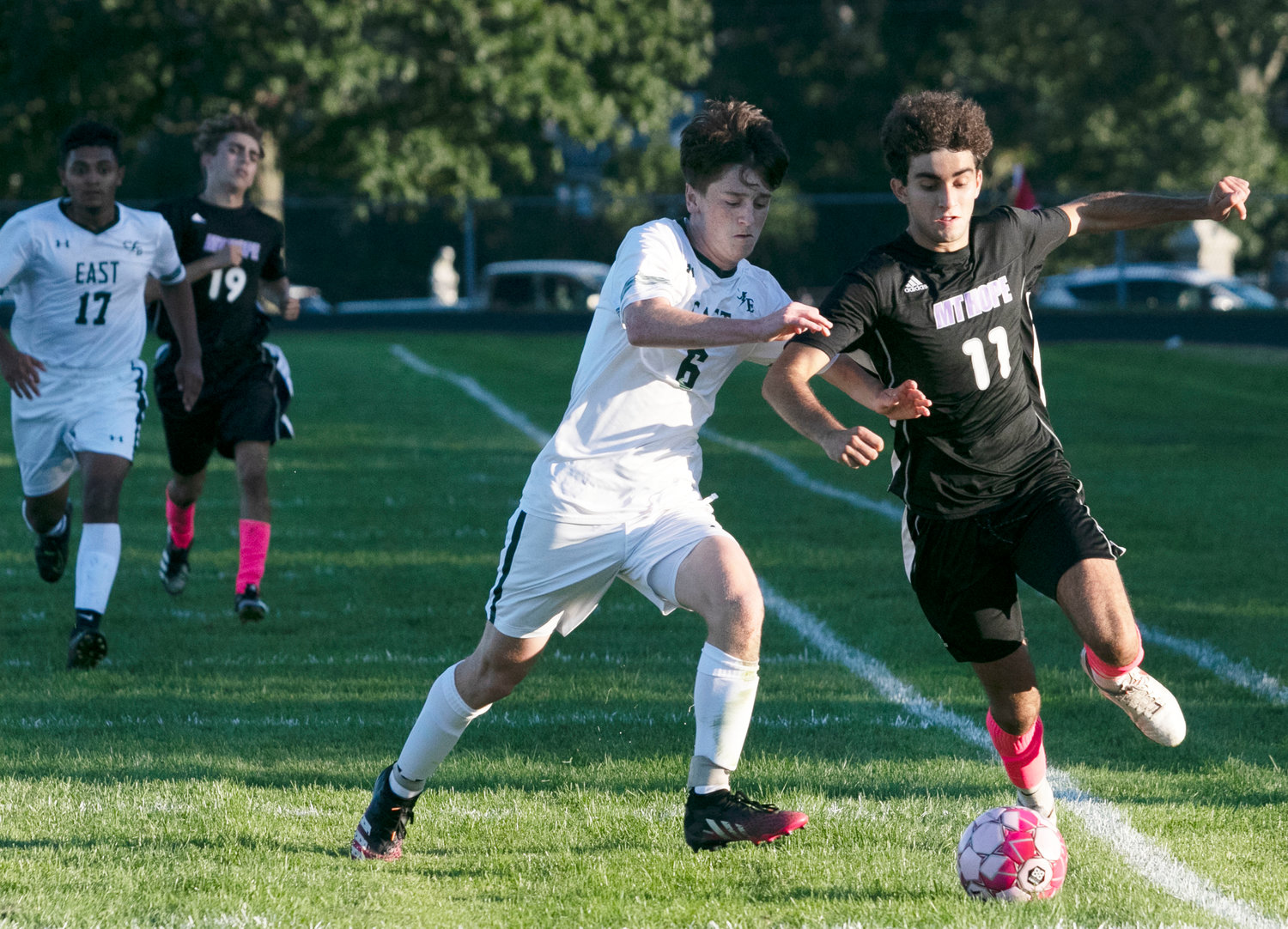 Senior striker Noah Furtado dribbles the ball up the side line during their game against Cranston East at Vendituoli Field on Friday night. Furtado is second in Division II in scoring and the team’s scoring leader with 9 goals, 4 assists for 22 points. 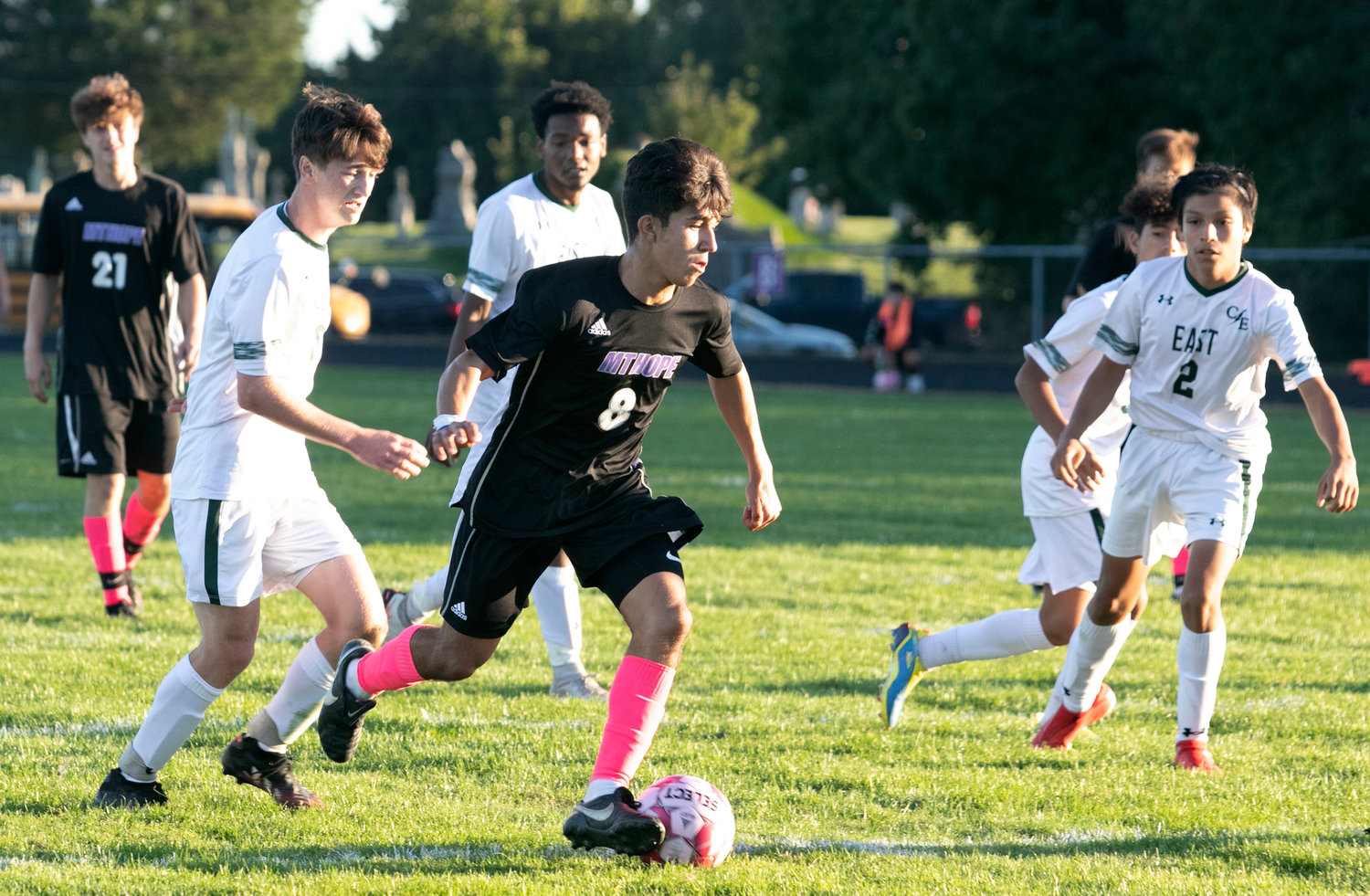 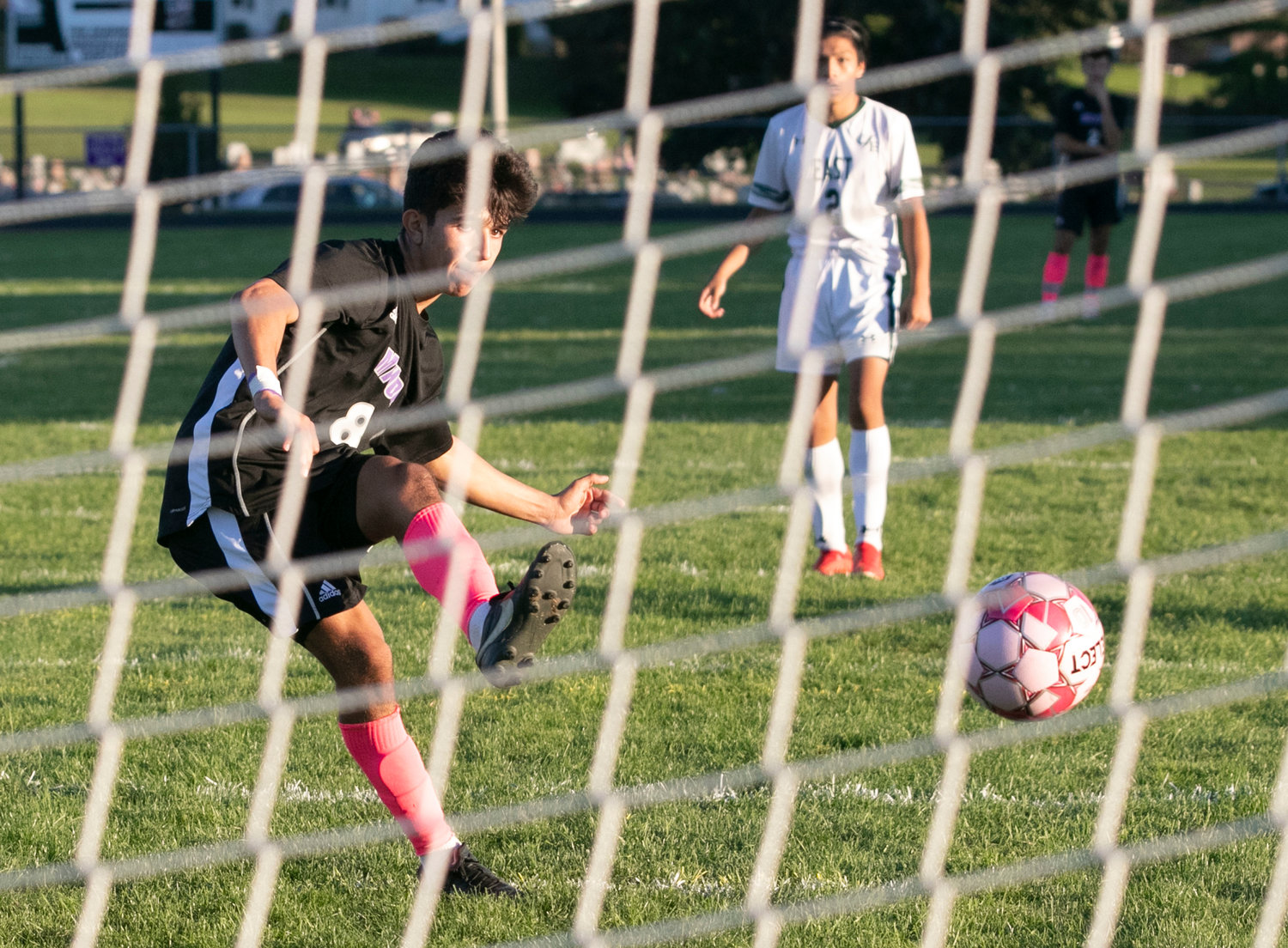 Senior midfielder, Chad Parente, places a penalty shot into the right corner of the net, to score the Huskies fourth goal during Friday’s game against Cranston East. 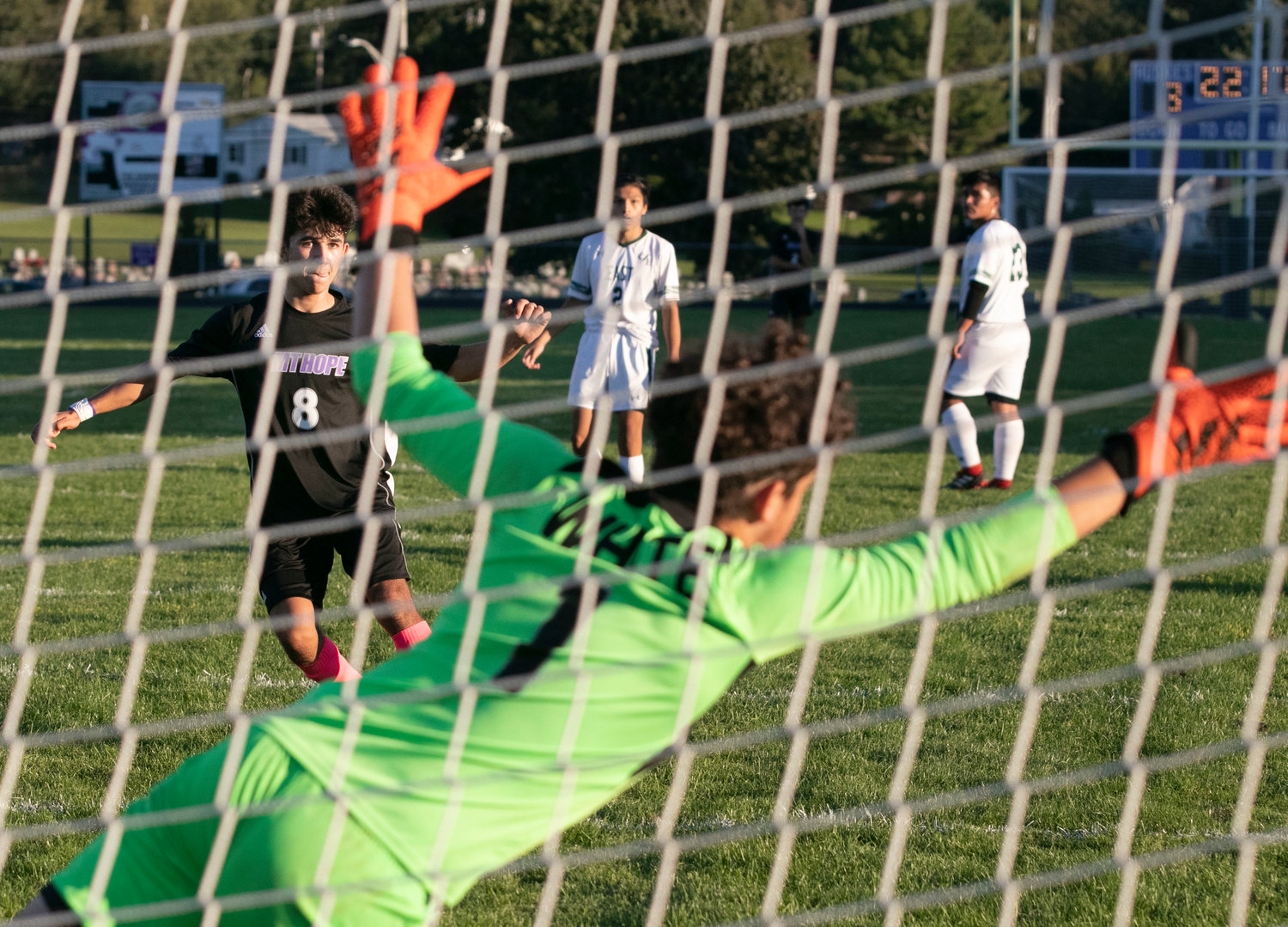 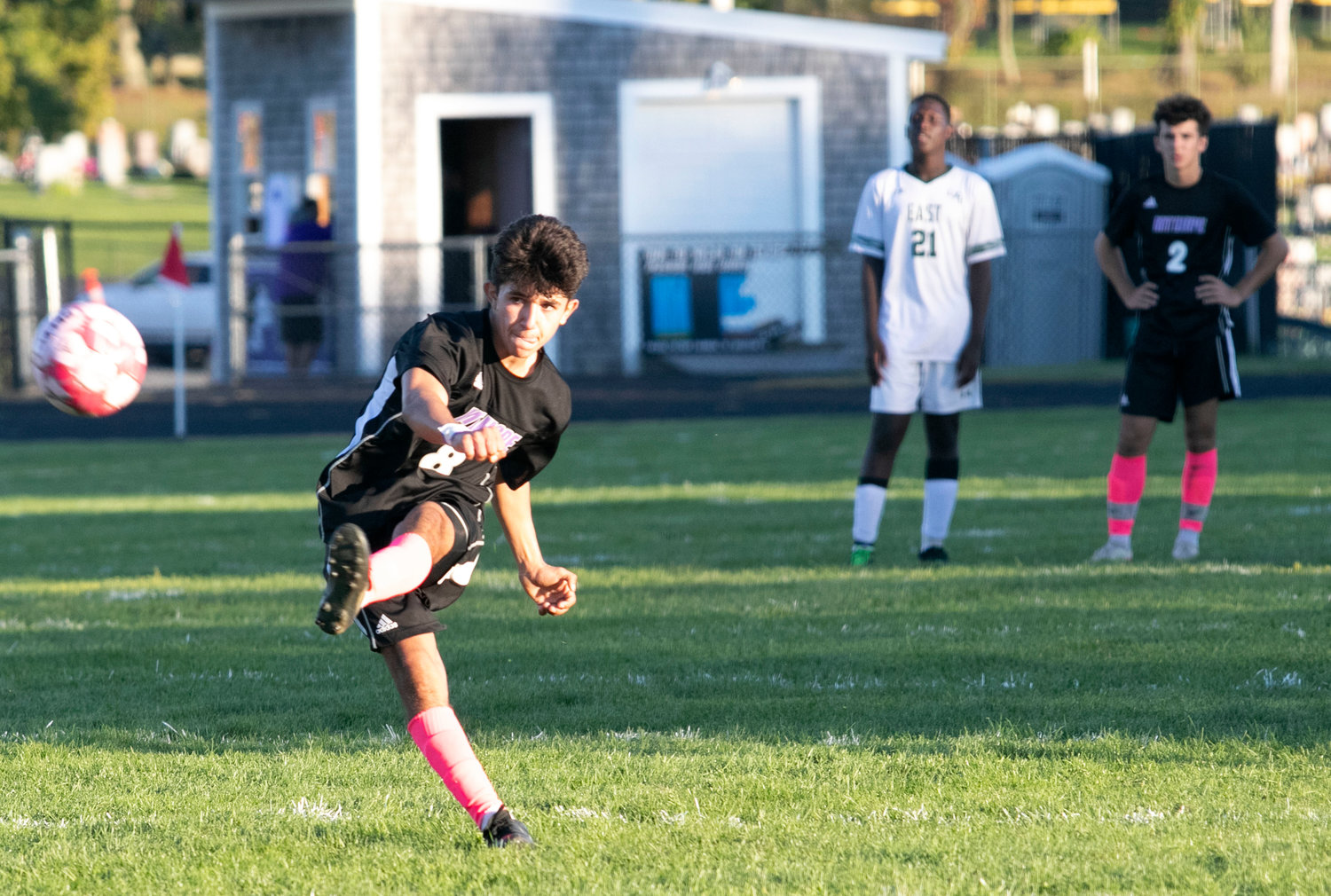 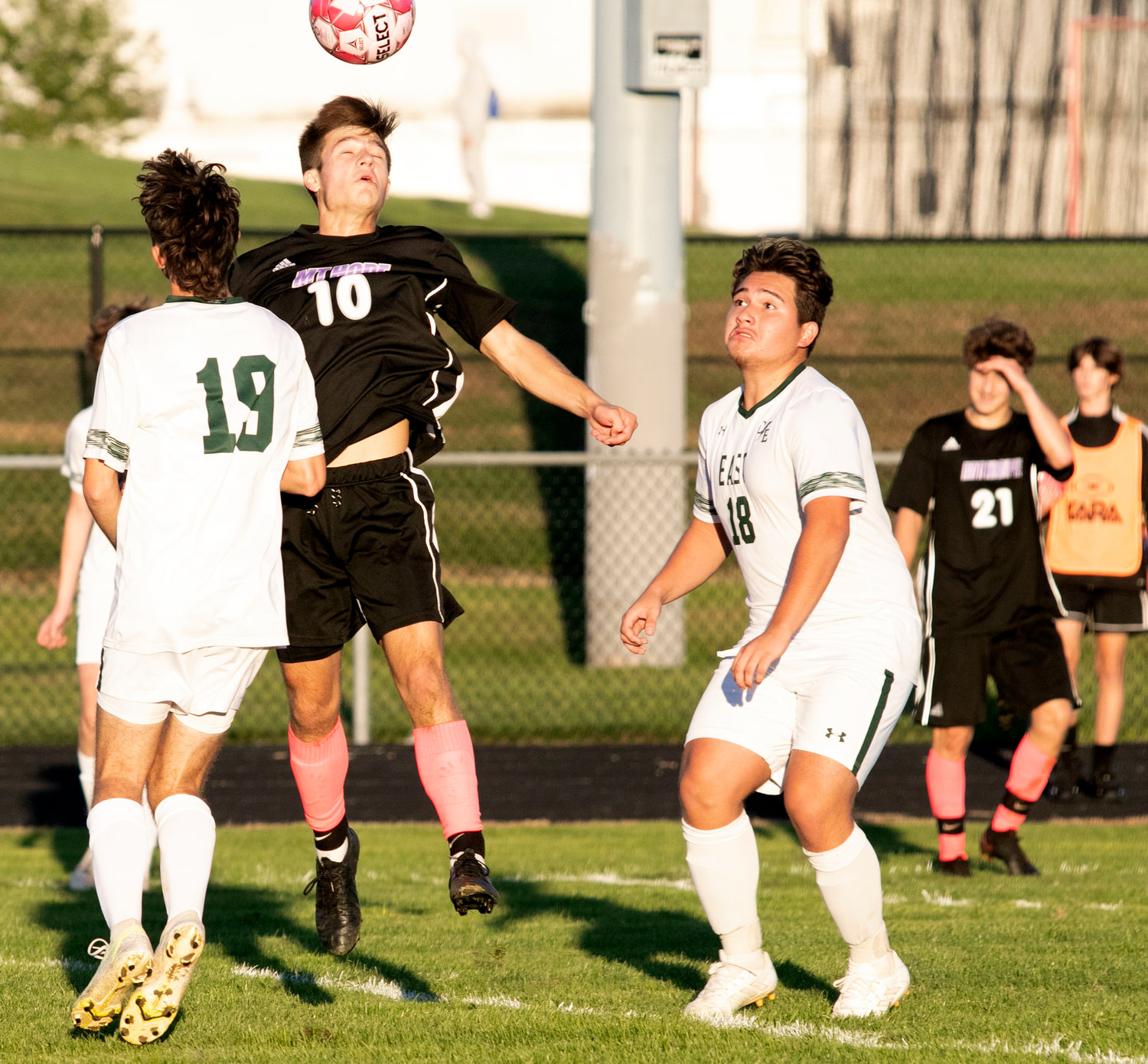 Senior midfielder, Nick Andreozzi, gets his head on a cross. Andreozzi is sixth in scoring in Division II, with 3 goals and 3 assists for 9 points. 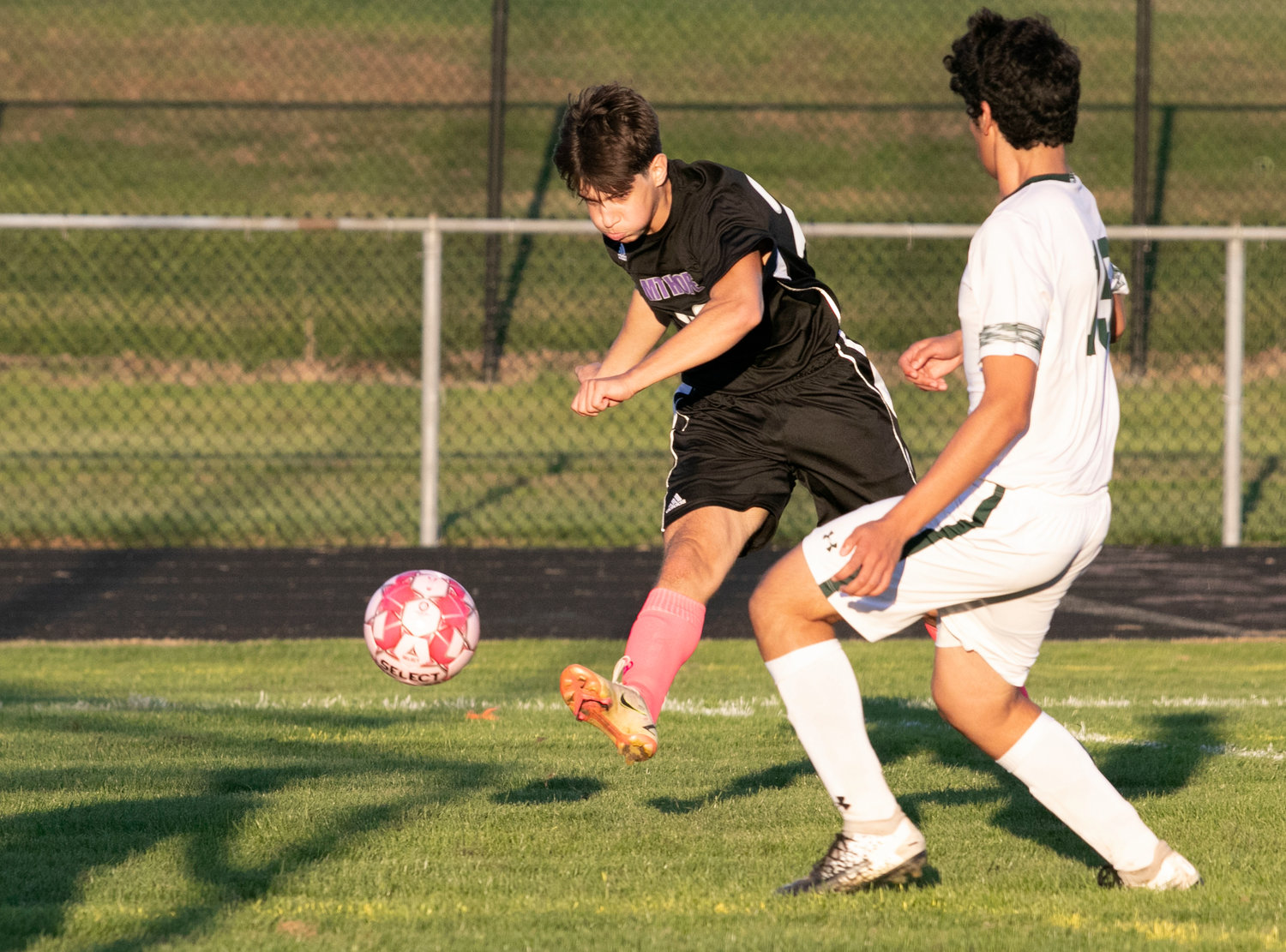 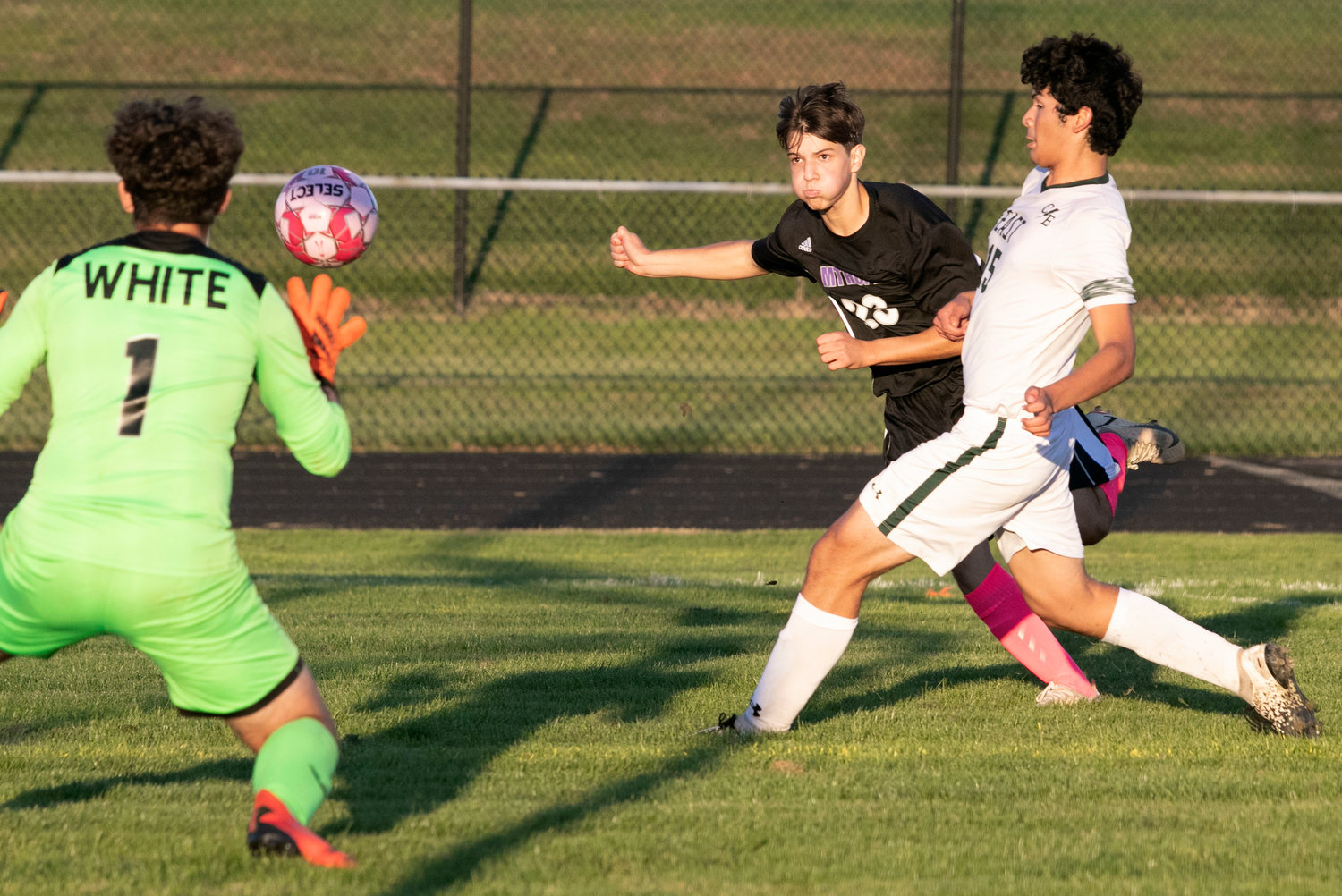 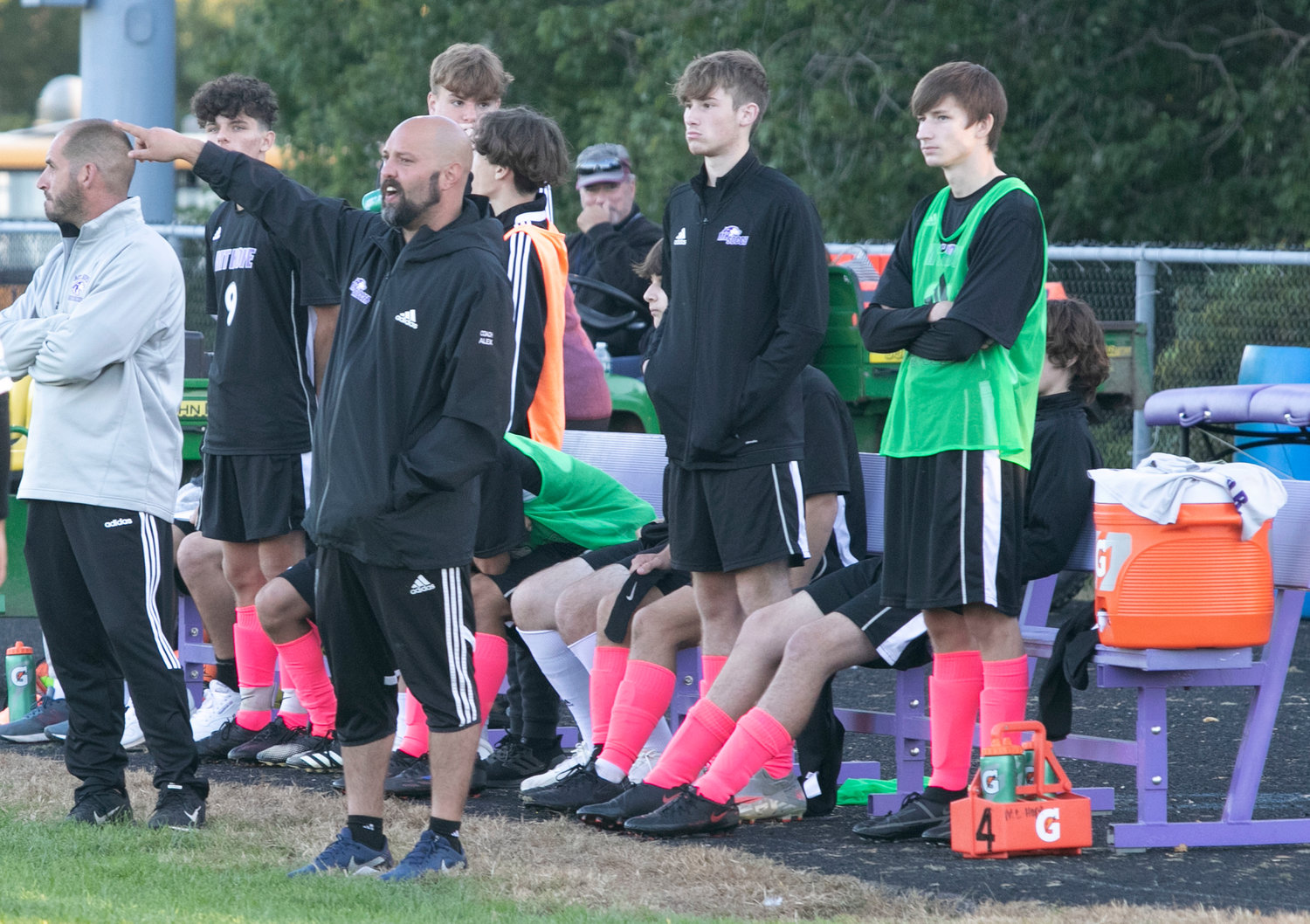 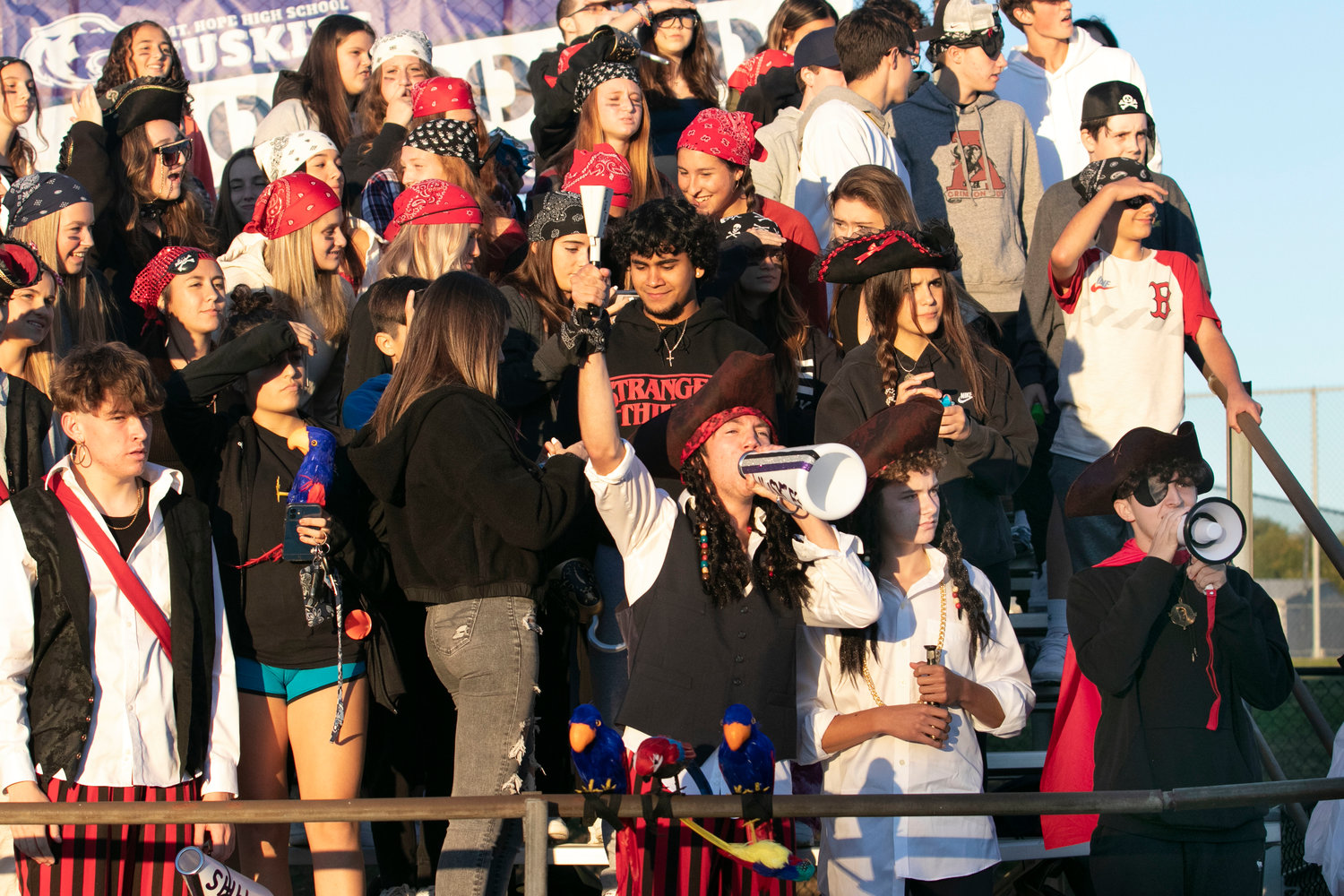 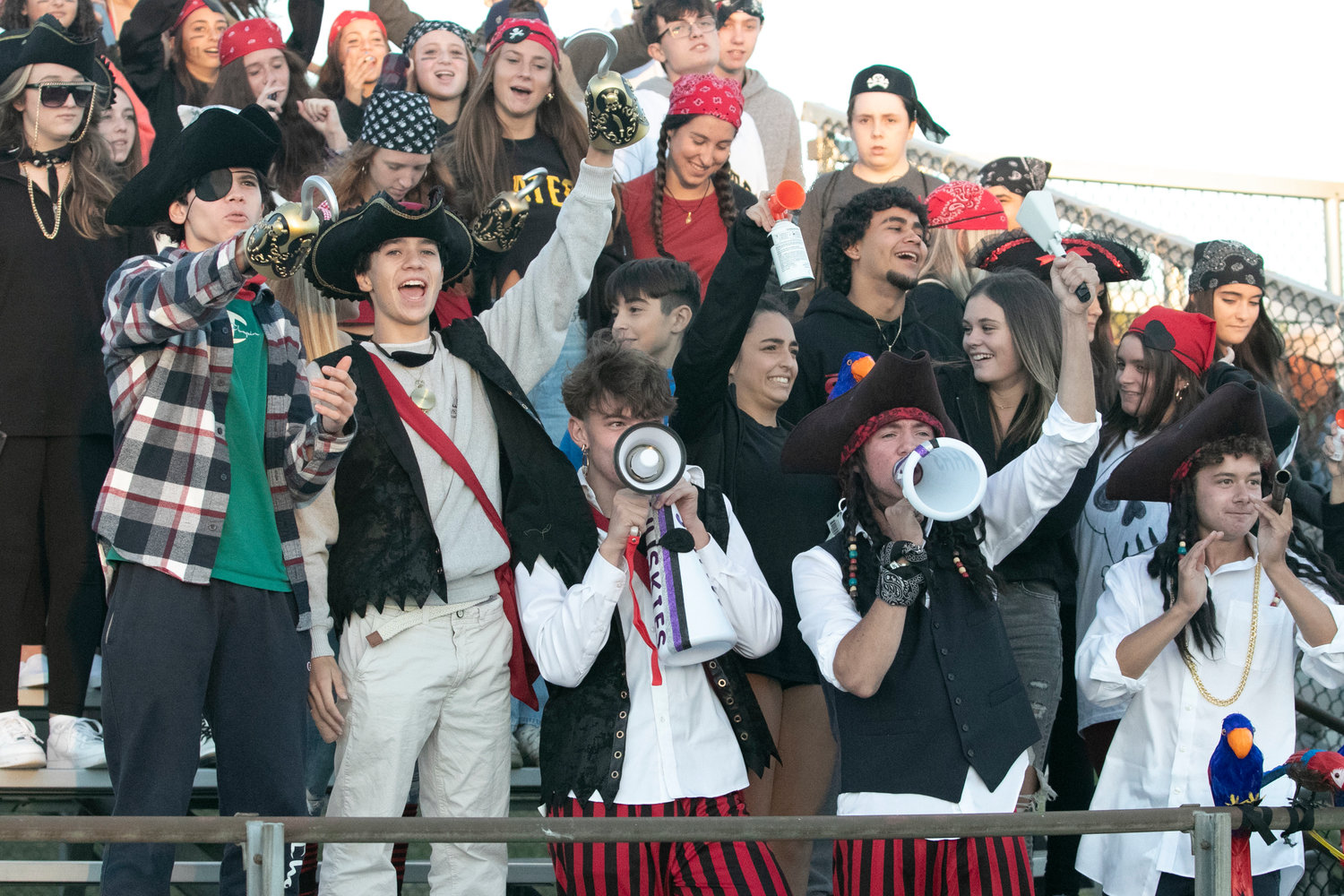 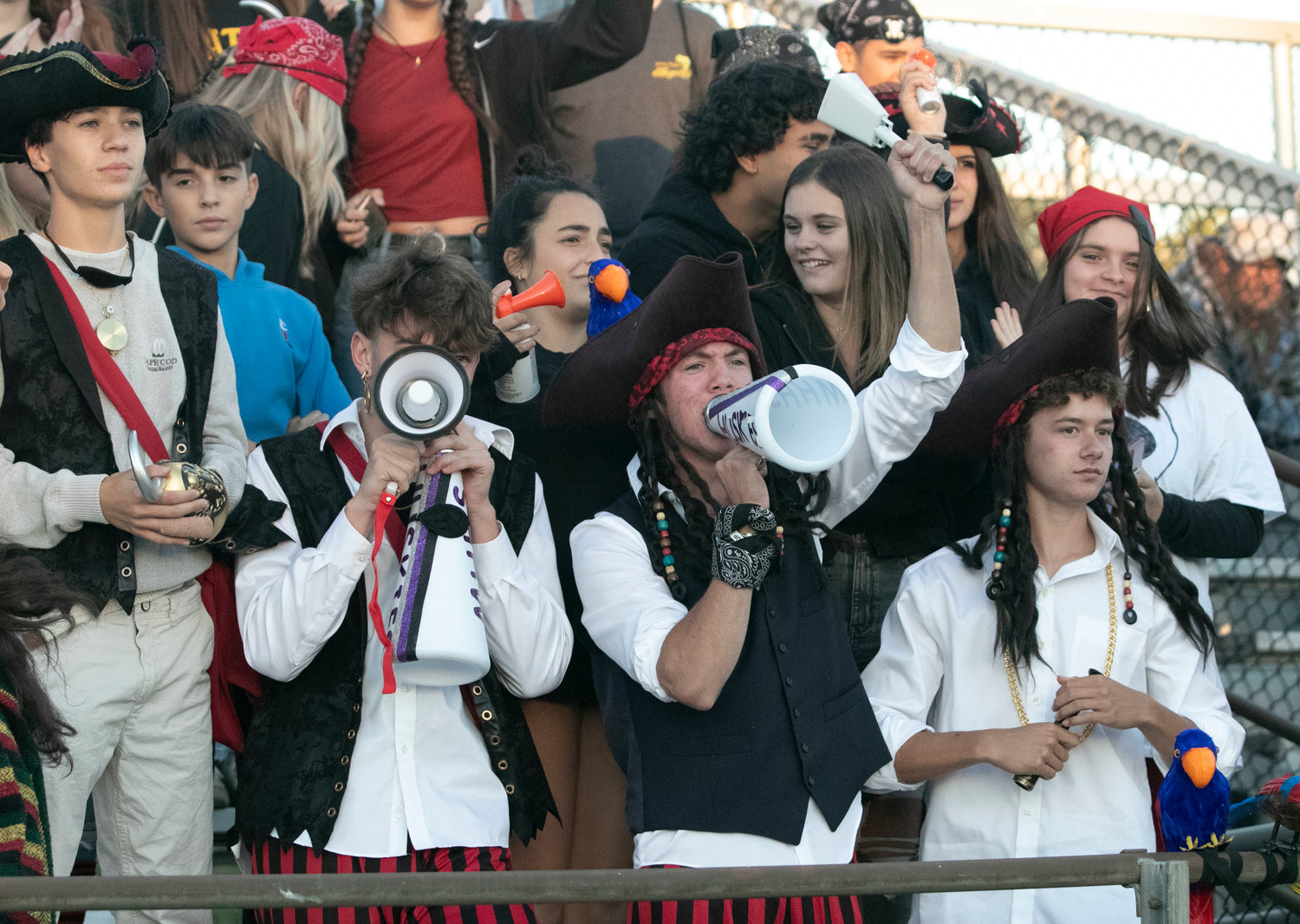 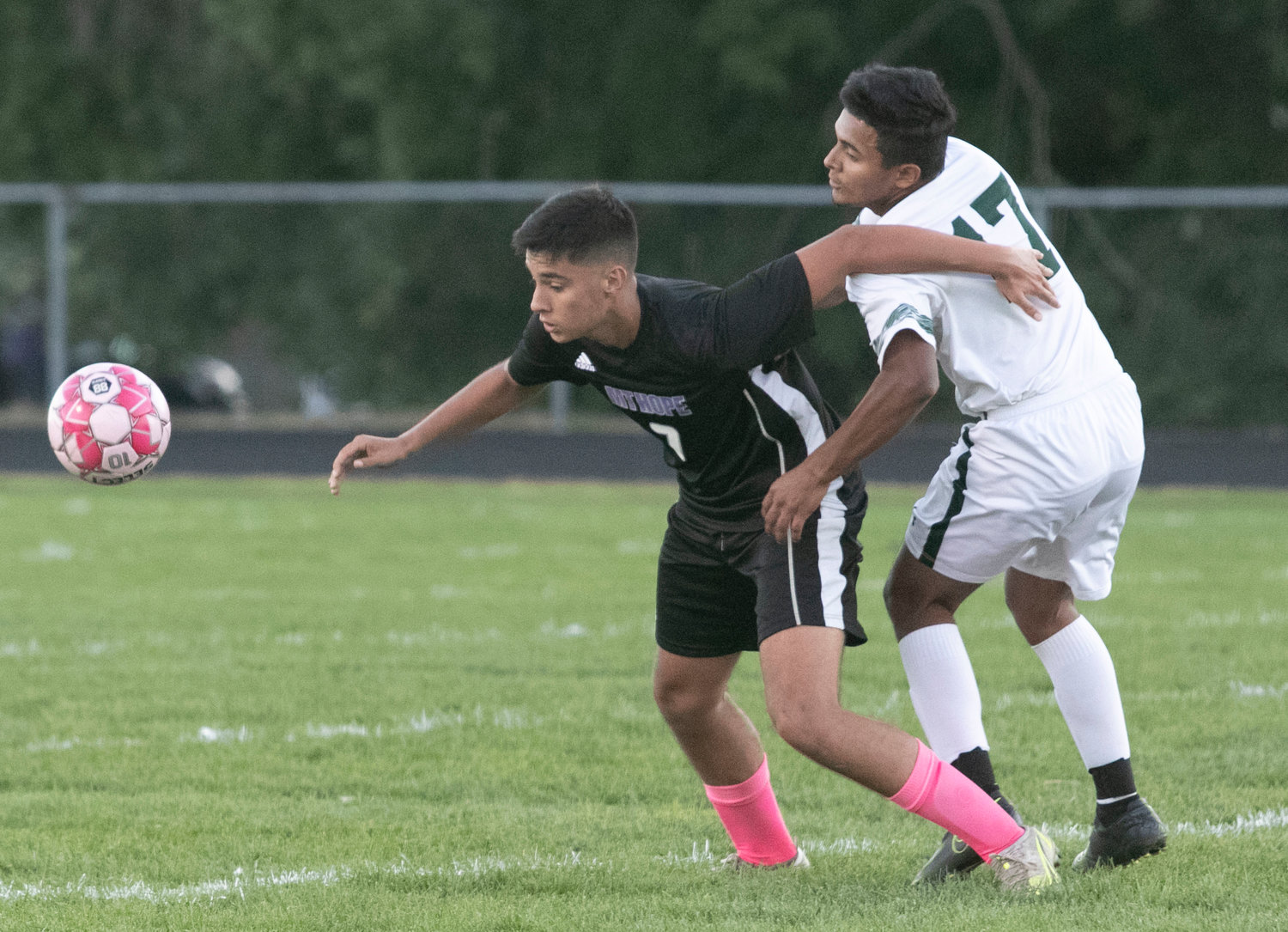 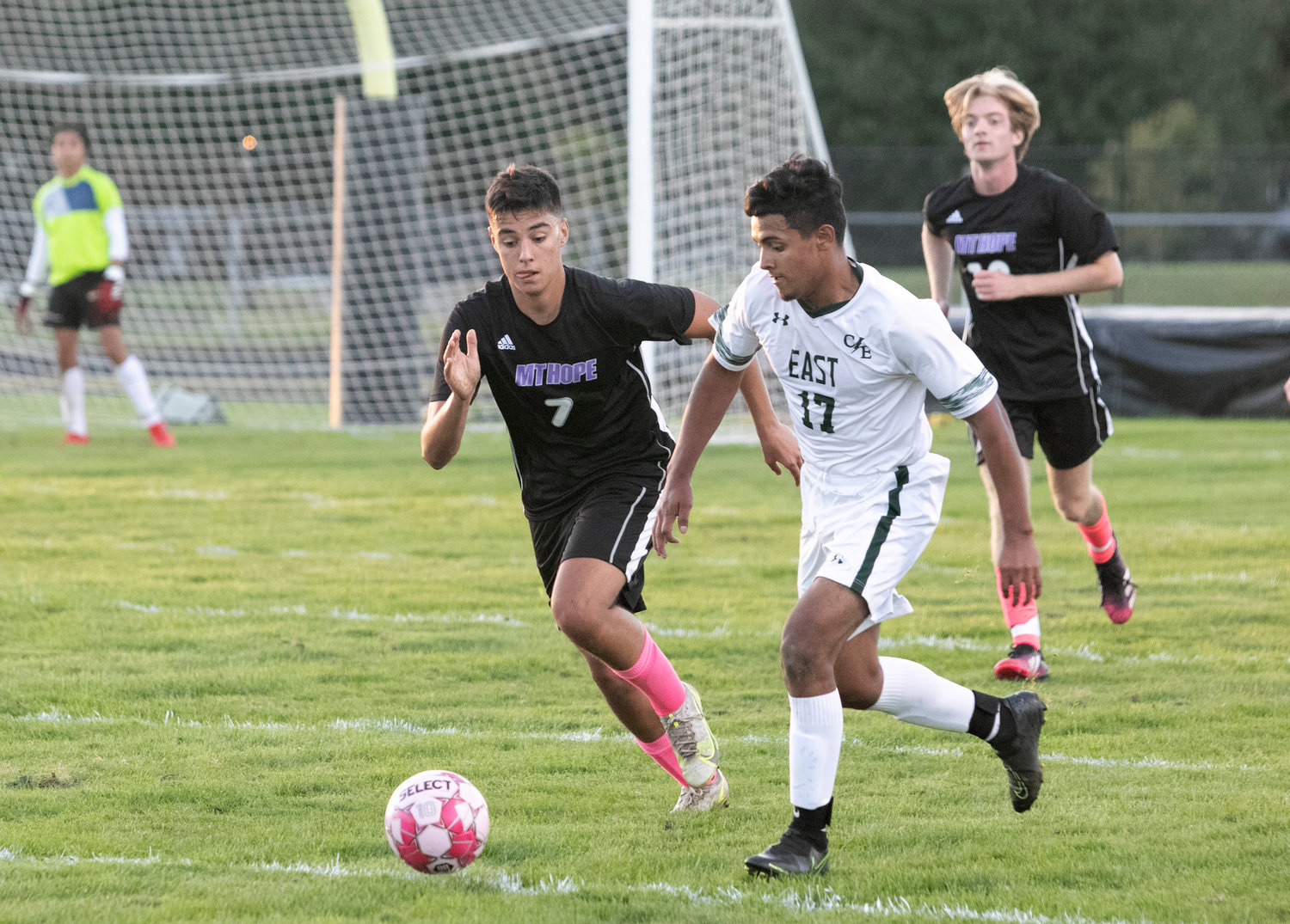 Midfielder Jayden Terra dribbles the ball up field. Terra and the center midfielders have been one of the team’s strengths this season.
Previous Next
Posted Monday, October 4, 2021 3:13 pm
Photos and story by Richard W. Dionne, Jr.

The fall sun slid beneath the trees creating shadows on Vendituoli Field as the Mt. Hope soccer team overpowered Cranston East, 4-1, during a home game on Friday afternoon. The Huskies are currently at the top of Division II, with a record of 7-0-1. Maddox Canario, Noah Furtado, Nick Andreozzi and Chad Parente, scored for Mt. Hope, as they blistered East goalkeeper, David White, with 19 shots.

“We are off to a good start this year,” said Huskies head coach, Alex Couto. “We expect to be where we are right now.”

“The boys are on a redemption tour this year,” said Coach Couto. “We are hoping to be back.”

The Huskies have won 30 games in Coach Couto’s three years as head coach and have made a trip to the semifinals as well, in his first season, in 2019.

This season the Huskies are hoping to stay on top of Division II and avoid a mid-season swoon like last season.

“We moved from first place, down to sixth place,” Coach Couto said.

The swoon made it tougher on the team, with a long playoff run to reach the finals.

But not this season.

“This was a big win for us today,” Coach Couto said, as the team holds off Lincoln (7-1) and North Smithfield (6-1) to stay in first place.

The team has bought in to Coach Couto’s message and coaching style. “They’ve been working very hard,” Coach Couto said. “I’d never tell them, but I’m proud of them. I like to keep them on their toes.”

The Huskies are loaded with offensive talent this season. Senior striker, Noah Furtado, is once again the team’s leading scorer with 9 goals, 4 assists for 22 points, second in Division II, to Carlos Andrade of Cranston East, who has 23 points, according to Max Preps. Furtado scored the Huskies’ second goal against East, and assisted on two others on Friday night.

“Noah is off to a fast start this season,” Coach Couto said. “He’s a workhorse and works extremely hard. He’s doing a solid job working with his center midfielders and wingers.”

Junior Justin Mendes and freshman Maddox Canario start at wing, with senior, Dylan Brol and sophomore, Jesse Wilson, subbing in off the bench.

“Brol has been like a super sub,” said Coach Couto. “He has scored some key goals for us this season.”

Brol is tied with with Parente, Canario and Terra in scoring, with 3 goals, 2 assists for 8 points.

“We are pretty loaded,” said Coach Couto. “Our scoring has been pretty spread out for us, luckily. That’s where our success is coming from right now.”

Team leadership has also been the strength this season.

“We start eight seniors that have played for me for three years. We are older this year with thirteen total seniors on the team,” Coach Couto said.

The Huskies have reconfigured their defense in front of two time, all-division, senior goalkeeper, Matt Terceiro and are “Rock solid,” according to Coach Couto.

“We’ve taken some wingers and put them in the back,” said Coach Couto. The team also moved former junior goalkeeper, Parker Camelo, to center back with senior Jack McNally. But McNally has been injured this season and junior Griffin Berardo has filled in nicely.

“Defense was an area where we lost a lot from last year,” said Coach Couto. “But they have really answered the bell for us and have stepped up their game.”

“I’m excited,” Coach Couto said. “I know what the ultimate goal is for this team. I push them to the limits every day to get there. We know the feeling of losing in double overtime. We don’t want that feeling again.”

Both the boys and girls soccer teams volunteered during a soccer-Special Olympics event at Colt State Park on Saturday.

The Huskies have eight games left, before playoffs, with one, non-league game against Barrington on Oct. 20th.