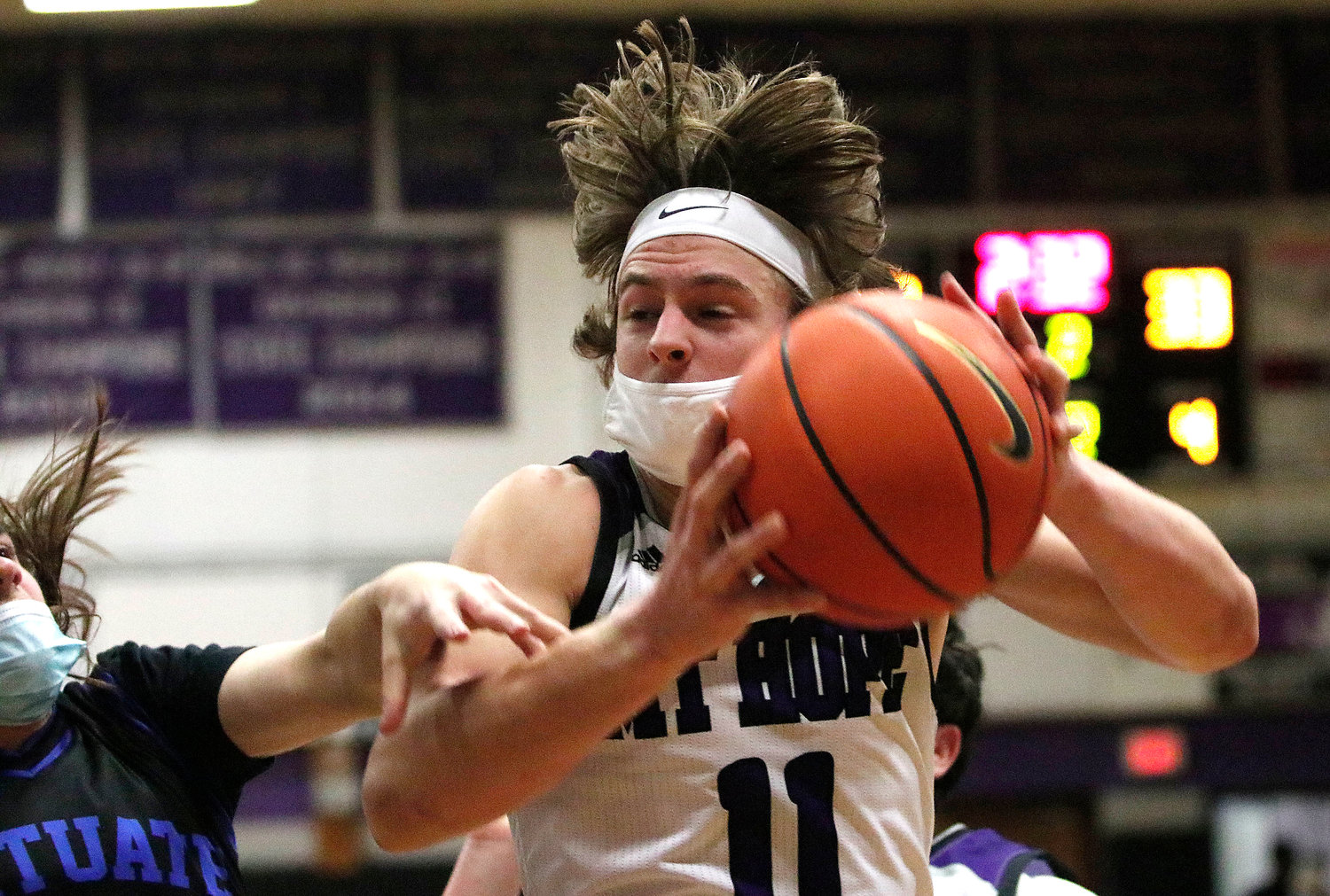 Bruce McGuire pulls down a rebound in the first half. 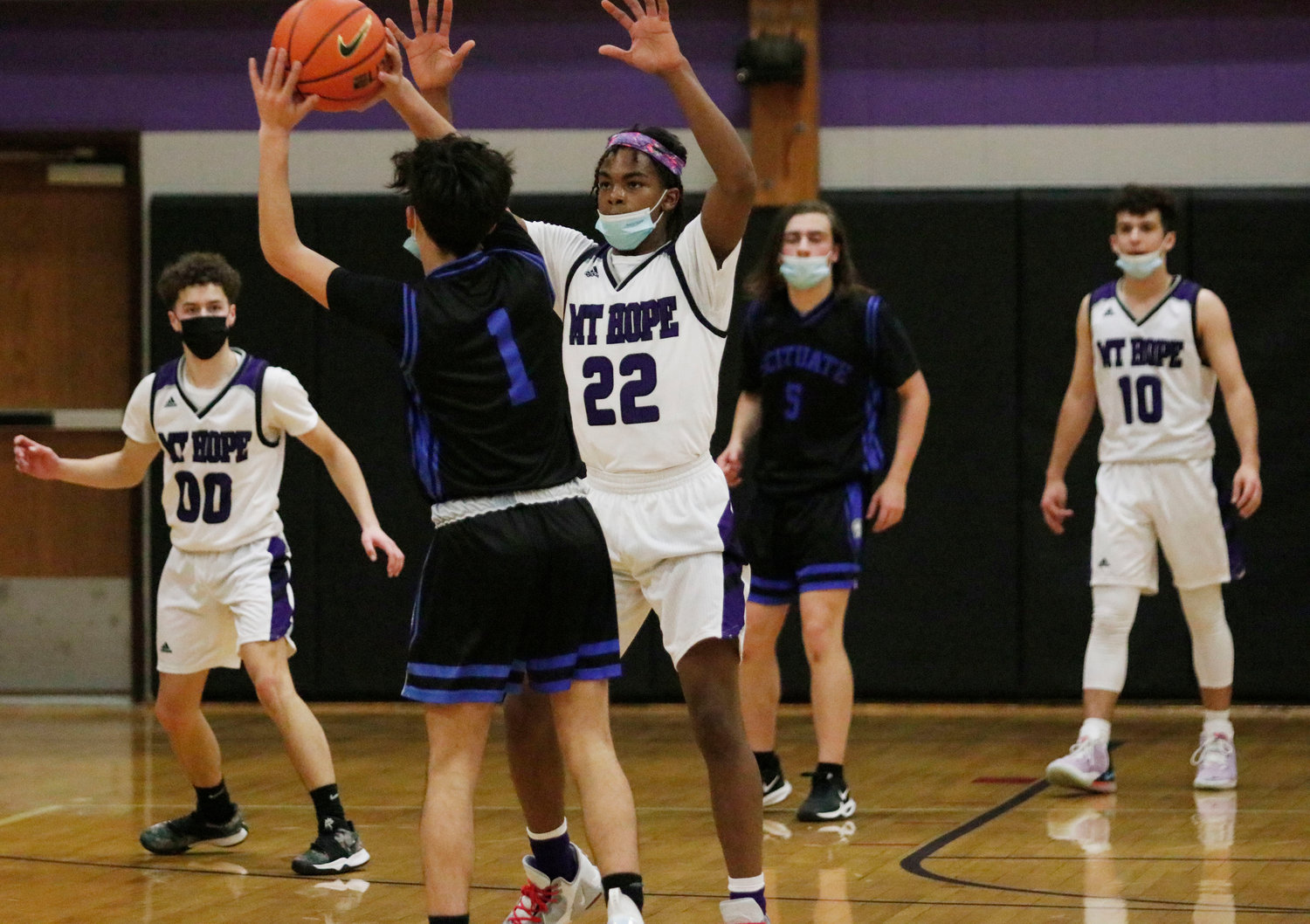 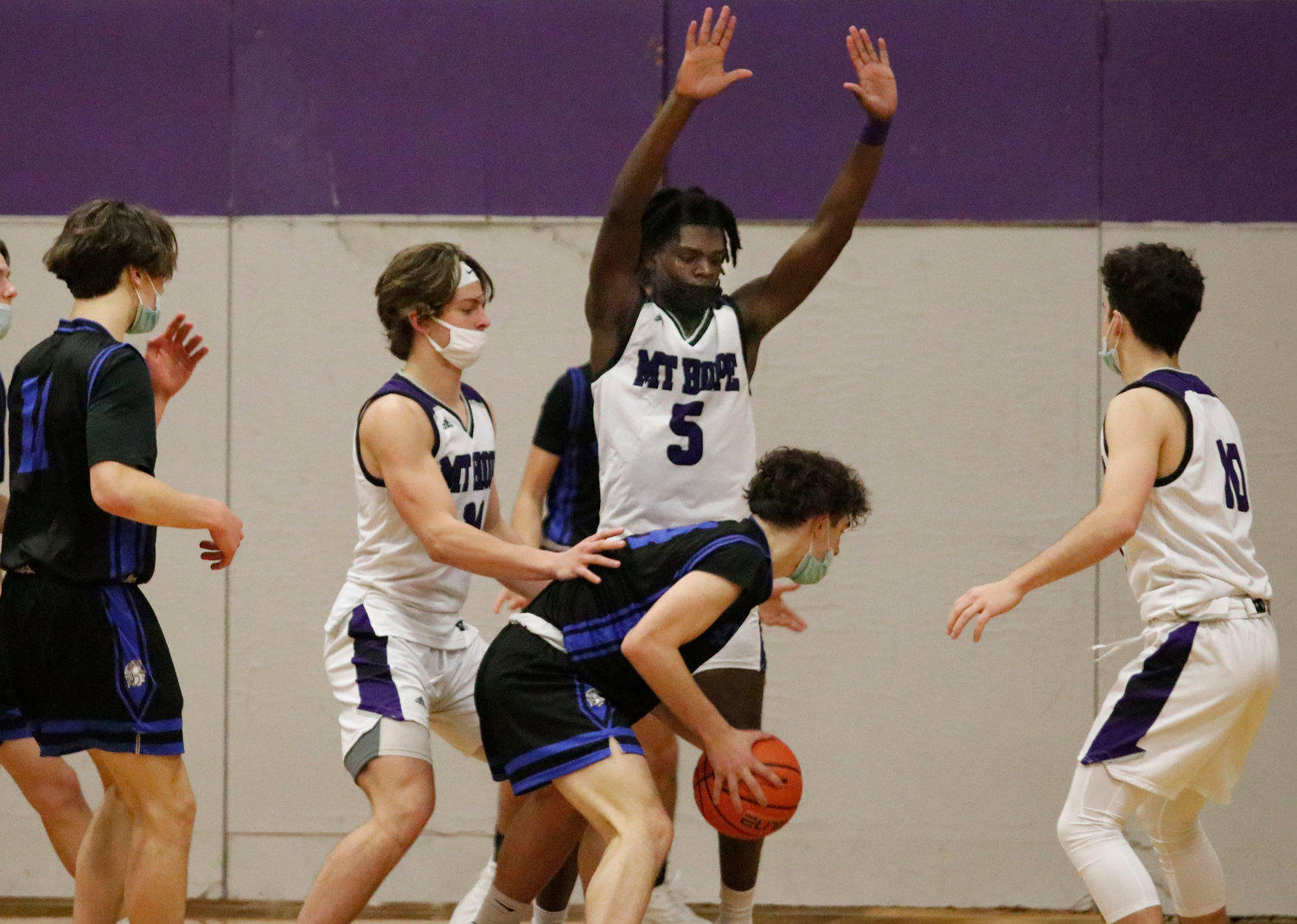 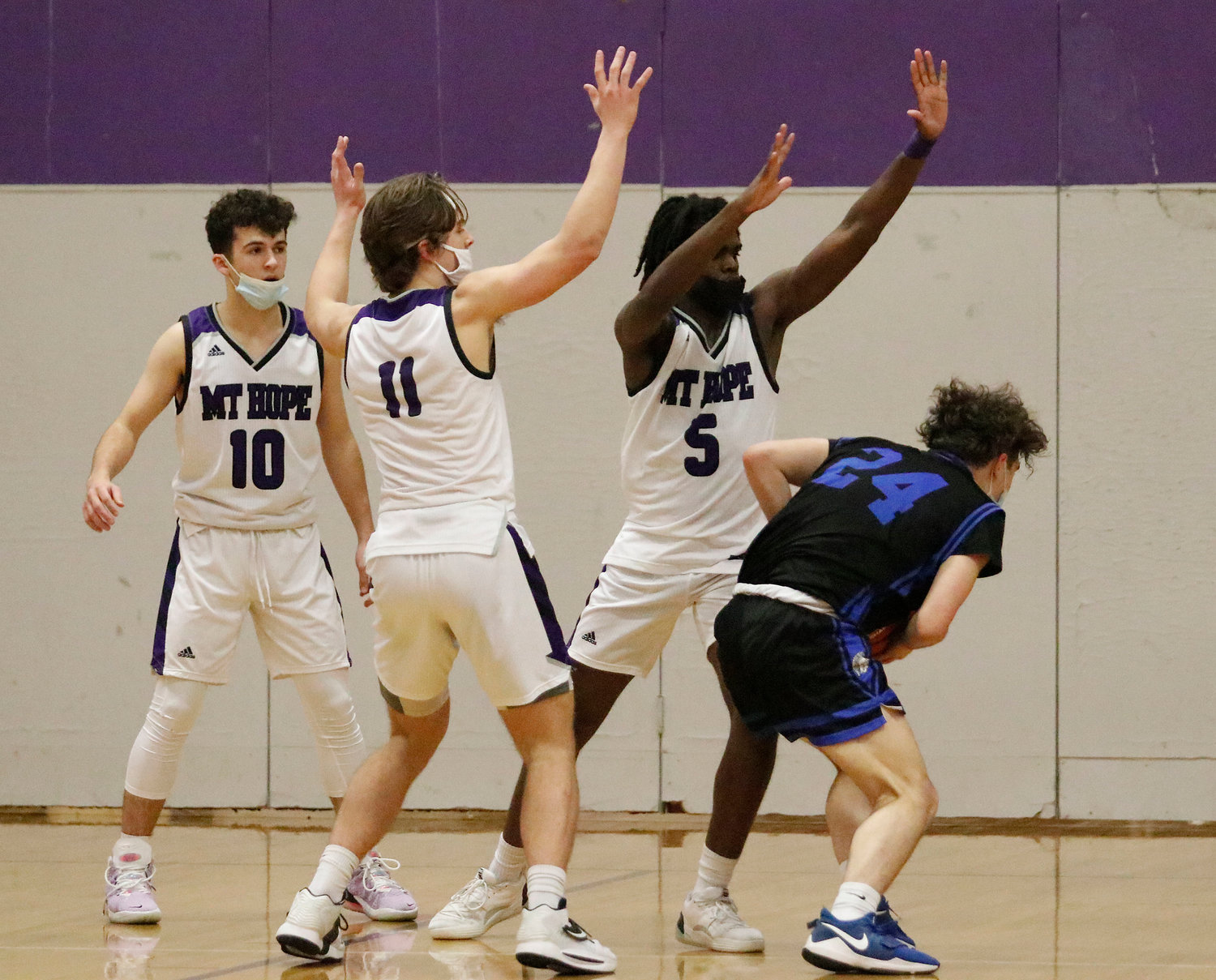 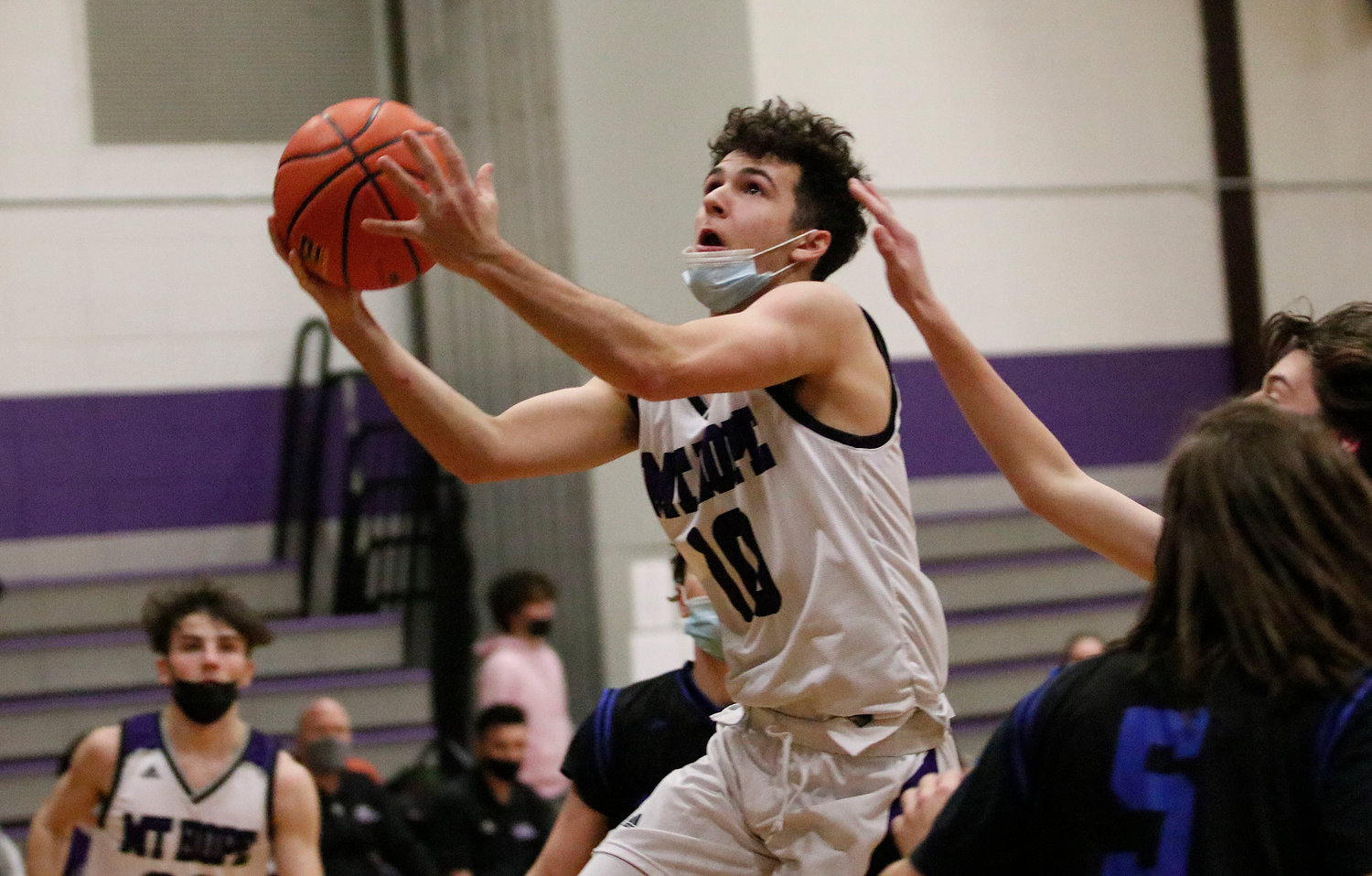 Parker Camelo drives in for a layup. 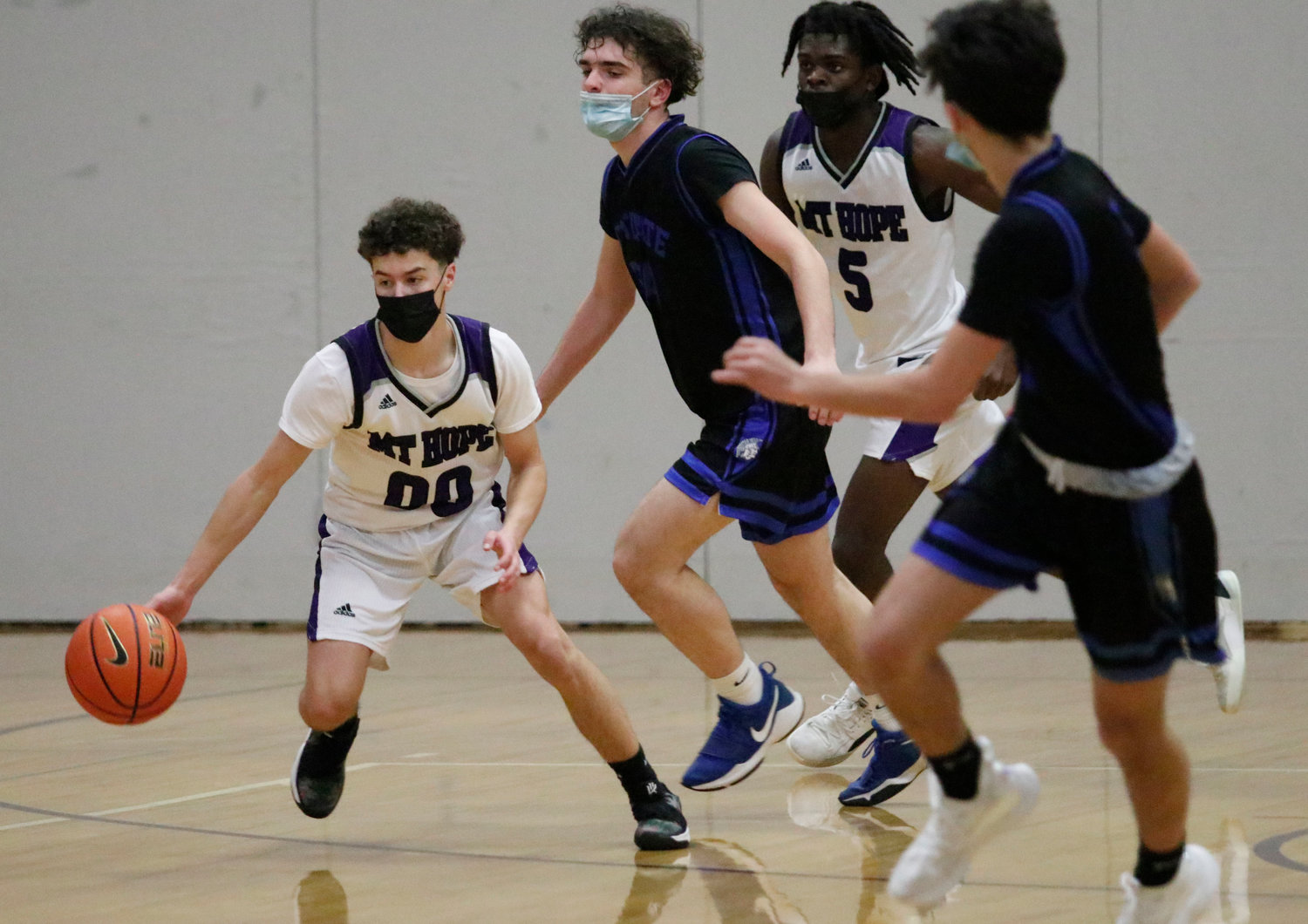 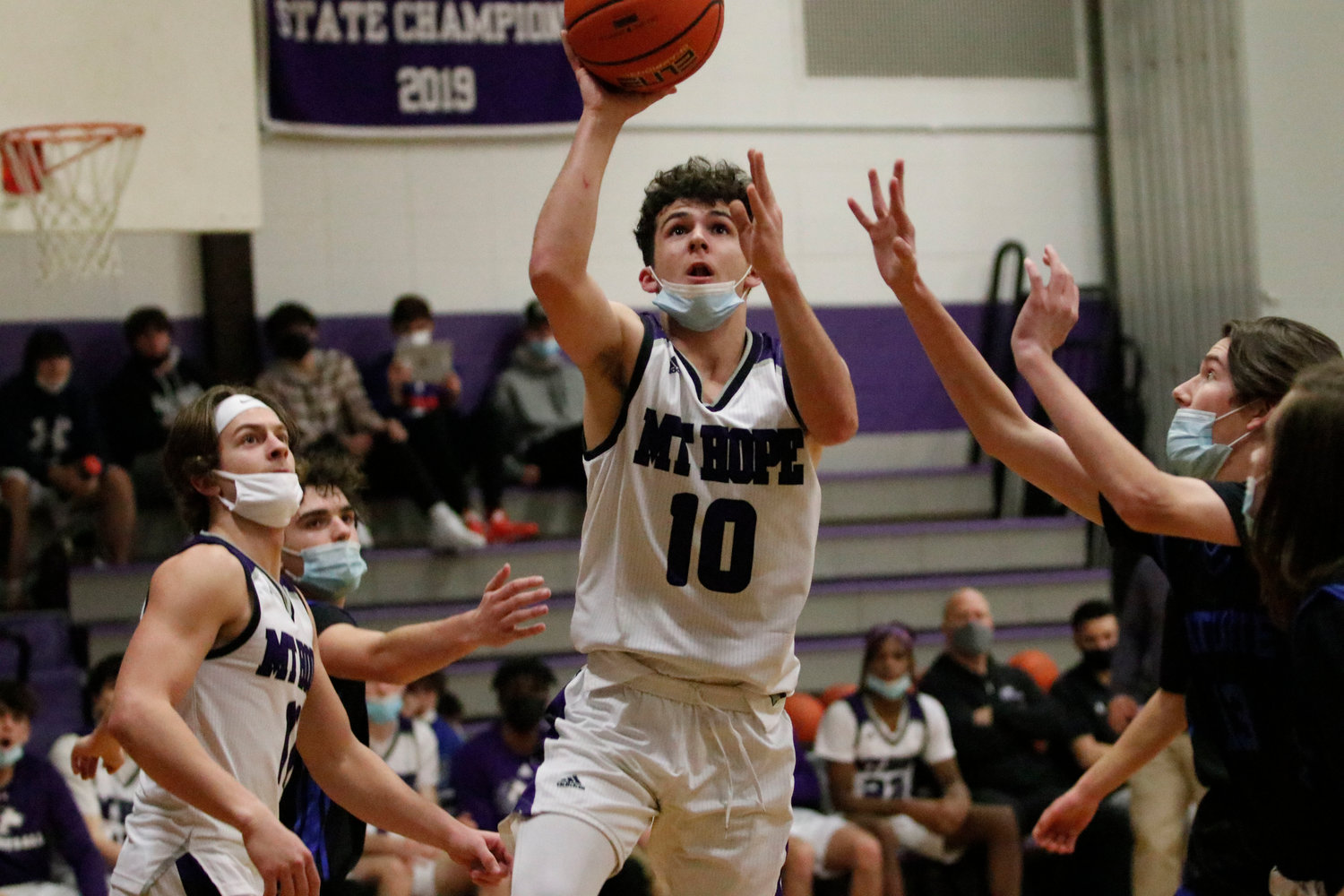 Bruce Mcguire (left) looks on as Parker Camelo drives in for a layup. 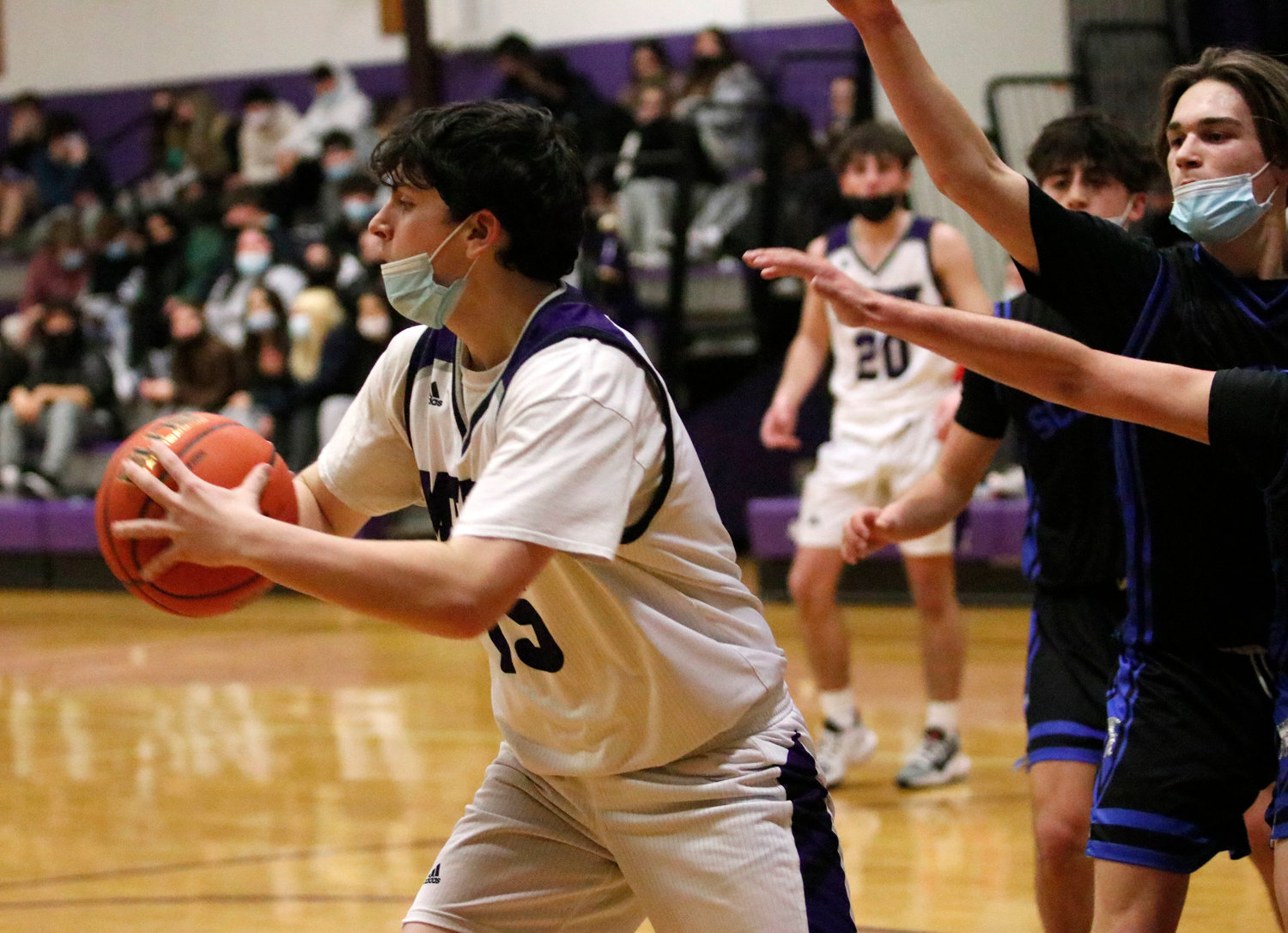 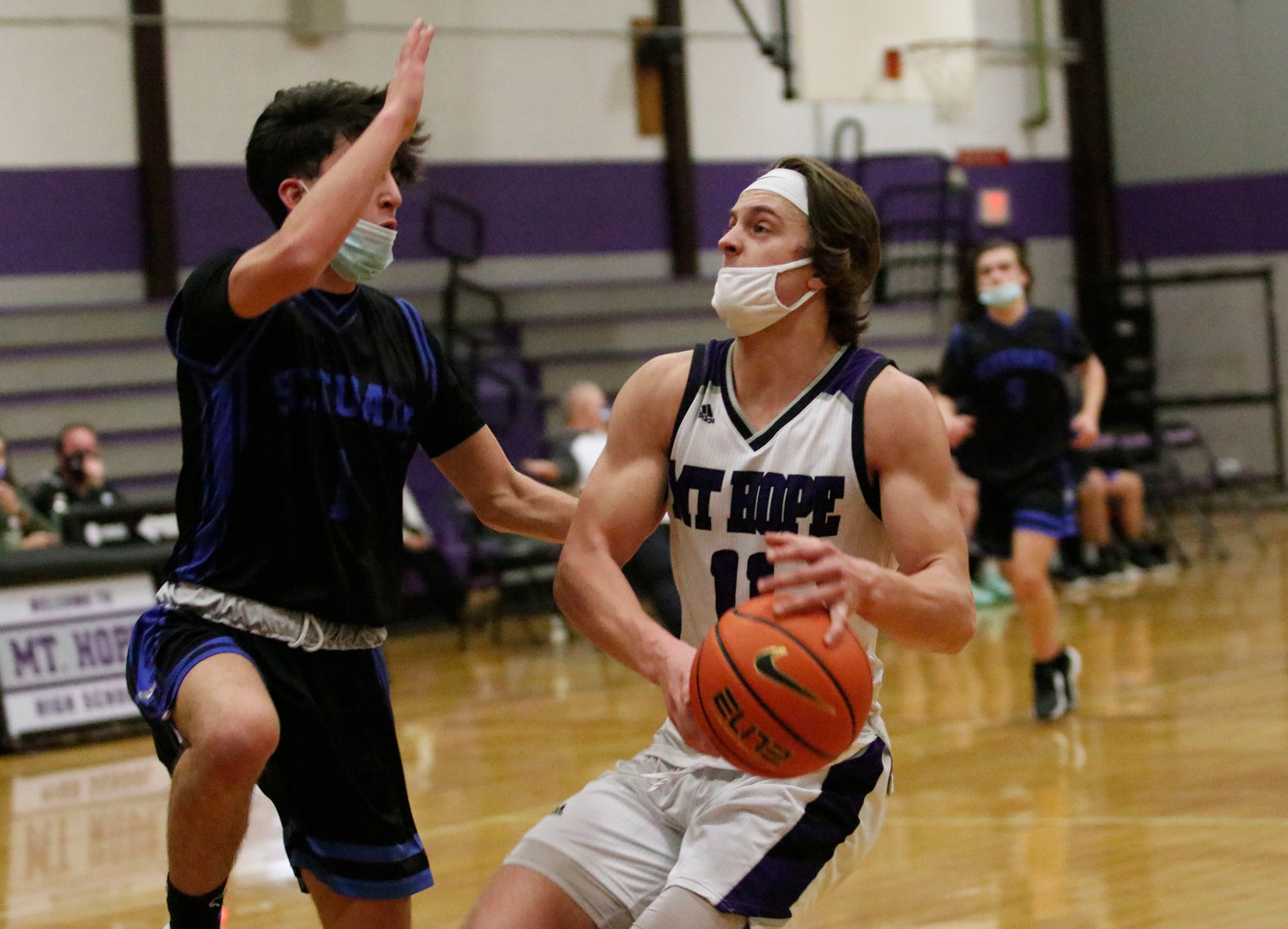 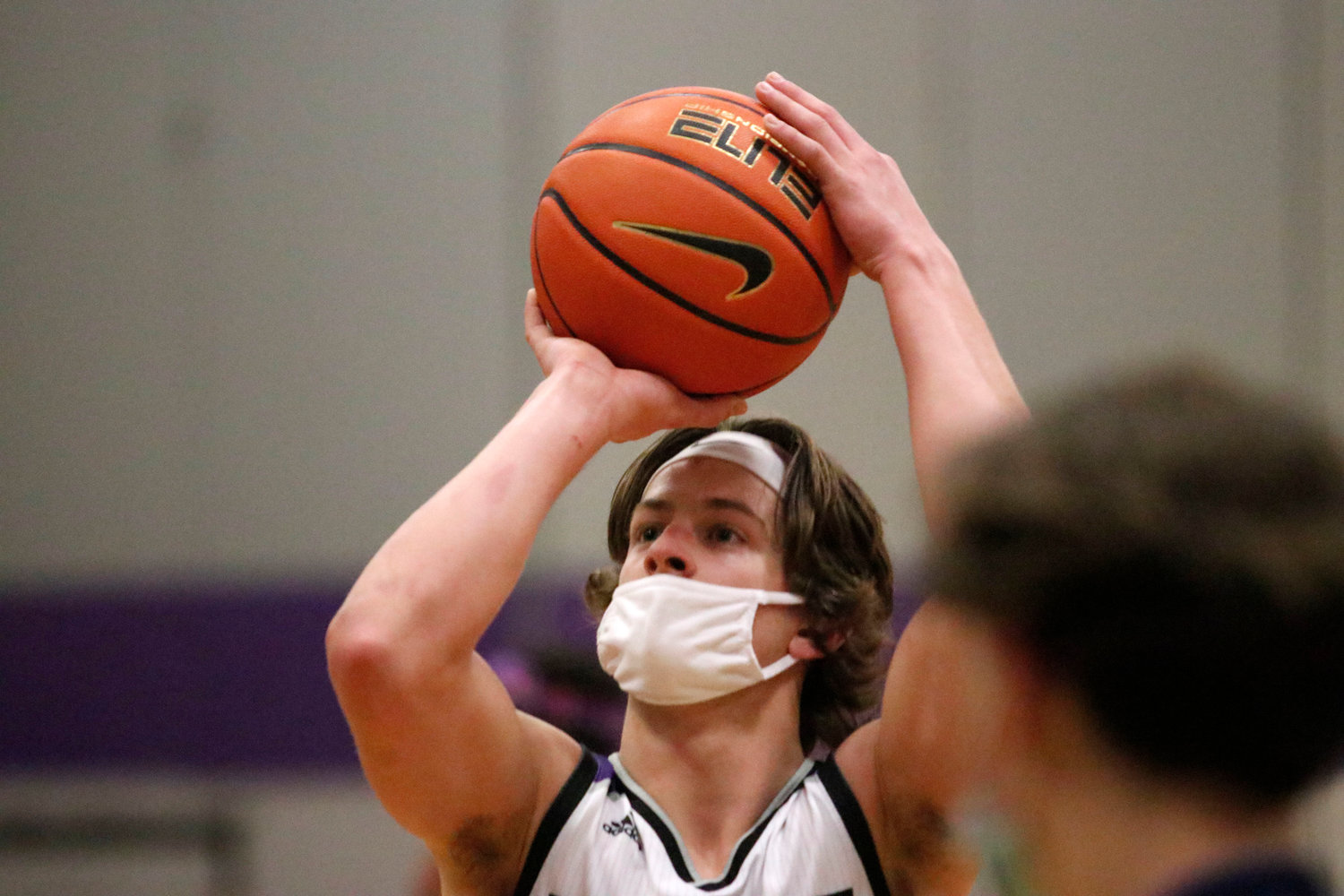 Bruce McGuire shoots a foul shot during the game. 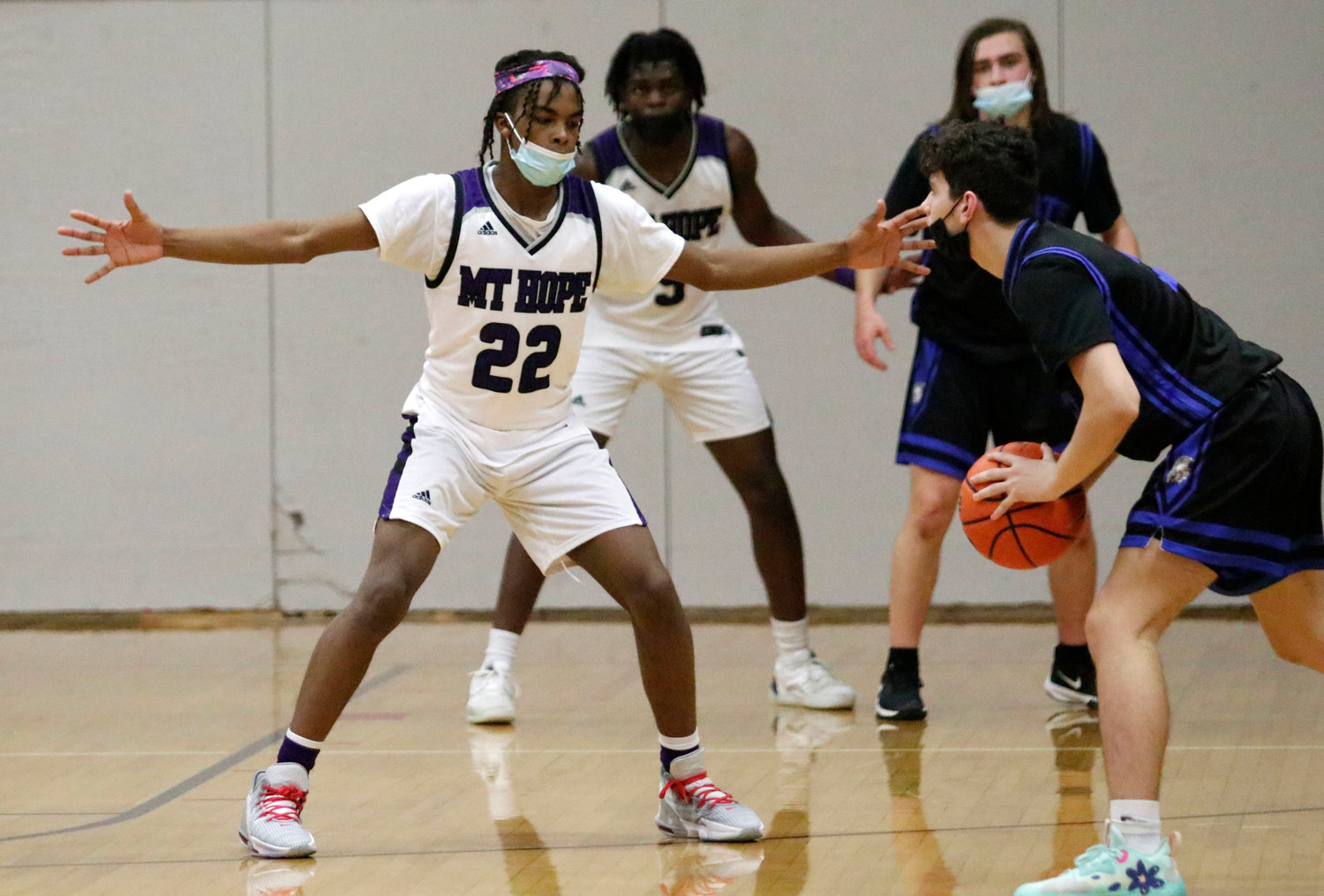 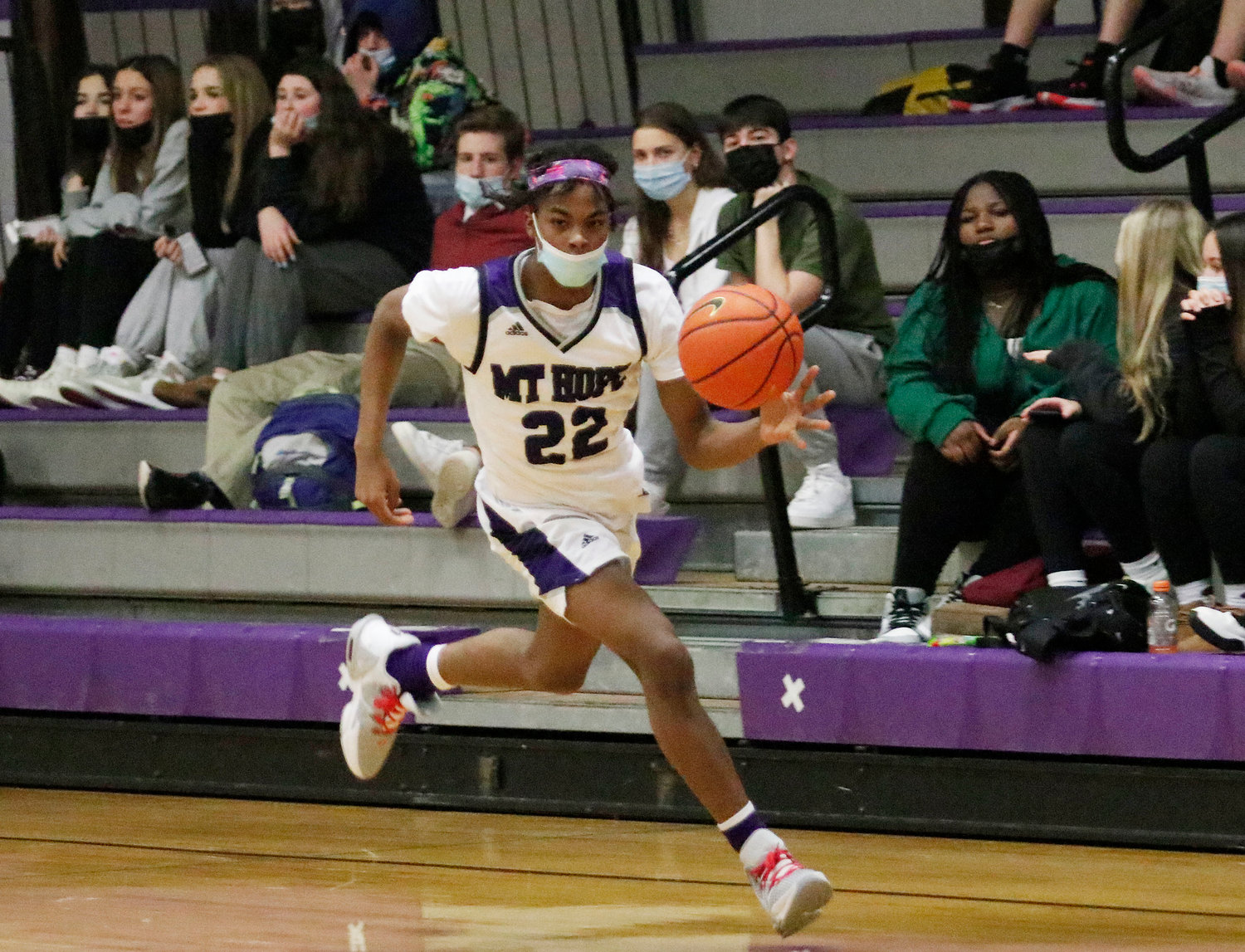 Faceson Hicks dribbles the ball up court on a fast break in the fourth quarter. 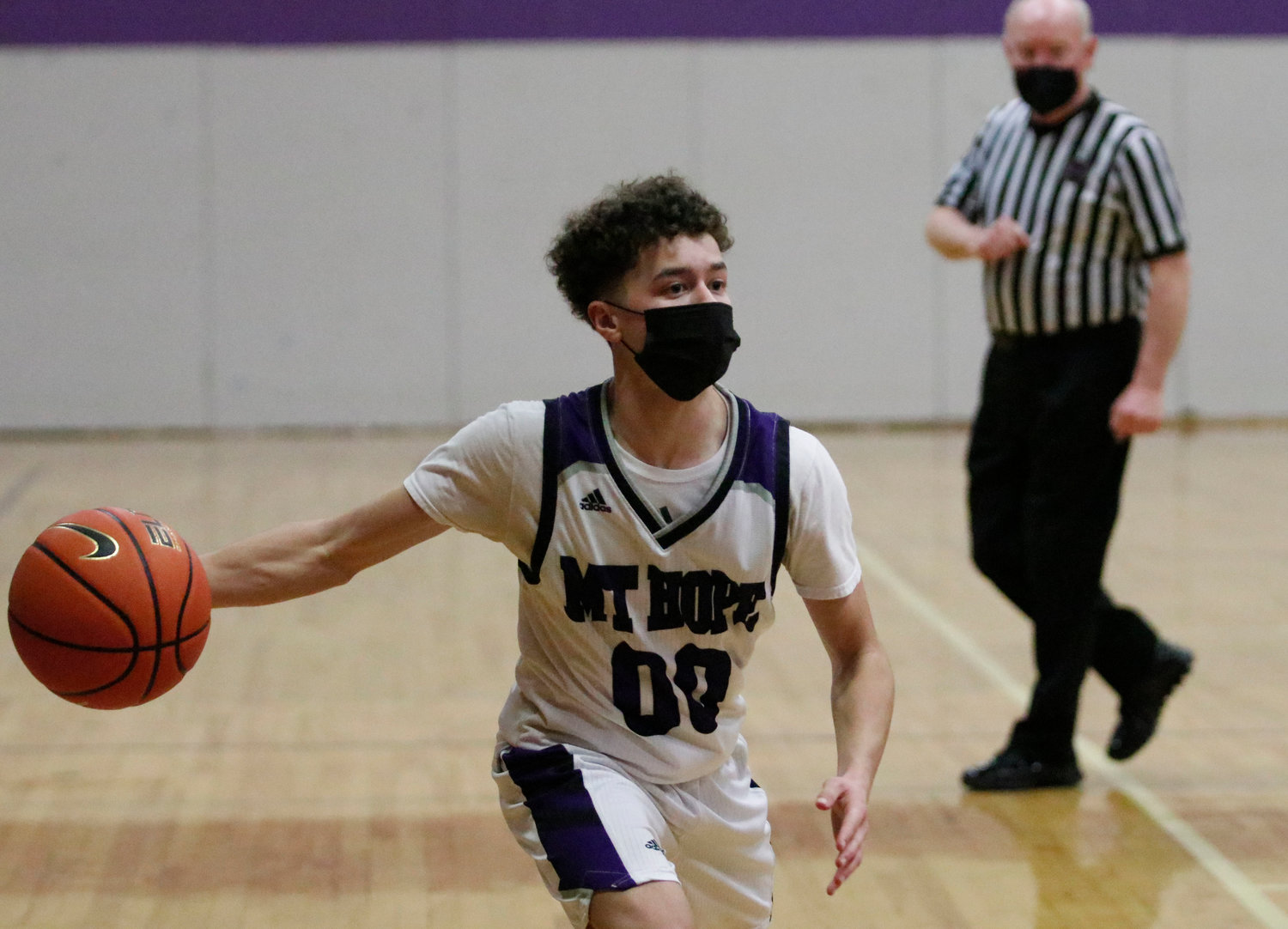 Josh deWolf makes a pass during the team's game against Scituate on Monday night. 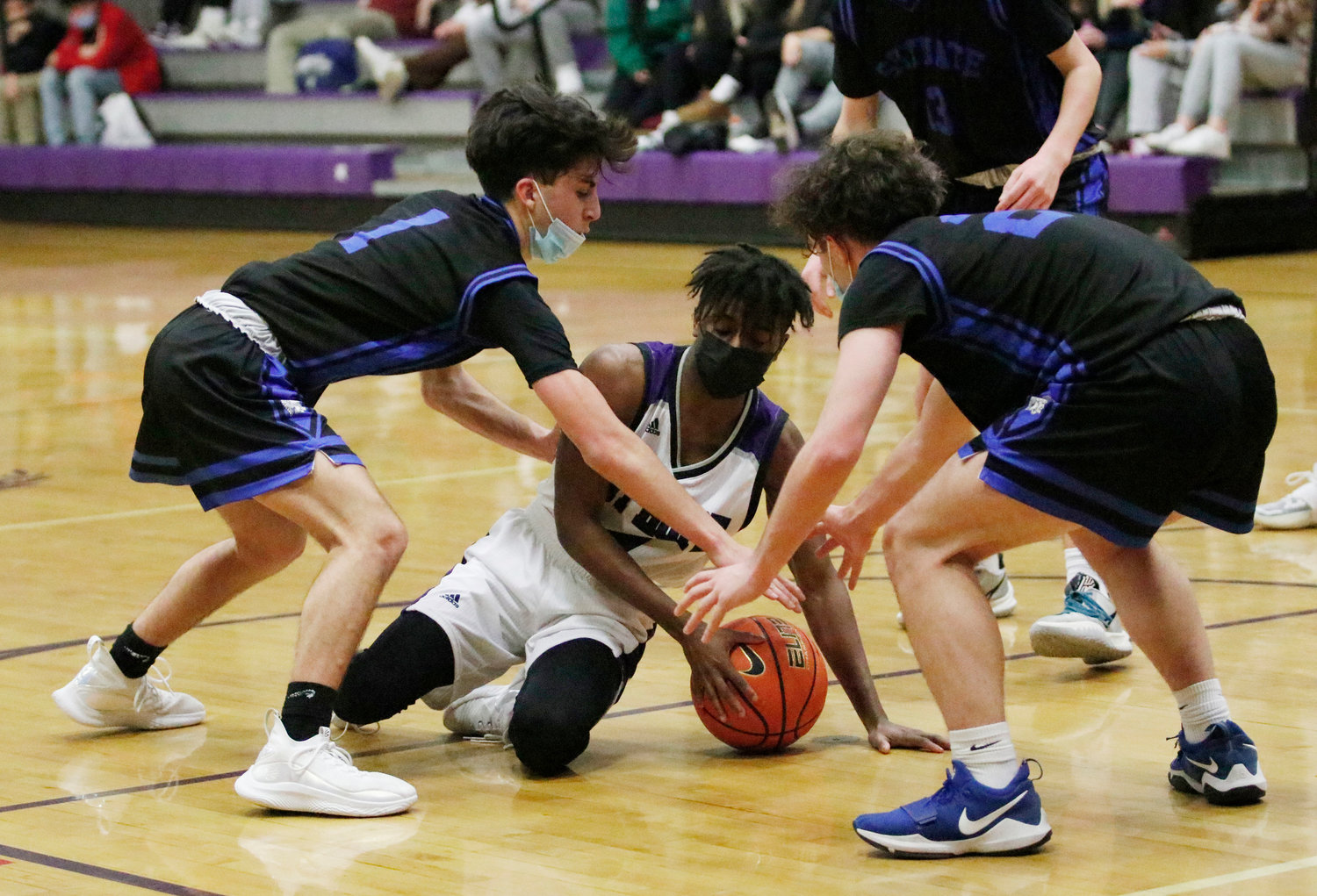 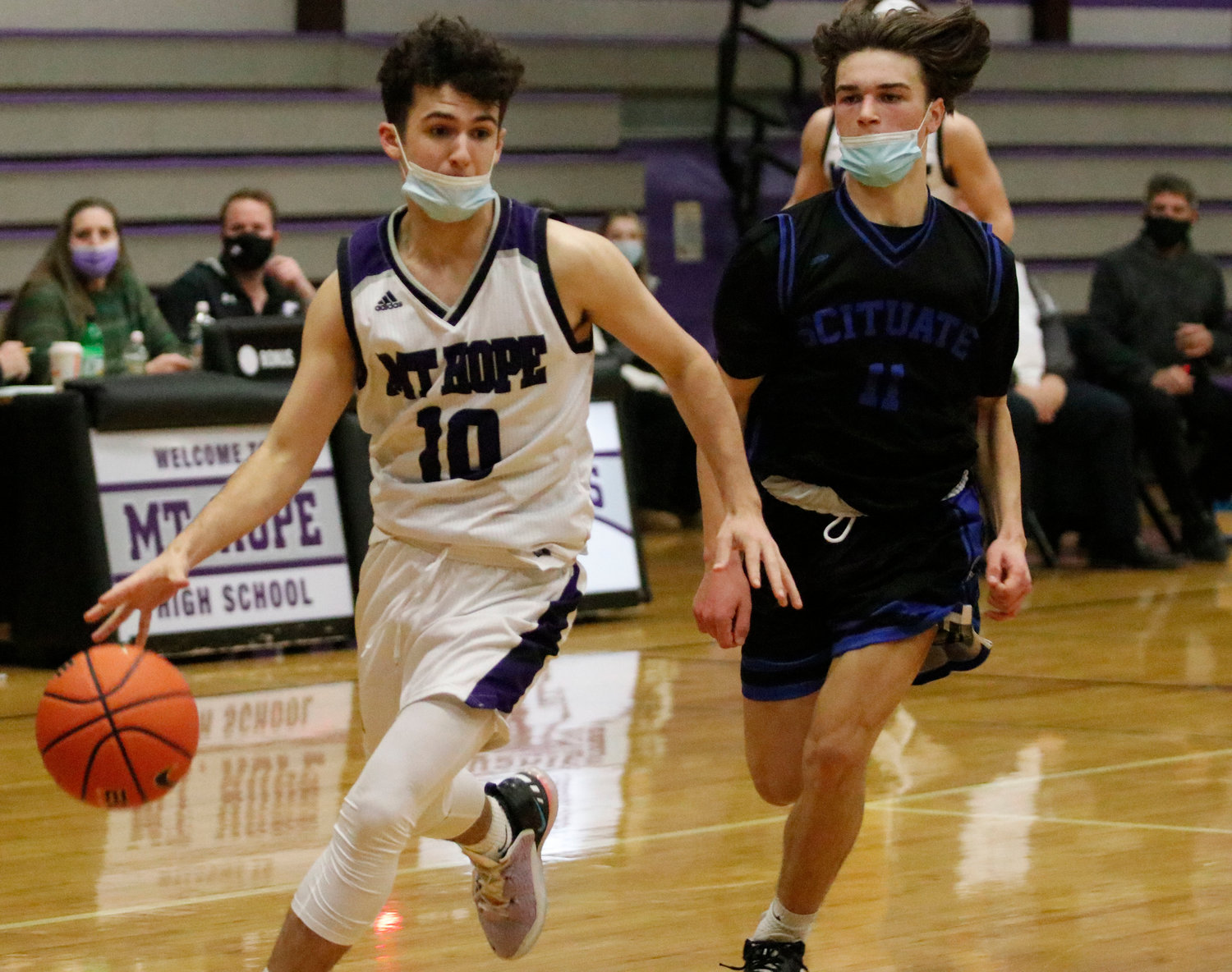 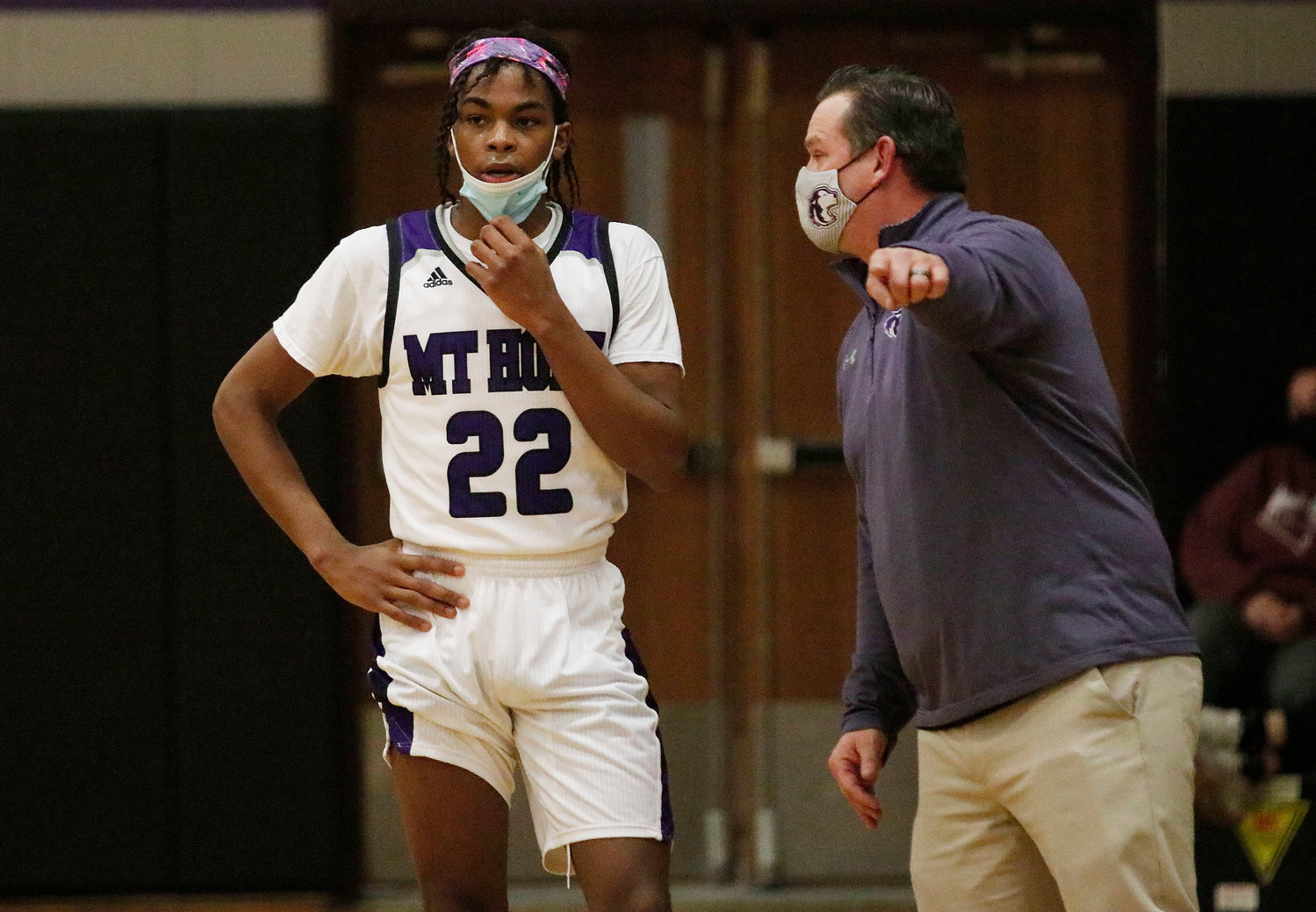 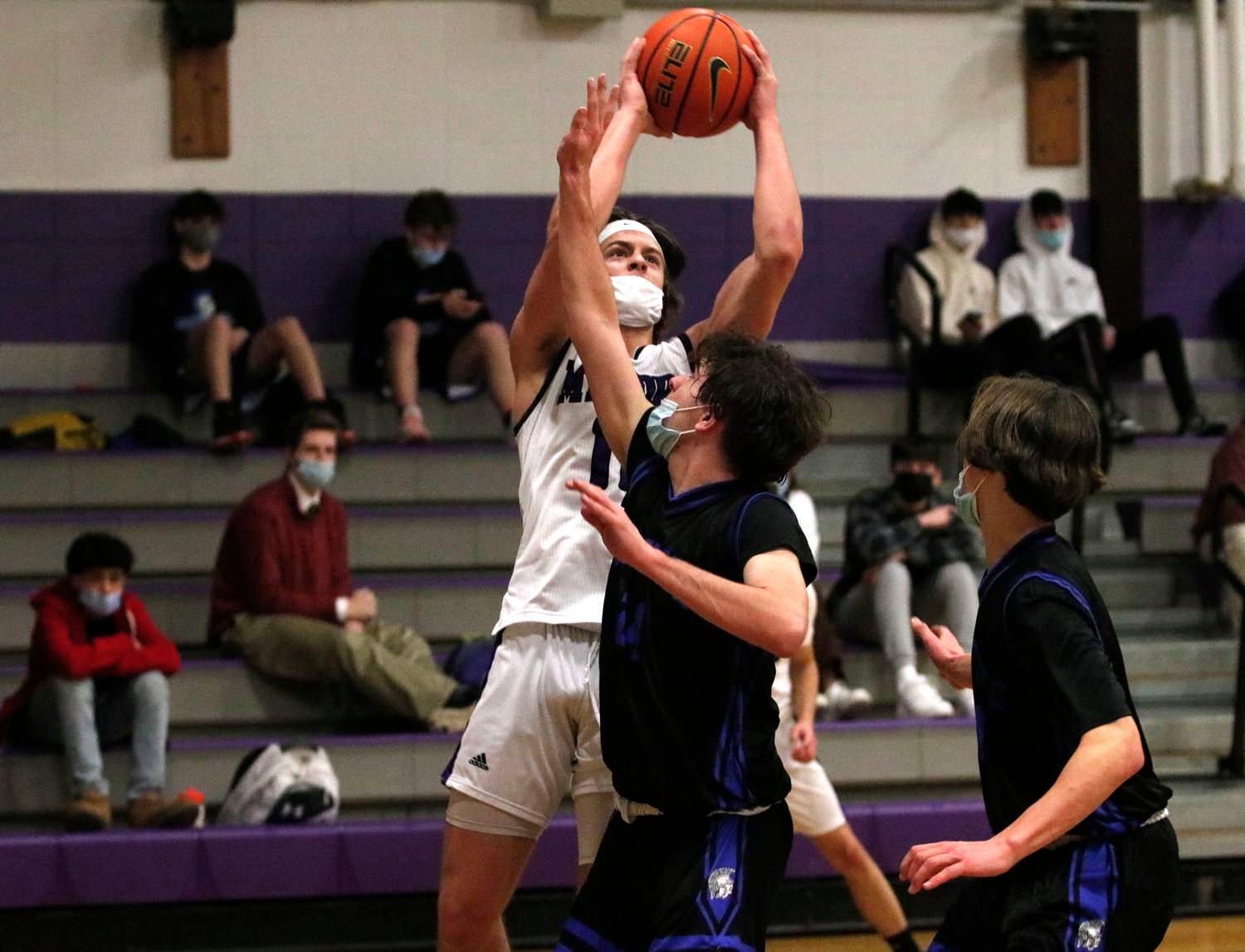 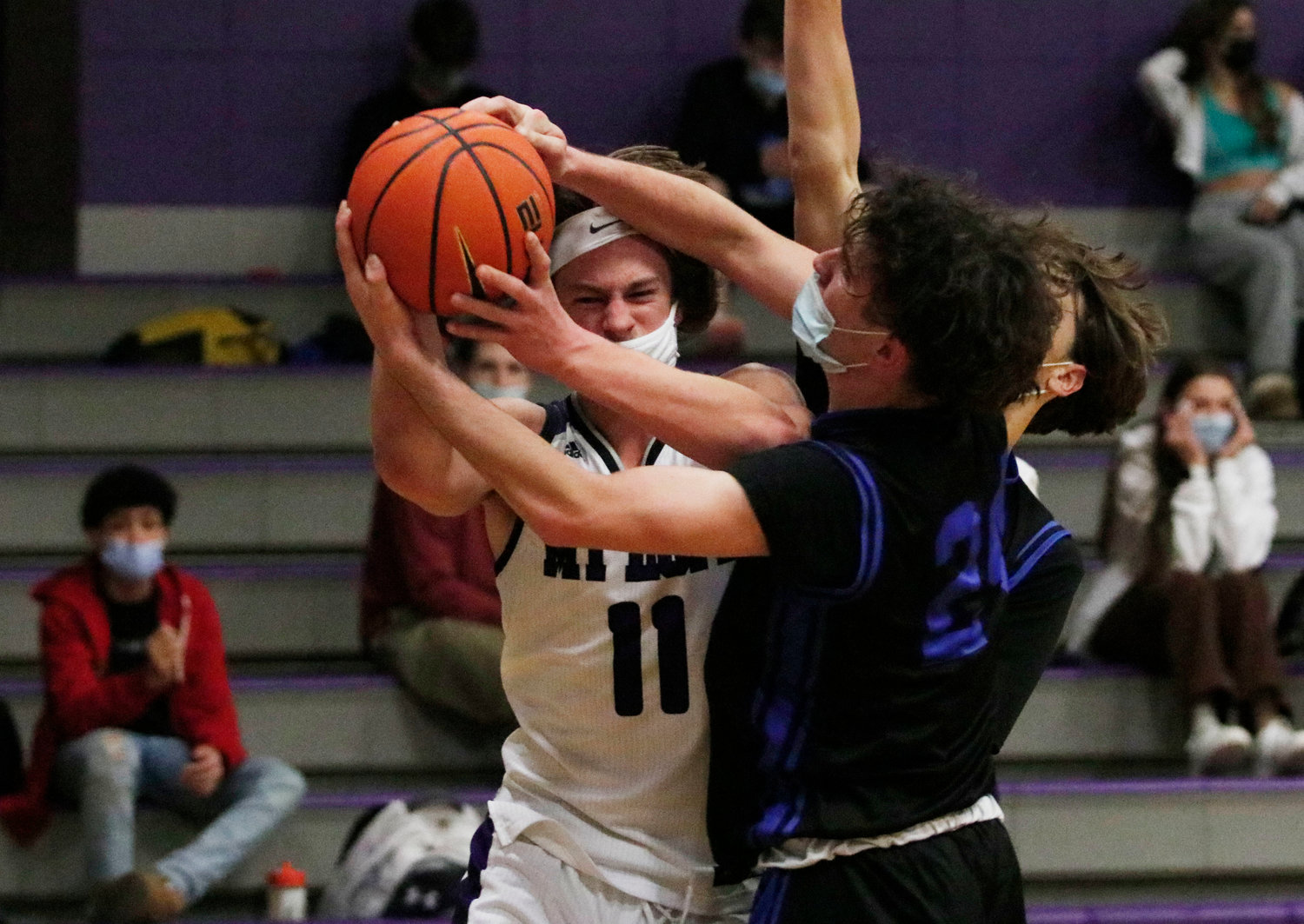 Bruce McGuire fights for a rebound. 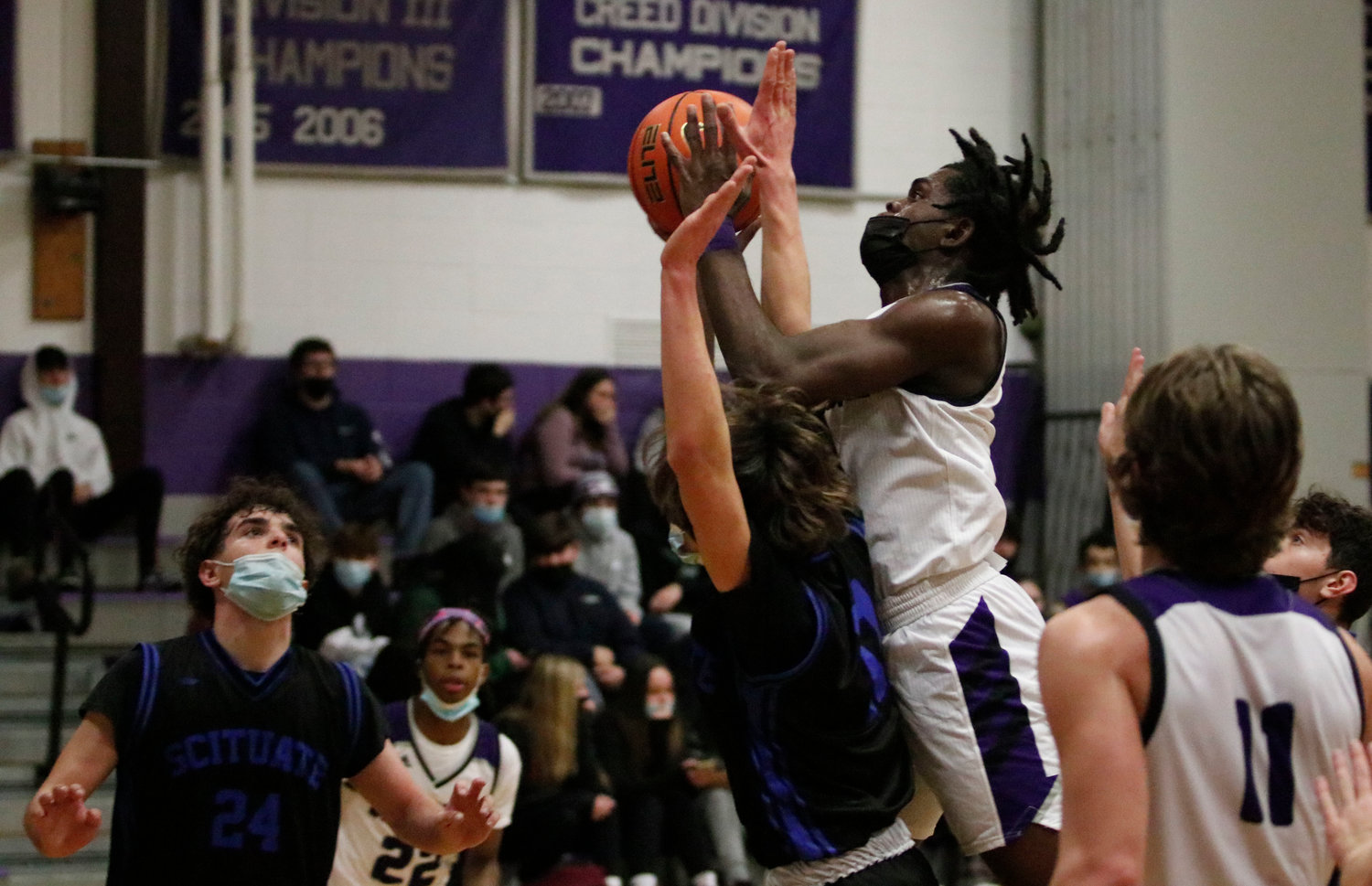 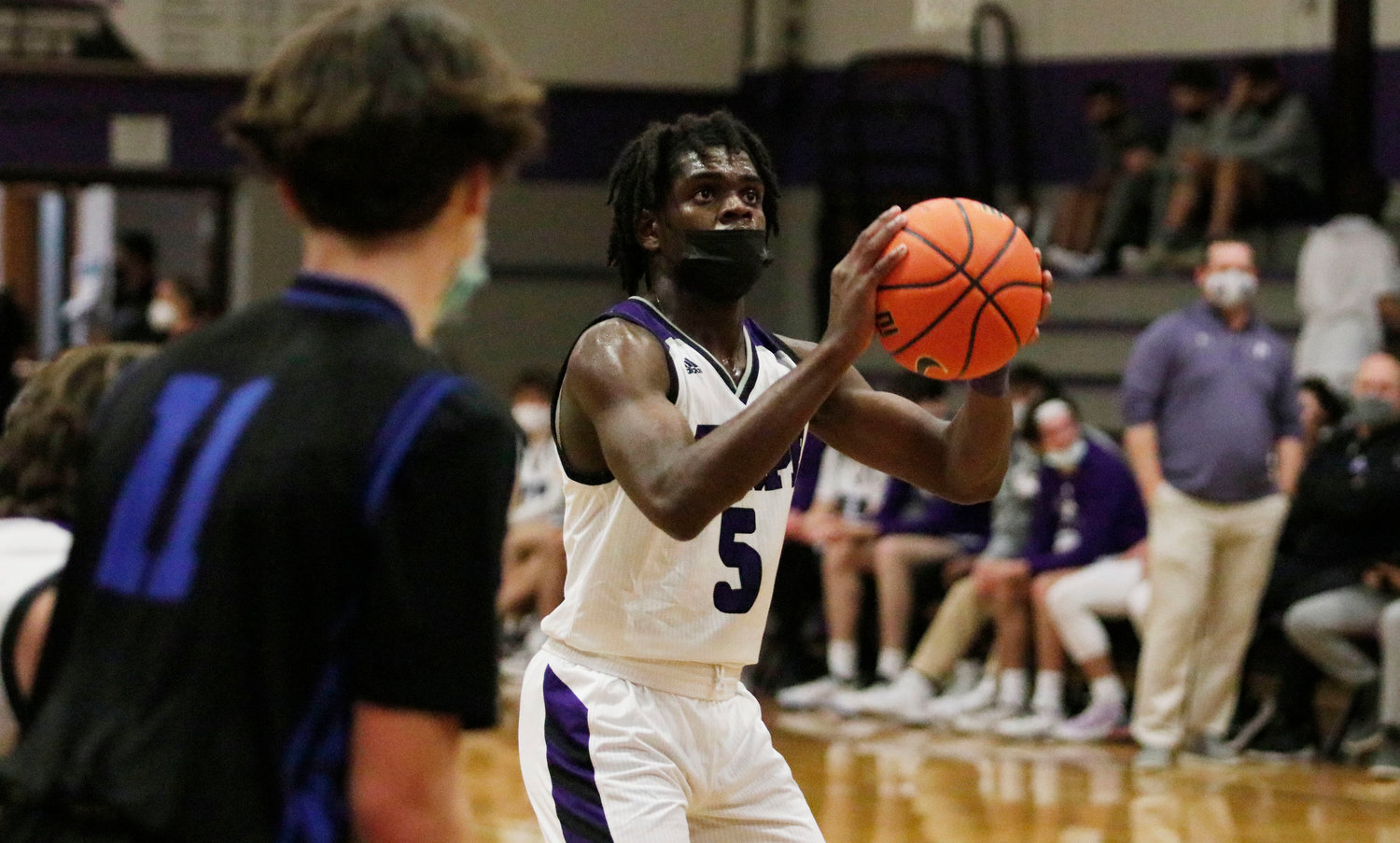 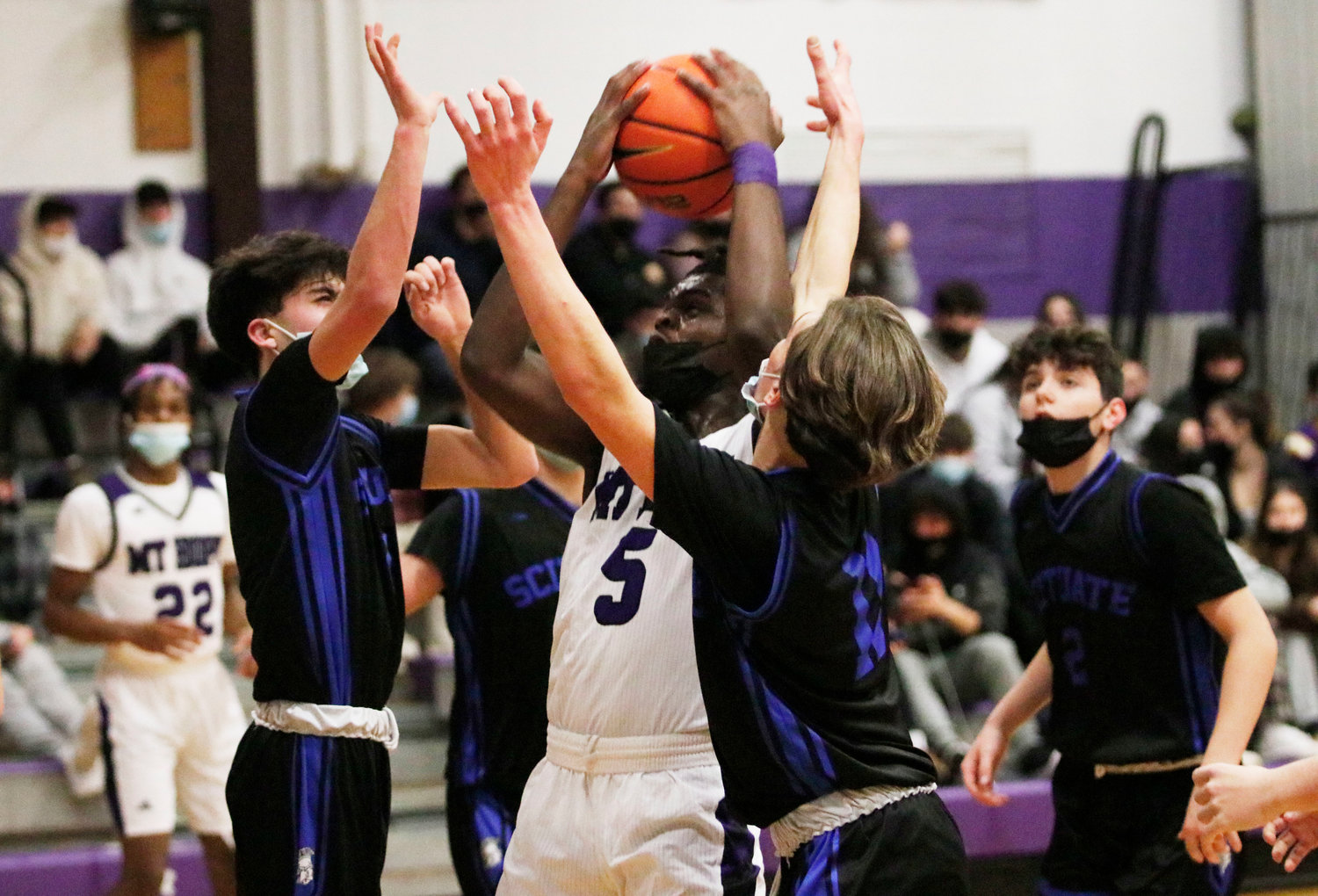 Rick Julien drives the lane for a layup. 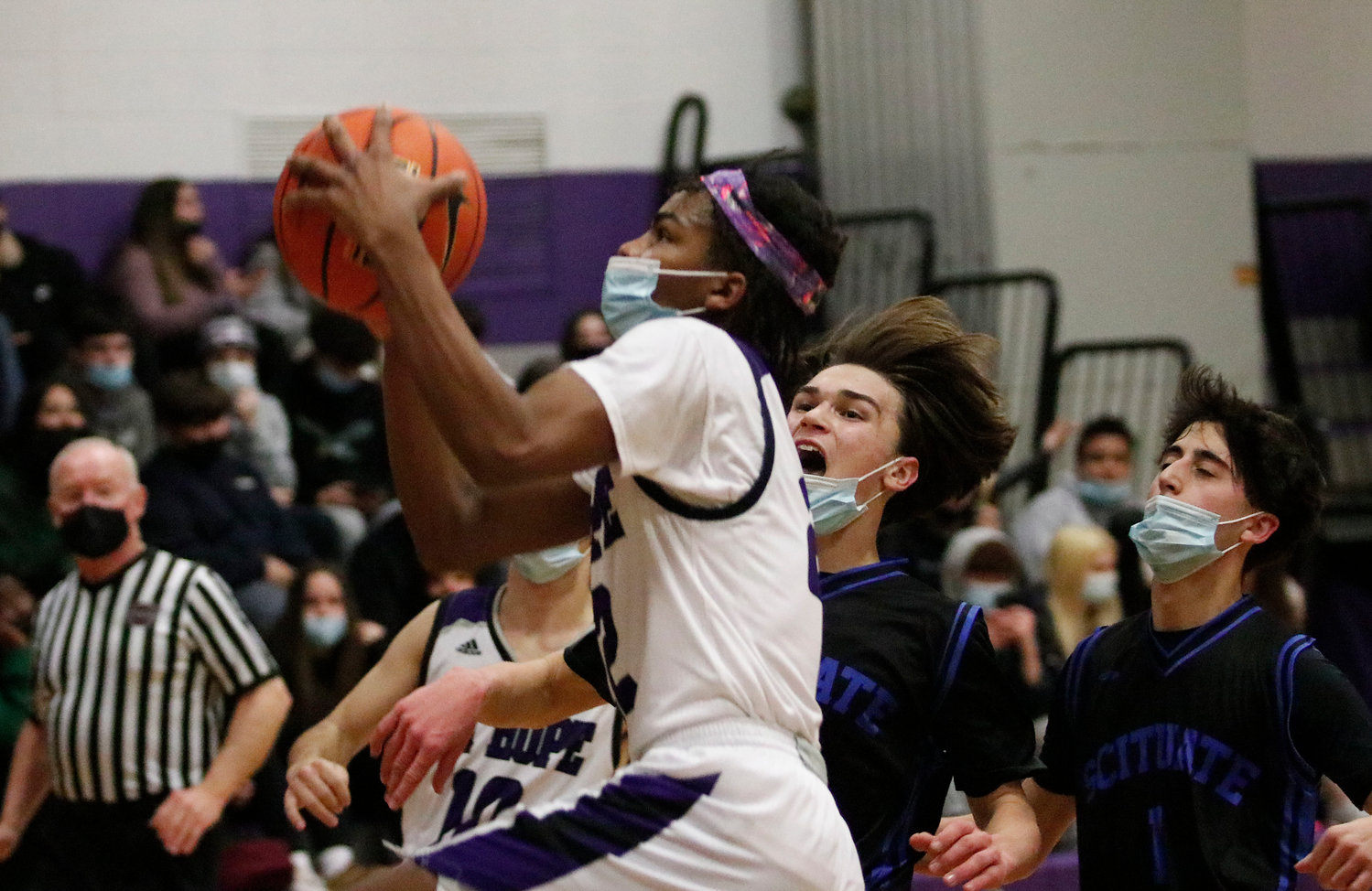 Faceson Hicks drives in for a layup. 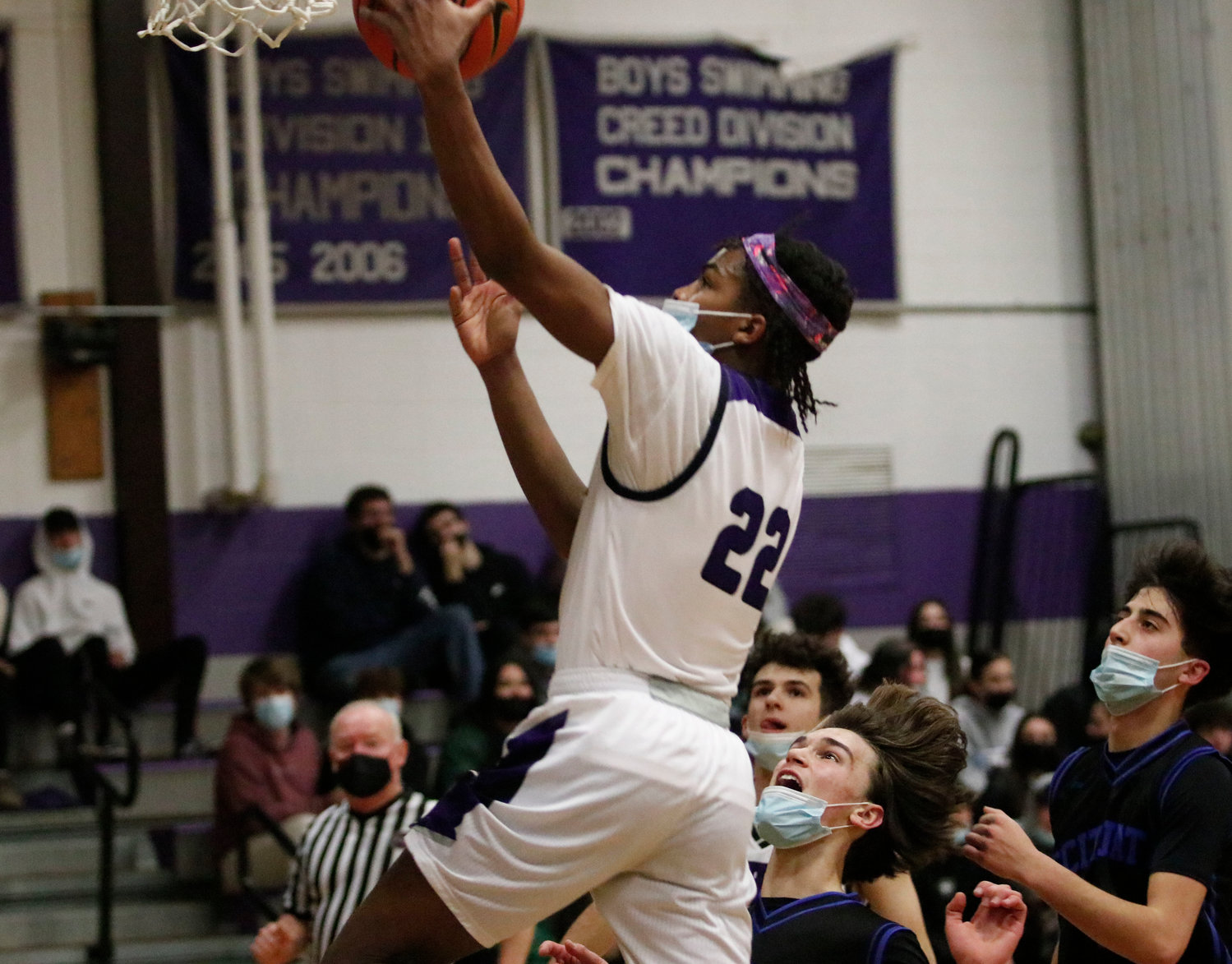 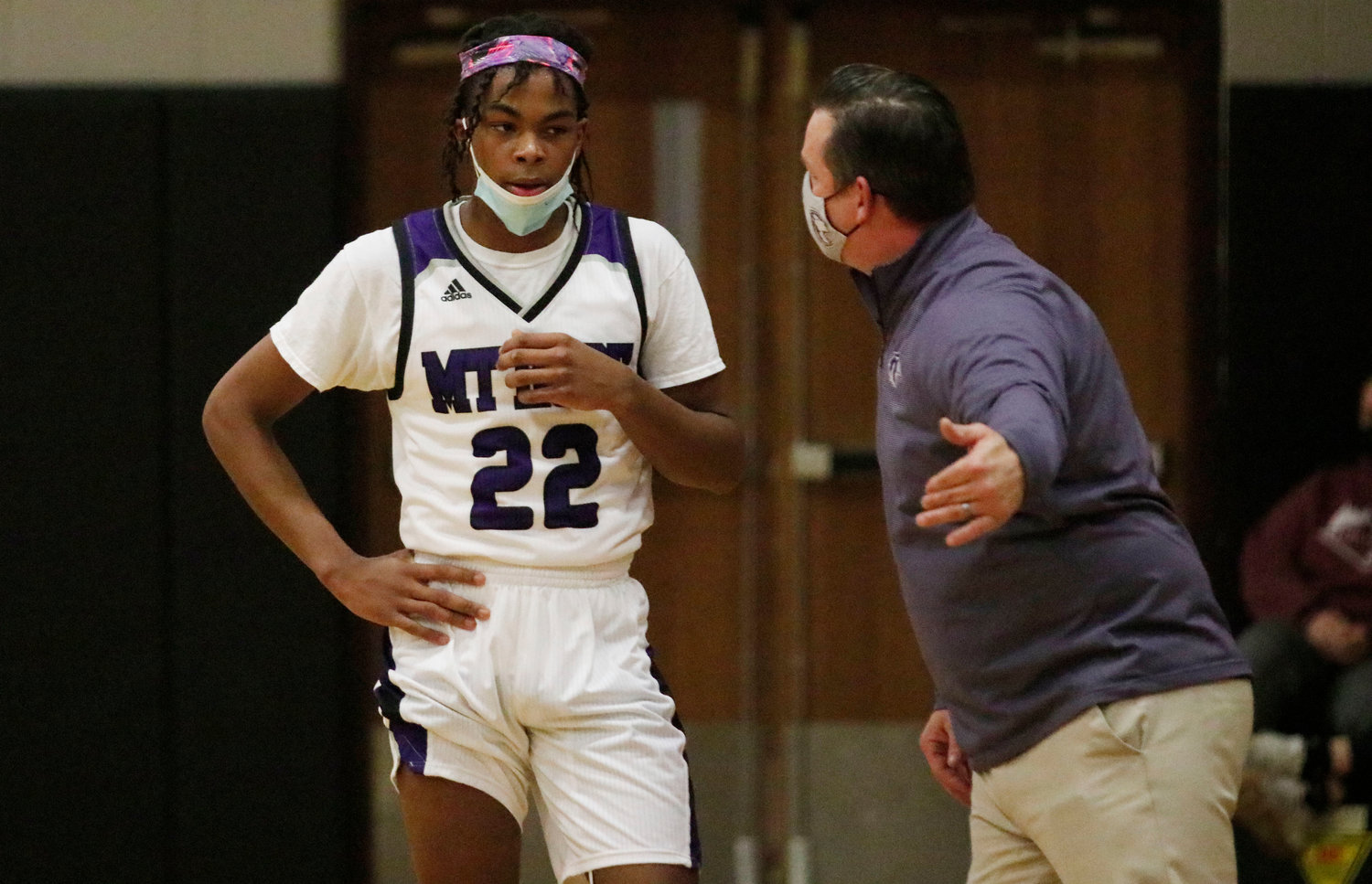 “We are playing better and better, week to week, which is good,” said Huskies head coach Jeffrey Grifka. “They are practicing so hard. And I’m really pushing them. You can see them strong today with a lot of confidence and that’s what we are looking for…”

“Rick works hard down low and gets a lot of rebounds for us,” said Coach Grifka. On Monday, the tall and speedy Julien led the team with 18 points. Bruce McGuire scored 11, Faceson Hicks netted 10, Parker Camelo added 9, Josh deWolf scored 8, James Rustici and Chris Frawley each scored 4, and Clinton Joseph and Tom Nichols each netted 2.

Mcguire a forward, Camelo a guard and deWolf the team’s point guard, are the team’s senior captains.

“Bruce has really been setting the tone for the team. He averages 24-25 points a game,” said Coach Grifka. Josh is the catalyst at point guard. He runs the team. Camelo, Faceon and Rick are always good for about 10 points. They all have been working hard.”

“Our team growth has been incredible,” said McGuire. “We have a great group of guys. We have a strong culture. Everyone is really close and we are really coming together.”

The Huskies led the Spartans 19-12 after the first quarter and put the game away in the second quarter with a barrage of three pointers and in the third quarter with turnovers and fast breaks.

“We are predicated to working inside,” said Coach Grifka. “That’s where we normally score our points. When we have the opportunity to shoot the three we do. We have games where they drop and games where they didn’t drop.”

The Huskies were dropping the threes against Scituate. They sank 8 three pointers through out the game. Dewolf drained two three pointers in the first quarter before a barrage of threes by Julien, Hicks and McGuire in the second gave the Huskies a 37-16 halftime lead.

“We are becoming a three point shooting team very fast,” McGuire said. “It’s something that we weren’t very good at in the beginning of the season. We are good at seeing our weaknesses and improving on them quickly.”

Coach Grifka likes the offense to run in transition. But the threes have been falling for the Huskies as of late and no one is complaining.

“I think that it’s something that you’ll see more of in the future,” said McGuire.

“We like to get up and down the court quick,” said Coach Grifka. “Get those transition points and set the tone.”

“They worked hard. Capitalized and ran the offense like they know they can,” said Coach Grifka.

“Everyone knows their role,” said McGuire. “We got players that get a ton of rebounds. Draw fouls. Facilitate the ball really well.”

The Huskies head coach emptied his bench in the fourth quarter Hicks and Frawley each added three pointers Joseph and Nichols each hit jumpers as the Huskies scored 11 points in the final quarter.

“My teammates stepped up,” said McGuire. “They hit shots and we pulled off a 35 point win. That’s a good feeling.”

“We have some important games coming up,” Coach Grifka said. The Huskies travel to St. Patrick Academy on Wednesday and second place Ponaganset on Friday as the team gets ready to play six games in two weeks. “It’s going to be a tough run. But the team is working hard and I’m glad we are getting games in,” Coach Grifka said.