A harrowing encounter on High Street in Bristol ended peacefully Wednesday morning, as Bristol and Rhode Island State Police were able to apprehend a 32-year-old suspect who fired multiple shots from … 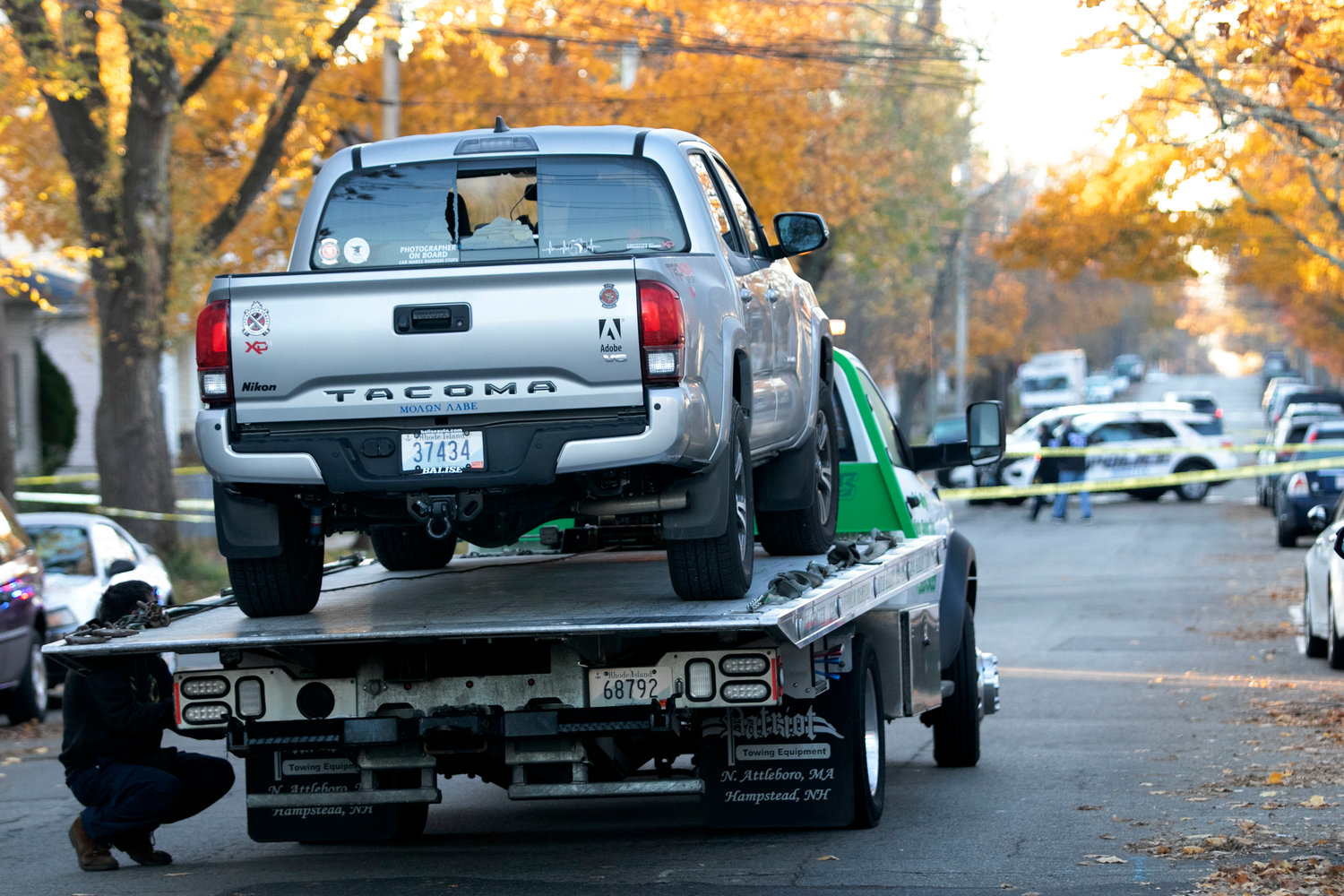 A truck is towed away from the scene of the incident, showing visible damage from gunshots fired in the owner’s direction by a resident of a High Street apartment building.
Richard W. Dionne Jr. 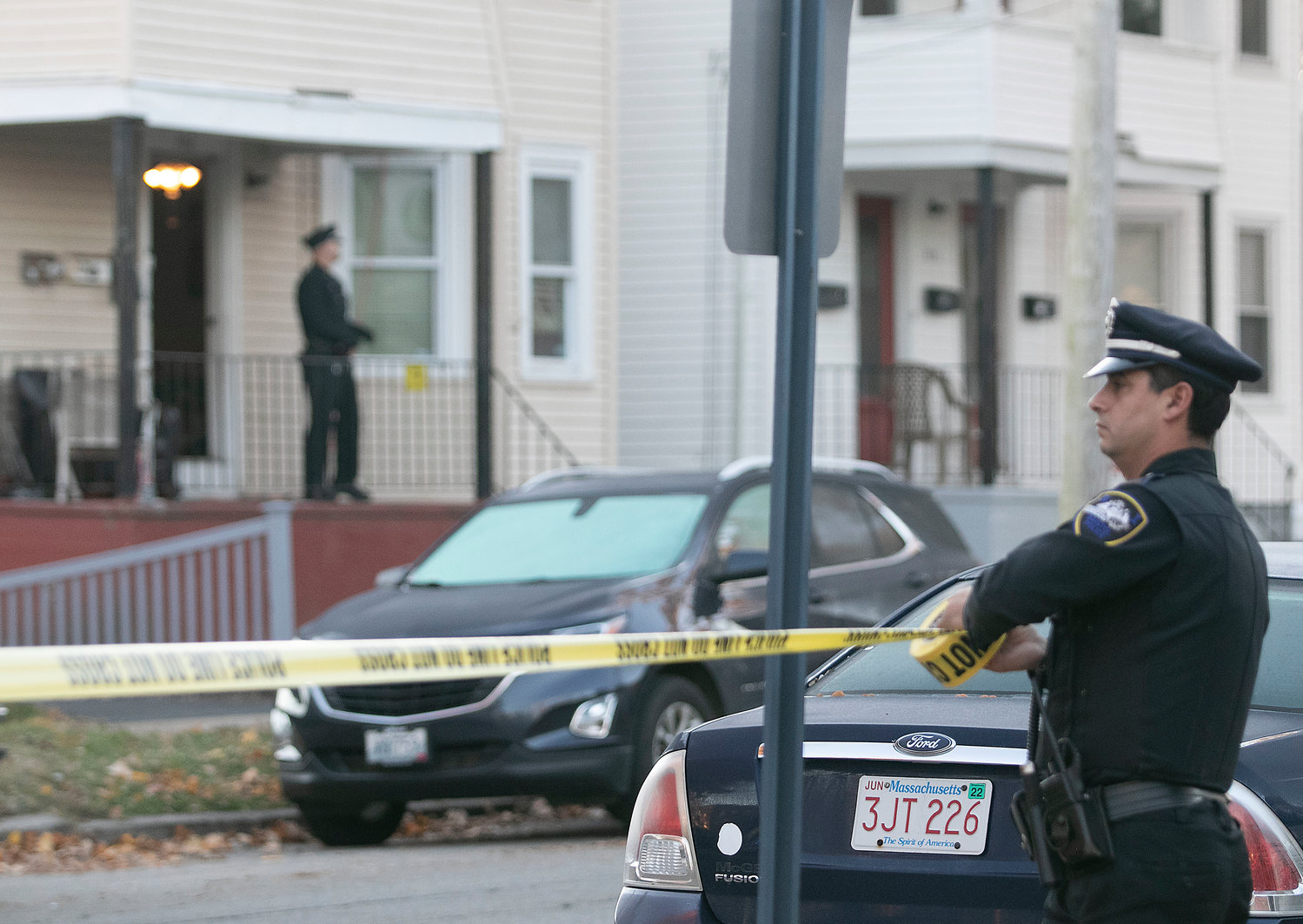 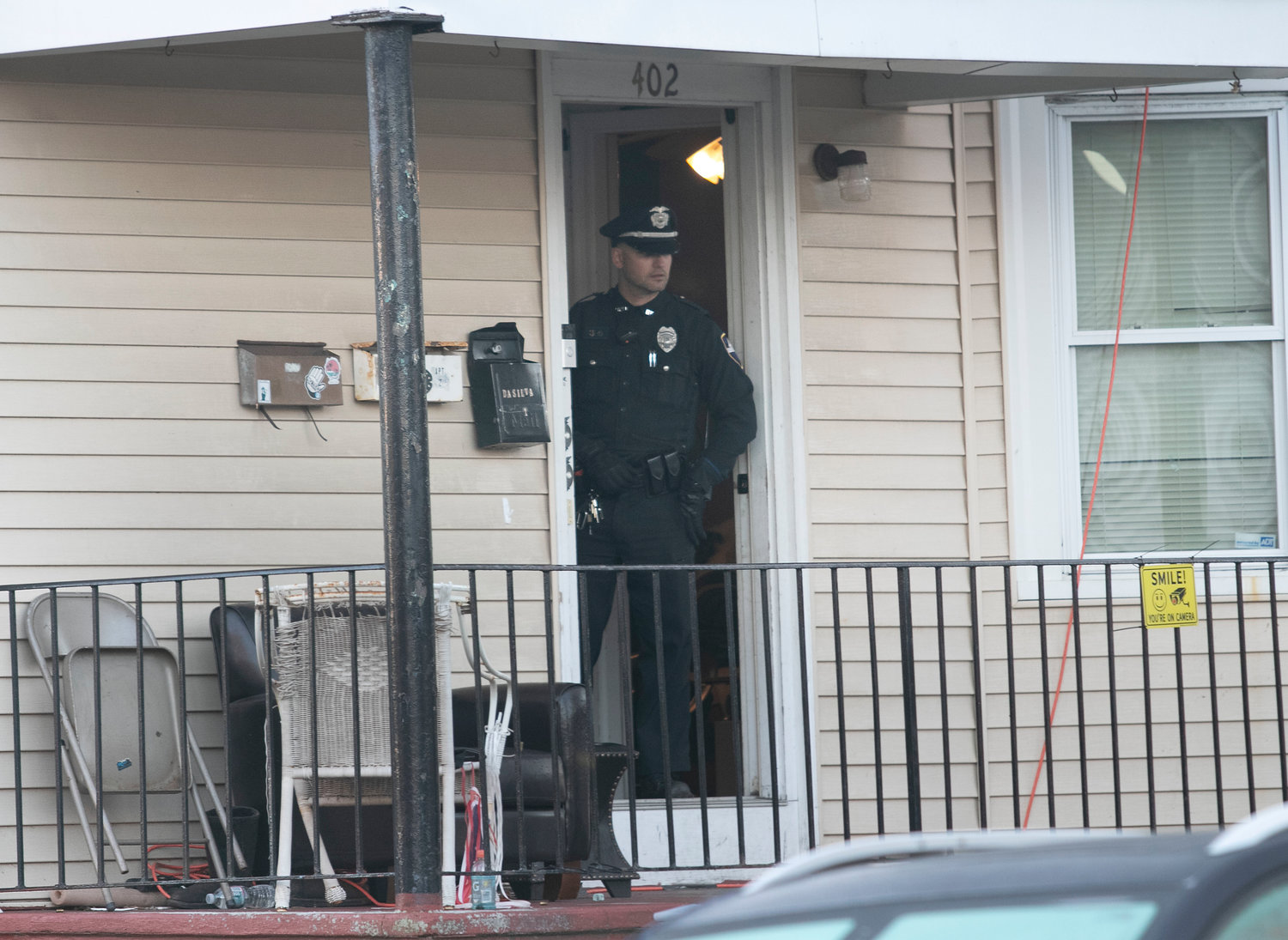 Police inside the residence at 402 High Street where the shooter emerged with a rifle to fire upon the man, who was on the phone with police at the time.
Richard W. Dionne Jr. 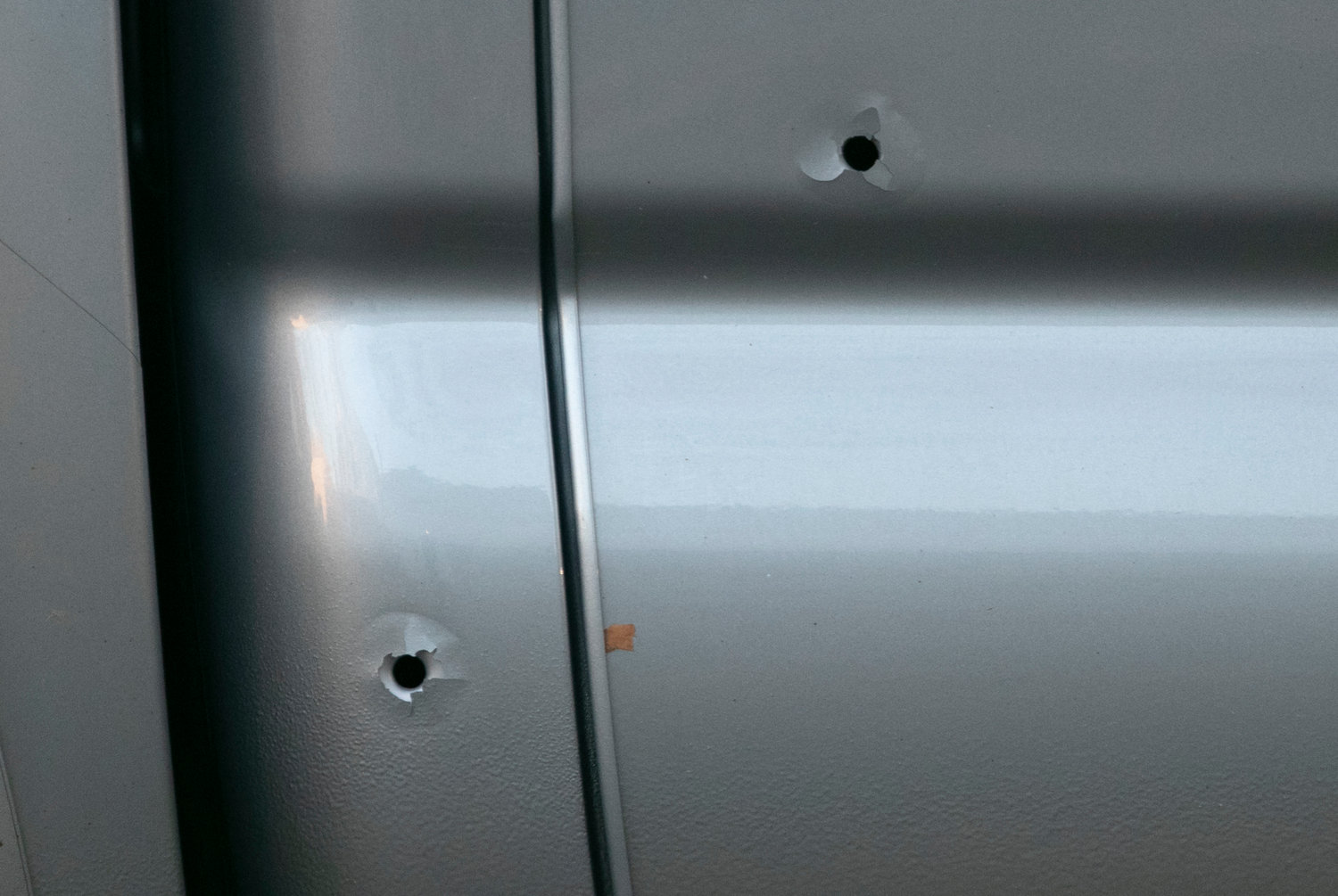 Bullet holes are seen on the exterior of the truck belonging to the witness who had called police on what he felt was an ongoing domestic incident.
Richard W. Dionne Jr. 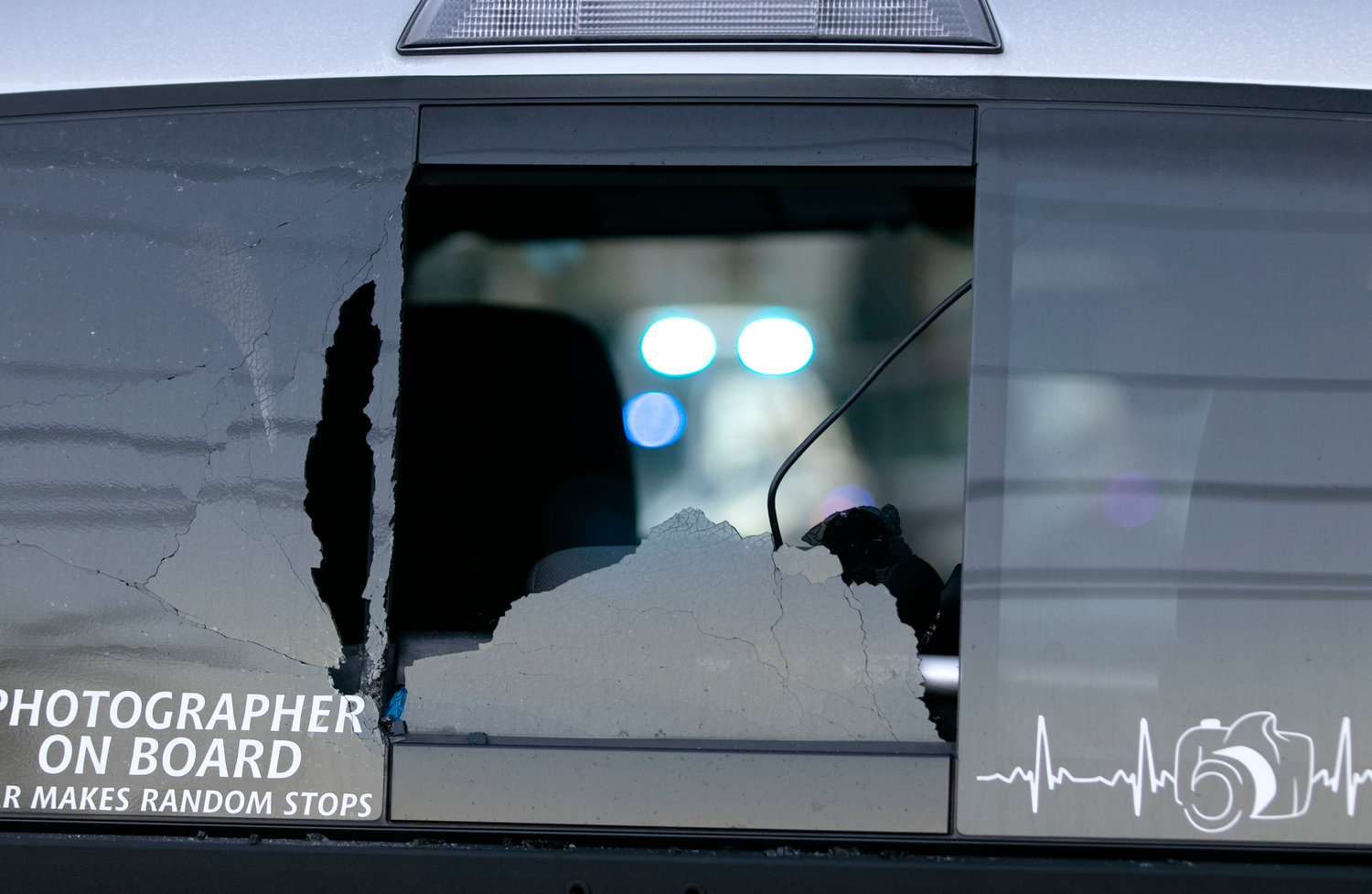 A bullet from the suspect's gun shot through the back glass of the witness's truck, nearly striking him in the shoulder area but ultimately missing him.
Richard W. Dionne Jr.
Previous Next
Posted Wednesday, November 17, 2021 10:19 am
By Ethan Hartley

A harrowing encounter on High Street in Bristol ended peacefully Wednesday morning, as Bristol and Rhode Island State Police were able to apprehend a 32-year-old suspect who fired multiple shots from a rifle at a man seated inside his truck.

According to Bristol Police Major Brian Burke, the department’s dispatch received a call from a male subject around 1:30 a.m. Burke said the man believed he was witnessing a domestic dispute occurring between a man and a woman inside a vehicle in the area of High and Oliver Streets. He decided to follow the vehicle and call police.

While the caller was on the phone with dispatch attempting to gather more information about the vehicle and the occupants inside, the caller witnessed the man he was observing enter a residence at 402 High Street, come back outside of the building with a rifle, and that he began shooting at him multiple times, which shattered his back glass and nearly struck him in the shoulder.

“Police immediately converged on the home,” Burke said. They set up a perimeter around the immediate area and the exterior streets and contacted the Rhode Island State Police’s Tactical Response Team. Meanwhile, Bristol police were able to safely evacuate tenants from the second and third floor of the residence.

While waiting for the state police, Bristol police also contacted the Bristol Warren School administration, which delayed the openings of Colt Andrews and Guiteras Elementary Schools by two hours. Our Lady of Mount Carmel School also delayed its opening.

At around 6 a.m., Burke said the tactical team approached the house in an armored vehicle and attempted to make contact with the suspects on the first floor.

“After a couple of minutes, a gentleman exited and was taken into custody,” said Burke.

The suspect was identified as Ari Brisbon, a 32-year-old Bristol resident of the aforementioned address. Burke said at this time he was unaware of any past incidents with police including Brisbon. He is set to be arraigned in Providence County District Court this afternoon, and will face charges of:

The woman involved in the incident was also brought into custody but was not arrested. Burke said that detectives are continuing to process the scene, and that the incident was isolated and there is no further danger in the area.